From Print to Ebook for Cry of the Kiwi: A Family’s New Zealand Adventure 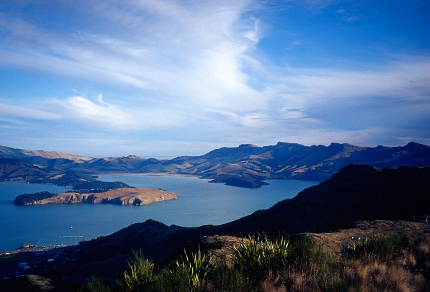 Ever wondered how to convert an image-heavy Print On Demand book into an e-pub file? This post outlines challenges I faced in going from print to e-book for Cry of the Kiwi: A Family’s New Zealand Adventure, and my solutions!

“From print to e-book for Cry of the Kiwi” has been my mantra since my husband, Vilis, and I returned from South Africa in late December.

In 2015, I independently published my book trilogy, Cry of the Kiwi: A Family’s New Zealand Adventure, in print format. Due to the popularity of e-books, I decided to also release Cry of the Kiwi in electronic format available at all major digital book retailers.

Then South Africa happened! The day after I launched the Cry of the Kiwi trilogy in print, Vilis and I left Canada to spend six months in a land of rock and thorn and amazing wildlife. Caught up in South African adventures and distracted by the country’s glorious birds, I put Cry of the Kiwi on the back burner.

Now that I’m home, Cry of the Kiwi is cooking on the front burner, and that burner is hot! Before I launch into the challenges of transforming my print-intended manuscript to an electronic-friendly one, let me provide a little background on the trilogy itself. 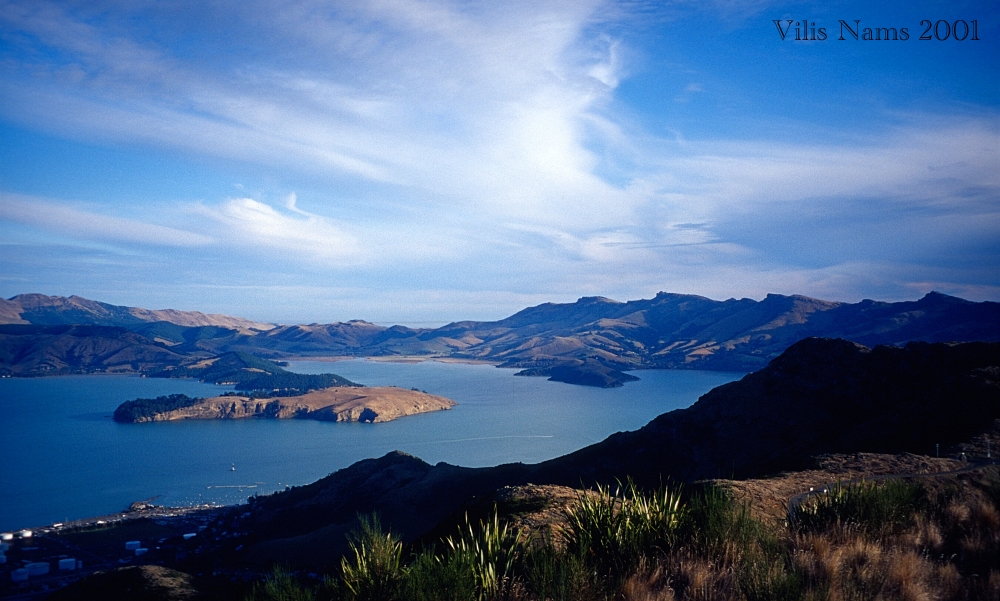 New Zealand is a small country with a wealth of spectacular landscapes brought to the world’s attention through Peter Jackson’s epic Lord of the Rings and The Hobbit movie trilogies. Vilis, I, and our two sons happened to be living in New Zealand during the filming of The Two Towers, second movie in the Lord of the Rings trilogy. We weren’t in “Middle Earth” because of elves and dwarves and hobbits, but because Vilis had a short-term research position assisting Landcare Research in its efforts to rid New Zealand of stoats. Introduced to New Zealand in the nineteenth century, stoats are Old World weasels that have had a devastating impact on New Zealand’s native birds. My family spent ten-and-a-half months in New Zealand, during which we drove quads on muddy tracks while live-trapping stoats, hiked hundreds of kilometres of tracks, and immersed ourselves in the homeschooling fieldtrip of a lifetime. Those experiences formed the basis of the three books that comprise my very own New Zealand trilogy: Once a Land of Birds, This Dark Sheltering Forest, and Tang of the Tasman Sea. (Click on photos to enlarge.)

When I embarked on the “from print to e-book for Cry of the Kiwi” project, I decided my first retailer would be the online giant, Amazon. I created an account with Amazon’s Kindle Direct Publishing and uploaded the book cover for Once a Land of Birds quickly and easily. However, uploading a reader-friendly manuscript was  another story. Vilis and I quickly discovered that electronic book format is an entirely different animal from print format. 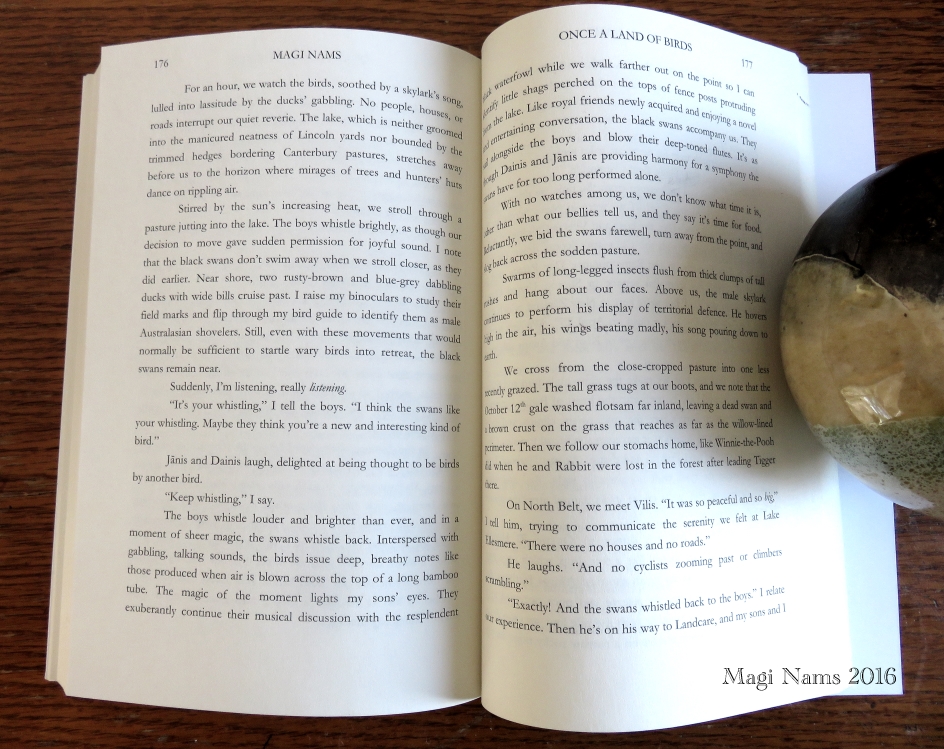 Once a Land of Birds in Print (© Magi Nams) 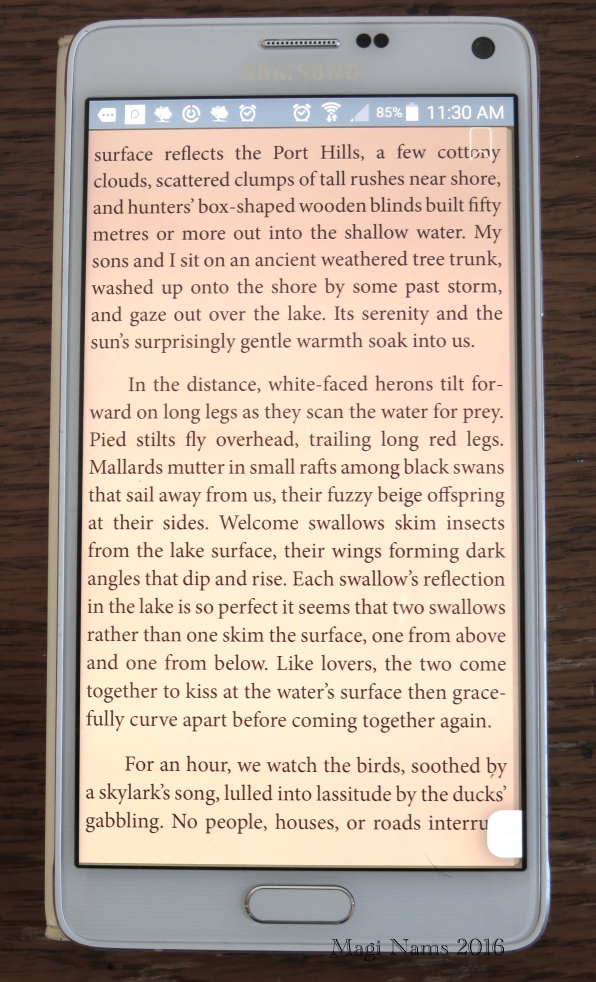 Once a Land of Birds on Screen (© Magi Nams)

To create my physical book, which is printed on demand when customers order it, I had uploaded a Microsoft Word document to Amazon’s CreateSpace self-publishing company. To create an e-book, Vilis used a file conversion program called Calibre to transform that Word file into an e-pub file. The result wasn’t pretty. Some blocks of text were the wrong font size. There were huge blank spaces here and there. The map was a complete disaster, compressed into a narrow band. Photographs were tiny, extending only a third of the way across the preview screen. Small capitals in photograph captions and entry leads had been changed to lower case letters. And so on.

Thank goodness Vilis is a computer whiz! I let him deal with the nuts and bolts of fixing up the messy map and photograph files while I focused on overall book appearance.

What is reader-friendly and easy on the eye in a print book is not necessarily so in an e-book. On a small screen, everything is magnified. The .5″ paragraph indents in my print book looked gigantic and distracting on my smart phone screen. I decreased indents to .2″. Text enclosed in parentheses was intrusive. I deleted or reworked most parenthetical text, using commas. On my phone screen, without the benefit of margins to give the eye a rest, paragraphs flowed in a tedious stream. After studying the e-book version of Under the Tuscan Sun, I inserted a line after each paragraph, which breaks up the unending stream and affords the reader some space.

In addition to the regular text in Once a Land of Birds, I’ve included supplemental information in sidebars, endnotes to document cited references, and photographs interspersed throughout the book to illustrate New Zealand landscapes and our adventures. All of these are easily viewed in the print format of the book, but adjustments had to be made for the e-book format.

In the print version of Once a Land of Birds, sidebars containing supplemental information are boxed, and readers can easily skip over them if they wish. However, in the original e-pub file, the sidebars were part of the seemingly unending stream of information I described earlier. While previewing the e-book, I was suddenly plunged into a sidebar, not knowing when it would end and not easily able to skip it. I knew e-book readers would find this annoying, so I put my thinking cap on and came up with the idea of placing the sidebars at the end of the manuscript. Vilis showed me how to insert hyperlinks to link sidebar titles within the manuscript to the boxes at the end. It’s like magic! 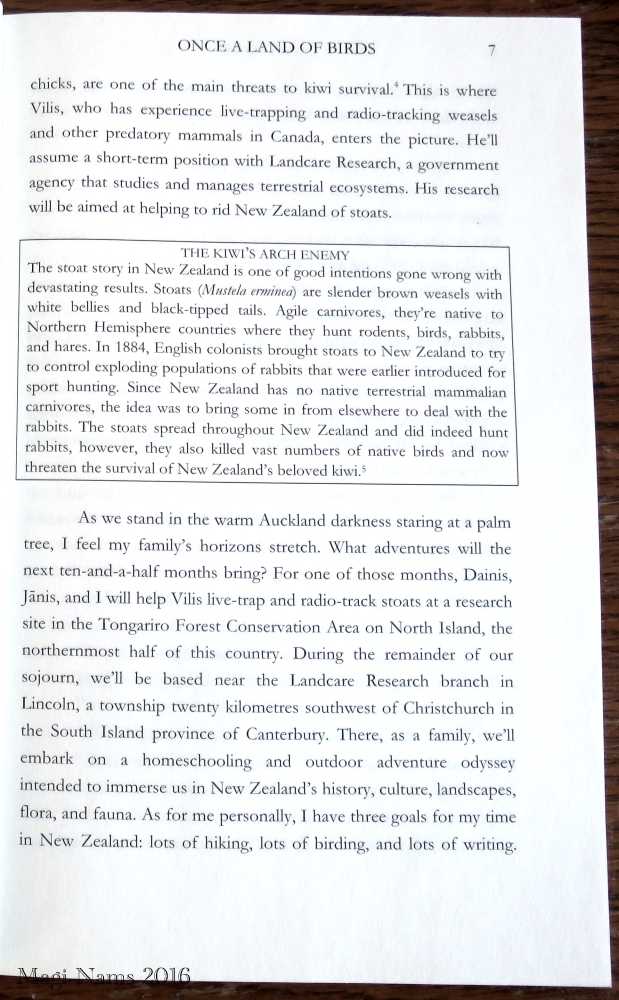 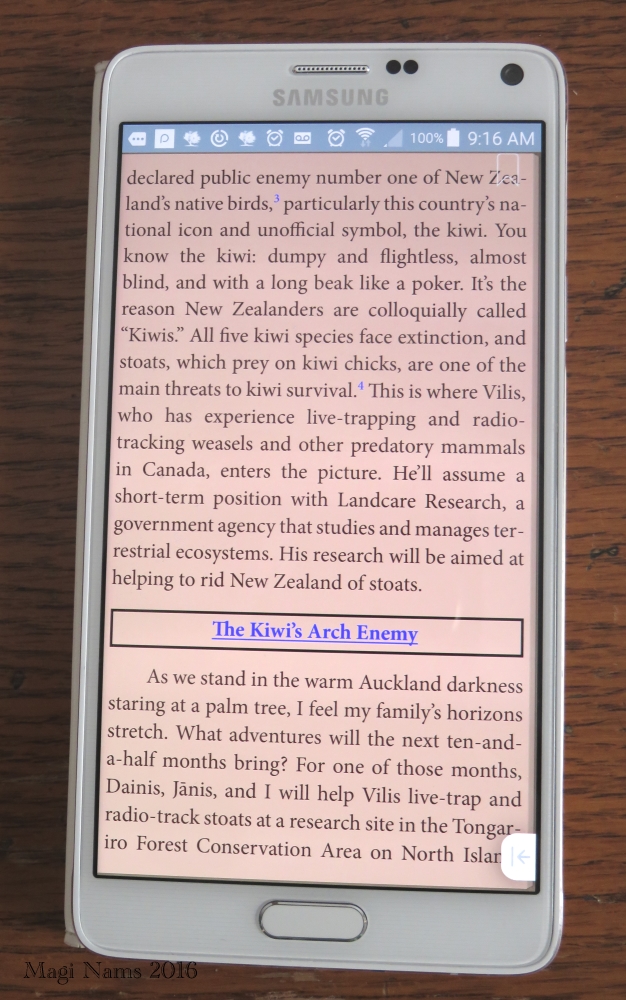 Sidebar Hyperlink in Once a Land of Birds (© Magi Nams) 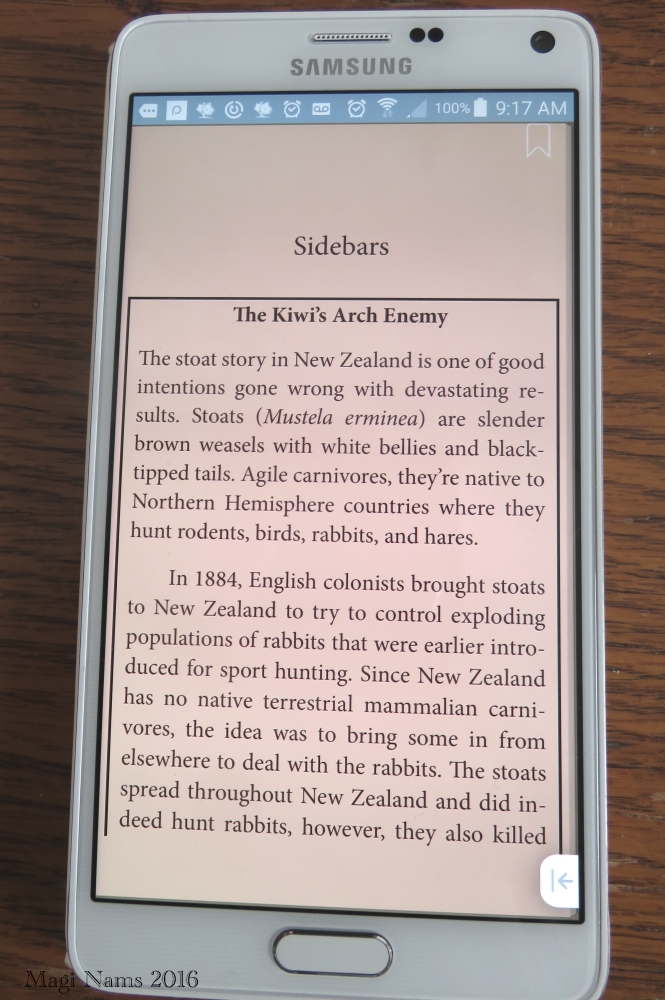 Sidebar at End of Once a Land of Birds (© Magi Nams) 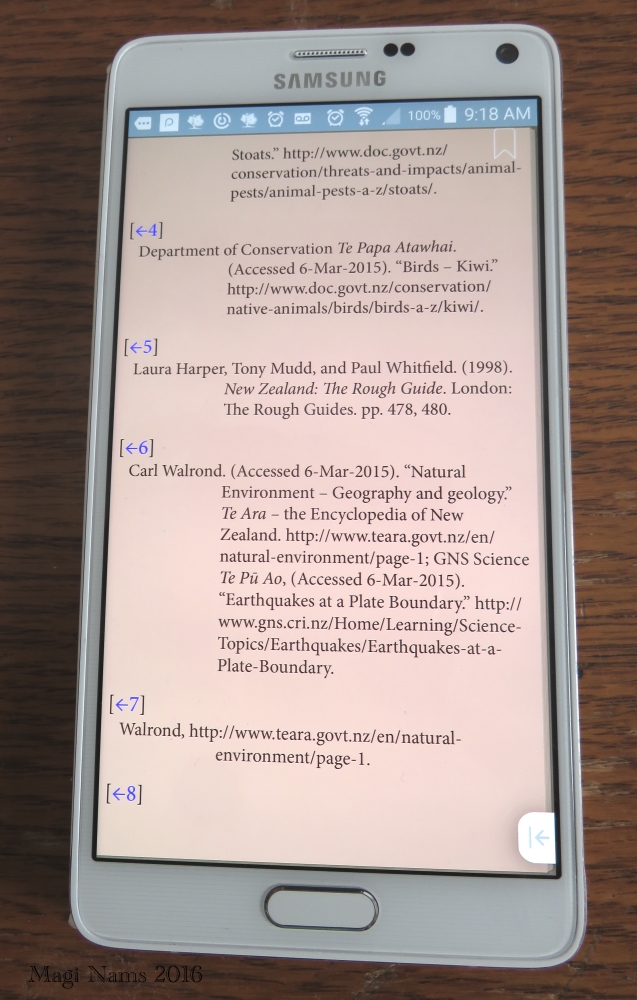 Endnotes in Once a Land of Birds (© Magi Nams)

In the print format of Once a Land of Birds, numeric superscripts (see left photo above) indicate endnotes that correspond with reference citations at the end of the book. When Vilis converted the print format Word document to an epub file, those tidy superscripts became text-sized numbers on the same line as the text. I found them confusing. Vilis hit on the idea of using hyperlinks to connect the superscripts (see small blue numbers in centre photo above) with the citations and, voila! Tidy endnotes.

Each of my Cry of the Kiwi books contains more than forty photographs. Once a Land of Birds has forty-six. This bounty of images has been the single biggest obstacle to completing the print-to-e-book transformation. I could have chosen to not include the photographs, a decision that would have saved Vilis and me many headaches and decreased my e-pub file size tremendously. (File size is important because Amazon will take a cut of fifteen cents per megabyte out of my royalty every time a customer downloads my book.) However, I want readers of my e-book Cry of the Kiwi trilogy to be able to enjoy the images that are in the print format books.

The question became how to import the photographs into the e-pub file at a size and resolution that wouldn’t max out the file size and break me at the bank. Through much trial and error (let me emphasize that: much trial and error), Vilis and I developed a plan that needs only a few more tweaks. I owe Joanna Penn of The Creative Penn a huge thank you for her suggestion to non-fiction authors to not include images in e-books, but rather, to link images to their websites. What I’ve chosen to do is include a thumbnail photo in the text to give readers an idea of what the image is about, plus a photograph caption hyperlink. Press the hyperlink, and the photograph downloads and spreads across your screen. Amazing! 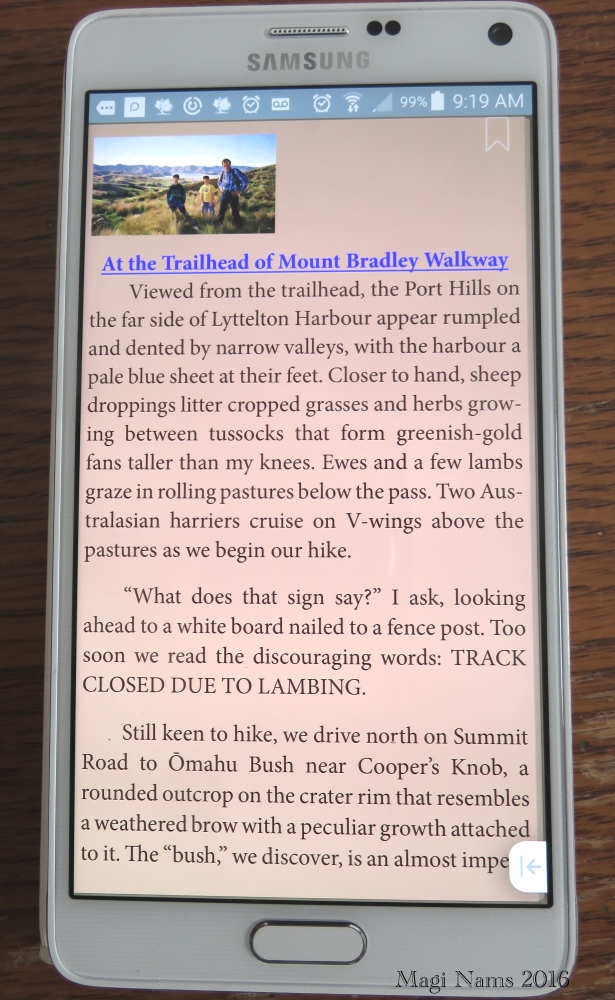 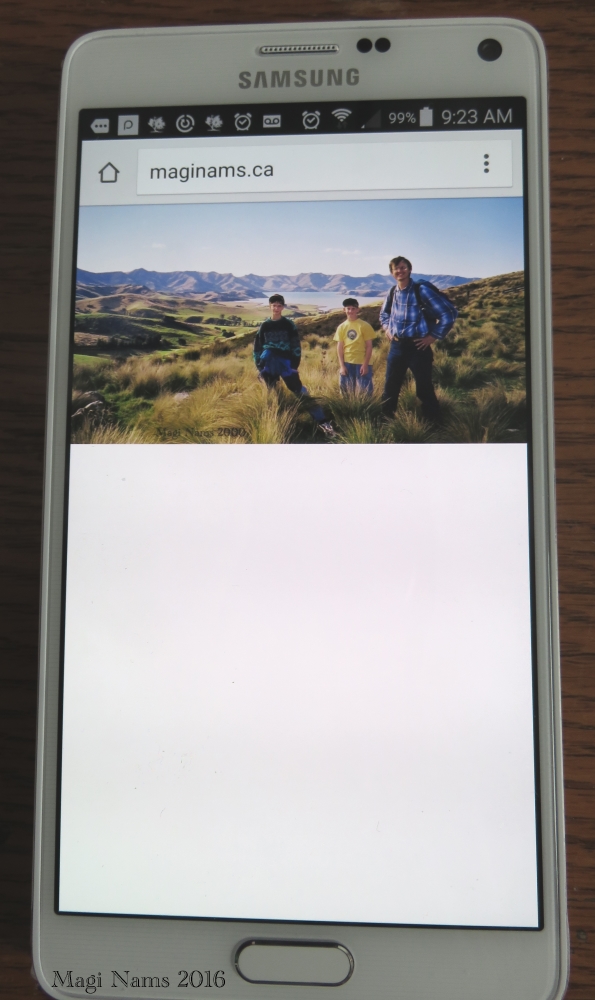 Photograph Enlargement to Full Screen, in Once a Land of Birds (© Magi Nams)

Because colour printing (too expensive for my print format books) isn’t an issue, the e-book images will be available in colour. I just have to keep that file size down, which is the part we’re tweaking!

Launch date for ebook Once a Land of Birds

I’ve given myself a deadline! The e-book version of Once a Land of Birds will officially launch into cyberspace on March 25, 2016 and will be available at all major online retailers.  After that, it’s onward to This Dark Sheltering Forest and Tang of the Tasman Sea!

If you have comments or questions, fill in the comments box  below. I’d love to hear from you! 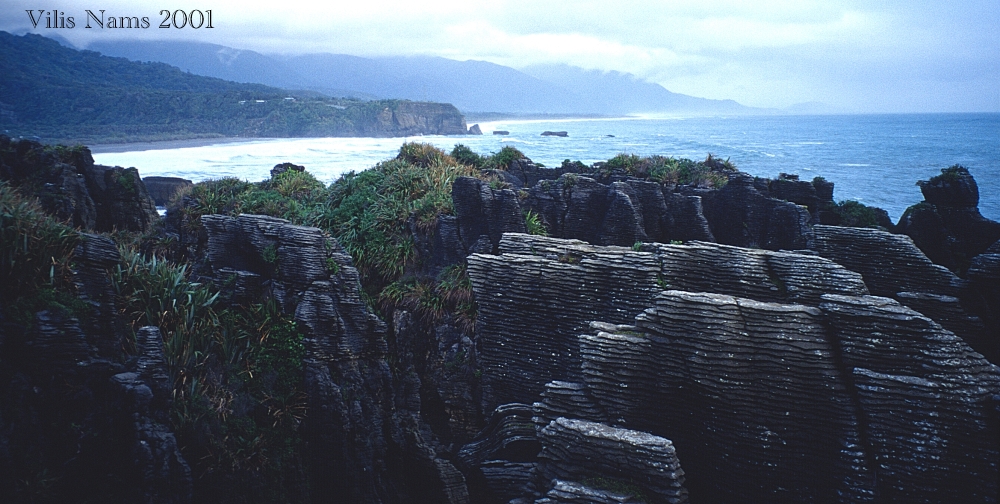