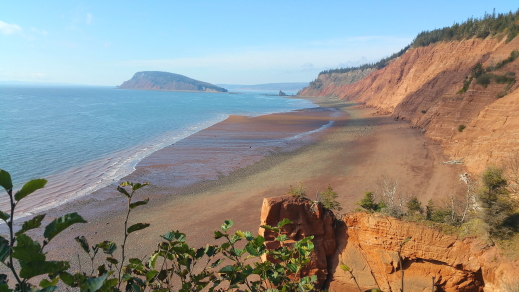 Five Islands Provincial Park is a protected area of mixed-wood forest located on the north shore of the Bay of Fundy’s Minas Basin in northern Nova Scotia. Accessed via Highway 2 (at 618 Bentley Branch Road), the park lies 24 km east of Parrsborro and about 70 km northwest of Truro. It offers seasonal camping facilities, 10 km of moderate hiking trails (see map), and spectacular views of 90-metre red-rock cliffs being gradually eroded by the highest tides in the world. 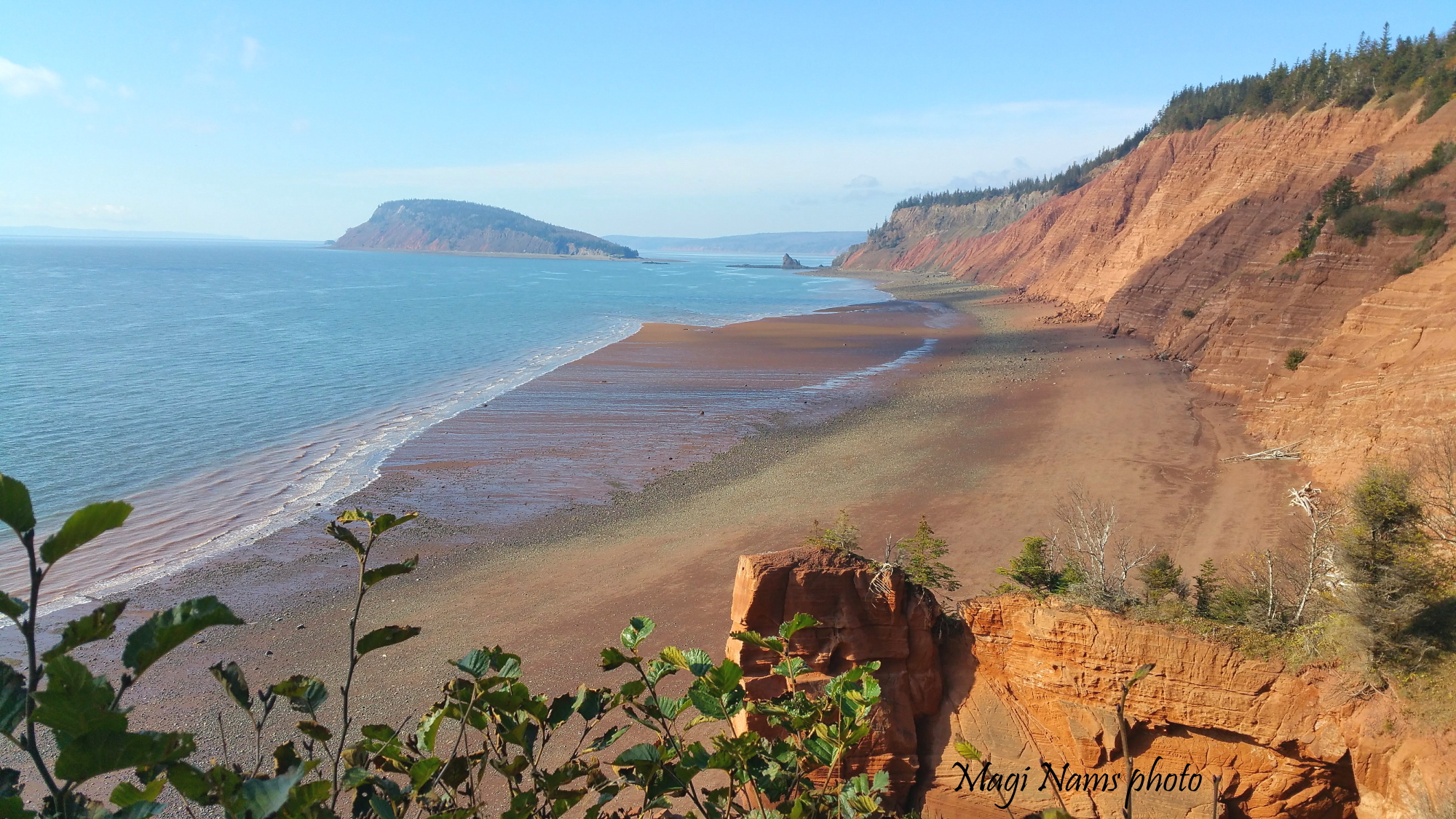 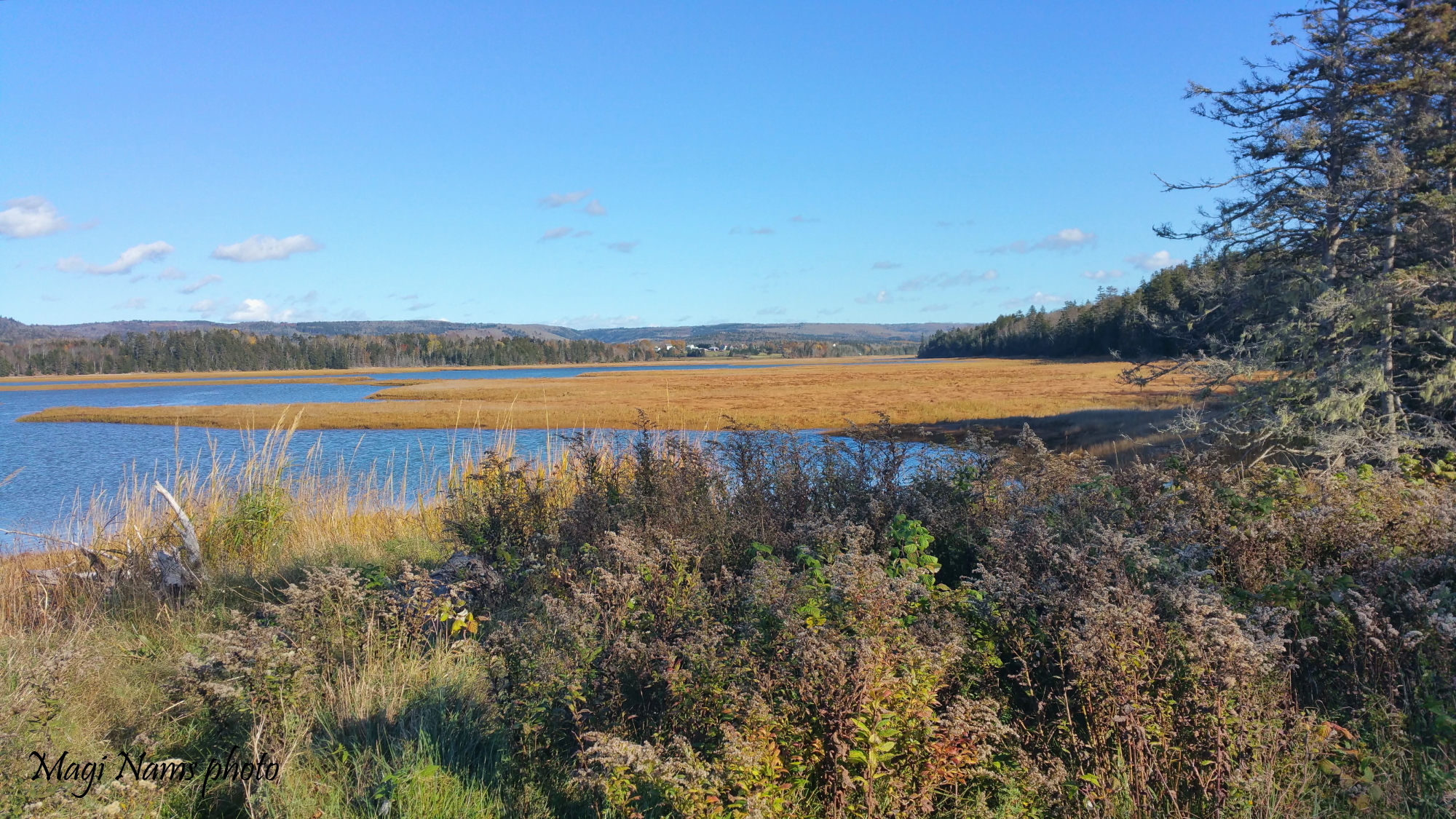 For our hike last week, we parked in the small parking loop near the park’s closed gate, then located the trailhead for the Economy Mountain Trail on the south side of the access road near the gate. Fog that had dogged us during the drive from Tatamagouche over Folly Mountain had dissipated as we drove along the coast, leaving us with cloudy skies for the mid-morning start of our hike.

Right from the trailhead, the Economy Mountain Trail took us upslope through mixed forest and got our legs working hard and our hearts pounding. The cheerful-sounding “dee-dee” of black-capped chickadees accompanied us as we worked our way upward, skirting muddy patches on the trail. We paused to enjoy a pair of golden-crowned kinglets flitting in the forest canopy and voicing their high-pitched “tsee-tsee-tsee” calls. Mosses and still-green ferns brightened the forest floor, and fallen leaves of birches and maples rustled underfoot. The trail led us over the western shoulder of 226-metre Economy Mountain (with the path’s highest elevation reaching ca. 150 metres), then downslope to the junction with Red Head Trail, about 2.7 km from the Economy Mountain Trail trailhead. (Note that the map below shows trail sections not shown on the park website’s trail map.) 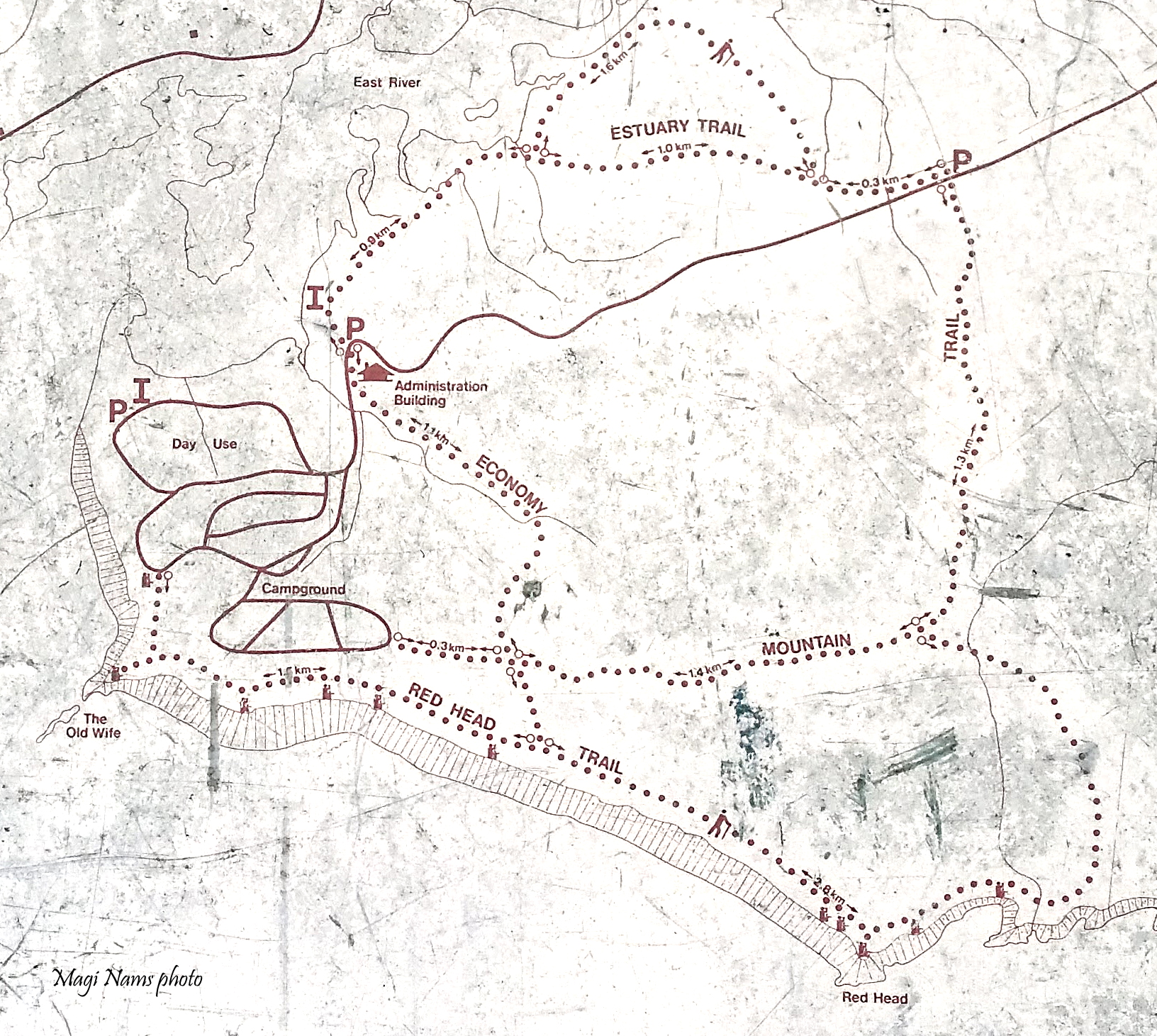 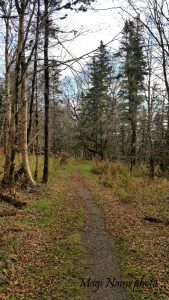 Red Head Trail took us through open woodland, then along the top of an escarpment overlooking the Minas Basin, with views of Moose Island to the west and Red Head to the east visible through openings in the escarpment vegetation. Clearings punctuated by tall snags had a ground cover of gone-to-seed goldenrod and other meadow plants. Occasional high-bush cranberry shrubs dotted the clearings, their red berries’ sweet-fruity aroma wafting on the air. 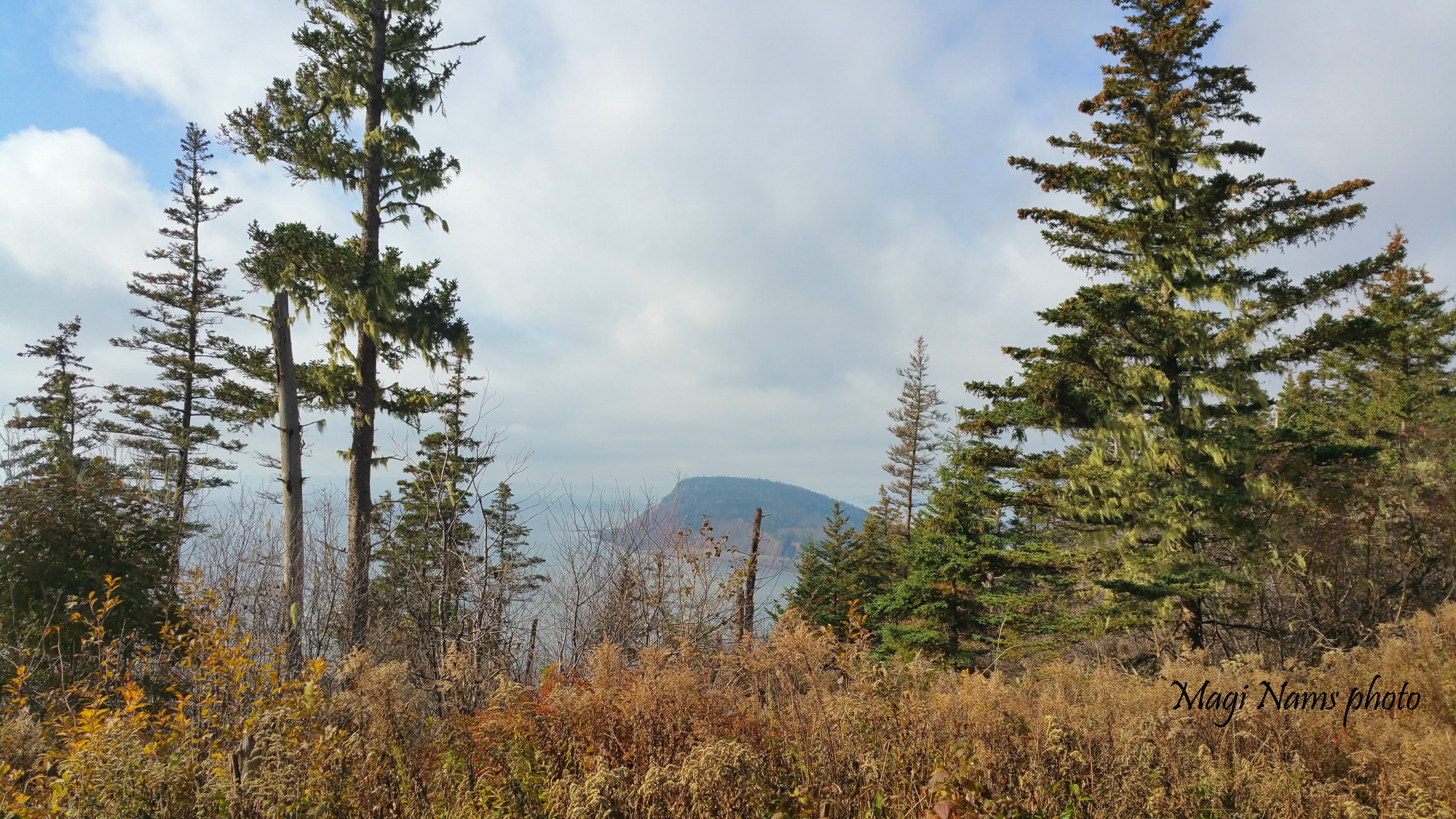 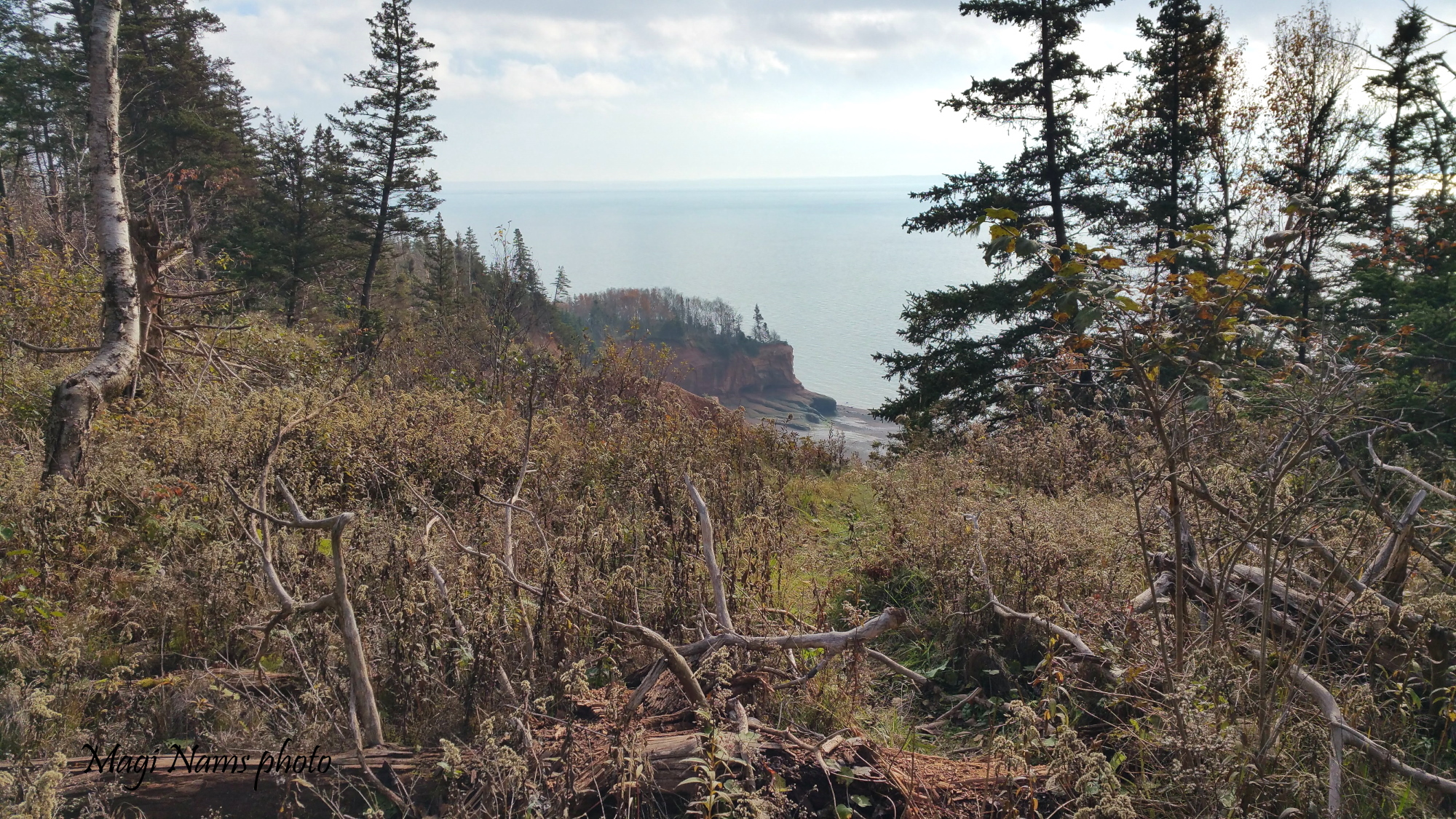 Cloudy skies gave way to sunshine and unseasonably warm temperatures that had us peeling off our outer layers of clothing. (In comparison, in 2019 Nova Scotia received its first major snowfall of the year on the same date, November 9.) Red squirrels chattered, declaring their territorial ownership, and three ruffed grouse flushed from the ground and perched within the cover of spruce trees. We heard and saw more chickadees, and a small flock of American goldfinches flew overhead, voicing their “po-tato-chip”-like flight call. A huge eagle, backlit by the sun, winged along the shoreline.

We paused to picnic at one of the viewpoints along the trail, then hiked a short distance farther to the small loop at the end of Red Head Trail that overlooks more red sea-cliffs in the distance. 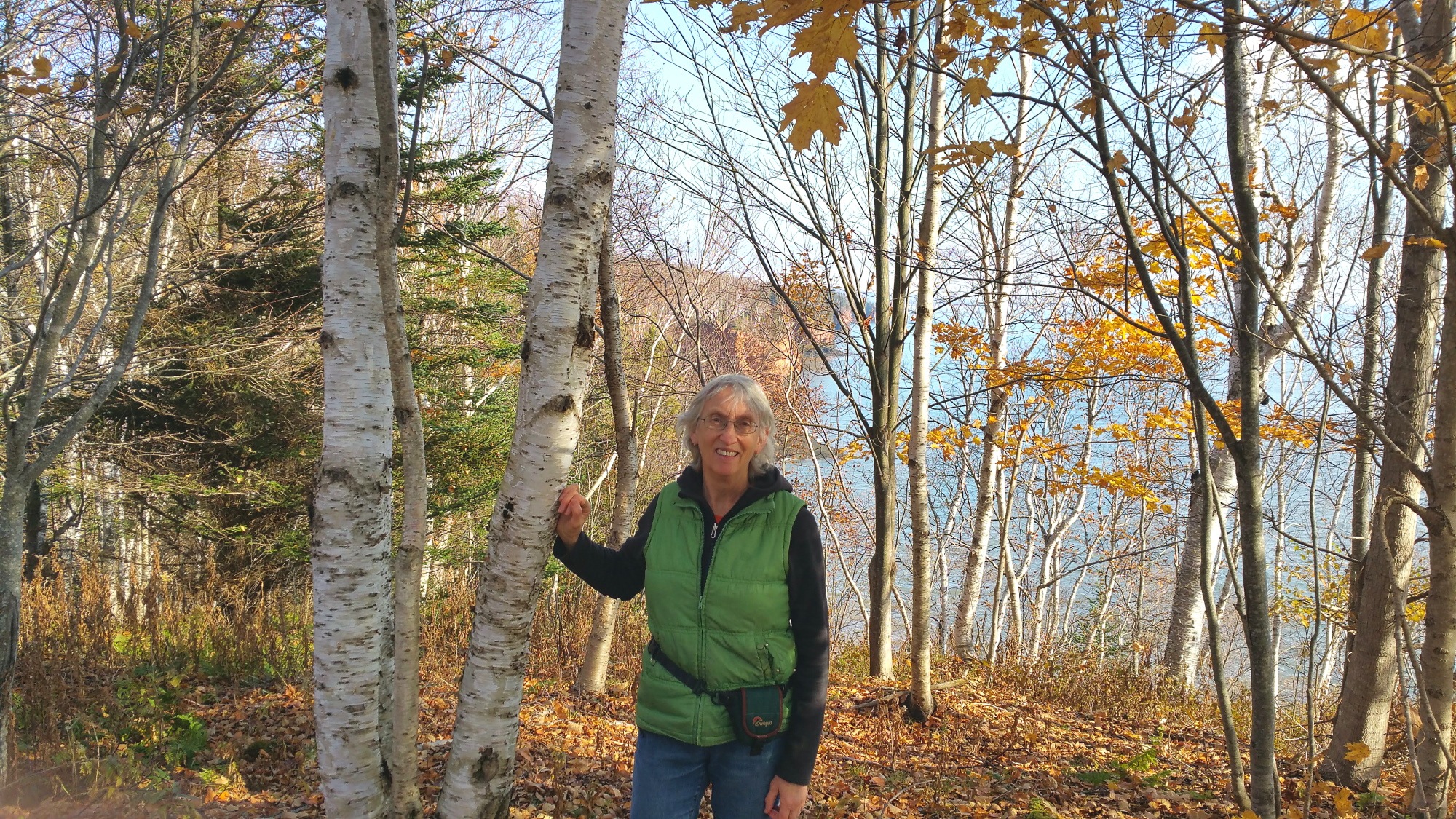 At Red Head, with view of sea-cliffs in the background, Five Islands Provincial Park (© Magi Nams)

We retraced Red Head Trail to its junction with Economy Mountain Trail and, rather than hiking to the EMT trailhead, took the remaining section of EMT downhill through the forest to where it ended at the park’s access road. After a short distance on the road, we linked up with Estuary Trail, which traces the shoreline of the East River estuary, then heads uphill through forest to the park gate. The coastal section of this 2.4-km trail offered a view of Moose Island and two smaller islands, likely Long Island and Pinnacle Island, as well as of golden salt marshes edging the estuary shore. The park is named for a string of five islands off its western tip that includes the three islands already named, plus two small islands, Diamond Island near Moose Island, and Egg Island near Pinnacle Island (see Google map). 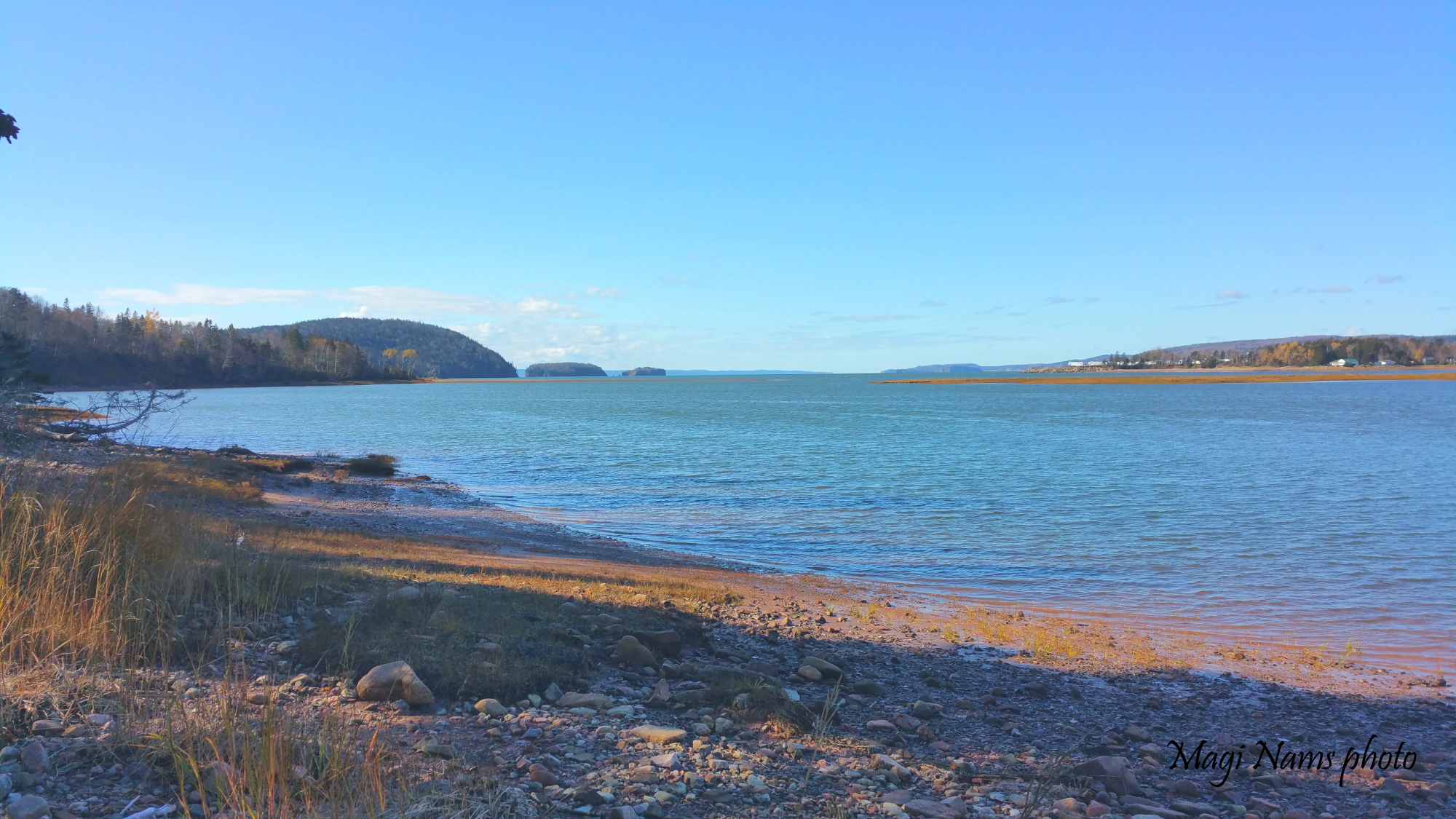 The inland section of Estuary Trail led us through mixed hardwood/softwood forest hung with old man’s beard lichen, the trail often edged with verdant mosses. Balsam fir and eastern hemlock saplings grew in the open forest understory, hinting at a different forest to come. Sturdy bridges carried us over little streams in clefts, and the trail, like Economy Mountain Trail and Red Head Trail, was well-maintained and well-marked. We never had the sense that we didn’t know where we were. Again, we had the company of chickadees and kinglets, and, during our previous Estuary Trail hike, a hairy woodpecker. 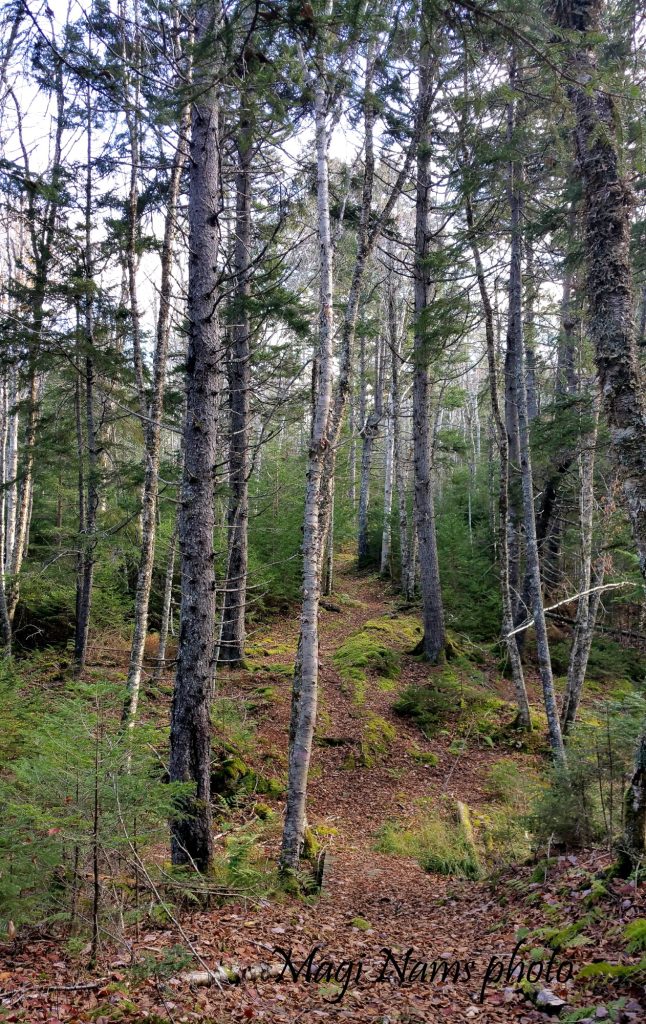 Four hours after setting out on the Economy Mountain Trail, we returned to the carpark, having logged 9 km of trails for the day.  If you’re travelling in northern Nova Scotia and looking for an excellent hike with forest and ocean views, check out Five Islands Provincial Park. Highly recommended. 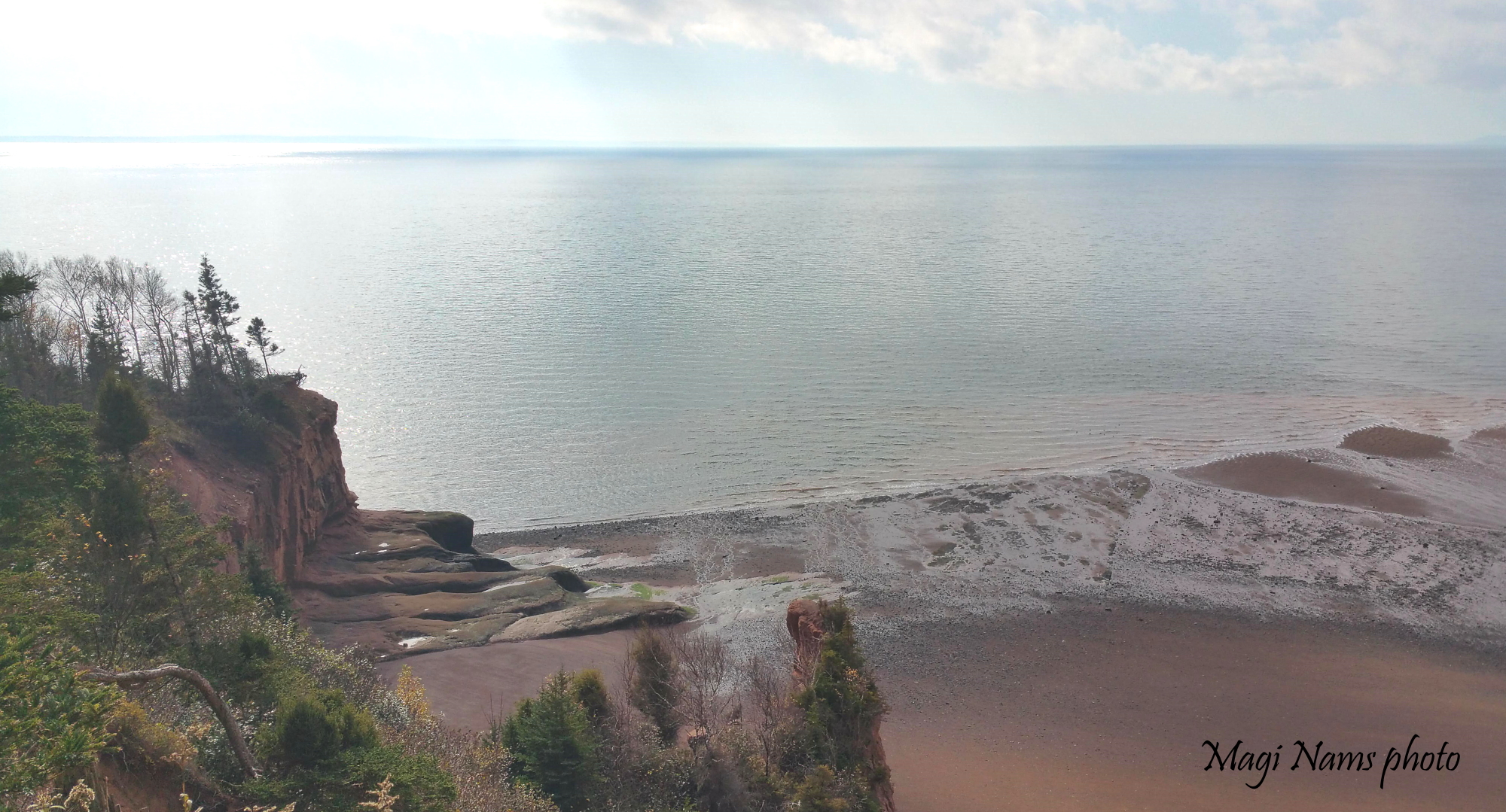