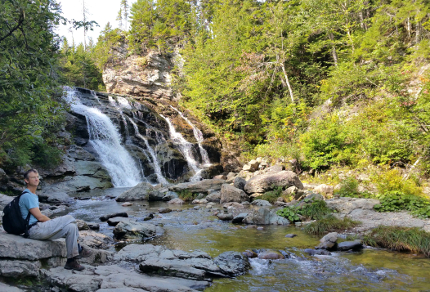 Fundy National Park encompasses 207 square kilometres of protected forest and coastline on the Bay of Fundy in southeast New Brunswick. Featuring over 100 kilometres of upcountry and backcountry trails designated as easy, moderate, or difficult, the park showcases coastal forest, rivers, waterfalls, lakes, and Bay of Fundy shoreline washed by the highest tides in the world. Access is via New Brunswick’s provincial Highway 114, with the park headquarters located near the village of Alma (which has a bakery that makes fantastic cinnamon rolls!). 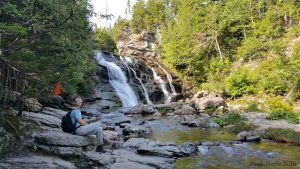 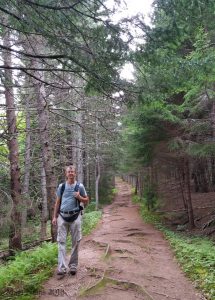 At the end of August 2018, Vilis and I spent two days hiking, birding, and camping in Fundy National Park, our first visit to this maritime national park. We arrived at Point Wolfe campground in mid-afternoon and immediately hiked nearby Matthew’s Head Trail (rated moderate), a 4.5-kilometre loop that took us through forest and meadows and along a stretch of coastline. (Tap on photos to enlarge.)

A red squirrel scampered over the forest floor and raced up a tree, chattering at us for having invaded its territory. I heard the voices of a red-breasted nuthatch,  white-breasted nuthatch, and boreal chickadee. A breeze whispered gently as golden-crowned kinglets flitted in conifers dripping old-man’s-beard lichen. 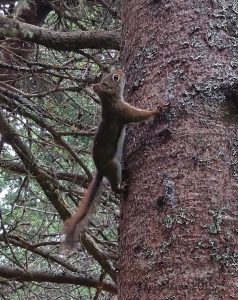 In the forest we noted balsam fir, eastern hemlock, and red spruce trees, sumac and alder shrubs, and blueberry, moss, bracken, wild lily-of-the-valley, and bunchberry growing on the forest floor dotted with rocks and large boulders. Vilis munched on bunchberries as we hiked, and I tried a handful but found them bland and seedy. 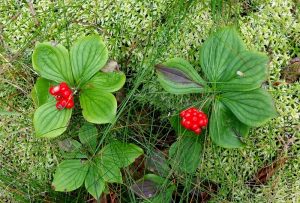 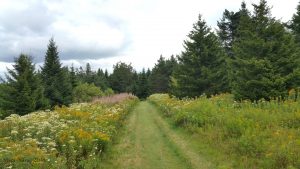 A section of the trail passed through a large wildflower meadow populated with (among other species) asters, goldenrod, thistles, and fireweed. One of the highlights of this hike, for me, was watching monarch butterflies feed in the meadow, their wings like tiny orange flags hanging from flower heads. This was my first sighting of monarchs in the wild, so it was a thrill. If you’re unsure how to tell a monarch from a queen butterfly or viceroy, check out this fun butterfly quiz. 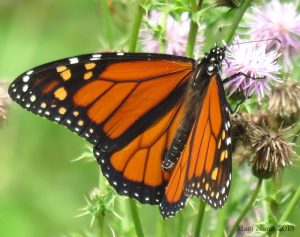 The coastal section of Matthew’s Head Trail provided great views of green water, offshore stacks, and rugged shoreline banks plunging to the ocean. The tide was mostly in, so we didn’t see the large extent of its withdrawal during low tide. 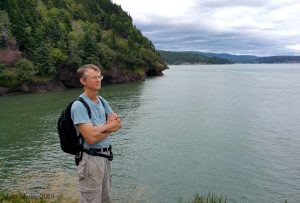 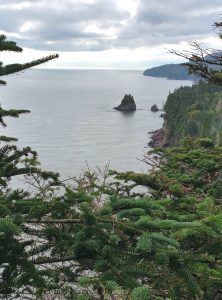 After this hike, we set up camp in the Point Wolfe campground, cooked a hot supper over our Coleman camp stove, strolled the campground roads before dark looking for birds, and crawled into our sleeping bags early.

The next morning we were up at 0630, the air cool and calm, the sky clear. After a hot porridge breakfast, we drove inland to the park’s northeastern region, where we hiked 4.5-kilometre Moosehorn Trail and linked up with 2.5-kilometre Laverty Falls Trail to make a 7-kilometre loop. These trails are located in hardwood, mixed-wood, and coniferous forest on rolling hills in the Canadian Highlands section of the Appalachian Mountains. 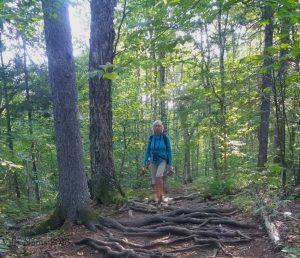 Rated difficult, Moosehorn Trail first led us through gorgeous stands of hardwoods dominated by sugar maple, yellow birch, and beech, with striped maple and viburnum in the forest’s mid-story, and bracken and clintonia in the understory vegetation. A company of black-capped chickadees flew along with us for a ways, and we heard blue jays, an ovenbird, red-breasted nuthatch, and red-eyed vireo.

A stream trickled alongside us as we moved into mixed-wood forest. We dodged around rocks and gnarled roots and scrambled down abrupt trail drops as we made our way downhill to Broad River, a rushing stream edged with rock outcrops and massive boulders. Following the trail, we scrambled over riverside boulders and through shaded coniferous forest at the river’s edge. This was, by far, the most challenging section of trail. 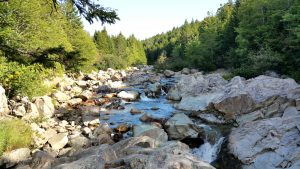 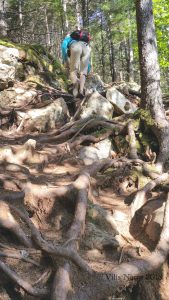 On a challenging, uphill stretch of Moosehorn Trail (© Vilis Nams)

The trail eventually eased into mixed woods and alder scrub, in which I heard songs of a black-throated blue warbler, song sparrow, black-throated green warbler, and a chipmunk’s chitter. On the open, stony river floodplain, we hiked through scrub vegetation dominated by alder, elderberry, raspberry, and creeping blackberry and spotted a raven, northern flicker, and hairy woodpecker.

An hour and fifty minutes after starting Moosehorn Trail, we linked up with Laverty Falls Trail (rated as moderate) and began the uphill hike from the river through coniferous forest to Laverty Falls (see opening photo). After a welcome break at the falls, we continued our uphill hike through mixed-wood forest and finally into the hardwood forest near the trailhead, where we encountered the first other hikers we’d seen on the trail (lovely to have it to ourselves for so long!).

We hiked Laverty Falls Trail in fifty-five minutes, so the entire 7-kilometre loop took us only two hours, forty-five minutes, leaving plenty more time to explore. We ate our picnic lunch at scenic Laverty Lake and then hiked 1.5-kilometre Dobson Falls trail (rated moderate), with all its stairs and boardwalks, to the exquisite peace of Dobson Falls and pools of clear water amid moss-covered rocks. The Point Wolfe covered bridge and stony Cannontown Beach also offered striking scenes. All in all, we were impressed with the variety of landscapes and habitats on the trails we hiked and the park’s abundant natural beauty. As we drove away, we were already planning our next hiking and camping trip there. Well done, Fundy National Park! 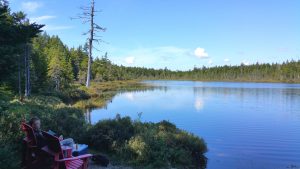 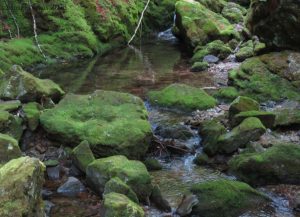 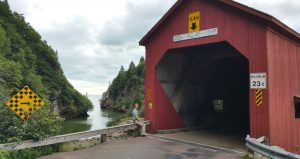 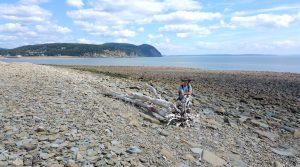