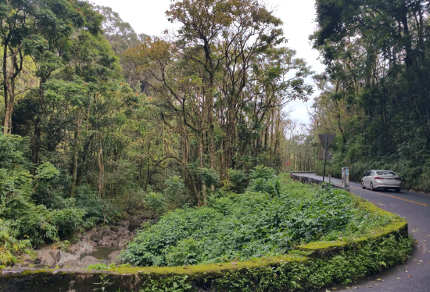 In February 2019, Vilis and I explored Maui for thirteen days, accompanied by our family for much of that time. We hiked coastal and mountain trails, snorkelled with Hawaiian green sea turtles and brilliantly coloured fish, watched humpback whales  and spinner dolphins frolic in coastal waters, and drove nearly every major road on the island. Today’s post is a collection of photographs from our travels, accompanied by snippets of geography, history, culture, and ecology.

Maui is the second largest island in the state of Hawai’i, a curved chain of volcanic peaks thrusting up from the mid-Pacific Ocean floor. Called the “Valley Isle,” Maui is about 30 miles (50 kilometres) long and 20 miles (33 kilometres) wide at its widest point, making it a convenient size for travellers to explore. (I definitely recommend renting a car.) Maui is flanked to the west by three offshore islands (Kaho’olawe, Lana’i, and Moloka’i) and an eroded crater rim (Molokini), all of which make up the County of Maui.

On our first morning on Maui, Vilis and I were greeted by a rainbow over the island’s major city of Kahului. In the following days, we realized why the Hawaiian licence plate features a rainbow, since frequent showers painted glorious rainbows over the hills and mountains. Air temperatures during our visit ranged from the low 70s to mid-80s in degrees Fahrenheit (21 to 29 degrees Celsius), giving us a delightful break from the bone-chilling Canadian winter. (Tap on photos to enlarge.) 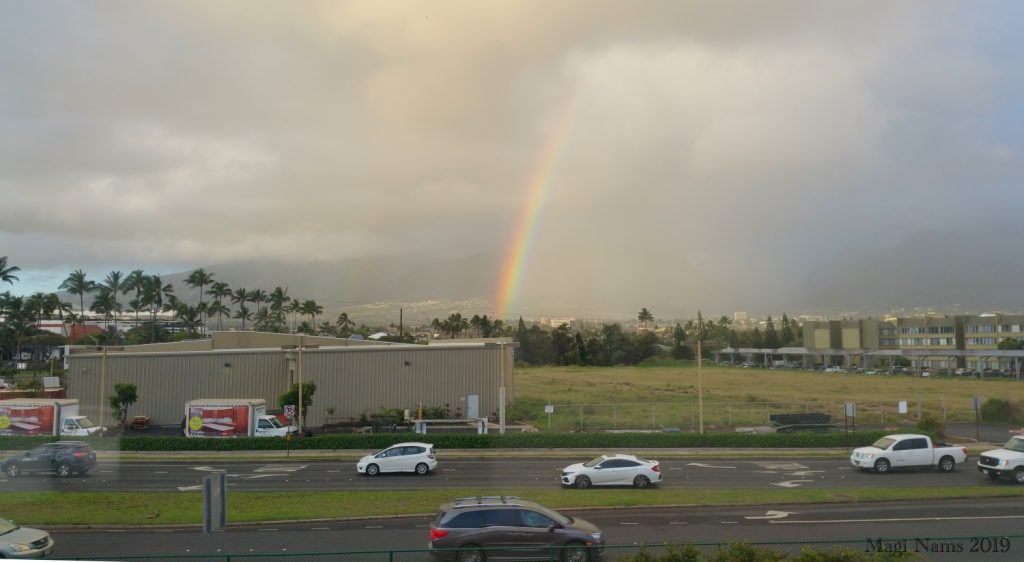 Maui’s landmass of is made up of two volcanoes separated by a valley-like isthmus—hence the name “Valley Isle.” On a map, the island looks like a small bud and a big bud linked by a narrow neck. The smaller volcano, Pu’u Kukui, dominates the island’s northwest, while the much larger and younger volcano, Haleakalā, fills the bulk of the island’s southeast. 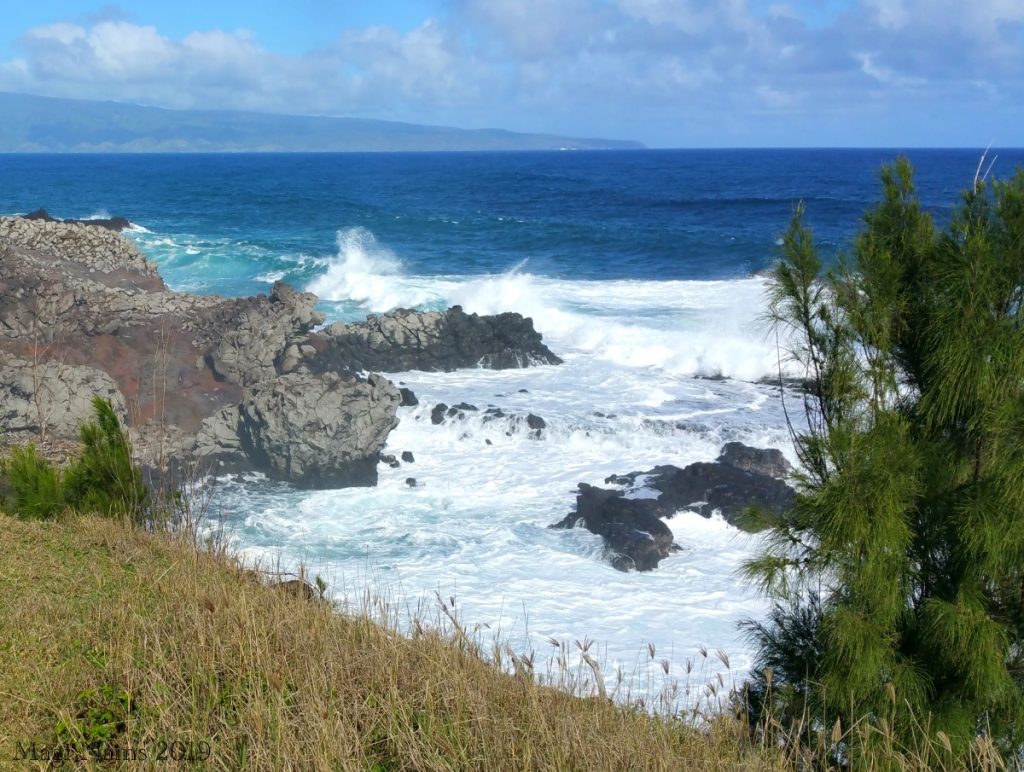 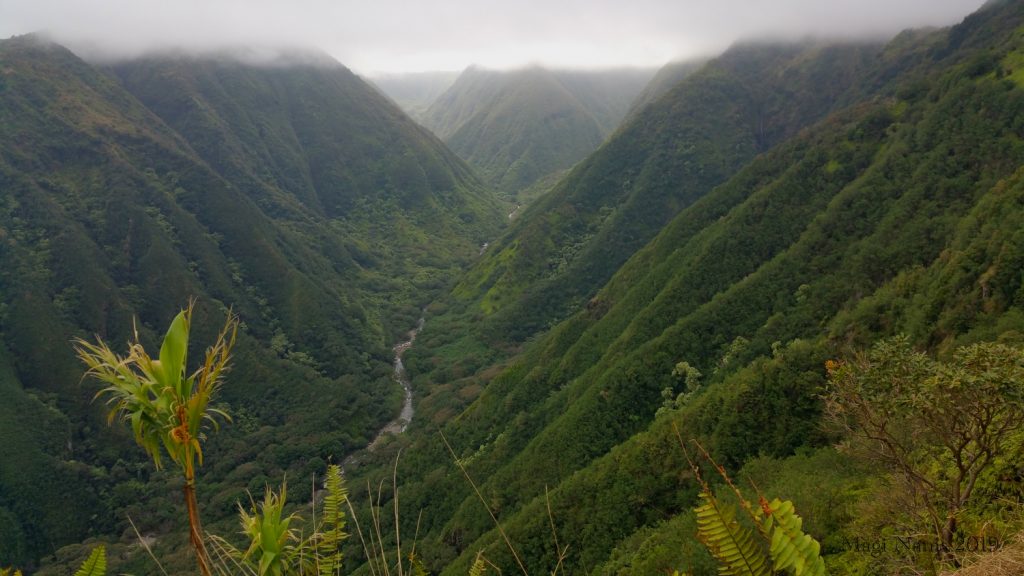 The rest of the island, with the exception of the isthmus or “neck,” is the massive dormant volcano, Haleakalā, “House of the Sun,” which has an elevation of 10,023 feet (3084 metres). Haleakalā’s summit is sacred to the Hawaiian people.

The photograph below shows cinder cones pimpling the western slope of Haleakalā. The black, split cone to the lower left of centre in the photograph is the site of Haleakalā’s last eruption, thought to have occurred in the late 1700s. Lava from that eruption spilled down the mountainside into the ocean, creating the field of black lava rock visible below the cone and along the shore in the photograph. We drove a road through that lava field en route to La Pérouse Bay, a snorkelling hot spot. The bleak landscape looked as though a bulldozer had gouged out rocky hills and swales.

We also drove Crater Road’s 20 miles (32 kilometres) of curves and switchbacks to ascend Haleakā so we could hike into the volcano’s crater. That drive through Maui’s Upcountry took us through farmland and, in the upper reaches, extensive grasslands belonging to a ranch. On a clear day, this drive is worth it for the views alone—across the valley to the West Maui Mountains, and out over the offshore islands. We could look down onto the red landscape of Kaho’olawe, which was denuded of trees by the late 1700s, trampled by hoofed feral livestock, and used as a military shooting range, all of which contributed to soil loss and massive erosion on the offshore island.1

The crater of Haleakalā, a shield volcano, wasn’t caused by a massive eruption. Instead, it’s actually a deep valley resulting from erosion due to wind, water flow, freeze-thaw, and landslides. Cinder cones, old lava flows, and cinder-sand comprise a raw, exquisite landscape strikingly different from the lushly vegetated peaks of the West Maui Mountains. (Watch for an upcoming post about hiking in Haleakalā National Park.) 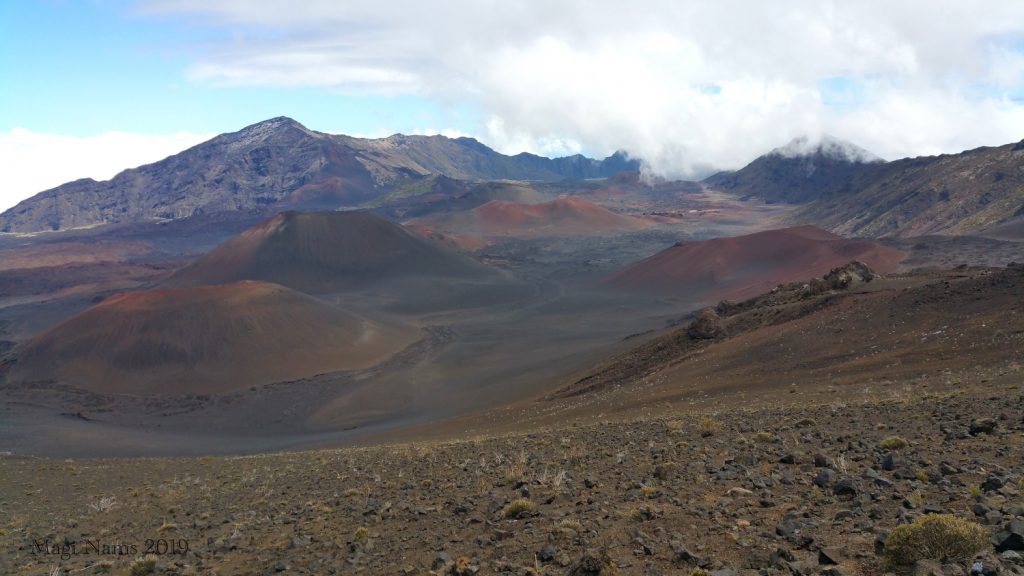 The western, leeward side of Maui is drier and less windy than the eastern, windward side of the island, creating perfect conditions for tourist resorts. For much of our time on Maui, home base was a seaside condo unit in Honokowai, West Maui, one of many resort centres lining Maui’s northwest coast.

Every day, from our condo’s balconies, we watched humpback whales blowing and breaching offshore in Hawaiian Islands Humpback Whale National Marine Sanctuary. Our stay coincided with the whale-watching peak season of January through March, when mating, calving, and nursing—but not feeding—occur in the warm Hawaiian waters. In summer, the endangered humpbacks migrate north to their feeding grounds in the Bering Strait off the coast of Alaska. We booked a whale watching tour out of Lahaina, and spent two hours watching majestic humpbacks blow, surface, breach, do head rises, tail slaps, “fluke up” dives, and wave their pectoral flippers. 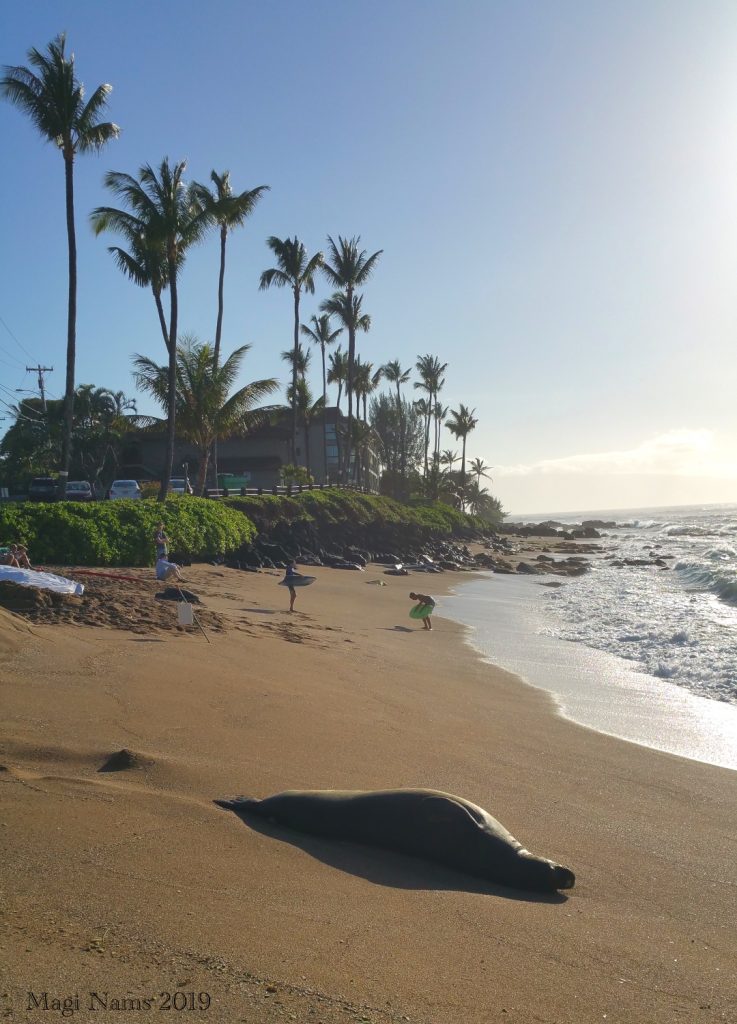 One day, a Hawaiian monk seal (one of the world’s most endangered mammals) snoozed on a beach only a short walk from our digs. On several days, endangered Hawaiian green sea turtles rested on pockets of sand among lava rocks edging the shore below our condo. On a snorkelling tour out of Ma’alaea, Vilis and I had the thrill of swimming among green sea turtles offshore from Makena. We were careful not to touch them or obstruct their path, since a $10,000 fine can be slapped on anyone who does!

The snorkelling tour, which took us to La Pérouse Bay and Makena, offered us spectacular views of colourful reef fishes, turtles, and an octopus. Good snorkelling sites abound along Maui’s western coastline, and we sampled Ahihi-Kina’u Natural Area Preserve near La Pérouse Bay, and Pu’u Keka’a (Black Rock) at the north end of Ka’anapali Beach. At the latter, I watched, among many other kinds of fish, schools of pink-and-purple wrasses feed on algae growing on rocks near shore, and saw a white eel with black spots emerge from a rocky crevice. During our time on the island, I realized that much of Maui’s natural richness lies not on its land, but in the ocean surrounding it. If I return, I’ll focus on fish watching instead of bird watching! 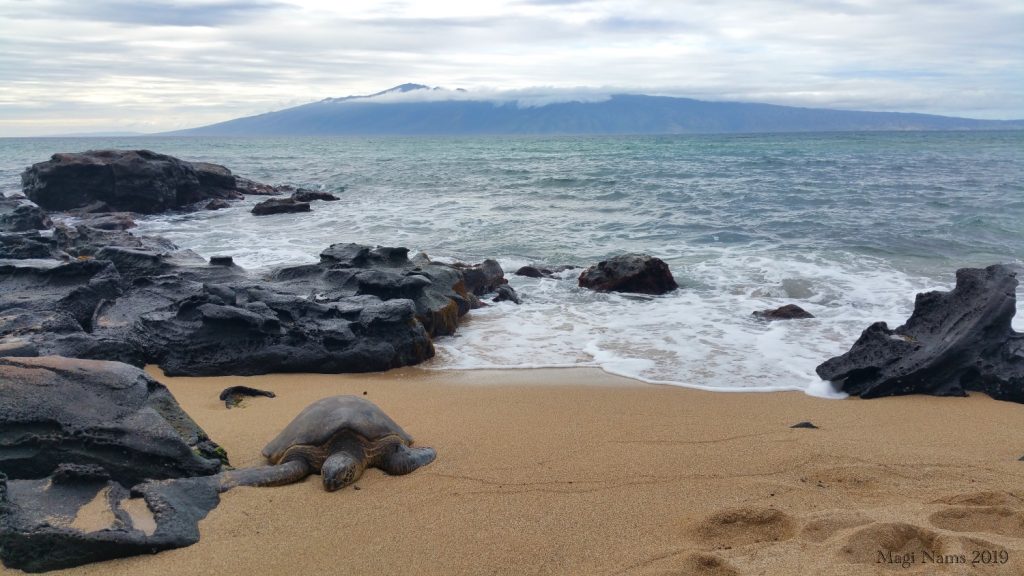 Hawaiian Green Sea Turtle (Chelonia mydas) onshore at Honokowai, with the island of Moloka’i in the background (© Magi Nams)

The eastern, windward side of Maui receives much more rain than the western side, supporting the growth of tropical rainforests. Vilis, I, and our younger son devoted one entire day of our vacation, from dawn until dusk, to driving the famed Hāna Highway from Kahului to Hāna to see those rainforests, cluttered with vines and climbing philodendrons. Then we drove the drier, south perimeter of Haleakalā on Pi’ilani Highway before returning to Honokowai. If you love coastal drives with stunning scenery and body-tensing tight curves on a narrow (sometimes extremely narrow) road, this is the drive for you.

The tortuous but glorious Hāna Highway crosses more than six hundred bridges, offering views of numerous waterfalls. We paused to creep through a lava tube cave beside the highway, and to stroll through beautiful Ke’anae Arboretum, with its plantings of bamboo (introduced to Hawai’i by Polynesian settlers) and exotic trees, such as rainbow eucalyptus. From Ke’anae Point, we viewed a distant waterfall spilling down rugged coastal cliffs cloaked in tropical rainforest. 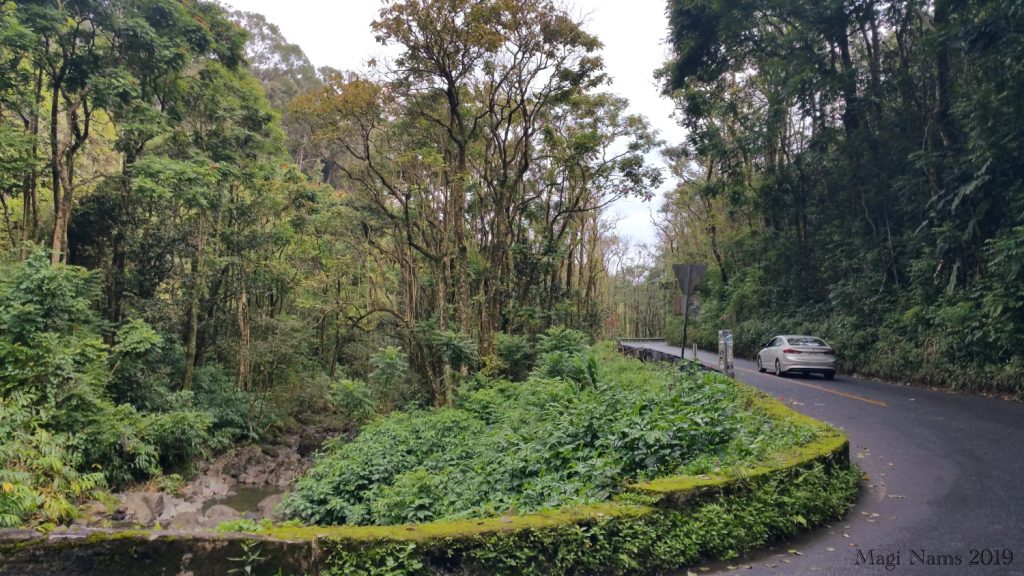 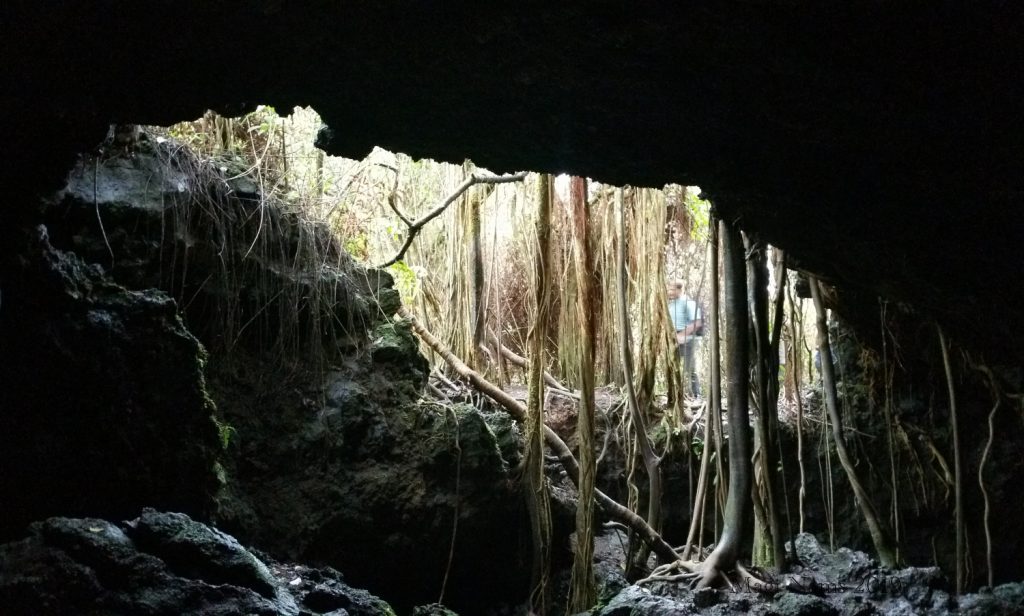 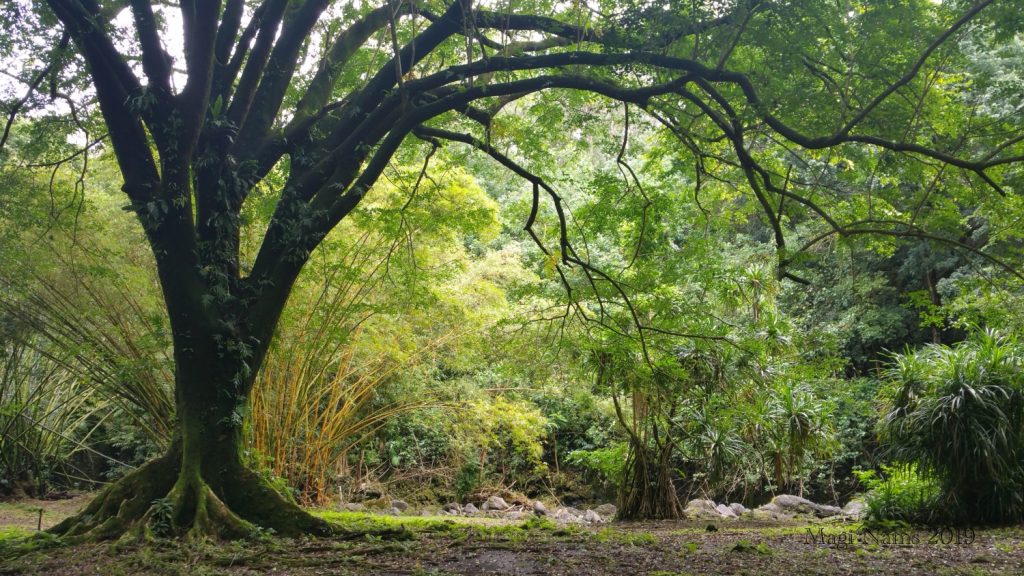 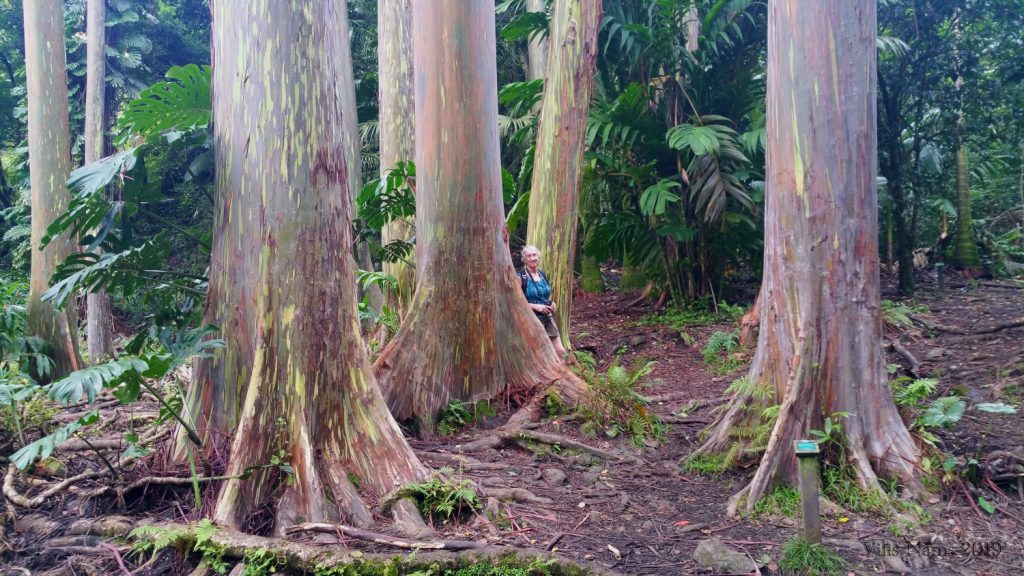 Past Hāna, the road narrowed, hugging the coast even more tightly, gripping the edge of sheer cliffs that fell to the ocean. A five-mile section of road was rough and unpaved. Lush vegetation gradually gave way to drier scrubland and grassland as we traced Maui’s south coast on Pi’ilani Highway before swinging north to make the return drive to Honokowai. 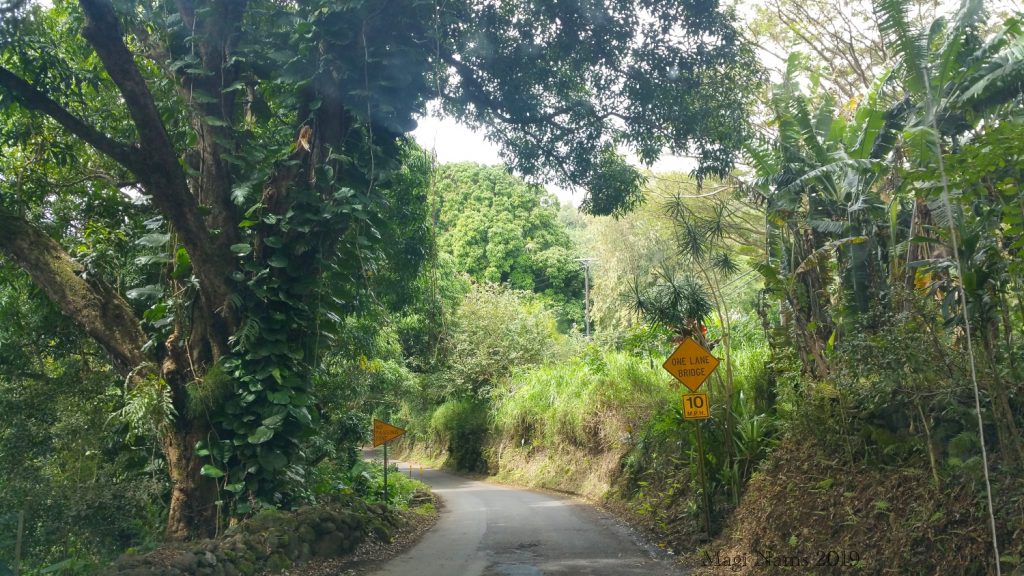 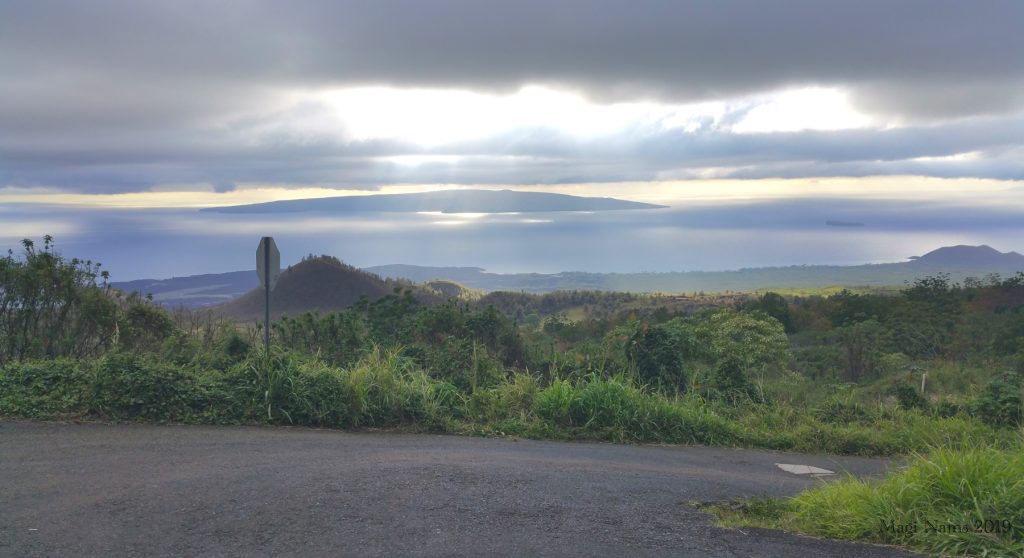 For our last night on Maui, Vilis and I stayed at a rural B&B near the Upcountry town of Makawao. I sat in the back yard for hours, identifying birds, soaking up the tropical winter warmth, and enjoying the view of clouds rolling over Haleakalā’s distant summit. Well done, Maui! 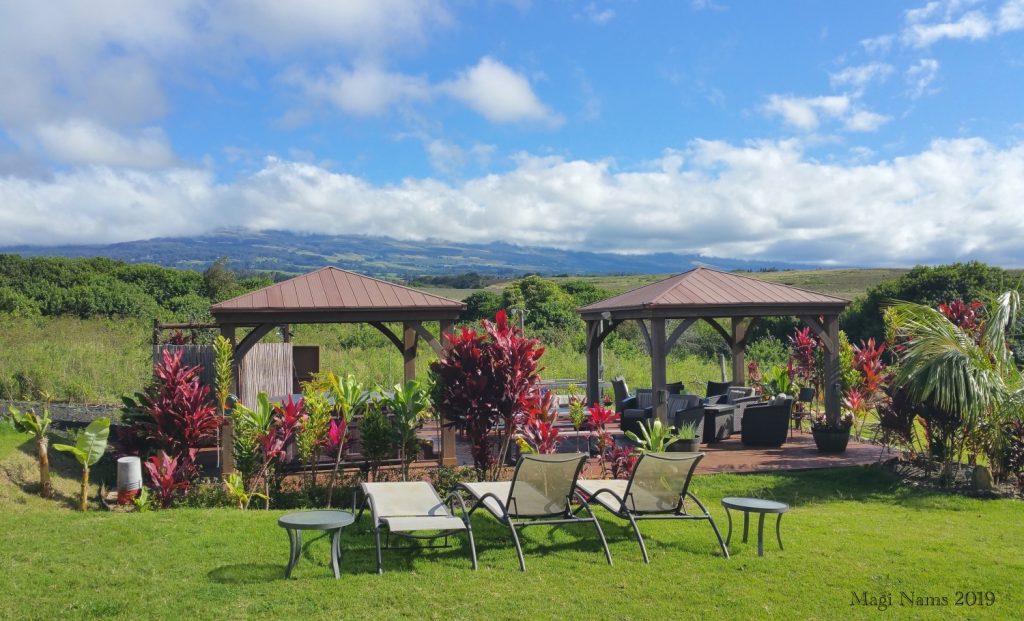