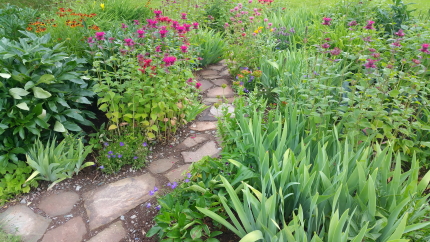 Many aspects of life require us to just start somewhere and move forward, one steady step at a time. So does faith. We start with where we are and who we are.

September in Nova Scotia has arrived in all its glory. Maple leaves are turning red and orange, their vivid foliage like fluttering banners shouting ‘autumn!’ My veggie garden is bursting at its seams with vegetables that tantalize Vilis’s and my taste buds and adorn our plates with vivid hues. We eat tiny Sun Sugar tomatoes like candy, popping them into our mouths and relishing their juicy sweetness.

In many ways, it’s been my gardens, yard, and our land here at Ravenhill that have comforted me and given me freedom during the COVID-19 pandemic. Like many of you, I’ve spent a lot of time at home during the past six months. And like many of you, I’ve used the extra time without my usual social commitments to tackle new projects. In spring I added countless wheelbarrow loads of topsoil to my garden beds and planted a new long flowerbed (yes, another one!) intended to be a butterfly garden. In summer I laid a flagstone path through my largest flowerbed and flagstone entrances to my workshop’s three doors.

(Update! My workshop, shown above, is the renovated “shed” featured in my Exploring Faith post Spiritual Renovation: Are We Worth Saving? Now two years down the road, it has an attached chicken coop that Vilis and I built last summer, plus flowerbeds, of course. That old building has come a long way!)

I finished the flagstones on July 29. Often since then, I’ve wondered how I ever had the energy to maneuver all that rock. In the same way, after I finished adding soil to my garden beds, I wondered how I ever had the energy to haul all that soil. The answer is that I just started somewhere. I pushed the first wheelbarrow load of soil, and then the next. I set the first flagstone, and then the next. Many aspects of life require us to just start somewhere and move forward, one steady step at a time.

When Jesus called his disciples, he called them away from the lives they knew into a totally new life. In Matthew 4:18-20 we read,

As Jesus was walking beside the Sea of Galilee, he saw two brothers, Simon called Peter and his brother Andrew. They were casting a net into the lake, for they were fishermen. “Come, follow me,” Jesus said, “and I will send you out to fish for people.” At once they left their nets and followed him.

In the same way, he called James son of Zebedee and his brother John, who were also fishermen. And in Matthew 9:9 we read,

As Jesus went on from there, he saw a man named Matthew sitting at the tax collector’s booth. “Follow me,” he told him, and Matthew got up and followed him.

Simon and Andrew left their nets and followed Jesus. So did James and John. Matthew left his tax booth. And there were others. The men had no outstanding qualifications for or experience at being disciples. Yet they didn’t hang back. They followed Jesus. They just started somewhere – where they were, and who they were – and they moved forward one step at a time, learning as they went, and leaning on Jesus.

Jesus taught his disciples for three years, and they became teachers who spread his words and Way throughout their world. That incredible journey began because Simon and Andrew, James and John, Matthew and the others took one first step toward Jesus.

Move forward, one steady step at a time

There might be times in our lives when we mess up, or when we’re lost and don’t know which way to go. Those are times when we need to just start somewhere, to take that first step toward Jesus, even if it’s the same first step we’ve taken a thousand times before. Proverbs 3:5-6 tells us,

Trust in the Lord with all your heart and lean not on your own understanding; in all your ways submit to him, and he will make your paths straight.

With our eyes on Jesus, we can face seemingly insurmountable challenges or hardships that appear impossible to overcome. With Jesus by our side, we can move forward, one steady step at a time – wherever we are, and whoever we are in this moment – learning as we go and leaning on Jesus. We’re all sinners and broken in one way or another, but we have a light shining for us that will never grow dim, a Christ-light that will ever illuminate our path. We must just start somewhere.