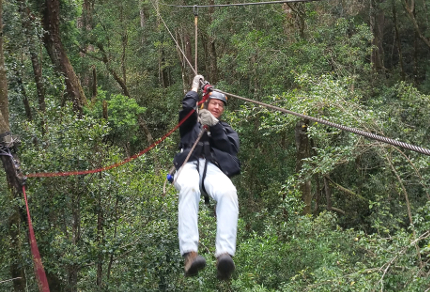 The heart-pounding, “hand-ready-to-brake” Tsitsikamma Forest Canopy Tour took us sliding along cables through the treetops, tens of metres above the ground, in rich, indigenous South African forest.

After Vilis and I drove through Cloetes Pass, which took us from the Klein Karoo to Western Cape’s coastal plain, we booted it 230 kilometres eastward past verdant farms and industrial and touristy coastal cities to Storms River Village, a rainforest village in the Tsitsikamma Section of Garden Route National Park. We had a date with a Tsitsikamma forest canopy tour. 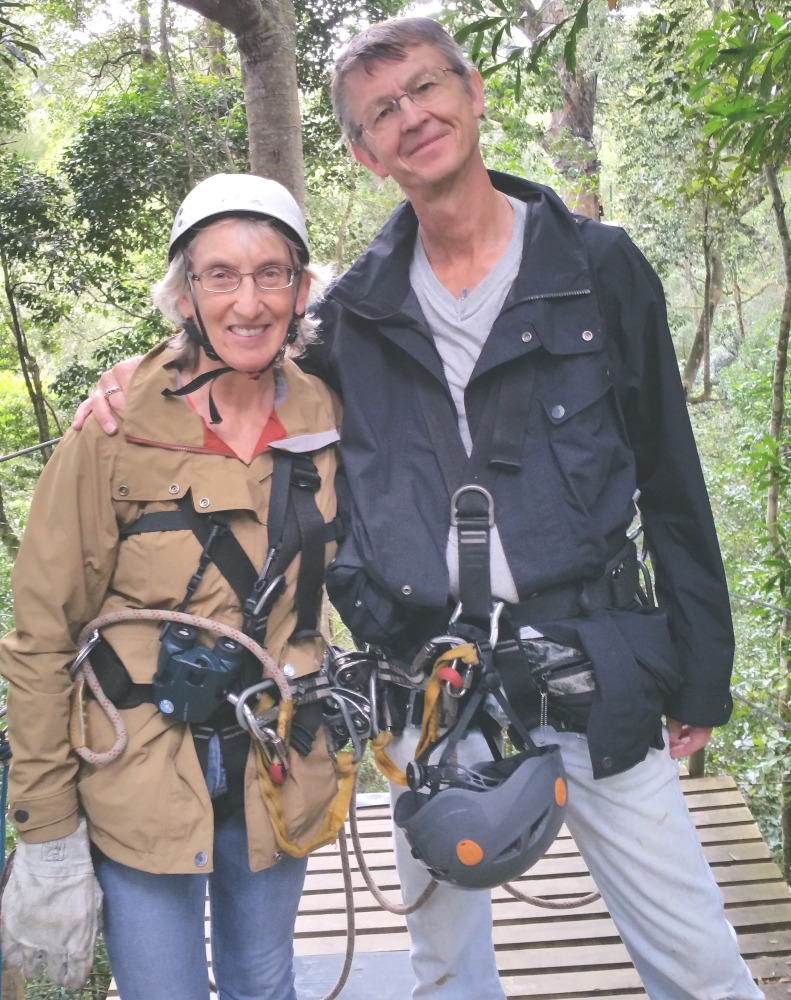 After a rushed lunch at a picnic table in Storms River, we checked in with Stormsriver Adventures for their afternoon Tsitsikamma forest canopy tour. We received a ten-minute video briefing about safety procedures and tour protocol and signed indemnity papers. Then we were outfitted with full-body harnesses, helmets, climbing gear, pulleys and long-wristed leather gloves. The glove palm for our strong hand (We were asked, “Which hand do you write with?”) was reinforced with a tough leather patch to help our hand withstand the friction of the cable sliding across it.

The gear was heavy, and we clunked our way into an open game-viewing-type vehicle. Along with two other guests, we were driven a short distance to Plaatbos Reserve in Tsitsikamma Forest, with its ancient indigenous trees. This was home to the forest canopy tour’s ten zip lines. (Tap on photos to enlarge.) 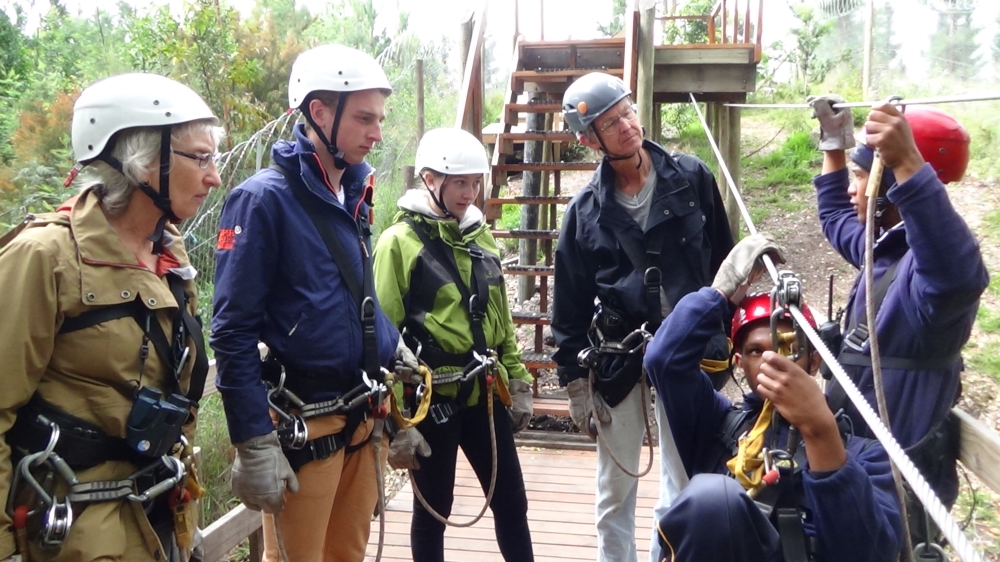 We began the tour by climbing onto a wooden launch platform that was positioned at the top of a steep slope. Our two guides demonstrated how they would clip each of us, in turn, onto the zipline with two attachment points. The zip line also had an attachment to a safety line. With our strong hand, we were to lightly grasp the zipline behind the pulley and allow the cable to slide freely. One of the guides, who would zipline ahead of us to each platform, would signal us if we needed to brake before landing, which we were to do by squeezing the cable to slow its passage through our hand. Once we had landed, he would clip us to a platform cable and unclip us from the zipline, after which we’d be ready for the next zip line. Then the next person would launch themselves into thin air. 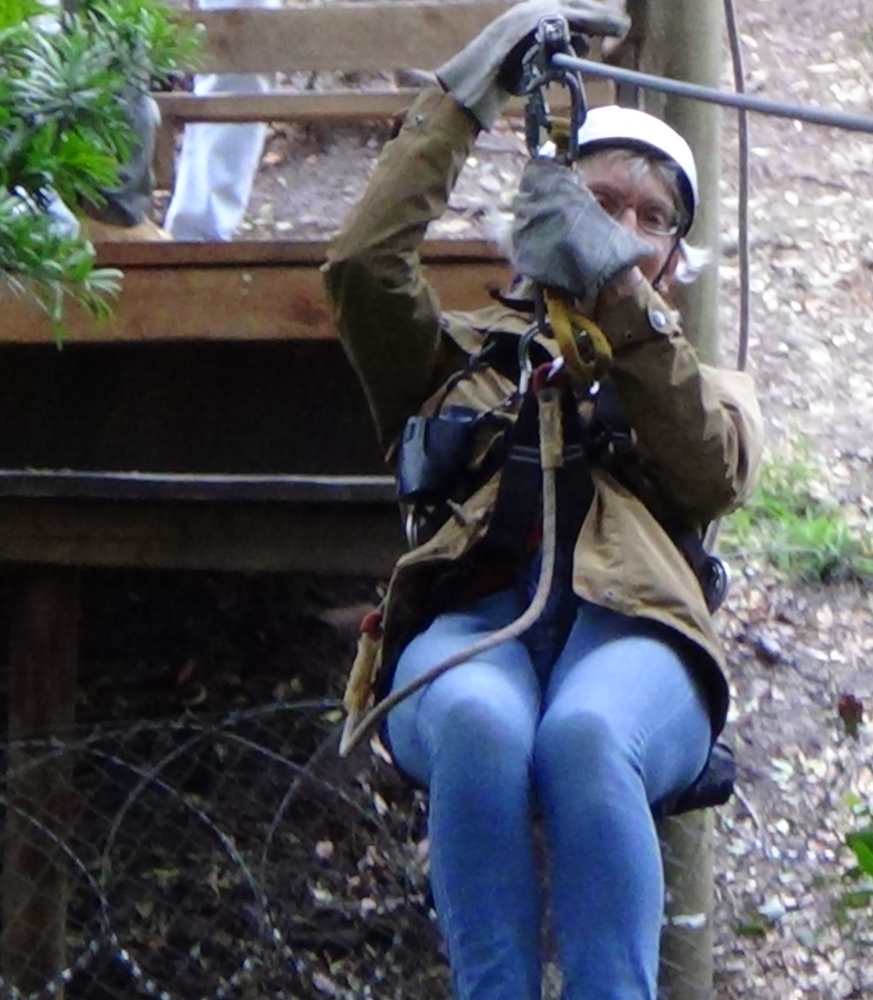 Then we were off! My ride from the launch platform to the first tree platform was a short and relatively slow one, allowing me to familiarize myself with the equipment and get comfortable with glidingthrough the treetops at a height of tens of metres above the ground. Each of the ten forest canopy zip line platforms was attached to an Outeniqua yellowwood or Cape hard pear tree, the two tallest and strongest tree species in the forest. The highest zip line was 30 metres above the ground. The longest was 91 metres. 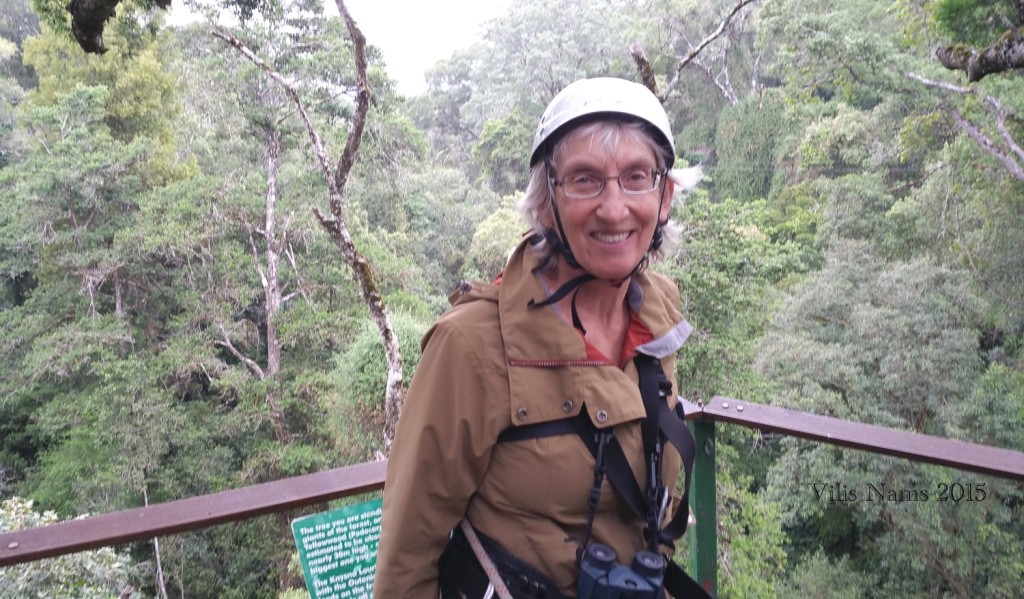 Here, I’m on a landing platform during the canopy tour. (© Vilis Nams) 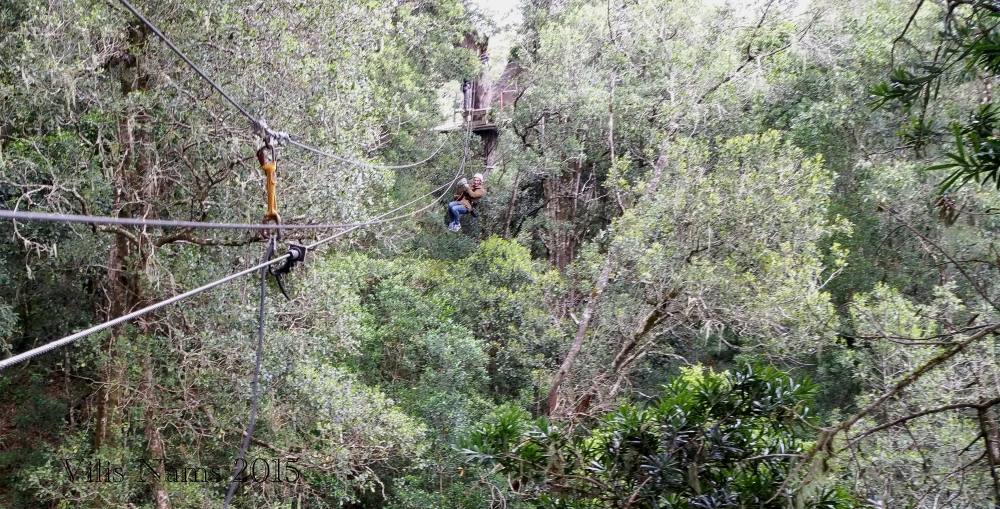 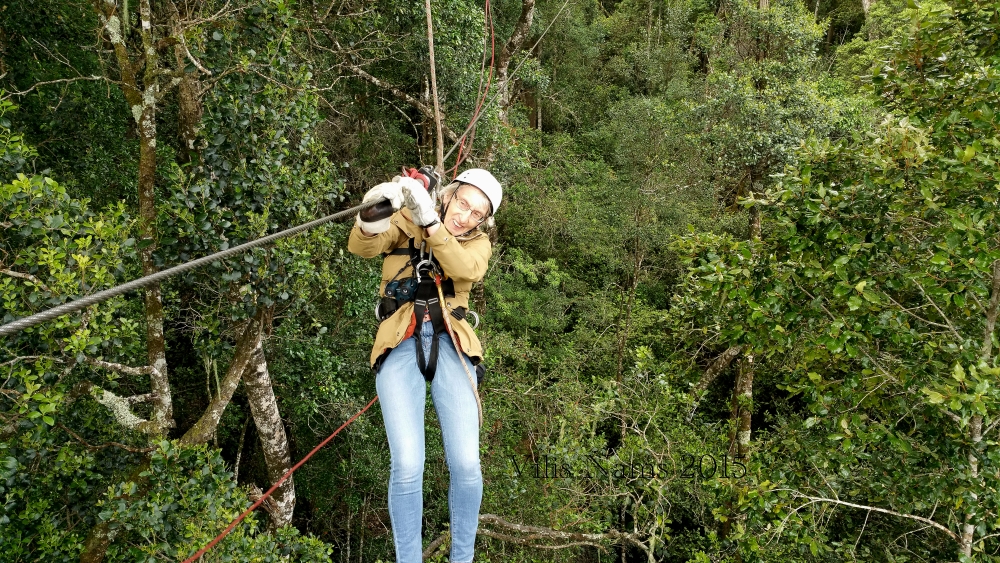 Ten times, we clipped onto cables and hung from them as we flew through the forest without wings, sometimes slower, sometimes faster, the treetops dancing past us. From tree platforms, I heard the voices of Knysna turacos, green wood-hoopoes and drongos, but I never really had time to use my binoculars. I was too busy watching the other zipliners’ flights and focusing on controlling my own. A couple of times, I  braked too early when coming in for a landing and once didn’t brake enough, but the landing guide applied brakes for me so I didn’t crash into the wooden platform. By the end of the tour, I had the brakes figured out and wished for a few more zip lines!

The 91-metre forest canopy zip line was the fastest and most impressive. I rode it first and then gazed back to where Vilis was a small figure waiting on the launch platform. I tracked him with my cell phone camera as he launched into the air and zipped along the line through the spectacular old-growth forest. 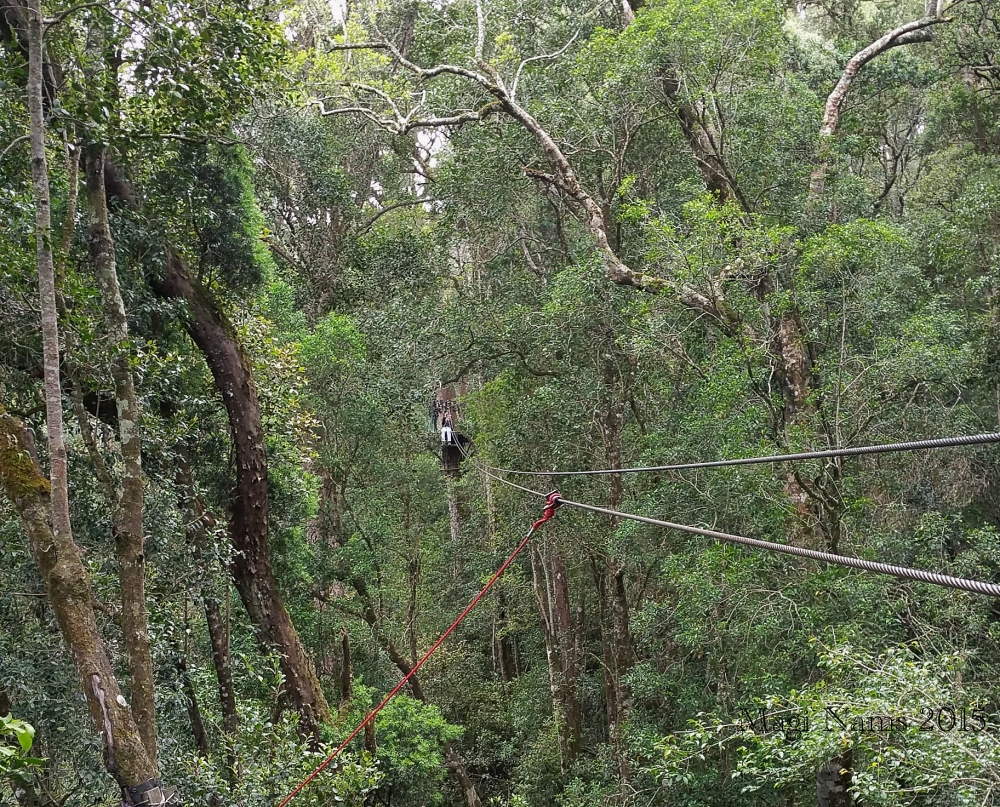 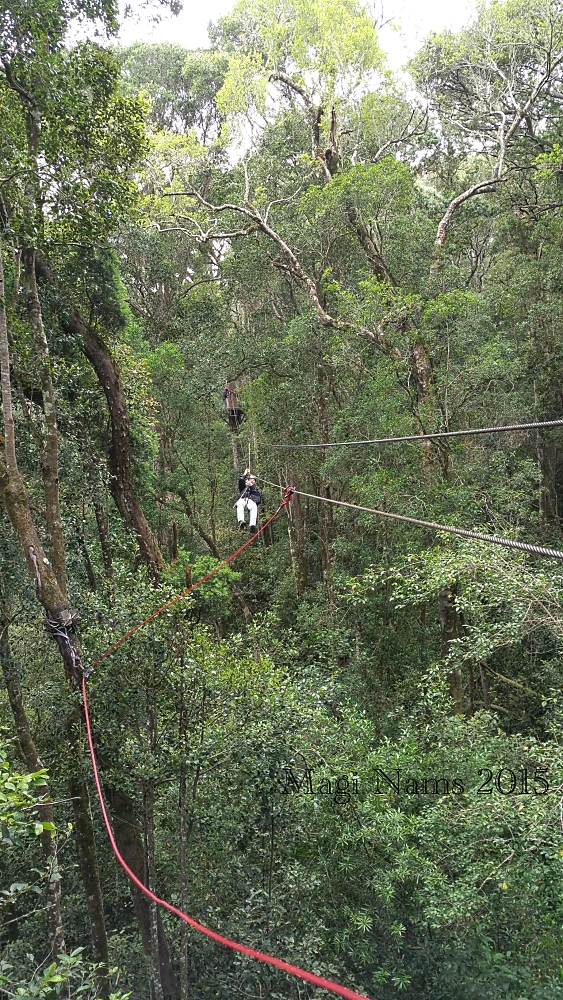 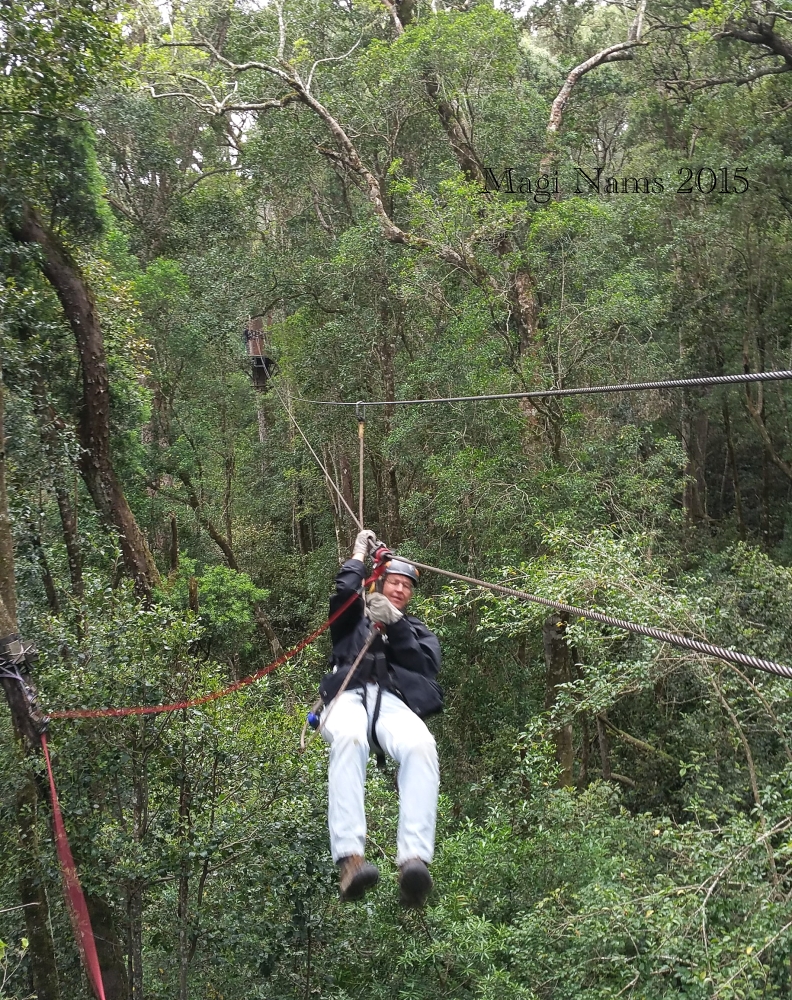 And coming in for a landing. (© Magi Nams)

The Ttsitsikamma forest canopy tour finished too soon. We trekked slowly up the long rise from the lowest landing platform to the first one, where we had started the tour. After we returned to Storms River Village and our guides removed the heavy harnesses, we drove to Garden of Eden in Knysna Section of Garden Route National Park and booked into Tree Top Chalet, the most luxurious national park accommodation I’ve ever experienced. Completely private. Two bedrooms. Washer and dryer. Shower and bath. Leather couches in the living room. Television. Big deck looking out into surrounding indigenous forest. What a treasure to arrive at after a long day of driving and a magnificent zip through the forest! Well done, SANParks! 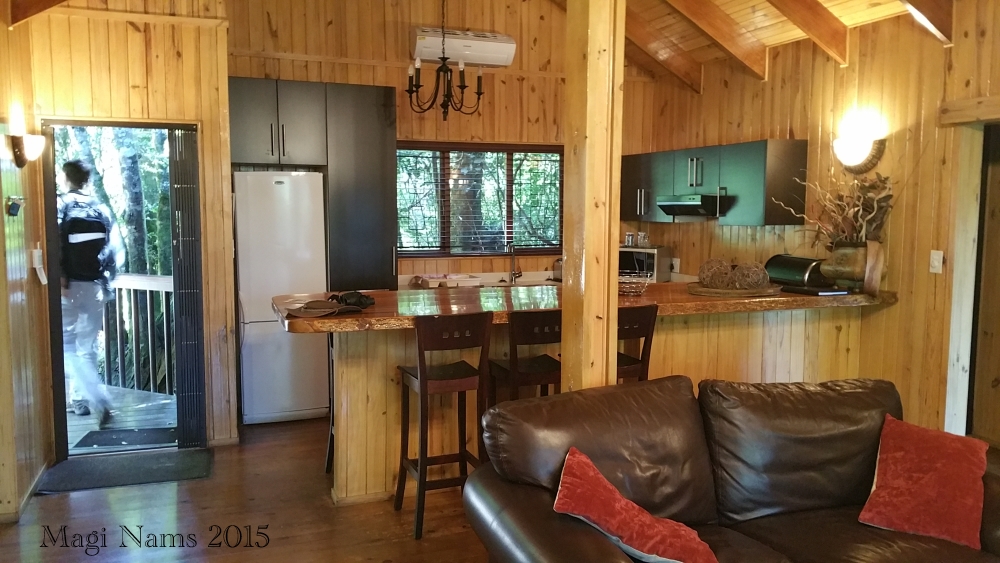 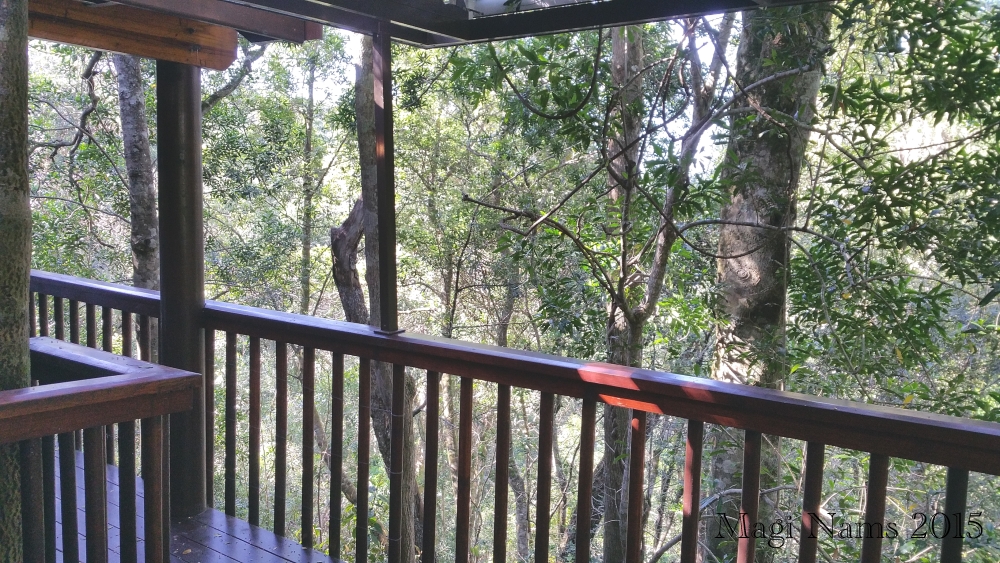 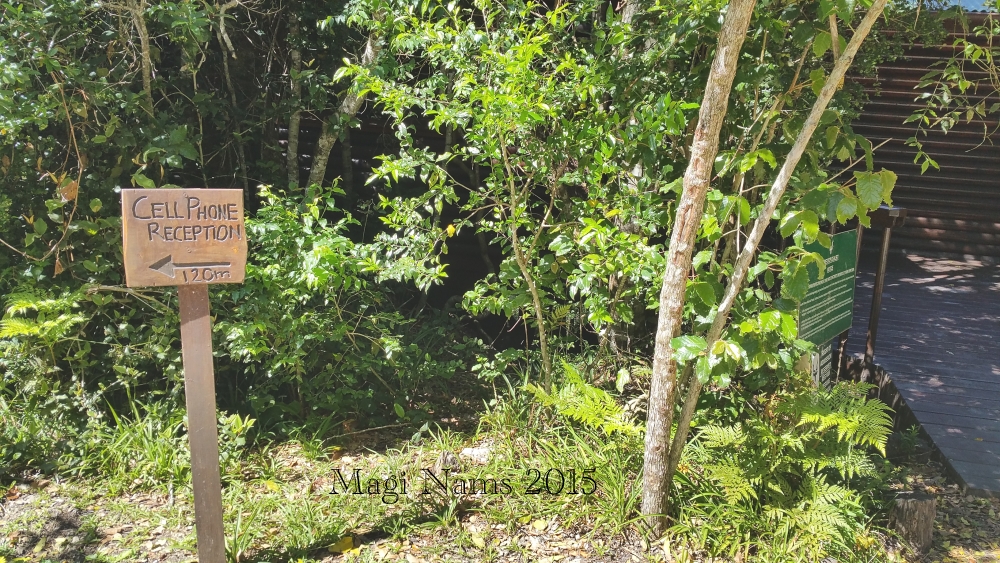 The next morning, we hiked through dense, towering indigenous forest, at ground level rather than in the treetops. Then we drove eastward, pausing to hike part of the Kranshoek Coastal Trail before checking into an oceanette at Storms River Mouth for the last night of what I came to think of as the “Karoo Loop.” Finally, on October 28, it was home to Grahamstown, which looked unbelievably green when compared with the harsh, semi-desert “Great Thirstland” that occupies the centre of South Africa.