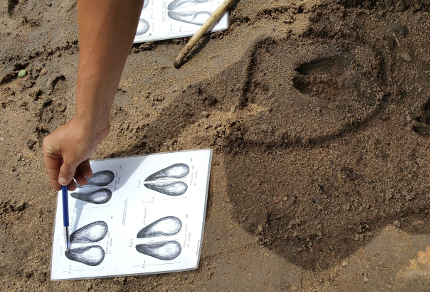 A five-day adventure tracking wildlife in Limpopo granted me an incredible glimpse into the lives and movements of antelopes, leopards, scrub hares, hyenas and other wildlife, from the ground up!

Sandwiched between the Olifants and Skukuza sections of our Kruger National Park exploration, Vilis, I, and our son, Jānis, spent five days as students with the Limpopo Field Guiding Academy, tracking wildlife in Limpopo. The first four of those days, we were based at Pitsi Camp in Mabalingwe Nature Reserve 30 kilometres west of Bela-Bela in southern Limpopo province, South Africa. The last day was split between Mabalingwe Nature Reserve and Mabula Private Game Reserve 20 kilometres to the northwest. Both reserves featured primarily dry savannah vegetation and were backed by lightly wooded, rocky hills. (Tap on photos to enlarge.) 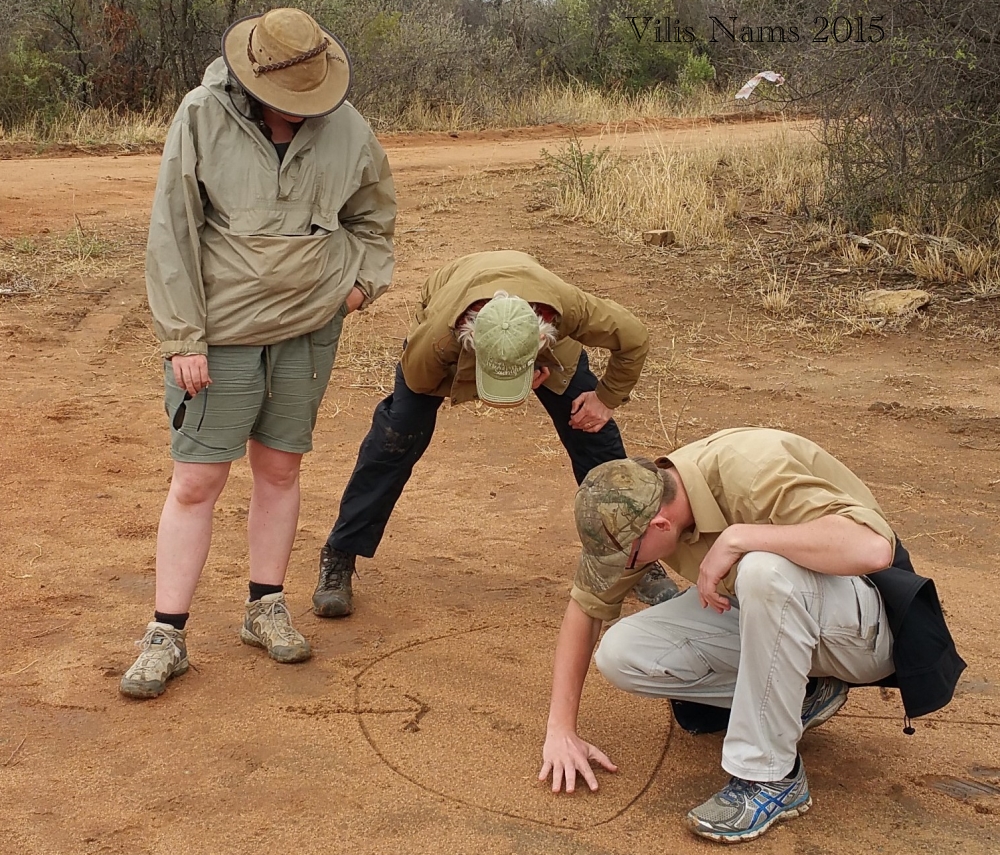 In the “classroom,” studying tracks. That’s me in the centre and Jānis on the right. (© Vilis Nams) 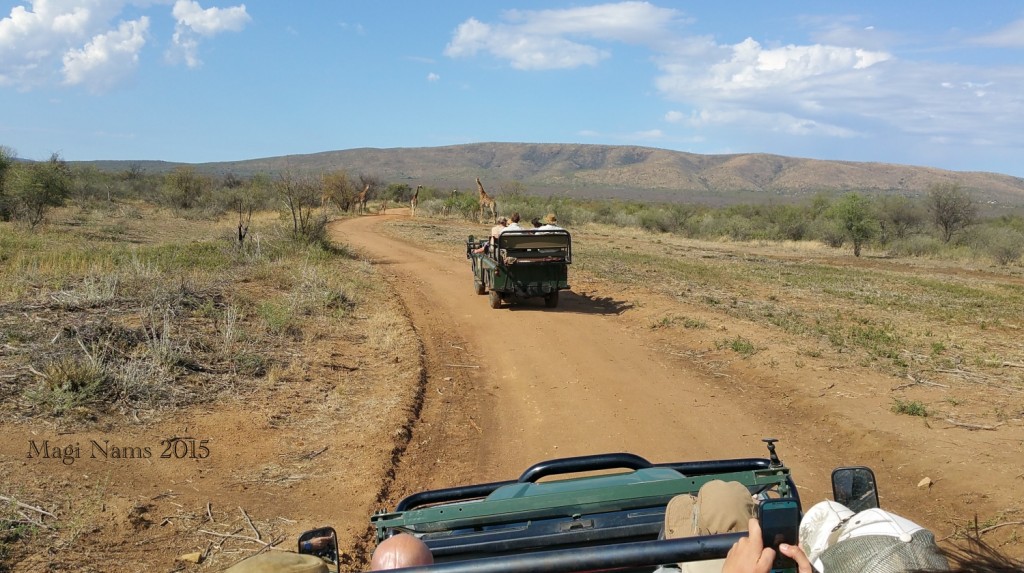 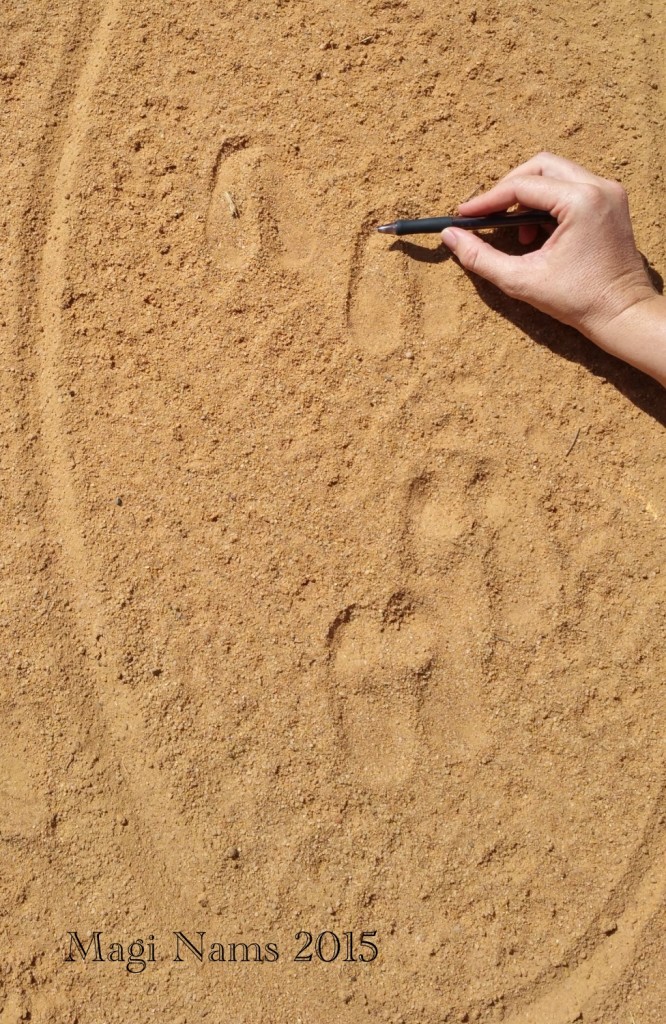 Early on the first morning of “classes,” Vilis, Jānis, and I quickly realized that we were in for a steep, hands-on learning curve. Our instructor, Linky, explained that Limpopo Field Guiding Academy teaches by assessment. In other words, she would circle animal tracks or sign, or draw an arrow in the sand or mud to indicate the example, and then it was up to us to make our best guess as to which animal had left the spoor. No disturbing the track or anything near it. No discussing it with other students. No looking at the handbook. After examining several tracks, we were to individually quietly tell her our answers, and after everyone had reported to her, she would discuss the sign and tell us, as a group, which animal had made it.

Vilis, Jānis, and I exchanged somewhat panicked looks before diving in. Jānis had only been in South Africa for six days, and although Vilis and I had been in the country for five months, there were many South African animals we’d never seen in the flesh, let alone their tracks and other sign! 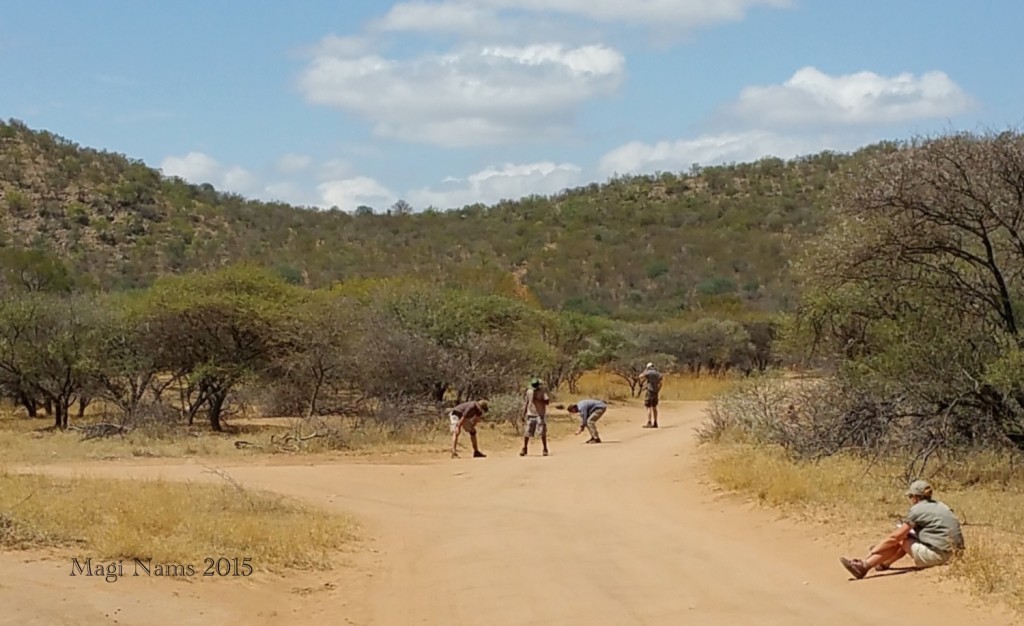 Reading Tracks on the road at Mabalingwe (© Magi Nams) 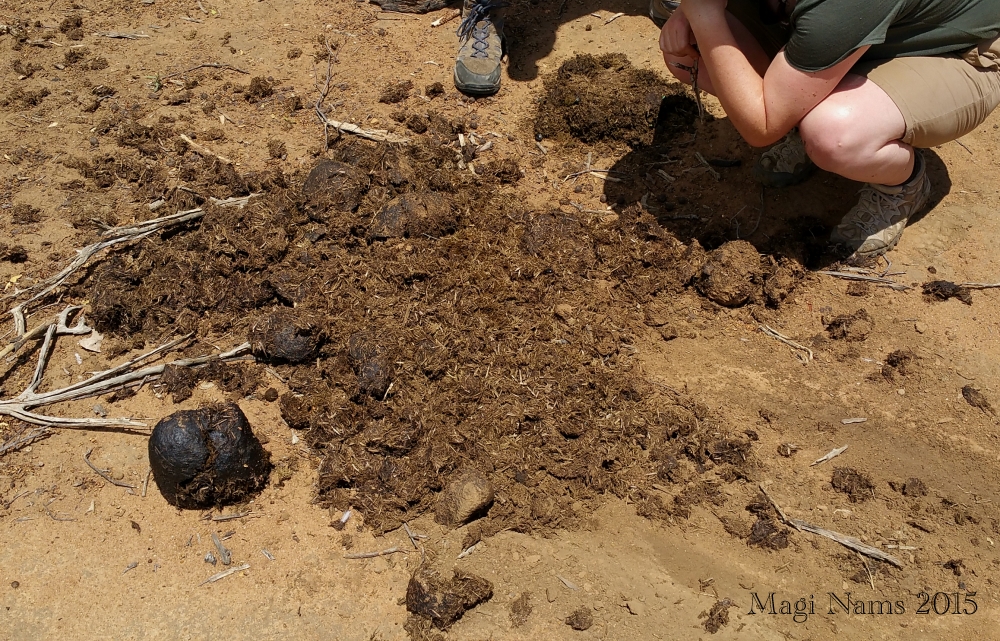 That first day was a humbling, mind-stretching blur of visual information that ranged from an antlion pit (which I actually recognized, thanks to our morning walk in Kruger) to a patch of orangy-coloured tree bark that had been smoothed by a blue wildebeest bull rubbing its preorbital gland (in front of the eye) against the bark as a territorial marking. From scattered pellets of surprisingly small giraffe dung – boxy, with a dimple in one end and a little point on the opposite side, to huge spreads of white rhino dung filled with grass pieces and covered with black “candy coating.” From a millipede trail that I thought was a snake trail, to a jackal trail that looked a lot like the trails my dog used to make, so I guessed that one correctly. From holes bored in old wood by wood-boring beetle larvae, to a bark strip torn off a tree by an elephant. 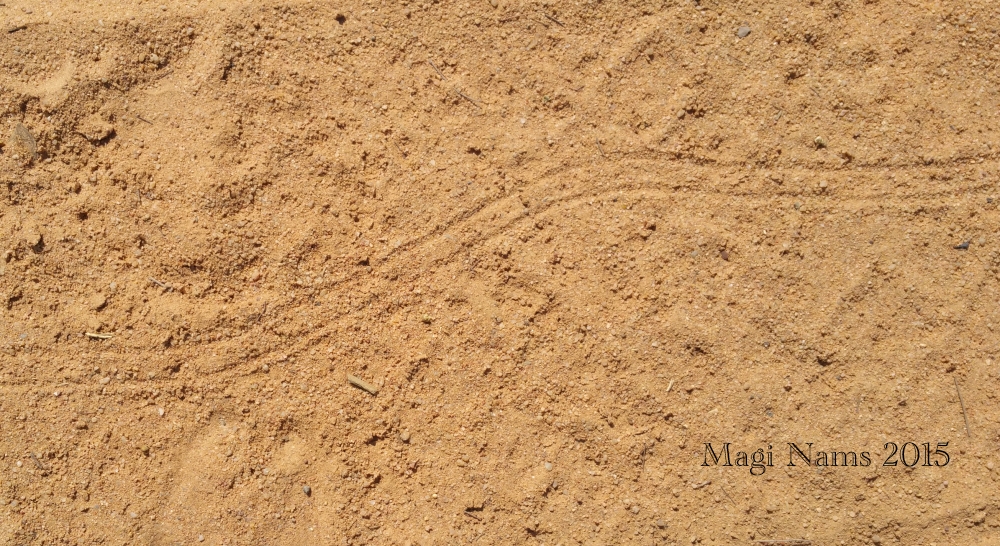 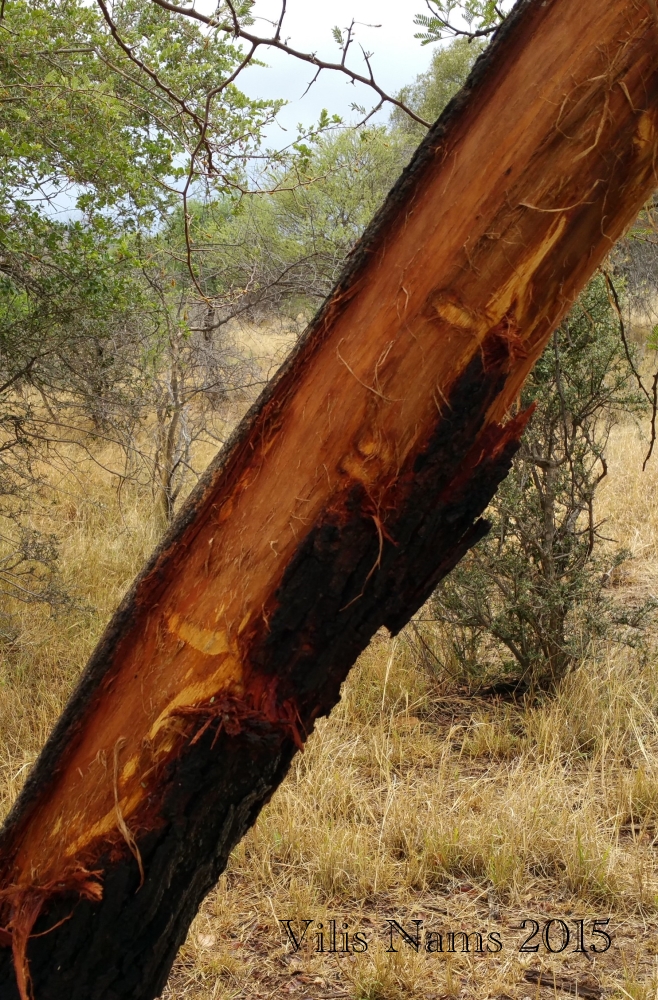 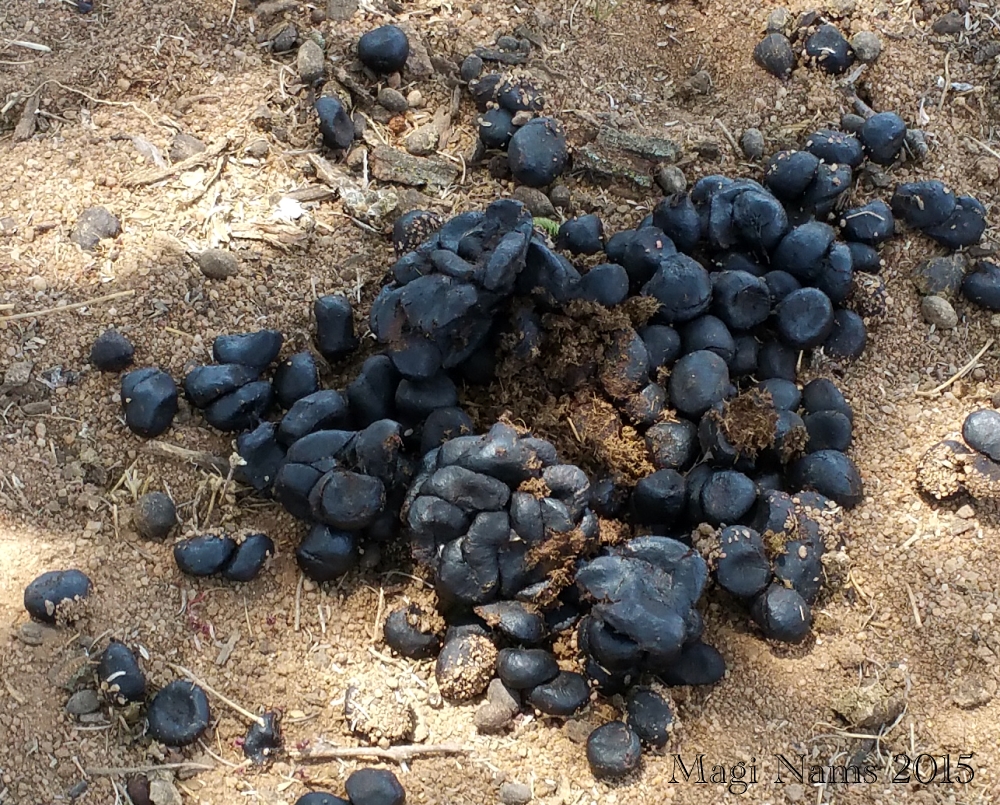 At the end of the day, I scored 43 out of 100. That evening, I studied big time and pored over the day’s questions, trying to familiarize myself with the tracks of mongooses and leopards and hyenas and birds and tree squirrels and six million kinds of antelope… Shape. Size. Toe pattern. 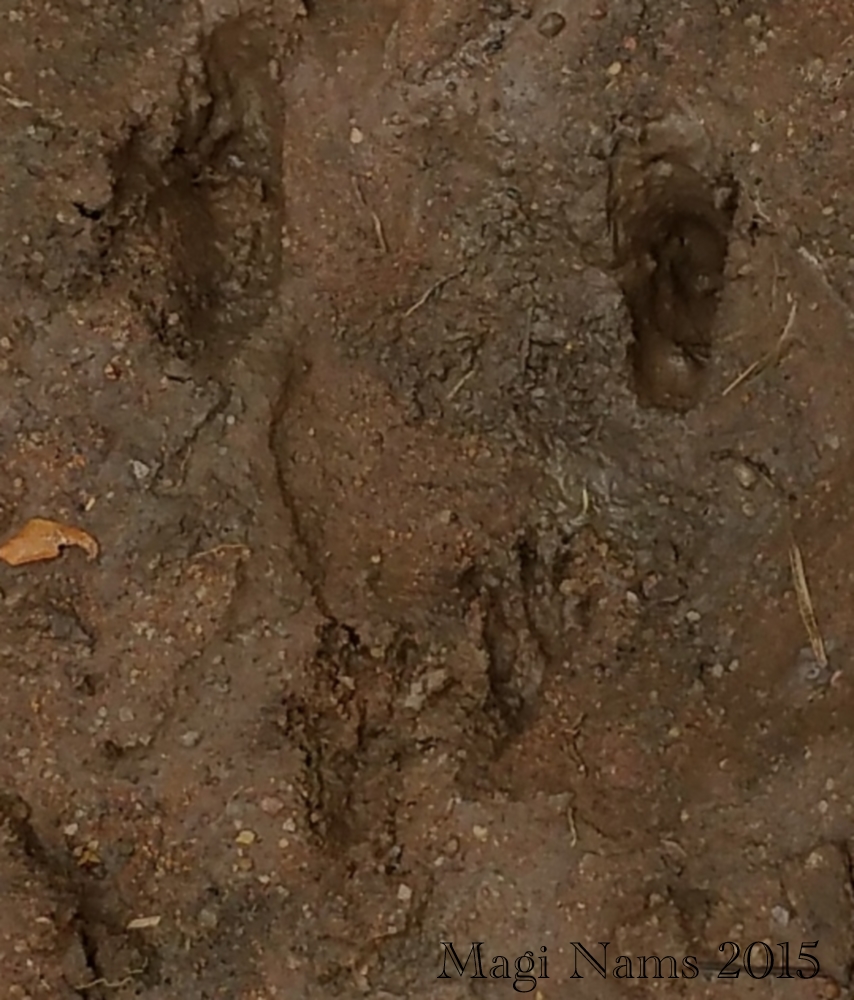 The next day and for the rest of the week, we had a different instructor, Tiz, and were allowed to study our handbooks between sets of tracks. However, the learning curve of reading African animal tracks and sign took a sudden climb. Not only were we asked to identify the species that made a track, we sometimes had to identify the animal’s sex, which particular foot had made a track, and the gait at which the animal was moving.

I learned that female hippos drop their dung in a pile, but male hippos back against a shrub and flick their tail back and forth while defecating, so the faeces are sprayed over a wide area as a scent mark. I learned that brown hyenas’ front feet are much larger than their back feet and that their tracks show pads with a lobe that hangs to the outside, a good clue to picking out the correct foot. I learned that tree squirrel tracks show hops, with hind feet landing ahead of front feet, just like tracks of red squirrels back home in Canada (got that one right!). I learned that warthog tracks are 4 centimetres long, have boxy toes, and sometimes show dew claw marks, and that bushpig tracks look sort of like a Pac-Man with dew claws. I particularly learned that any bird track that’s about 10 centimetres long with a rear claw impression and no webbing can be explained by a single answer: guineafowl. 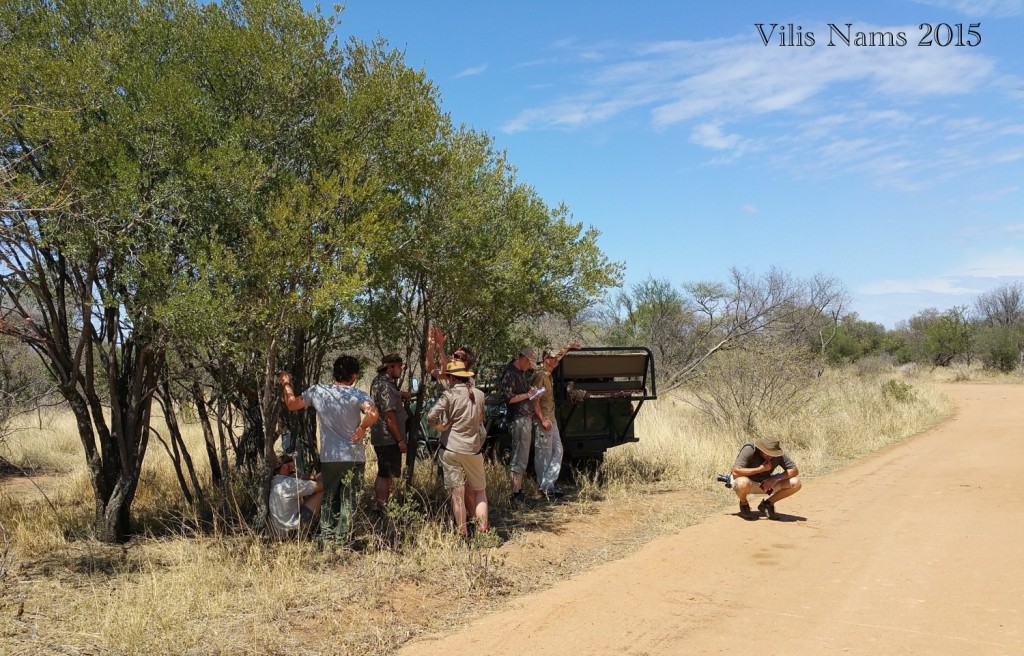 Waiting in the shade for everyone to finish reporting, at Mabula. (© Vilis Nams) 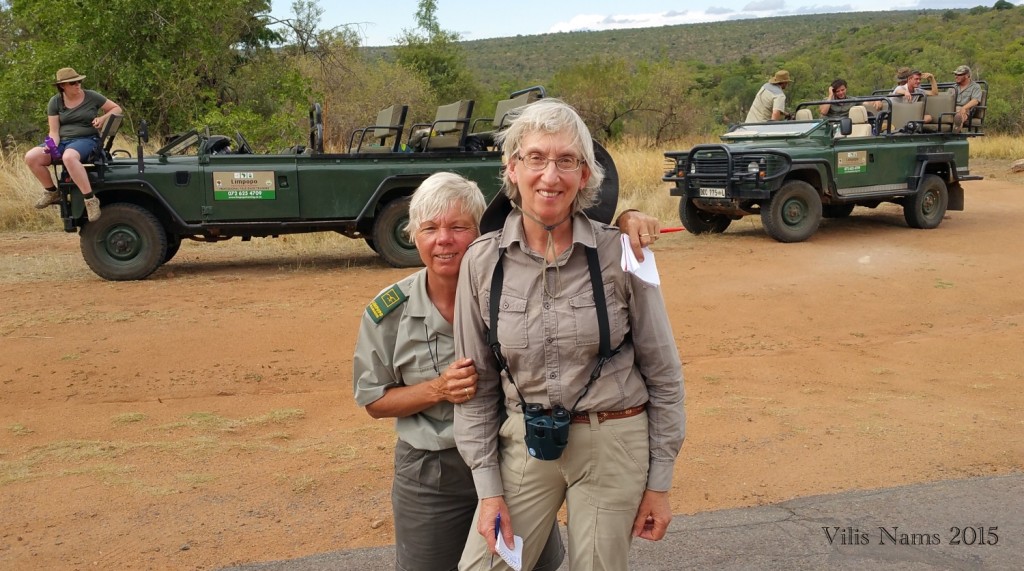 Here I am with birder extraordinaire, Janesta (© Vilis Nams)

All week, my mind reeled with measurements. My hand became my ruler. If I folded back the middle and fourth finger on my right hand, the gap between my index and little fingers was 5 centimetres, the length of an impala track and a little longer than a warthog track. The distance from the tip of my right index finger to the middle of the knuckle at its base was 10 centimetres, the length of a guineafowl track and a little longer than a kudu track, but a little shorter than a blue wildebeest front hoof track. I learned about steps within tracks as well as steps between tracks, and which antelope hoofs did or didn’t have steps (little ledges on the underside of the hoof). 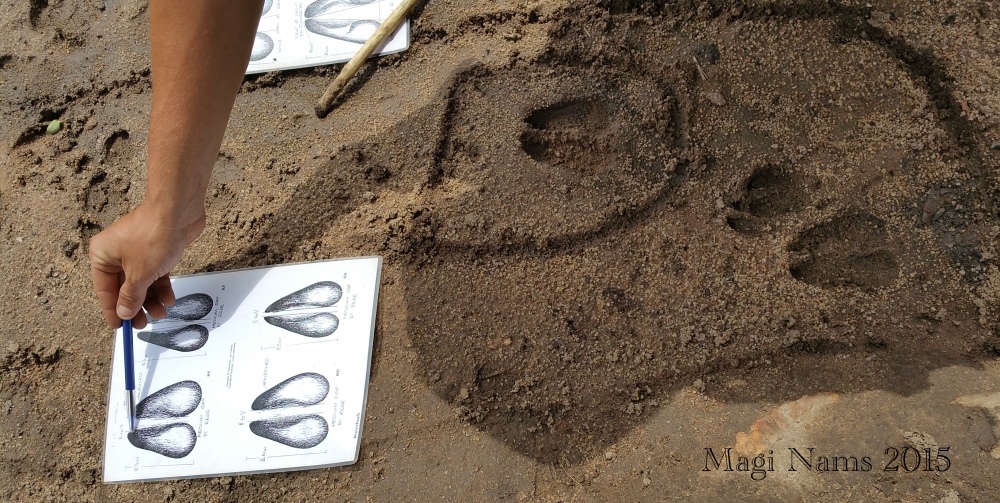 Throughout the week, I mentally kicked myself time and again for giving what turned out to be ridiculous answers (like the curved bits of a snake track that I somehow thought was an ostrich track) or second-guessing myself and missing out on the correct answer (like thinking red hartebeest but saying waterbuck instead because we hadn’t seen a single hartebeest track yet, and was there really even a step in that track?). My score jumped up to 64 on the second day and stayed in the mid-60s range for the rest of the week as I continued tracking South African wildlife. Vilis pulled ahead of me by a point on the final day, and Jānis quickly outshone both of us, which is as it should be. 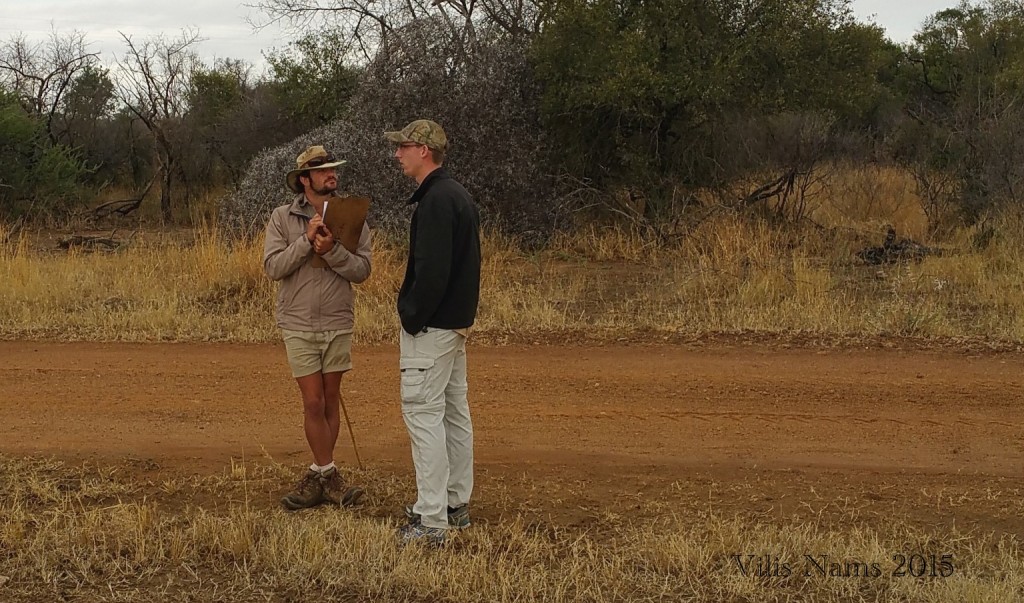 Along with trying to wrap our minds around African spoor, we experienced a few other jolts and perks during the week. Baboons raided a cabin while we were away from camp. A herd of buffalo caused us to retreat to the vehicles and leave the area, in the middle of identifying tracks. A giraffe family with a calf obligingly hung around for photos. 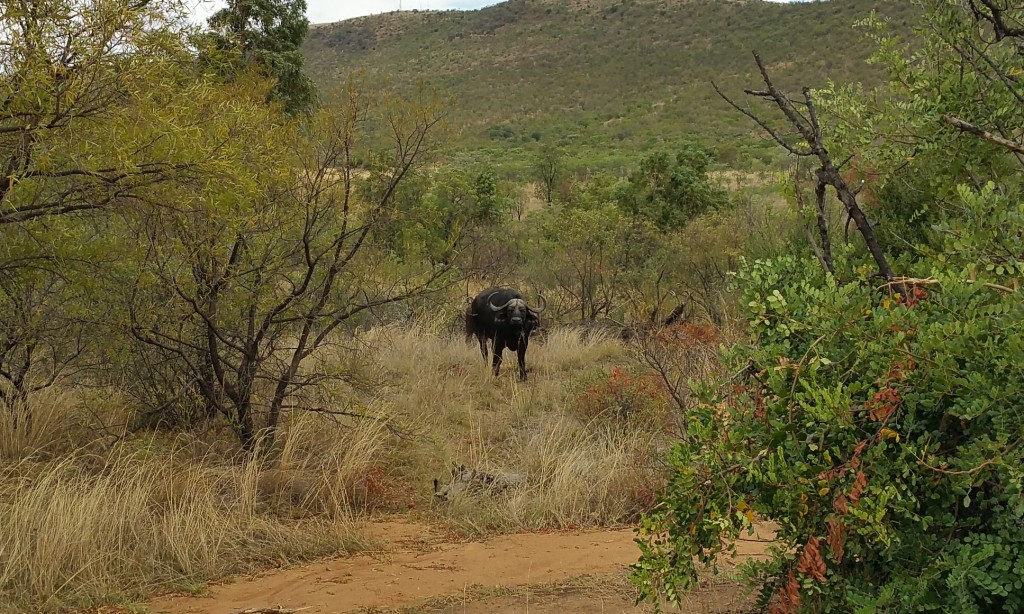 In the end it came down to this: not only did Vilis, Jānis and I learn an incredible amount about tracking wildlife in Limpopo in a very short time, we also had an unparalleled opportunity to spend long days in the outdoors, mostly on foot, with an enthusiastic and welcoming group of “bushies” and to catch intriguing glimpses into the lives led by animals in the African wild. Well done, Limpopo Field Guiding Academy! 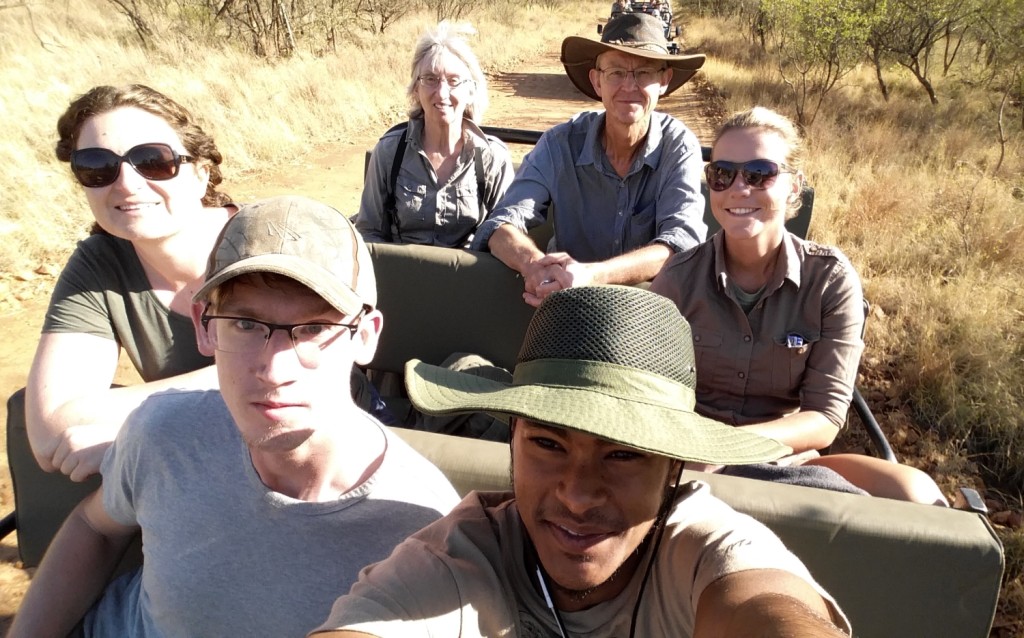 A truck of trackers! Jānis is at front left, Vilis is at back right, and I’m at back left.