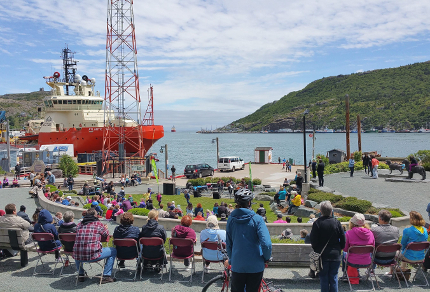 Provincial capital and the easternmost city in North America, St. John’s,  Newfoundland and Labrador is tucked against the Avalon Peninsula’s rugged shoreline on the island of Newfoundland, affectionately known as “The Rock.” St. John’s might also be the oldest English-founded settlement in North America. Fishing camps found there date back to the early 1500s. (Tap on photos to enlarge.) 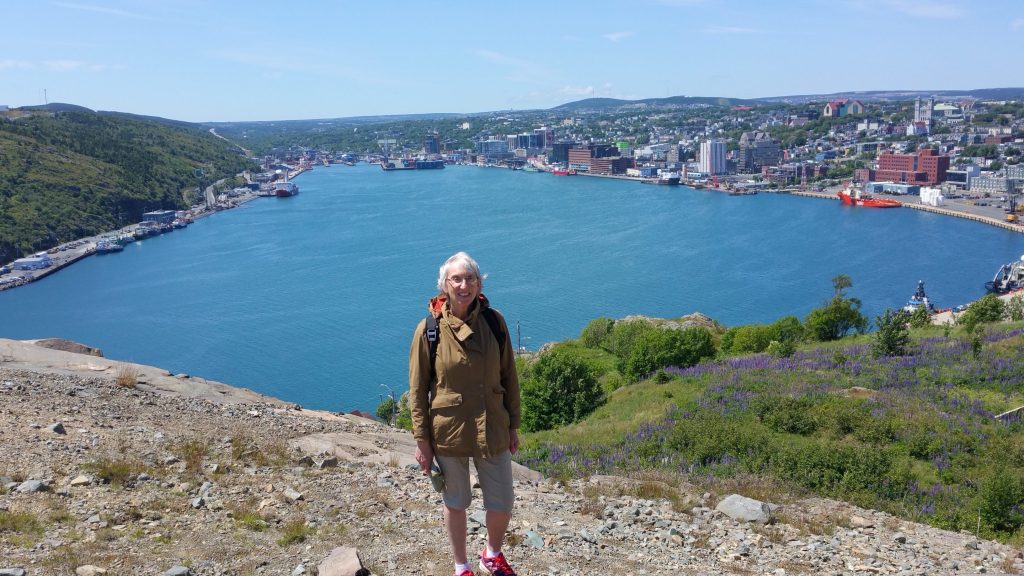 Here I am on Signal Hill, with St. John’s behind me. In the upper right, note the provincial museum and art gallery, The Rooms, with its brick-red peaked roof, and the grey turrets of Anglican Cathedral St. John the Baptist.

In early July, I spent a week exploring St. John’s on foot while my husband, Vilis, attended the Canadian Society for Ecology and Evolution (CSEE) conference hosted by Memorial University of Newfoundland (MUN). Together, he and I also took in three CSEE fieldtrips, including the excursion to Cape St. Mary’s Ecological Reserve I described in my last post. 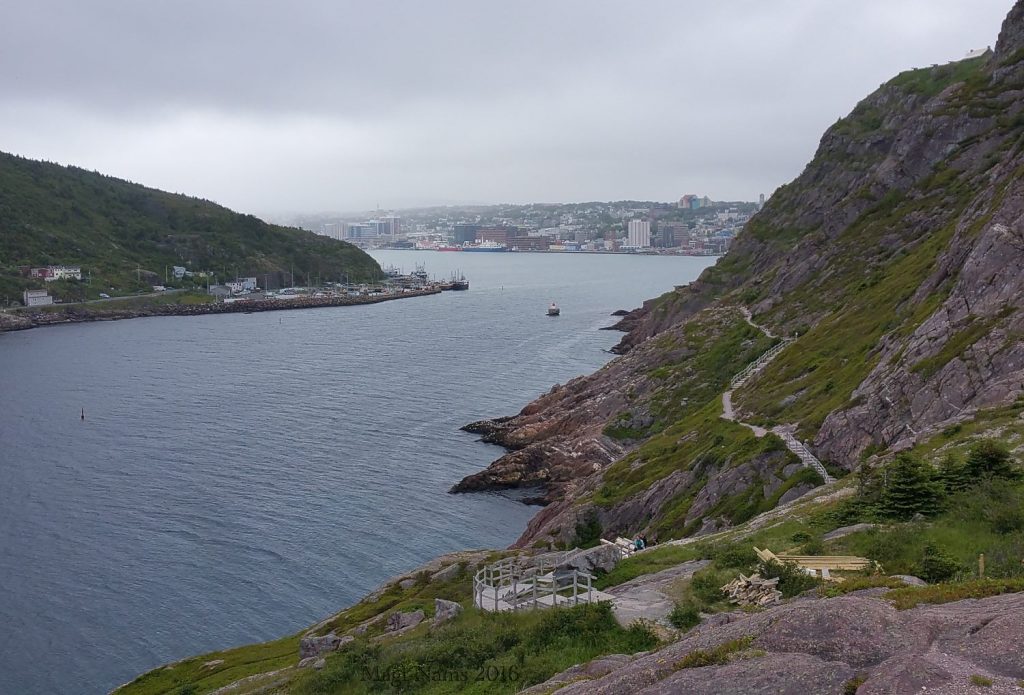 On the first of the other two fieldtrips, we hiked the harbourside slope of Signal Hill, skirting The Narrows, then ascended to the summit, getting rained on in the process. Originally known as the “Lookout,” Signal Hill is an iconic St. John’s landmark now protected as Signal Hill National Historic Site of Canada. A former military stronghold, Signal Hill guarded the The Narrows and the city, originally with batteries of cannons and later, with anti-aircraft guns. It was also the site of the first trans-Atlantic wireless signal, sent from Cornwall, England, and received by Guglielmo Marconi in 1901.

Before we reached the summit, fog rolled in over looming Cabot Tower, which was built around the turn of the twentieth century and named for John Cabot in honour of the four-hundredth anniversary of the explorer’s arrival on The Rock. The tower served as a flag signal station (hence the name, Signal Hill) for six decades, from 1900 to 1960. When we arrived at the top of the hill, the fog was so thick, we couldn’t even see the flag deck. St. John’s was having “caplin weather,” we were told, a reference to warm, wet, foggy weather common during the caplin spawning season in June and July. I knew I’d have to return on a clear day – if we got a clear day – to photograph the tower and views.

After hiking down from Signal Hill to Cuckold’s Cove, we traipsed into the quirky Quidi Vidi section of town, where we warmed up and dried out amid a cheerful clutter of sports memorabilia at Inn of Olde. 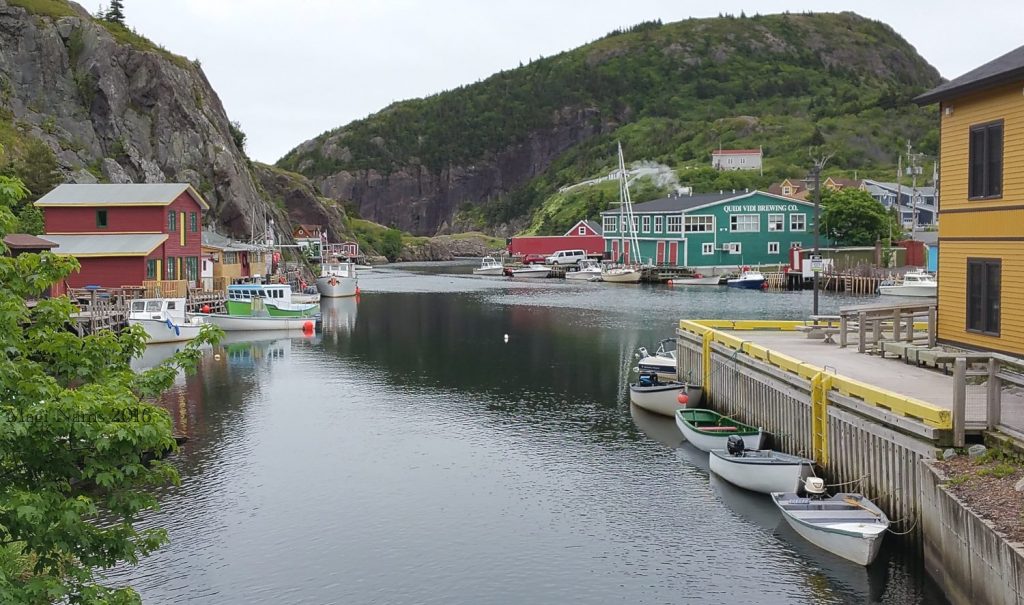 On the second CSEE fieldtrip, we bussed to Middle Beach on the outskirts of St. John’s at dusk and watched for caplin rolling (spawning on the pebble beach). These small fish, which are members of the smelt family, are a mainstay in the diets of north Altantic whales, breeding seabirds and Newfoundlanders. Smoke wafted up from campfires on the beach, and the entire scene had the air of a party. We never did see the caplin rolling, but we toasted marshmallows over a fire and chewed on salty dried caplin. Our guide, outfitted in hip waders, netted a bucket of caplin from the breaking waves. So the fish were there. Just not ready to roll. 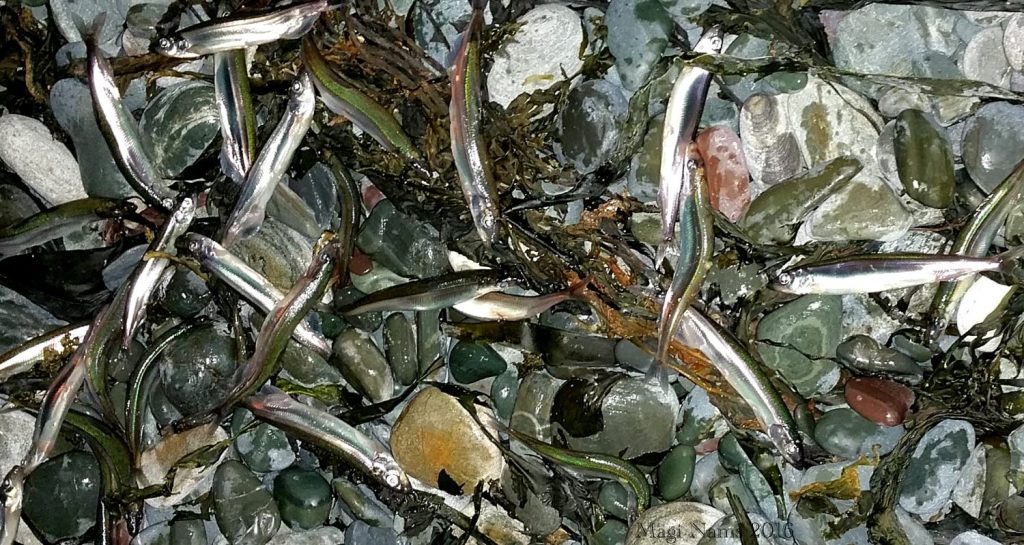 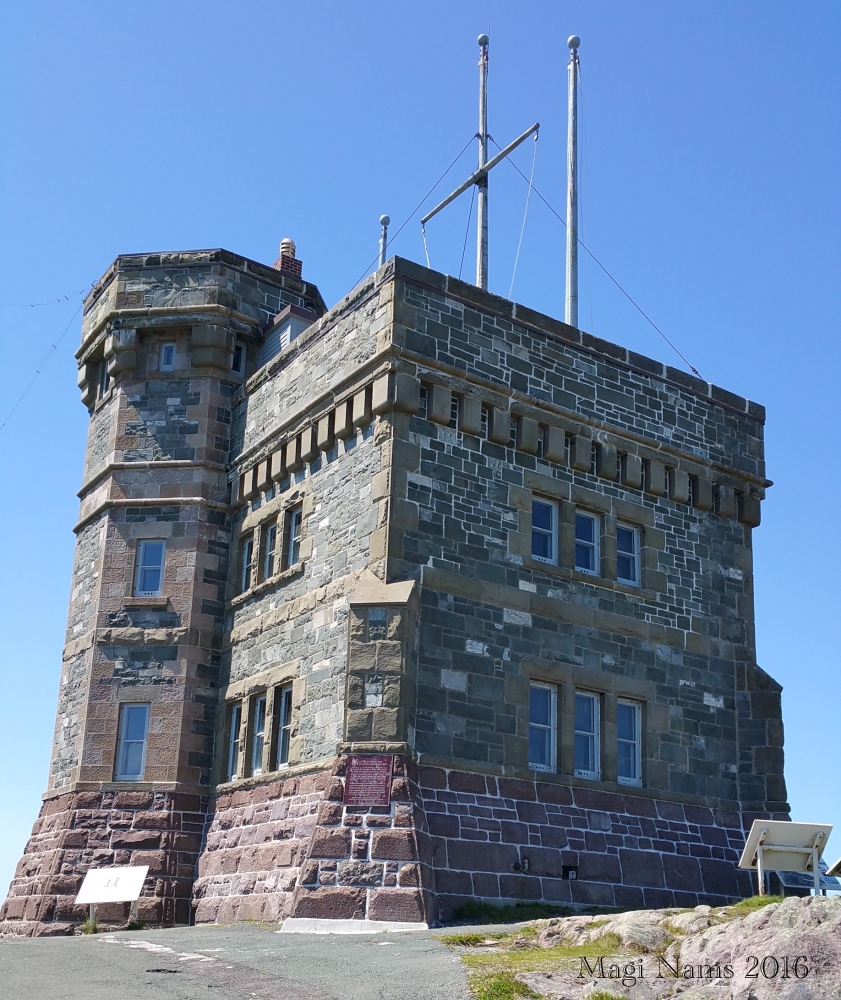 On my own, I explored St. John’s in sun, rain, wind and fog. I climbed Signal Hill two more times, using the more direct route of Signal Hill Road. On the second of these walks, I struck gold and had clear views of Cabot Tower, St. John’s and the headlands stretching all the way to Cape Spear, North America’s most easterly point. Beyond that, the open Atlantic. The spectacular scenes were well worth the hat trick of hikes. I read interpretive signs that held a wealth of information. I wandered among old cannons and purple lupins and gazed down at the ruins of Fort Amherst, with its lighthouse at the mouth of The Narrows. 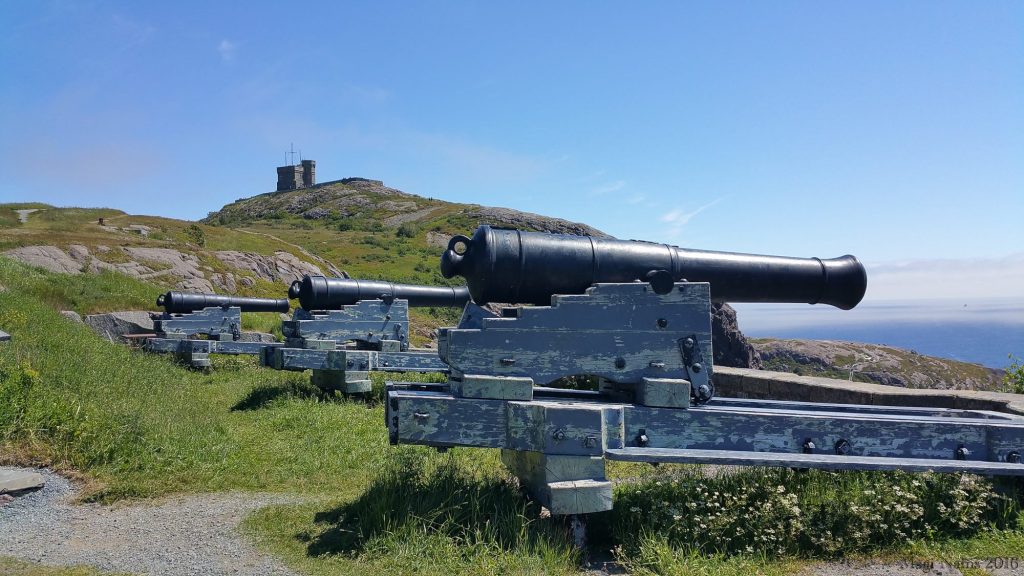 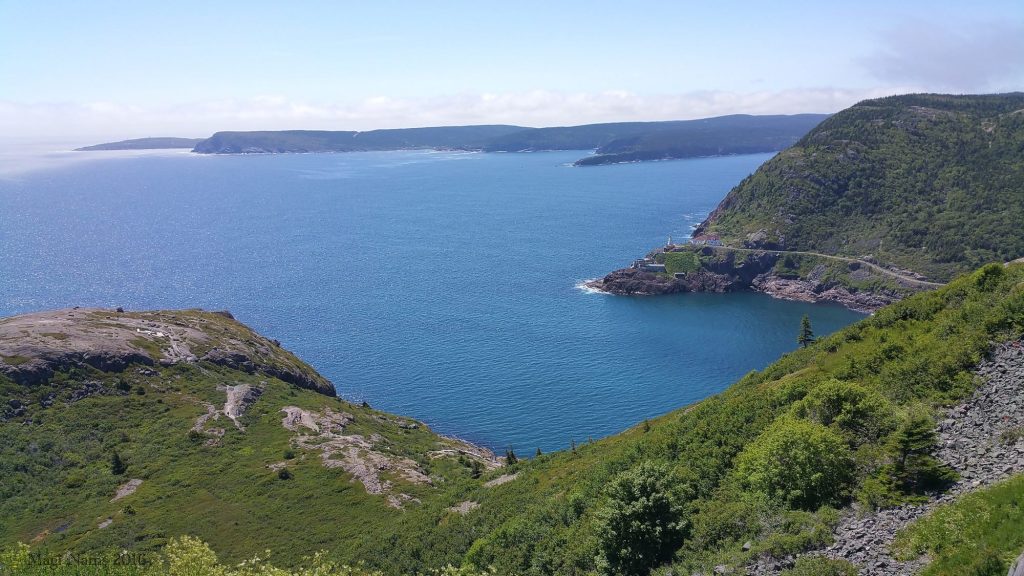 I also birded my way around Quidi Vidi Lake, through Pippy Park and other green spaces, including the MUN Botanical Garden. I watched osprey dive for and capture fish, heard the wild, crazy call of a common loon, and enjoyed rain-spotted pitcher plants, the provincial flower of Newfoundland and Labrador. 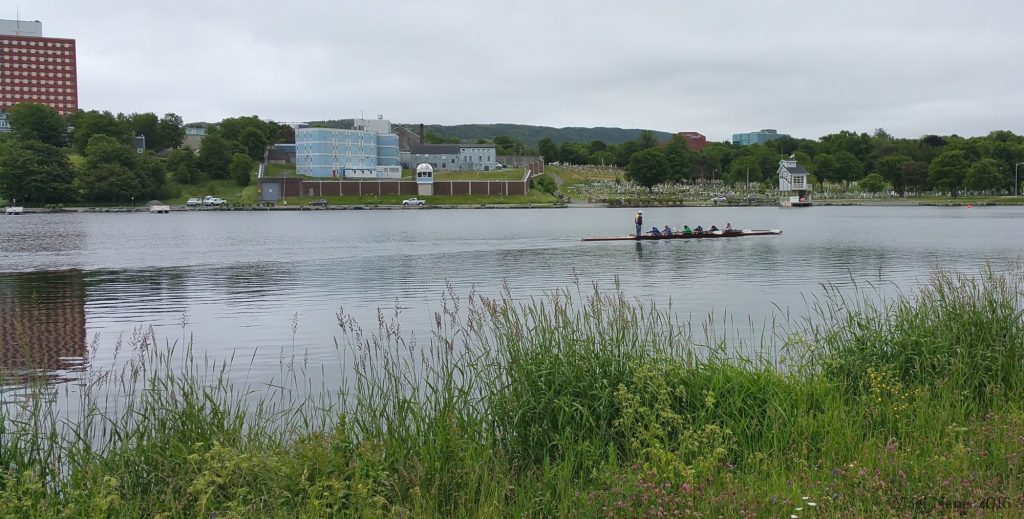 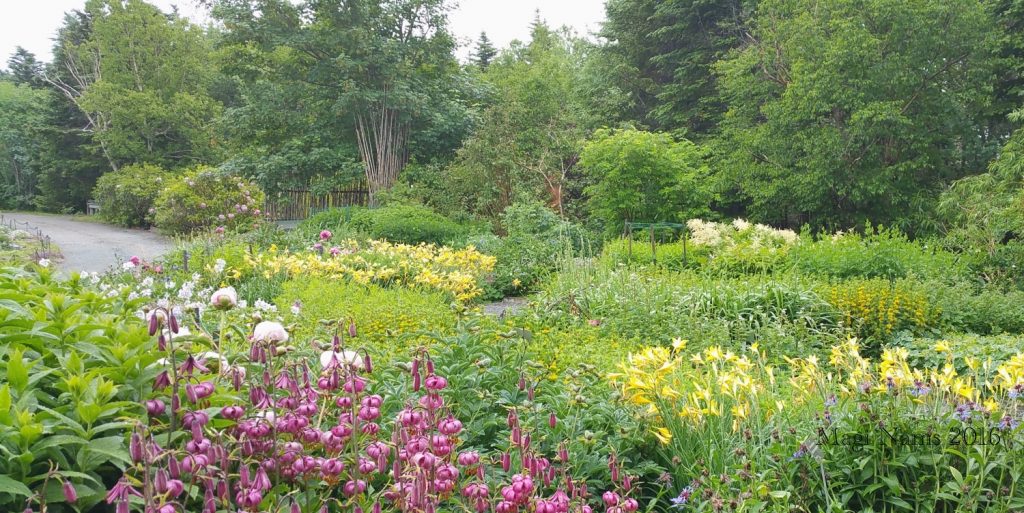 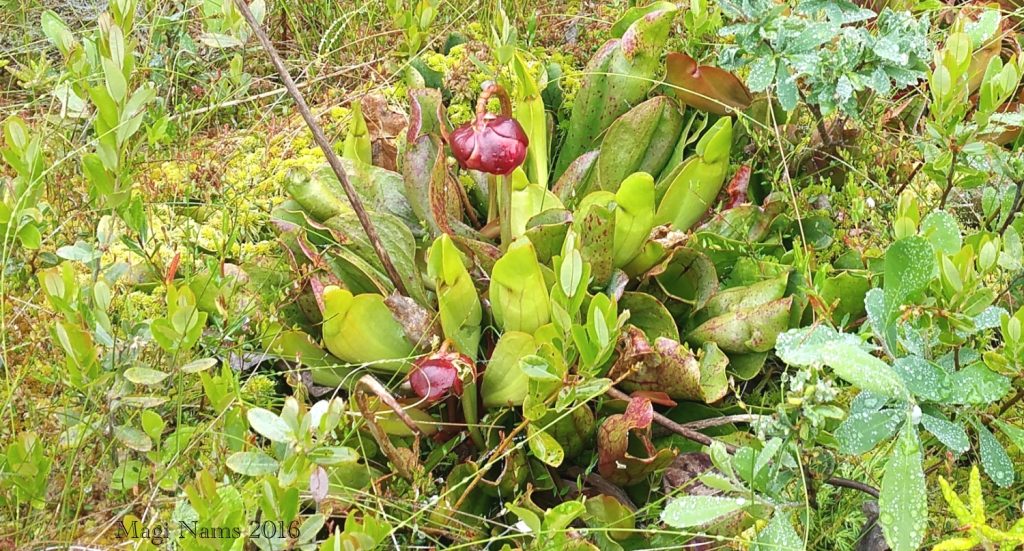 In the heart of St. John’s, I sampled lemon squares and goggled at wall murals. Streets were lined with rows of tall, brightly painted houses. The whole city seemed to vibrate with imagery and colour, perhaps as an antidote to St. John’s notoriously grey weather. 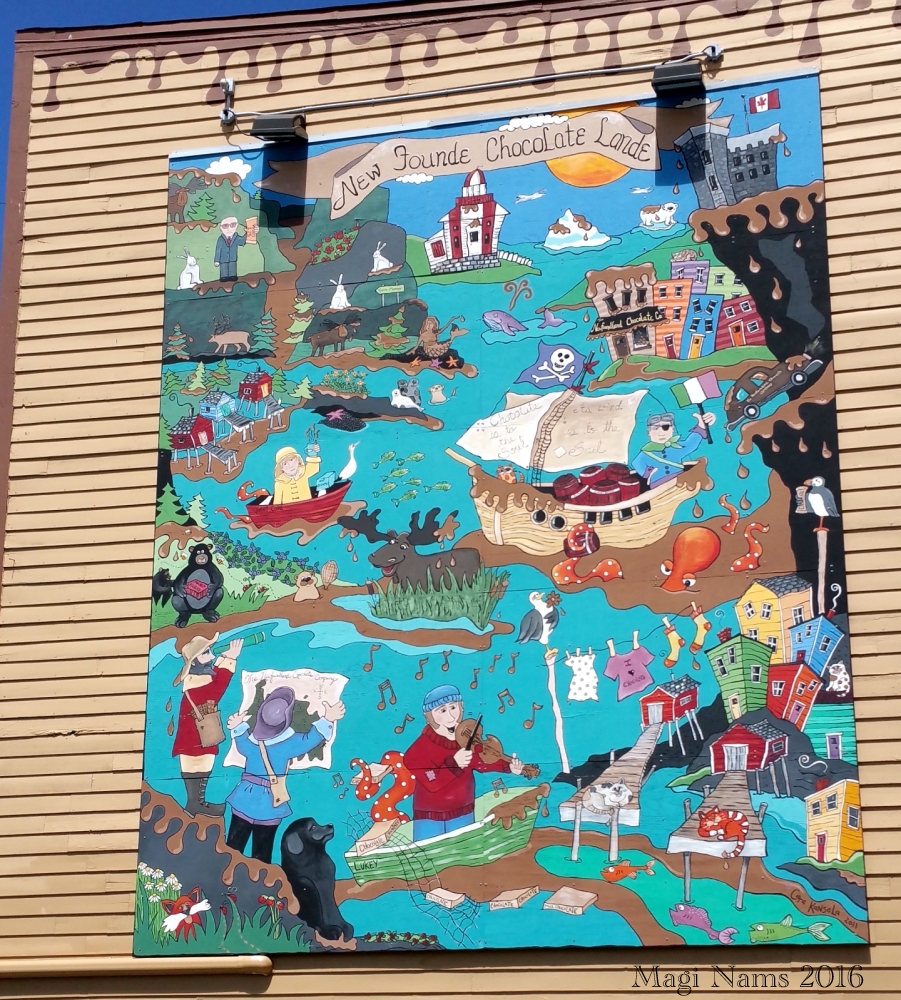 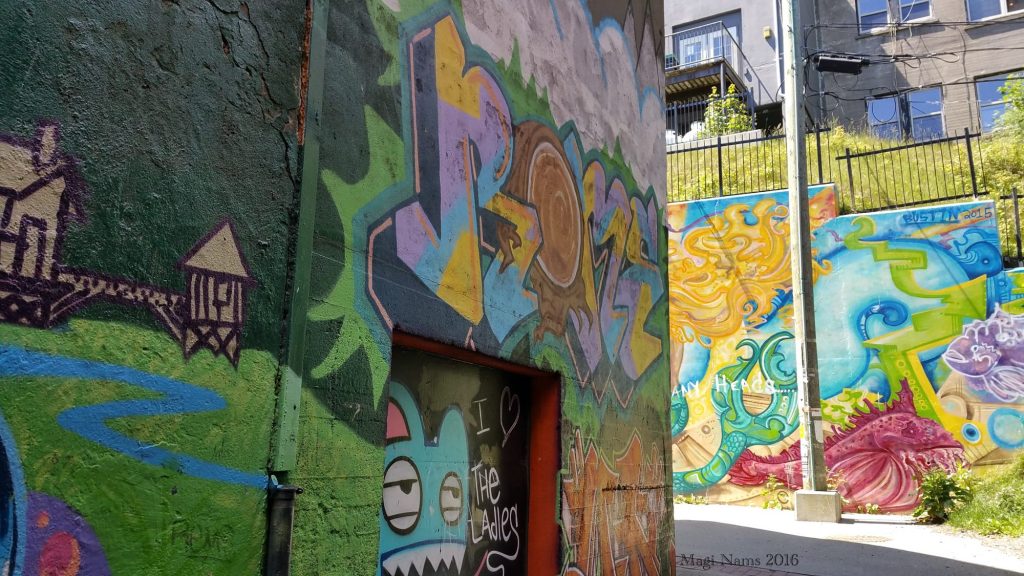 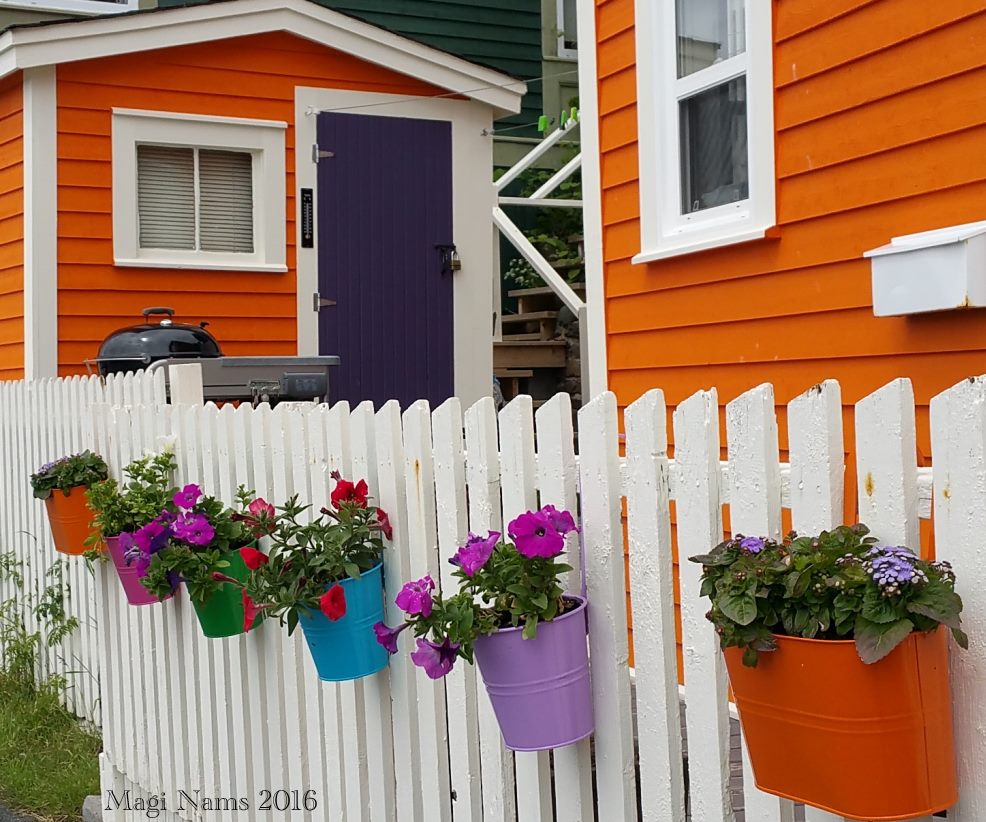 On the one gloriously sunny day I had in St. John’s, ships in the harbour tooted a rumbling, breathy Harbour Symphony of Ship Horns. I was told by an art gallery owner that the horn symphony had been composed specifically for the ships in port as part of an International Sound Symposium. As I walked past Harbourside Park, I paused to catch the last few musical numbers performed by Duane Andrews and the Sizzle Sisters Quartet at an outdoor, lunchtime concert. Hands clapped and children danced as visitors – me included – and St. John’sans (or St. John’sers; take your pick) soaked up sunshine and the strains of guitar, cello, viola, and two violins. Well done, St. John’s! 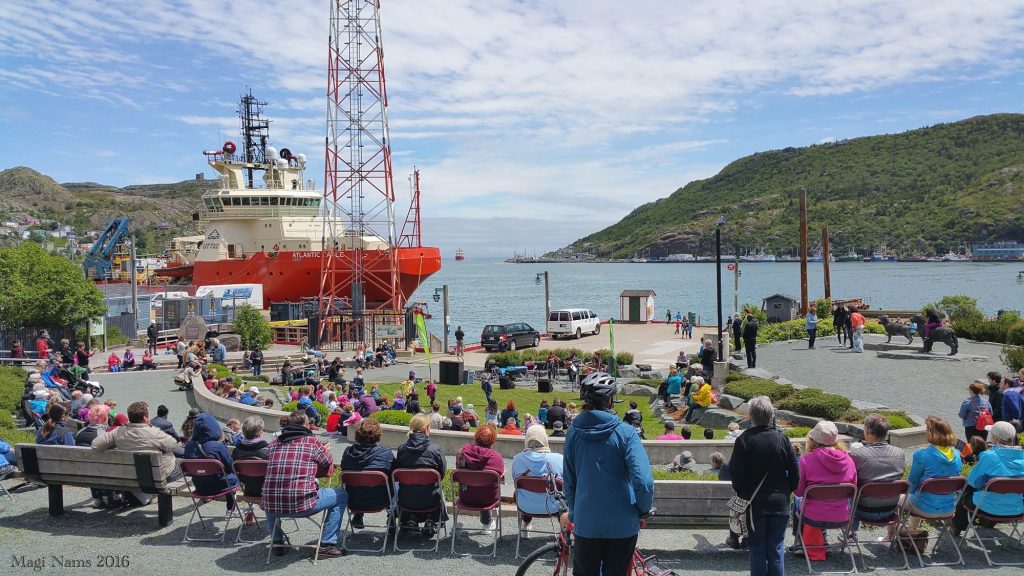 For more information about St. John’s and Newfoundland and Labrador, click here.