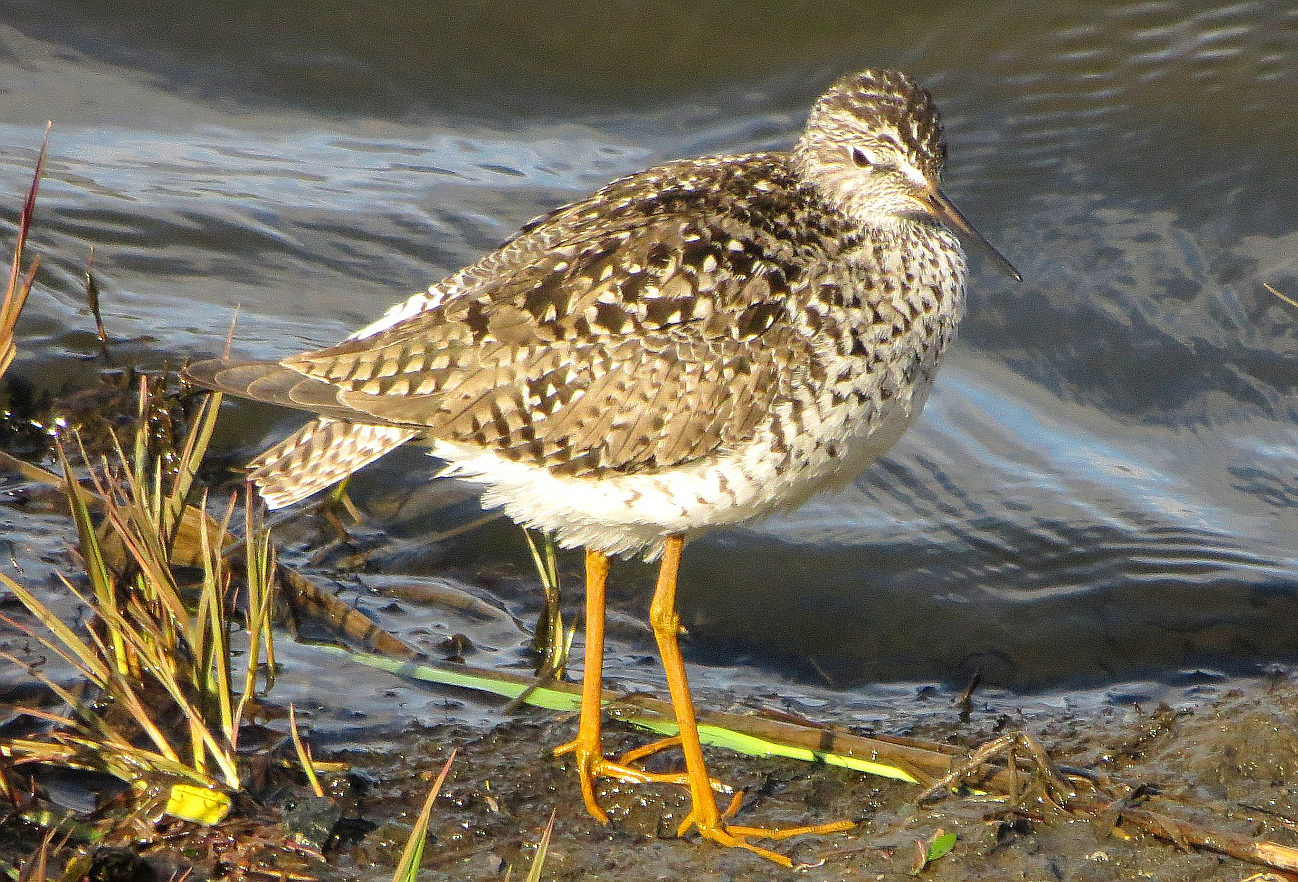 In late May, Vilis and I spent six days based in Anchorage, on Alaska’s southwest coast. As our jet approached the city, gaps in cloud revealed range after range of snow-capped peaks and snow-streaked mountains draped with icefields. Glaciers curved like white tongues among the peaks, and I spotted several cirques – high mountain lakes in round, steep-sided hollows eroded by glacial action. Anchorage itself sprawls across a coastal lowland sandwiched between Turnagain Arm of Cook Inlet and the Chugach Mountains. 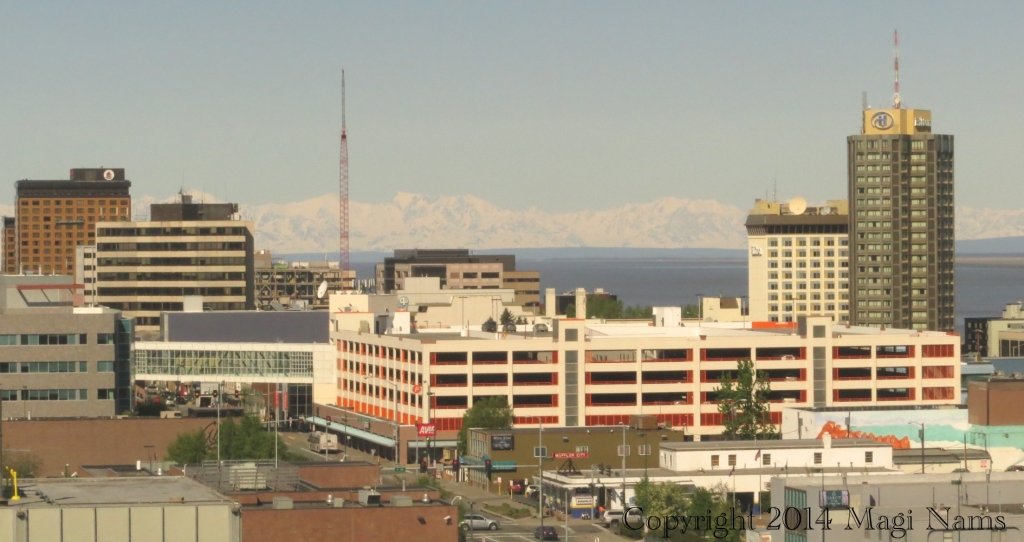 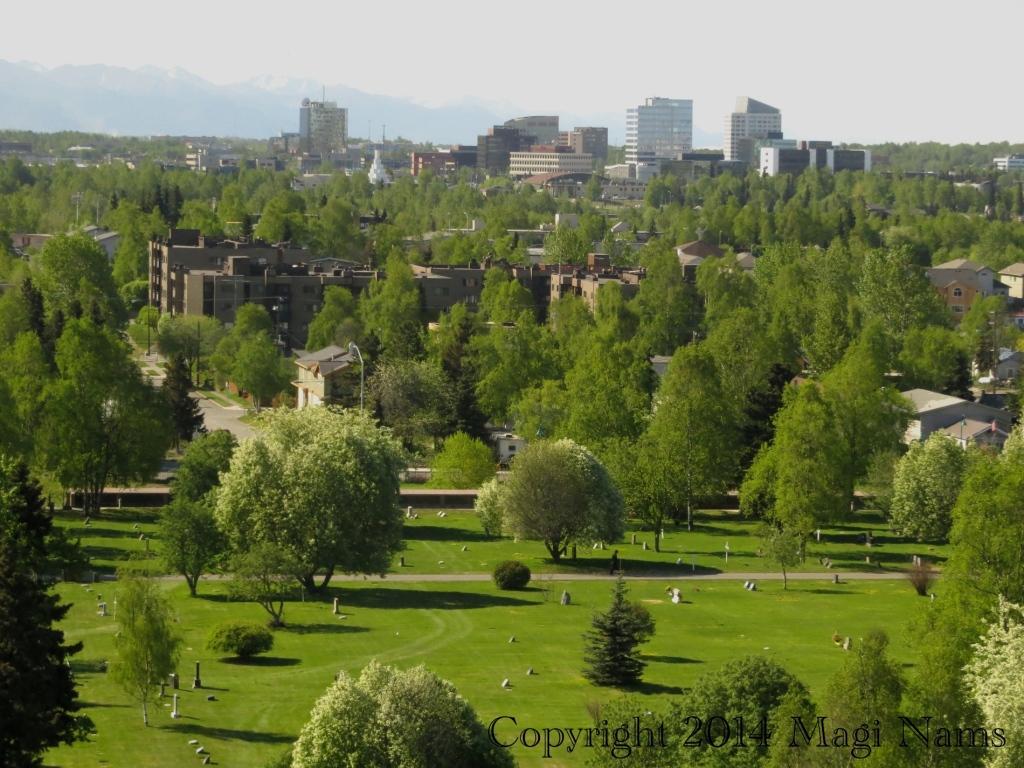 With a population of around 300,000, Anchorage is Alaska’s business hub and largest city. However, its downtown has an open feel and only a few low skyscrapers. On our arrival, Vilis and I were astonished to see city trees leafed out and many shrubs and bulbs in full bloom. The receptionist at the airport information centre told us spring had arrived three weeks earlier than usual. Needless to say, Vilis and I didn’t complain! Nor did the dozens of Alaskans we saw sunbathing or walking in shorts and tank tops as they soaked up the unseasonably warm temperatures of 16 – 22° C (which were warmer than the temperatures at home in Nova Scotia 5600 kilometres to the southeast!). 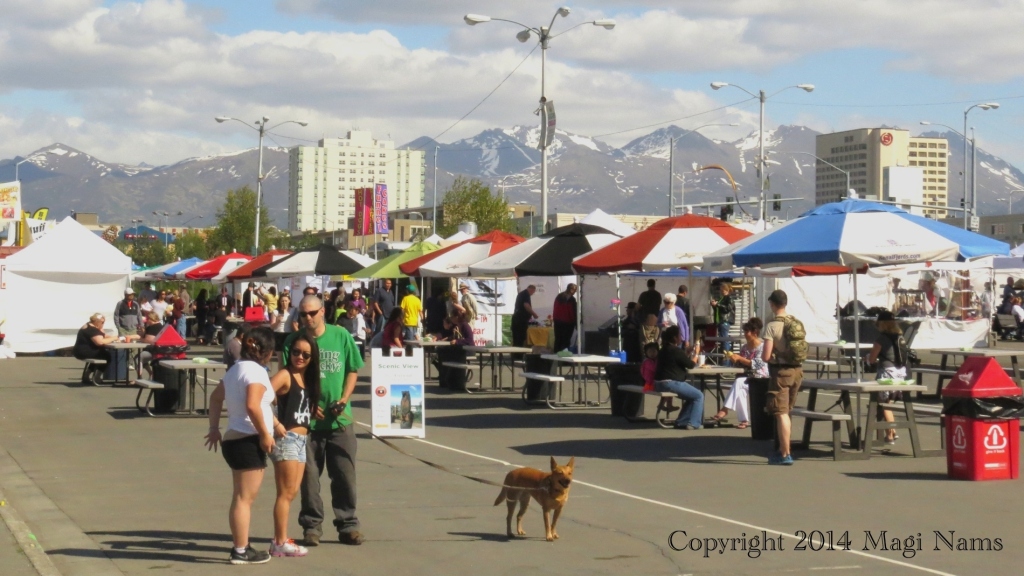 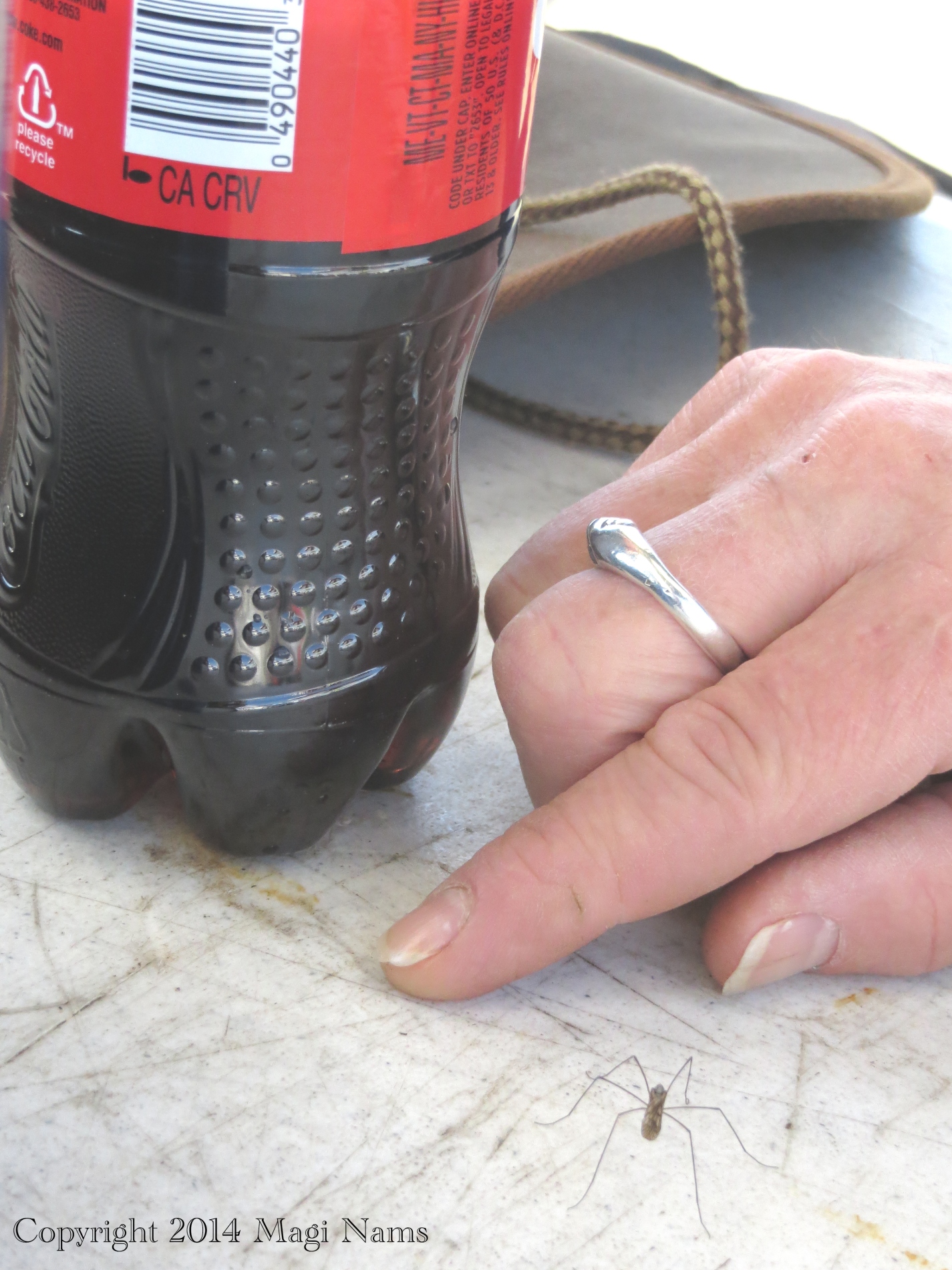 The long, clear days provided perfect weather to explore the city. An added bonus was that the dreaded mosquito and biting fly hordes of the North hadn’t appeared yet, with the exception of a few Alaska-sized mosquitoes that floated through the air and didn’t really seem intent on biting. Perhaps they were as mesmerized by the unending daylight as Vilis and I were. We had to close our hotel room curtains to block out the light so we could sleep. 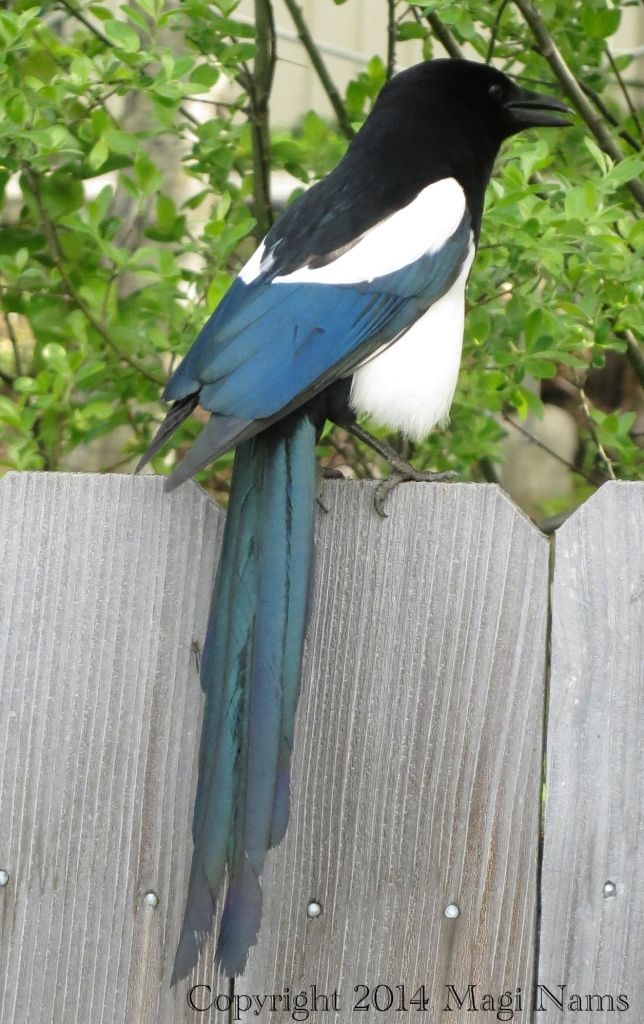 While Vilis attended an International Association of Landscape Ecology conference, I spent many hours spread over three days walking two beautiful trails designed for cycling, walking, and Nordic skiing – Tony Knowles Coast Trail parallel to the ocean shore and Chester Creek  Trail  within Chester Creek Greenbelt. These trails offered a variety of habitats, including marine mudflats, freshwater streams and lakes, a cattail marsh, a brackish lagoon, residential yards with a mix of deciduous and evergreen trees and shrubs, black spruce bog, and mixed forest with lots of tangy-smelling balsam poplar. 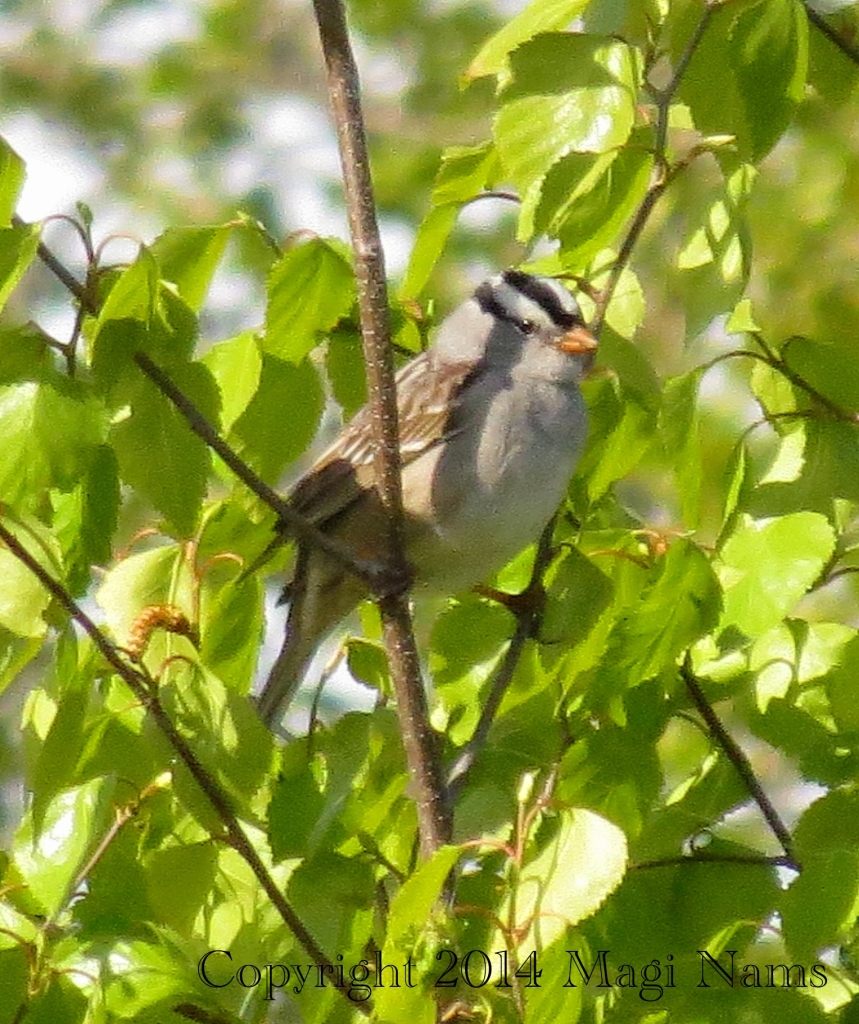 Signs beside the trails warned of possible moose encounters, and elsewhere I read that Anchorage has over thirty resident brown bears, plus black bears. I kept a sharp lookout and did see three moose in various spots along the easternmost third of Chester Creek Trail. No bears, which was okay with me. (I spotted a black bear at the edge of the woods here on our Nova Scotia property last week!) 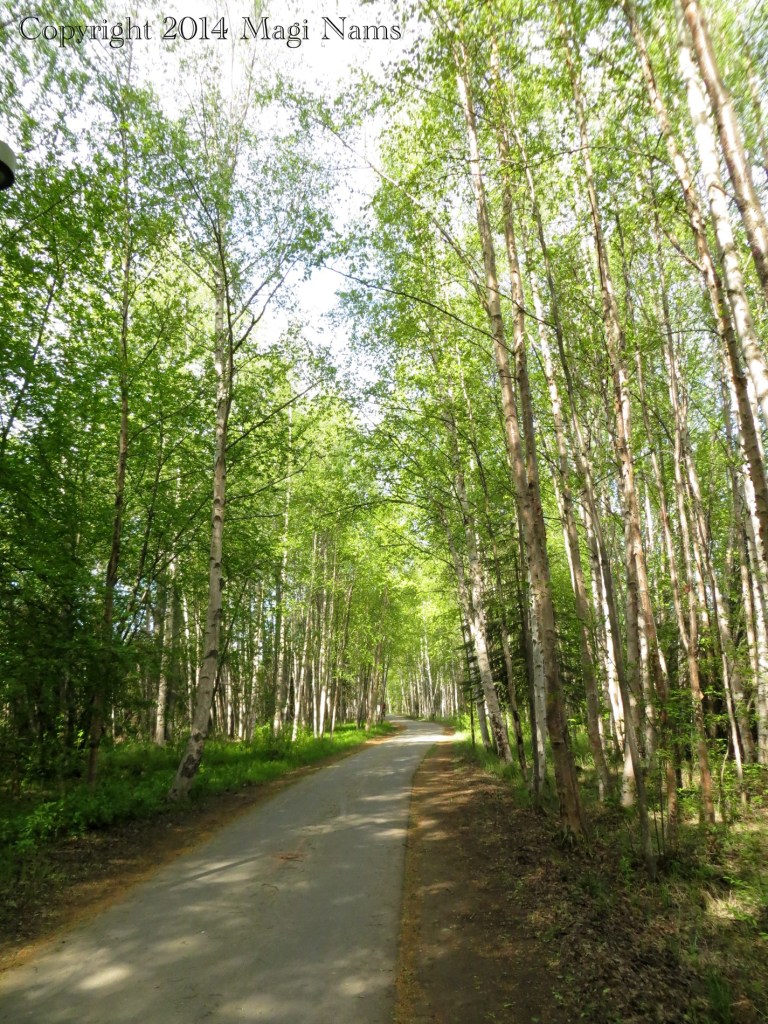 Mew Gulls wheeled over Anchorage, and along with Black-billed Magpies, mobbed a Bald Eagle and Common Raven. I  spotted male White-crowned and Lincoln’s Sparrows, as well as Dark-eyed Juncos, Yellow-rumped Warblers, Black-capped Chickadees, and many American Robins singing in shrubs and trees. A few European Starlings hung out in grassy parks, and a gorgeous male Merlin perched atop a weeping birch in a residential yard, its shrill calls alerting me to its presence.

Westchester Lagoon was a hotspot of avian activity. Red-throated Grebes vocalized raucous mating calls, and I saw three grebes on nests at the edge of an island. Mew Gulls and Arctic Terns also nested on the island. The terns screeched and dived from the air to the lagoon’s surface to capture prey. I saw several Bonaparte’s Gulls on the water and in the air, and a tired-looking Lesser Yellowlegs at the lagoon shore. Greater Scaup, American Wigeon, Gadwalls, Mallards, Green-winged Teal, Canada Geese, and a Ring-necked Duck paddled over the water. Tree Swallows chattered and did their aerial ballet while hunting insects. 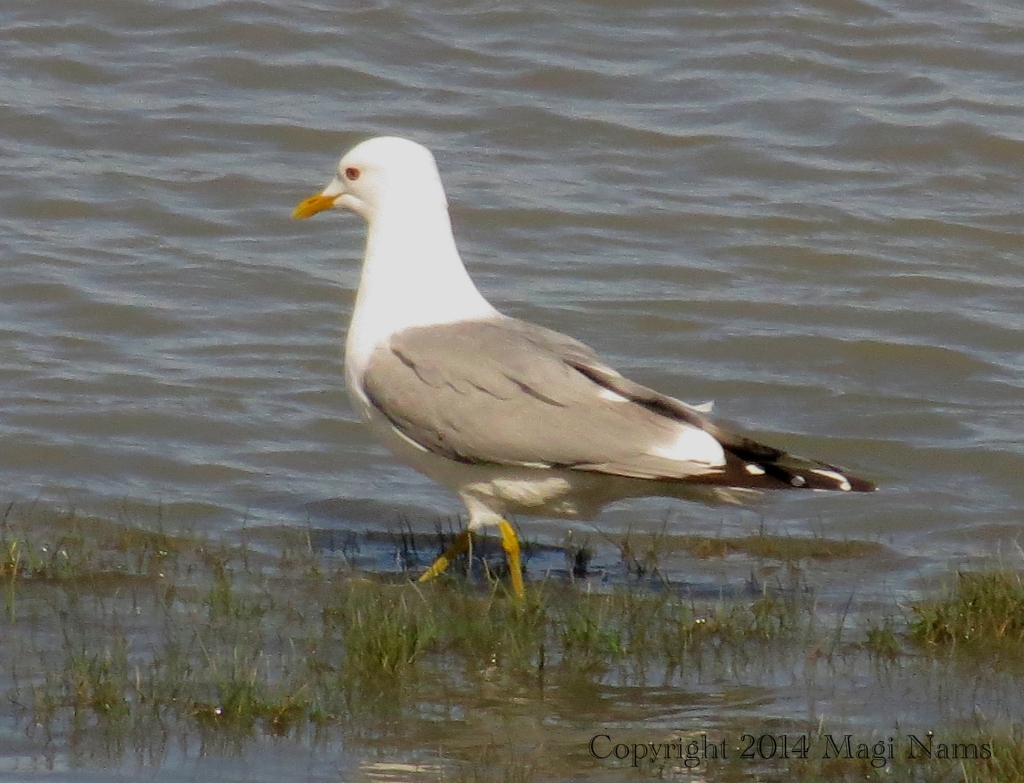 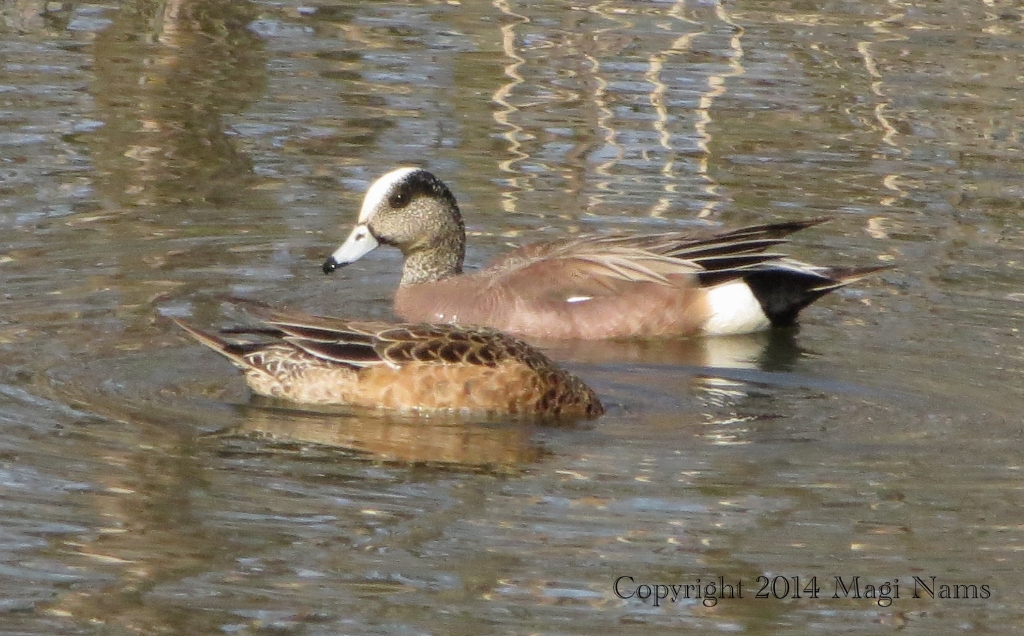 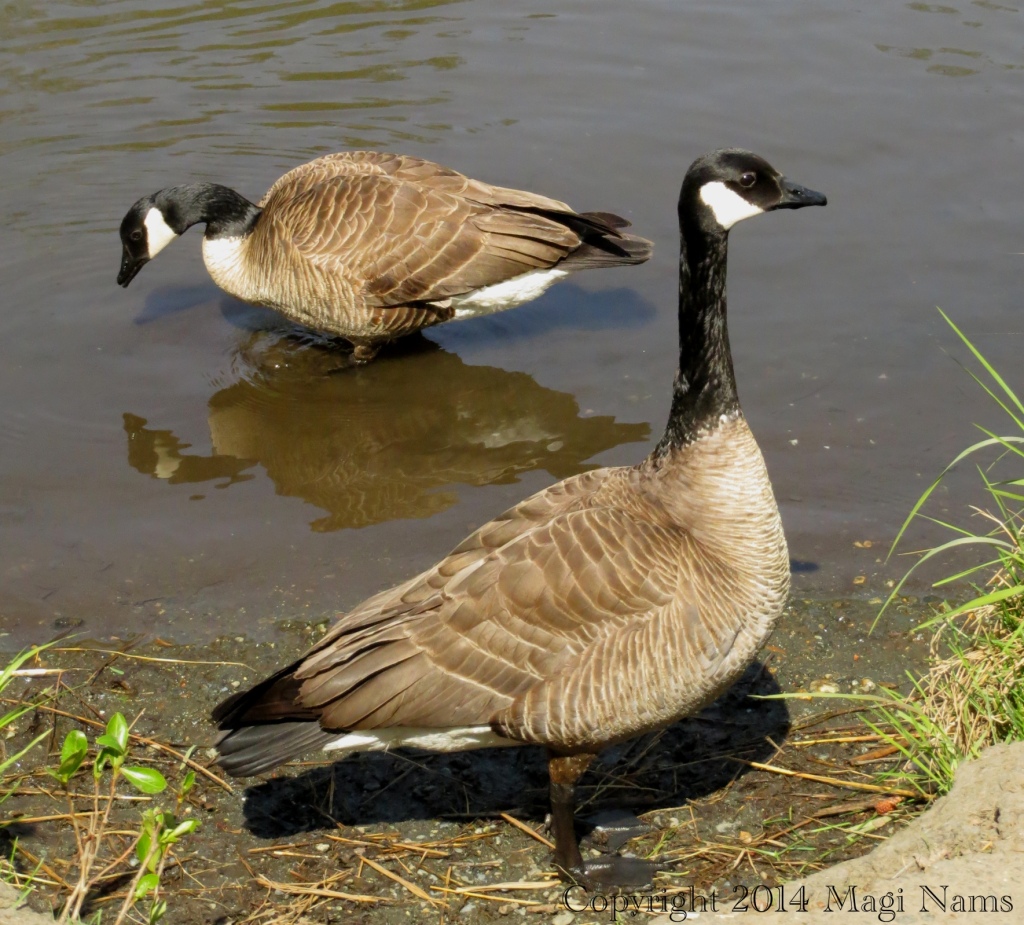 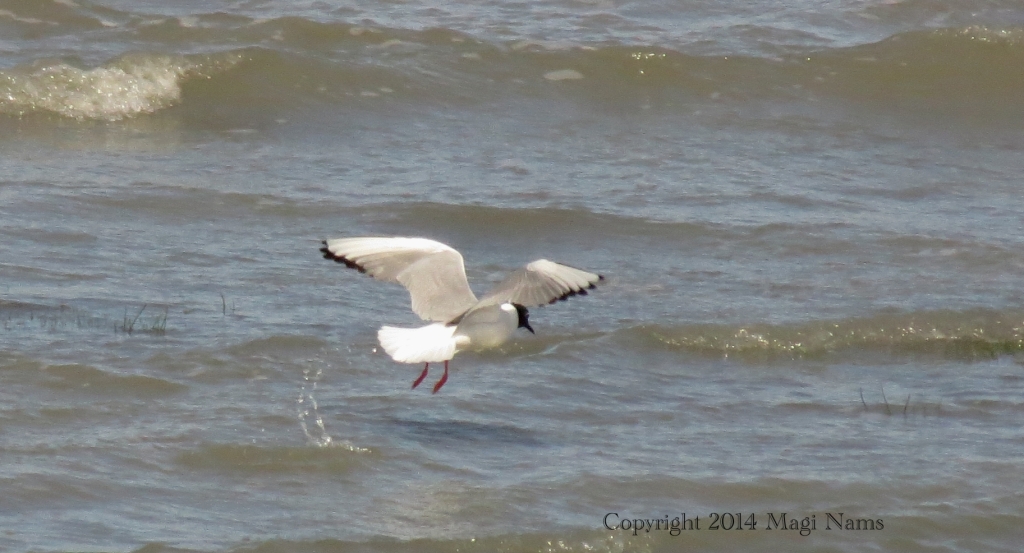 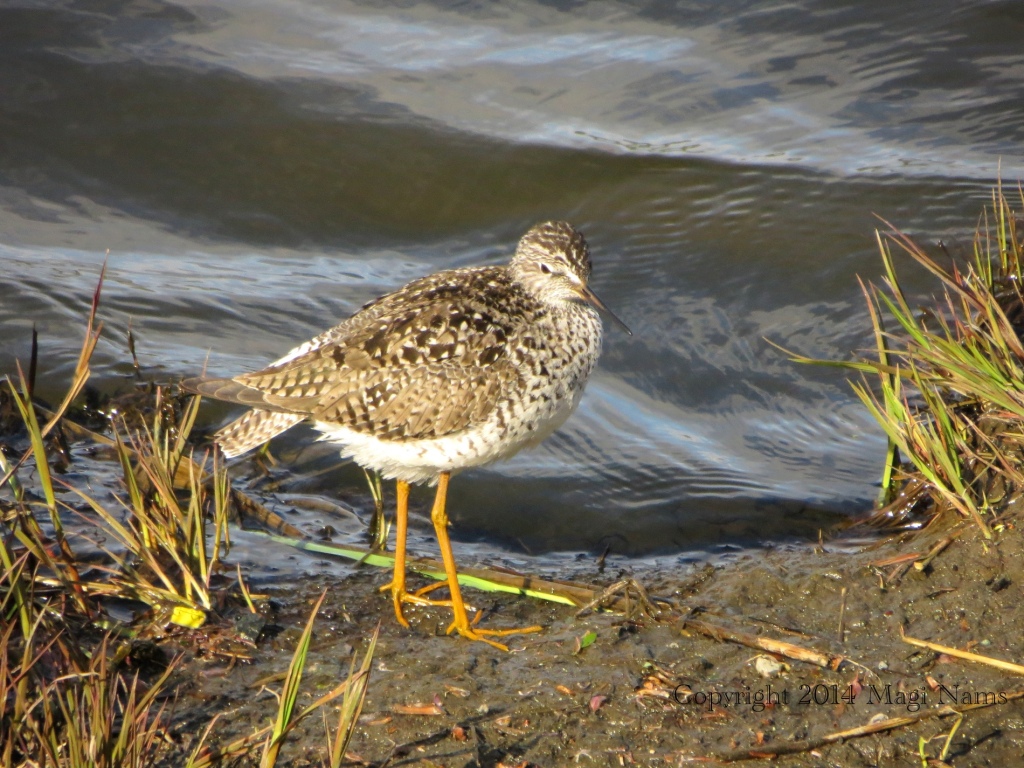 A pair of Greater Yellowlegs hurried along the stony bank of Chester Creek, plunging their long beaks into the fast-flowing salmon stream. (As a aside, fishing is Alaska’s third biggest industry, after petroleum and tourism. While in Anchorage, I ate grilled salmon, salmon chowder, and Caesar salad with smoked salmon – all delicious.) A Short-billed Dowitcher foraged unconcernedly in a marsh adjacent to Tony Knowles Coast Trail. 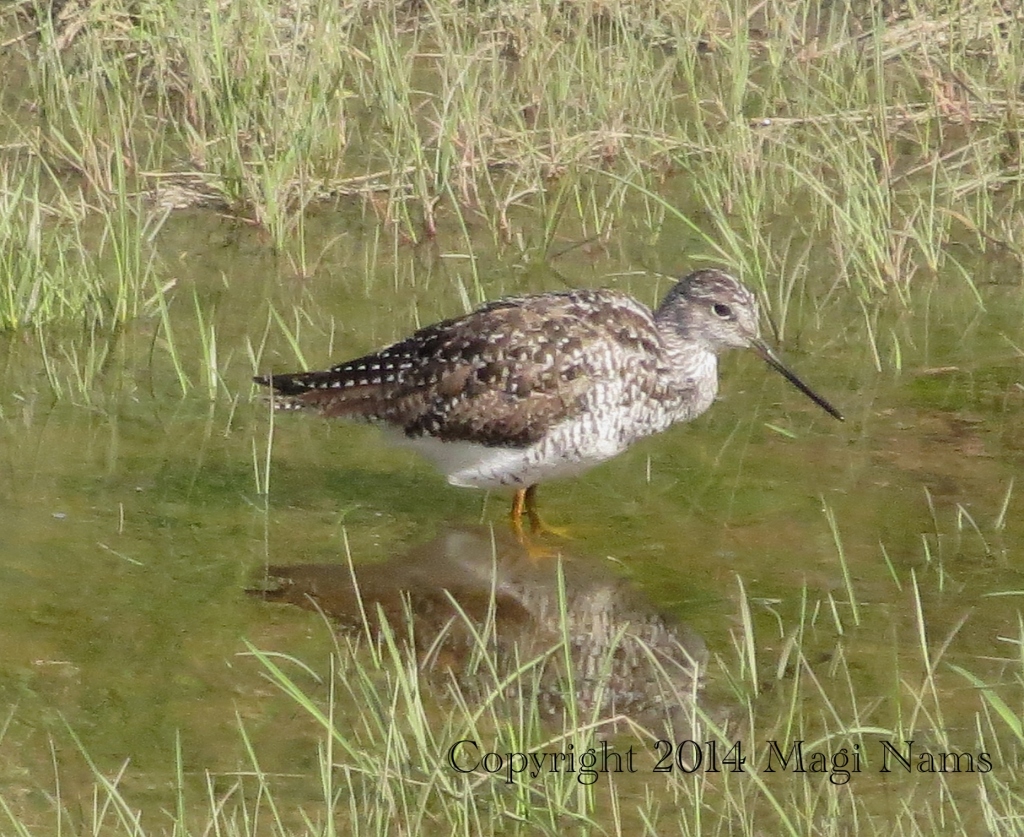 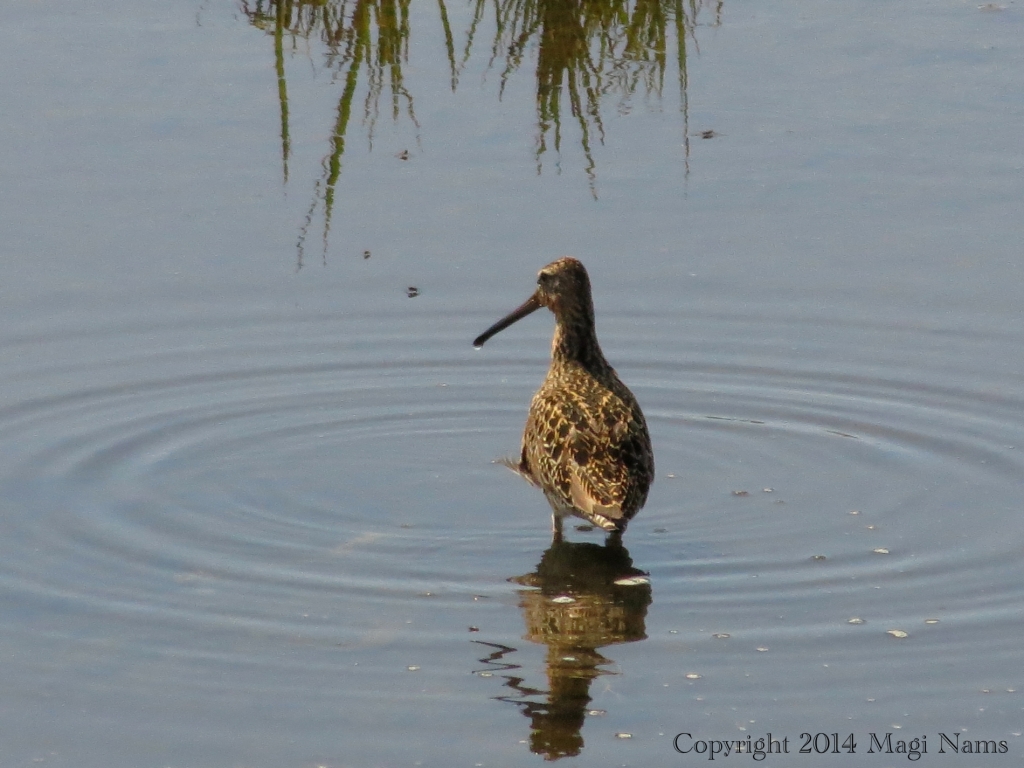 At the eastern end of Chester Creek Trail, I walked around Goose Lake (encountering my third moose) and spotted a  Pacific Loon, a lifer for me. I watched the handsome grey-headed loon dive and surface and float for about ten minutes, but never heard its call. The small lake also had nesting red-necked grebes, and I spotted an orange-crowned warbler trilling in lakeside poplars. 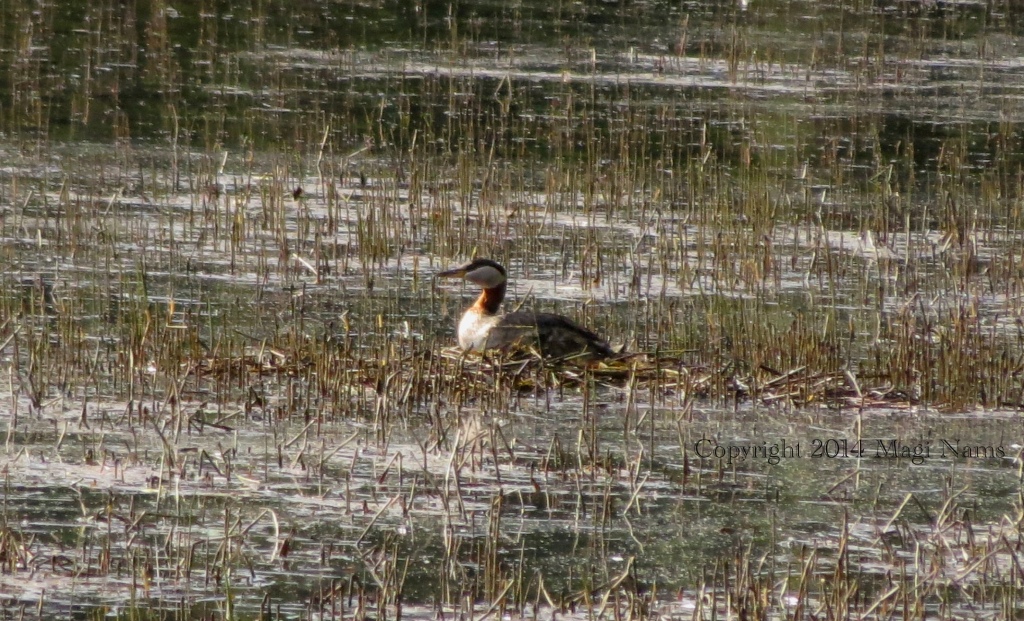 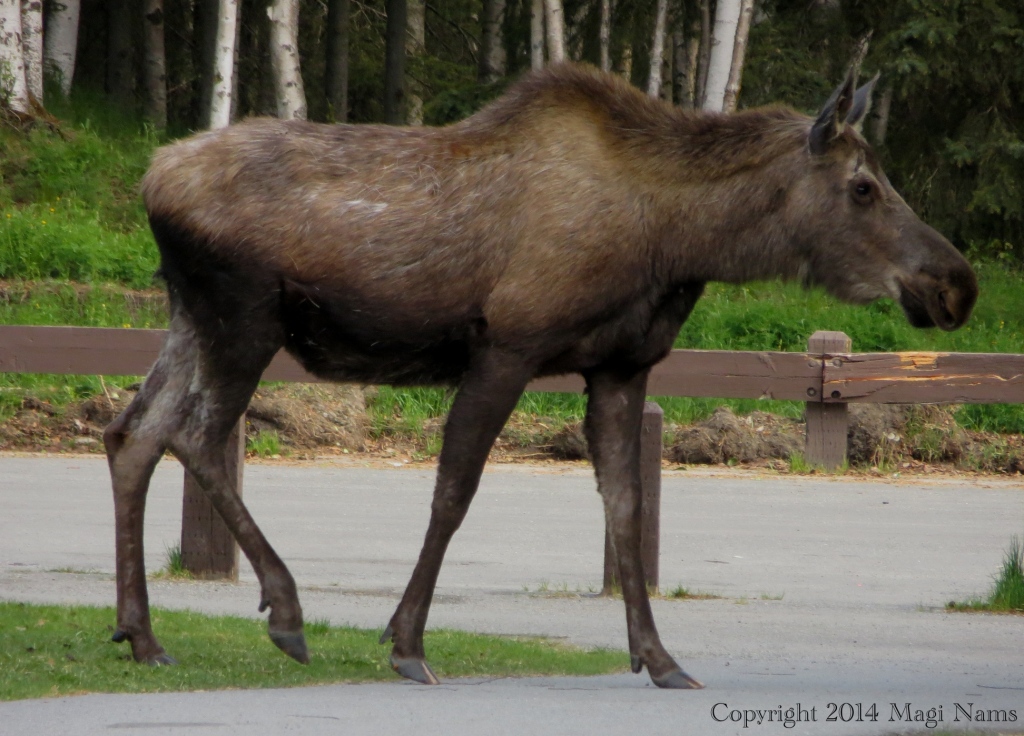 The wildlife in and around Anchorage is obvioulsy a big part of the city’s persona, as evidenced by sculptures I saw outside Anchorage Museum (which houses an amazing collection of cultural artefacts of Alaska’s native peoples. I’d never seen a gut parka – translucent, lightweight, waterproof – before.). 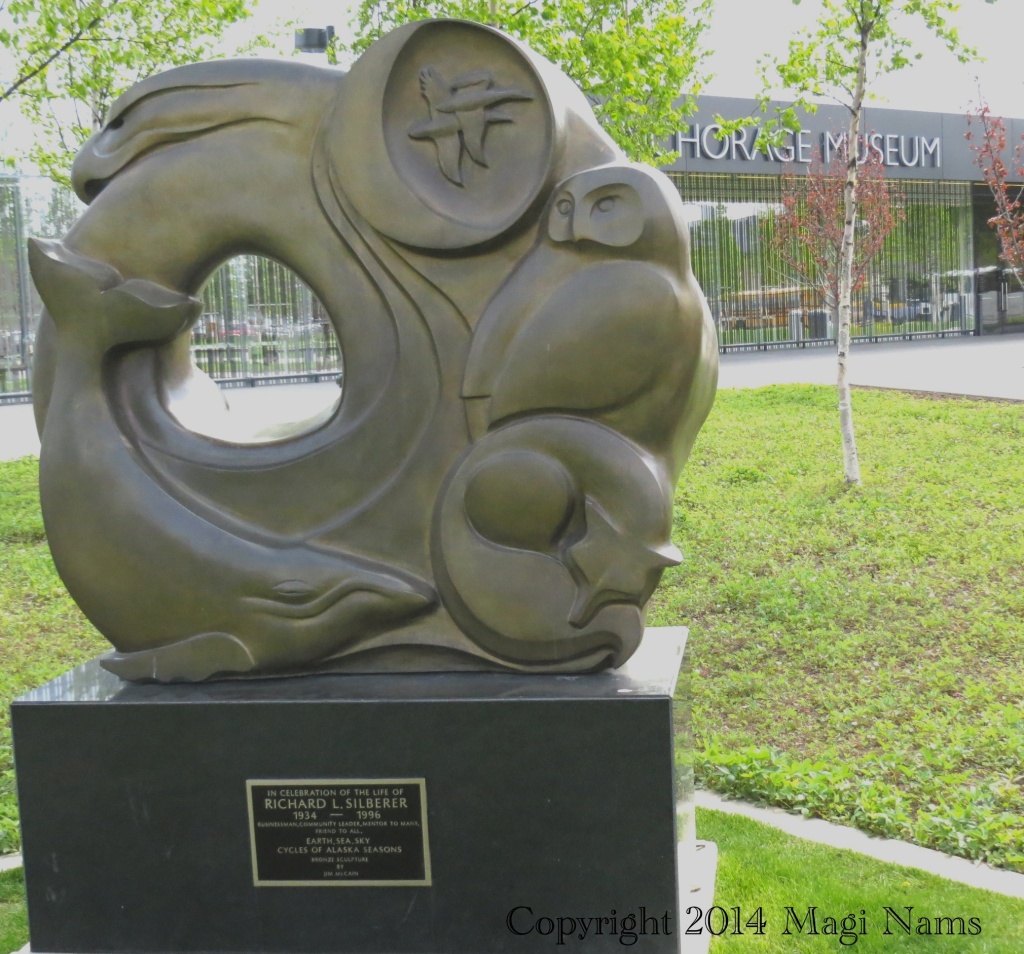 Although spring arrived early in Anchorage, I suspect many migratory birds hadn’t yet made their appearance when I was there. I didn’t see or hear any flycatchers, only two warblers, and no thrushes except robins. My next post will feature a five-houir cruise on Prince William Sound, with its glaciated landscapes and sea otters.