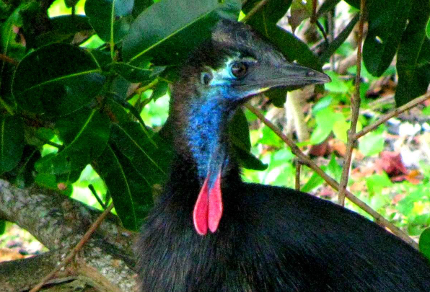 Stocky and shaggy, the southern cassowary sports a casque atop its head and disperses fruit and berry seeds in Australian wet tropics rainforests.

For this week’s featured bird, we’ll travel to the lush rainforests of tropical Australia. The southern cassowary is Australia’s second largest native bird, after the emu. It belongs to the group of flightless birds known as ratites, which include the world’s largest living birds.2,3 Emus, South American rheas and African ostriches are also ratites. 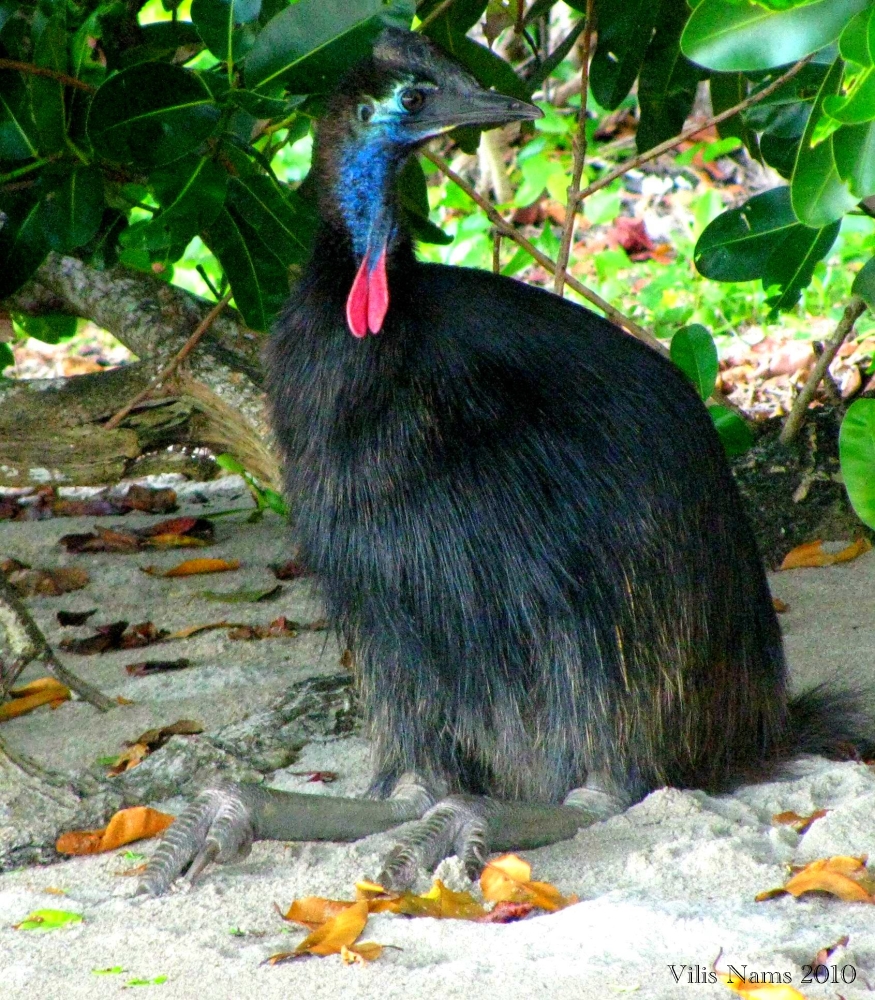 The southern cassowary, Casuarius casuarius, stands up to 1.8 metres tall and bears a horn-covered, bony helmet or casque atop its head. The helmets of adult birds are about 17 centimetres high.2 Those of immature birds, like the cassowary shown in the photo above, are smaller. The photo below shows an adult with a full-size helmet, and an immature cassowary in the background. 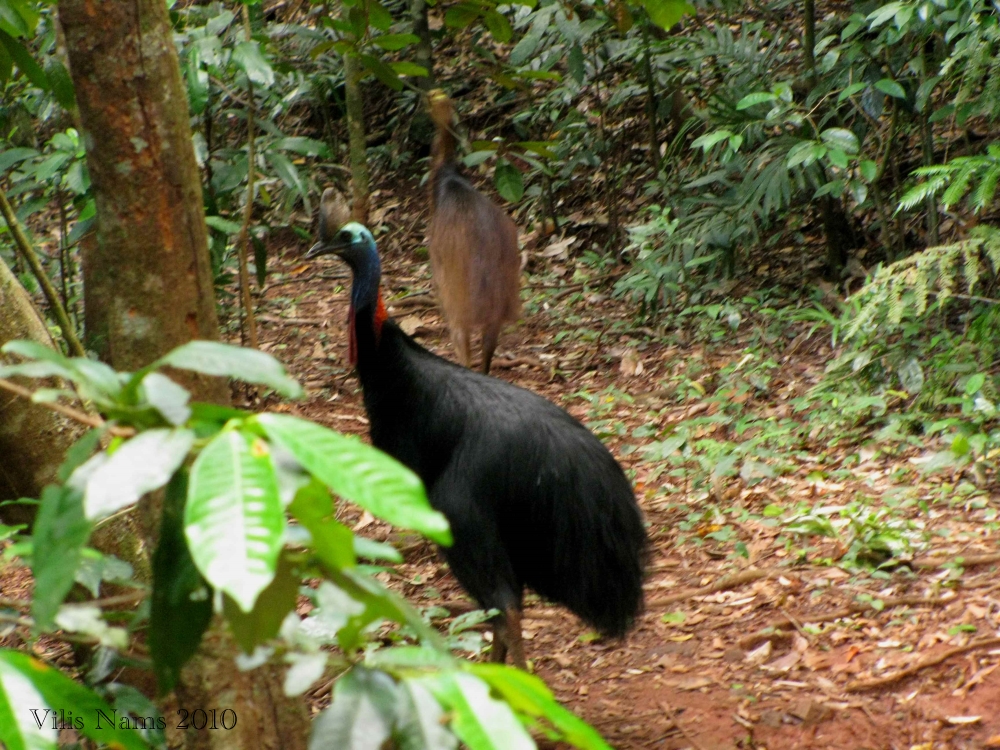 Within Australia, the southern cassowary occurs only in wet tropical rainforests in North Queensland3 and is a protected species. It also lives in Papua New Guinea, where two additional species of cassowaries occur.2 In North Queensland, Licuala fan-leaved palm forests are prime habitat, with the palms’ orange fruits being one of the southern cassowary’s  preferred foods. 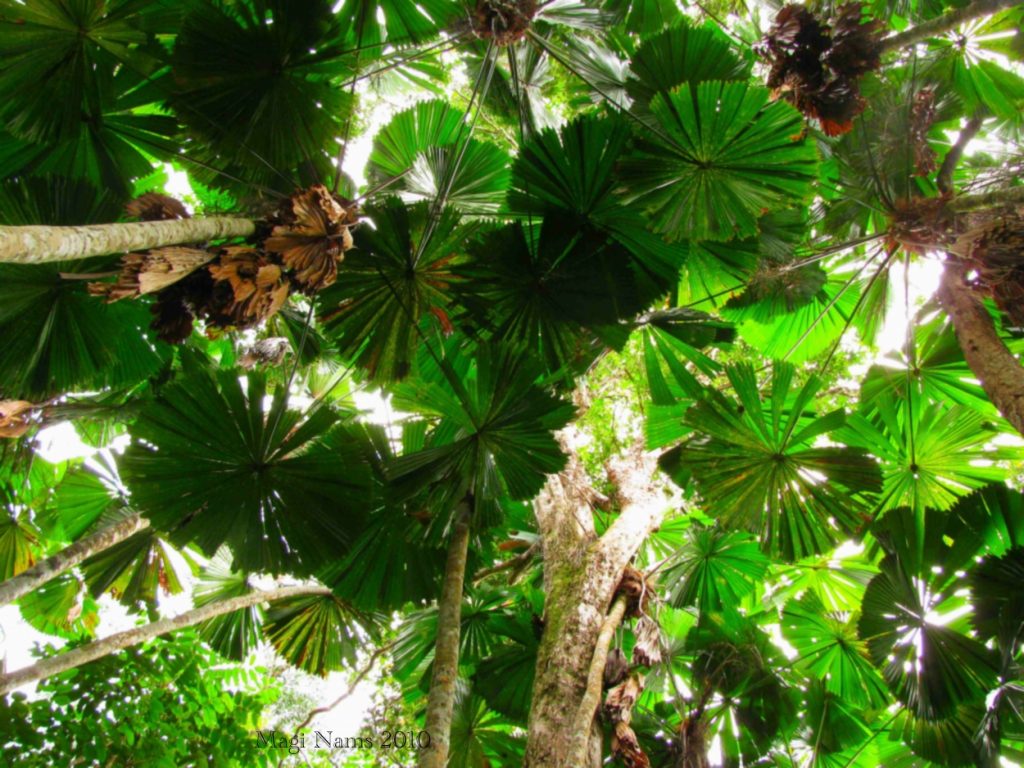 A fruit eater, the southern cassowary consumes fruits and berries of more than 230 species of rainforest plants.1 The bird’s gentle digestive system allows the seeds to pass through undamaged. Thus, the cassowary is a highly effective dispersal agent for rainforest plants, some of which rely on it exclusively.1 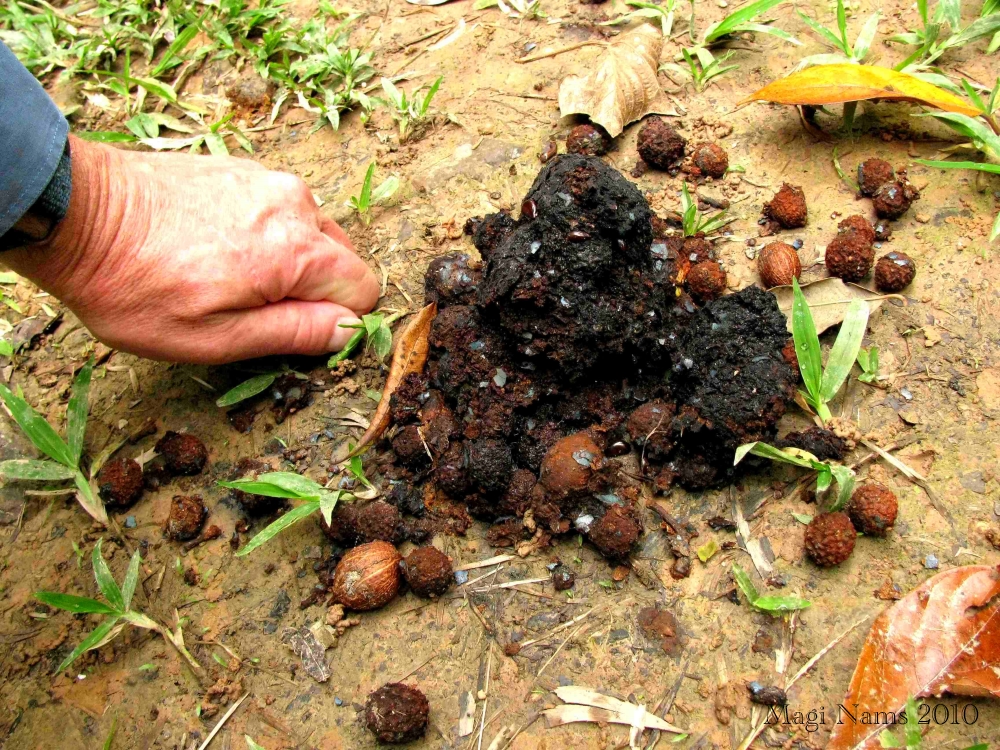 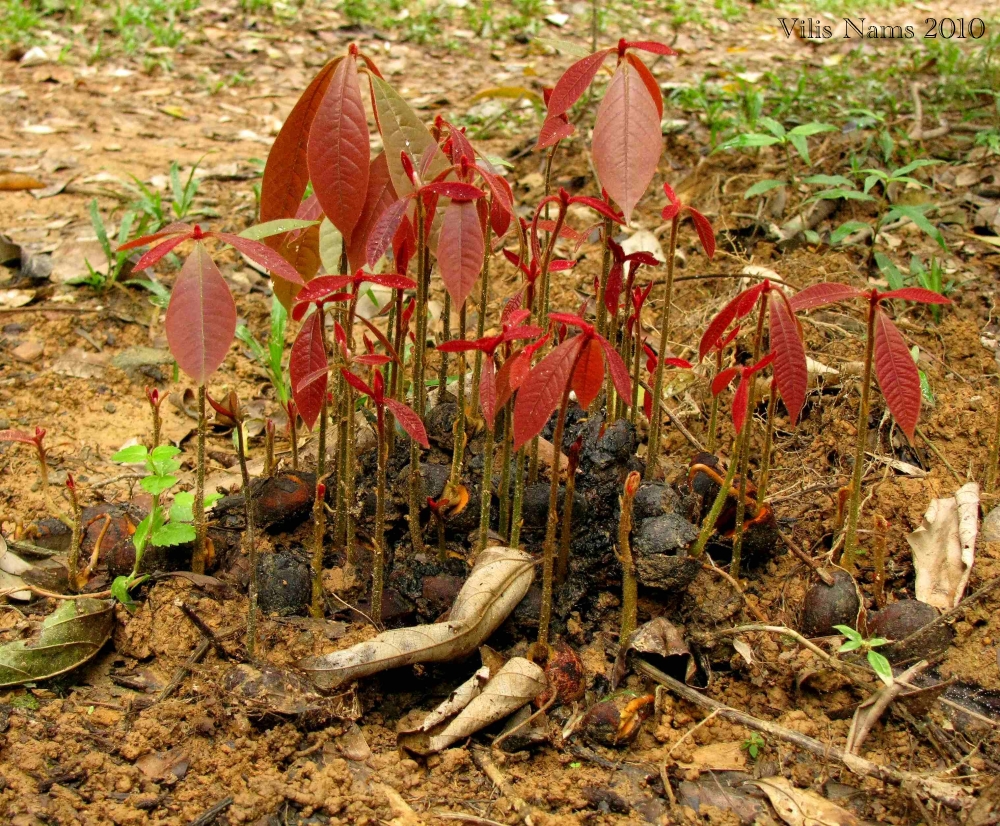 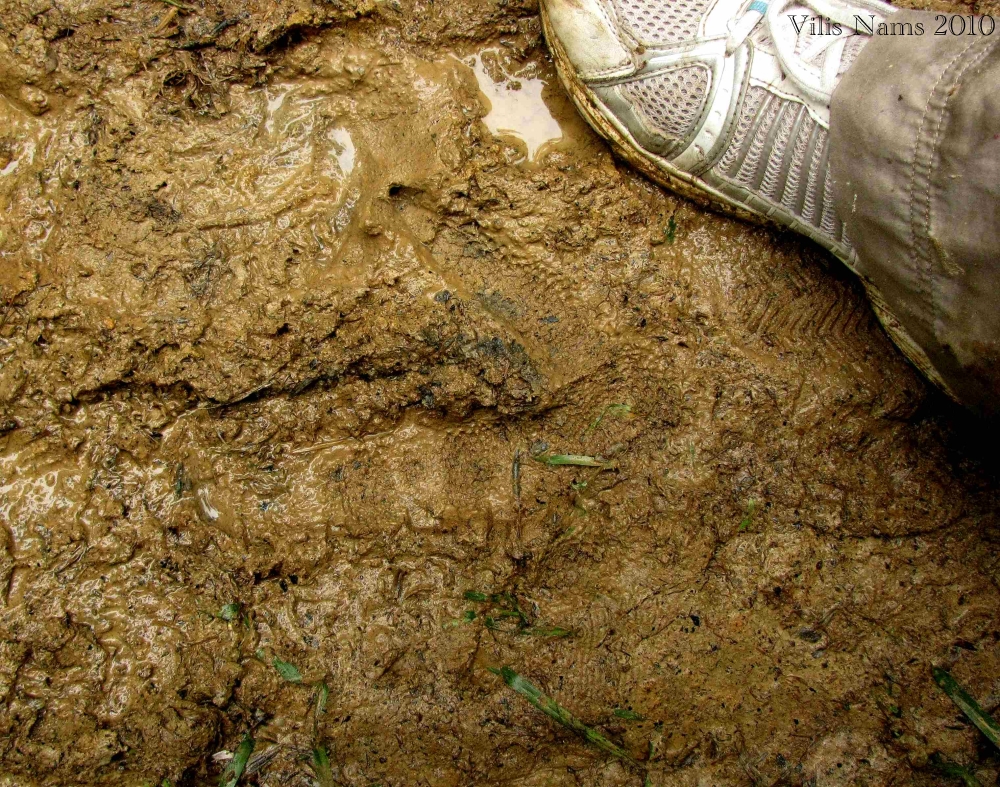 During our year in Australia in 2010, Vilis and I travelled to the southern cassowary hotspot centred on Mission Beach, east of Tully. In Licuala State Forest Park, we  encountered piles of cassowary dung adorning the hiking path, some old, some new, some with sprouted seeds.

Despite all the cassowary sign, we hiked for three hours before Vilis glanced back along the trail and spotted a southern cassowary. An adult with a prominent casque sauntered peacefully along the track some distance behind us then stepped into the rainforest. We retraced our steps, hoping to spot the cassowary in order to photograph it. We found its tracks in the greasy mud of the trail, but the bird itself had disappeared.

Determined to get a photo of this iconic Australian bird, we drove to nearby Tam O’Shanter National Park and again dodged cassowary dung on the trail, but saw no cassowaries.

In a last effort to find a cassowary to photograph, we drove north from the Mission Beach area to Etty Bay in Moresby Range National Park near Innisfail. We had stopped in at the Tully information centre, where the receptionist had told us that cassowaries abandon the rainforest at Etty Bay in late afternoon to walk the beach.

She was right. On a walk along the beach, I spotted a cassowary resting in the shade of a low tree (opening photo) only a few metres from beach-goers seated in deck chairs. Obviously, the bird was habituated to humans. Intrigued, Vilis and I watched as the cassowary left its resting place and placidly strolled the beach. Cloaked in its thick plumage of coarse feathers intended to shed water and offer portection from the rainforest’s barbs and spikes,2 the cassowary walked right past our towels and paused to stare at a young woman working at her laptop at a picnic table. The big bird moved on and poked its beak into debris tossed up by the tide. Then it strolled over the sand, pausing to gaze at swimmers frolicking in warm, green waves.

Two months later, we also saw southern cassowaries in Australia’s biodiversity-rich Daintree National Park (see second photo). We weren’t specifically looking for cassowaries, so coming across two of them while hiking amid towering rainforest trees was a thrill! 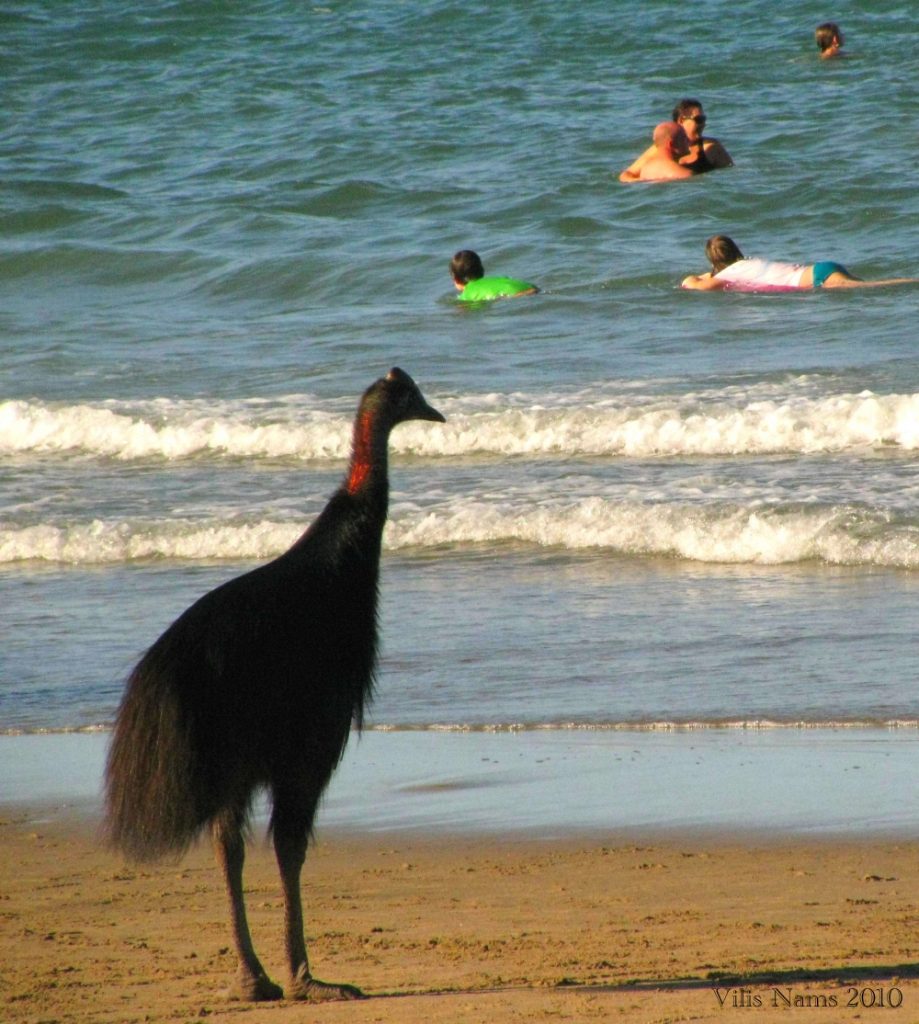 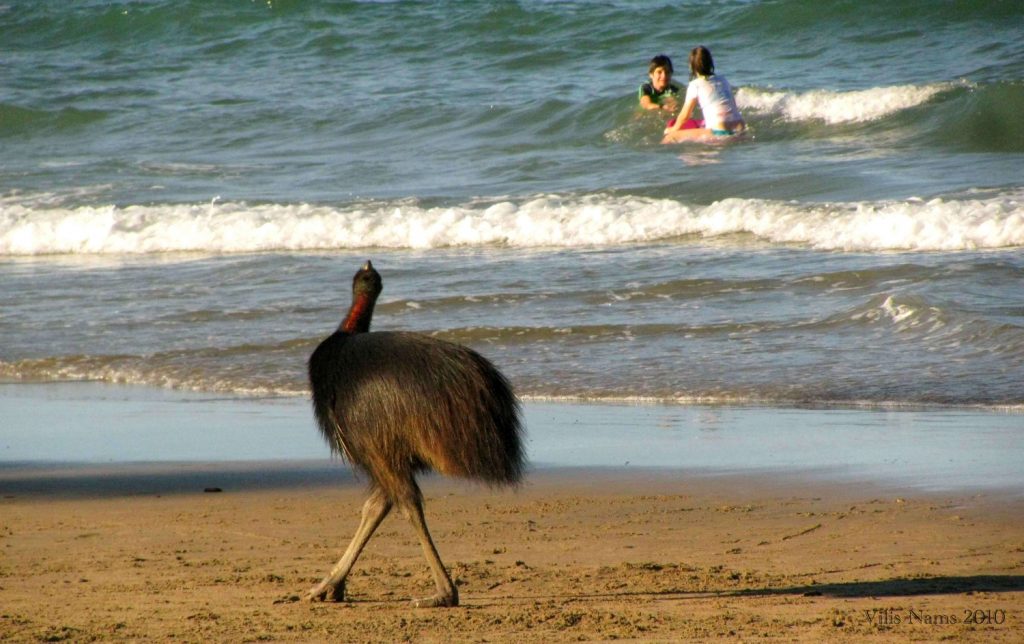