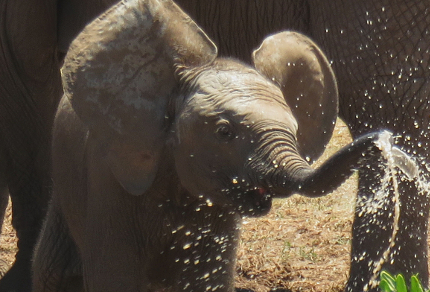 Travelling between Southern and Northern Hemispheres takes a bit of getting used to. Two weeks ago yesterday evening, Vilis and I returned to our home in Nova Scotia, Canada, after spending six months based in Grahamstown, Eastern Cape, South Africa.

On December 18, two days before our departure from Grahamstown, I ran up Gunfire Hill and through Makana Botanical Gardens one last time, an hour after dawn. I wore shorts and a tank top and enjoyed the caress of South African summer heat on my bare limbs.

This morning, snow sifted into my sneakers as I ran a Canadian country road near my home, an hour after dawn. I wore tights and wind pants, a long-sleeved top, fleece hoody, wind jacket, scarf, knitted hat and wool gloves inside leather mittens to ward off the -15° Celsius cold. Quite a switch! (Tap on photos to enlarge.) 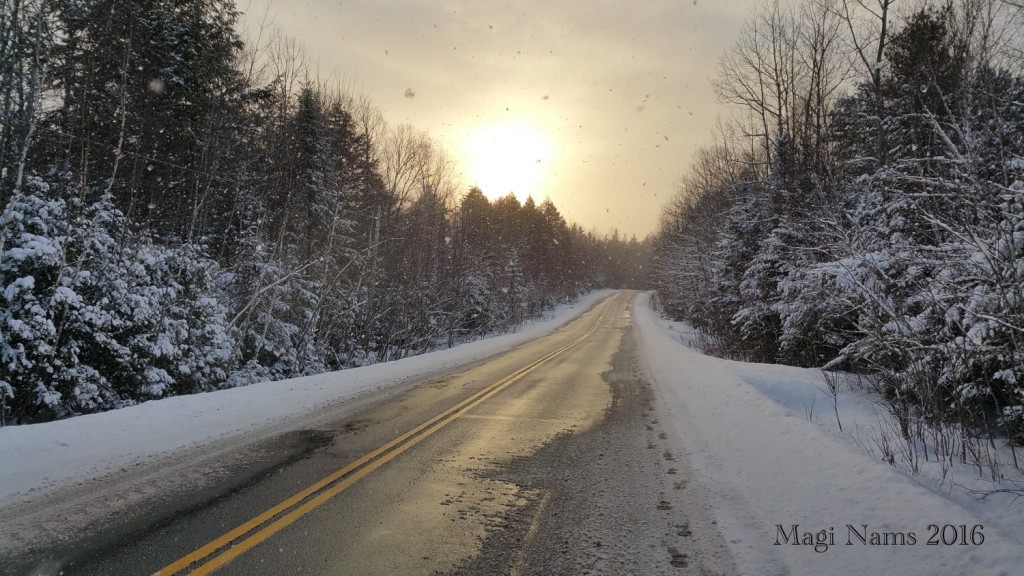 My Footprints on a snowy Canadian Road (© Magi Nams)

The day after my last Grahamstown run, Vilis and I drove gravel roads in Addo Elephant National Park, bidding farewell to the South African wildlife that had so captivated us during our first visit to the park in late June and on subsequent visits. Warthog piglets shuffled on their knees while grazing grasses then nursed from their mother. A baby elephant sucked up water with its trunk and then playfully waved its schnozz high in the air and sprayed out water in a glistening arc. A young ostrich walked down the road beside us, seemingly unconcerned by our presence.

The morning after we flew from South Africa to Canada, we watched white-tailed deer paw through snow to uncover apples fallen from a large tree in our backyard. A red squirrel dashed back and forth across our porch as it carried spruce cones from trees growing on one side of the house to its cache in a hollow apple tree on the other side of the house. Biogeography came alive before my eyes. 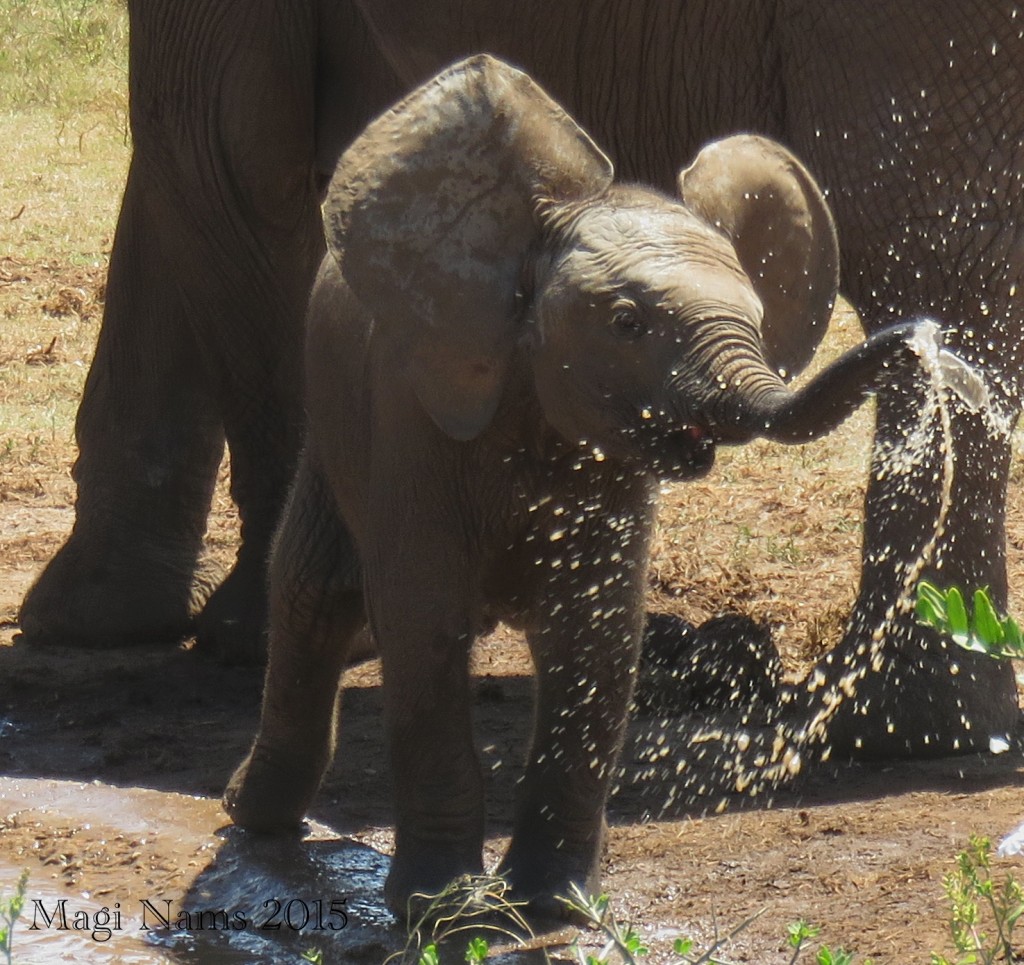 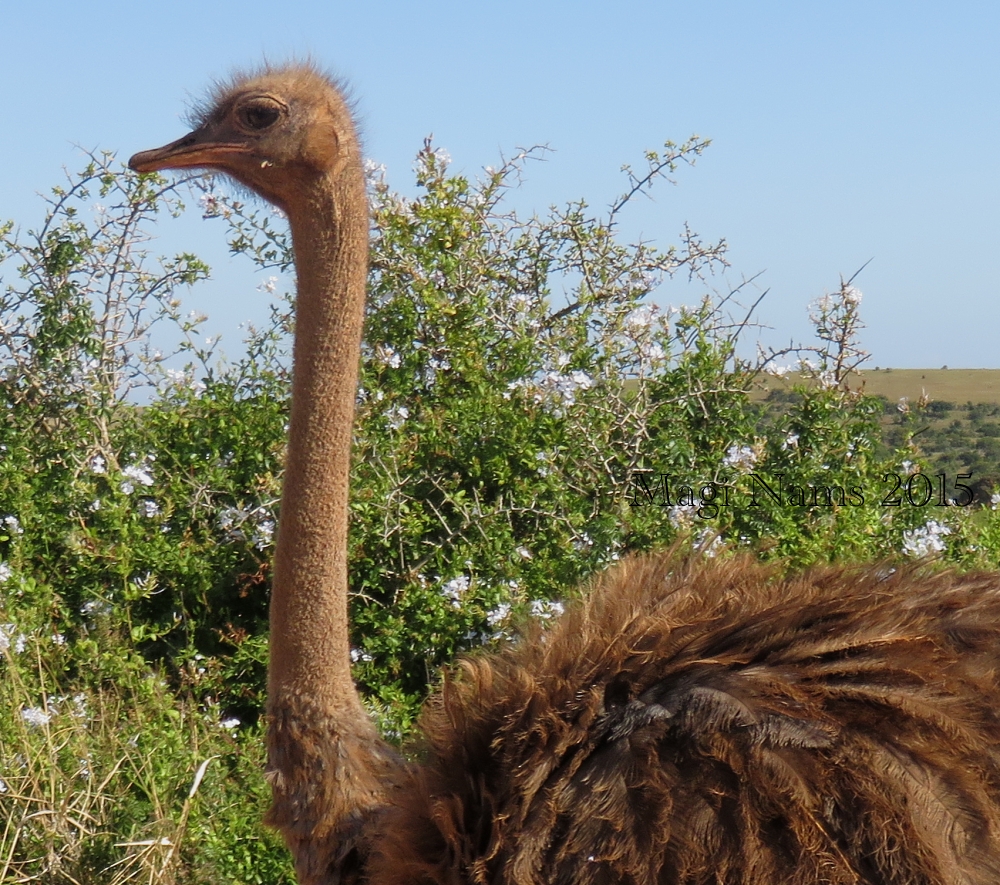 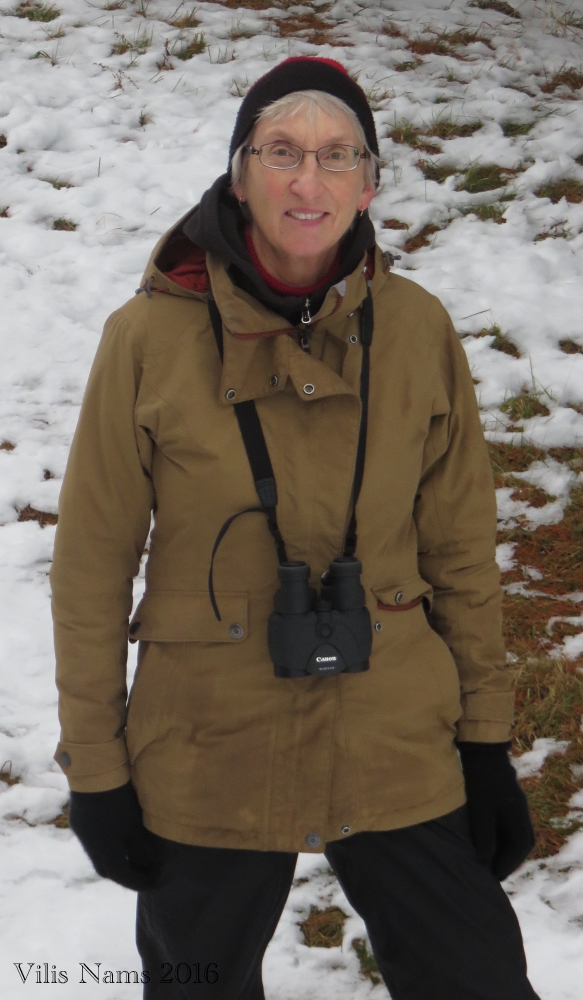 Here I am on Christmas Bird Count day. (© Vilis Nams)

Christmas and 2016 arrived, delightful with family and friends and a Tatamagouche community feast called Christmas at the Creamery. Yet, jetlag dogged me, my mind and body torn between time zones and disconcerted by the sudden decrease in daylight and change of environment due to the switch from South Africa to Canada.

Two days ago, on January 3, I participated in Tatamagouche’s Christmas Bird Count and walked more than fourteen kilometres while looking for birds in a white landscape so unlike the green lawns and hot pink bougainvilleas on campus at Grahamstown’s Rhodes University, where Vilis and I lived in a small apartment during our stay in South Africa.

This afternoon, I walked five kilometres through that same white landscape and held out my mittened hands as wads of snowflakes fell from the sky and swirled into a gentle dance on the lightest of breezes. I laughed as I tried to imagine such fluffy wads of snow falling in Grahamstown, on the coral trees and purple-flowering jacarandas and birds-of-paradise plants, on the hadeda ibises and gloriously iridescent sunbirds. The thought seemed so ridiculous, the snow so magical, and in that instant, I caught a glimpse of how a newcomer to my country, who had never before experienced snow, might react to it. And I understood that part of me is still across the Atlantic, far south at the tip of Africa in a land of rock and thorn. A land called South Africa.

Thanks to all of you who visited my website during 2015. May 2016 bring you blessings, challenges, and adventures. Happy New Year!