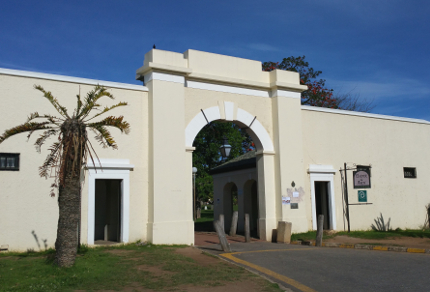 Newly arrived British settlers in Grahamstown brought Georgian architecture with them, a style characterized by strictly imbued symmetry and relatively simple facades. Today, settler architecture in Grahamstown can be seen in residential settler’s cottages and in former military buildings on the Rhodes University campus.

Recently, I had the pleasure of hearing two lectures about Grahamstown architecture, both presented by Hugo Nel, an economist at Rhodes University who has an obvious passion for architecture. The information below is derived from the first of these lectures; it dealt with settler architecture in Grahamstown in pre-Victorian times. Any errors in the information are mine – I had difficulty keeping up while writing notes!

In 1812, Grahamstown was founded as a British colonial outpost in the Eastern Cape frontier. Its military garrison was one of several stationed along the Fish River, considered the border between British territory and that of the Xhosa people. In 1820, English settlers arrived in Eastern Cape to bolster the British crown’s hold on South African soil. The predominant architectural style of the time in the United Kingdom was Georgian architecture (late 1700s to 1830s), which the newly arrived settlers brought with them. This architectural style was characterized by strictly imbued symmetry and relatively simple facades.

On Wednesday, I went hunting for the buildings described in the lecture and was delighted to find a number of settler’s cottages on Cross Street. Typically one or two stories high, a settler’s cottage was built with the door positioned in the centre of the wall facing the street and windows aligned symmetrically on both sides of it (and above it, when two stories high). (Tap on photos to enlarge.) 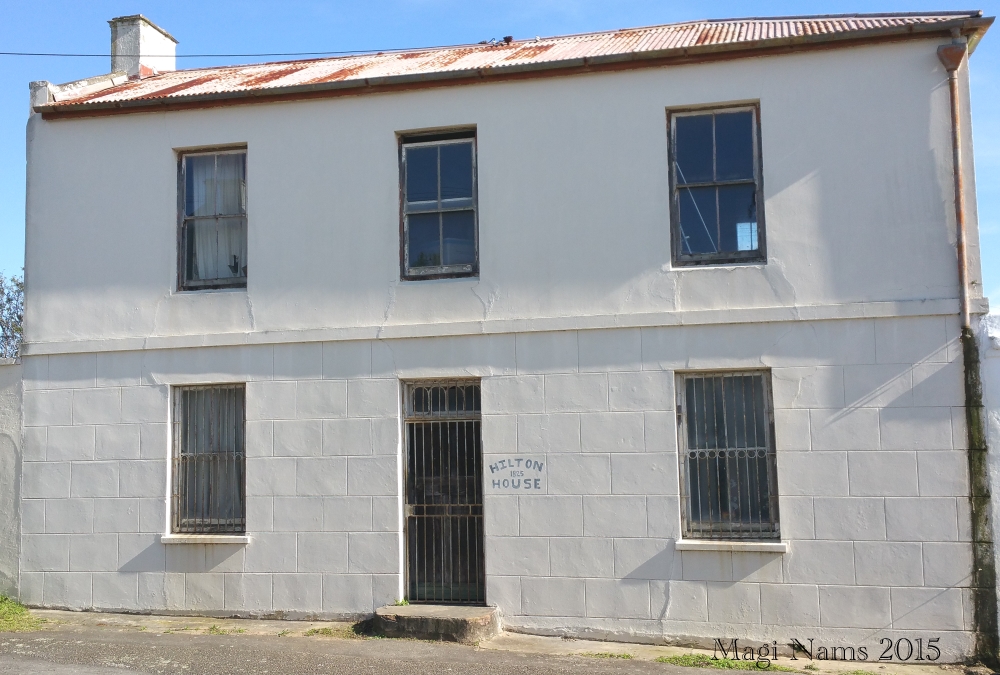 (Above and below) Settler’s Cottages, Grahamstown (© Magi Nams) 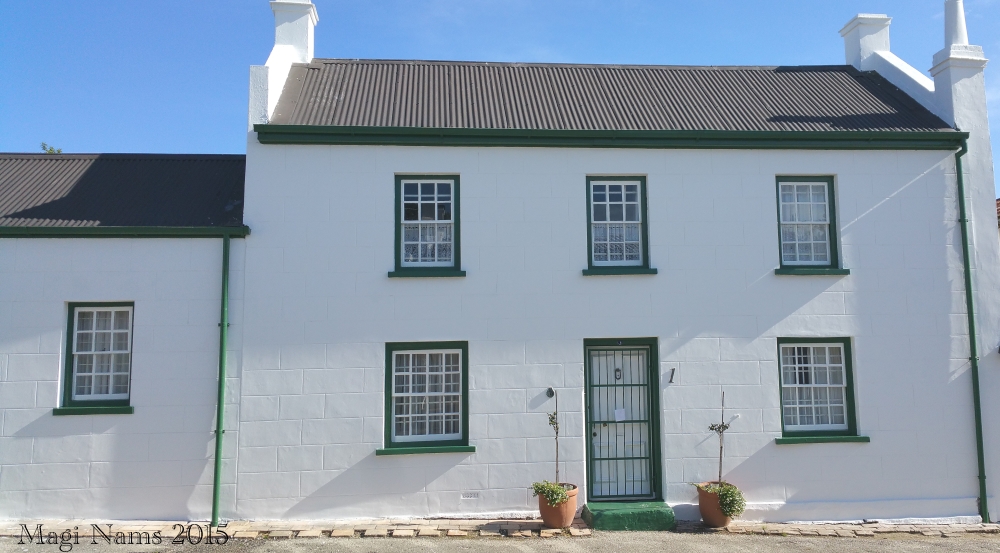 A number of buildings on the campus of what is now Rhodes University were constructed by the military’s Royal Engineers, mostly during the 1830s. The engineers used rock rubble, rough-cut sandstone blocks and plaster to construct soldiers’ barracks, officers’ quarters, a jail, a parade entrance and a small fortress on Gunfire Hill, high above the town.

What is now the Ichthyology and Fisheries Sciences building at Rhodes provides an example of an early Grahamstown military building constructed using the technique known as interrupted random rubble construction. Employing this technique, rough-cut stone blocks were used to frame corners, windows and doors, and the spaces between were filled with rocks of all shapes and sizes. 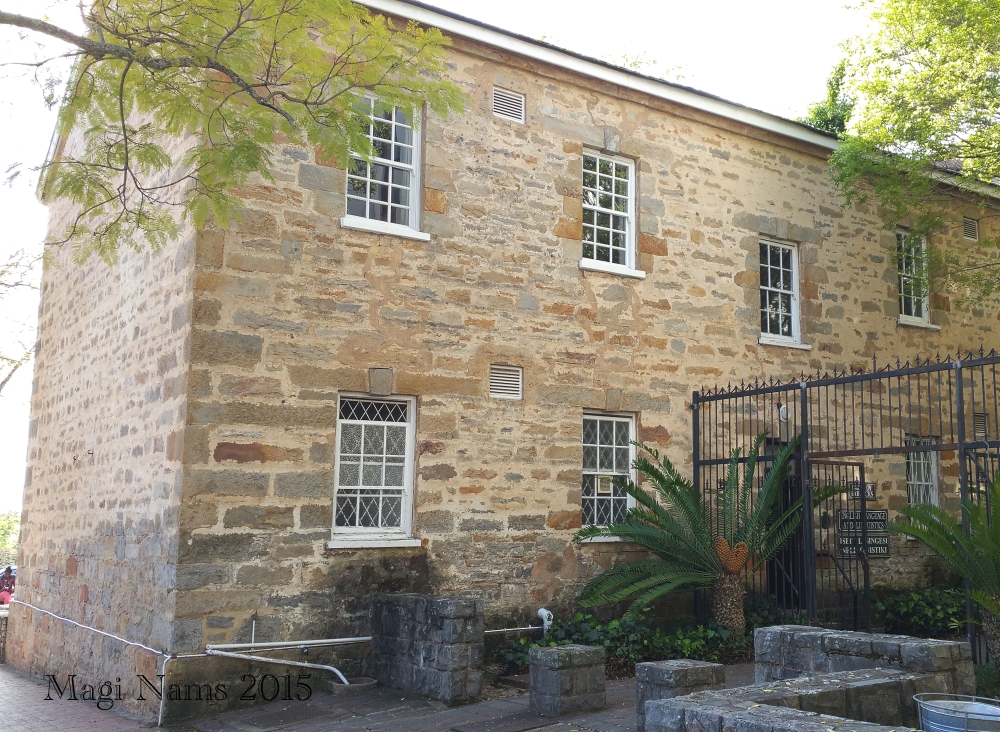 Drostdy Barracks (shown above), which once provided accommodation for soldiers and now houses the Department of English Language and Linguistics, illustrates an attempt to employ coursed random rubble construction, wherein rocks cut into roughly rectangular shapes were placed in distinct horizontal lines. This technique was used with greater formality and elegance across the street in Drostdy Lodge (shown below), which once provided officers’ with accommodation and now is home to the Department of Mathematics. The lintels above the windows of both structures consist of two long pieces of stone with a keystone in the centre. 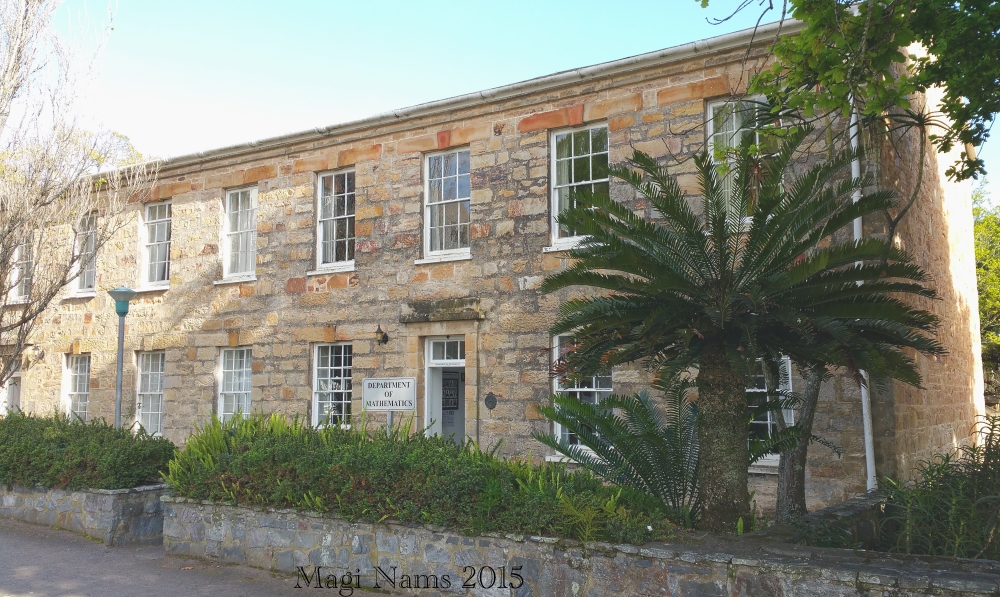 Drostdy Arch, the former entrance to the military parade grounds, has a simple plaster facade and illustrates the precise symmetry characteristic of settler architecture in Grahamstown.

Old Provost, a military prison with an intriguing, non-Georgian design, was built in the late 1830s. Its watchtower overlooked a central exercise area for prisoners who were housed in eight cells built in a quarter circle around the exercise area. The design enabled guards to constantly monitor prisoners’ behaviour – both good and bad – in the communal area. Today, Old Provost’s exercise area is an outdoor patio, and the watchtower is a cafe that sells fresh-baked spinach-and-feta croissants and huge, mouth-watering muffins. 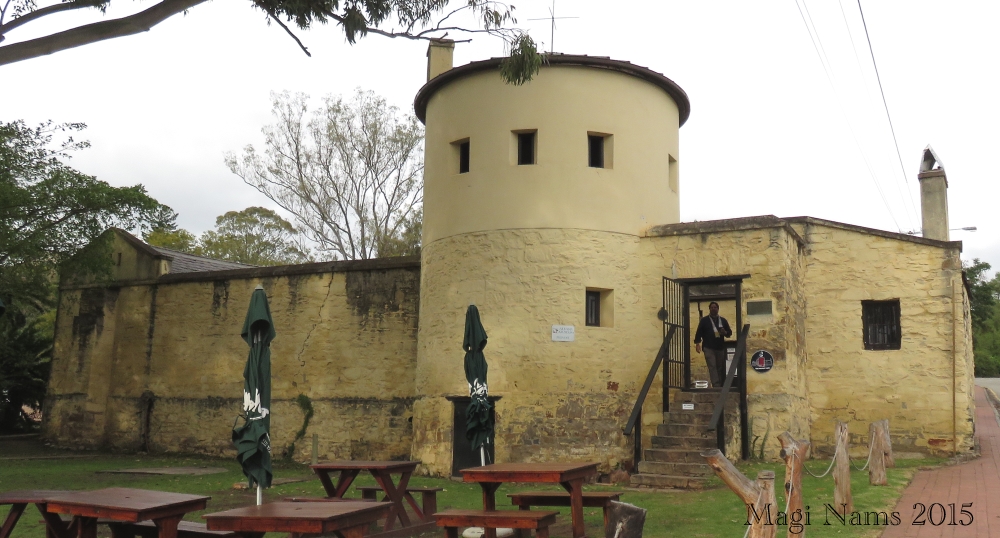 I’ll close this post with photos of three more intriguing examples of settler architecture in Grahamsown. The first is Fort Selwyn. Built atop Gunfire Hill in 1835-36 and named for Major Charles Selwyn, who designed it, the fort’s role was to protect the approaches to Grahamstown and the town’s water supply. 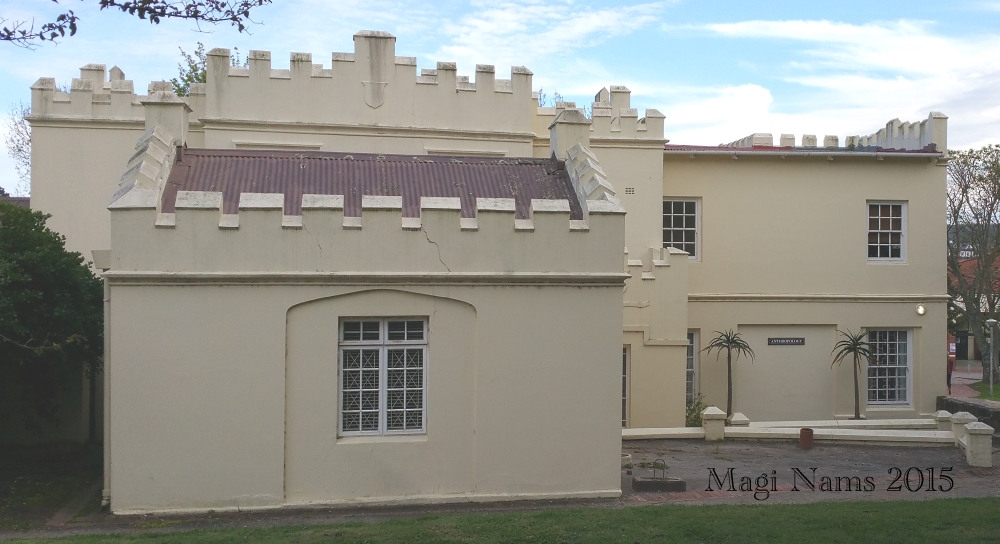 The second and third of my intriguing buildings are on Rhodes University campus. “Selwyn Castle,” with its lintel-framed windows, shallow gables, and battlements, was also designed by Major Selwyn and built in a Gothic Revival style. It served as his home and, later, as the Lieutenant Governor of Eastern Cape’s residence. It now houses the Department of Anthropology.

The last of my trio of intriguing frontier buildings looks like it was a real working man’s (or soldier’s) building constructed with whatever was at hand. I have no idea what the building’s original purpose was, but it’s now the Soccer Clubhouse. I love walking past it because its hodge-podge exterior exudes historical character. I confess that I’ve become a bit hooked on Grahamstown architecture as a window into this South African city’s past. I hope to feature more snippets on the topic in future posts. 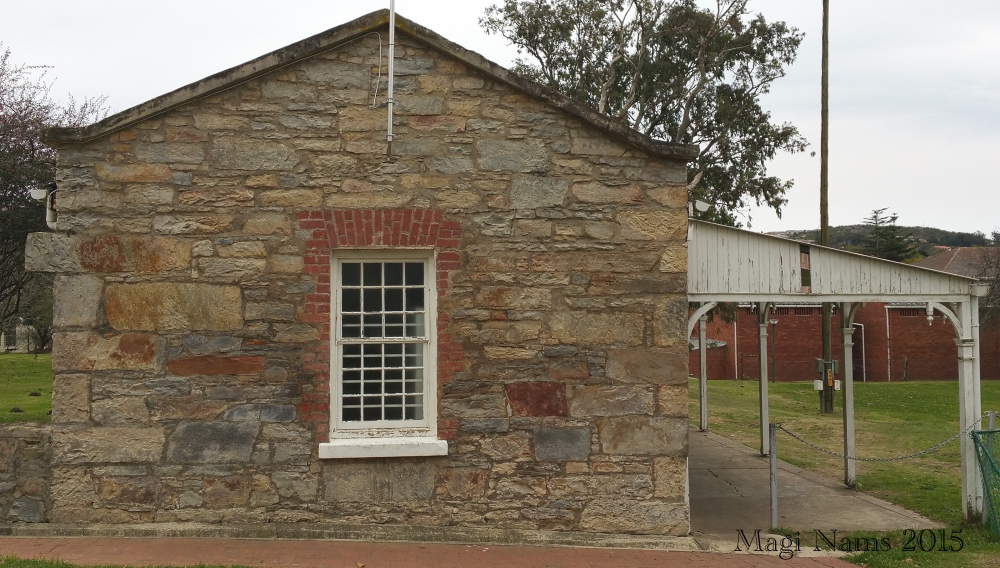