Return to the Great White North 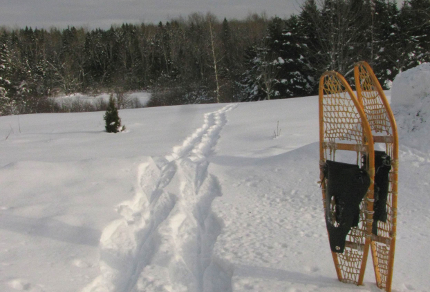 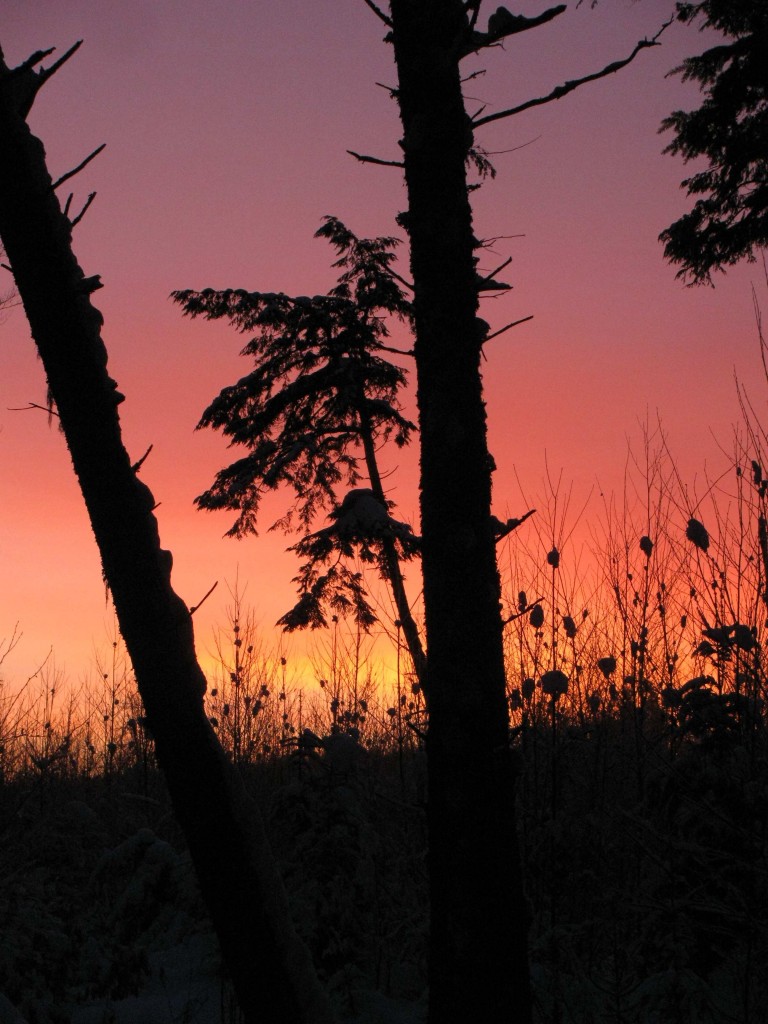 In deep, still cold before sunrise, I walked our .75-kilometre access road, the temperature -20

°C, the air clean and searing, the snow squeaking beneath my boots as only cold snow does. No sound broke the dawn silence. The landscape was washed with blue light beneath a clear, starlit sky that last night hosted a full moon, the brilliant orb casting tree shadows onto the white blanket of my Nova Scotian yard. In a clearing near the road’s end, clods of snow caught on twigs resembled lush, haphazard blossoms silhouetted against a rose, gold, and lilac sky foreshadowing sunrise.

Five weeks ago, my sight of sunrise was of palm trees in Townsville, Australia. Then, I walked, ran, and cycled in shorts and tank top, through 30°C temperatures and thick, clinging humidity. On our return to Canada, my husband Vilis and I laughed at the bulky winter clothes we borrowed from his father in Toronto, and were momentarily disconcerted by the sight of a black-phase grey squirrel scampering about in a tree in Knobhill Park, the only diurnally-active mammals we were accustomed to seeing in Oz being kangaroos and wallabies. I wore the gloves and toque (beanie in Oz) I bought to stave off the cold nights in Tasmania’s mountains, plus my father-in-law’s scarf and knee-length, insulated coat. Brisk wind and below-freezing temperatures nipped my fingertips, seared my cheeks, and infiltrated my sneakers with a biting touch. I longed for my insulated pants and winter boots at home in Nova Scotia and realized that the Canadian winter weather would require some acclimatization after a year in the tropics.

Yet, we drank in huge gulps of cold, clean air that filled our lungs with a remembered freshness we had missed so much in Townsville’s tropical  climate. With newly appreciative eyes, I absorbed the sight of black-lace silhouettes of leaf-bare maples and elms that spread fans of ever-diminishing branches and twigs against the sky, most spectacularly in the striking clarity of evening on Boxing Day, when the trees’ silhouettes stood vivid against a post-sunset, dusk-blue sky lit by the evening star. The trees’ graceful, black lace presented a entirely different kind of beauty to the richness of Townsville’s palms, eucalypts, and spreading rain trees. Elegant skyscrapers among those silhouetted trees had risen black and window-white against that rich, oncoming night, their rooftops softly lit by turquoise lights, their straight, towering walls accenting the pale, sunset-infused light at the horizon, which merged incrementally into blue that darkened and deepened into the crown of night.

For four days, we enjoyed a relatively mild reaquaintance with Canadian winter (southern Ontario style), making brief forays to the park and strolling snowier streets in Orillia. We shared a trio of turkey dinners with Vilis’s extended family and generally ate far too much, enjoying our Christmas Day supper in a small house warm and joyful with knittings, strong wood furniture, a tumble of Christmas gifts, and the blessing of a baby boy only four months old. Our gift of an Australian merino lambskin to baby Everett elicited enormous smiles of delight from him as his tiny fingers clutched the soft wool, while that of a leather pouch made from the scrotum of a kangaroo and unwrapped by Vilis’s sister Velta brought howls of laughter from her and other adult guests.

Weather news during those four days of hiatus in Toronto told of catastrophic rainfalls and flooding in Queensland, and of a powerful nor’ easter moving up the east coast of the United States and into Canada’s Atlantic Provinces, including our home province of Nova Scotia. I thought of the flood-prone Bruce Highway north of Townsville, of southern cassowaries, which had suffered devastating population losses during Tropical Cyclone Larry in 2006, and of Queensland sugarcane farmers who still had crops in the field due to the early Wet. Television footage from Queensland showed a car swept off a road by floodwaters, its driver swimming to safety. The next clip showed blanket-covered passengers stranded in New York airports. In the serenity of Toronto, we were caught between two homes battered by the elements.

Finally, with an hour remaining before midnight, we returned to our northern Nova Scotia home on December 28, our son Dainis having collected us from the Halifax airport and driving us slowly through the lingering storm in his jacked-up, 4WD Ford Ranger. North of Truro, we had the road to ourselves, (“Nobody else is crazy enough to be out tonight,” Dainis quipped). The long, cleared access road along which I walked this morning was then an expanse of uninterrupted white – so beautiful and serene – and no vehicle with regular clearance would have been able to drive it. Sometimes it’s extremely helpful to have a son with a tough, ‘young man’s truck.’

Then came days of hectic unpacking and organizing, of belatedly exchanging Christmas gifts with our sons, of visiting friends not seen for a year, of fighting our way out of the tenacious mire of jetlag, and of writing my final posts from Australia and those from New Zealand. So now, Vilis and I are home, in the heart of the Canadian winter. We bundle up to avoid frostbite, and Vilis clears snow from our access road with a snowblower attached to a tractor. Our Toyota Echo has tires studded with small metal knobs that protrude beyond the rubber and provide traction on ice and snow. Vilis splits firewood to feed our wood stove. I snowshoe to our mailbox.

Here, no rainbow lorikeets fly overhead in saucy squadrons; rather the silence is relieved by the chirping twitters of black-capped chickadees and the tapping of hairy woodpeckers pecking at tree trunks. I set out a feeder baited with black oil sunflower seeds and have been rewarded with sightings of not only chickadees, but also exquisitely-coloured blue jays and evening grosbeaks, the former medium-sized and vivid blue with white and black details; the latter olive brown with patches of brilliant yellow. American crows scrounge up sunflower seeds from the snow ziggurat my son Janis built, and ravens rend the air with harsh calls embodying wilderness. Exquisitely elegant white-tailed deer bound through deep snow and rest beneath snow-laden spruce trees. Red squirrels, voles, and snowshoe hares leave footprints on the snow, telling of their actions even when they are no longer present. Below is a collection of photos to give your a taste of winter in Nova Scotia. Enjoy. 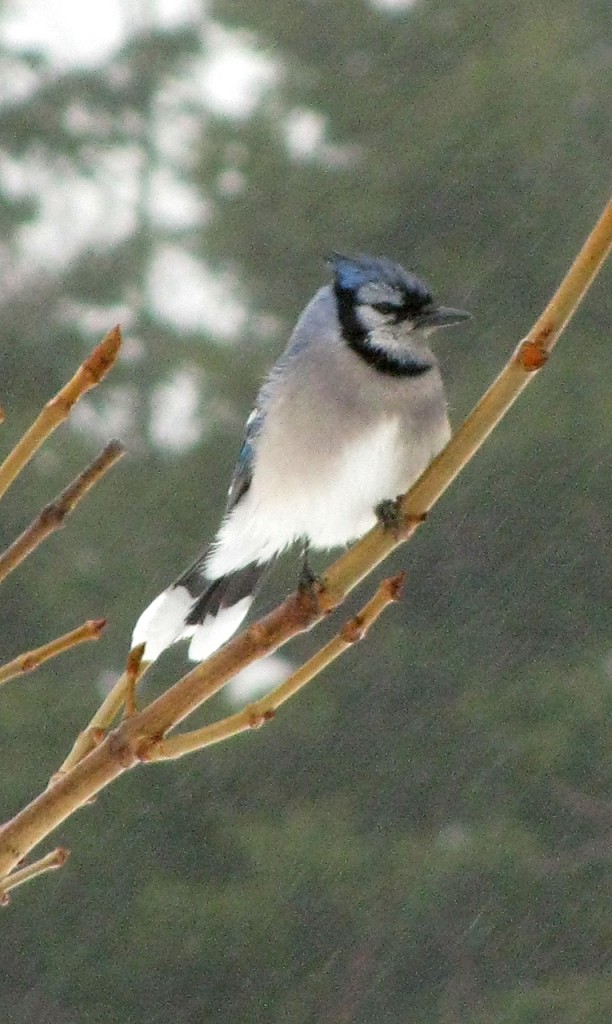 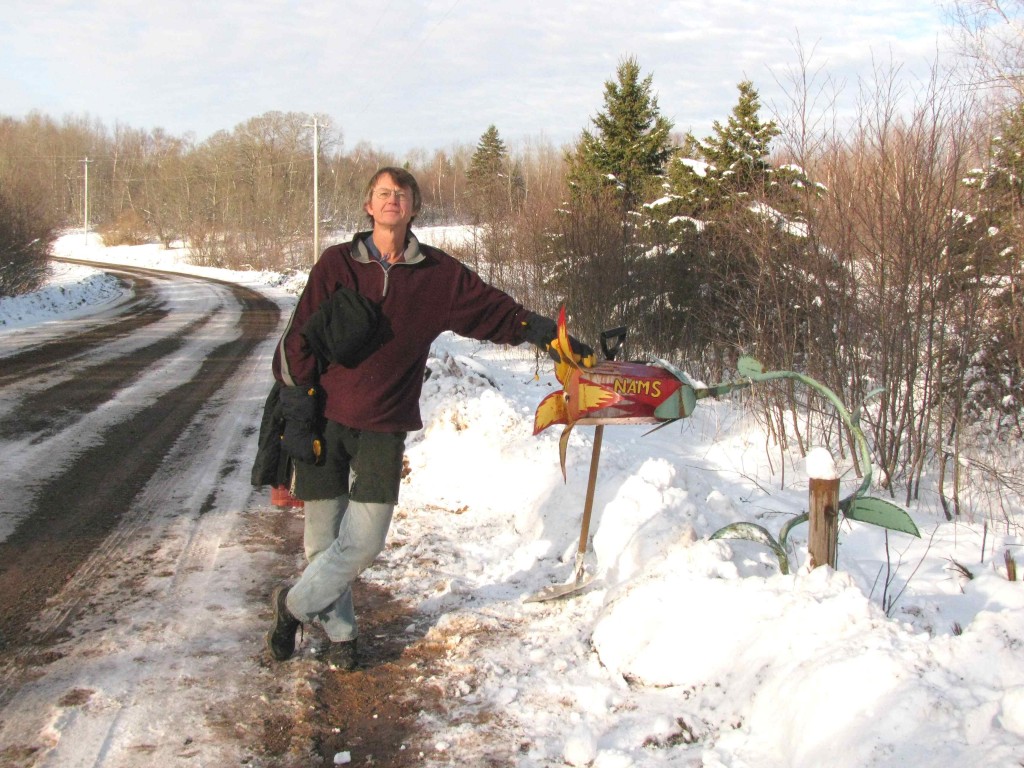 Vilis After Digging Out the Nams Mailbox (© Magi Nams) 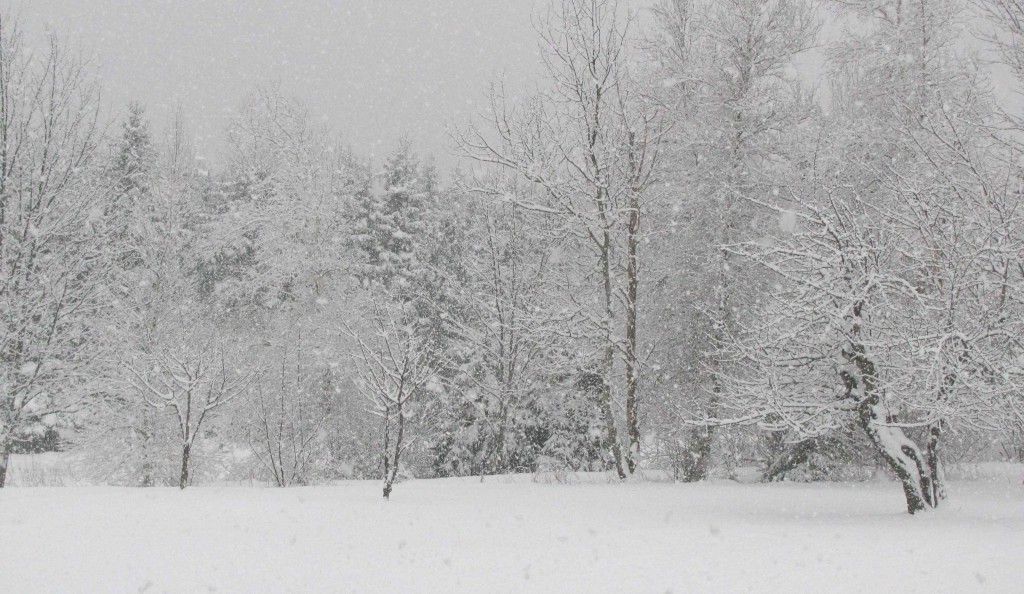 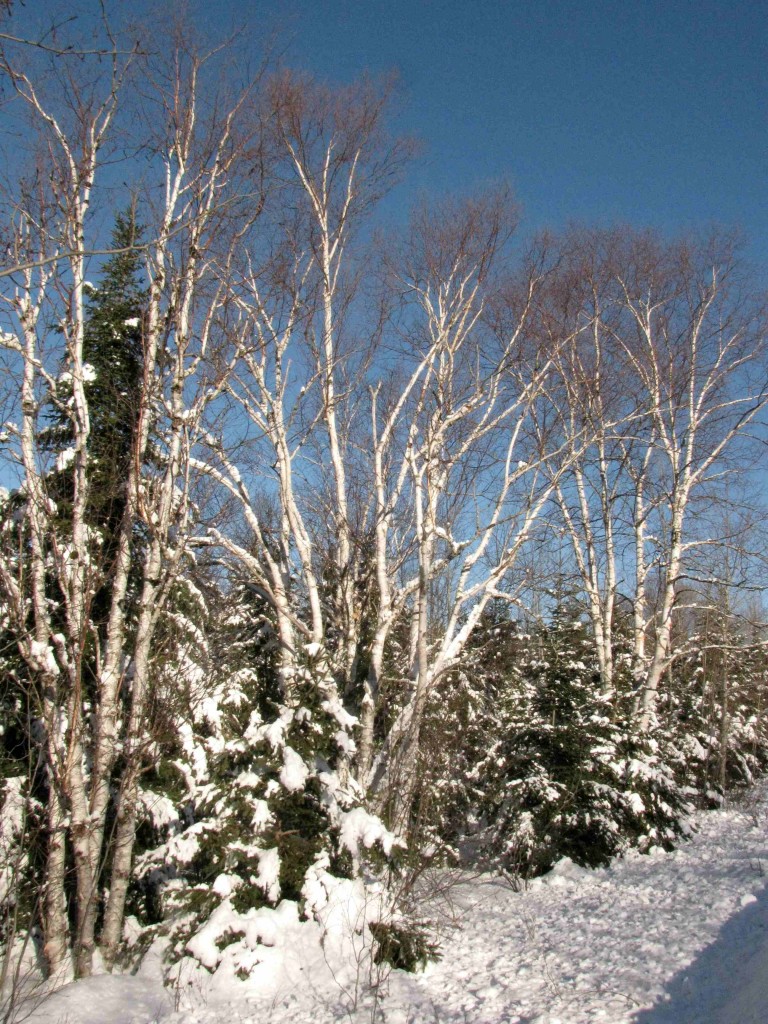 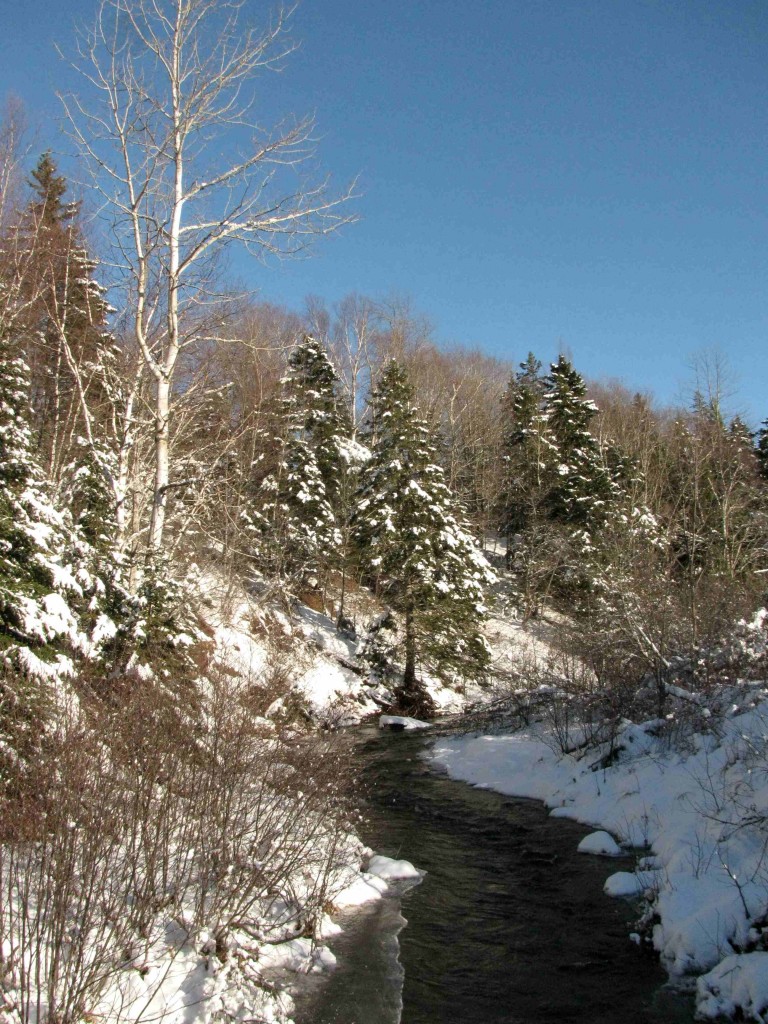 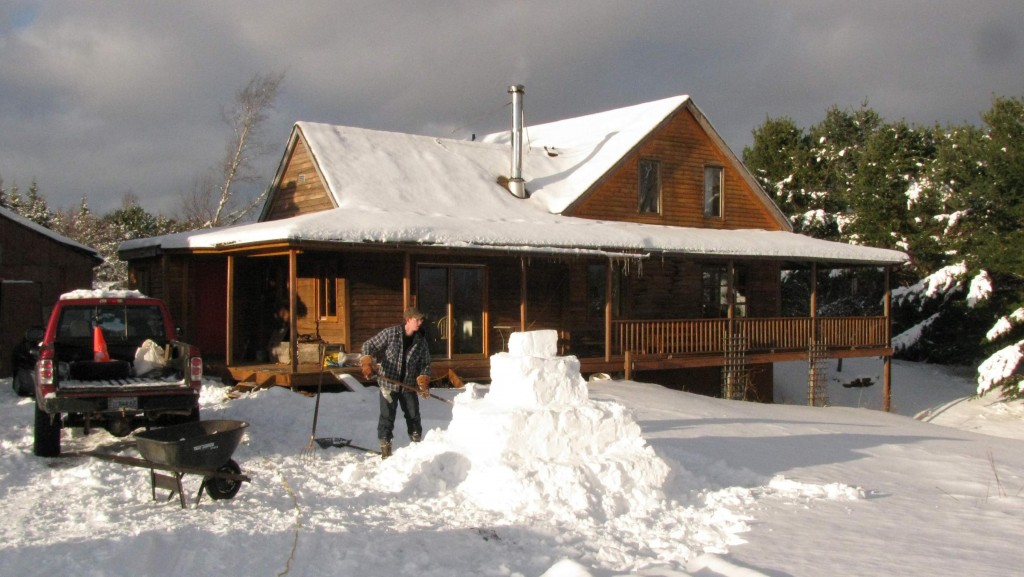 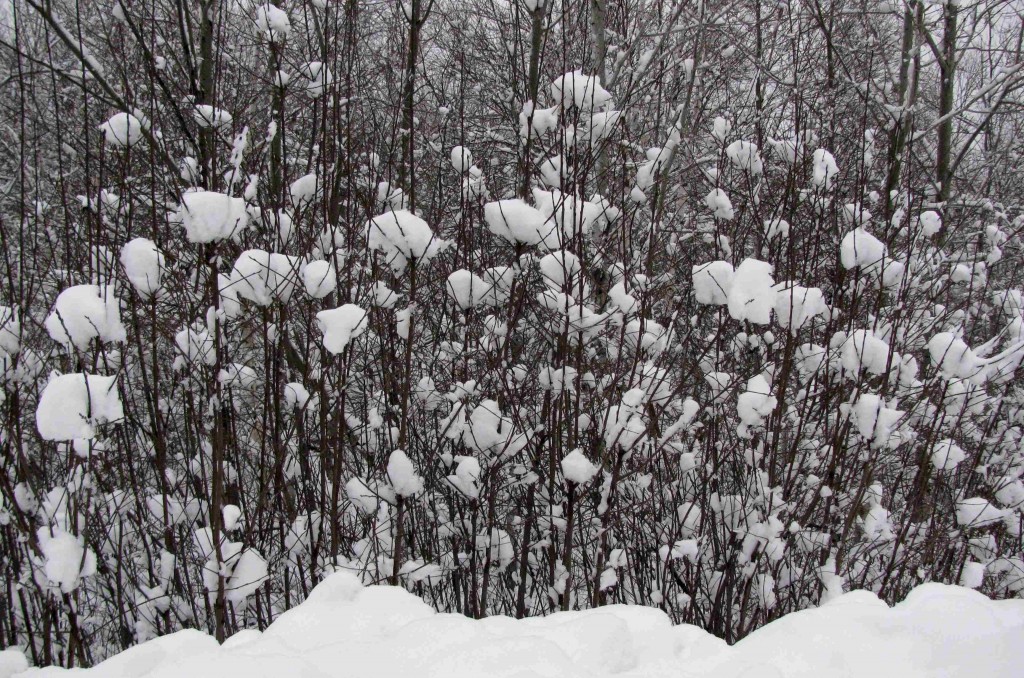 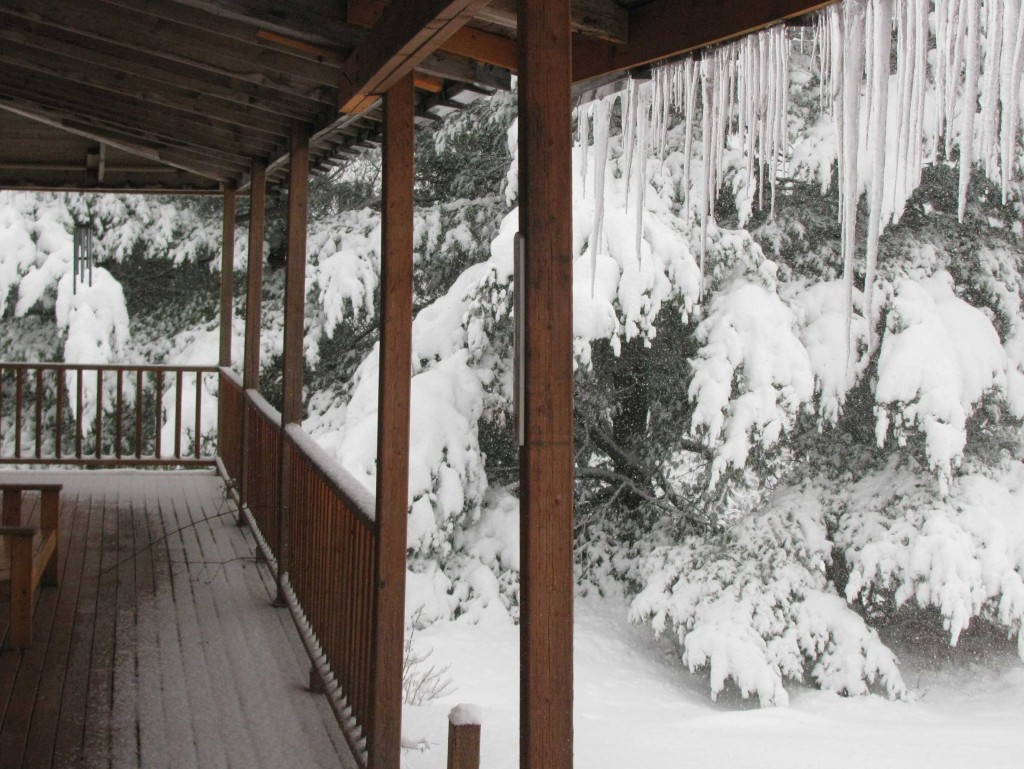 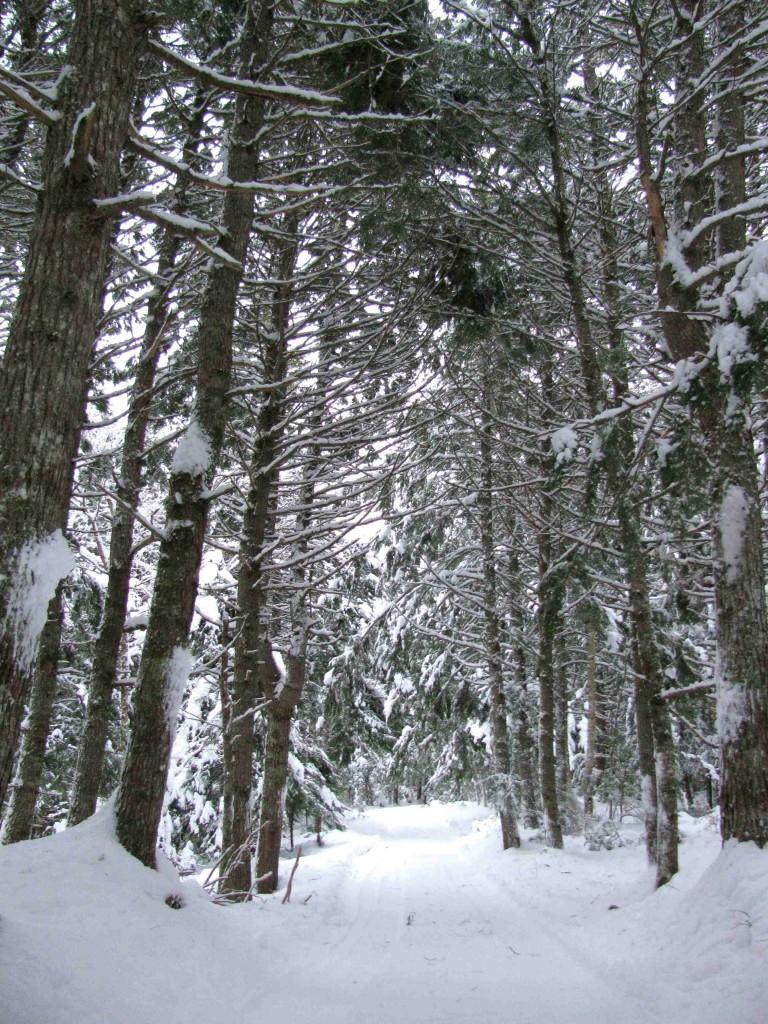 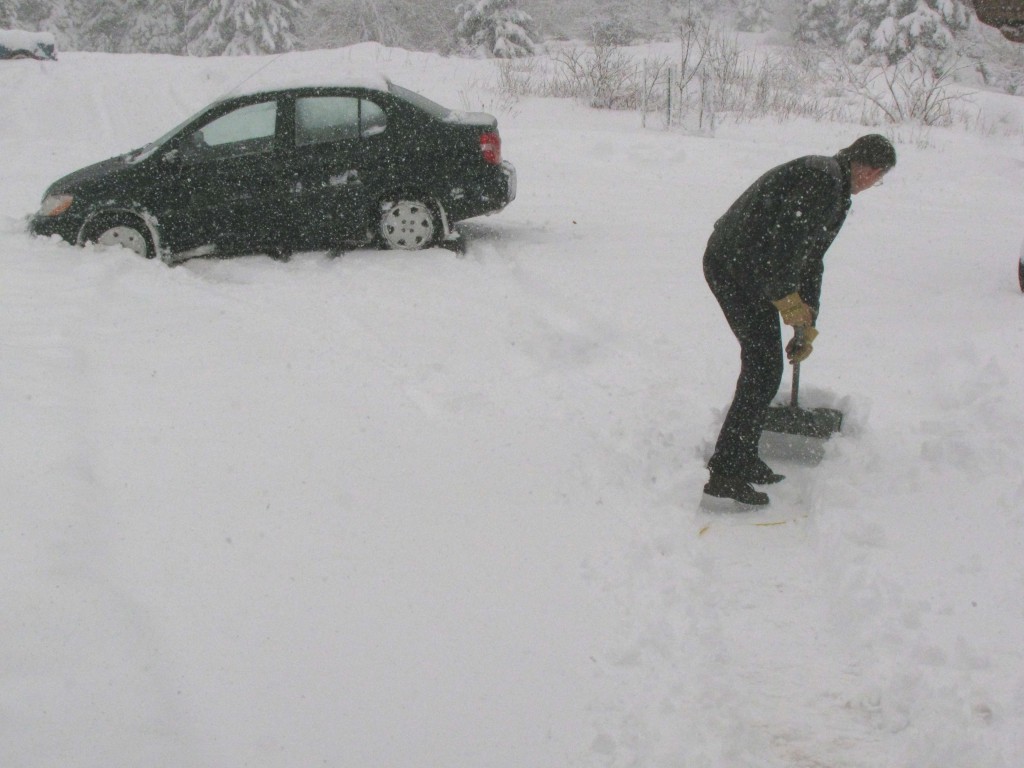 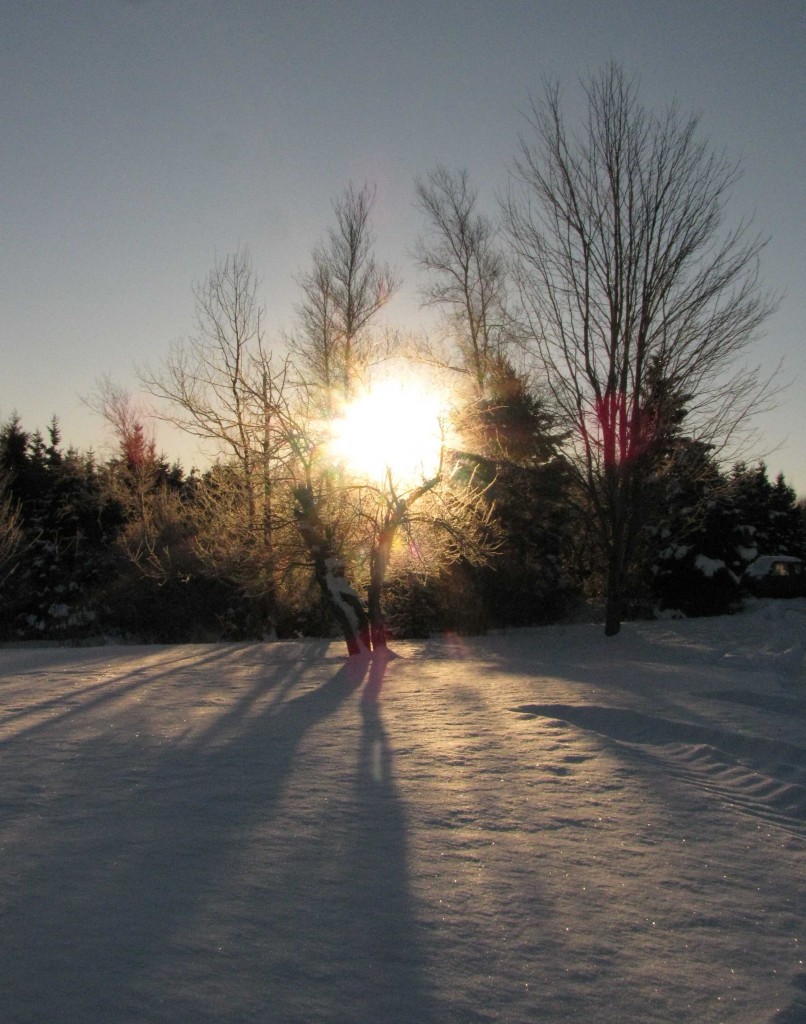 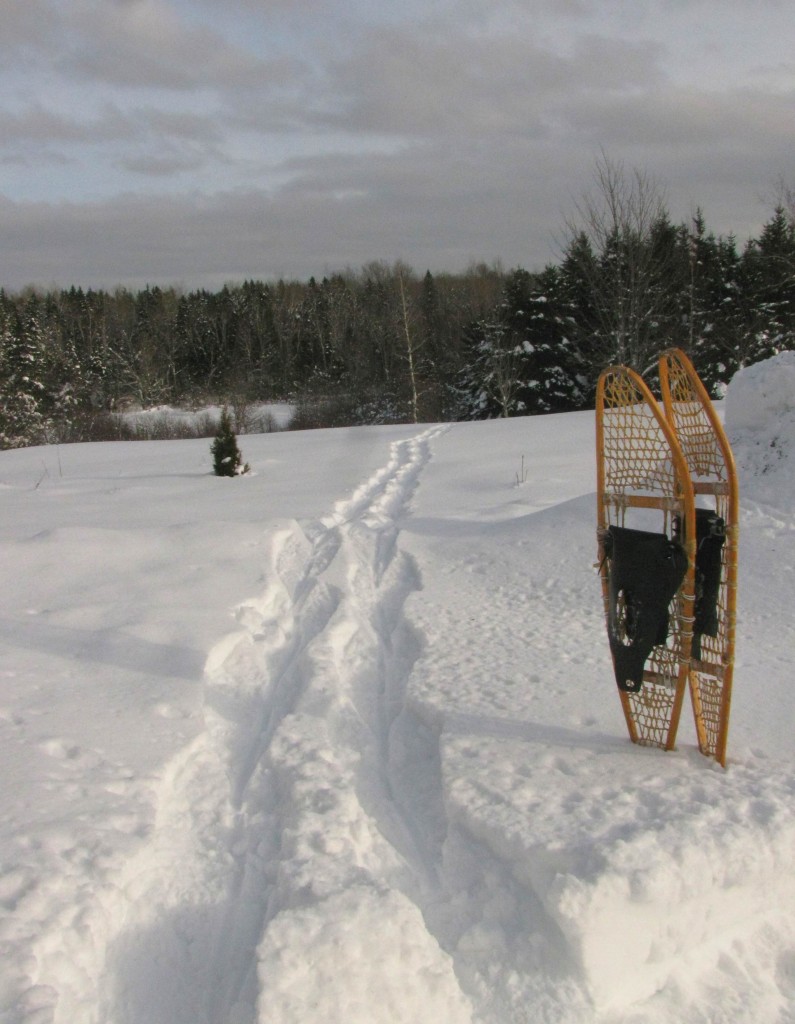