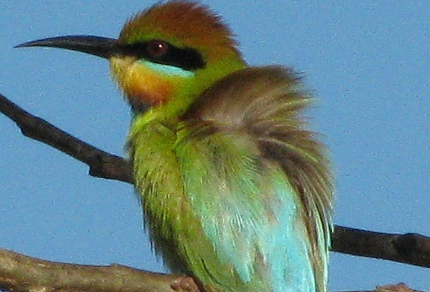 For this week’s featured bird, we’ll travel to Australia to meet the rainbow bee-eater, Merops ornatus. With its brilliant plumage of blue, green, black and rust, this species lives up to the meaning of its scientific name, “ornate bee-eater.” Male and female rainbow bee-eaters look much alike, although males possess noticeably longer central tail shafts than do females. 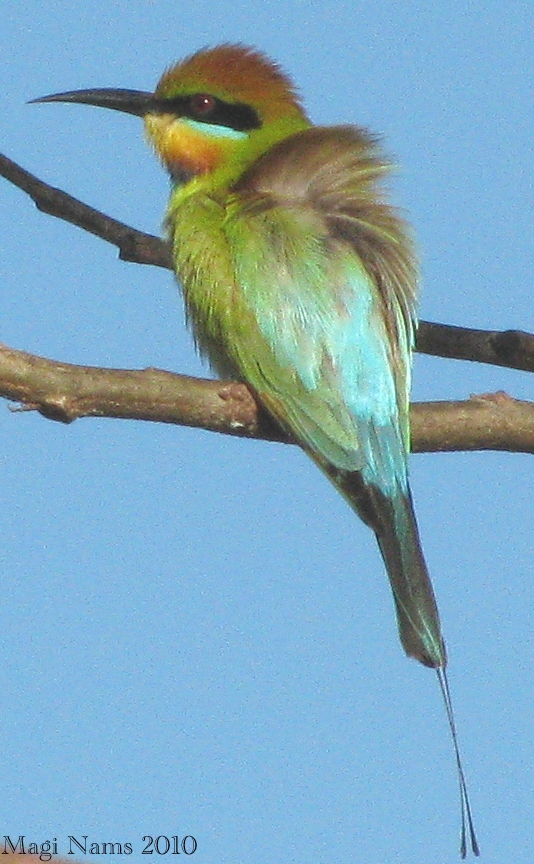 The rainbow bee-eater is the only Australian member of the avian family Meropidae, which is composed of 24 bee-eater species that occur from Europe and Africa east through Asia and southeast into Australasia, although none inhabit New Zealand.1 The rainbow bee-eater can be found throughout much of Australia, with the exception of Tasmania.2 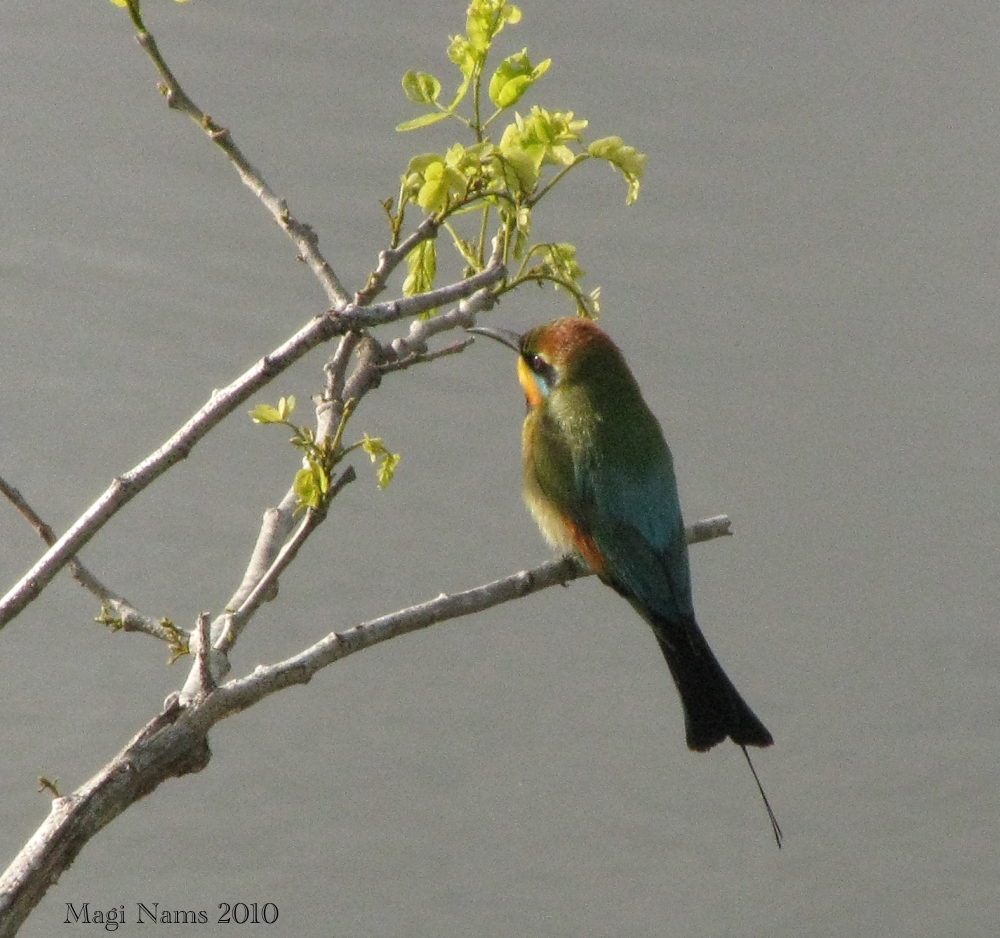 All bee-eaters are brightly-coloured and acrobatic insect-hunters that neutralize or remove the stingers of potentially poisonous prey, such as bees and wasps, before eating the insects or feeding them to offspring or a mate.1

Incredibly fast and agile, rainbow bee-eaters dash into the sky in pursuit of insects. They perform arcing glides, swooping dives and pursuit manoeuvres that would rival or exceed those of any fighter pilot. 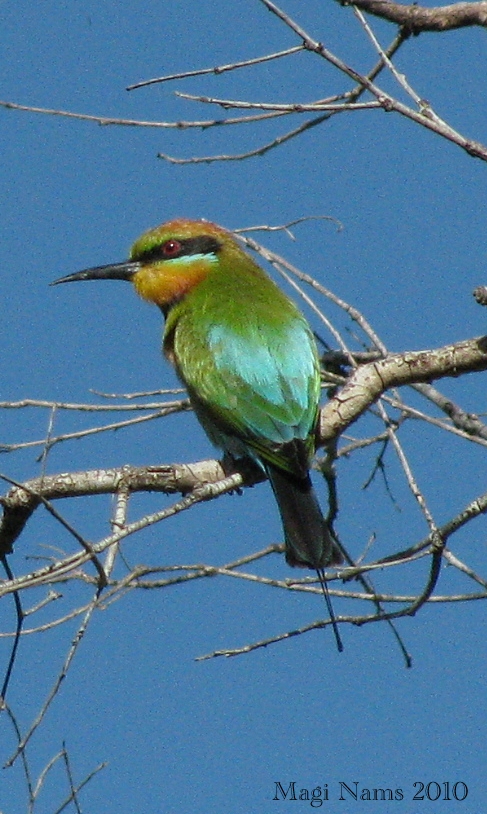 In Queensland, I observed rainbow bee-eaters zeroing in on targets, snatching them out of the air with their slender, curved beaks and then gliding back on triangular wings to exposed perches on fences, power lines or branches. On the Townsville campus of James Cook University, I watched a bee-eater bash a large butterfly against its perch branch to de-wing it before consuming it.

The courtship and bonding ritual of rainbow bee-eaters involves pecking and digging on sandy ground (potential nesting site) by both males and females.3 Once the mating bond is established, the female bee-eater digs a metre-long tunnel and a nest chamber in the soil by loosening grass and soil particles with her beak and then kicking them backward while balancing on the ground on her chest and “elbows.” She excavates only if her mate is nearby to stand sentinel and warn her of danger.3 In good nesting sites, rainbow bee-eaters may nest in loose colonies, with helper birds assisting the breeding adults.2 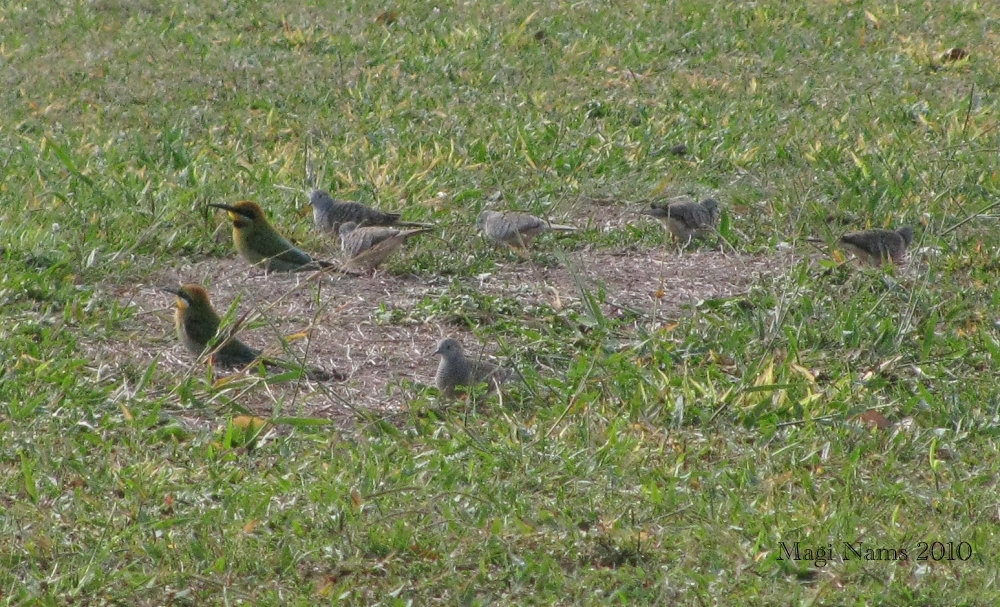 I may have unknowingly seen such a colony in the Townsville suburb of Annandale, where one morning, bee-eaters were everywhere, perched in trees and on the gently sloping, mowed bank above Ross River. I’d never before seen so many bee-eaters on the ground. However, I didn’t then realize that bee-eaters nest in the ground rather than in trees, so didn’t make the connection. I simply soaked up their beauty, their multi-hued plumages like rich scraps of satin tossed onto the grass. 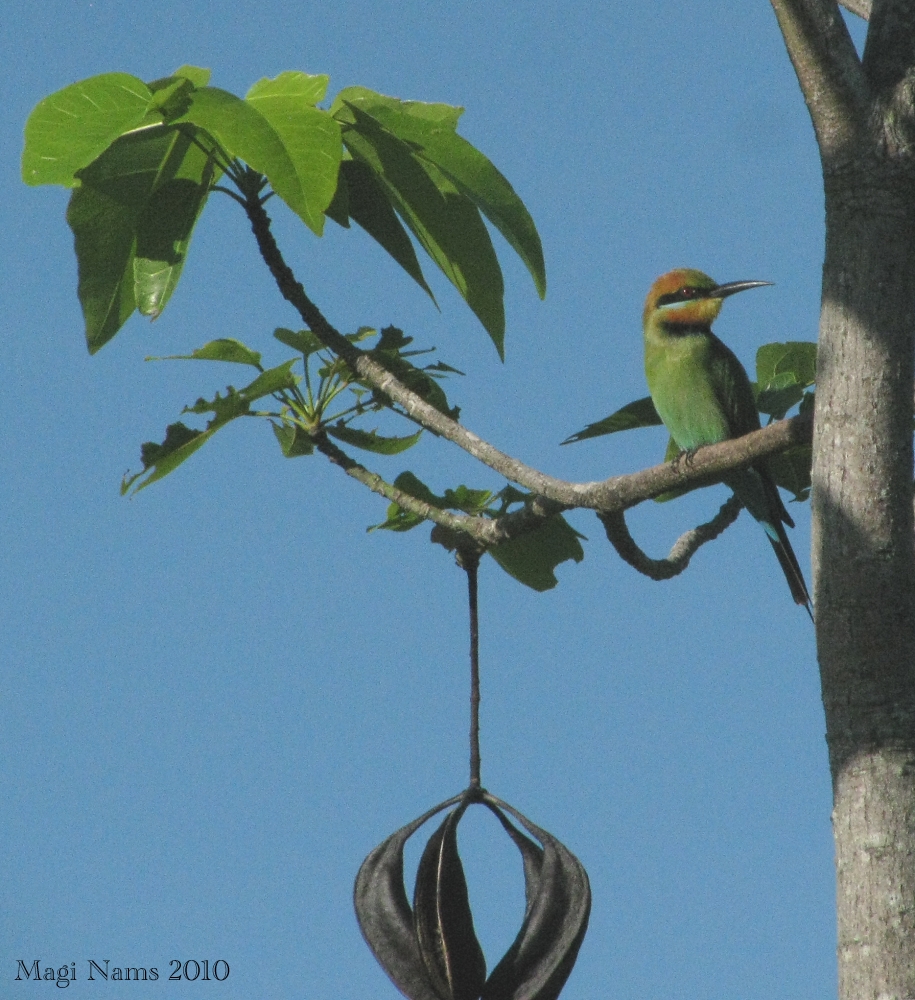