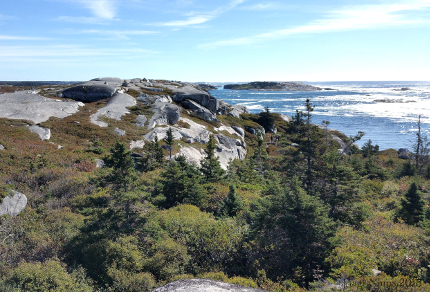 Polly Cove (or Polly’s Cove) is located on Nova Scotia’s rocky, windswept South Shore 45 kilometres southwest of Halifax and 2 kilometres east of world-famous Peggy’s Cove.  Access is from Highway 333. The trailhead and trails are unmarked, so look for small parking areas on both sides of the highway. The main access trail to Polly Cove leads from the parking area on the coastal side of the highway directly toward the shore, with side trails branching off it. The landscape is coastal barrens characterized by exposed granite outcrops, tenacious, low-growing vegetation, and sphagnum bogs in low areas. In good weather, views are spectacular. 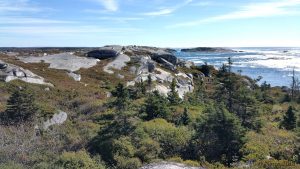 At Polly Cove, hikers can hike a 3.9-kilometre loop trail or explore the web of trails over the barrens. Although the main access and some trail sections offer easy hiking, AllTrails rates Polly Cove Trail as moderately difficult, likely due to uneven terrain and sections of narrow, brushy, or boggy trail. Hikers are encouraged to stay on trails to protect the sensitive barrens vegetation. 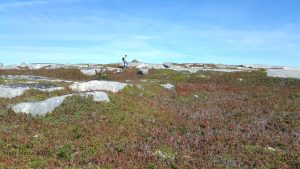 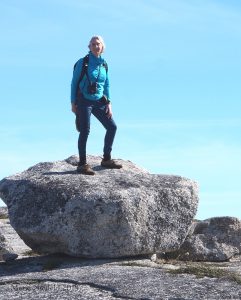 I first hiked the Polly Cove barrens almost forty years ago, when I was a graduate student at Dalhousie University in Halifax. A fellow student had mentioned cranberry picking at Polly Cove, so I set off with bucket in hand and my dog, Skyree, and spent hours exploring the stark landscape, glorying in the sight of surf pounding against the rocky shore, and of huge boulders—glacial erratics dropped by an ice sheet that melted 12,000 years ago—perched atop granitic bedrock scraped by glacial action into rounded mounds known as rôches moutonnées (sheepback rocks).

Due to past glaciation, the soils at Polly Cove are thin and nutrient-poor. That fact, along with the barrens’ exposure to severe coastal weather make the area a harsh environment for plant life. Crustose and foliose lichens cling to bare rock faces. Drought-tolerant xerophytic plants such as bearberry, wintergreen, crowberry, and common juniper grow in rock cracks and at outcrop edges, while mesophytes like Labrador tea, huckleberry, alder, and stunted conifer trees inhabit protected hollows. Moisture-loving hydrophytes like sphagnum moss, cranberry, and pitcher plant grow where water pools among the rocks and in lowland bogs.

While a student at Dal, I returned to Polly Cove again and again and, as a director (I was then Magi Nietfeld) with the Halifax Field Naturalists, I coordinated the West Dover–Peggy’s Cove Barrens project aimed at informing the public about the geology, history, soils, birds, and vegetation of the South Shore barrens stretching from West Dover to Peggy’s Cove, including Polly Cove.

In 1982, I completed my graduate studies and left Nova Scotia, only to return eight years later and set down roots. Again Polly Cove enticed me to it, now with my husband and sons. Cranberry picking at Polly Cove became an annual event for many years. Here’s an excerpt about those cranberry-picking excursions taken from my newest non-fiction work-in-progress, Seeker at Matheson Brook:

“Tomorrow will be the first Thanksgiving Day we’ll celebrate at Ravenhill without eating cranberry sauce made from berries that we, ourselves, have picked. Every other October during the past six years, whether in wind and cold or sun and warmth, we gathered cranberries at Polly Cove on the barren, boulder-strewn landscape of the West Dover–Peggy’s Cove Barrens. There, on the glacier-scraped spine of Nova Scotia’s South Shore, we scrambled over rounded granite outcrops and collected wave-strewn or gull-dropped treasures of sand dollars and sea urchin tests. We marveled at pitcher plants and, of course, searched for plump berries hanging amid miniature Vaccinium leaves and sphagnum moss. All around us, glacial erratics—gigantic, stranded boulders once carried by a glacier that melted twelve thousand years ago—loomed like frozen sentinels forever on display against sky and sea.

The barrens are a wild landscape, a hard landscape, a landscape of rock and crashing waves and hardy plants clinging. My family goes there as much for the wildness as for the cranberries. When we’re home again and eating those cooked and sweetened berries, we taste the barrens—the wind and cold, the sun and warmth, the rock, the sea, the wildness.” 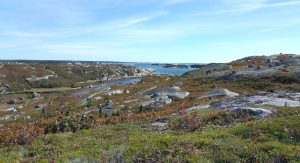 Two weeks ago, Vilis and I, along with my sister, Marie, returned to Polly Cove yet again. Buckets in hand, we searched for cranberries to accompany our Thanksgiving dinner and revelled in sunshine, fresh breezes, and the barrens stretching bold and beautiful in all directions around us. Our harvest was meager, but the views were breathtaking. If you’re in the Halifax area and looking for a hike with a super-high view-to-forest ratio, Polly Cove is definitely the place to go. 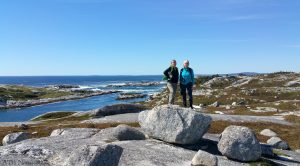