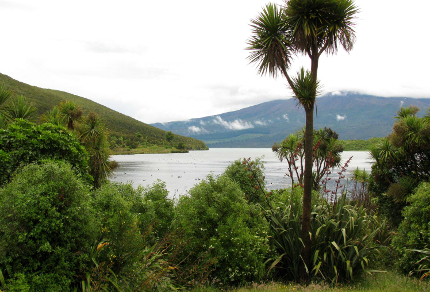 Again this morning, rain spilled down onto King Country, shrouding conical volcanic hills and serrated ridges. Mist rose from copses of trees, and the Whanganui River ran higher and browner than yesterday. While a load of laundry dried at the Taumarunui Holiday Park, Vilis and I strolled a riverside path and  packed up the ‘micro camper.’ Then we headed south from Taumarunui toward Tongariro National Park with its abundance of tramping tracks and trio of volcanic peaks capping the North Island’s Central Volcanic Plateau. 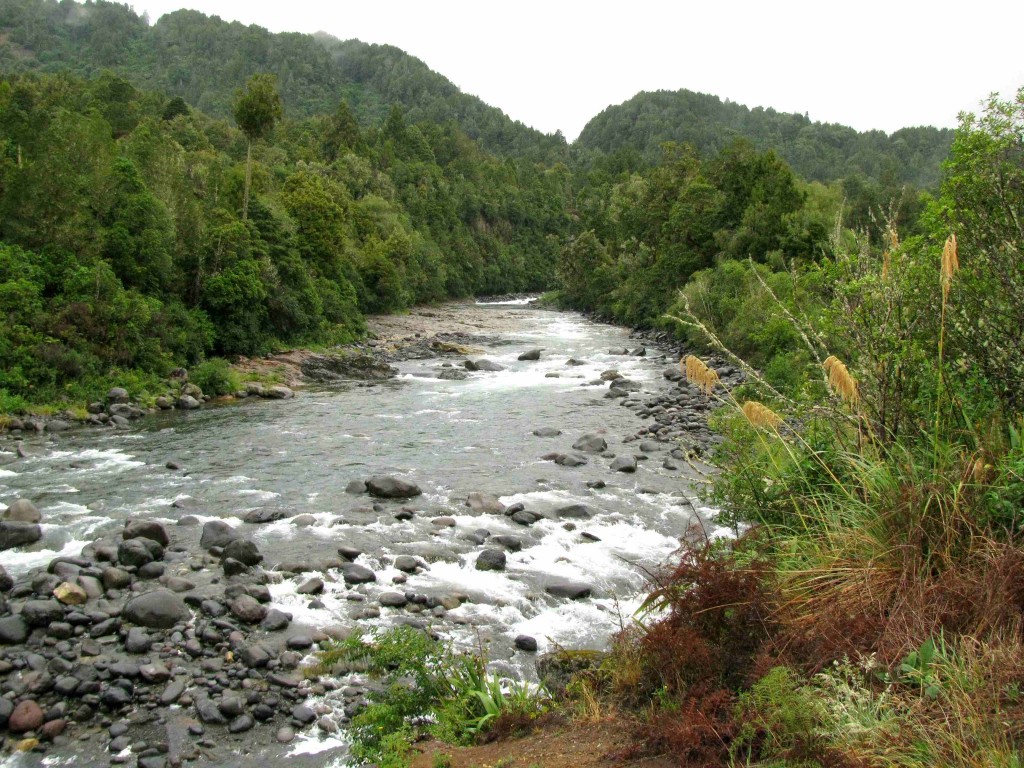 En route to the park, we stopped in at Owhango again (rain heavily socked in) and drove the Ohinetonga Bush Road through the scenic reserve, this time crossing the Whakapapa River and following the road beyond the bridge – called 42 Traverse – until the gravel ended at the commencement of a rough track that entices quadding enthusiasts and mountain bikers, and which was ‘Main Street’ for Vilis’s stoat research within the Tongariro Forest Conservation Area a decade ago. Curving fern fronds and graceful, sodden flowering heads of toetoe arced out over the narrow gravel bordered by dense, regenerating forest. An old pumice quarry loomed pale beneath the dark richness of the forest above it, the height of the abandoned quarry wall offering a glimpse of the depth of pumice underlying the volcanic landscape of the plateau. 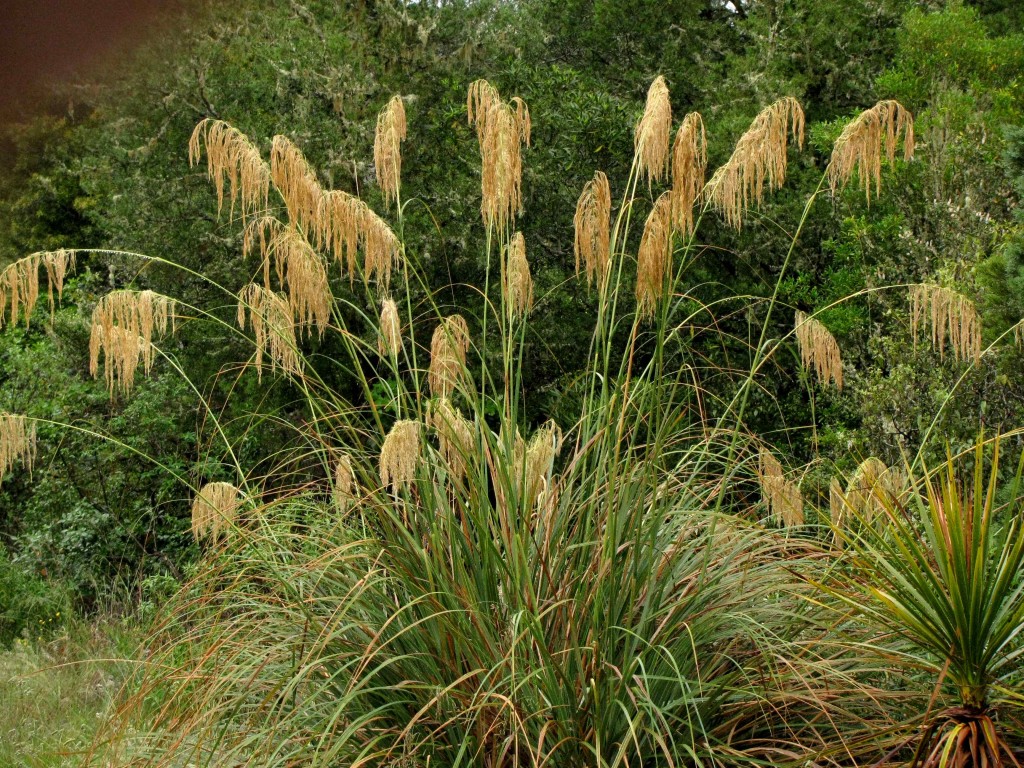 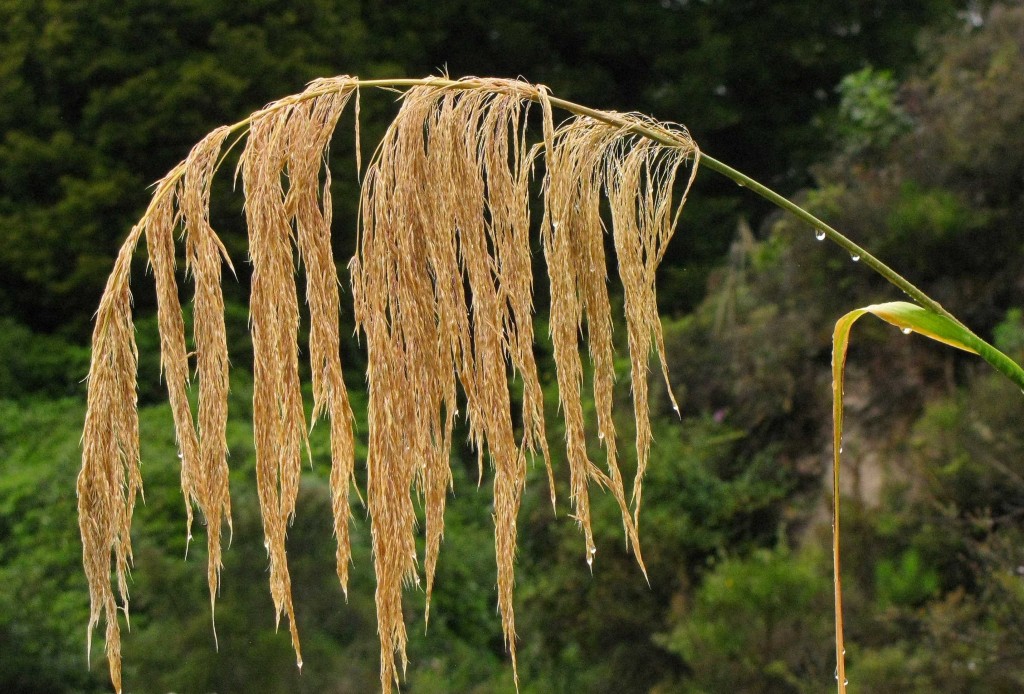 After leaving Owhango, we drove south in rain to National Park and then east to Whakapapa Village, a tourist hotspot on the western slope of Mount Ruapehu that also houses the headquarters for Tongariro National Park. This morning, the village lay wet beneath brooding cloud that poured its guts of cold rain onto the streets and obscured views of Mount Ruapehu and its volcanic cohorts, Mounts Tongariro and Ngāuruhoe. Vilis and I had hoped to hike one or more of the mountainside tracks today and possibly the 18-kilometre Tongariro Crossing tomorrow, but a severe weather warning (thunderstorms, heavy rain, possible flash floods) posted in the visitor’s centre changed our minds, as did a lunchtime thunderstorm that pounded the village with a violent downpour rivalling any of those of the Wet in North Queensland. Curious as to weather conditions upslope, we drove Bruce Road up the western side of Mount Ruapehu into an eerie, dreary landscape of boulder fields and clinging alpine vegetation shrouded in thick fog. Buildings on the Whakapapa Ski Field loomed out of the fog like straight-edged spectres, and it was all too easy to imagine becoming lost in that bleak, shattered landscape.

After retracing our route down the peak and through Whakapapa Village out to SH 47, we headed north toward Turangi located near the south tip of Lake Taupo, New Zealand’s largest lake. We passed dense thickets of tea tree and vast flax swamps invaded by yellow-blossoming Scotch broom. I spotted the eastern exit of 42 Traverse, as well as the Mangatepopo trailhead for the Tongariro Crossing. Further north, the landscape became a collage of massive pine plantations and pockets of native scrub forest, the latter within the boundaries of the park. 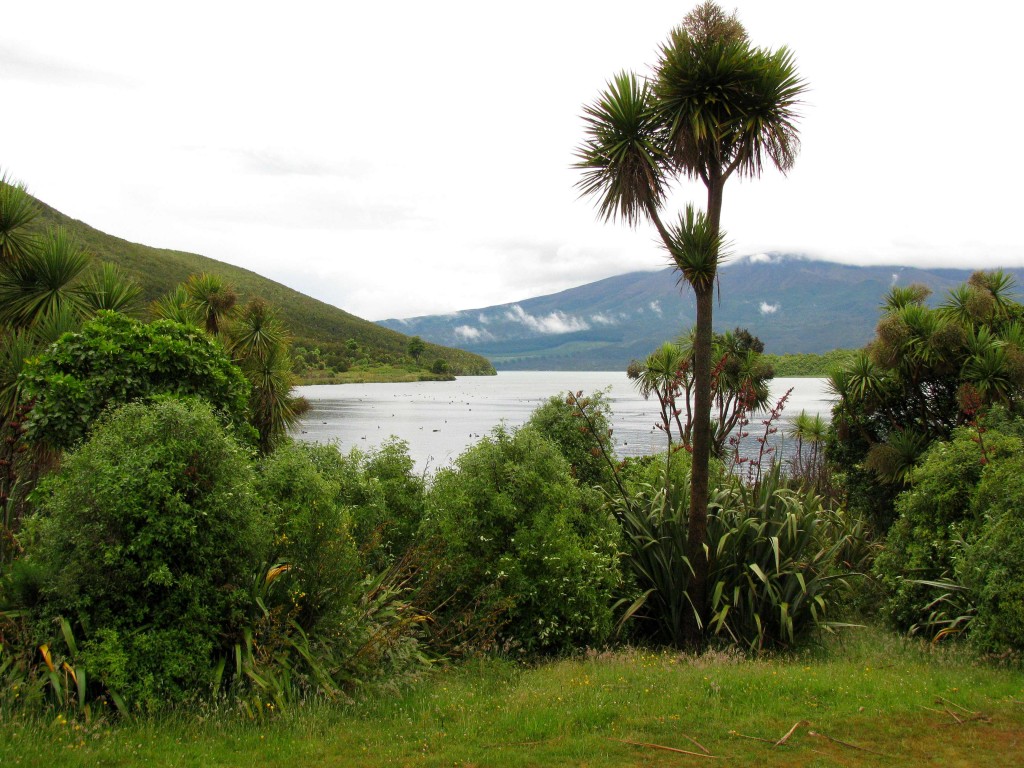 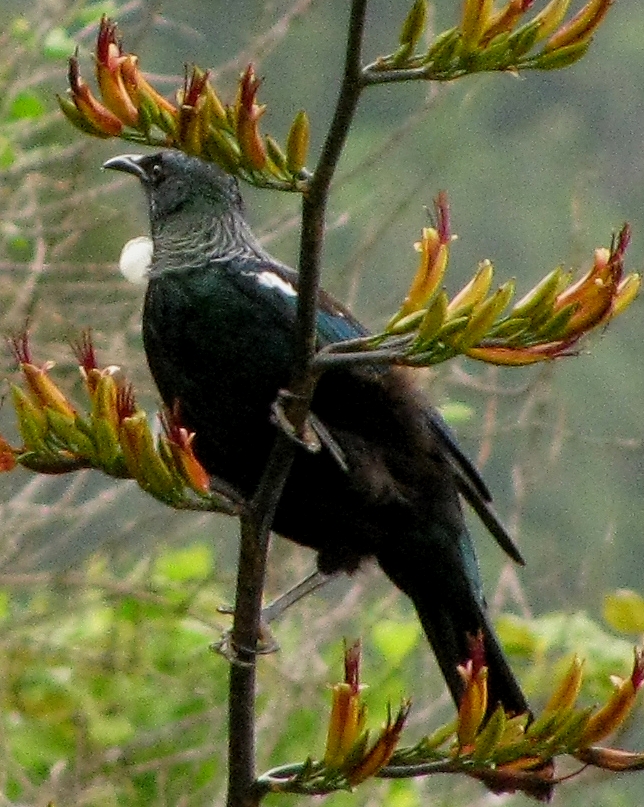 We paused briefly at Opotaka, a Māori historical kainga (village) with a fabulous view out over Lake Rotoaira. An island in the lake was formerly used as a pā or fortress by the villagers in times of danger. Old pallisade fences built of thin tree trunks enclosed the village, which showed its former occupation only via the fences, two old house sites and several storage pits. Black swans and a rather startling abundance of Canada geese dotted the lake surface, and pairs of New Zealand scaups swam near shore. Welcome swallows flew graceful, darting flights over the water and shore, hawking for insects, and tūī possessing white balls of neck feathers called poi fed on the nectar of red-tinted flax blossoms above massive clumps of the flax’s strap-like leaves. Cabbage trees – one of New Zealand’s most distinctive tree species – lofted round clusters of dagger-like leaves against the sky, as though bent on puncturing it with an arsenal of photosynethetic spikes. 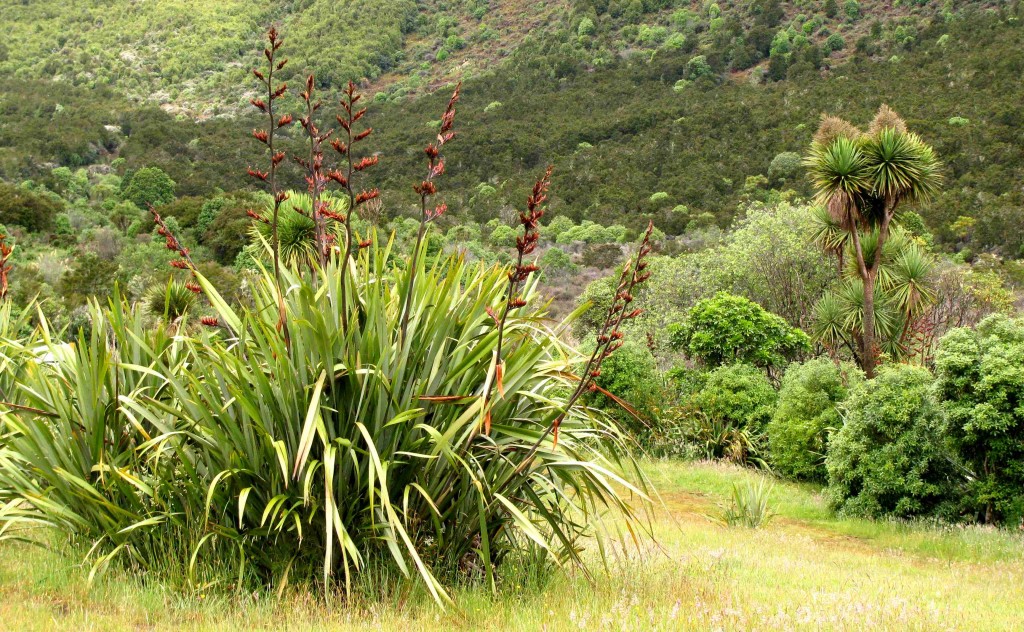 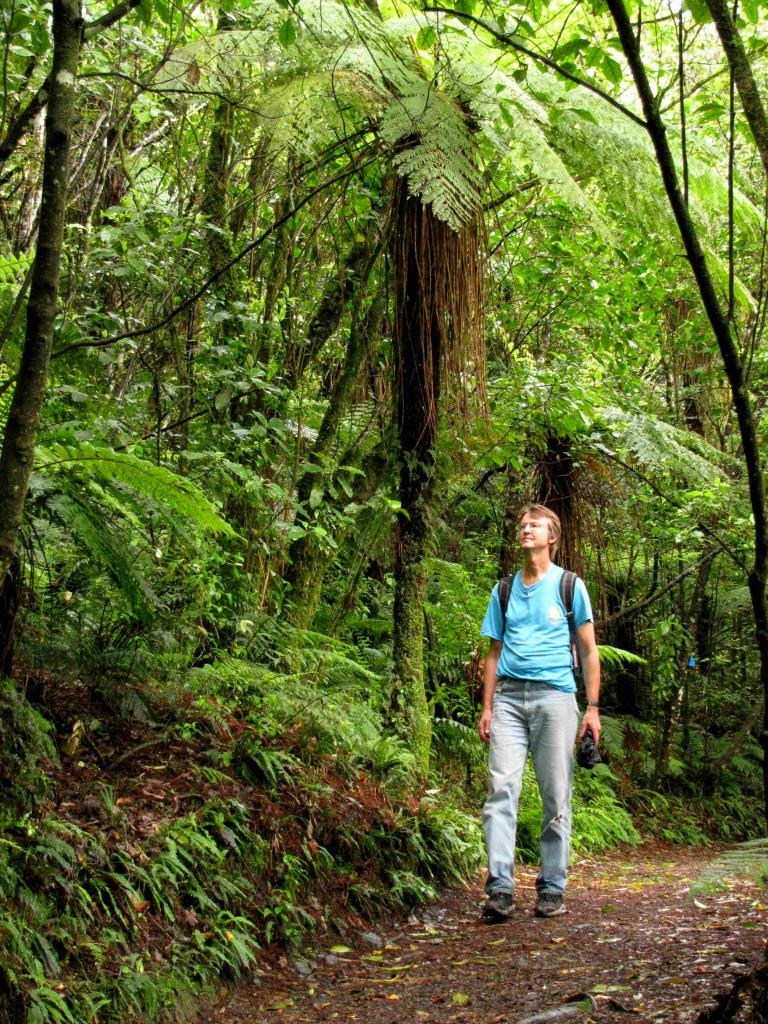 A short distance beyond Opotaka, we pulled into a carpark opposite the access to a 5-kilometre track that circumnavigated Lake Rotopounamu. With umbrellas in hand, we tramped through dense, rain-wet rainforest having an overstory composed of thick-trunked red beech, broad-leaved black maire, and soaring, needle-leaved podocarps – miro, rimu, mataī. Silver tree ferns or ponga formed an upper understory layer, while shrubs such as lemonwood, pepper tree, broadleaf, wineberry, and others cluttered a lower understory stratum. The ground cover – the lowest of the four classic strata of New Zealand forests – was comprised of a wealth of ferns, testament to New Zealand’s status as one of the fern-richest countries in the world.

As we hiked through the forest and along sections of lake shore, I spotted a quintet of native bird species – rifleman, robin, tomtit, tūī, and grey duck, the first of these a lifer for me, and all amazingly identified without the aid of my field guide to New Zealand birds, which was backed in a box in Canada. Introduced male chaffinches also flitted about on the shoreline, perhaps plucking insects from the pumice sand. 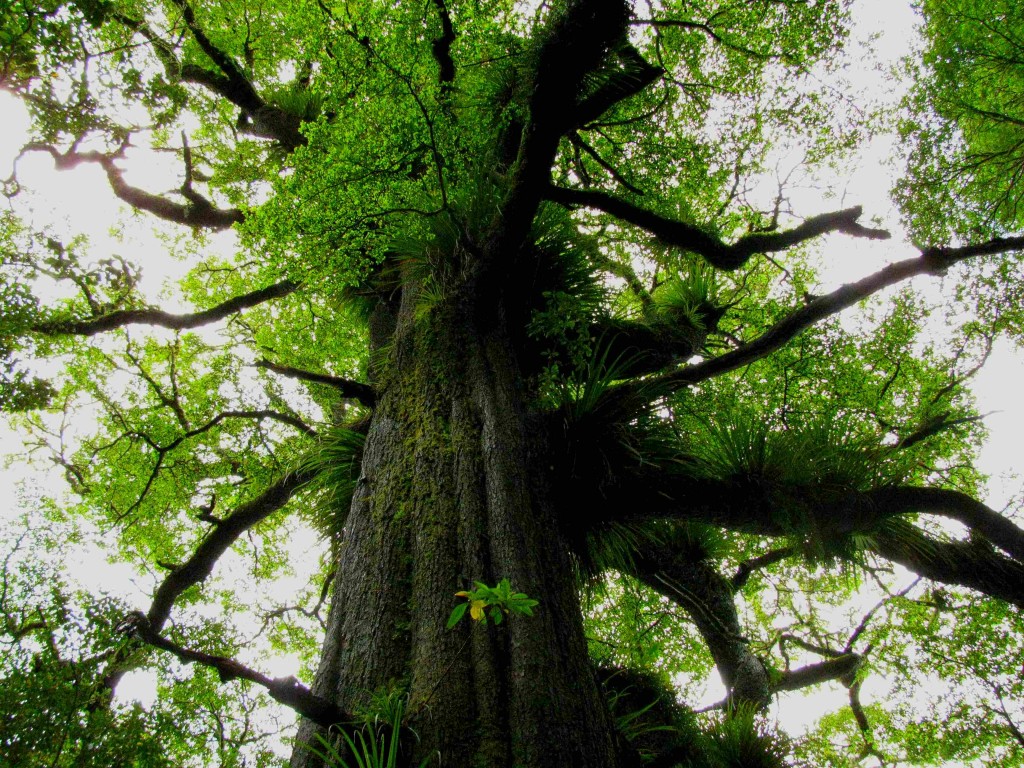 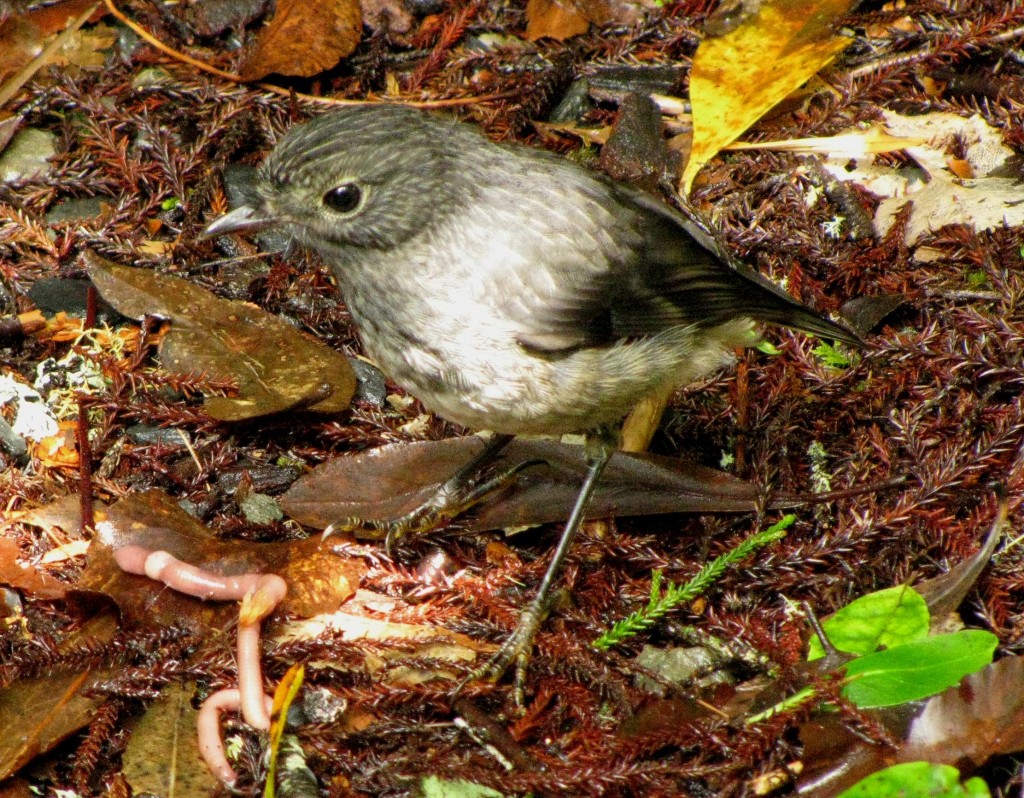 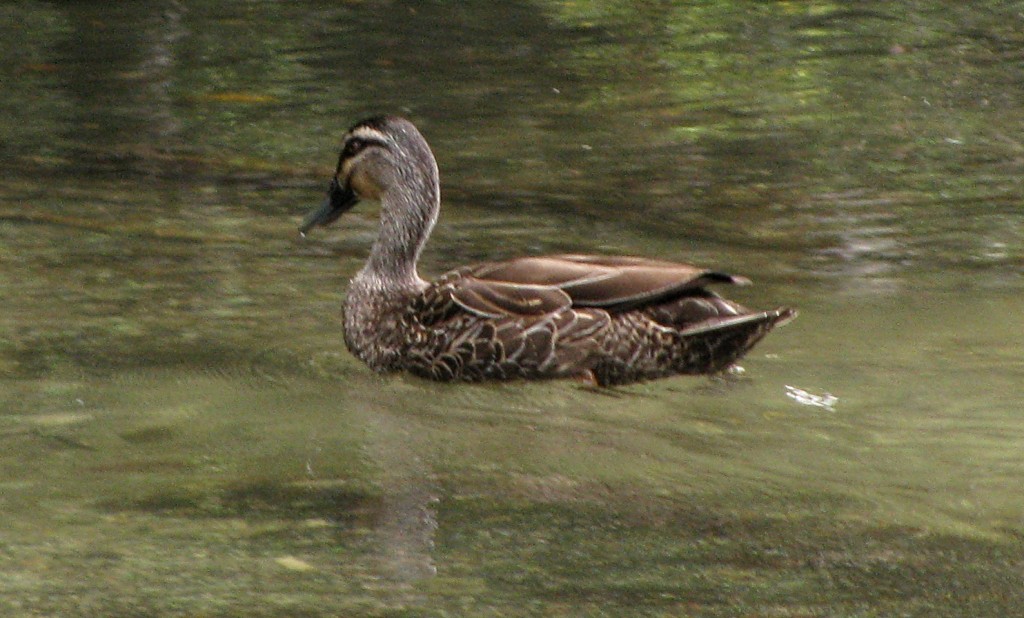 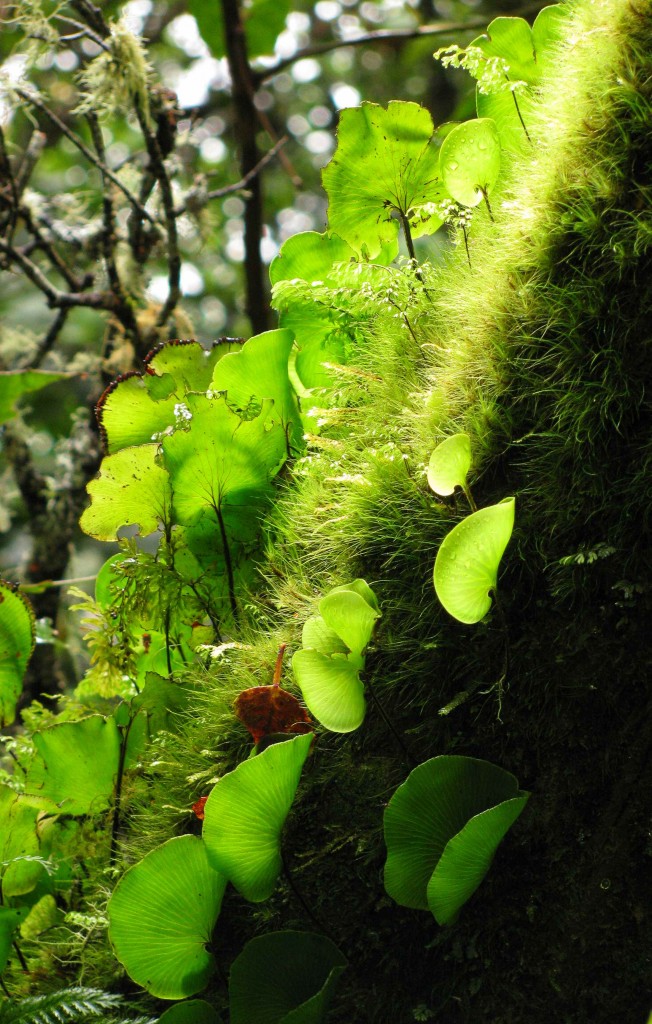 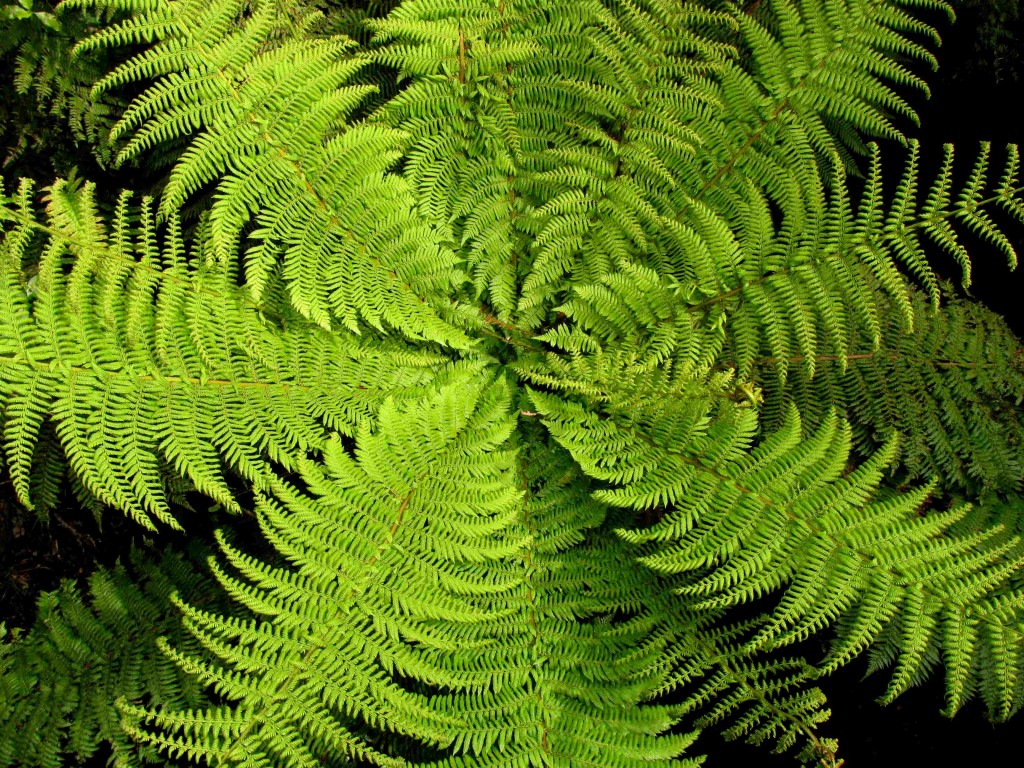 After completing the loop track around the roughly circular lake, we drove north in rain to Turangi and beyond, stopping in late afternoon at the Motutere Bay Holiday Park on the eastern shore of Lake Taupo. There, a large, dry kitchen offered us welcome space to cook and relax before we again squeezed into our ‘micro camper’ micro bed in the back of the station wagon, rain pattering its variable serenade on the car roof and lulling us to sleep.