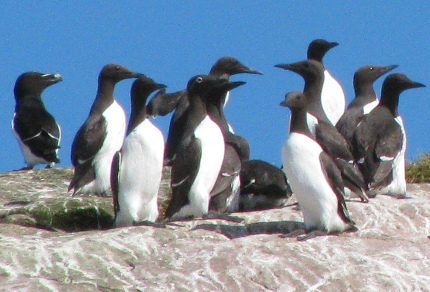 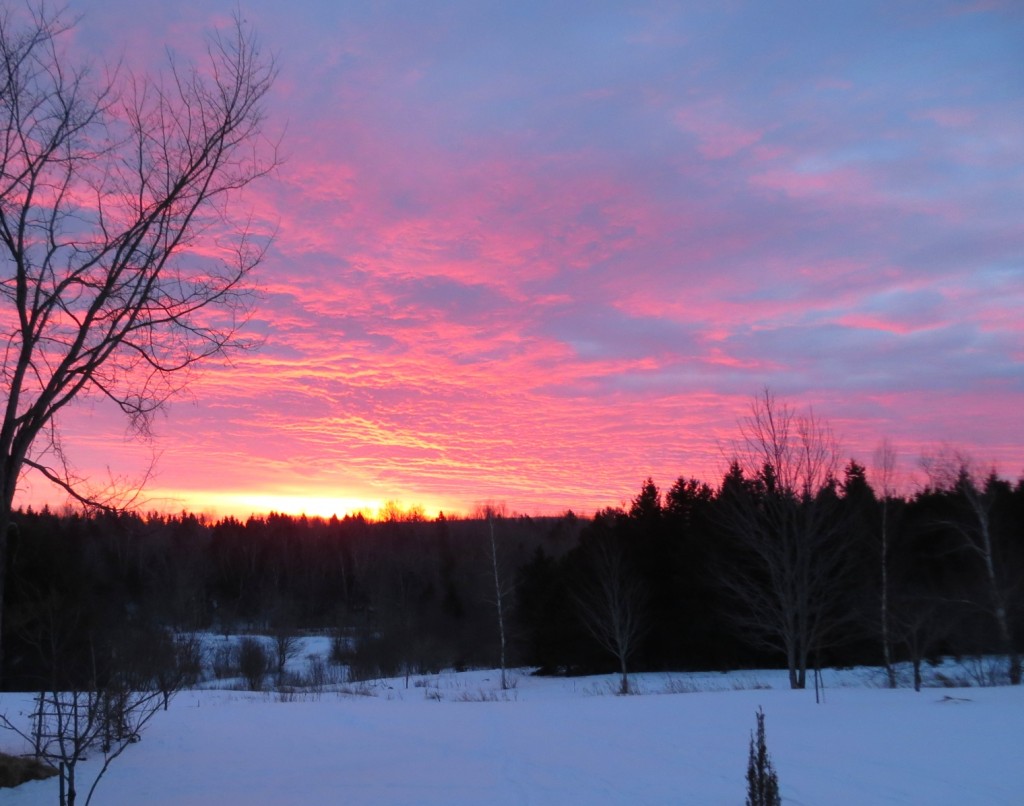 March in Nova Scotia is a changeover time caught between two seasons. Snow still lingers, blanketing fields and woods, but shrinking away from exposed patches of soil and grass. Temperatures bob around the freezing mark, and cloud socked in for days is splintered by brilliant sun in clear blue sky. Vilis put a dozen maple taps out on Saturday, and yesterday, during a mild, sunny afternoon, the sap was running. Spring waits in the wings, officially stepping onto the seasonal stage nine days from today, when the vernal equinox halves day and night for an ephemeral instant. Then light springs away from darkness toward the heady heights of the summer solstice, but that time is yet to come.

Today’s post is my last about Vilis’s and my trip to Newfoundland last summer. Although we enjoyed exploring as much of The Rock as we could in two weeks, our vacation had two highlights. The first was hiking in Gros Morne National Park on Newfoundland’s West Coast; in particular, climbing Gros Morne Mountain (see earlier posts). The second was a boat tour to Witless Bay Ecological Reserve south of St. John’s on the Avalon Peninsula in the southeast corner of Newfoundland.

The Avalon Peninsula has a gentler feel than the northern, more barren reaches of Newfoundland. As in the Codroy Valley in the island’s southwest corner, farm fields and pastures traced the rolling landscape, and we noted herds of dairy cattle. We camped in La Manche Provincial Park, where green frogs sang in a marsh beside the trail to La Manche Falls. I ran that trail in fog one morning, with bird songs muted beside me, and then floated and paddled in a glass-still, mist-shrouded lake, my spirit soaring with the wild cry of a loon. 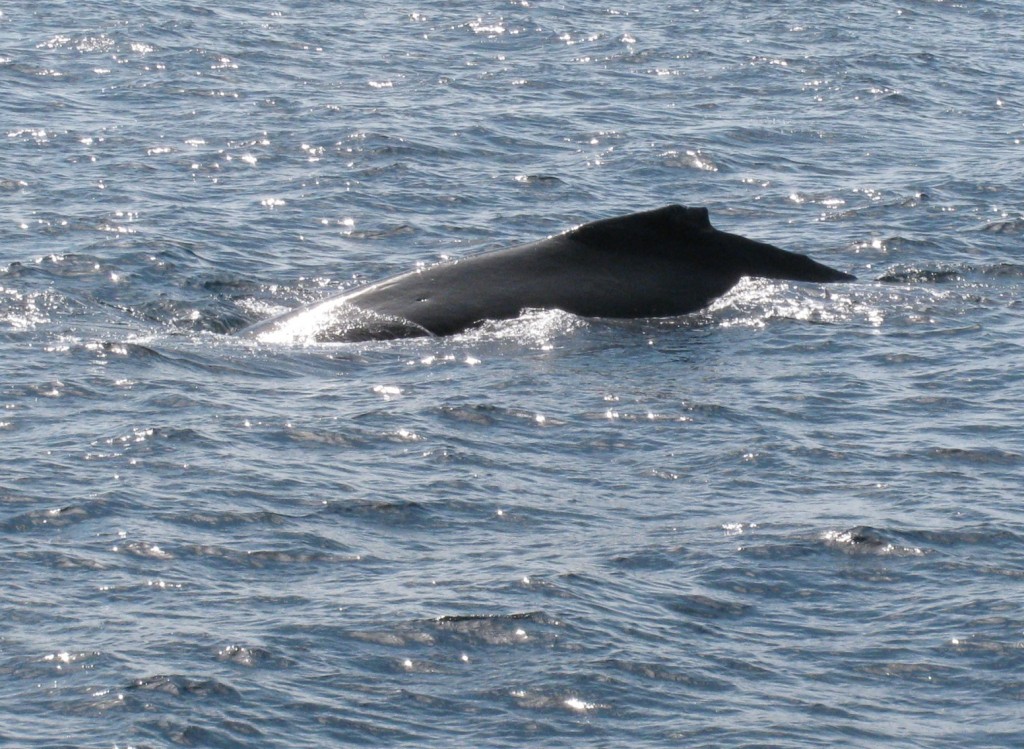 The boat tour in Witless Bay sent our spirits soaring, too. We departed from Bay Bulls in mid-afternoon, thankful for clear skies after a foggy morning. Out in the bay, a female humpback whale glided through the water and tolerated our excited observations with amazing equanimity, remaining in view near the surface right in front of the boat for an extended period of time. A minke whale repeatedly surfaced in the distance, and seabirds – dovekies, Atlantic puffins, common and thick-billed murres, black guillemots, herring gulls, and black-legged kittiwakes – floated on the water and blasted through the air. 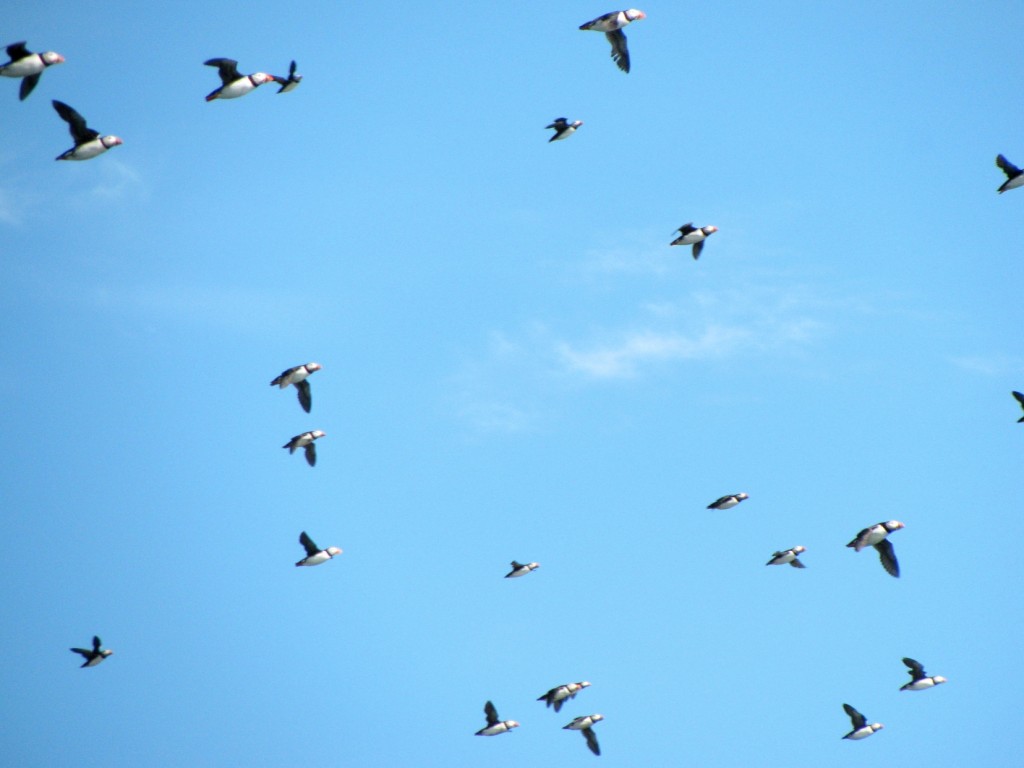 The clouds of seabirds thickened as we approached Gull Island in the Witless Bay Ecological Reserve. Home to North America’s largest breeding colony of Atlantic puffins and the world’s second largest colony of Leach’s storm petrels, the island was covered with seabirds. Puffins, which are Newfoundland and Labrador’s provincial bird, stood near nesting tunnels in thick grass atop the island. Murres, razorbills, and kittiwakes guarded eggs or sunned themselves on rocky ledges. ‘Whitewash’ squirted by the birds had obviously fertilized the island’s grasses and even rock surfaces, the latter creating lush walls of algae and striking natural artworks. 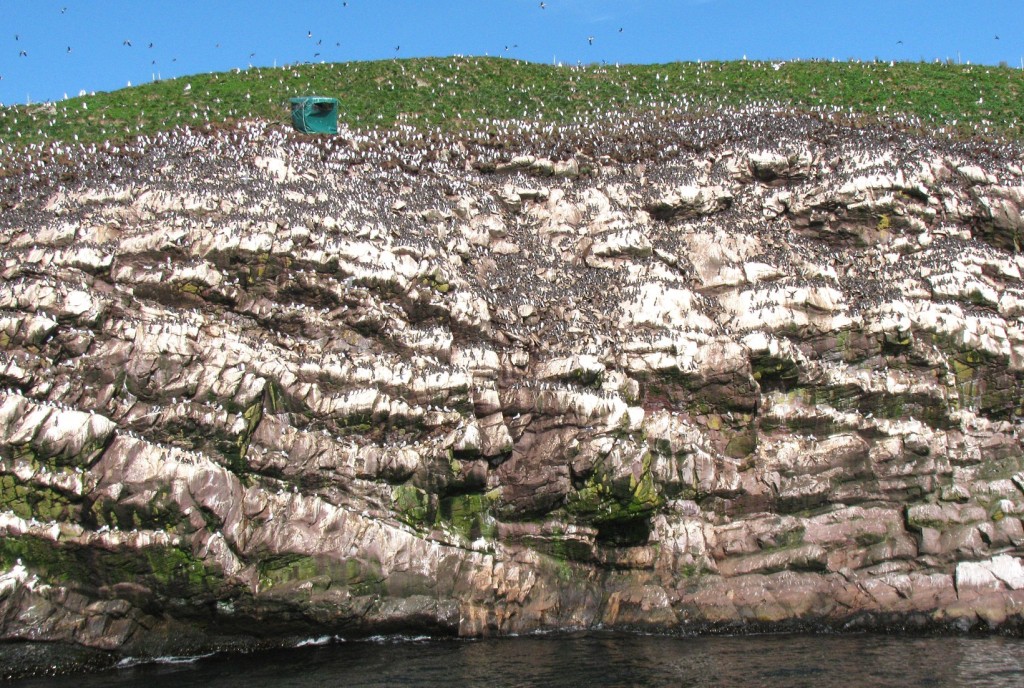 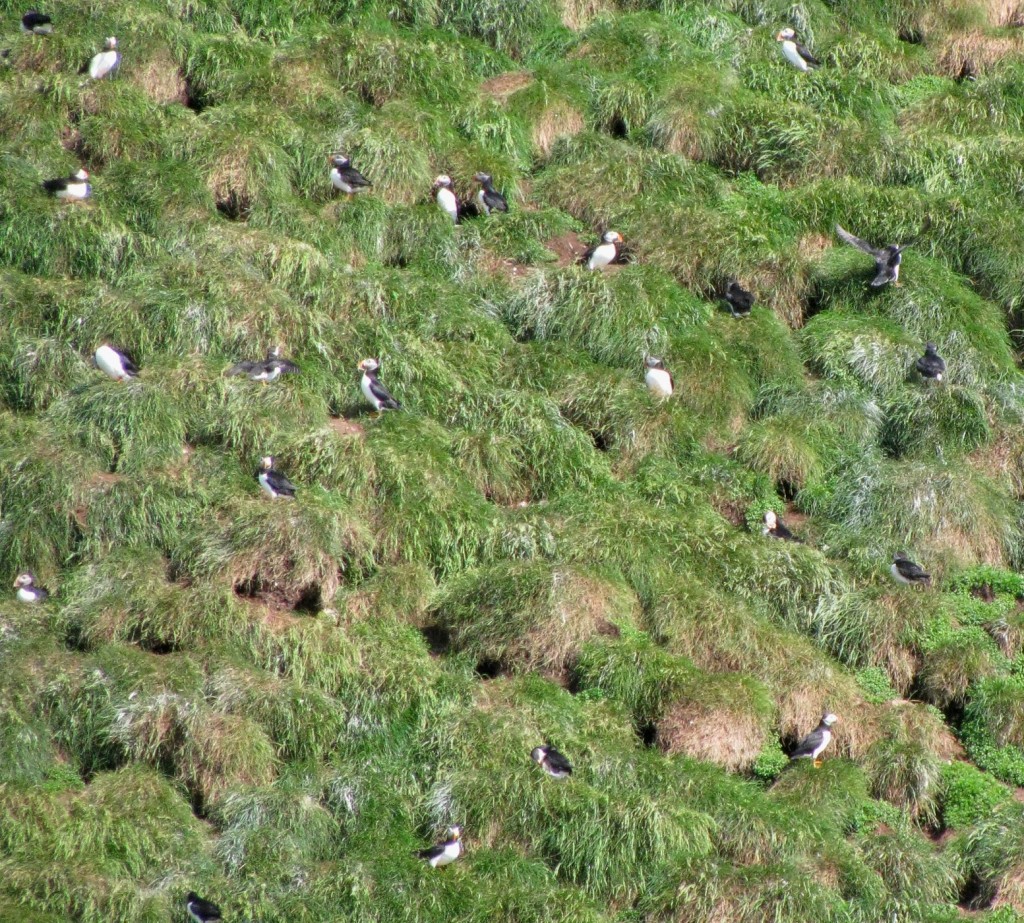 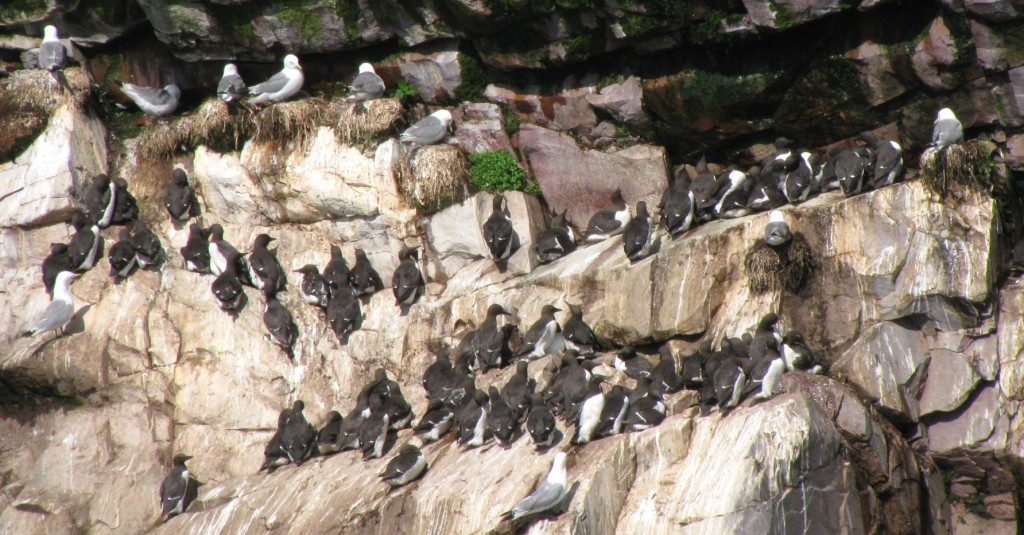 A cacophony of screams and hoarse cries filled the air as we cruised alongside the island, staying well offshore to minimize disturbance. The island’s surface and the air over and around it nearly vibrated with bird life. Neither Vilis nor I had ever before seen anything like it. This sight, even more than the whales and fishing boats, brought home to me the richness of the ocean surrounding Newfoundland. More than 260,000 puffins, 620,000 Leach’s storm petrels, and thousands of murres breed in Witless Bay Ecological Reserve. 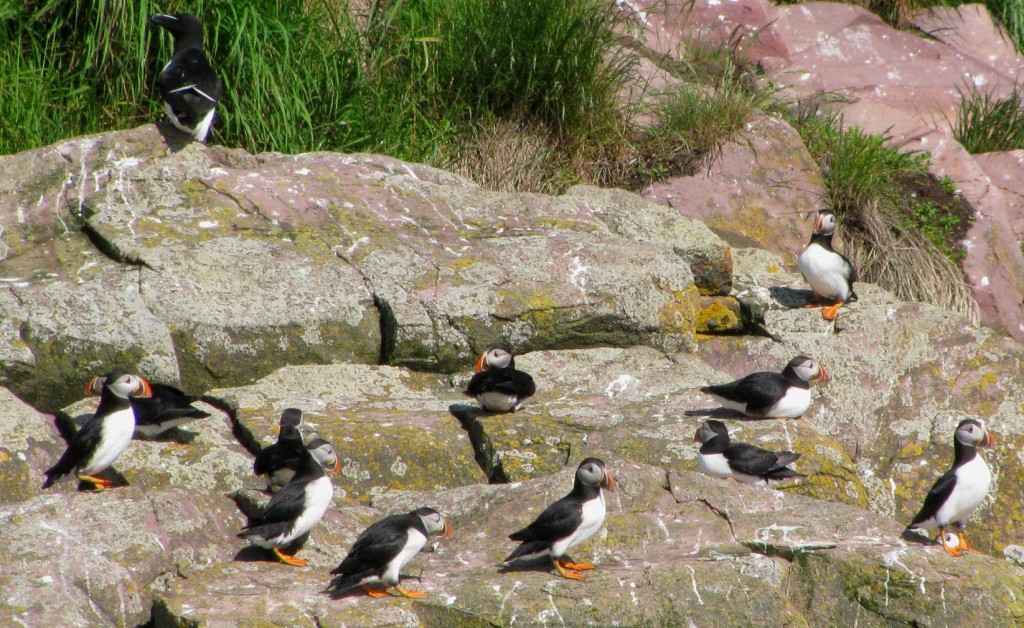 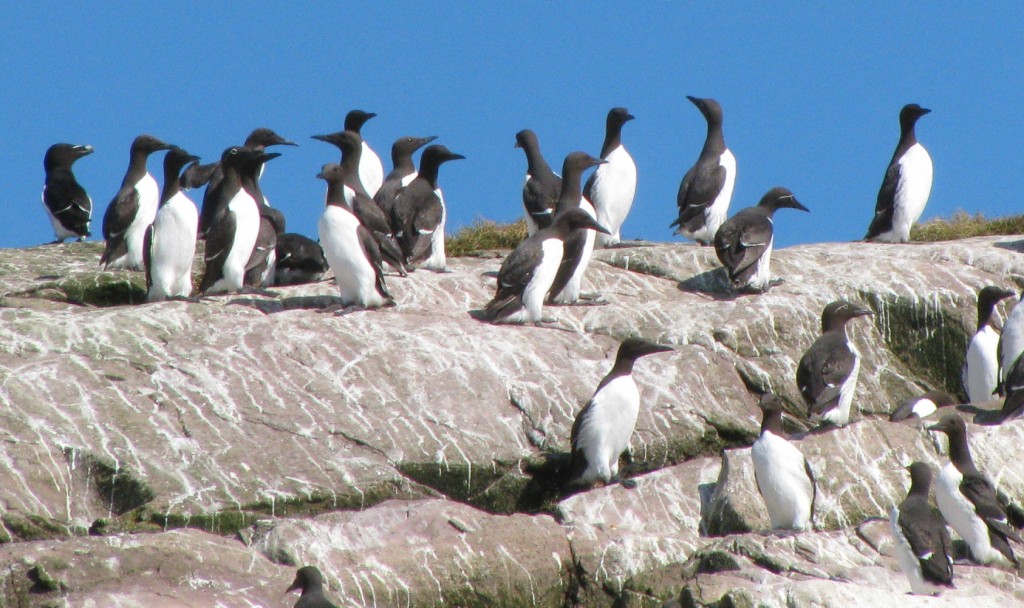 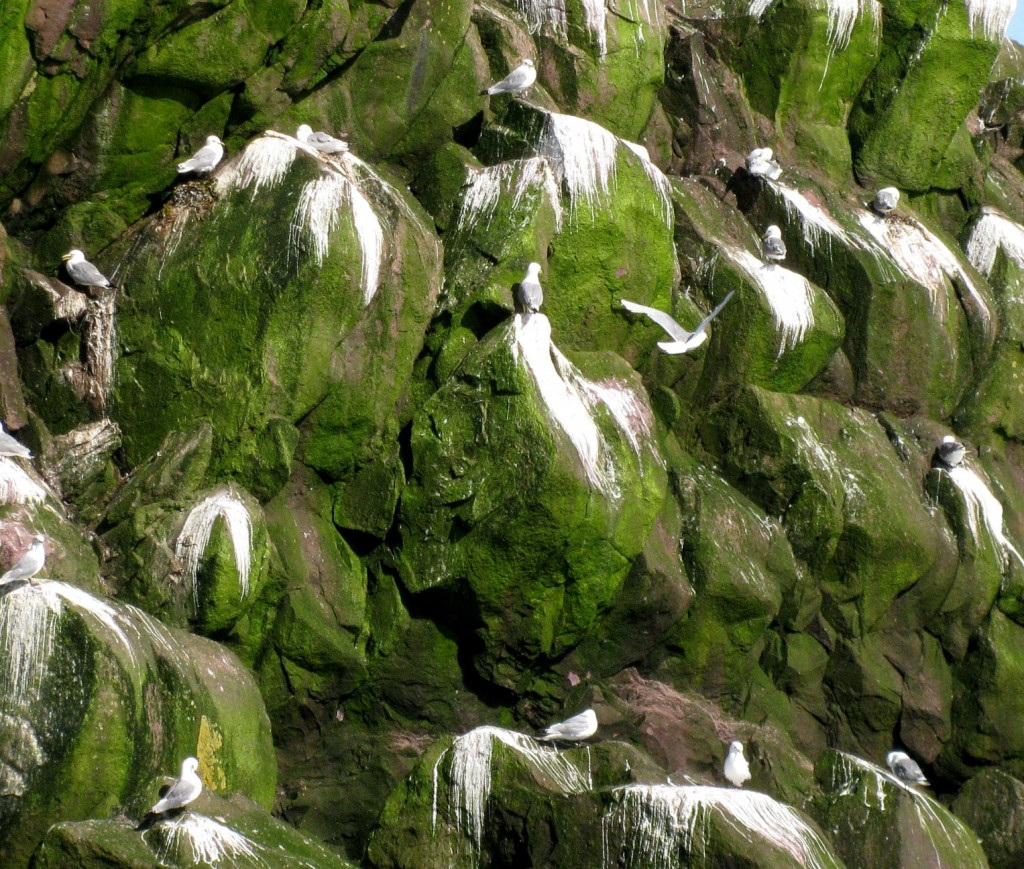 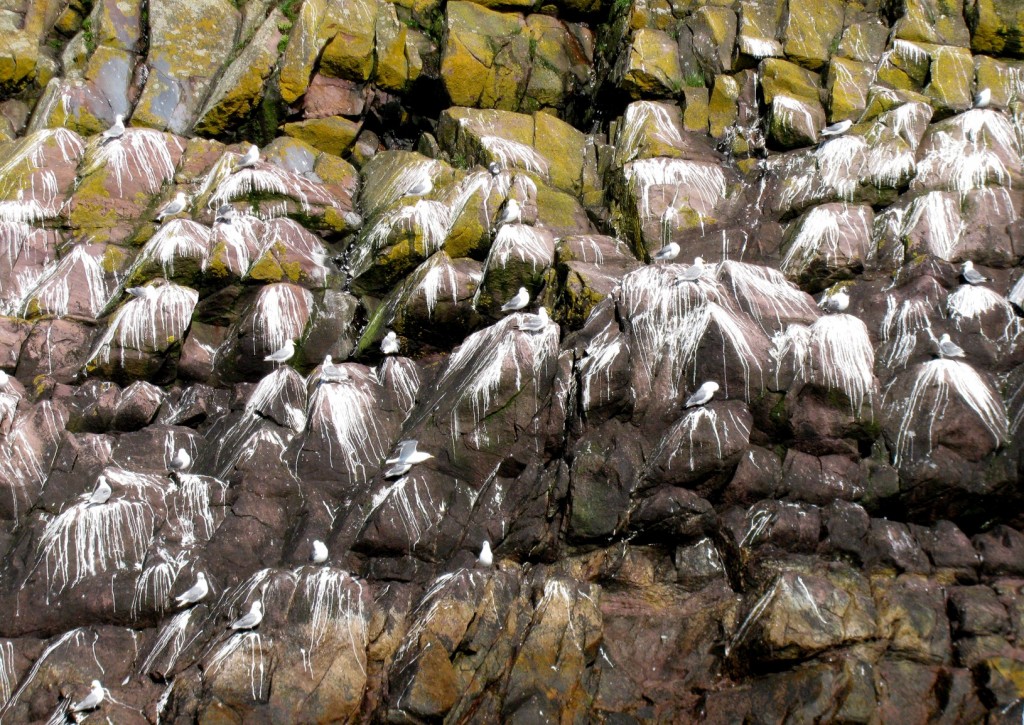 The tour ended too soon and left me wanting more. On our last morning in Newfoundland, we drove to Cape St. Mary’s Ecological Reserve on the Avalon Peninsula’s southwest tip in dense fog and rain that followed on the heels of a wild wind and rain storm the previous evening. We hiked out to a point overlooking Bird Rock and saw northern gannets winging through the fog like spectres and gleaming like beacons in the misty air shrouding the monolith. Then we drove to Argentia and caught the ferry, riding fourteen hours over stomach-rolling waves home to Nova Scotia. 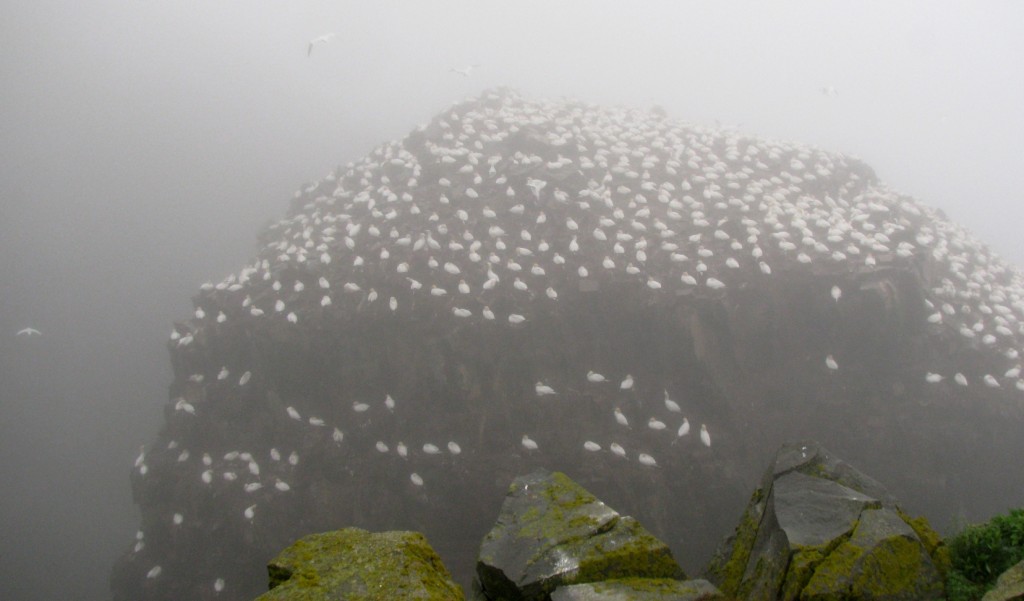 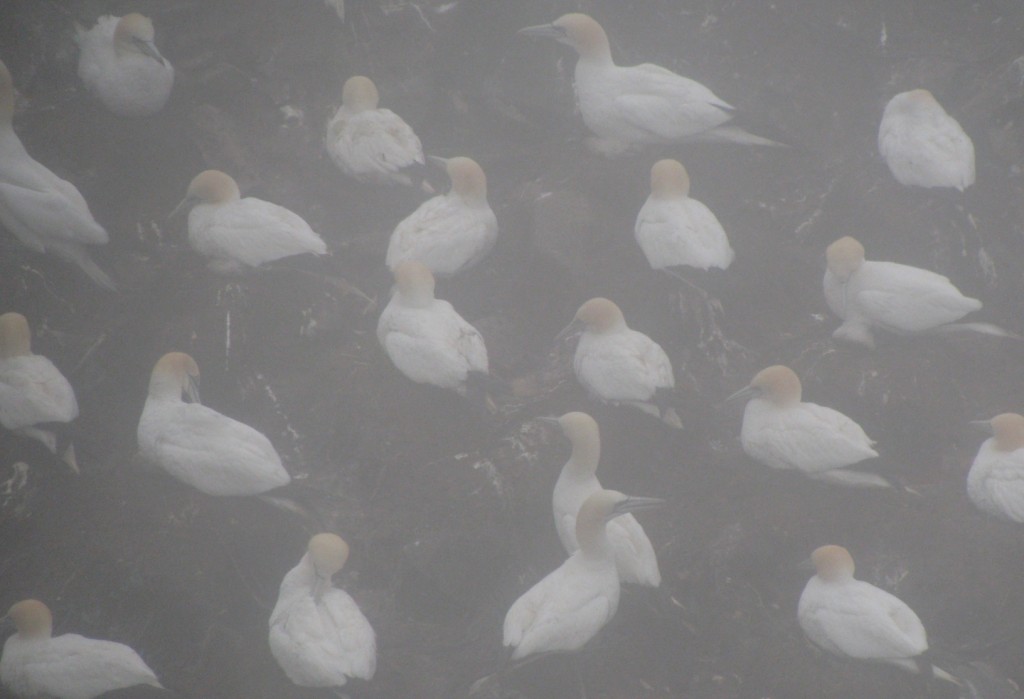