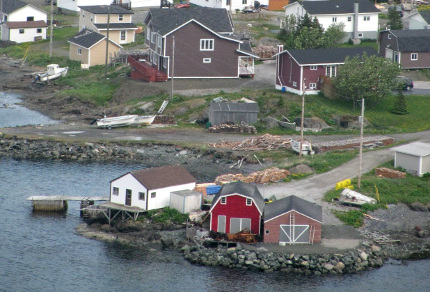 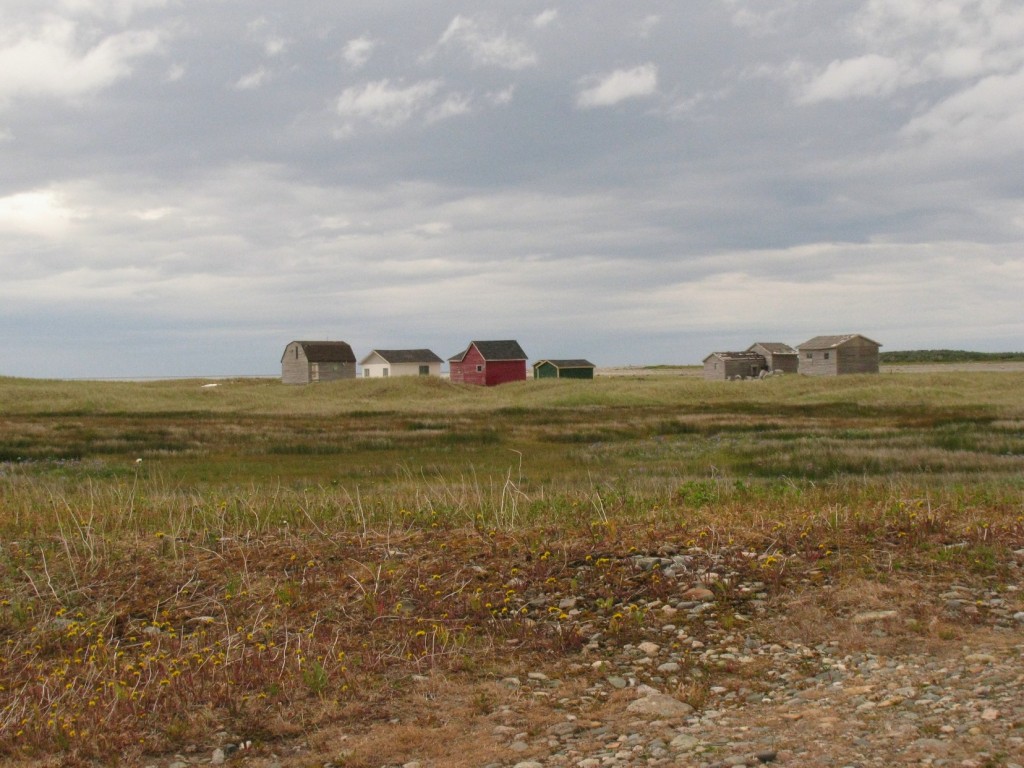 Newfoundland’s Northern Peninsula points northeast toward Greenland like the index finger of an otherwise clenched fist. Vilis and I spent three days exploring it at the end of last June, driving north through Gros Morne National Park and hugging the peninsula’s rocky western shore as far north as the highway goes (Eddie’s Cove), then crossing the fingertip east to St. Anthony before exploring the L’Anse aux Meadows National Historic Site at the peninsula’s northern tip. 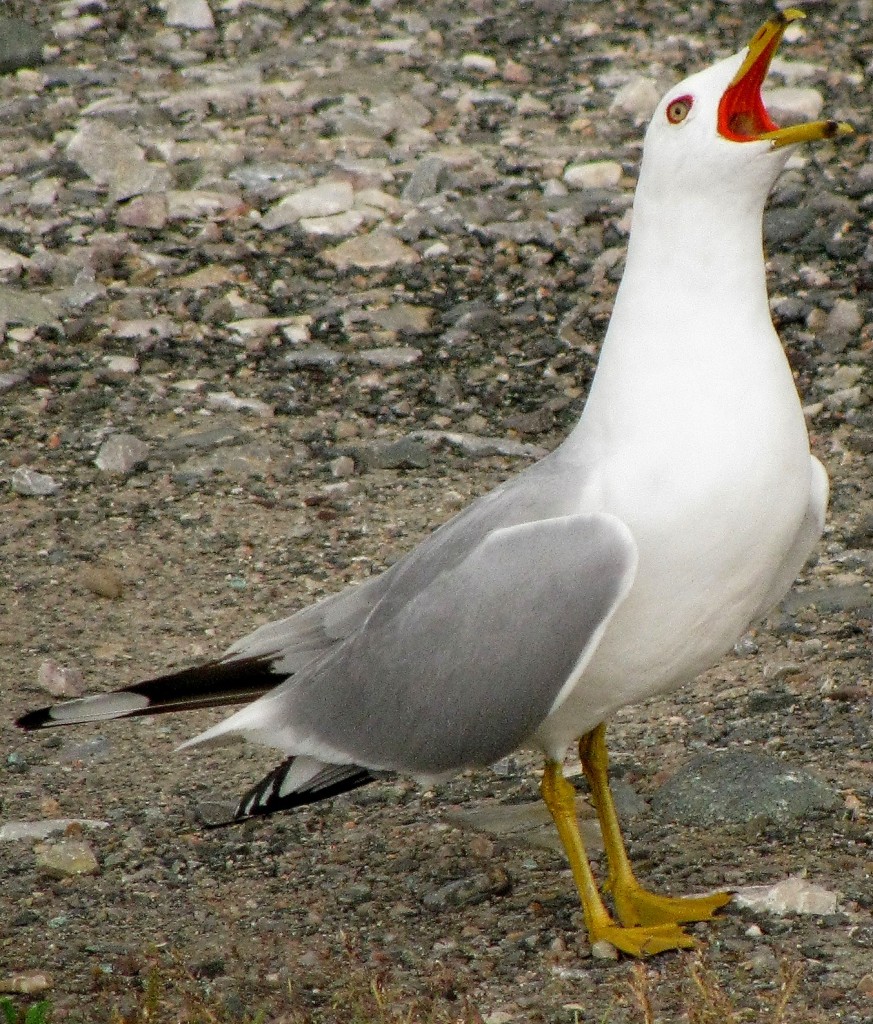 At St. Pauls, a coastal community surrounded by the northern reaches of Gros Morne National Park, we hiked to Tickle Point in search of birds on the sand-mud-pebble shore of St. Pauls Inlet, a vast estuary fed by several streams draining the park’s rolling uplands. Ring-billed and great black-backed gulls patrolled the flats, a killdeer skittered over the mud, and song and savannah sparrows sang from shrubs and grasslands.

While hiking out to the point, we passed Catholic and Anglican cemeteries, legacy of the French and English who established fishing villages on the Northern Peninsula. Wildflower meadows beckoned, and rolling swales of coastal grassland created a stark contrast to the national park’s brooding mountains behind us to the east. Killdeers and semi-palmated plovers treated us to broken-wing displays, and herring gulls and artic and common terns winged overhead. A rough-legged hawk flushed from rank grassland, and crows and ravens painted moving back silhouettes against the sky. 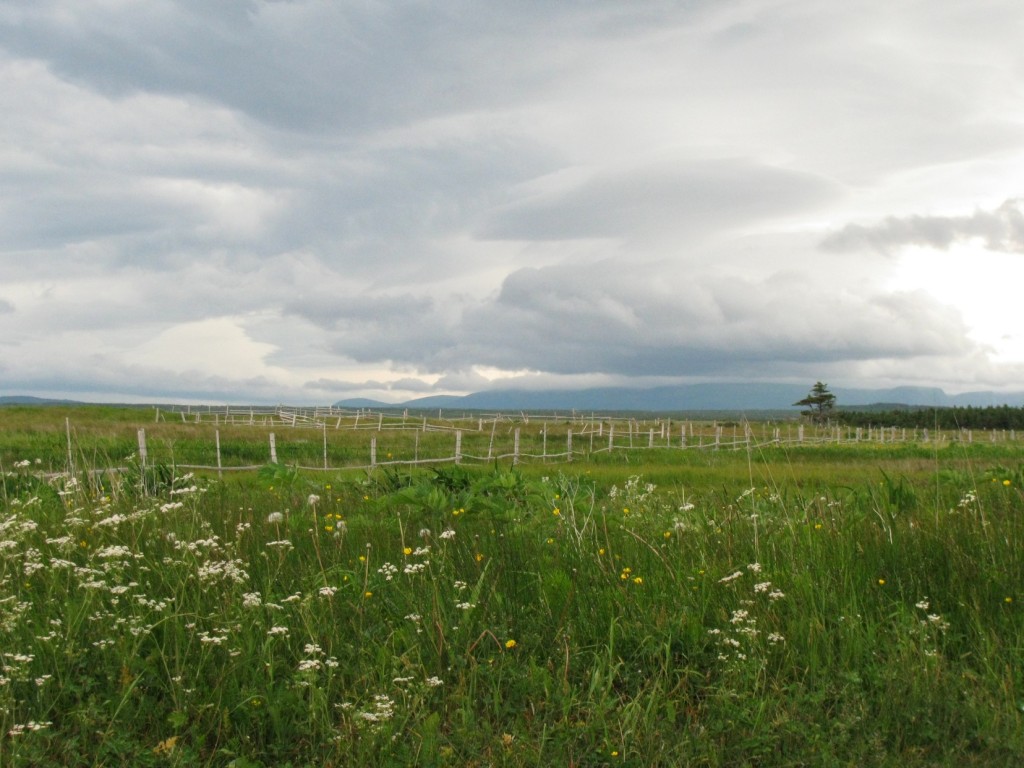 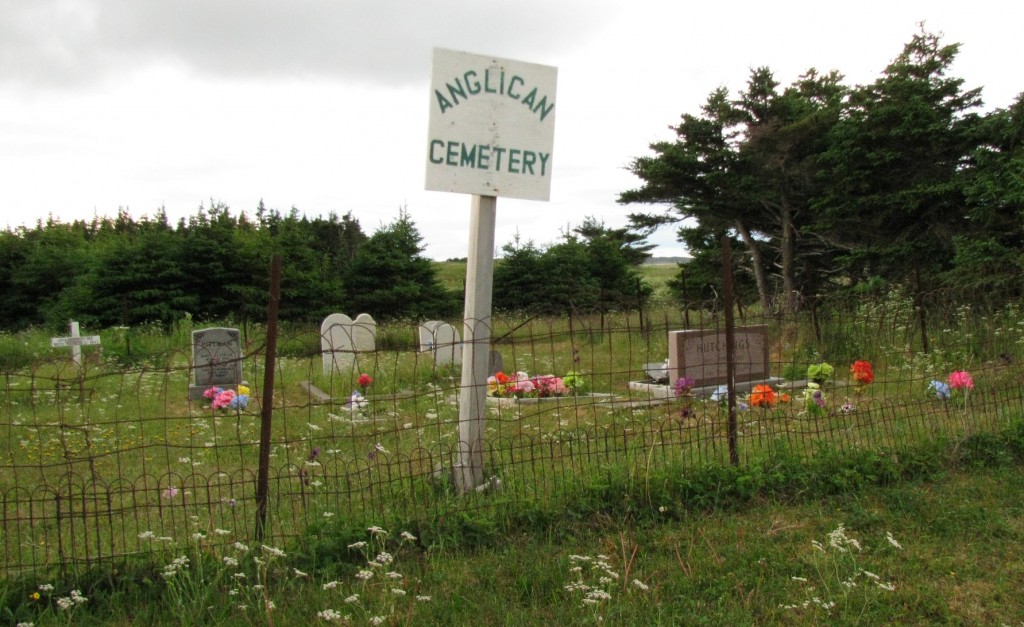 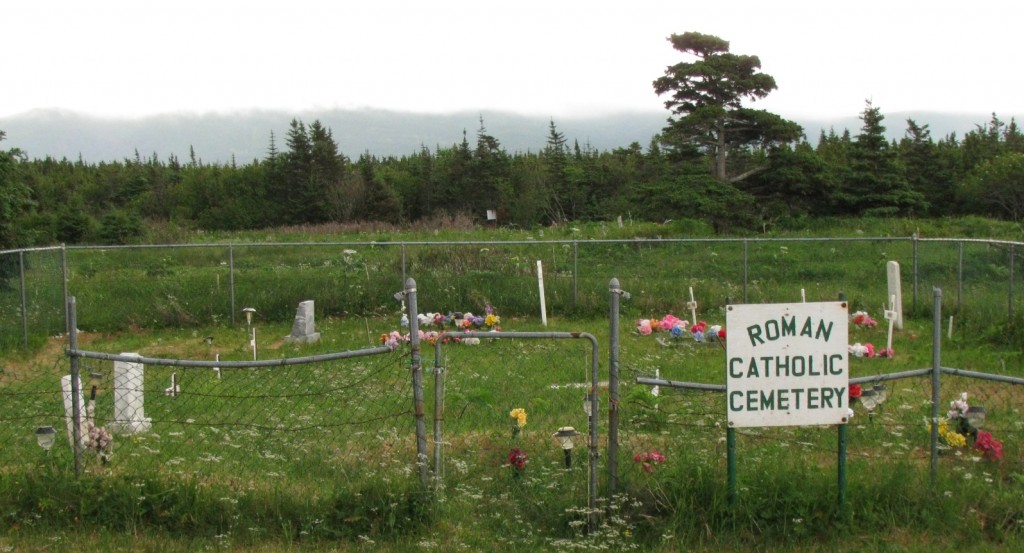 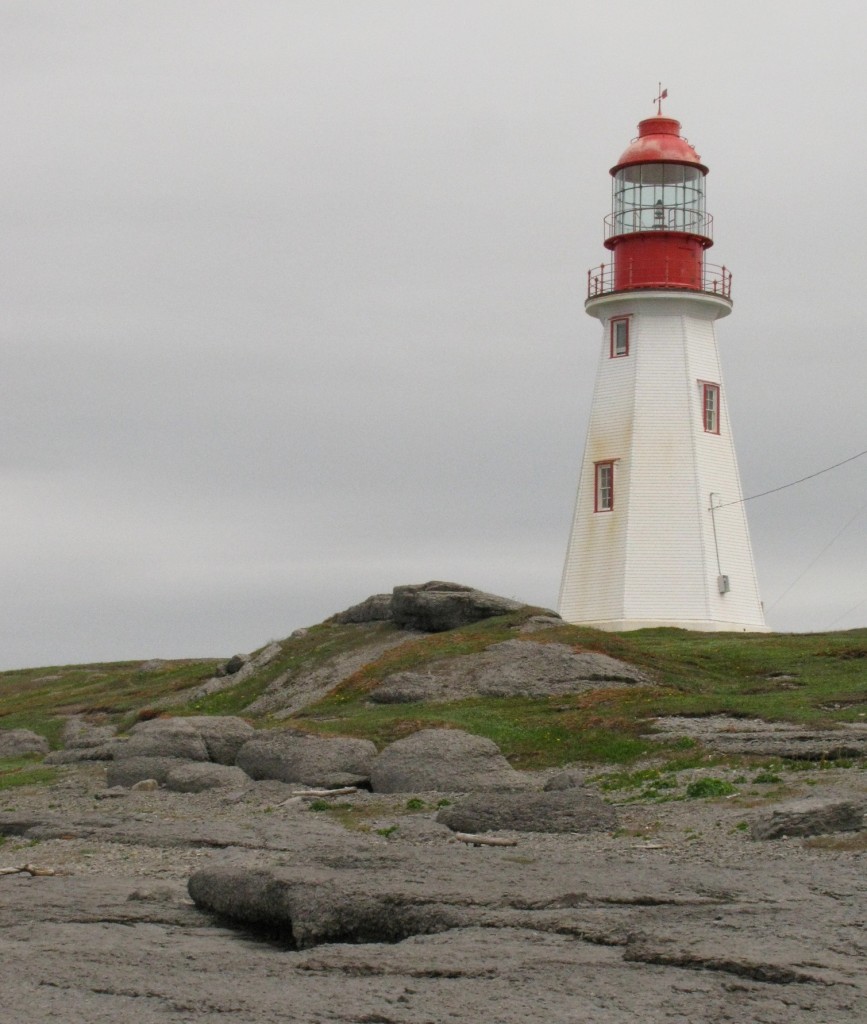 North of Gros Morne National Park, the coastal highway led us through barrens and past imposing rock formations at Arches Provincial Park and a string of fishing villages tucked into sheltering coves. At the Point Riche headland in Port au Choix National Historic Site, we spotted northern gannets and a half dozen minke whales fishing close to shore. As we drove north, the coastal villages were spaced closer and closer together, with the most northern ones only a few kilometres apart and directly opposite L’Anse au Loop on the Labrador shore twenty kilometres away across the Strait of Belle Isle. Fog filled the strait, so we caught no glimpse of Labrador, the other half of the Newfoundland and Labrador provincial pairing.

Beyond Eddie’s Cove, we headed northeast to St. Anthony, a regional centre and home to the Grenfell Mission Headquarters, a medical centre named for the medical missionary William Grenfell, who pioneered medical care for Newfoundland and Labrador residents. The town’s buildings hugged the curves of St. Anthony Harbour, clinging to rocky mounds and dips, reminding me of Channel-Port-aux-Basques in the province’s southwest corner, where the Marine Atlantic ferry from Nova Scotia had disgorged Vilis and me onto The Rock four days earlier. Chilled by cold wind off the open Atlantic, we hiked a headland trail through dense moors of stunted shrubs at Fishing Point, then checked into a motel. 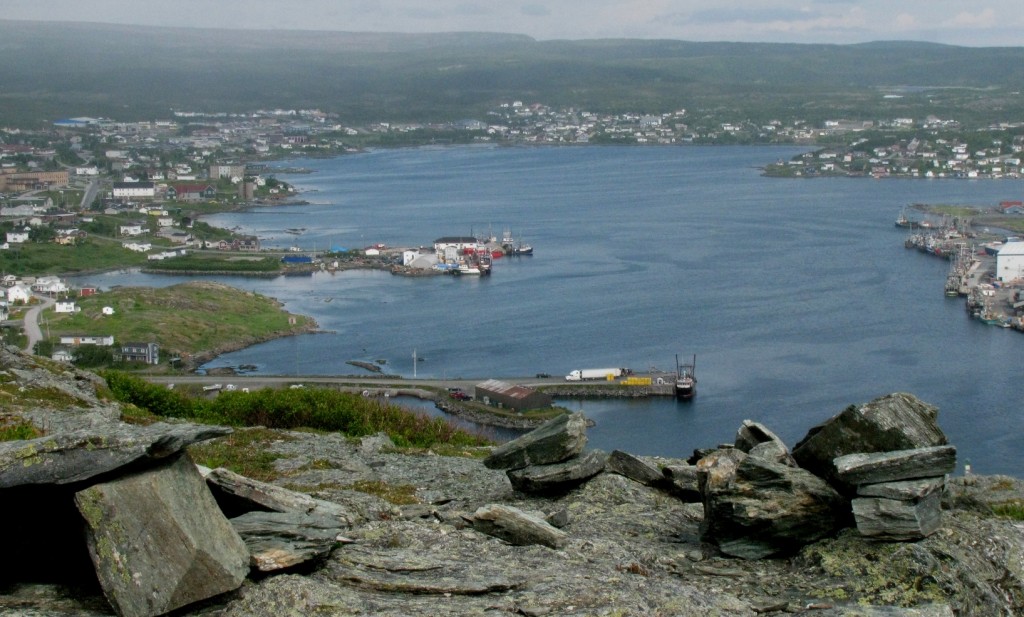 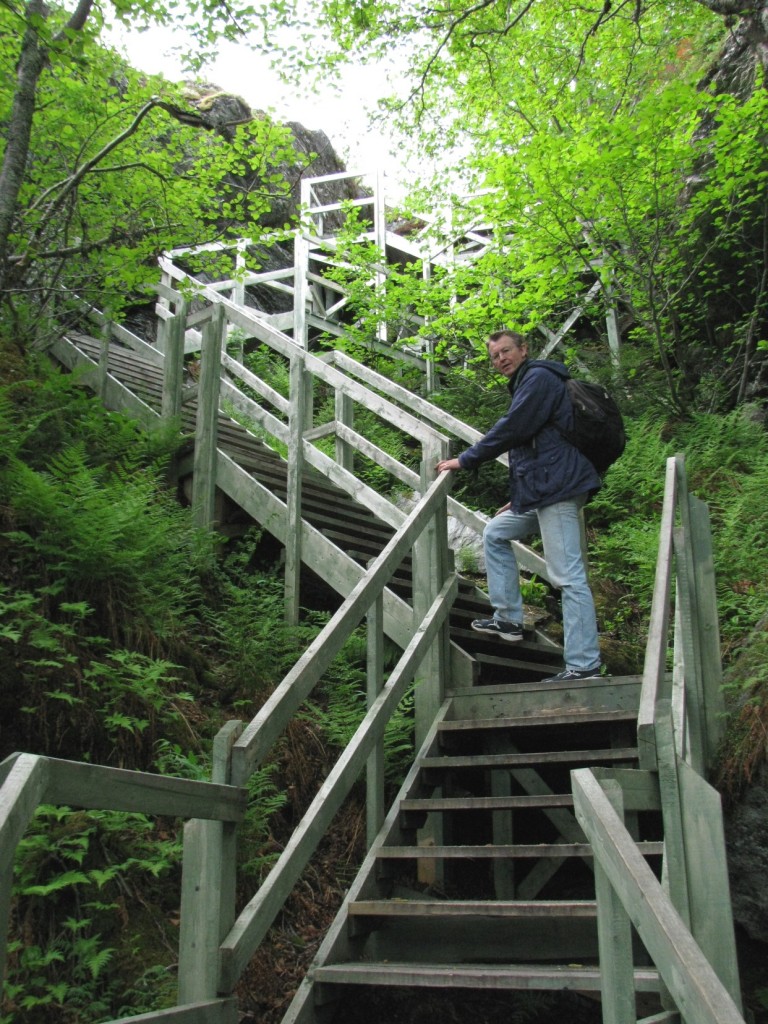 The next morning, we sampled a classic Newfoundland breakfast of baked beans, fried bologna, and slabs of fried bread called toutons, then worked off some of the heavy fare by walking more trails and climbing the Santana Trail’s 476 stairs to the summit of Fishing Point. Fractured rock, cushion plants, and spectacular views greeted us on the windy summit. We spotted an iceberg offshore, chilly evidence of St. Anthony’s subarctic climate. The stretch of ocean skirting Newfoundland’s north coast is known as Iceberg Alley, with icebergs floating down from Greenland common sightings in May and June. 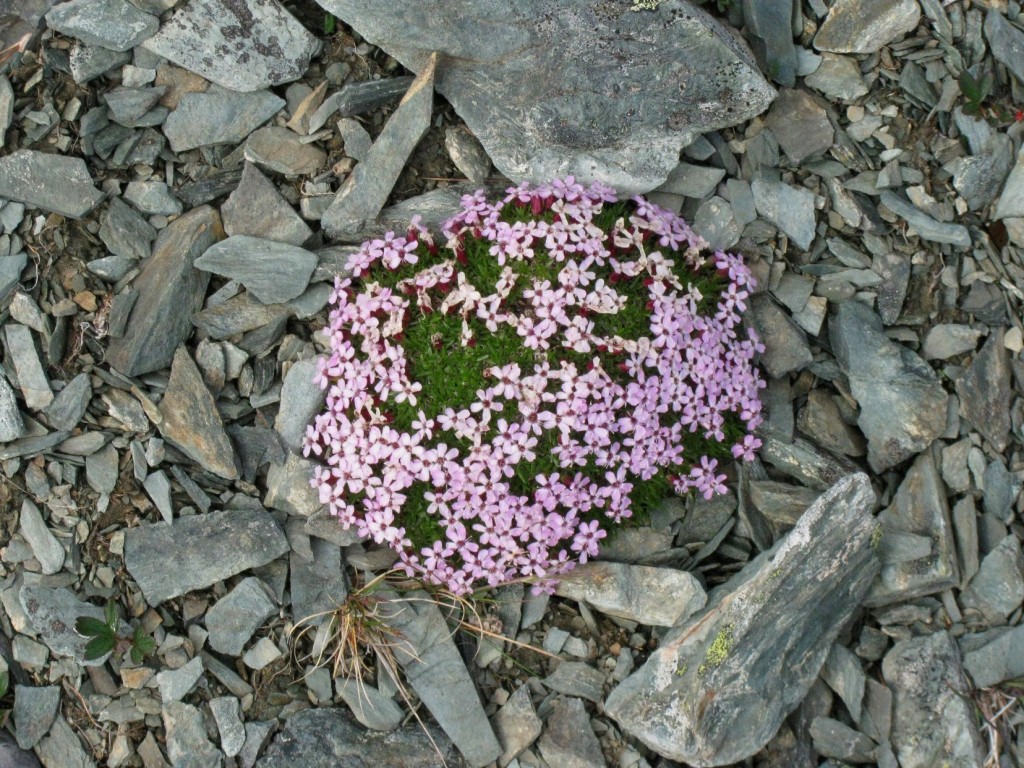 Dark cloud and fog to the west billowed in over St. Anthony, foretelling wet weather for our planned excursion to the thousand-year-old Viking settlement site at L’Anse aux Meadows at the Northern Peninsula’s northern tip. 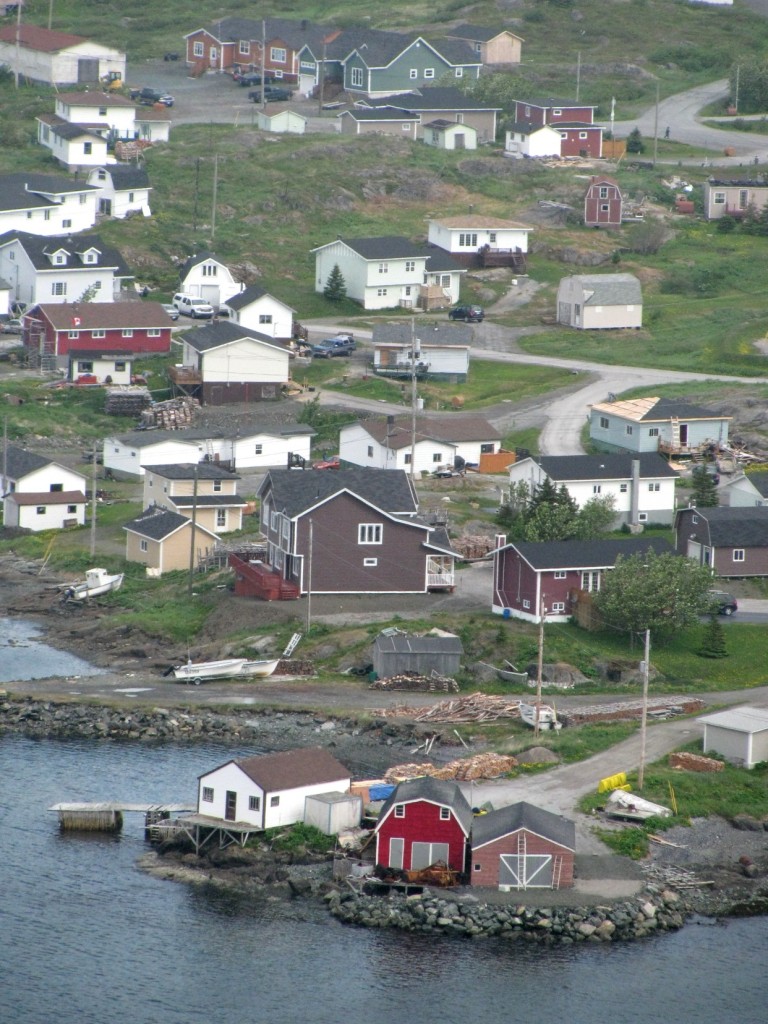 We descended the steep stairs and drove north to Hay Cove, where we booked into a hospitality home (Newfoundland bed and breakfast), then on to the national historic site. 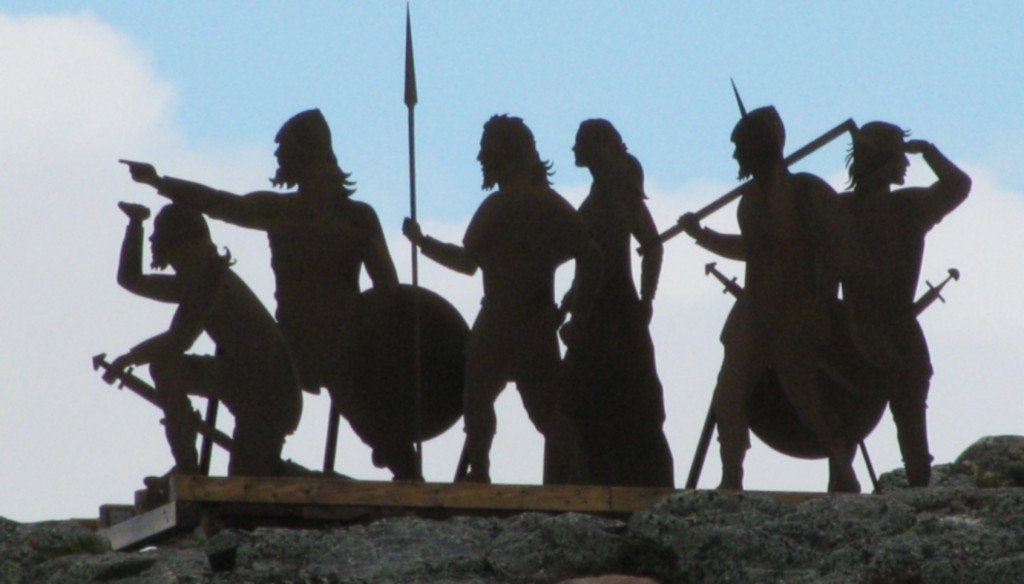 Steady rain accompanied us on our tour of L A’nse aux Meadows, where eight original buildings (four workshops, three houses, and a blacksmith shop) on the site of the first Vikiing settlement in North America (ca. 1000 A.D.) were visible as either reconstructions (three buildings) or outlines of mounds overgrown by grass. We ducked out of the rain into a reconstructed wood-and-sod chief’s house complete with tools, weapons, and costumed re-enactors. A local park interpreter explained that the Vikings had likely established the small collection of buildings as a temporary ship repair site or exploration outpost rather than a permanent  settlement. The archaeological site is recognized as the earliest evidence of European exploration in North America and is a UNESCO World Heritage Site. 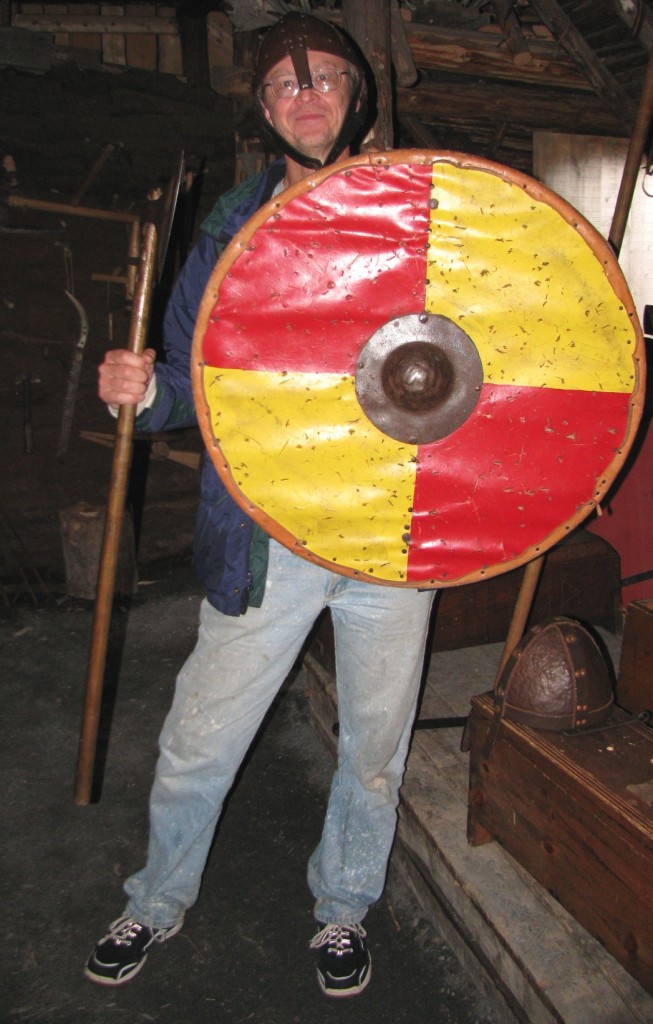 Vilis, whose Latvian ancestors may well have been Vikings, donned a Viking helmet, shield, and brandished an axe. 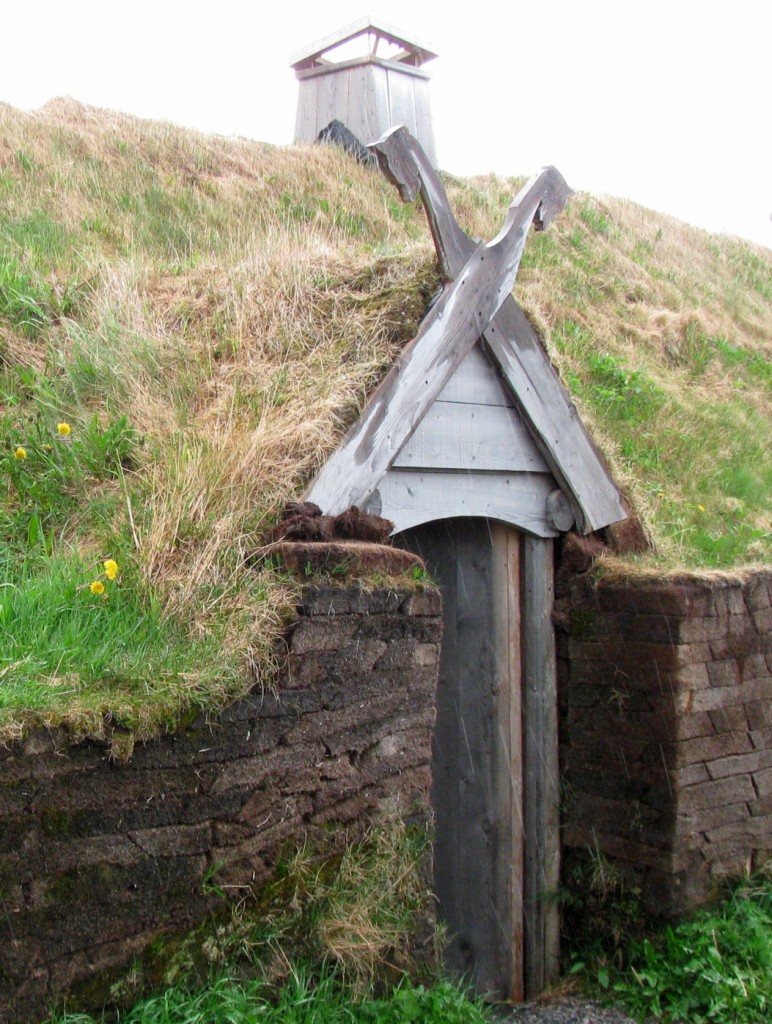 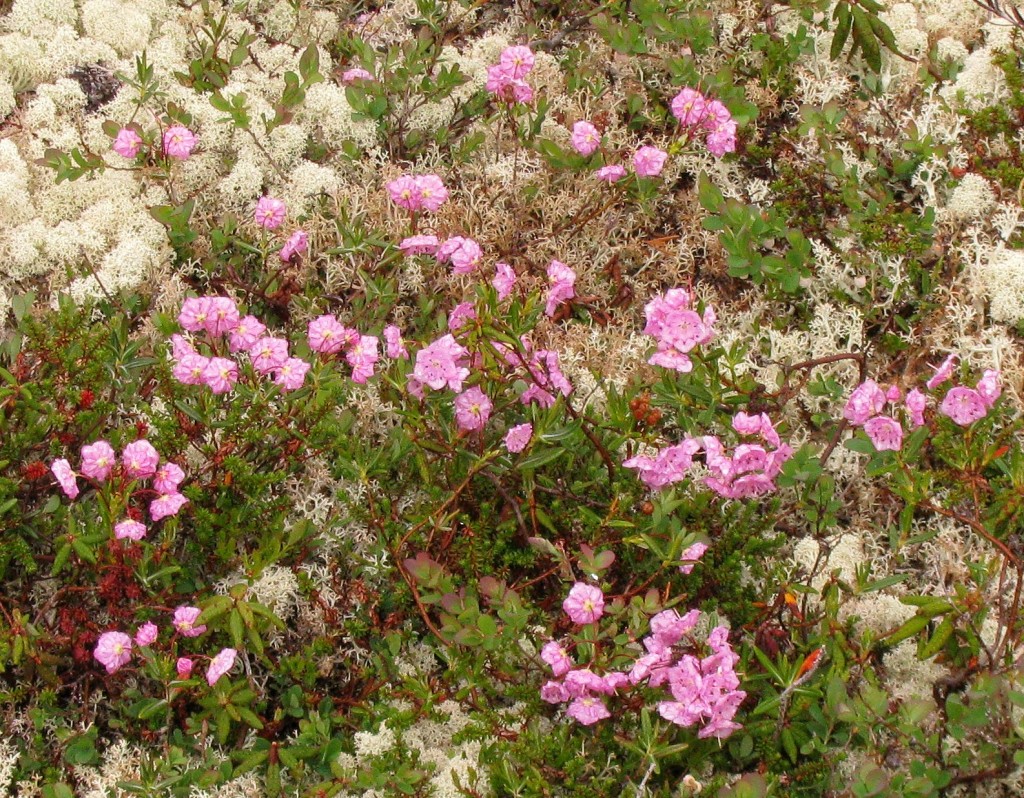 In late afternoon, the persistent rain relented enough for us to enjoy a hike through the barrens surrounding the historic site. I spotted white-crowned and swamp sparrows, and we heard the ‘go-back, go-back, go-backa-backa-backa’ vocalizations of willow ptarmigan and a fox’s sharp barks. Bog laurel, Labrador tea, bake-apple (cloudberry), and lichens grew intermixed with sphagnum mosses, creating pastel living tapestries at our feet. The rain clouds lifted enough for us to see Labrador to the west. 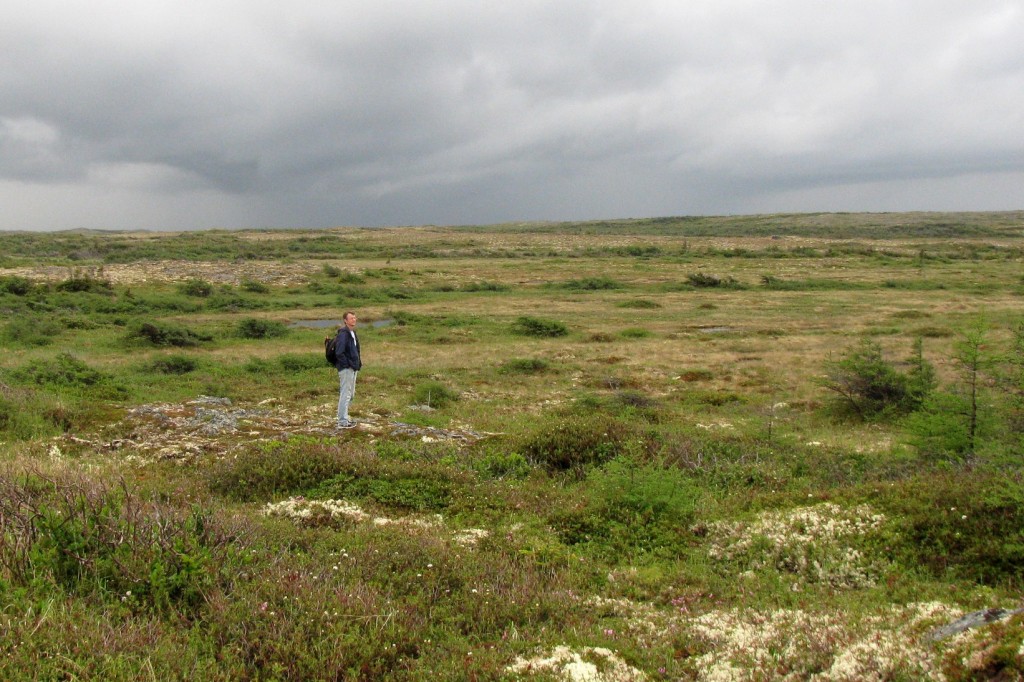 A supper of fish and chips followed by partridgeberry pie warmed us after the wet day, and I bought jars of bake-apple and partridgeberry jam to call up memories of Newfoundland when we’re back home in Nova Scotia.

The next morning, we breakfasted on cheese biscuits, eggs, bacon, and toast with delicious bake-apple, partridgeberry, and blueberry jams before heading out into the rain.

We slogged along Lacey’s Trail at Hay Cove, and I scored white-winged scoters, spotted sandpipers, and savannah sparrows. From a headland, Vilis and I watched a humpback whale fishing, the massive marine mammal submerging again and again and revealing its identity by flipping up its distinctive tail as it dived. Fishing boats chugged or rested on the cove , some motionless near traps supported by buoys.

At the hospitality house, we’d learned that the fishermen were trapping capelin and herring, also prey for humpbacks, which sometimes become entangled in the nets. One of the women serving breakfast said she’d had a hard time sleeping the night before we stayed at the home because the whales had been roaring so loud. She also said that a lot of hospitality homes opened in Newfoundland after the cod fishery crashed, as families attempted to earn an income. Her husband fishes in summer (although she said she thinks the Newfoundland fishery is dead) and works in western Canada in the winter. She splits her year, too, helping at the hospitality home in summer and cooking out West in winter.

Dispirited by the rain, we drove south from Newfoundland’s northern tip to Gros Morne National Park and camped out in preparation for climbing the ‘big alone,’ Gros Morne Mountain. (see previous post)