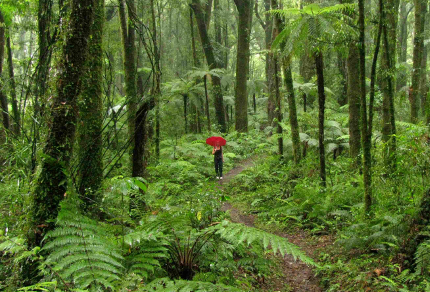 After a brief  morning soak in the hot pools at the Opal Hot Springs campground, Vilis and I travelled south from Matamata, our destination Owhango and the rainforest of the Ohinetonga Scenic Reserve. Ten years ago today, we and our sons Dainis and Janis arrived at Owhango, which served as our base for a month of research that required live-trapping and radio-collaring of stoats – a larger version of North America and Europe’s ermine or short-tailed weasel, Mustela erminea.

Stoats, which were introduced to New Zealand by European colonists, are Public Enemy No. 1 of native New Zealand birds, causing high mortality rates of juvenile brown kiwi – this country’s avian icon – as well as decimating populations of numerous other native birds. Before the arrival of humans on the islands that became Aotearoa and then New Zealand, no mammals existed here except for three species of bats, which likely arrived by flying from elsewhere. Thus, native New Zealand birds, many species of which were (and a few still are) flightless, were (and are) heavily hunted by introduced mammals, with catastrophic results. Humans hunted a dozen species of moa – including giant moa, the largest bird to ever have existed – to extinction. The disappearance of its flightless, walking food supply led to the extinction of the moa-hunting Haast’s eagle – the largest eagle that ever lived. The threat to kiwi, I’ve mentioned, and other birds or their eggs and young were and are hunted by not only stoats, but also by introduced rats, weasels, and brush-tailed possums, the possum being native to Australia but a havock-wreaking pest in New Zealand forests. At any rate, Vilis’s research was intended to aid New Zealand’s Landcare Research organization in its efforts to determine ways of exterminating stoats or drastically reducing their numbers. 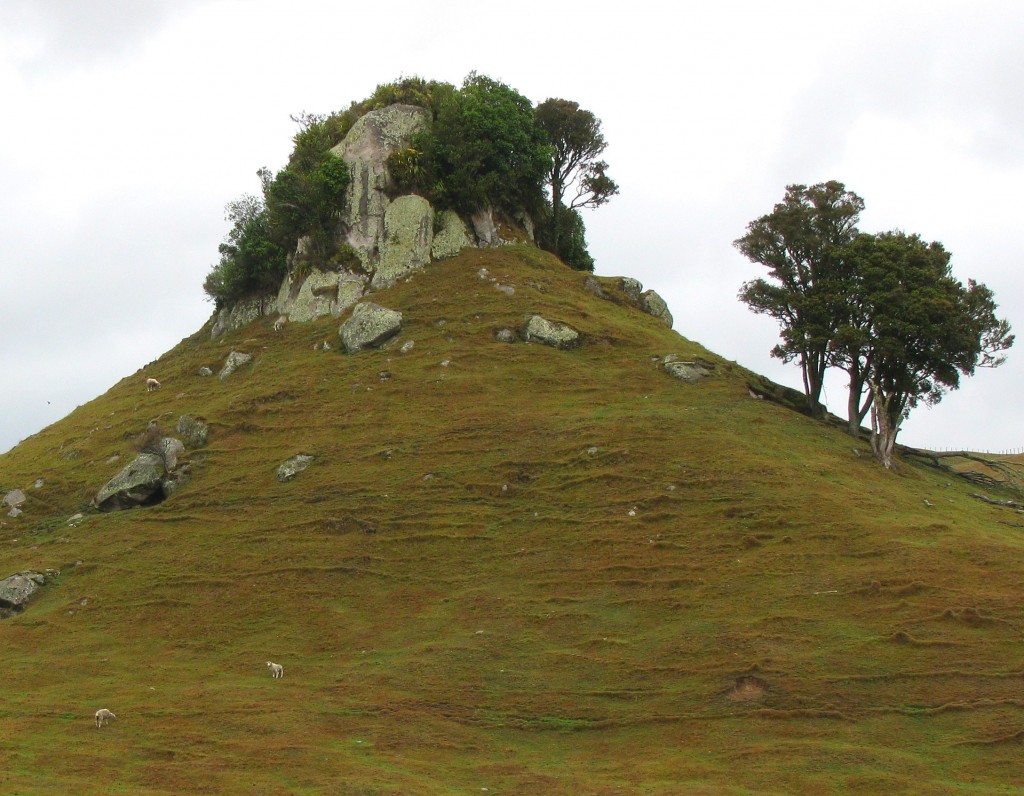 South of Matamata, we drove past more hilly dairy farms on land once forested, and then past corn fields and plantations of pine and gum trees, the regimented monocultures of the euphemistically-termed ‘exotic forests’ replacing native forests plundered for timber and cleared for agriculture in the 19th and 20th centuries. Past Whakamaru, we again entered into open, terraced rangeland, with steep peaks shrouded in cloud and rain. Near Tihoi, sheep grazed on lumpy hills mottled with angled, jutting boulders and bald outcrops of pale rock, small hodgepodges of native New Zealand forest vegetation tufting the landscape. 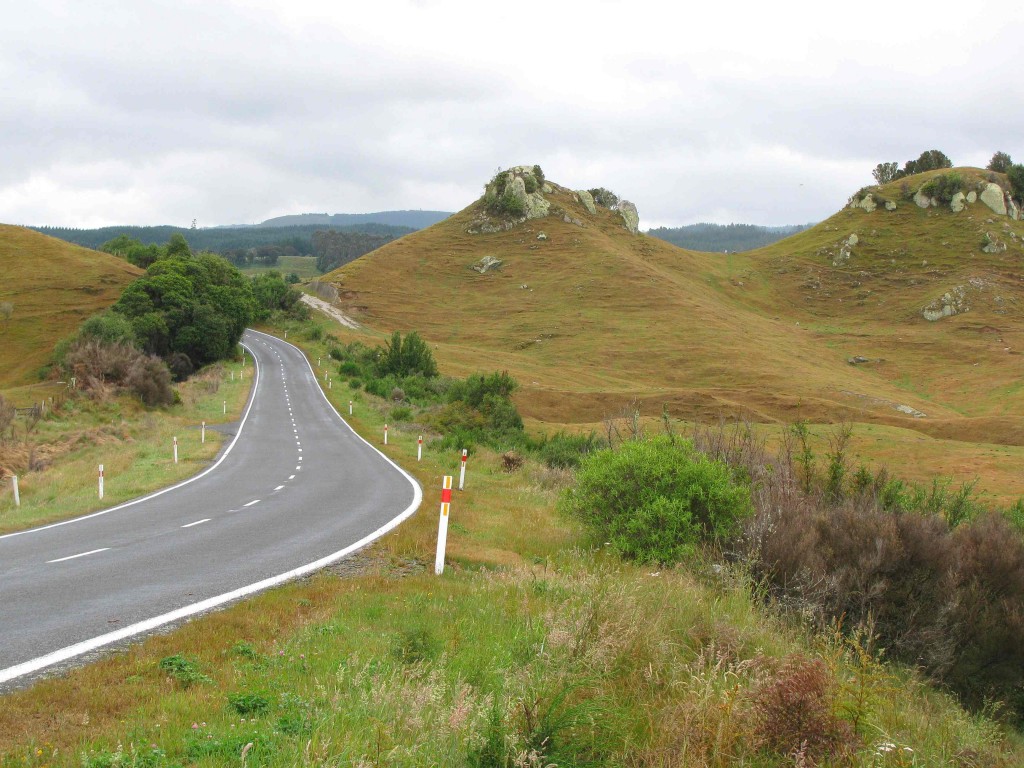 Near Taumarunui, hills dotted with spreading trees stretched in overlapping ranges to the horizon, patches of scrub on their peaks and dark green pine plantations cloaking far slopes. Beef cattle, sheep, and red deer grazed in paddocks, and rimu trees hung lacy, weeping branches. The view from Piriaka Lookout was rain-drenched pastures and rich, dark trees bordering the rapids of the Whanganui River. 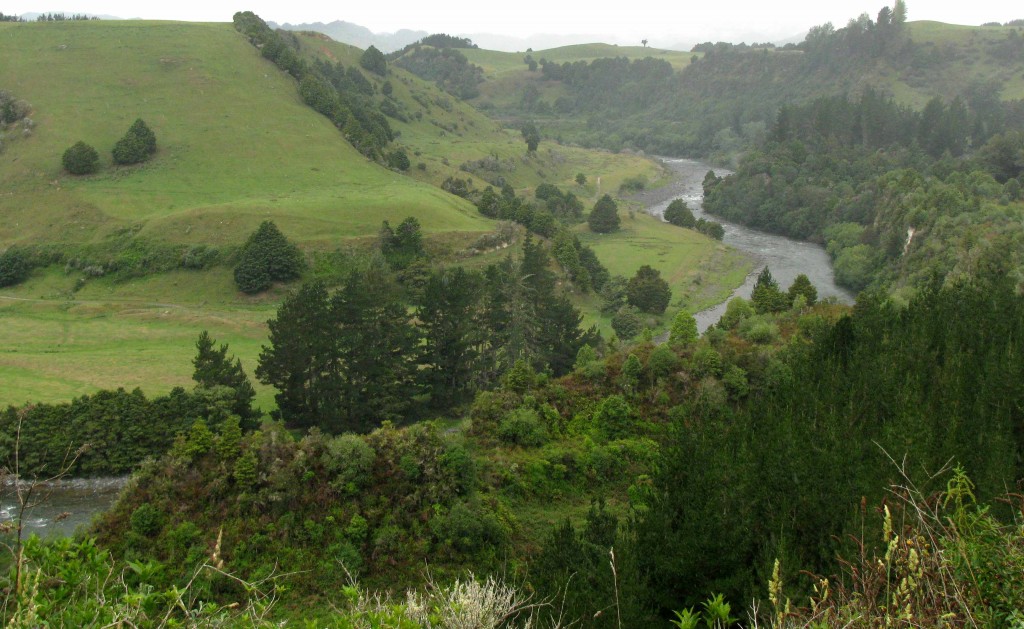 In Taumarunui, we walked down memory lane, past the Regent, a musty theatre where we had watched Space Cowboys with our sons and ten other movie-goers who had straggled into the theatre, past the library that had provided us with library cards so we could indulge our family penchant for reading, past Honda First, where Vilis had rented a Yamaha quad for his research, and into the bakery on the main drag, where we indulged our sweet teeth on pastries, as we had a decade ago. Then we drove 20 kilometres south to Owhango and the Ohinetonga Scenic Reserve, a stand of protected old growth subtropical rainforest. 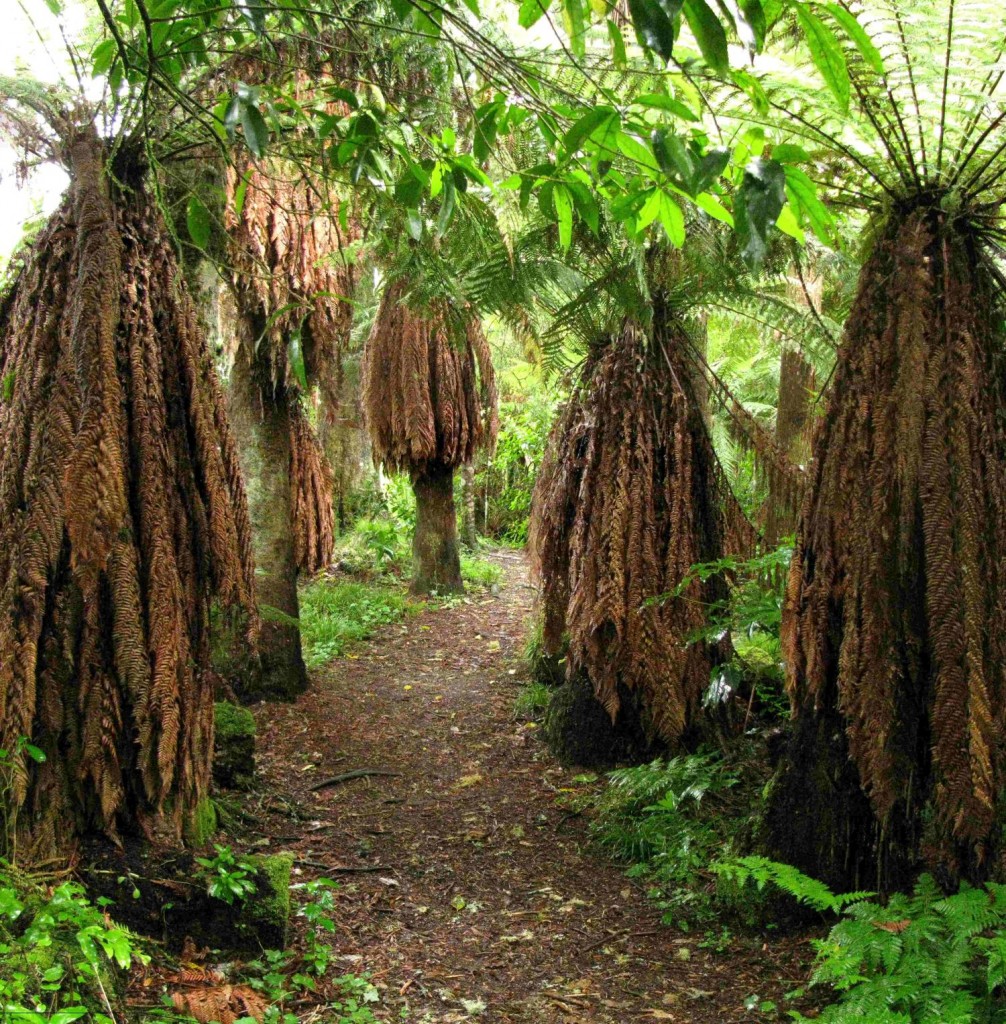 Within the forest, the Ohinetonga Loop Track led us among soaring giants – lance-leaved tawa, thick-trunked rimu with its weeping branches, flat-needled miro. Tree ferns with skirts of dead growth lifted graceful umbrellas of verdant fronds, while stiff, curving fronds flared out from bracken ferns. Mosses coated the trunks of trees that sprouted hound’s tongue and filmy ferns and others slowly swimming up out of the recesses of my memory. All was lush, green, and magnificent, the trail leading us onto a boardwalk over a lagoon like a hidden gem within the forest. “It’s so beautiful, it hurts,” Vilis murmured, and I recalled that ten years ago, we didn’t want to leave it, that we were aimless after returning to Lincoln (our South Island home town), our eyes looking beyond the walled rose gardens and hedged pastures, still seeing this forest. 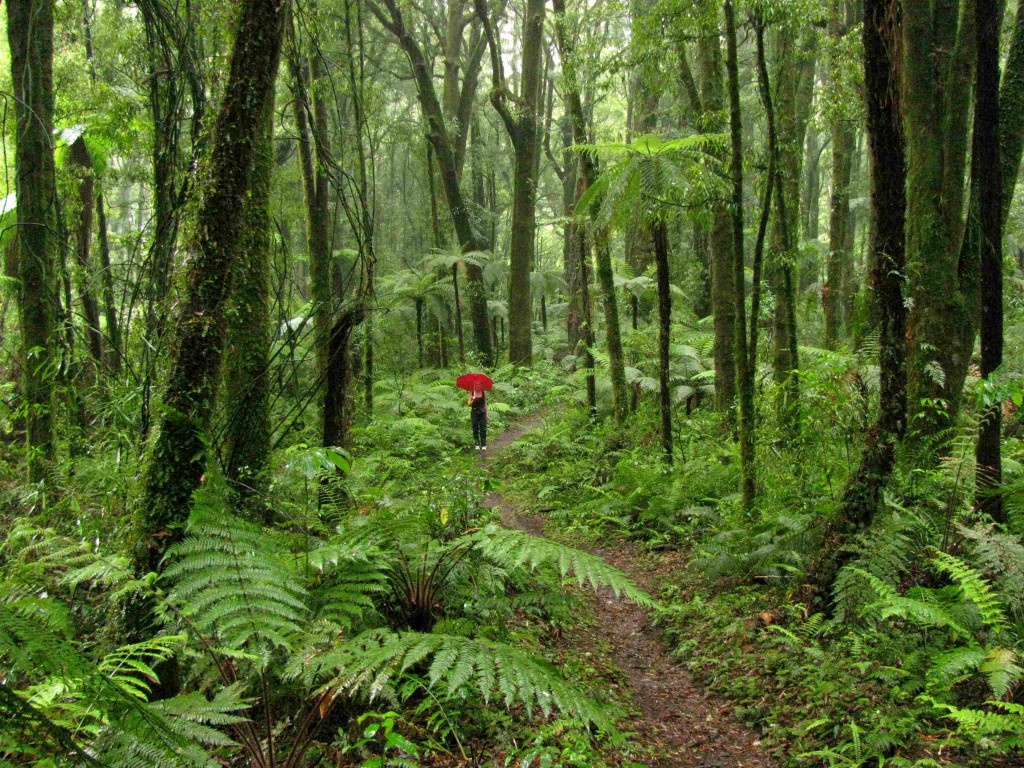 Here I am in Ohinetonga Scenic Reserve, Owhango (© Vilis Nams) 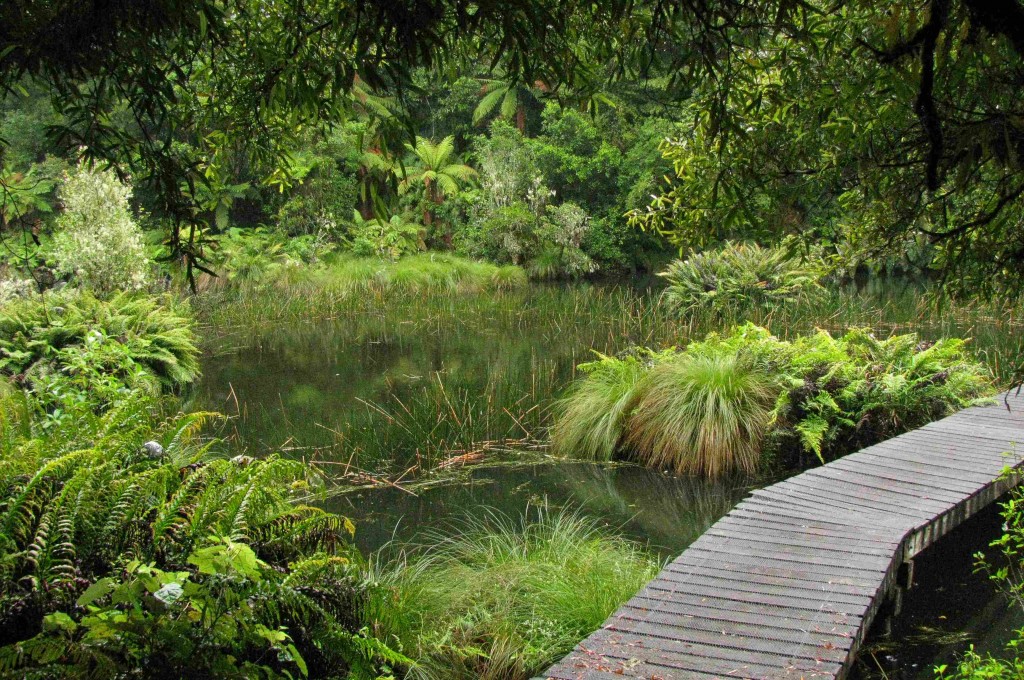 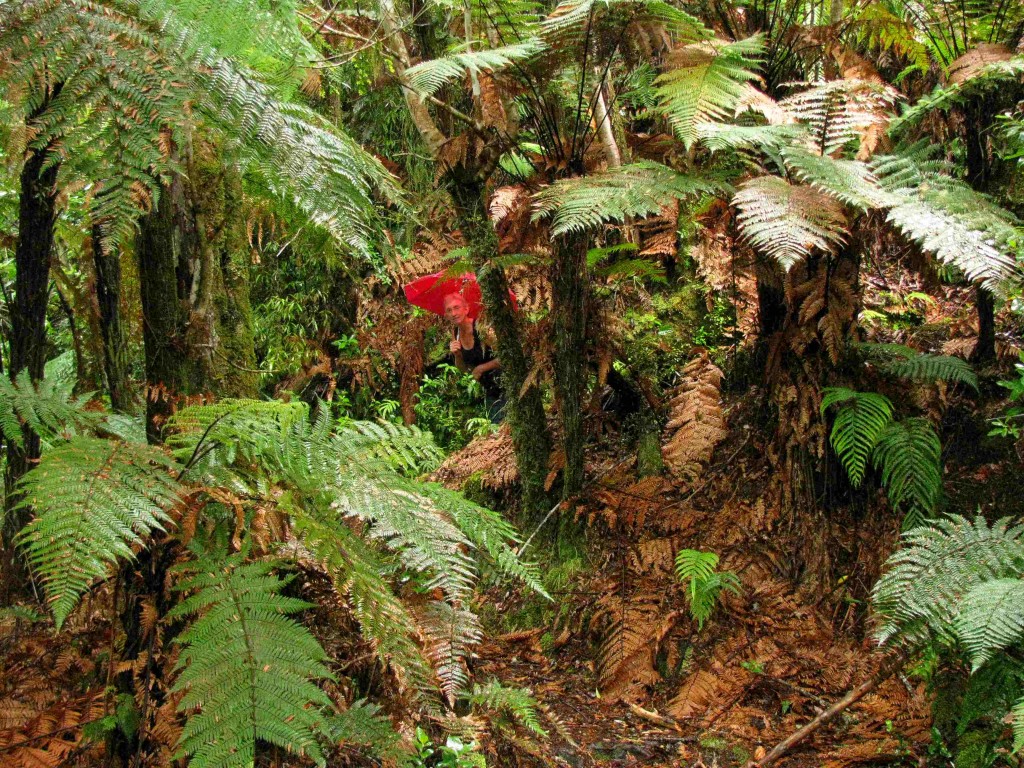 Here I am among Tree Ferns in Ohinetonga Scenic Reserve, Owhango (© Vilis Nams)