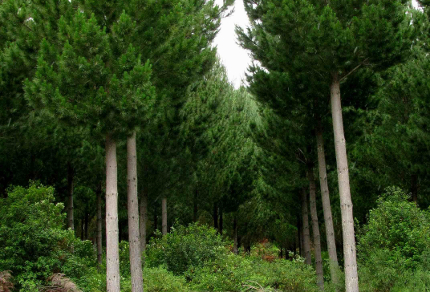 In mid-morning, little shags perched on boulders protruding from the near-shore waters of Lake Taupo, their wings stretched to dry in the damp air filled with spitting rain, their slender, curved-tip bills lifted to the sky. Vilis and I walked north along the shore through the open greens of the Motutere Bay Holiday Park, empty now, but which will, according to the park receptionist, be filled with Christmas holiday vacationers beginning this coming week. 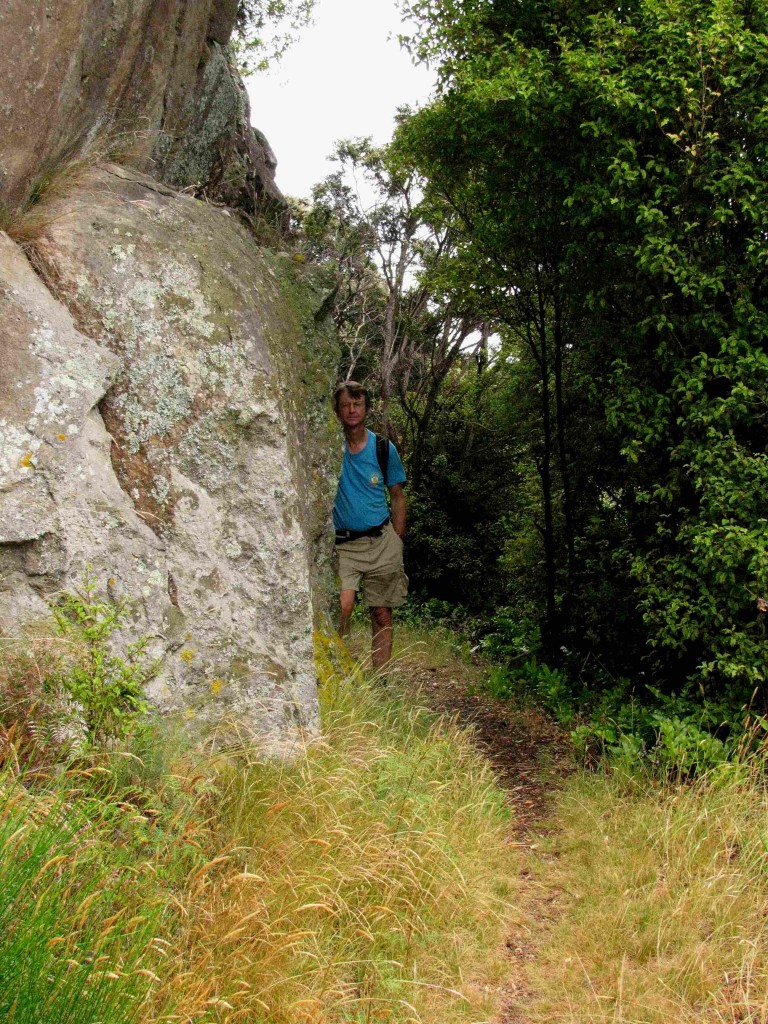 Leaving the lake, we crossed SH48 and tramped the 3-kilometre return Waipehi Walk within the Motutere Scenic Reserve. Slick with wet leaves, the track climbed steeply through scrub onto the spine of a narrow ridge offering far-ranging views out over the vastness of Lake Taupo. Fantails flirted with us, and bees seeking nectar plundered clusters of small, white tea tree flowers. The track curled down through dense shrubs and ferns spiked by ragged-barked kānuka trees, and then followed the side of the ridge. We tramped past towering moss- and lichen-covered granite walls and over a creek shrouded by thick vegetation among which a tree fuschia lit the dimness with its tattered and peeling orange bark. Small songbirds called whiteheads and more fantails – one with a chest of deep cinnamon (NZ fannies appear to have more variable colour and greater curiosity than Australian grey fantails, which are the same species) – responded to my ‘psshh-psshh’ entreaties, seeming to almost parade themselves before us. 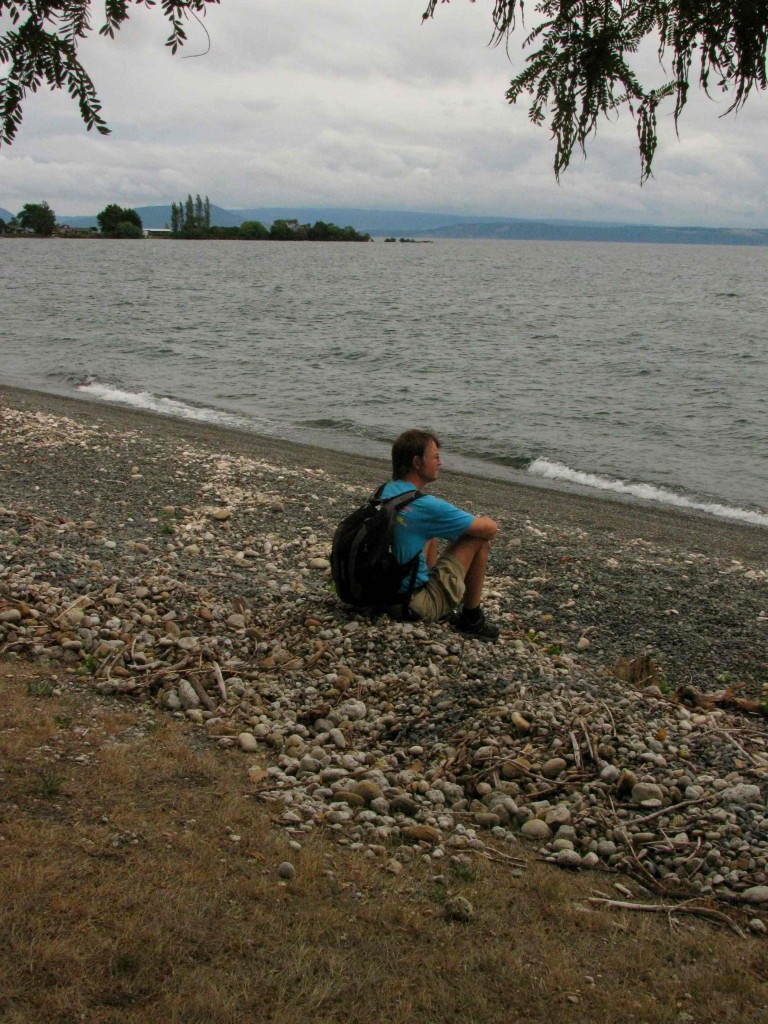 On our return to the lakeshore, a New Zealand wood pigeon – big and plump, with iridescent head, back, and breast feathers – blasted past us, and welcome swallows and introduced house sparrows and blackbirds flitted over the holiday park grounds. Waves shoved by brisk winds poured onto the pebble beach that showed the height of storm surges by a storm-piled row of lightweight, pale pumice stones intermixed with dark grey ‘heavy’ stones, the lot resembling beach debris deposited by ocean tides.

After lunch and a grocery run to Turangi, during which we spotted a white-faced heron, white-backed Australian magpie, and Australasian harrier, we tramped up old logging roads behind the holiday park, climbing to yet another ridge spine and following it into tree plantation country. Pumice gravel crunched softly beneath our feet, mist floated beside us, and densely-needled, emerald-green branches of young plantation pines tossed and swayed in a wild wind on high. Rain pelted down. We observed a brood of California quail chicks attempting to follow their parent up a steep bank, and hiked past exotic, fast-growing firs and pines planted on impossibly steep slopes, some blocks of conifers towering over us, other trees mere youngsters wide-spaced on open, clear-cut land from which a pheasant rasped out its bold, scratchy call. 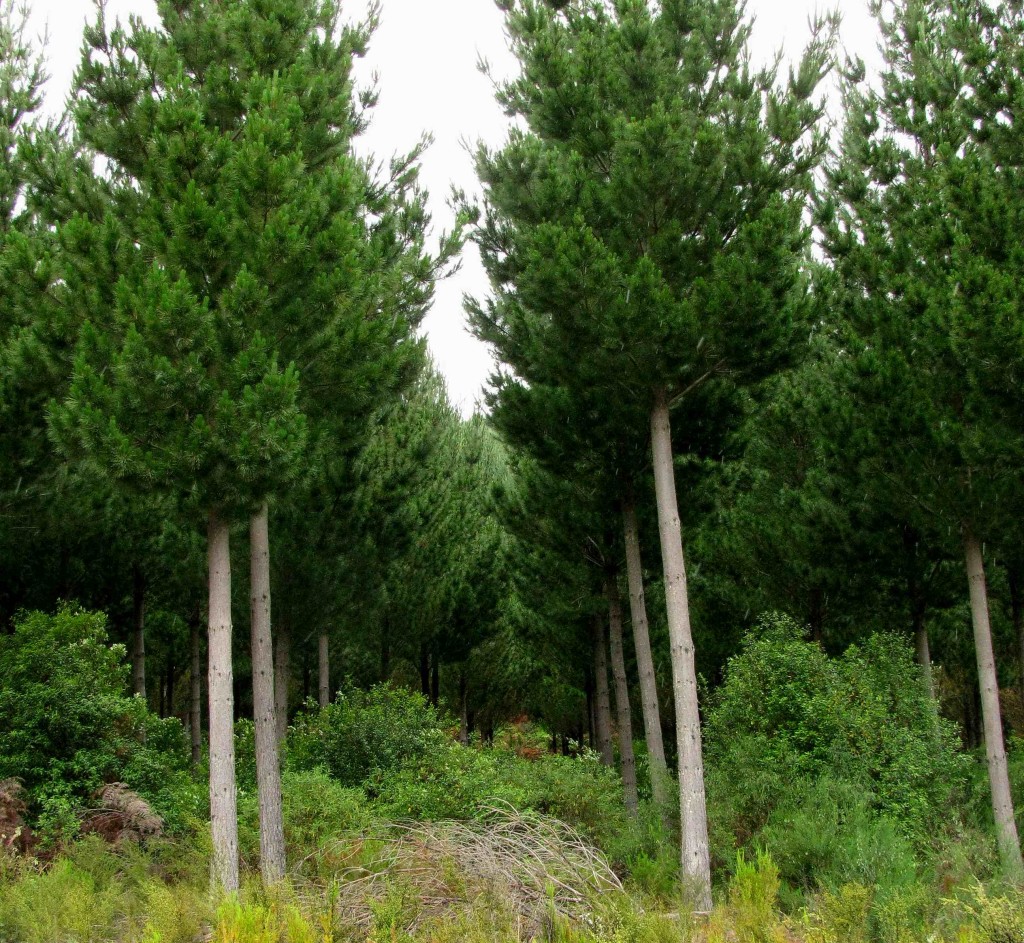 The plantations stretched to the horizon, their regimented monocultures so at odds with the lush, tangled diversity of the rainforests of the Ohinetonga Scenic Reserve and Lake Rotopounamu through which we tramped yesterday and the day before. “You know, walking up here, you can really see how New Zealand is a green ravaged land,” Vilis commented.  I concurred, and as we descended the same rollercoaster, pumice-surfaced incline we’d climbed to the logging road, rain poured down onto us and screened the far reaches of Lake Taupo.