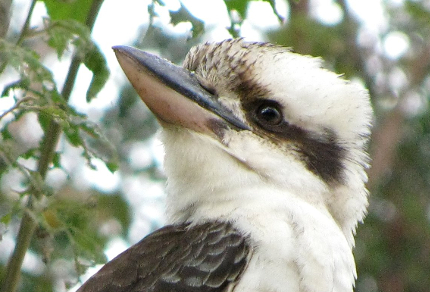 An Aussie icon, the laughing kookaburra greets the dawn with maniacal chortles and flies ritualized trapeze flights to defend its home group’s territory.

This week’s featured bird is the laughing kookaburra, Dacelo novaeguineae. This species of kookabura occurs only in Australia, where it inhabits non-arid habitats in the eastern mainland from Cape York Peninsula to the south coast. The laughing kookaburra is also an introduced species in southwest Western Australia and Tasmania.1 In Tassie, it’s considered vermin.2 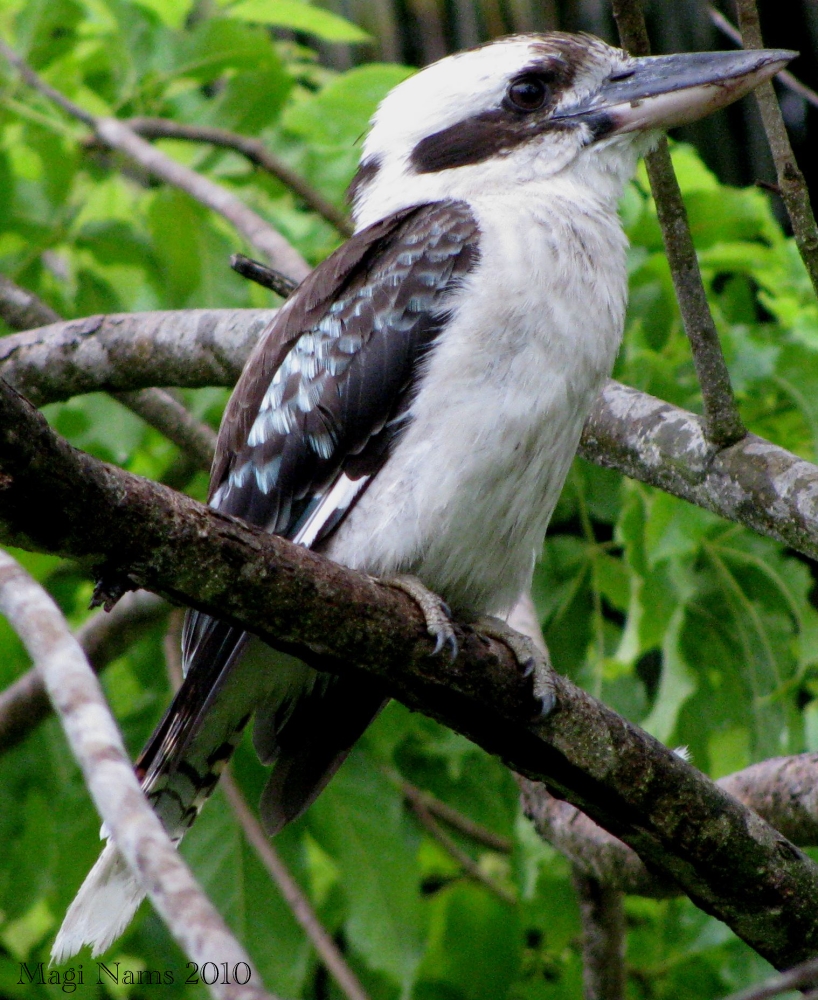 Laughing kookaburras look like big, brown-and-white kingfishers with a mottling of pale blue feathers on their wings. All four of the world’s kookaburra species (the others being the blue-winged kookaburra, rufous-bellied kookaburra and spangled kookaburra) belong to the avian family Halcyonidae.3 This seems a bit of a contradiction considering the meaning of the word halcyon and the far-from-halcyon atmosphere created by kookaburras’ vocalizations. These birds greet dawn’s coming with high-amplitude “koo-koo-koo-ha-ha-ha-ha!” calls and maniacal chortles and guffaws that are territorial proclamations.4

Kookaburras maintain permanent group territories and defend them not only with their wild, quintessentially Australian dawn chorus, but also with ritualized circular flights across territorial border lines and with trapeze-like, gliding displays to and from trees.5 During the weeks leading up to egg-laying time, kookaburras apparently put on quite a mating show, with even more raucous calling and aggressive territorial defensive maneuvers.6 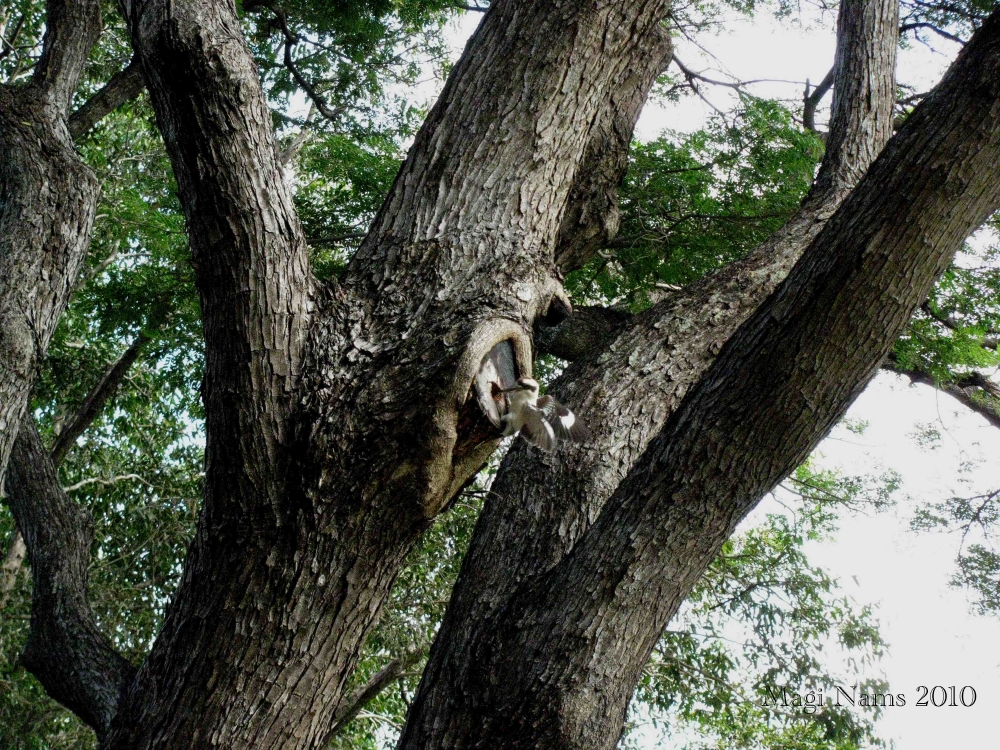 One morning while birding in Anderson Park Botanical Gardens in Townsville, Queensland, I observed two laughing kookaburras repeatedly swooping in curving flight between a rain tree’s outer branches and a particular spot on one of the tree’s several massive trunks. When I studied the birds’ movements carefully, I noted that each kookaburra flew from a branch to the trunk, grabbed onto the base of a severed branch’s stump with its feet, rapped at the centre of the stump with its hefty beak and then kicked off and glided back to its perch on the branch. After one bird completed the sequence of actions, the second bird performed the same sequence. A few times, both birds were in the air at the same time, one following quickly on the tail of the other to create a double-whammy performance with a pass-by in flight.

These flights were the territorial displays called trapeze flights that I’d read about in Sarah Legge’s book Kookaburra: King of the Bush. They’re called trapeze flights because the birds swoop past each other in opposite directions, like trapeze artists performing under The Big Top. Along with the kookaburra’s loud, maniacal vocalizations, trapeze flights and another ritualized display called a circular flight display are the kookaburra’s means of announcing and defending the borders of its family group’s home territory. The two birds I observed would have belonged to the same group. Had I remained longer, I might have observed trapeze flights performed by members of another laughing kookaburra group claiming the adjacent territory. 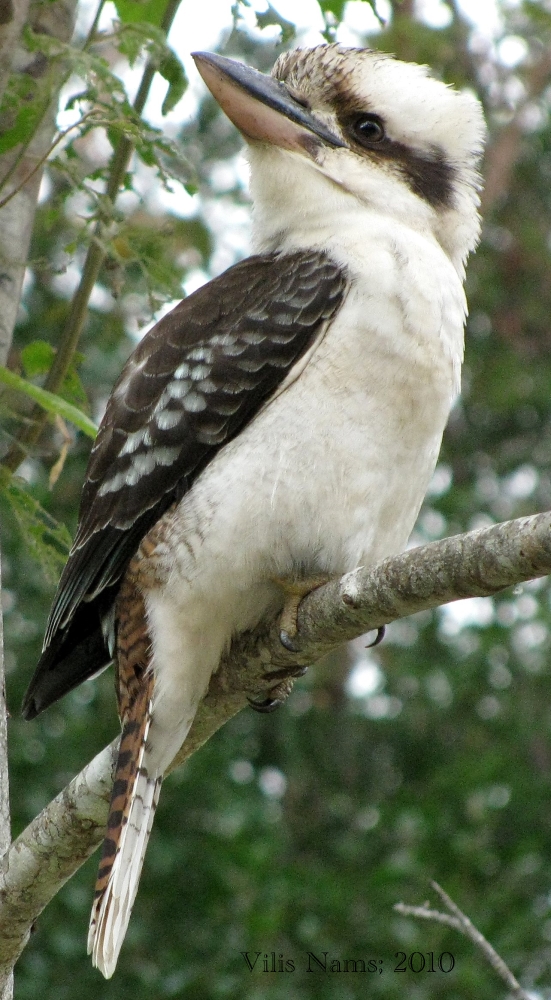 Kookaburras hunt from a perch, where they sit and wait until they spot a prey item, usually on the ground below.7 They feed on a wide variety of prey items, mostly insects, other arthropods and small skinks. They also take snakes (for which they’re somewhat undeservedly famous), frogs (I watched one bashing a frog against the ground to kill it), crustaceans and worms – even the two-metre giant Gippsland earthworm of South Australia.8

Kookaburras typically nest in tree hollows and are what scientists call “cooperative breeders.” Groups of kookaburras include “helpers” that assist in caring for the dominant pair’s young. Laughing kookaburras are strictly monogamous, with the dominant pair maintaining a faithful pair bond.9 During the spring months, breeding females lay their eggs, usually three. The eggs require about three and a half weeks of incubation before hatching. After hatching, young kookaburras require another three months of parental care and attention before they can fend for themselves.10

For Australia’s Aboriginal peoples, the vocalizations of kookaburras play prominent roles in Creation stories. Kookaburra was commissioned by the spirits to alert all the animals to the sun’s rising by calling out each morning. Other stories tell of Kookaburra mocking fellow creatures by laughing at their misfortunes.11

Like Australia’s indigenous peoples, European settlers instilled kookaburras into their lives and lore, naming them “Bushman’s Clock” or “Alarm Bird” and incorporating them into songs, poems and storybooks for children.12 Marketers used images of the popular birds to promote products ranging from cigarette paper tubes to knitting needles.13 Australia’s military adopted the kookaburra as an emblem on naval, air force and army insignia and named the ship HMAS Kookaburra after the big-headed, chisel-beaked bird.14 Like the kangaroo, koala and platypus, the laughing kookaburra has become an Australian animal known throughout the world. It’s celebrated in the old “Kookaburra” song I learned as a child in Canada.