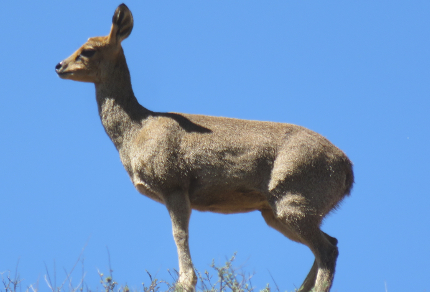 The ballerina of antelopes, the klipspringer bounds up rocky slopes on the tips of its hoofs and blows loud, buzzy alarm whistles as warning signals.

My first “mammal of the month” is the klipspringer, a small, sturdy antelope that inhabits rocky terrain with sparse vegetation in eastern and southern Africa.1 Its scientific name is Oreotragus oreotragus, and its common name means “rock jumper” in the Afrikaans language. The klipspringer is a member of the large mammalian family Bovidae, which includes many other species of antelope, as well as sheep, cattle, goats, muskoxen, gazelles, bison and buffalo. 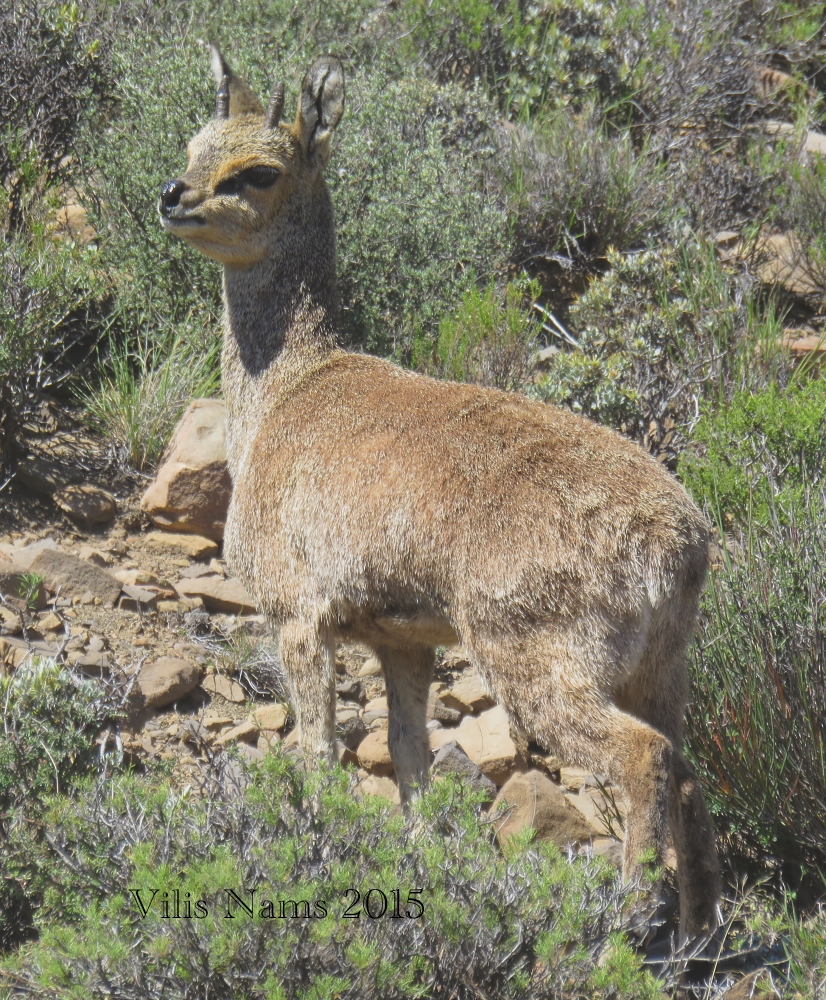 Klipspringers stand 60 centimetres tall at the shoulder and weigh 10-13 kilograms, with ewes heavier than rams. Only the rams bear horns, and the average horn length is 8 centimetres, with the record horn length being twice that. Klipspringers have coarse, hollow hairs that are thought to serve two purposes: cushioning falls and temperature regulation in harsh, exposed environments.2 The klipspringers’ yellow-brown colour offers good camouflage, blending in with rocky habitats. 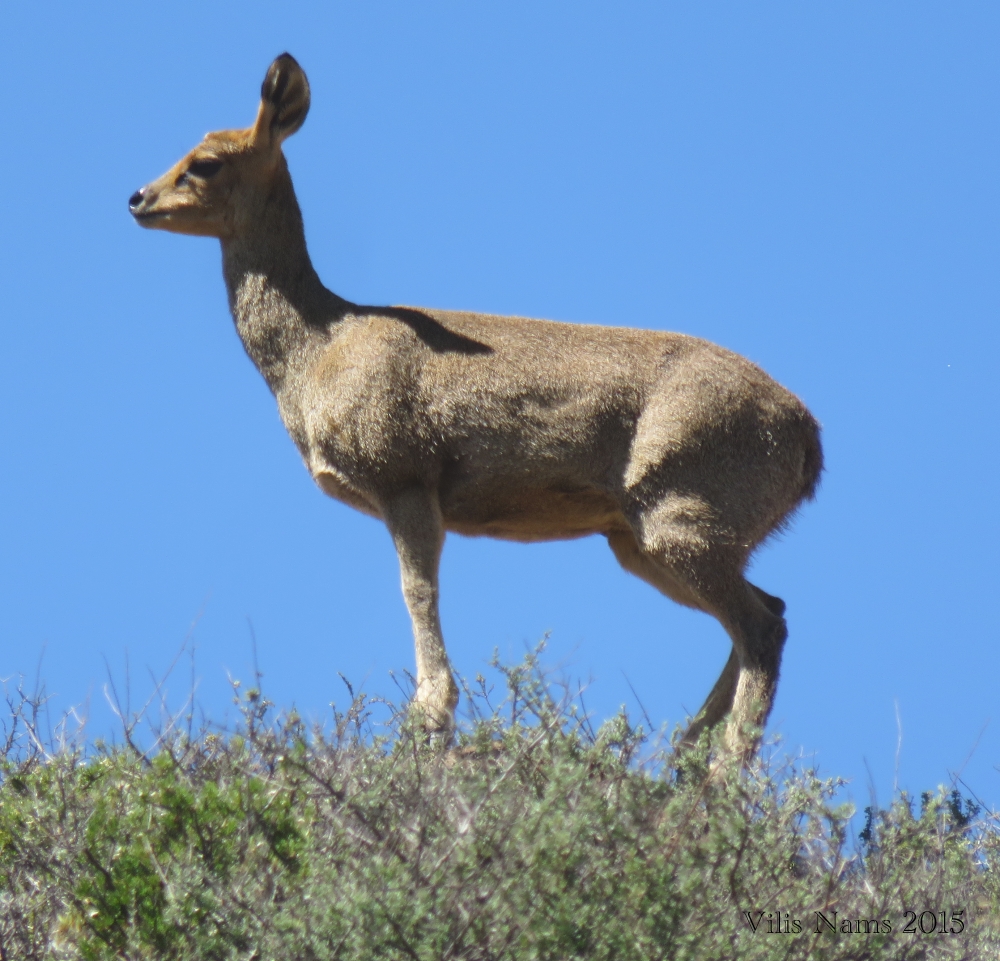 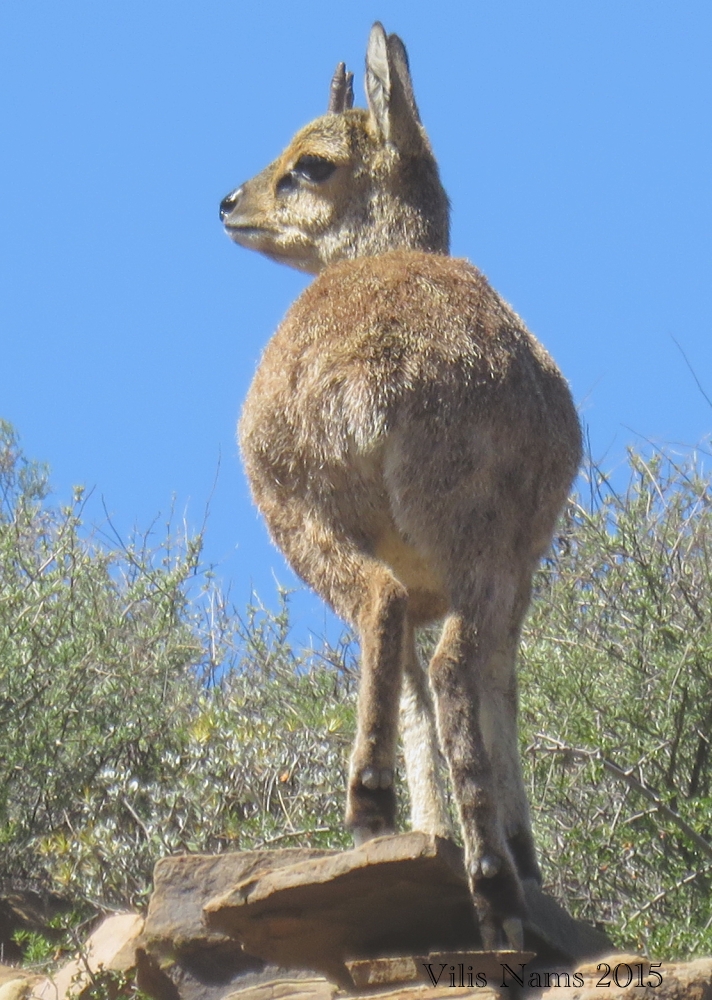 Klipspringers are the only antelope that walk on the tips of their hoofs, an adaptation that enables them to move over rocky ground with great agility. They are primarily browsers, feeding on twigs. Klipspringers generally occur in pairs or family groups and blow loud alarm whistles as warning signals.2

Viis and I first encountered klipspringers when driving Klipspringer Pass in Karoo National Park, South Africa. Vilis spotted a ram at the roadside, and we heard it emit several loud, buzzy whistles. More whistles came from somewhere on a rock outcrop on the other side of the road. The ram crossed the road and bounded up the rock outcrop, pausing to look back over its shoulder at us. Vilis took full advantage of those pauses to photograph it.

Then a ewe appeared on the skyline, and that explained the other whistles. The two klipspringers were curious, watchful and perfectly at home in their rocky realm.