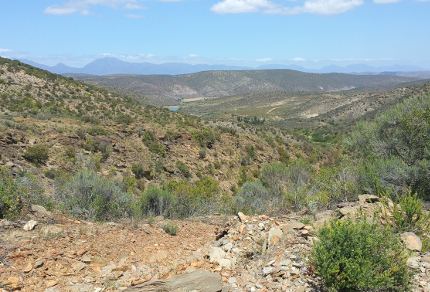 On October 25, the day after our Cango Caves adventure, Vilis and I drove 40 kilometres west from Oudtshoorn to Calitzdorp and then south to check out a leopard research study area in the Rooiberg, a range of dry, thrusting hills and low peaks in the midst of Western Cape’s Klein Karoo region.

The Klein Karoo or “Small Karoo” is a 290-kilometre-long, 40 to 60-kilometre-wide valley. To the north, it’s sharply bounded by the Swartberg mountain range, beyond which lies the Great Karoo. To the south, it’s bounded by the Outeniqua-Langeberge range of mountains, beyond which lies the coastal plain. The northern reaches of the Klein Karoo, at the foot of the Swartberg range, receive much more moisture than the rest of the region and are lush in comparison with the arid semi-desert vegetation of the Great Karoo and southern Klein Karoo. We had entered the Klein Karoo by driving south from Karoo National Park in the Great Karoo and through the truly spectacular Swartberg Pass. (Tap on photos to enlarge.)

At 10:00 a.m., the temperature was already 27° Celsius. West of Oudtshoorn, ostriches and cattle grazed on wide open rangeland vegetated with low-growing shrubs. Ten sacred ibises flew overhead, their black heads and necks a stark contrast to their white bodies. To the north, serrated peaks of the Swartberg mountains bit into a hazy mid-morning sky.

Farm fields near Calitzdorp, in the Klein Karoo (© Magi Nams)

A kilometre outside of Calitzdorp, a sign read, “Klein Karoo Wine Region.” South of the town, we drove past vineyards, olive estates, orchards and a sign boasting back-to-back South African championships for a port winery. We turned onto a narrow gravel road and drove past more ostrich paddocks then between lumpy hills covered with rocks, low-growing thorn trees and heath shrubs. Delightful yellowish-pink, papery capsules on one shrub reminded me of ornamental Chinese lantern plants grown in Canada. 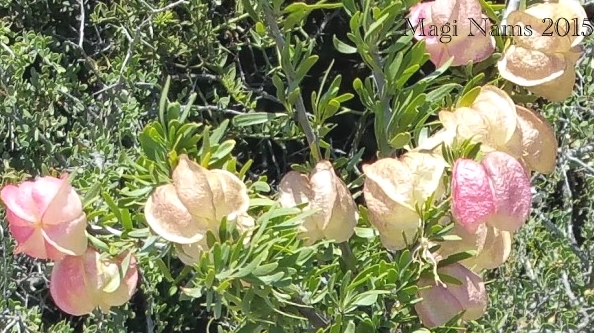 In Rooiberg Pass, an 18-kilometre stretch of rugged rock and gravel road constructed between Calitzdorp and Van Wyksdorp in 1928, our path became even narrower as it twisted upward in sharp curves onto a plateau atop the Rooiberg range and then descended. When we stepped out of the car to enjoy the view from the edge of the plateau, a cool mountain wind refreshed us. Floral scents pervaded the air, emanating from the fynbos wildflowers that bloomed all around us, in shades of purple, magenta, yellow and white. Overhead, a jackal buzzard wheeled on thermals, broad wings spread wide. There wasn’t another vehicle in sight. We felt as though we had the entire range of Rooiberg mountains to ourselves. 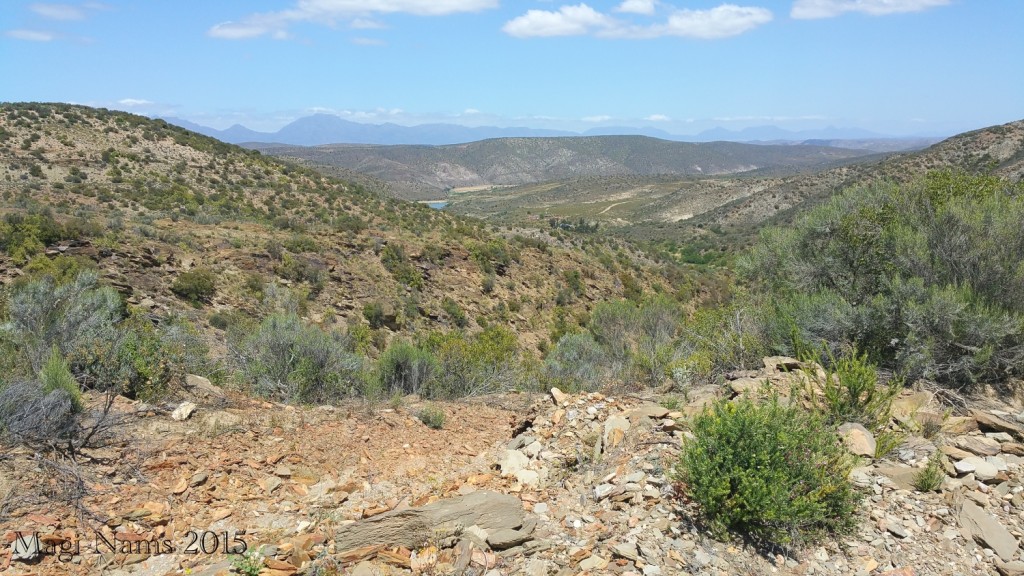 As we descended from the plateau, we drove over and around rugged, rocky hills. It wasn’t what I had imagined leopard habitat to be like. There were no large trees for the big cats to rest in or cache prey in; however, there were also no lions or hyenas that might want to take over their kills. Later, I learned that leopards tolerate a broad range of habitats throughout much of Africa, the Middle East and as far east as China. Those habitats include low- and high-rainfall areas, mountains, coastal plains and nearly everything in between, although leopards have been largely exterminated from central South Africa’s sheep-farming country.1 Vilis told me that leopards in the Rooiberg area hunt klipspringers and rock dassies (hyraxes). 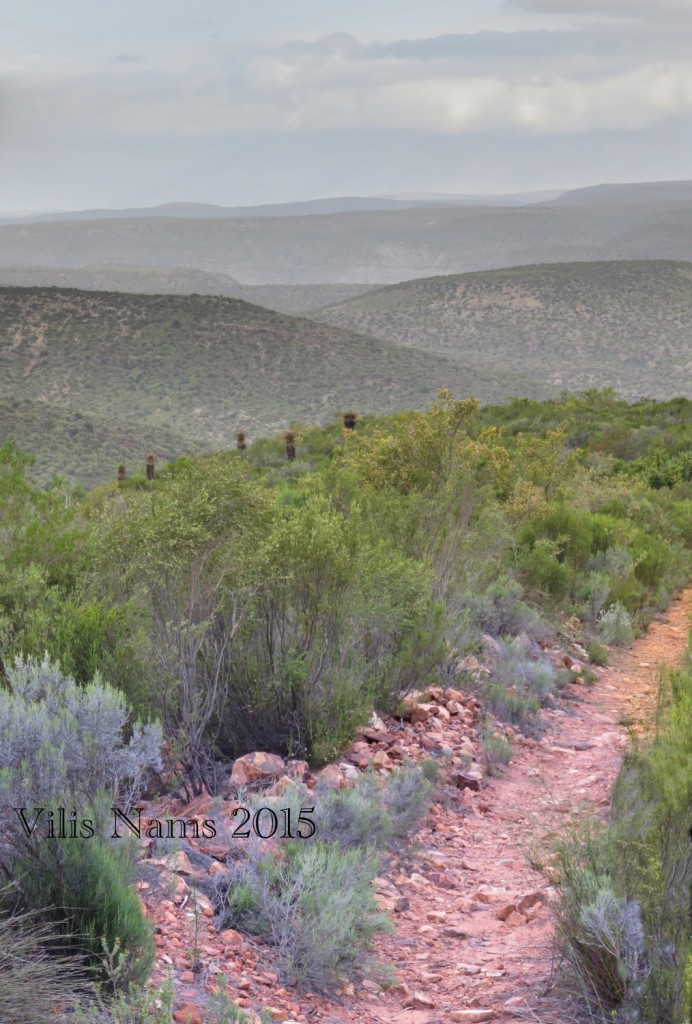 In the valley south of the pass, abandoned farm buildings with cracked walls and broken windows stood in farmyards, telling of hard times and property conglomeration. We located Rooiberg Lodge, our accommodation for the night and spent the hot early afternoon hours in the shade on our self-catering unit’s veranda.

As dark clouds rolled in during late afternoon, we hiked a 4×4 track up into the hills backing the lodge. I kept my eyes peeled for snakes since the lodge manager had told us, “We have lots of snakes. Puff adders. Cape cobras. It’s hot today, so they’ll be on the move.” As it turned out, we didn’t see a single snake; however, the Klein Karoo’s Rooiberg hills and clouds were magnificent! 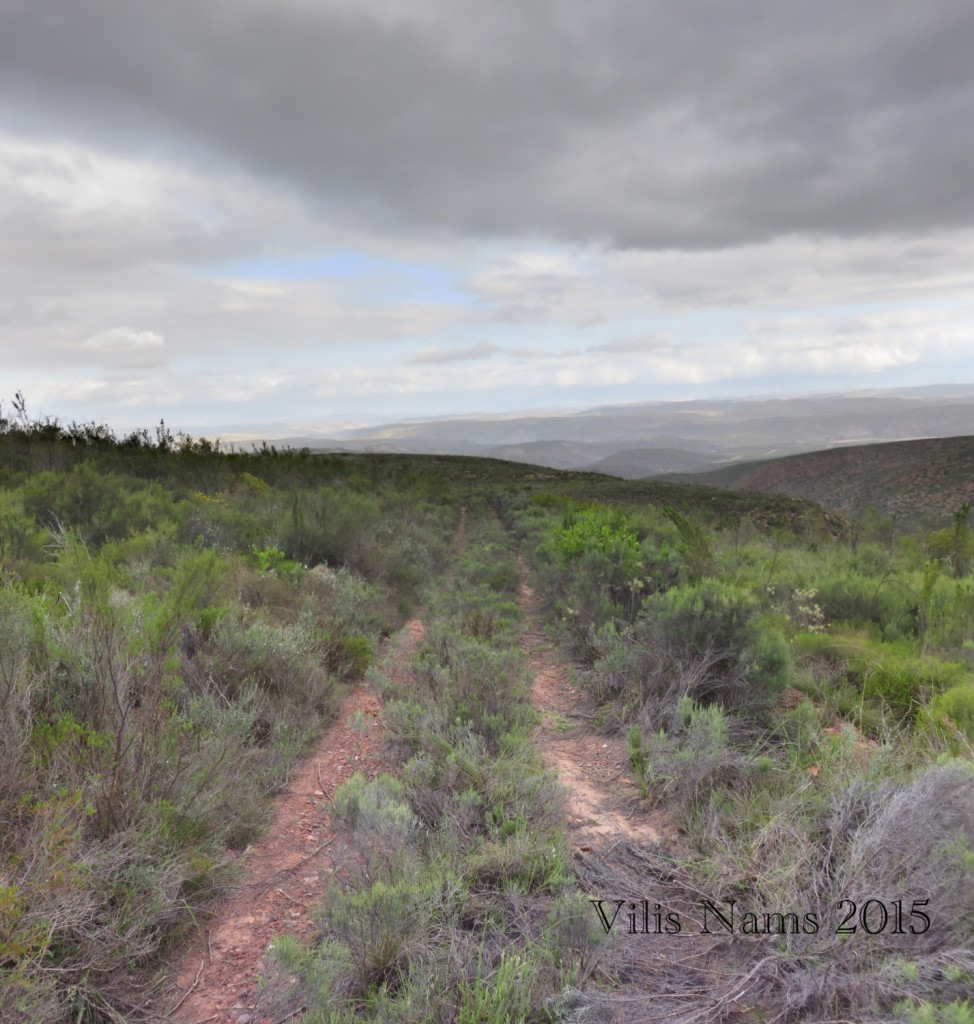