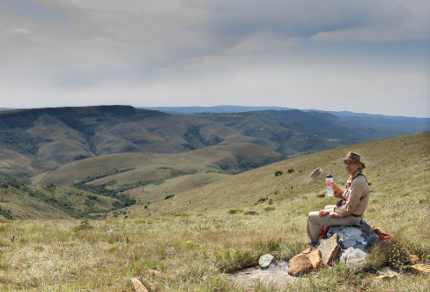 Each weekend (except a rainy one) that Vilis and I have been in South Africa, we’ve gone exploring on foot or by car. To date, all of our excursions have been in Eastern Cape, within two hours drive of Grahamstown, our home base. We’ve enjoyed majestic wildlife in Addo Elephant National Park, Afromontane forest and samango monkeys at Hogsback, sandy beaches at Port Alfred and rugged farming country, complete with baboons and black eagles, in Baviaans River Valley. South Africa has so much to offer! 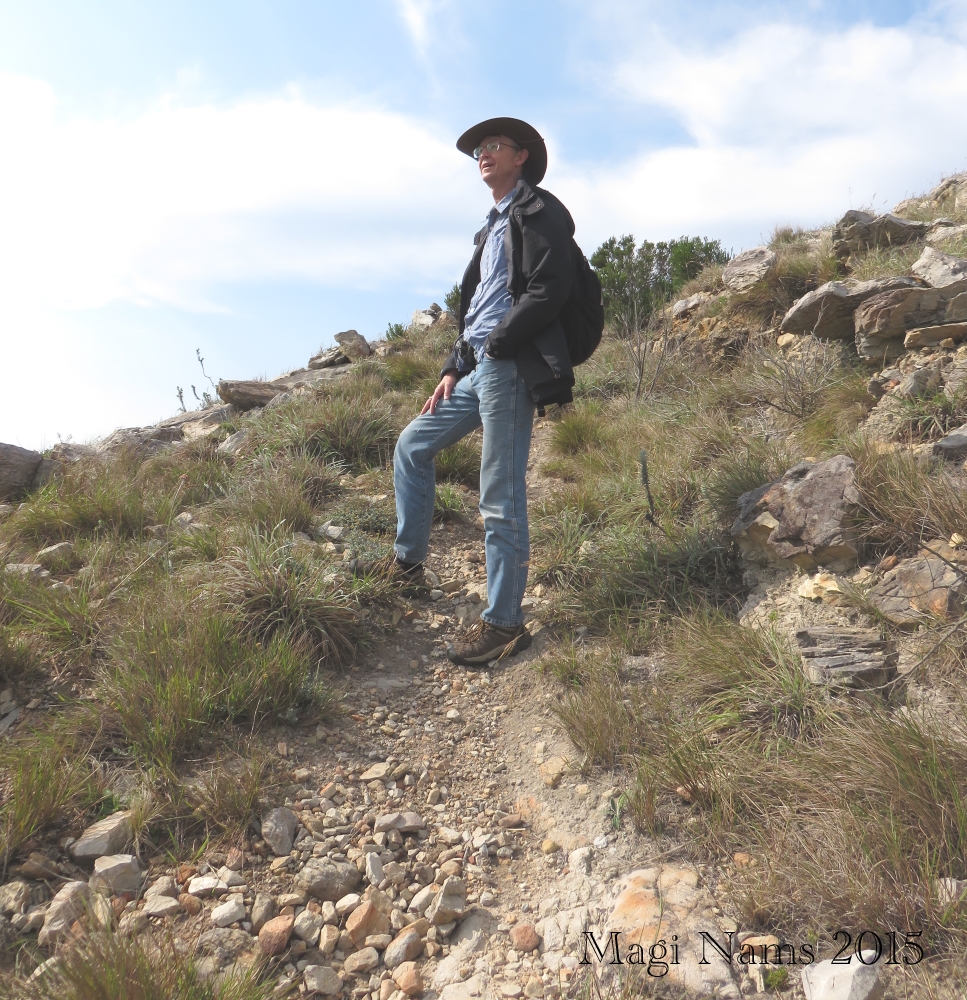 On an uphill section of Oldenburgia Trail (© Magi  Nams)

Close to home, we’ve discovered a web of trails in Grahamstown’s Southern Commonage. At the end of August, we explored Featherstone Kloof, and two weeks later, the Rietberge fynbos on Signal Hill, a long, high ridge between the city and Featherstone Kloof.

Recently, on September 20, we hiked a five-hour, 15.5-kilometre loop that included Oldenburgia Trail’s high country and a return hike through Featherstone Kloof, with lots of pauses to look for birds and photograph spectacular scenery.

The day was clear, sunny and blustery. The morning promised heat, and the afternoon delivered it. We started our hike at Mountain View Manor perched high on Mountain Drive and descended to the saddle at the east end of Featherstone Kloof, where we linked up with Oldenburgia Trail. We panted our way up a steep section of rocky trail to the top of a long, high ridge north of Featherstone Kloof. 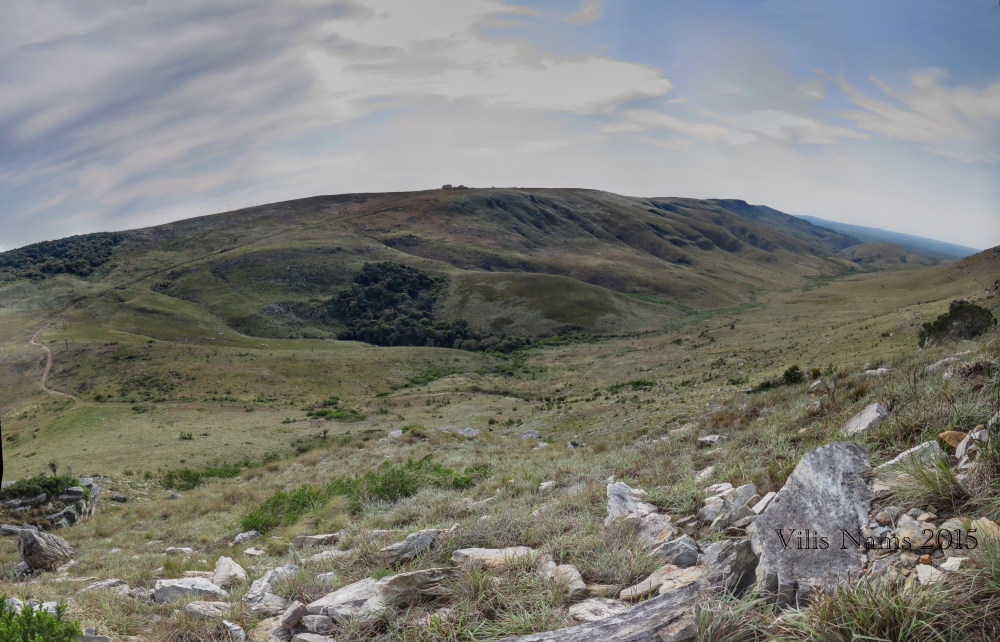 As we hiked westward along the ridgetop, grasses swished against our shoes. More than once, the strong wind stole our hats and tossed them onto fynbos and grassland. Wildflowers bloomed pink, purple, yellow and white among heaths and grasses. Backlit bracts of king protea flowers resembled shining circles of pink spear tips. Exquisite! 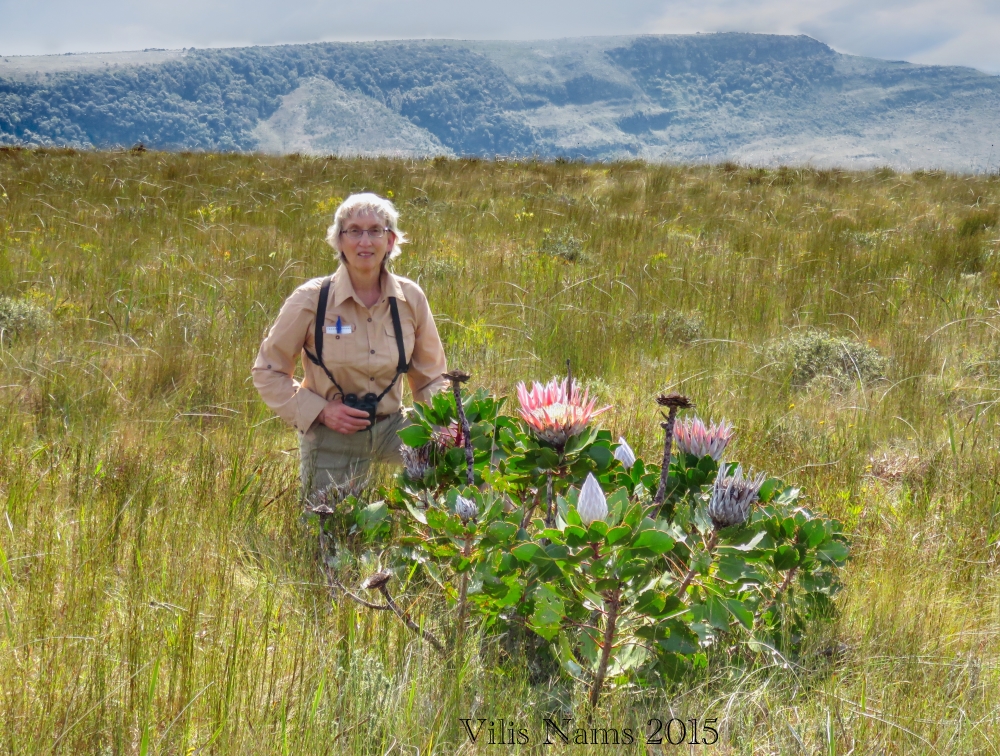 Taking a break on Oldenburgia Trail. Featherstone Kloof is below, and Signal Hill is the highest point in the background. (© Vilis Nams) 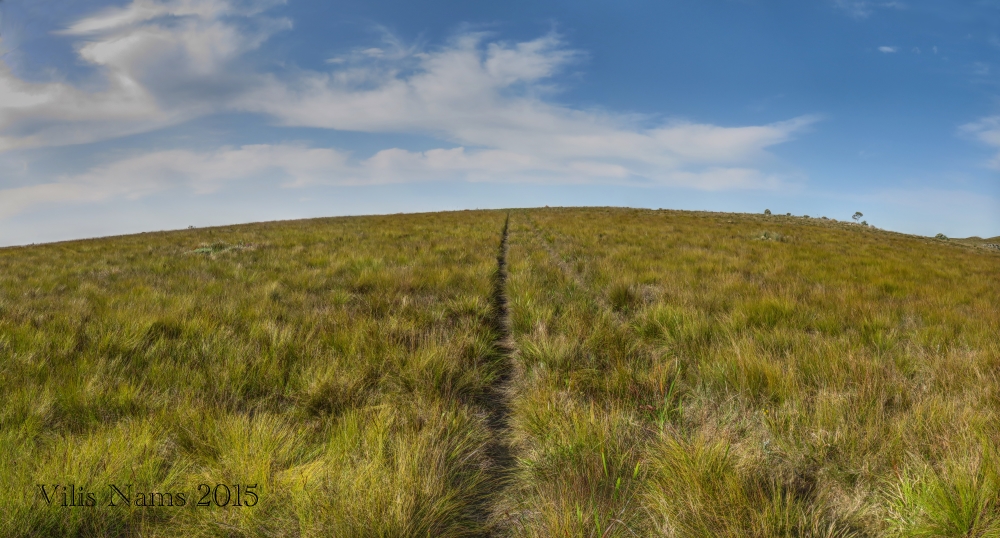 We felt like we were walking on top of the world. Vilis asked, “What is it about a long view that makes you feel good?” I suggested, “Promise. Potential. Looking forward. Freedom. Excelsior! Ever higher.”

Cape longclaws flushed from grassland, their “meow” calls caught on the wind. White-necked ravens floated past the ridge edge, wings balanced on updrafts. We hiked to the ridge’s highest point and then to the west where the upland ended in a krans (cliff). Vilis took a suite of photos and later stitched them into a panoramic view (below) that shows the rolling hills and valleys east of Grahamstown and the Rietberge.

We hiked down a rocky spur and were surrounded by tawny hills and ridges cleft by narrow, wooded ravines. The first South African stile we’ve seen provided passage over a high stock fence. 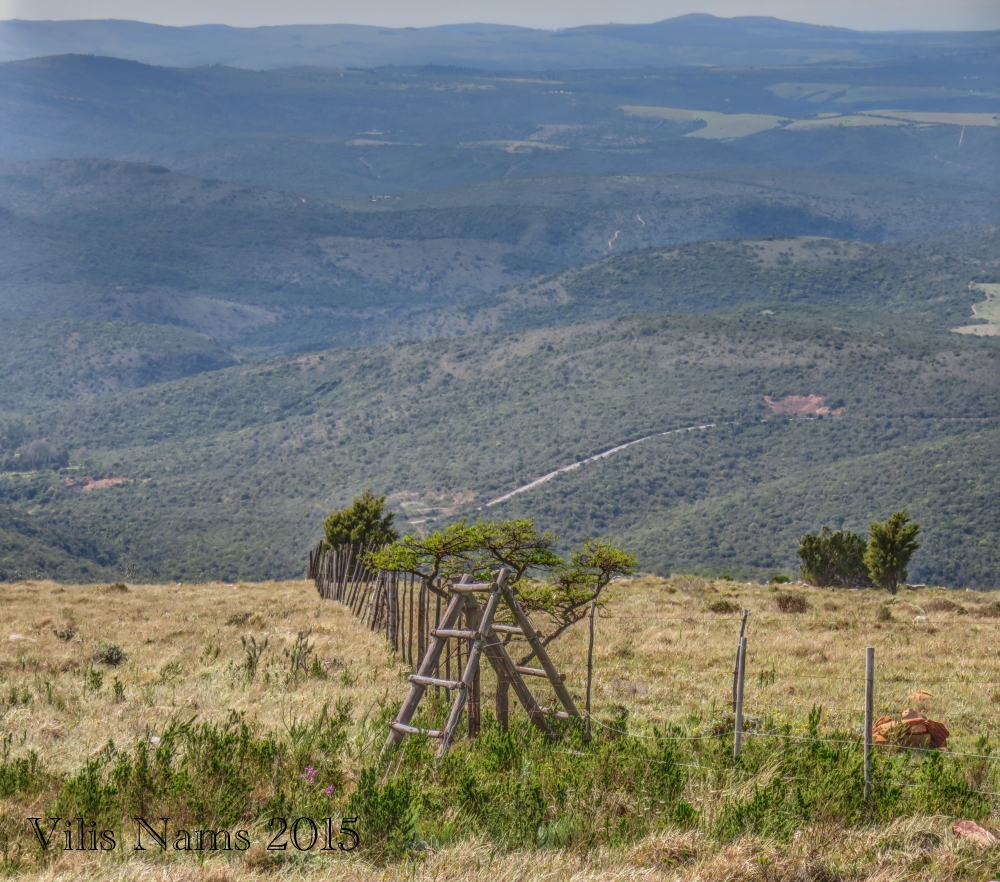 Heat poured down onto us as we hiked eastward through Featherstone Kloof. We paused to eat our bag lunch in shade provided by a scrubby thicket growing alongside a chuckling stream. That interval of coolness was most welcome! Sombre greenbuls defending territories in the thicket sang snappy songs ending with a falling bomb whistle. I heard the murmurings of Cape white-eyes, and a sunbird’s high-pitched bubbling melody was like liquid candy. Then it was back out into the midday heat. 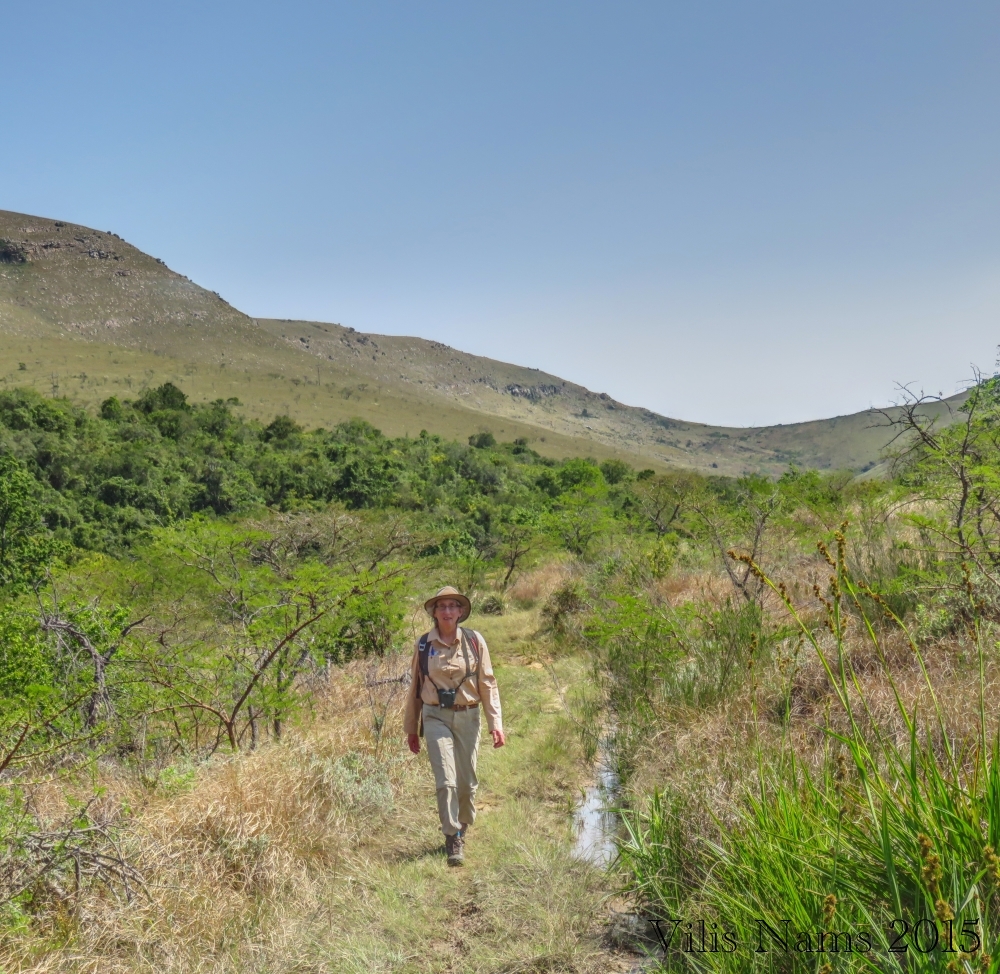 Alongside the trail, acacia trees bore vivid green, finely divided leaves that disguised their arsenal of thorns. A slender snake slithered through grasses ahead of me, and a lizard sprang off the track into cover. The recent warm weather had brought out the reptiles.

We hiked through open fynbos, crossed mucky stretches and rocky stretches. Sweat soaked our clothes as we tackled the last ascent, back to Mountain Drive. Slightly dizzy from heat and exertion, I thought I’d rest on a rounded rock ahead, at the trail’s edge. When I looked again, I realized that the greyish mound I was aiming for wasn’t a rock at all, it was a tortoise! The excitement of seeing the leopard tortoise, which is the largest tortoise species in southern Africa, cut through our weariness. We paused to take a breather and check it out – the first South African reptile we’ve seen up close. That sighting topped off an excellent hike. Well done, Oldenburgia Trail! 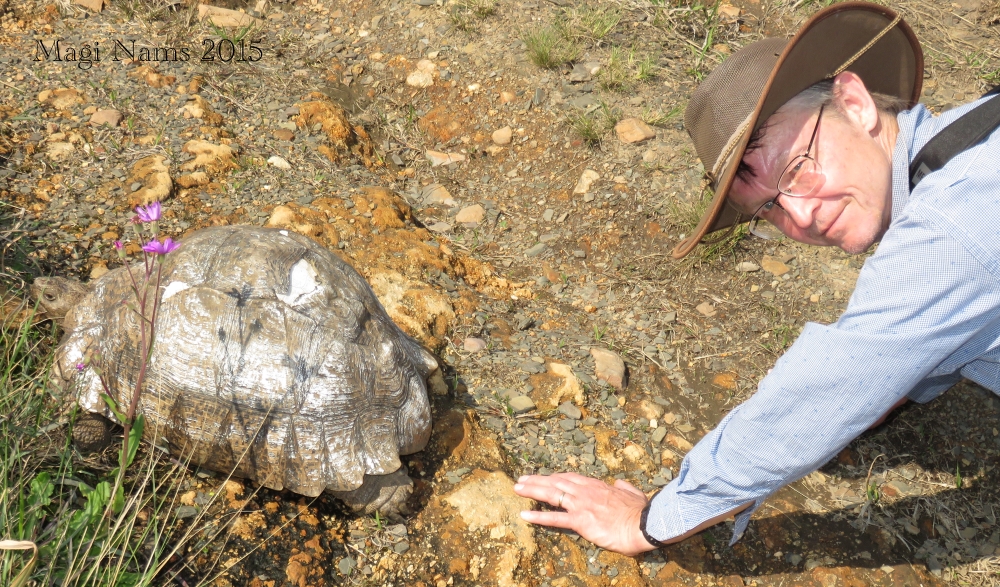