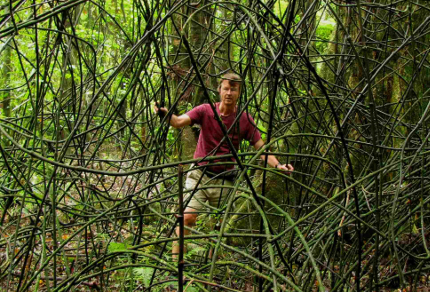 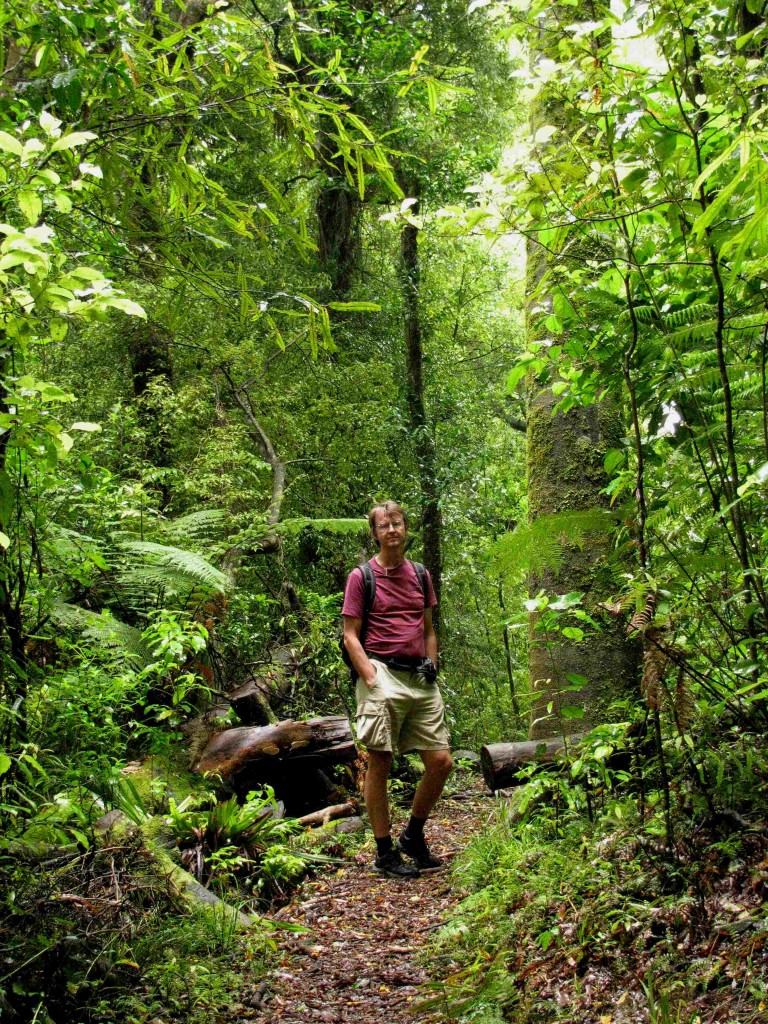 Again, mist and drizzle shrouded the central North Island this morning, and again Vilis and I tramped through dim native forests thick with a sense of time gone past. Shifting cloud obscured or revealed views of green crater lakes at the whim of the wind as we hiked Ngahopua Track in the Lake Okataina Scenic Reserve to the east of Rotorua. A long-tailed cuckoo rasped out a harsh call and flew above a clearing in the forest, its characteristic tail silhouetted against the misty sky. A fidgety grey warbler with white spots at the end of its tail flitted from shrub to shrub beside the track. Otherwise, the trail was quiet. 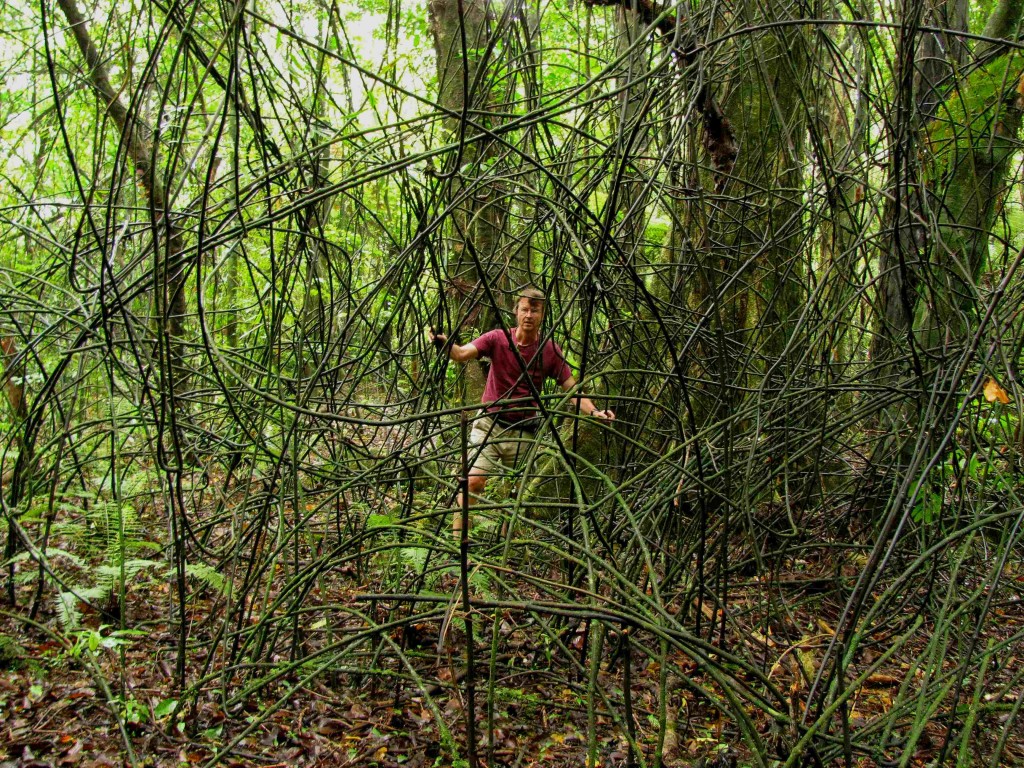 Vilis and Vines in Rainforest on Hongi’s Track (© Magi Nams)

Exhausted from sleeping poorly, and perhaps simply weary of hiking and camping in the rain, we decided to complete only one more short hike from Lake Rotoiti to near Lake Rotoehu northeast of Rotorua. Originally named Hinehopu Track after a Māori chieftainess who had homes on both lakes and travelled between them around 1620, the track was later renamed Hongi’s Track in honour of a Ngapuhi warrior who used it to portage canoes between the lakes in 1823 in order to attack an island-dwelling tribe.1 At 2.2 kilometres in length, the portage of heavy, wooden waka would have been a challenging one. For us, it was an immersion in lush, green forest thick with vines and bright with the voices of fantails and robins.

On finishing the return hike, we lunched on the shore of Lake Rotoiti, enjoying the peaceful view out over the large lake and sheer cliffs backing its shoreline. Again, as yesterday afternoon, we received a reprieve from rain, which I took advantage of to photograph tūī foraging for nectar in flax flowers and New Zealand dabchicks – a species of grebe – swimming near shore. A male paradise shelduck preened its black, rust, and white feathers, and a family of black swans cruised the waters near the base of the cliff. A little black shag swam and dove, while a black shag (larger and having a white throat) perched on a rock at the water’s edge, its wings hung out to dry. Brilliantly coloured with blue-green plumage on top and and an orange belly, a kingfisher zoomed along the shoreline and perched momentarily in a shrub overhanging the water. 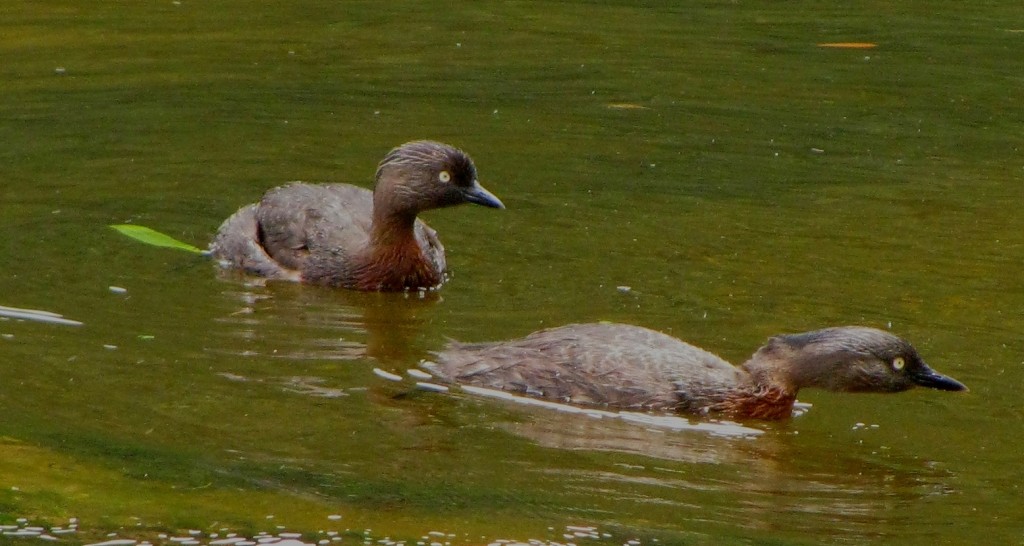 Reluctantly bidding the lake and its birdlife farewell, we drove west beside the northern shore of Lake Rotorua and then south to link up with SH 5, which carried us northwest toward Tirau through prime dairy country interrupted by a few stunning glades of native forest so green and lush they tore at my heart. Then we travelled on toward Cambridge and Hamilton through hobbit hills of terraced green dotted with sheep and dairy cattle, and north on SH 1 to Drury, near Manukau. There we booked into a motel for a taste of luxury and the space to dry rain-dampened or drenched clothes, bedding, and awning. We splurged on a smorgasbord supper at Valentine’s in Manukau, and for the first time, as I sat cozy and with strands of bright lights decorating the restaurant, I felt as though Christmas was just around the corner. 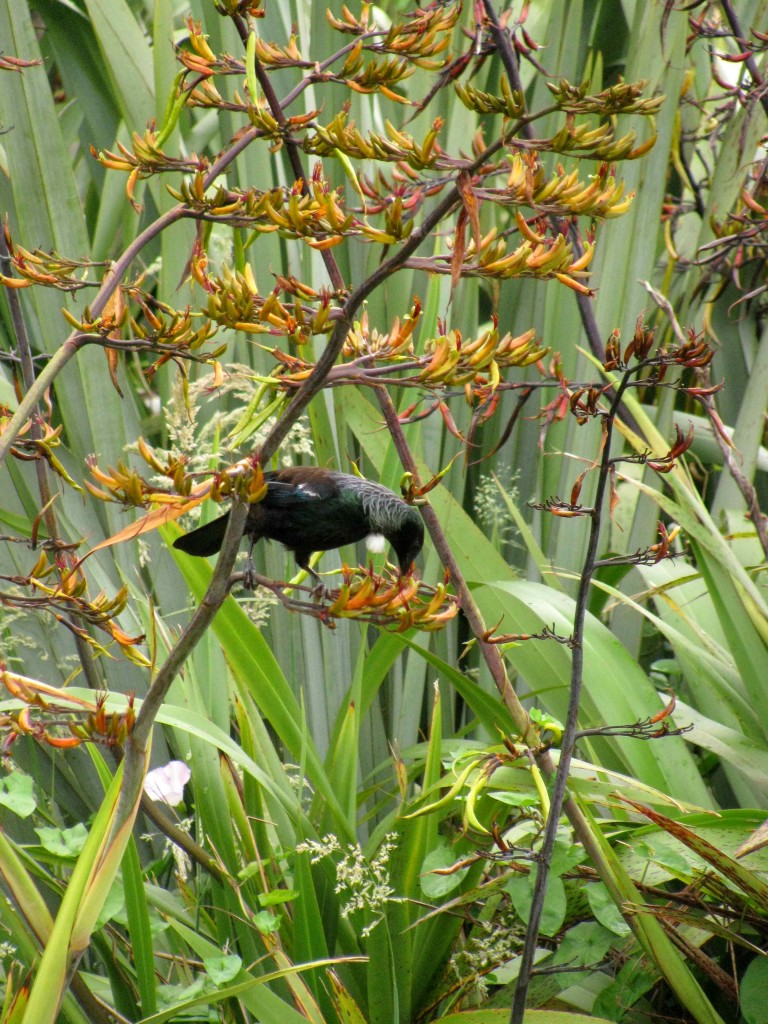