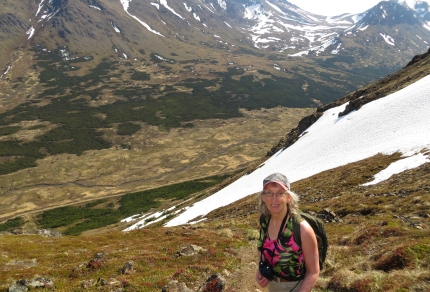 On the trail, with Flattop Peak in the distance behind me.

On the last day of Vilis’s and my five-day visit to Alaska in May, we rented a car and drove east through Anchorage’s sprawling suburbs to Chugach State Park (saw a moose browsing on shrubs in a roadside ditch). From the Glen Alps trailhead, we hiked the 2.5-kilometre track (396-metre rise in elevation) to the summit of Flattop Peak (1080 metres), Alaska’s most-climbed mountain.

The first section of track (half of the Blueberry Hill Loop) was an easy uphill grade that led us through subalpine vegetation dominated by grasses and herbs, deciduous shrubs (alder, willow) and trees (cottonwoods), and thickets of stunted conifers, notably mountain hemlock. Mats of crowberry and blueberry covered the ground on exposed hillsides. 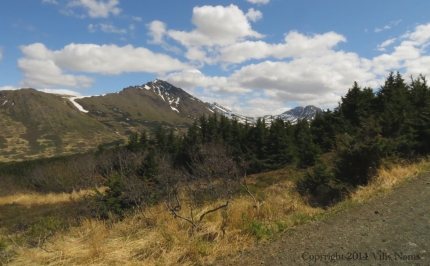 From Blueberry Hill, we looked out over Anchorage and Turnagain Arm of Cook Inlet, all the way to the Alaska Range and the ‘Sleeping Lady’ in Denali National Park. Even at this point of our hike, the track’s VTFR (View To Forest Ratio) was away up there with the best I’ve ever experienced. Vilis and I coined this descriptor while hiking in the Yukon Territory years ago and have applied it to other Canadian hiking trails, as well as tracks in New Zealand and Australia.

Viewe from Blueberry Hill, showing Anchorage, Cook Inlet, and ‘The Sleeping Lady’ in centre back

The hike from our Blueberry Hill viewpoint to the saddle at the base of Flattop Peak was more demanding but still easy to moderate level of difficulty. We traversed hillsides, climbed sets of wooden steps set into steep sections of the trail, and enjoyed more long views out over the Chugach Mountains and the coastal lowland adjoining Turnagain Arm.

Spring had arrived in southeastern Alaska three weeks earlier than usual, which was certainly a boon for us while we hiked. Along with mild weather, we enjoyed wildflowers blooming alongside the trail and the bright melodies sung by male songbirds defending breeding territories. I spotted violet-green swallows skimming over the mountainsides, and a male golden-crowned sparrow singing in a dense thicket. The songs of American robin, varied thrush, song sparrow, hermit thrush, black-capped chickadee, dark-eyed junco, and ruby-crowned and golden-crowned kinglets spilled out into the mountain air. 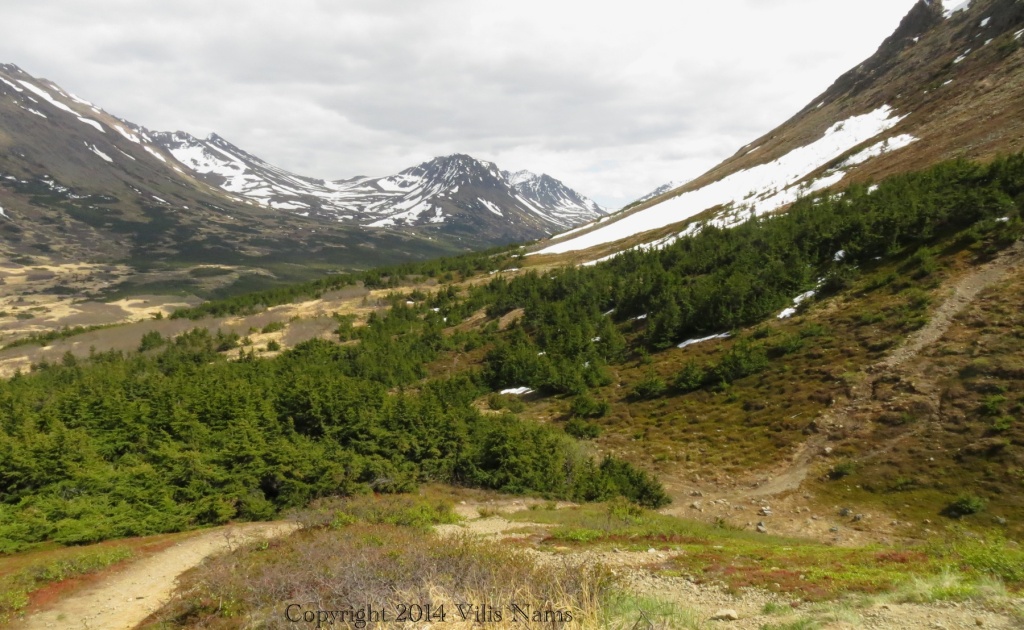 Saddle at the base of Flattop Peak

From near the track’s saddle below the steep incline to Flattop’s summit, we spotted Dall sheep grazing and resting high on mountainsides across the valley. The climb to Flattop’s summit led us through talus fields and hit the challenging level in a boulder field near the summit, where hiking became rock scrambling. We topped out above the boulder field and were rewarded with a 360-degree view and more wildflowers and birds. Cushion plants grew tucked into crevices between rocks and against the shattered rock substrate, and American pipits flitted over the mountaintop, their white outer tail feathers catching the eye.

View of Chugach Mountains and Campbell Creek from Flattop Peak

When we were satiated with the spectacular views, we made our way down a steep, rough trail on the north side of Flattop. As we descended through the alpine zone, Vilis lost his footing, took a tumble, and gained some mountain rash on his arm. After that, we crept even more carefully down the mountain, heading for the Campbell Creek Valley and its gravel road. As we neared Flattop’s base, I heard a snipe winnowing off in the distance and spotted a male fox sparrow belting out his musical song in a copse of stunted evergreens. Vilis’s birding app on his smart phone helped me confirm the songs of male orange-crowned and Wilson’s warblers skulking in dense alder thickets alongside the  quiet road, which we walked back to the Glen Alps trailhead. All in all, this was a great hike – definitely one of the highlights of our brief Alaskan sojourn. 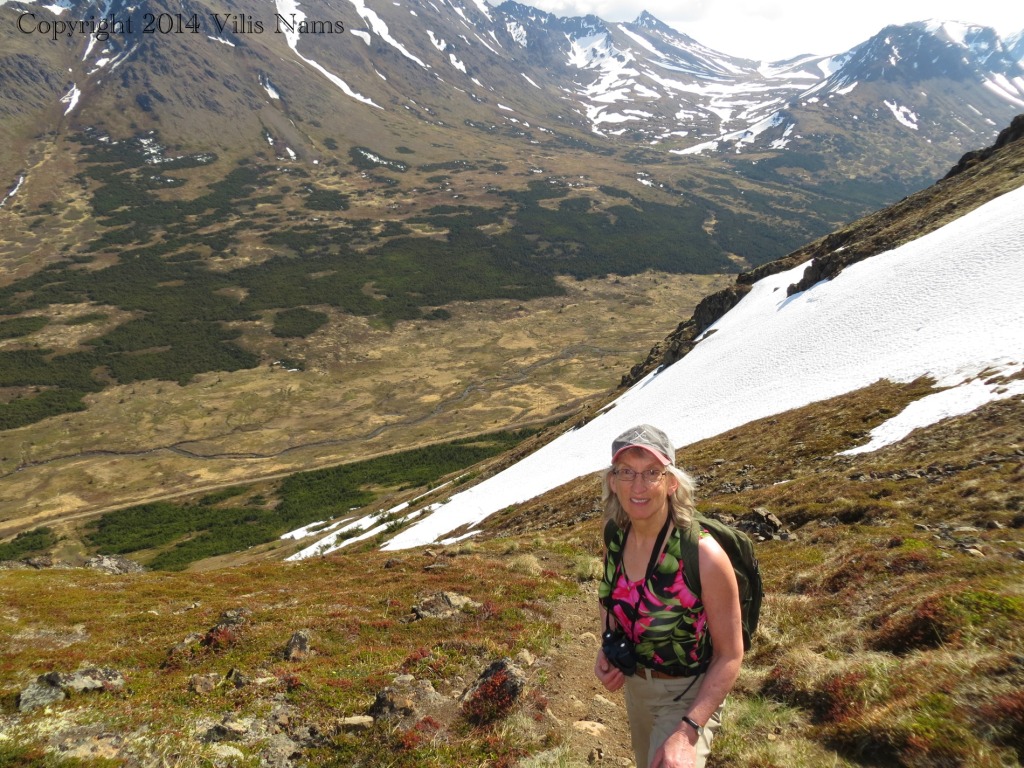 On our descent of Flattop Peak