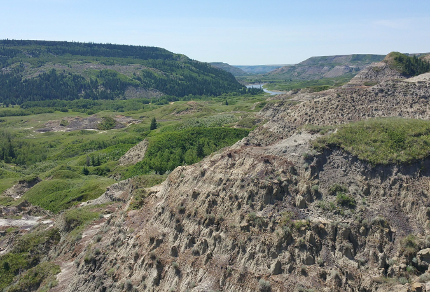 Dry Island Buffalo Jump Provincial Park contains a wonderful diversity of landscapes sculpted by the eroding power of wind, rain and the mighty Red Deer River. The park is a 34.5-square-kilometre area of Canadian badlands in central-east Alberta, about 100 kilometres southeast of Red Deer. Last week, during a week-long vacation in my home province, Vilis and I hiked unmarked trails through the park’s prairie grasslands, steep-walled coulees and up and down eroding hills. (Tap on photos to enlarge.) 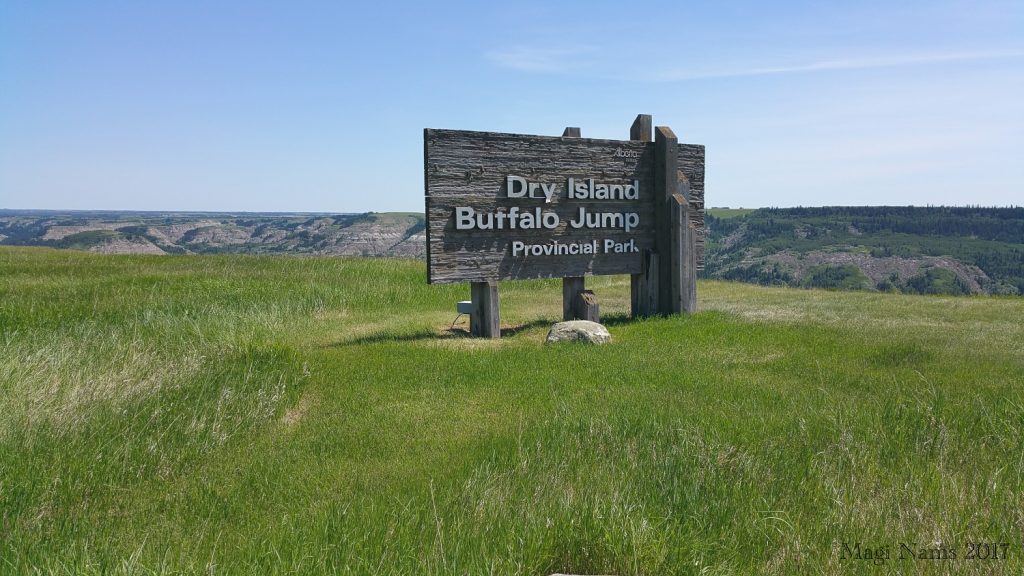 On our arrival, we picnicked atop a grassy plateau with a spectacular view out over the river-carved badlands. Long ago, buffalo hooves thundered over that grassland as human hunters stampeded their prey toward the edge of a 45-metre-high cliff. (The top of that cliff is the grass edge beyond the sign in the above photo.) 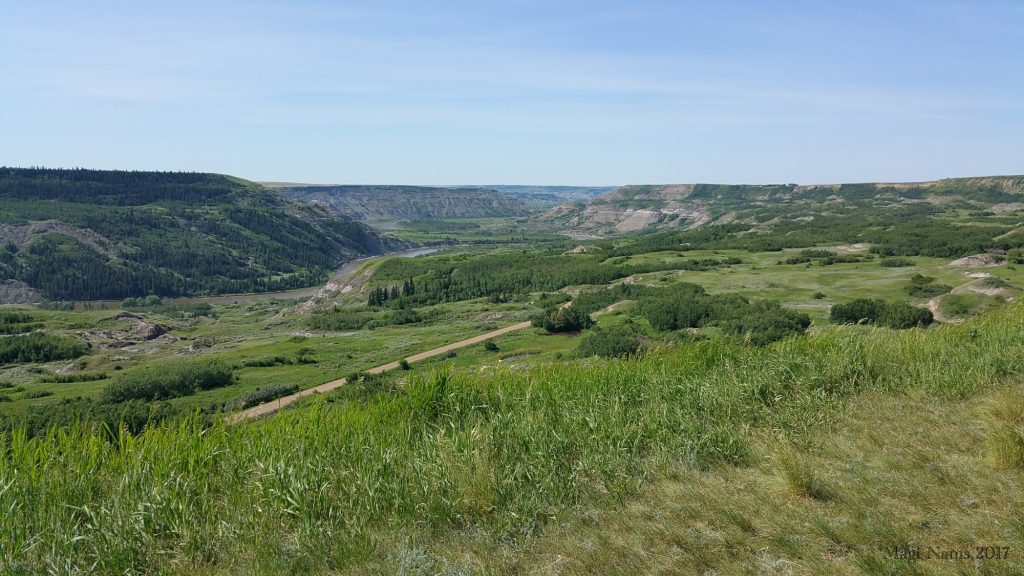 It was easy to imagine Alberta’s native peoples butchering the fallen buffalo, cutting the meat into strips and drying it; then, after the meat was dried, pounding it into powder and mixing it with berries and hot buffalo fat to create pemmican. Buffalo (also known as plains bison) were the plains people’s primary food source. A successful stampede over a buffalo jump could yield enough food for a year or more.1 Tap here for more information about the historical importance of buffalo to Canada’s plains native peoples. 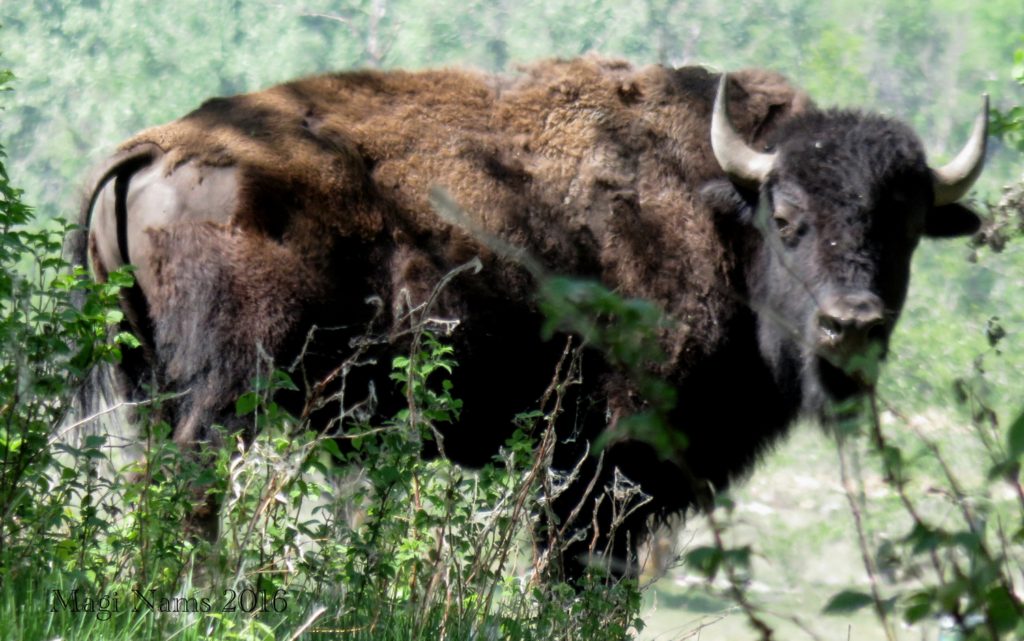 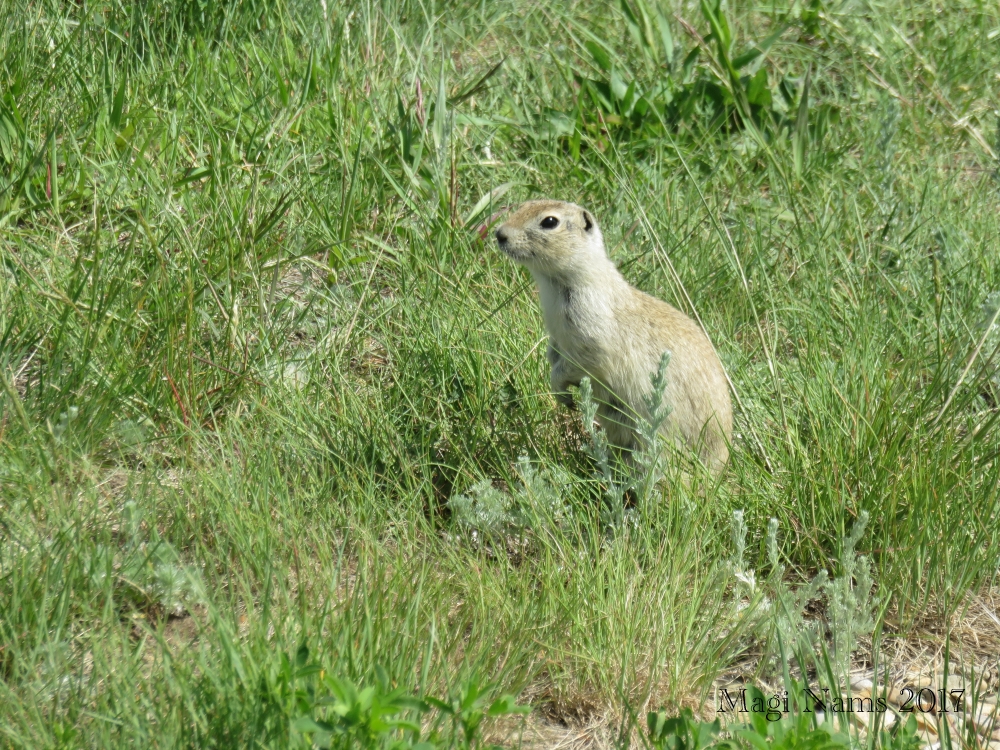 As we picknicked atop the plateau, butterflies flitted among shrubs, and a red-tailed hawk glided above the river valley. We spotted perky Richardson’s ground squirrels, three of them half-hidden in a burrow beneath a sign warning that the gravel road leading down the escarpment to the Red Deer River is impassable in wet weather.

The soil in Dry Island Buffalo Jump Provincial Park contains a high percentage of bentonite, a clay-like substance2 that accounts for its slippery character when it’s wet. When dry, it’s easy to travel on. Six years ago in May, when Vilis and I first visited Dry Island Buffalo Jump Provincial Park (see my post, Canadian Badlands), the weather was cold and wet. We left our vehicle in the parking area atop the escarpment and slid our way down the steep, greasy road on foot. Last week, in dry, sunny weather, we drove the access road down to the picnic area and canoe launch beside the Red Deer River. Wide and serene, the river flowed smoothly past towering cliffs of ribbed rock and soil. 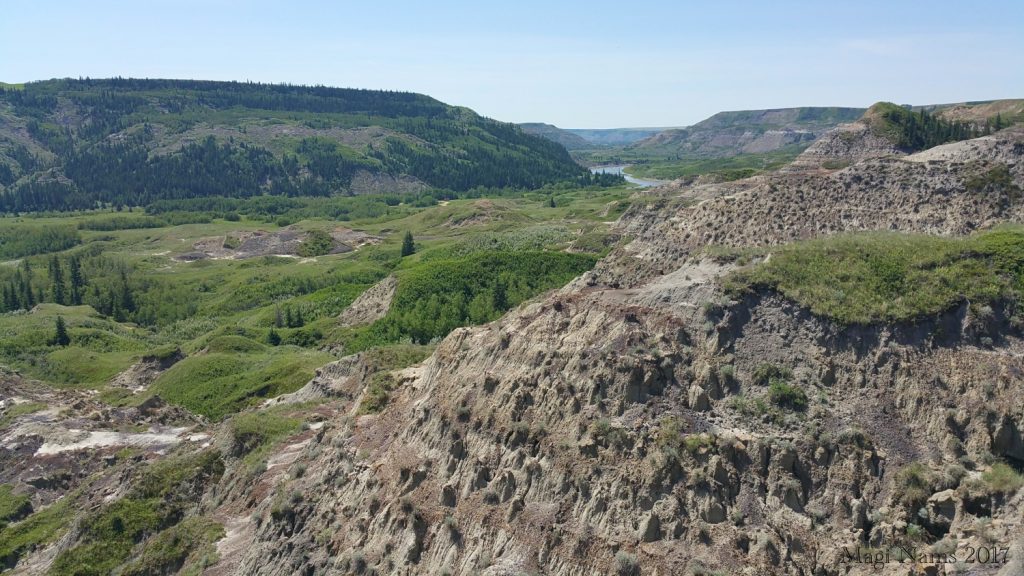 In the valley, a strip of balsam poplar woodland beside the Red Deer River was alive with birds. I heard the songs of house wren, clay-colored sparrow, least flycatcher, common yellowthroat, red-eyed vireo, yellow warbler, American goldfinch and veery. A yellow-bellied sapsucker rapped on a tree trunk. A Baltimore oriole flew overhead. We also spotted a Franklin’s ground squirrel scurrying about among the woodland’s understory herbs and shrubs. Franklin’s ground squirrels, with their olive-brown coats, greyish heads and bushy tails, are solitary and more likely to be found in treed habitat than are Richardson’s ground squirrels, which are a colonial, open-country species.

We left the refreshing shade of the riparian (riverside) forest and made our way toward the park’s drier hills and coulees, following unmarked trails and bushwhacking through thickets of buckbrush, prairie rose or silverberry. 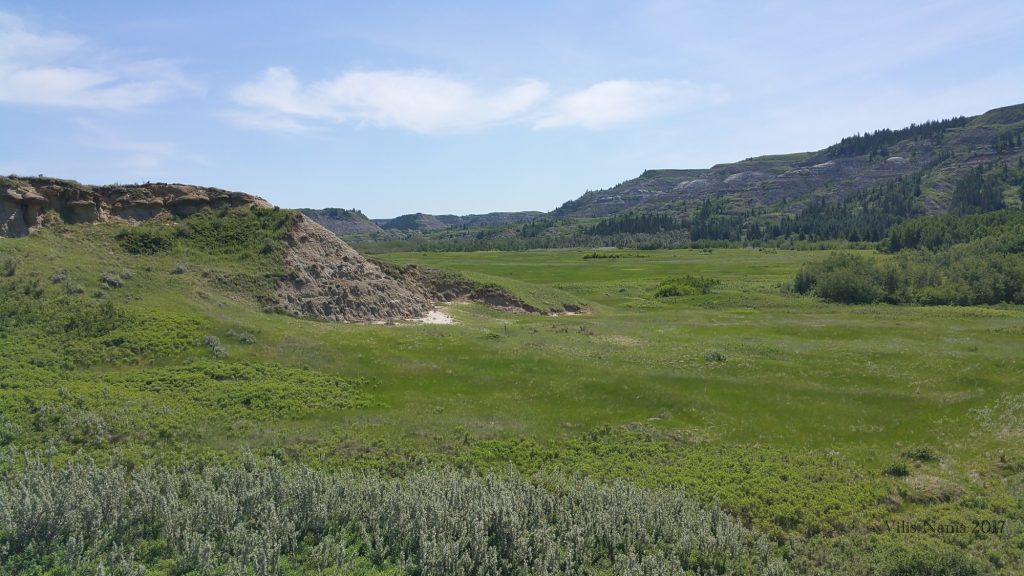 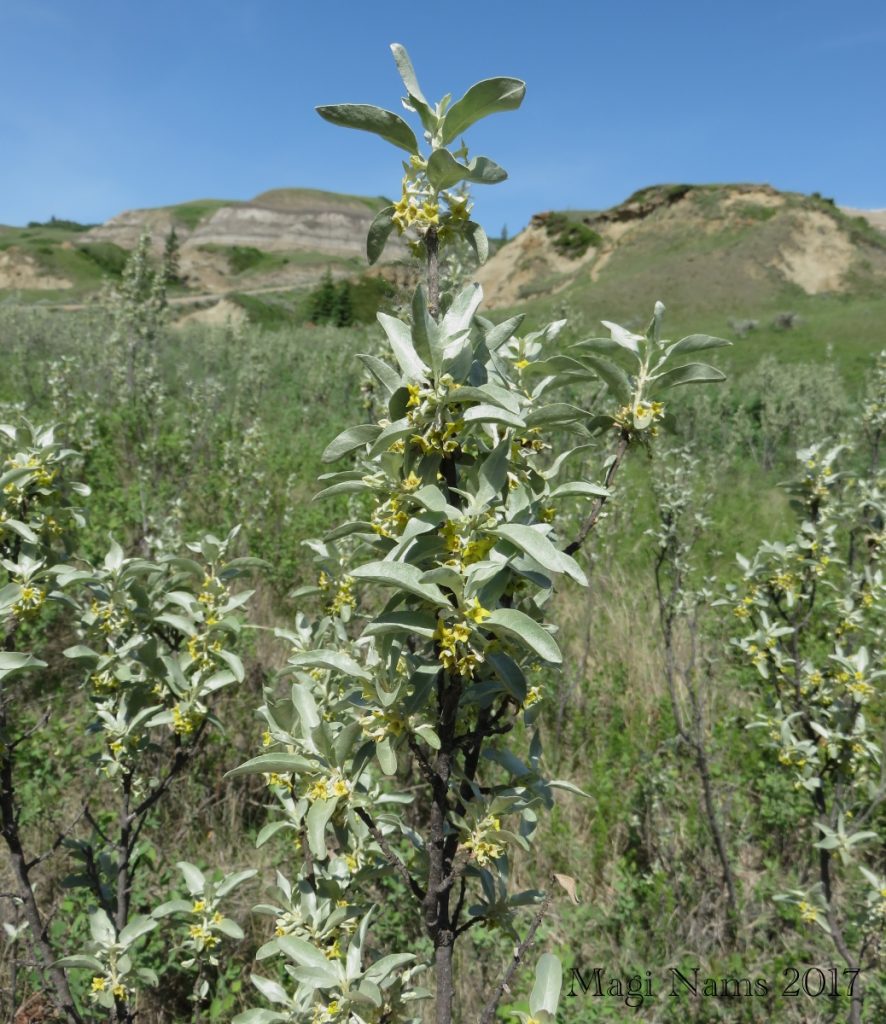 Wildflowers abounded. The fluffy seed heads of three-flowered avens waved in the breeze, making it clear to see why another common name of this species is “prairie smoke.” Orange-red blossoms of scarlet mallow were tiny flames against dry ground.  Other wildflowers I was able to identify included Canada anemone, wild blue flax, field chickweed, prickly-pear cactus, yarrow, two-grooved milk vetch and prairie onion. 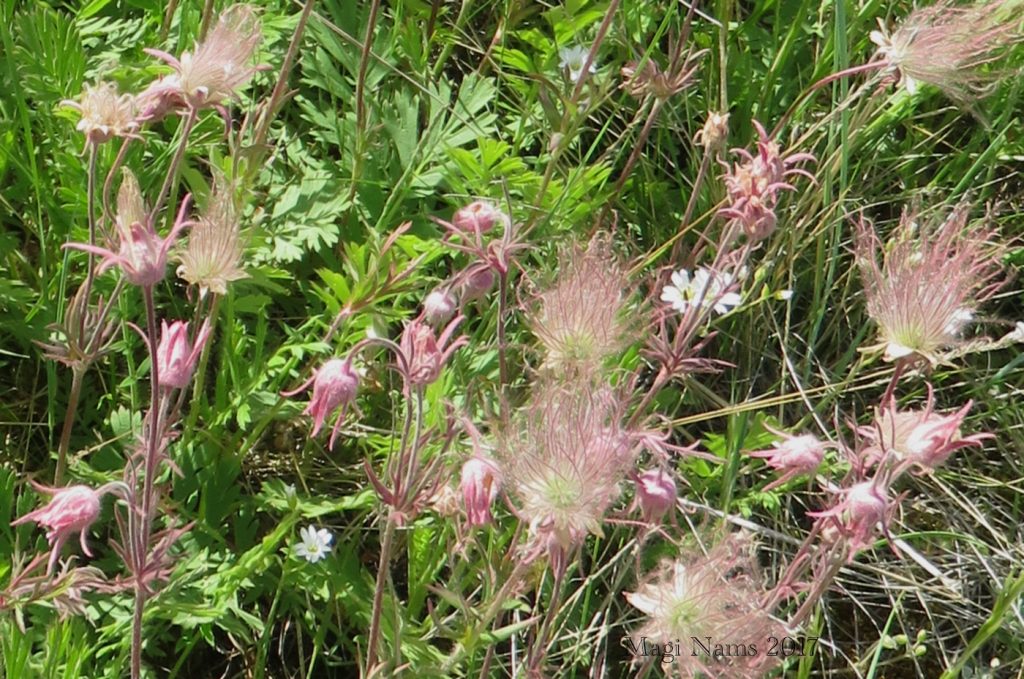 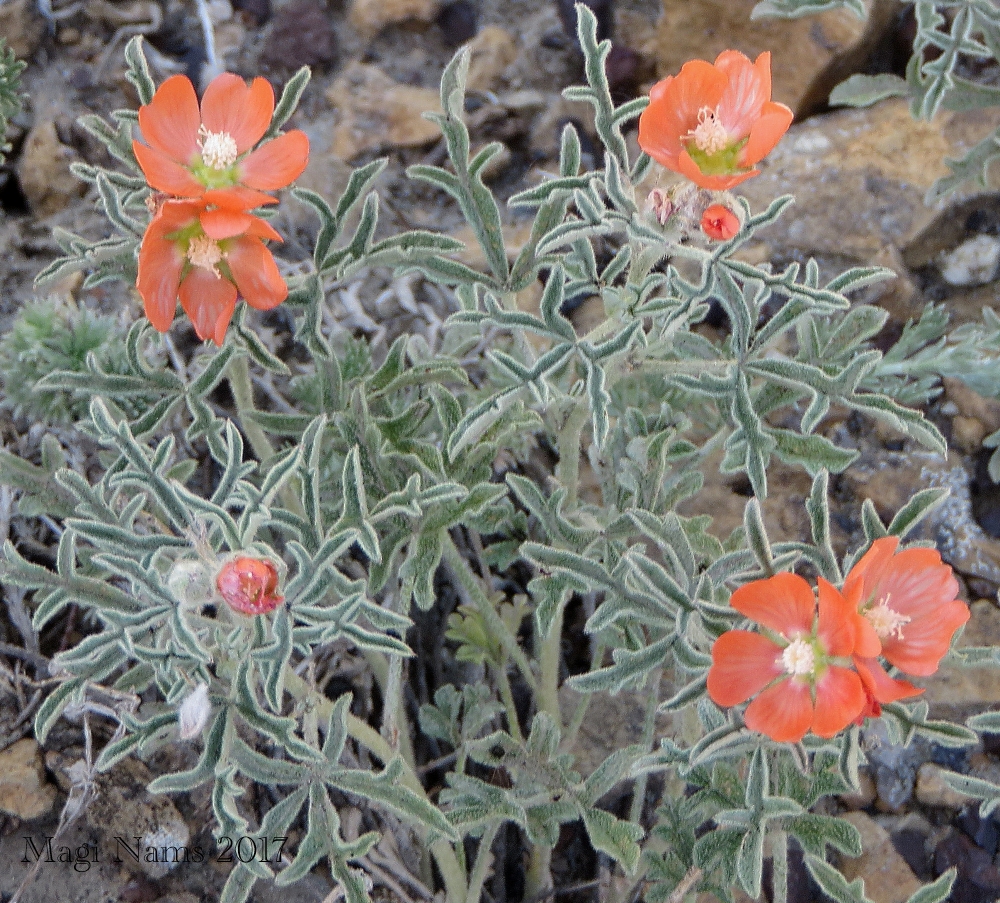 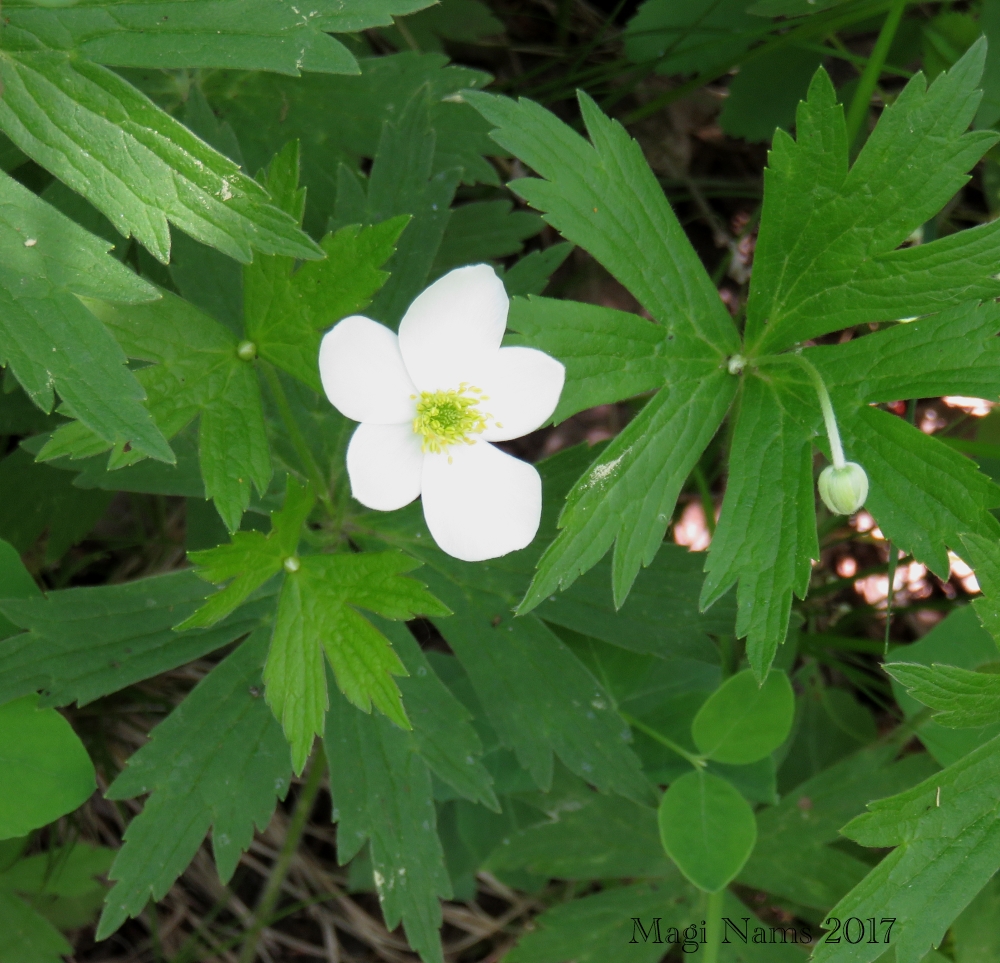 As we headed into the badlands, the relatively lush vegetation near the river gave way to drier conditions and sparser plant communities. Midday sunshine beat down on us and glared off rocks and pale soil. We stepped around prickly-pear cactus, and I pulled thorns from my hand after losing my balance and reaching out to steady myself, only to find that I’d put my hand smack-dab onto a cluster of dead cacti still armed with thorns. 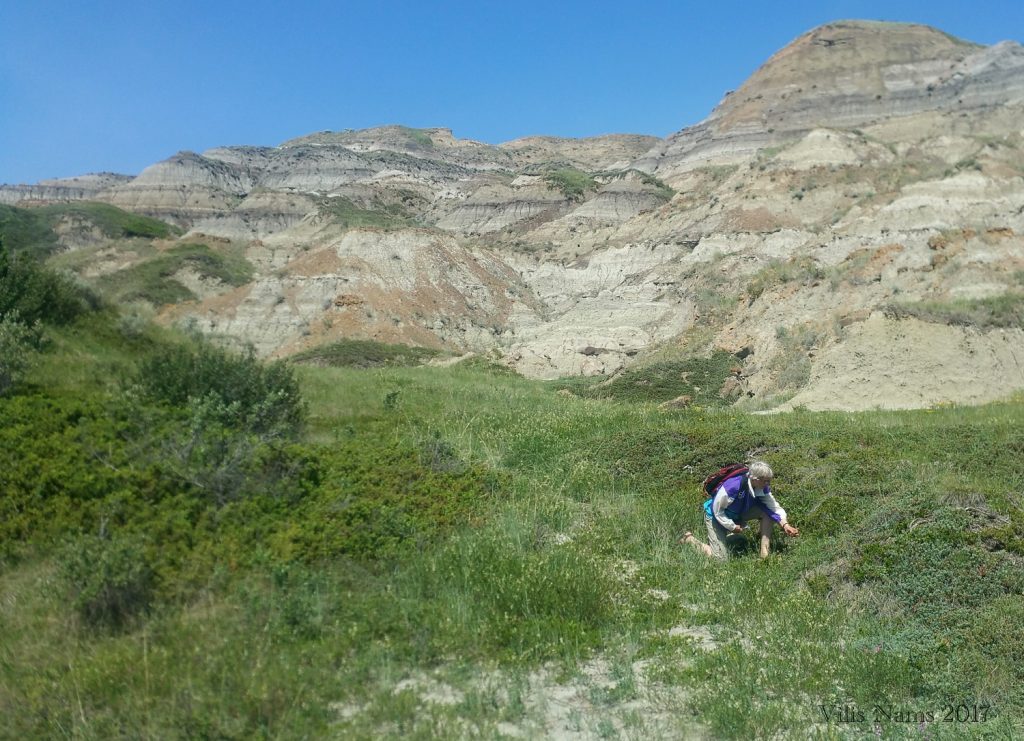 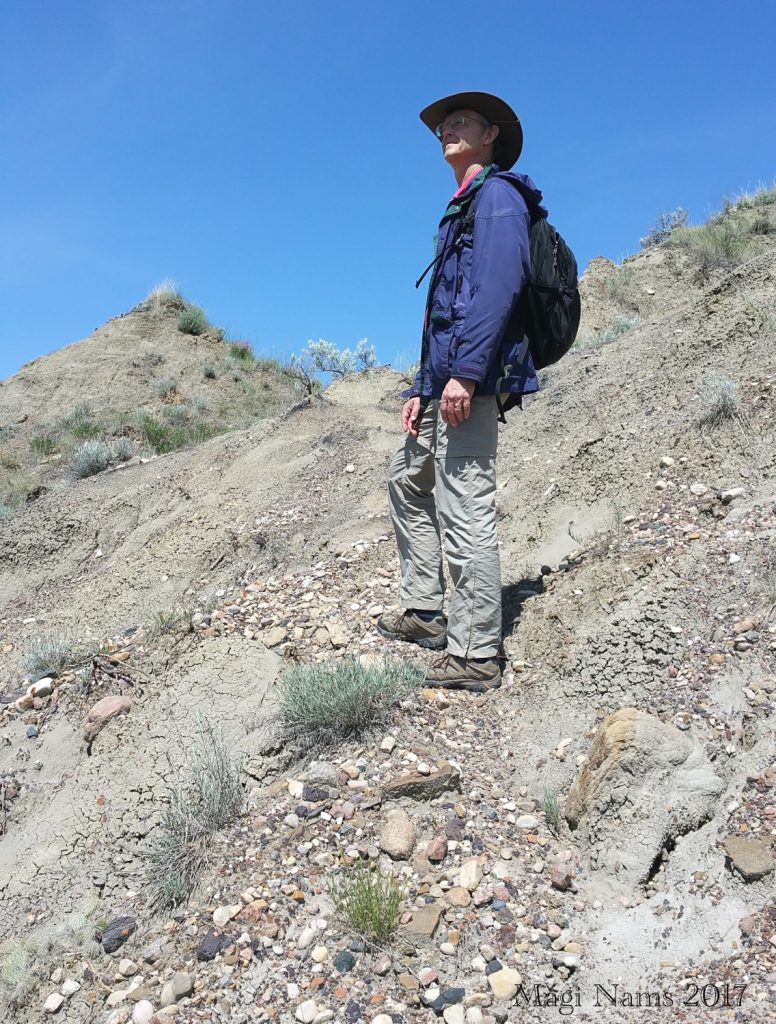 The evidence of erosion was everywhere. We stepped over holes chewed out of banks by water and walked past mini-hoodoos, that is, rock pillars shaped by wind and water erosion. Steep-walled coulees bore rills (patterns of channels) that made the walls look like drippings of clay suspended in time. On uplands, the surface of the fine soil had fractured into countless polygons. Only scattered sagebrush plants grew in that eroded habitat. Clumps of two-grooved milk vetch at the base of hill bore clusters of purple flowers that exemplified the tenacity of life set against a backdrop of relentless erosion. 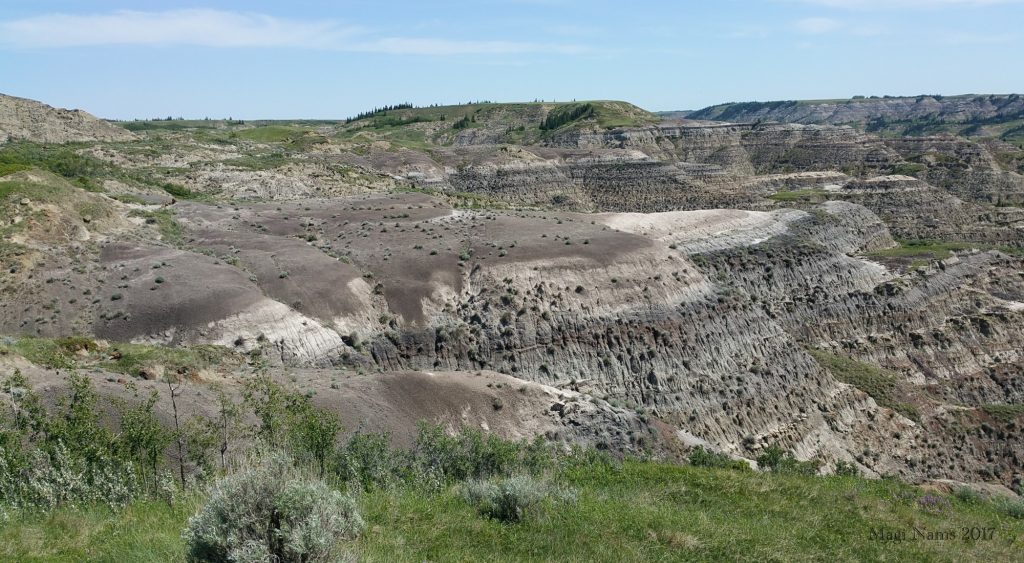 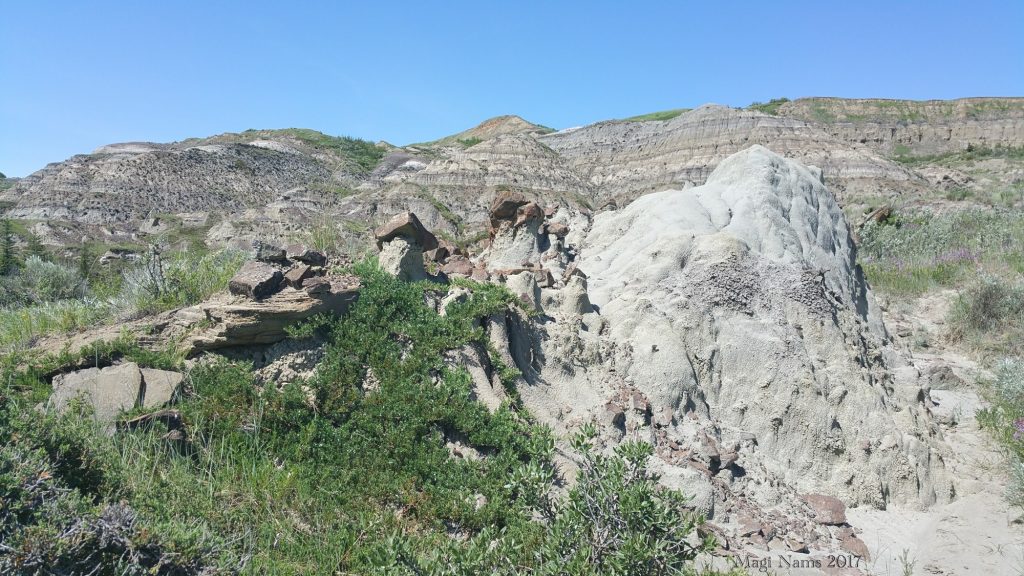 Erosion features in Dry Island Buffalo Jump Provincial Park (©Magi Nams) Note the small hoodoos at centre left and the rills on the steep hillsides in the background. 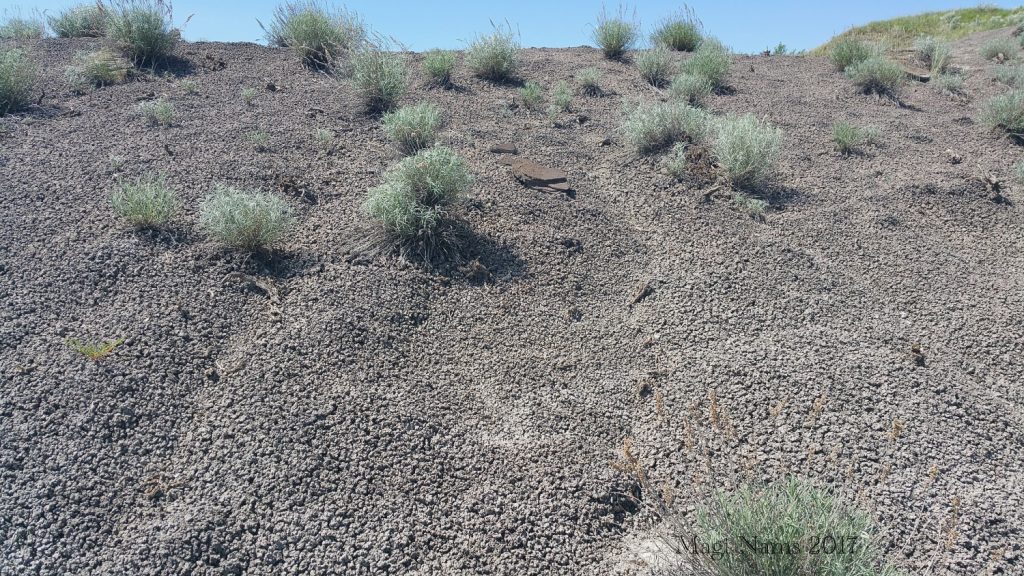 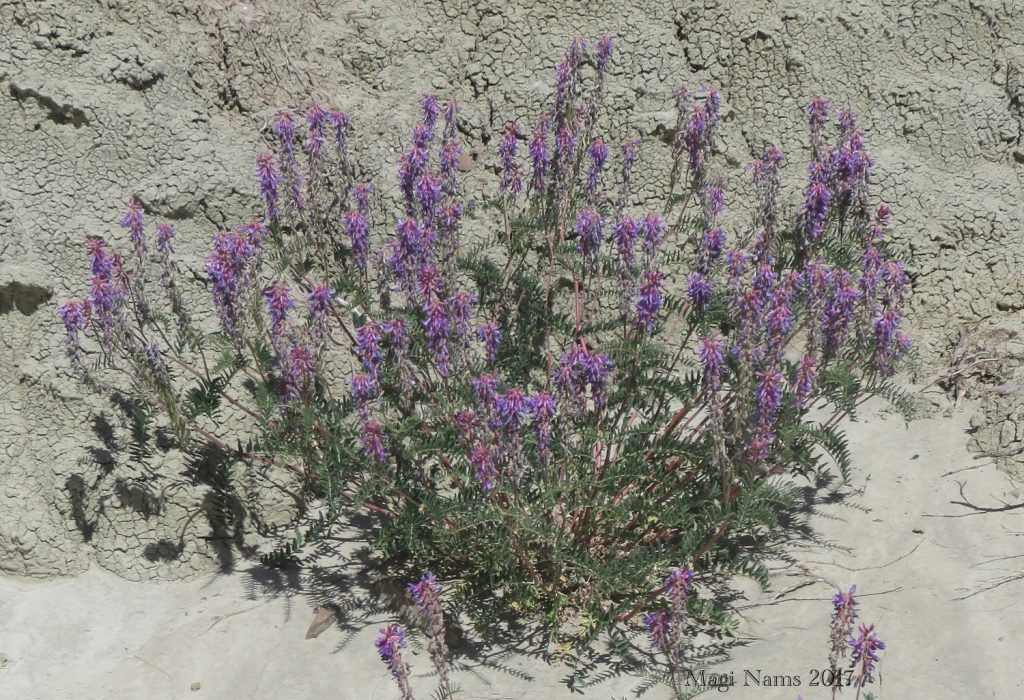 A turkey vulture flew over the badlands, its bare head small against the broad span of its grey-and-black wings. Cliff swallows soared and swooped. A rock wren, its plumage the same dusty grey-brown as the soil, perched atop an exposed hilltop and belted out its strident territorial song. That sighting was a lifer for me! A mule deer doe bounded in stiff-legged bounces out of a gully then paused to look back at us, high on a hilltop. We even found a miniature cattatil marsh, complete with resident red-winged blackbirds, tucked into a badlands nook. Deer tracks led to and from the water. 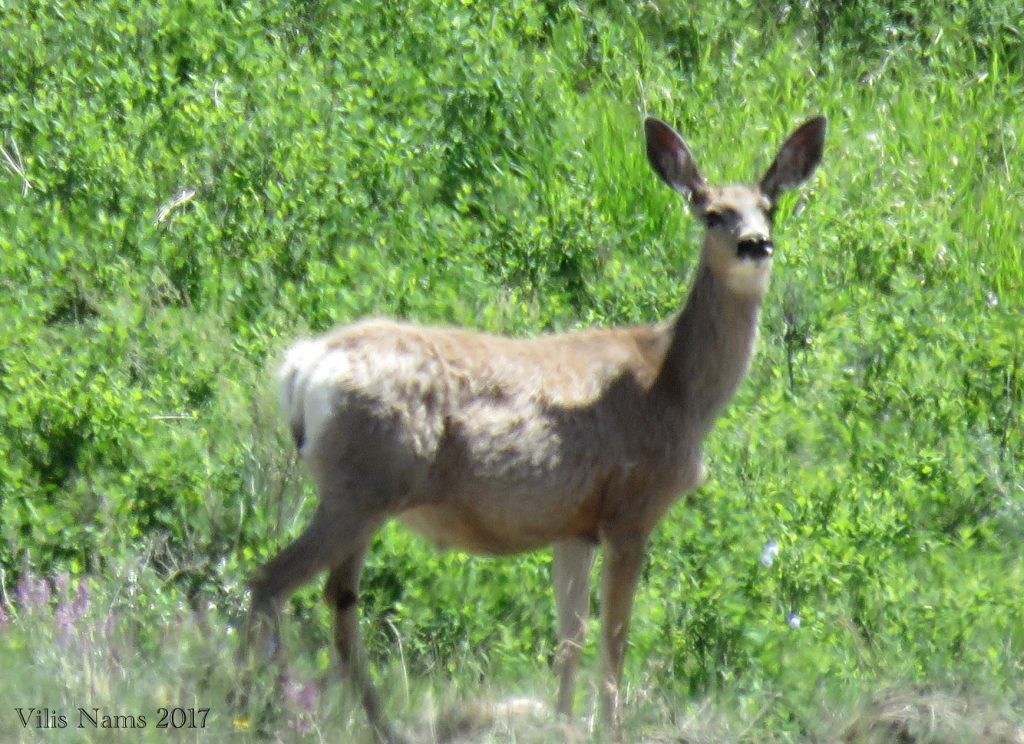 We didn’t have time to hike all the way to Dry Island, so will have to save that destination for another visit. Instead, after an hour of exploring the badlands, we hiked back toward the picnic ground on the Red Deer River. Dry, rugged terrain gave way to gentle hills and lush grassland that rolled in the wind like an emerald sea. Then we re-entered the welcome shade of the balsam poplar woodland alongside the river.

All in all, we had an excellent two-hour hike. I recommend Dry Island Buffalo Jump Provincial Park to anyone wanting a taste of Alberta’s badlands. Tap here for tips on hiking safely in that exciting landscape. Remember to go in dry weather! 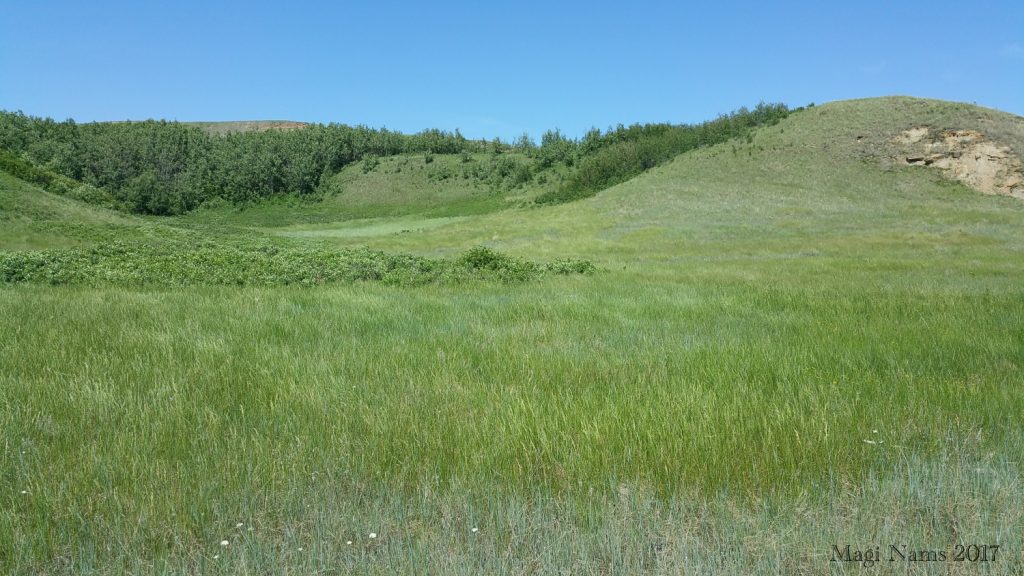 Question: Have you ever gone hiking in Alberta’s badlands? If so, I’d love to hear about your experience. You can leave a comment in the box below. Thanks!

2. The Drumheller Mail. Seven Tips  for Hiking Safely in Alberta’s Badlands. Accessed on June 17, 2017 at http://www.drumhellermail.com/tourism/12836-seven-tips-for-hiking-safetly-in-alberta-s-badlands