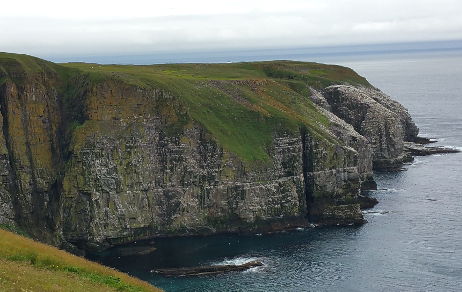 Cape St. Mary’s Ecological Reserve on the southwest tip of Newfoundland’s Avalon Peninsula offers a 1-kilometre hike that features spectacular coastal vistas and a nesting seabird hotspot. On a clear summer day the exposed headland – with its sheer cliffs, sheep-grazed tundra and cacophonous colonies of gannets, murres, razorbills and kittiwakes – is truly a wondrous sight. (Tap on photos to enlarge.) 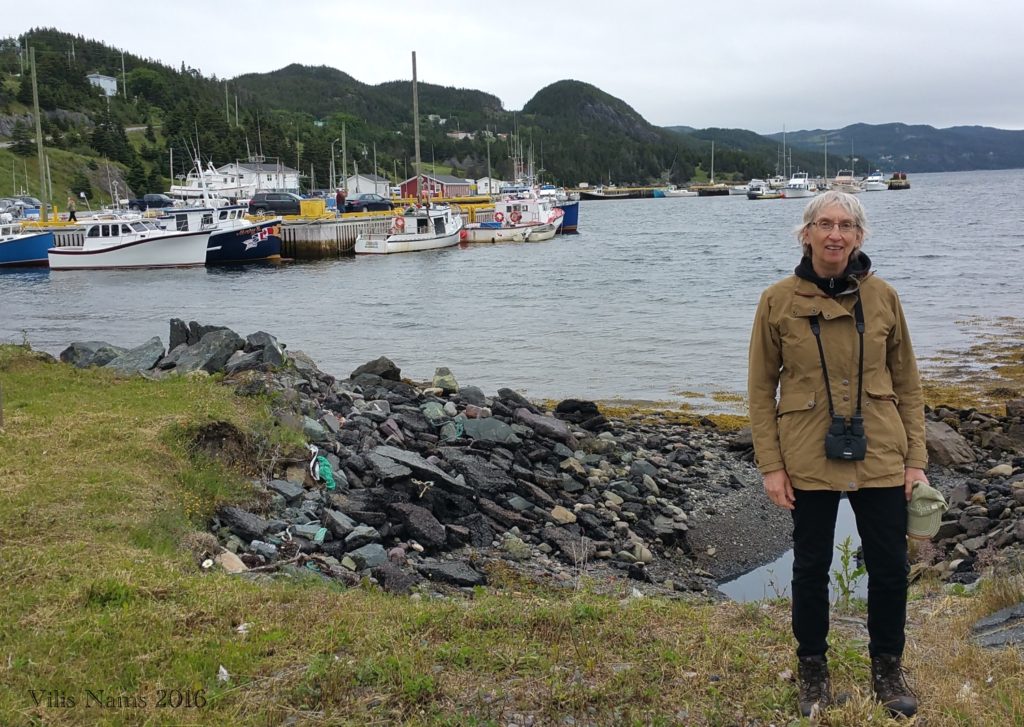 Located about 65 kilometres from Placentia  and 175 kilometres from the provincial capital of St. John’s, Cape St. Mary’s juts into the Atlantic Ocean.  The headland’s exposed location results in weather characterized by frequent rain and fog (200 days of fog per year, according to Newfoundland and Labrador’s Department of Environment and Conservation) .

Four years ago (July 7, 2012) when Vilis and I first visited Cape St. Mary’s Ecological Reserve, it was enveloped in thick fog that obliterated our view of the headland. We hiked the 15-minute trail to Bird Rock anyway and felt like we were lost in a mysterious land, with vivid green beneath our feet and ghostly wings beating the mist around us. 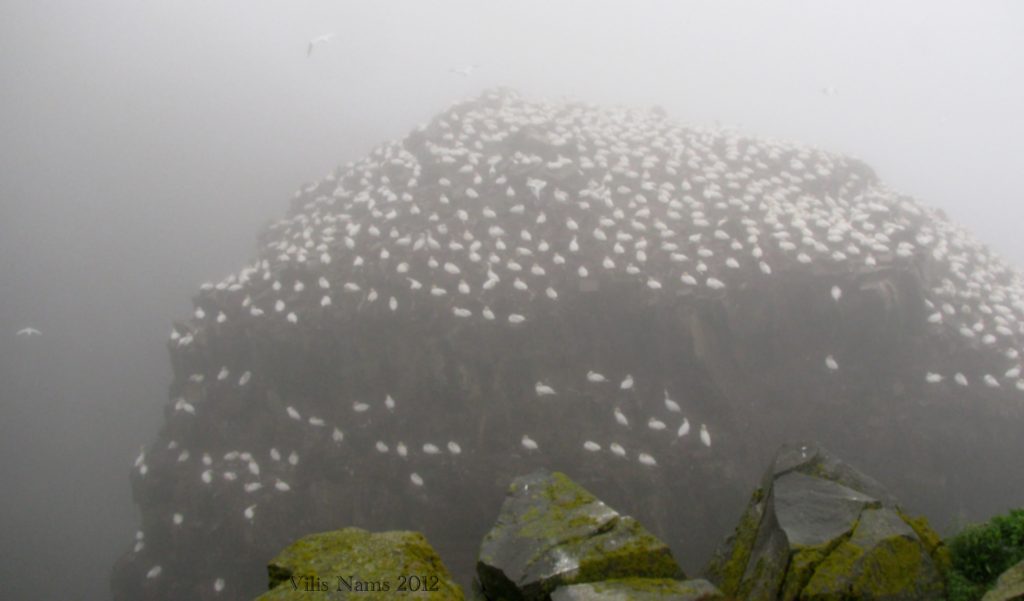 Up close to Bird Rock, we were able to discern the dim shapes of northern gannets nesting on the hundred-metre-high sandstone stack separated from the rest of the headland by a narrow chasm. About 65,000 seabirds nest within Cape St. Mary’s Ecological Reserve, including 24,000 gannets, 20,000 black-legged kittiwakes (small, graceful gulls) and 20,000 common murres (a kind of auk). As well, smaller numbers of thick-billed murres, razorbills, black guillemots, double-crested cormorants, great cormorants and northern fulmars nest within the reserve.

Earlier this week (July 11, 2016), Vilis and I returned to Cape St. Mary’s Ecological Reserve on a tour with the Canadian Society for Ecology and Evolution. Rain had just ended and there was no fog in sight, so we and a busload of other nature lovers were in for a thrill. “Wow!” I exclaimed at the visitor centre before we’d even started our hike. Far in the distance, the cliffs of Cape St. Mary’s were white with birds. This accessible coastal headland is one of the best places in the world to observe nesting seabirds. 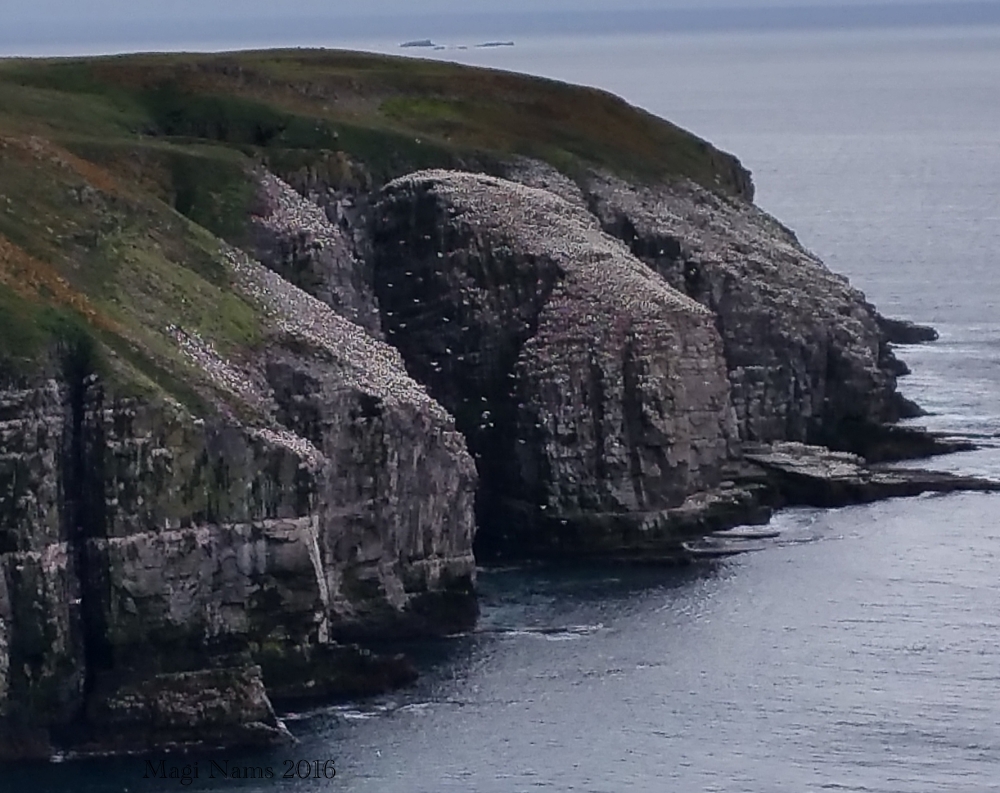 The island of Newfoundland is halfway between the equator and North Pole, but because its shores are washed by the cold Labrador Current, its climate is more arctic than temperate. Icebergs are frequently seen off the north coast in summer. At Cape St. Mary’s Ecological Reserve, we hiked over hummocky sub-arctic tundra cloaked with ground-hugging arctic-alpine plants. Wild irises and ferns grew in sheltered hollows. The reserve lies within an eco-region called the Eastern Hyper-Oceanic Barrens, with vegetation similar to that in coastal areas of southern Norway and northern Scotland. 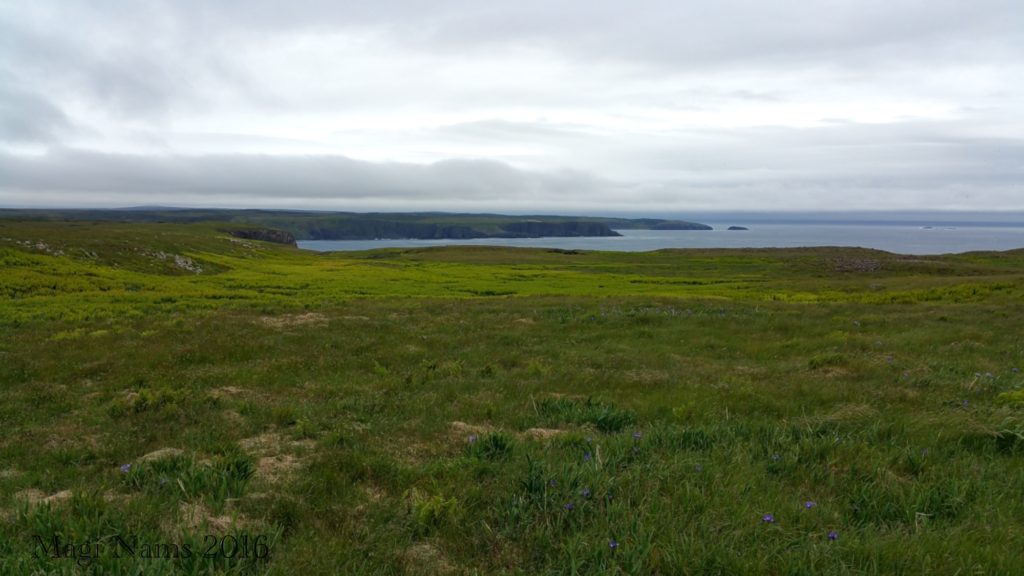 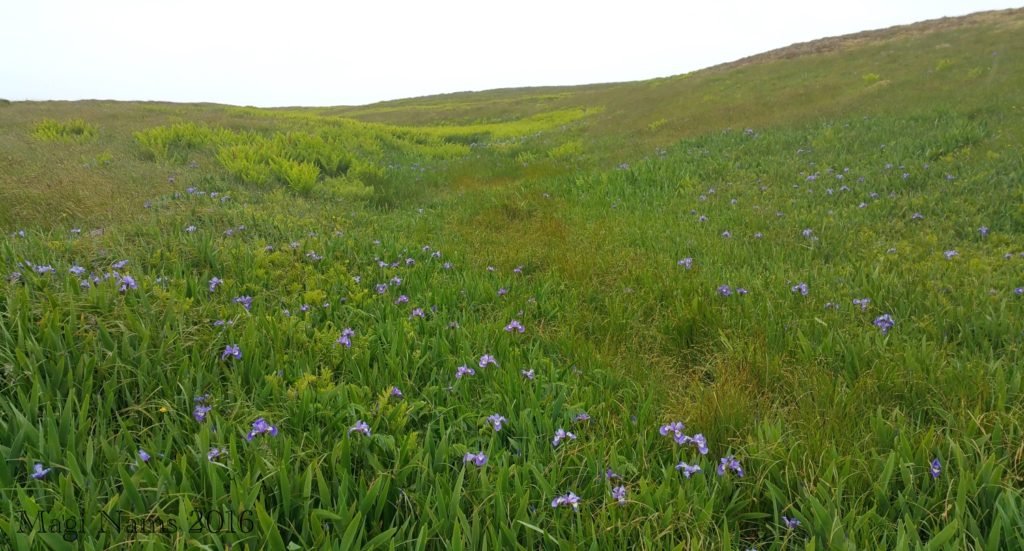 This year, we had a beautiful, clear view of Bird Rock and the other clifftop nesting sites near it. The large gannets occupied the clifftops and big ledges high on the cliffs. Kittiwakes and murres nested on narrower ledges below the clifftop (the murres had laid their eggs on bare rock, with no actual nests). A razorbill peered out from its crevice nest site. I saw kittiwake eggs and downy nestlings  and a common murre nestling huddled back against a rock face. Gannet parents regurgitated food into their young’s mouths, brought bits of vegetation to enhance their nests and performed greeting rituals, rubbing their bills together while pointing them skyward. (Sorry, no bird close-up portraits! We forgot our digital camera in our hotel room, so I only have photos taken with my mobile phone.) 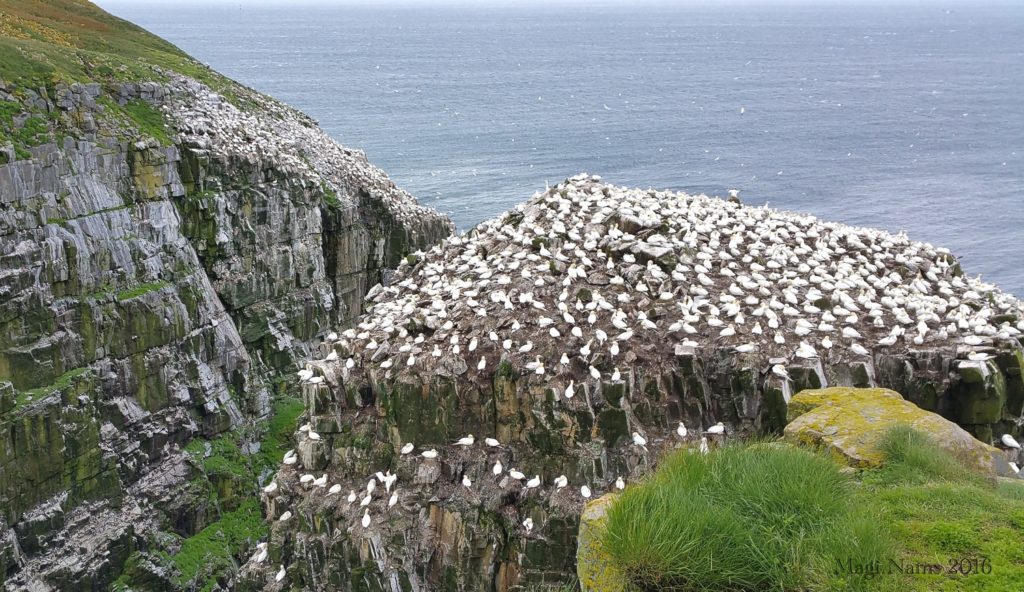 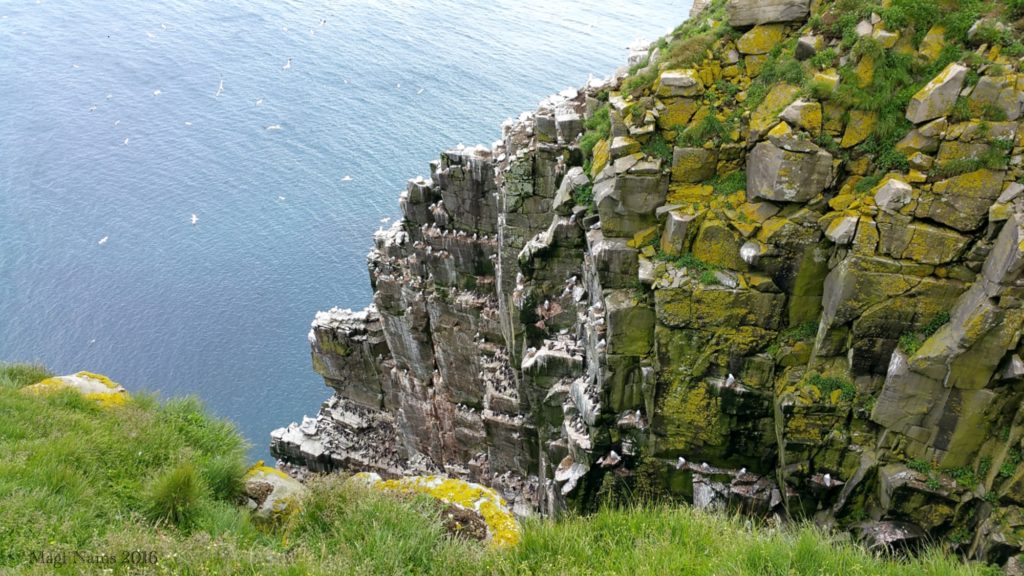 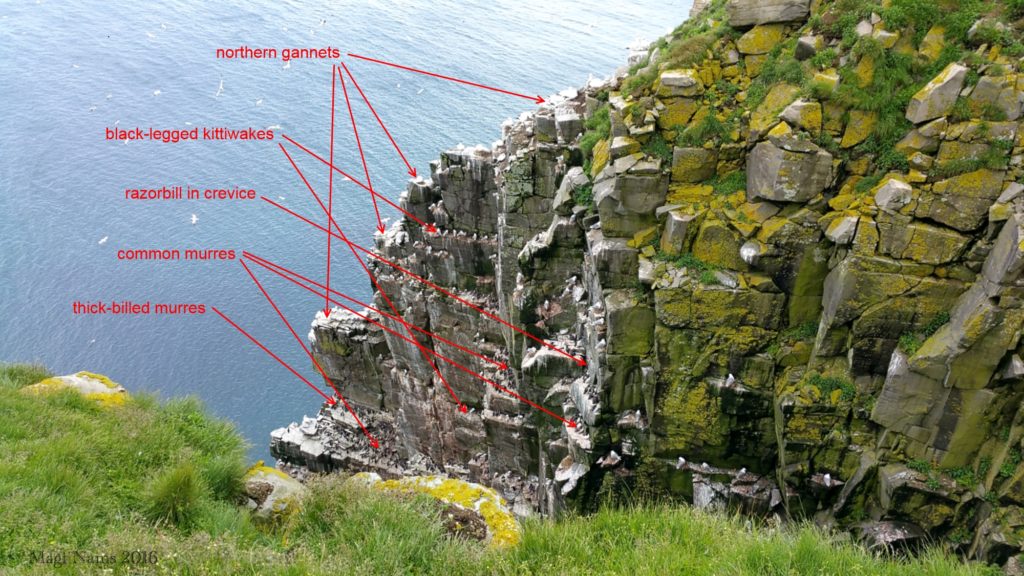 The air was filled with bird racket and birds flying to and from nests from the rich fishing grounds off Cape St. Mary’s. This time of year is caplin season, and the seabirds and a humpback whale were eating their fill of the small fish that feed in the nutrient-rich upwelling off the cape, where the cold Labrador Current meets the warm Gulf Stream. The total area of Cape St.Mary’s Ecological Reserve is 64 square kilometres, of which 54 square kilometres is ocean designated as protected in order to preserve the incredible richness of this marine habitat.

To summarize, Cape St. Mary’s Ecological Reserve is a fantastic easy hike with million-dollar views and the summertime bonus of more than 60,000 nesting seabirds. For more of the flavour of Cape St. Mary’s, listen to this clip of “Let Me Fish Off Cape St. Mary’s,” sung by the late, great Stan Rogers.

Question: What is the best short hike (30 minutes or less) you’ve ever taken? To reply, leave a comment in the box below.