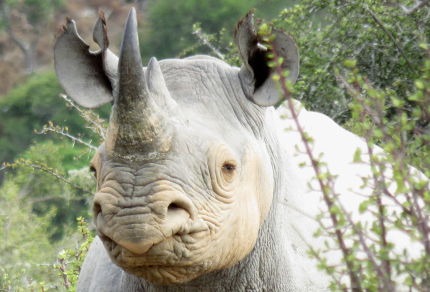 As guests of wildlife enthusiasts, Adrian and Cheryl Craig, Vilis and I visited Great Fish River Reserve yesterday, December 17 and were privileged to see several black rhinos. Black rhinoceroses (now often referred to as hook-lipped rhinoceroses) are considered one of the world’s most endangered mammal species. (Tap on photos to enlarge.) 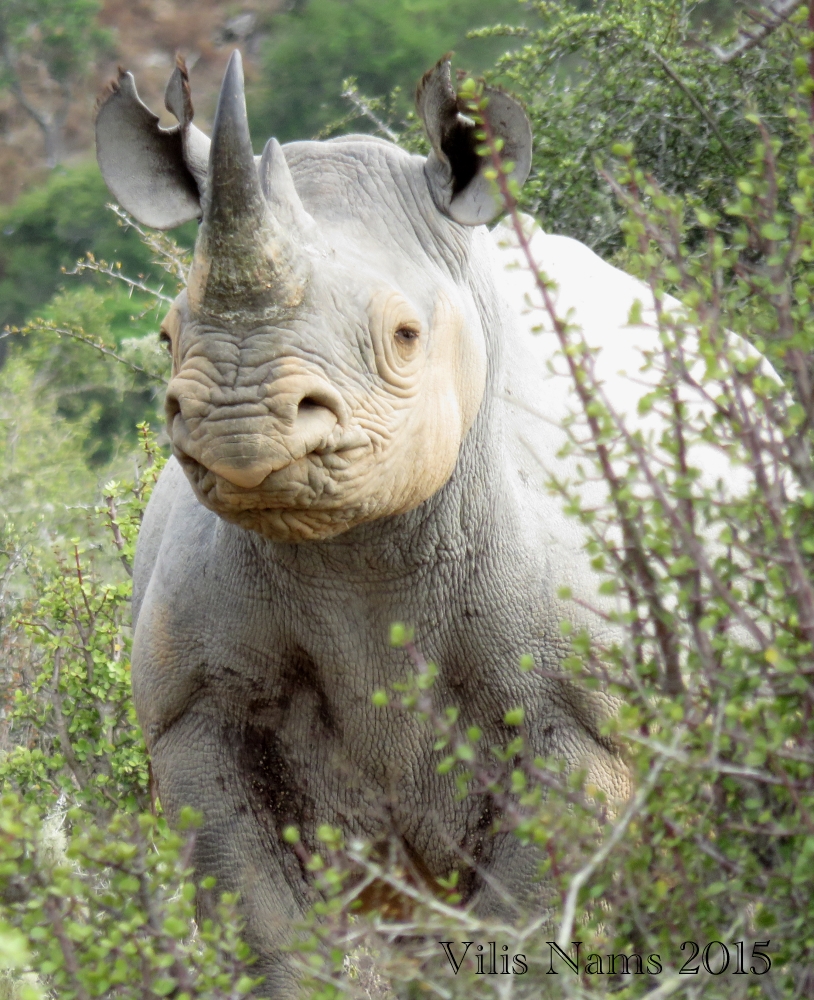 Adrian mentioned that Great Fish River Reserve is an amalgamation of three former reserves spread over 50,000 hectares and has 50 kilometres of the Great Fish River winding through its thicket-covered hills and plains. Located 40 kilometres north of Grahamstown, the reserve was once the site of bloody territorial disputes between the Xhosa people and white settlers in the nineteenth century. Now it’s a haven for wildlife, including a growing population of black rhinos.

We entered the western gate of the reserve shortly after 6 a.m. – prime game viewing time. We soon spotted red hartebeests in the scrubby vegetation and then a female ostrich and two chicks. The young birds raced along the road, their striped necks erect, their fluffy back feathers tossing with every step. We paused at Kentucky Hide on the shore of a large dam. From the hide, we could see Egyptian geese, red-knobbed coots, yellow-billed ducks, red-billed teal and many chittering little grebes (dabchicks) on the water. I had my first sighting of a malachite kingfisher, its brilliant blue plumage and sharp red bill lit by early morning sunshine. And Vilis and I had our first sighting of a hook-lipped or black rhinoceros on a hill on the far side of the water. The rhino sprayed urine as a scent mark, indicating that it was a male posting its territory or a female spraying to indicate her receptiveness to males. 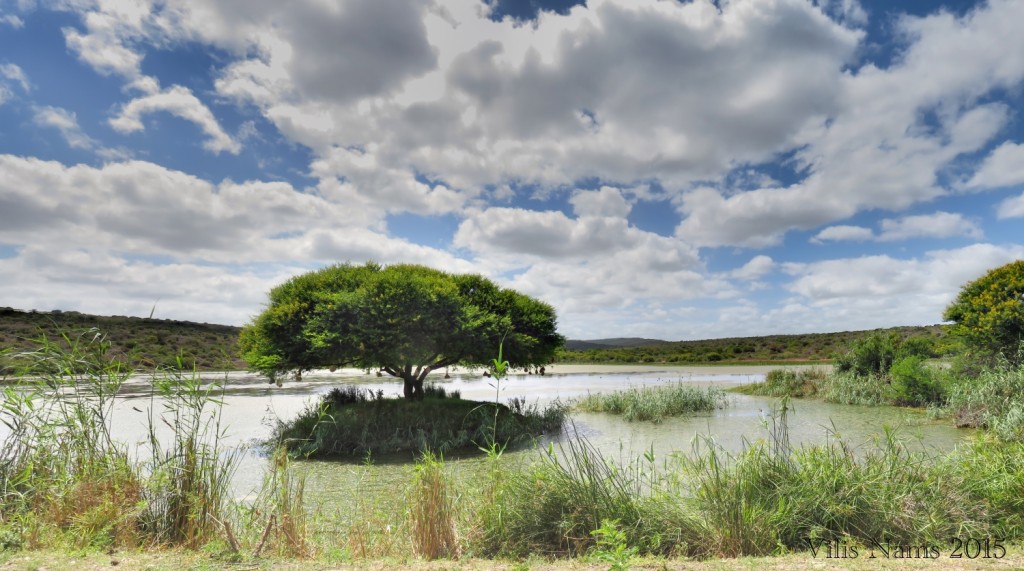 We decided to return to the hide later and continued our game drive. Much of Great Fish River Reserve is vegetated with dense spekboom and acacia, making it difficult to spot wildlife, but we did see kudu, steenbok and red hartebeest in the thicket and a gorgeous steenbok ram foraging on an open, grassy plain.

Often, wildlife sightings came suddenly. A scrub hare bounded across the road. Two adult buffalo and a calf stood on the road ahead of us when we turned a curve. I spotted a rhino about 25 metres from the road (see above photo), and we stopped to watch it. I was struck by how much smaller the black rhino’s head was than those of the white rhinos we’d seen in Sibuya Game Reserve and Kruger National Park.

The rhino was just as curious as we were. It moved closer, out into the open, and we could clearly see its hooked lip, wrinkled skin and mud on its face and body, from wallowing. Again it moved closer, with its head high as it tried to make out what the large object on the road was (rhinos have very poor eyesight). Ten metres away from us, the rhino made two brief charges. By that time, I was leaning farther and farther away from the car door, envisioning a rhino horn stabbing through it. As soon as Adrian turned the ignition and his SUV’s engine roared to life, the rhino wheeled and trotted into the bush. For such a large, bulky animal, it moved with a surprising lightness of foot.

Blooming “mimosa” acacias cast a yellow blush over the landscape. Again we rounded a corner and made a surprise discovery – a third black rhino at the edge of the rough track we were driving, uphill from us. As we watched it, it snorted twice, blowing moisture sideways from its nostrils. Massive and powerful, it loomed over us then walked into the bush. We crept uphill, past the rhino and another rhino near it. Adrian speculated that the two might be a breeding pair. 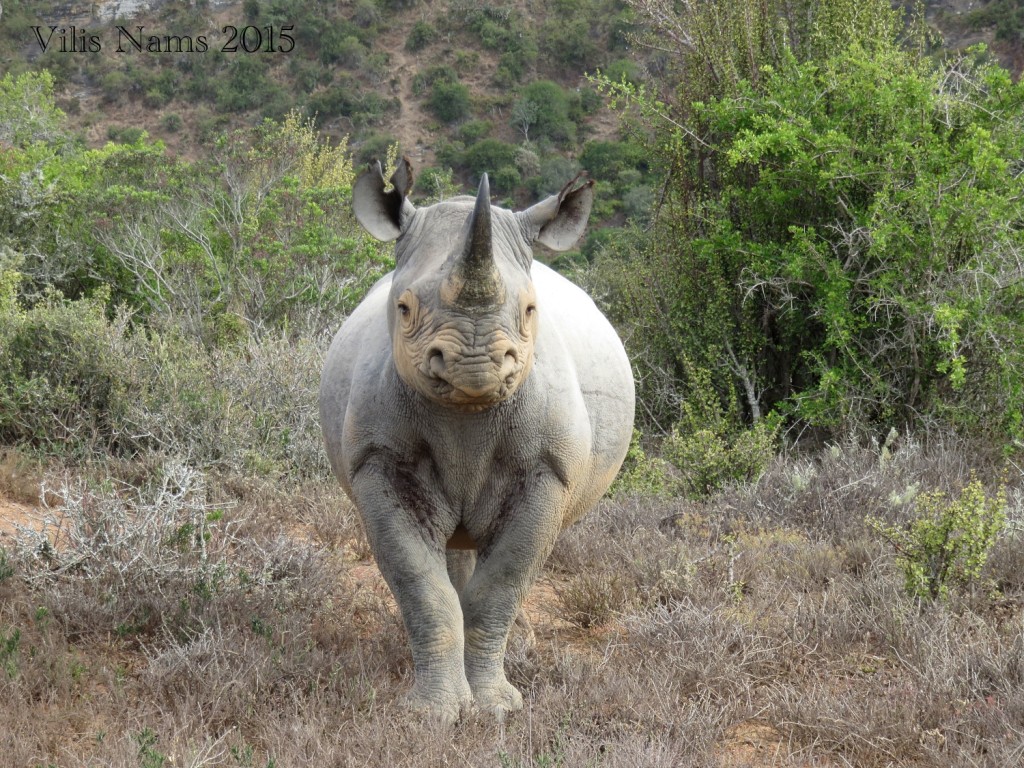 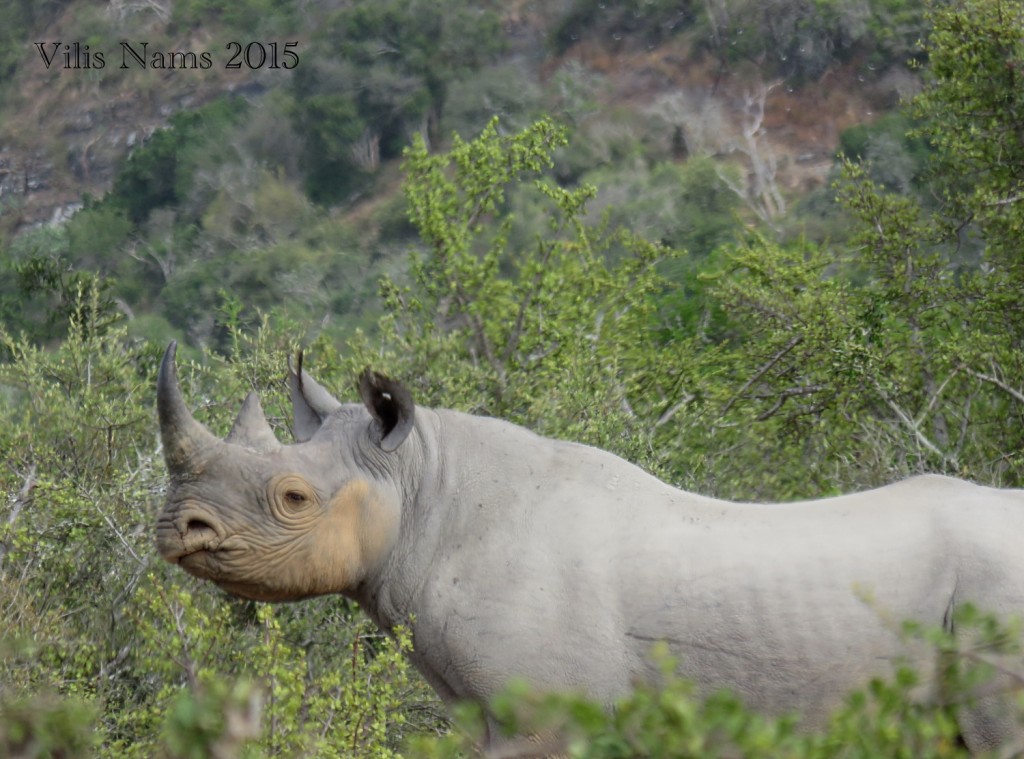 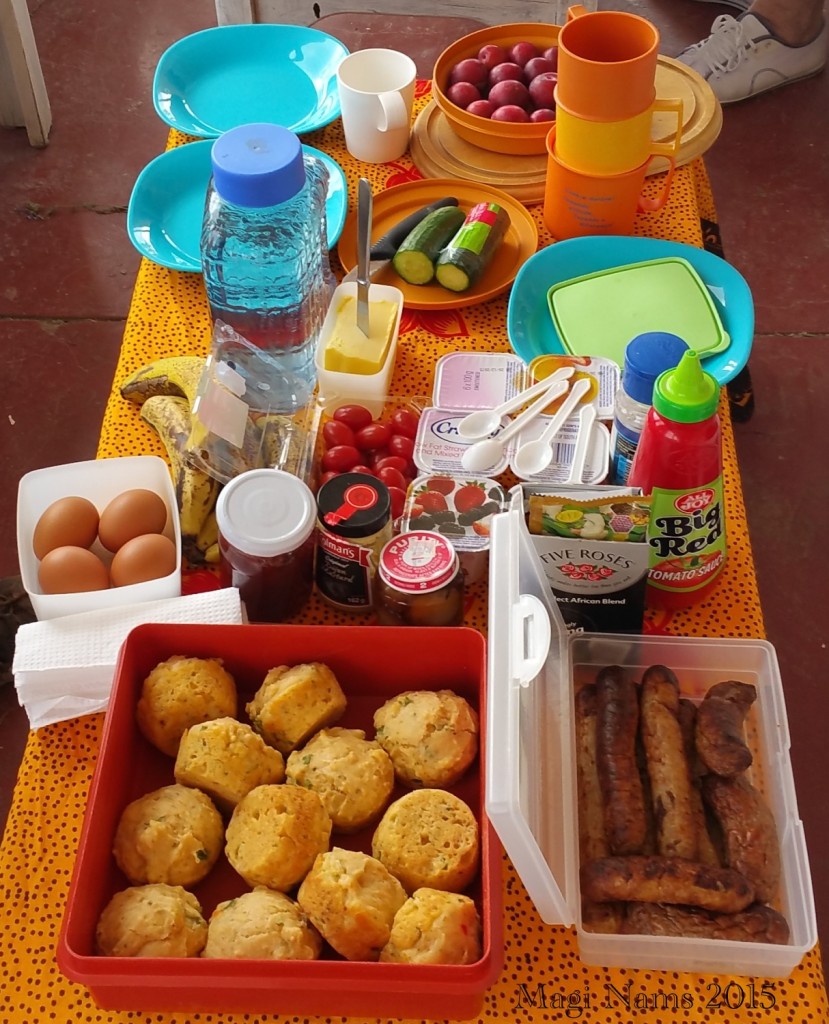 In mid-morning, we paused for a late breakfast on the porch of what was once a homestead called Grasslands but is now the Basil Kent Research and Education Centre. Cheryl unpacked a mouthwatering array of cold foods, including homemade savoury muffins and spiced plum jam. We feasted and relaxed and gazed out over the reserve. We’d seen only one other vehicle during the morning, and it had belonged to Eastern Cape Parks, the provincial organization that manages the reserve. Unlike our experiences in wildly popular Kruger National Park and Addo Elephant National Park, it seemed as though we had Great Fish River Reserve to ourselves. Wonderful!

After breakfast, we wound our way back to Kentucky Hide and sat quietly within the shelter. We watched a small herd of red hartebeests and two kudus make their way down a hill to the water to drink. Vilis spotted a huge water monitor swimming in the dam, and Adrian likened it to a small crocodile. Three African spoonbills foraging on the far side of the dam dipped their long, pink bills in the water as they waded. A grey heron stood frozen in the shallows. As we scanned the hillside where we’d seen the first rhino, we noticed four rhinos, several kudus, two warthogs and a small herd of eland. Soon, the air was split by the yipping and howling of black-backed jackals. Great Fish River Reserve was putting on quite a show for us! There have been days in South Africa when Vilis and I have been showered with gift after gift. Yesterday was one of them. 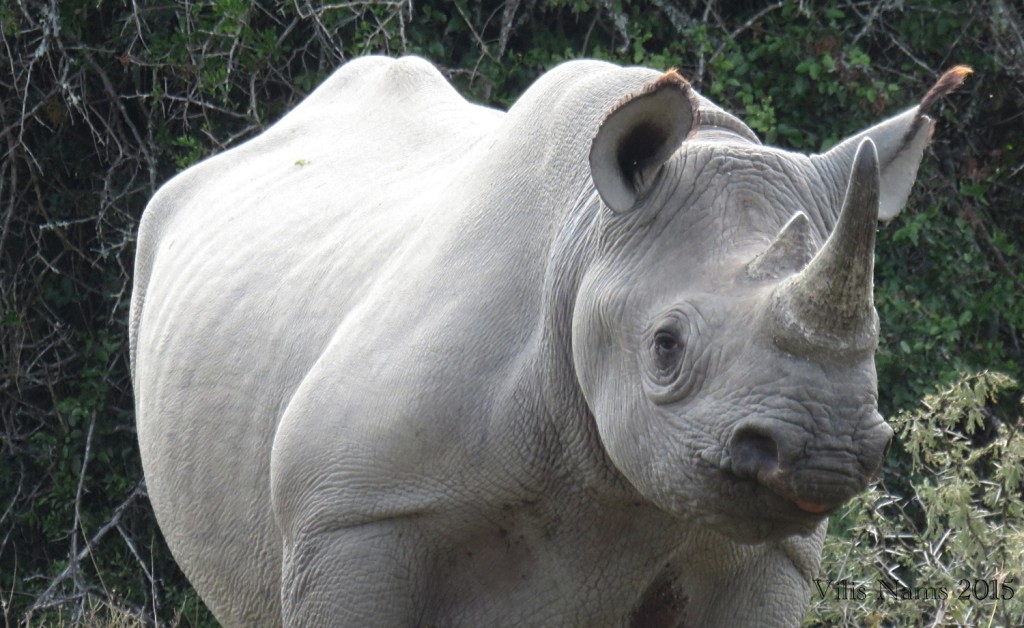