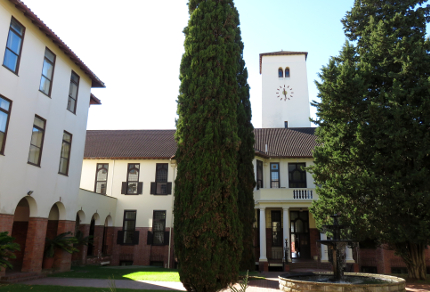 My first impressions of Grahamstown, South Africa, are conflicting. On one hand, the Eastern Cape hub town is home to a world-class university, hosts an annual national arts festival and boasts stunning colonial architecture. On the other hand, security is sky-high and townships exude poverty.

At dawn this morning, the raucous calls of Hadeda ibises in flight rang out over Grahamstown. By 7:30 a.m., the mid-winter darkness had given way to brilliant sunshine. Heavy dew sheeted the cobblestone sidewalks beneath my feet and gleamed like a silver shawl draped over Rhodes University lawns and playing fields. For the first time, I ran on African soil, my breath puffing into cool, damp air as I jogged uphill on Prince Alfred Street and then wound my way through the university campus and back to our apartment. The academic term had ended on Friday, so the campus was much quieter than on our arrival last week, when students were still in attendance and writing exams.

After a week of living in Grahamstown, I’m filled with conflicting impressions of this Eastern Cape hub town. On one hand, it’s home to world-class Rhodes University, hosts the annual National Arts Festival (“11 Days of Amazing,” according to banners all over town) and features some stunning colonial architecture. (Tap on photos to enlarge.) 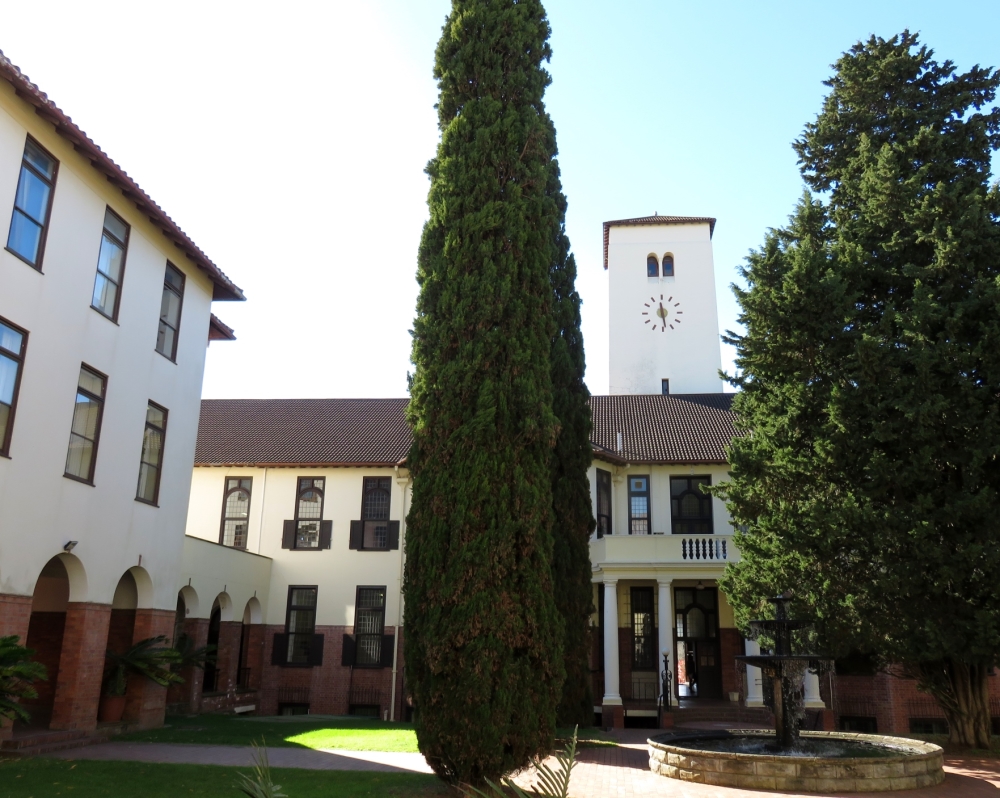 On the other hand, nowhere else have I seen so many security officers on a university campus, in stores and around town. “Even though it’s safer on campus, you must keep everything locked up,” we were told by the campus housing director. Most campus buildings are not walled in, but many have security bars or grills on doors and windows (as does our apartment). When Vilis and I drove through up-scale residential areas on Saturday, we noticed that the majority of yards were enclosed by walls or fences, most topped with spikes, electric fencing or razor wire. Some warned of “armed response” and others advertised guard dogs on duty. Homes in poorer housing areas showed much less overt security. We didn’t venture into the poverty-stricken townships. My travel guidebook advises visitors to only enter a township in the company of a guide. 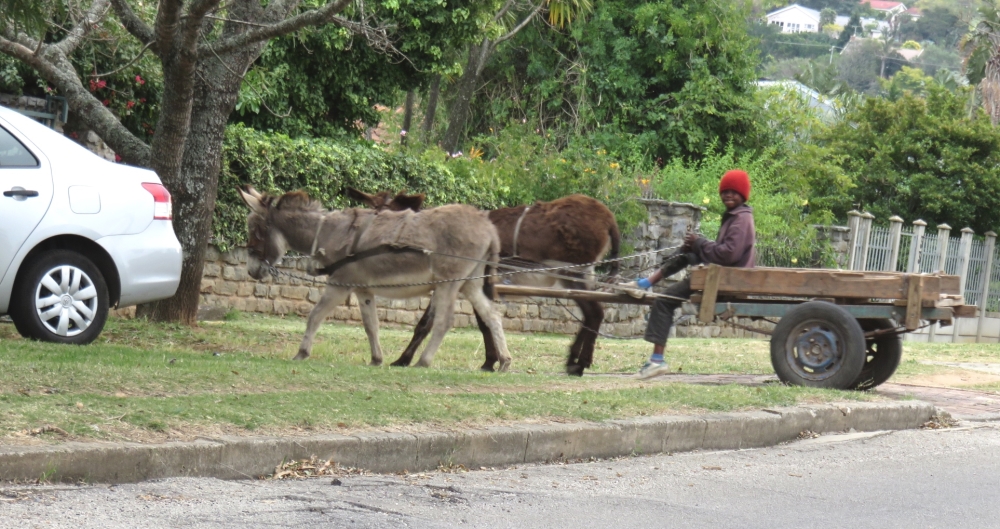 The 1820 Settlers National Monument near Rhodes University, in the town’s southwest corner, offers a great vantage point to look out over Grahamstown, which was founded as a British military outpost in 1812. 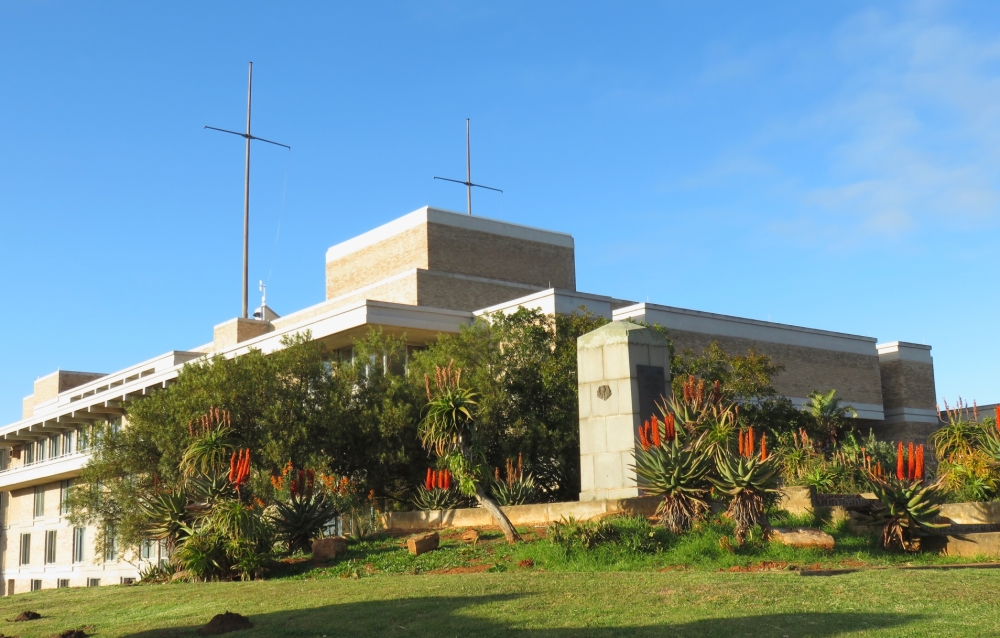 On a map, the town is shaped like a ragged spearhead. In reality, it sprawls over a valley and surrounding dry hills. The broad pavement of High Street, the town’s commercial centre, is clearly visible from the monument. The street was originally built wide enough so that ox teams pulling wagons had space to turn around. 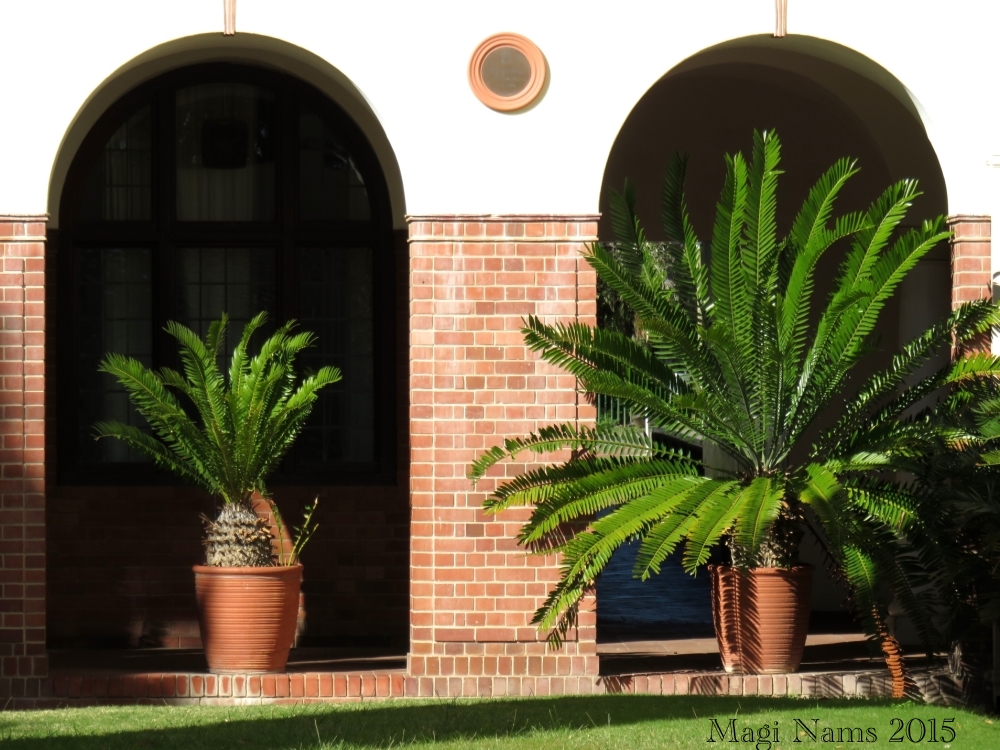 The town, and in particular, Rhodes University, is graced with an intriguing array of street plants that includes cycads, palms, aloes, jade plants, eucalypts, bunya pines (which produce 10-kilogram cones), figs and many other plants I don’t know. During the day, the cooing calls of speckled pigeons, Cape turtle-doves and laughing doves fill the air, and gloriously-coloured sunbirds feed on the nectar of flowering trees, shrubs and aloes. Houses and buildings are mostly pastel-coloured and built with thick cement, brick or stone walls, presumably to withstand the summer heat. Here and there, cattle wander the streets. 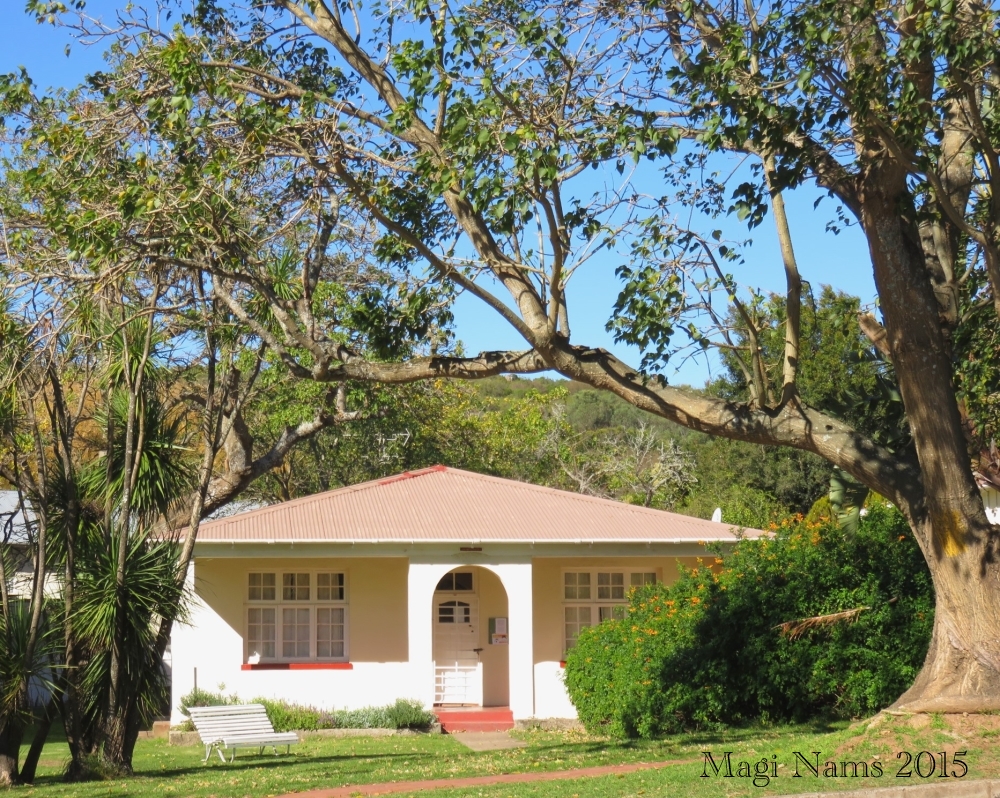 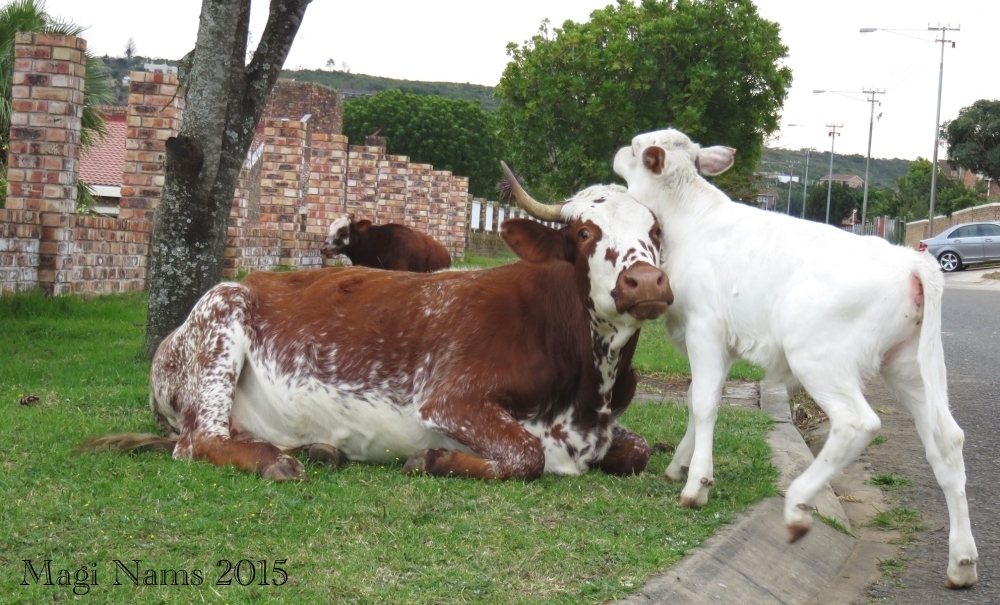 And then there are the people, a vibrant mix of nationalities, but predominantly black South African. The prevalent fashion seems to be “anything goes,” and knitted hats are popular, likely for warmth at this time of year. On campus, I sometimes hear workers singing, their voices deep and rich. Each time Vilis and I shop for groceries at the Pick N Pay supermarket in Pepper Grove Mall, it’s a hive buzzing with action. Shoppers crowd the aisles. Loud voices ring out. Women’s hairstyles are mesmerizing. Foreign words flow past us. We hand the packer our recycled shopping bags, pay our hundreds of rand (ten rands to a Canadian dollar) and carry our bags home as dusk steals light from the sky. These are my first impressions of Grahamstown. 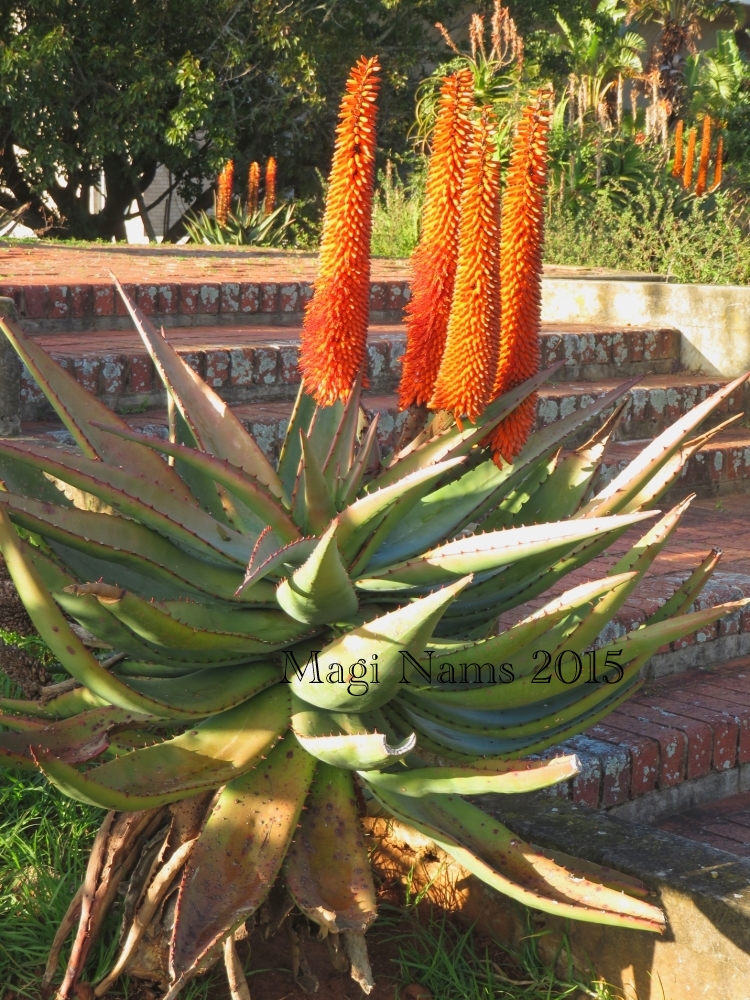