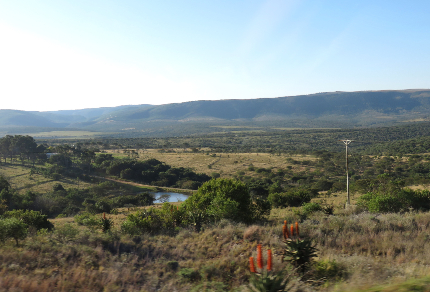 Destination: Grahamstown. A six-month soujourn in South Africa to study big cat movements begins with flights to London, Cape Town and Port Elizabeth, followed by a drive through Eastern Cape veld bright with blooming aloes to Rhodes University in Grahamstown.

At 11:59 p.m on June 21, Vilis and I flew out of Halifax, Canada, en route to Grahamstown, South Africa, where Vilis would conduct research into the movement paths of South Africa’s big cats: lion, leopard, cheetah. Three flights took us to London then Cape Town and then Port Elizabeth, the closest major airport to Grahamstown.

Our first sight of Africa came when the jet dived beneath cloud blanketing the South Atlantic, revealing a serrated ridge of peaks tracing the Cape Peninsula near sprawling Cape Town, the legislative capital of South Africa.1 The peak of Table Mountain, one of Africa’s iconic sights, was obscured by a crown of purple-grey cloud shot through with sunlit white.

In Cape Town International Airport – its walls lined with photographs of Nelson Mandela, the founding father of South African democracy2 – we hurried through Passport Check and Customs and re-checked our bags before racing through the quickest Security check ever in order to make our connecting flight to Port Elizabeth. All the while, my ears absorbed the melodic sounds of South African accents speaking English and other languages. South Africa has eleven official languages: Zulu, Xhosa, English, Afrikaans, Pedi, Ndebele, Sotho, Setswana, siSwati, Venda and Tsonga.3

As our third jet taxied down the runway, I saw distant mist-shrouded peaks. From the air, I caught glimpses of agricultural fields near the coast as the pilot banked the plane. Inland, parallel mountain ranges stretched northeast, with long, mist-shrouded valleys between them. Port Elizabeth appeared as a glint of reflected sunlight veiled with haze at the edge of the green Indian Ocean. As the jet circled before landing, we saw lush fields and dry hills vegetated with scrubby bush. As we exited the plane, we were struck by how bright the South African light is, like in Australia.

We had one more step in our journey to reach destination: Grahamstown. We rented a car to drive the last 130 kilometres. In Port Elizabeth, we noted umbrella trees and palms in plantings and a huge ship offshore. The shoreline was bolstered by huge cement dollosse and by massive boulders. Tile roofs of brick and cement houses scintillated in the bright sunlight. 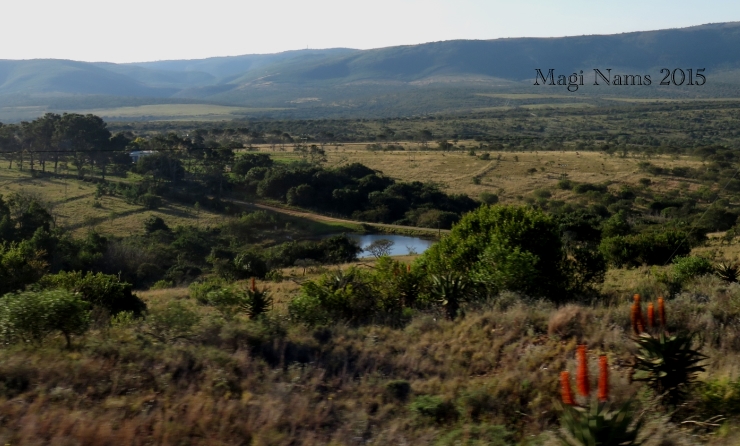 Closer to Grahamstown, lush bottomland fields were interspersed with shrubby pastures, the latter grazed by small herds of Jerseys and other dairy cattle. Forty kilometres from Grahamstown, we drove into wooded hills that gave way to more scrubby rangeland. Several signs warned of antelope crossing the highway, and we passed an “Elephant Sanctuary” sign. Seeing those signs brought home to me the fact that we had truly arrived in Africa.

Exhausted from jetlag and two nights of fitful sleep onboard Air Canada and British Airways jets, we made our way to Rhodes University and met Vilis’s contact. Dan welcomed us and showed us to our campus accommodation, a very basic one-bedroom, ground-floor apartment with two-foot-thick cement walls, barred windows and three locks on the only door. He’d brought us a few basic food supplies, and his wife had insisted on a vase of flowers. Their bright lemon-yellow welcomed us to our destination: Grahamstown, South Africa.