Six Months in South Africa: Dassie Krans in the Mist 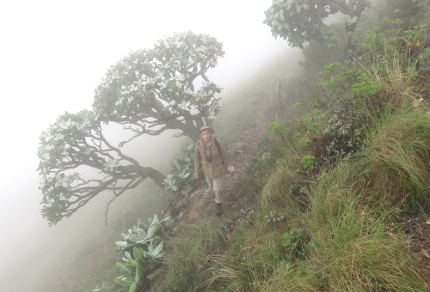 Located near Grahamstown, the short Dassie Krans loop trail is a hidden gem. Contorted Protea shrubs edge a rocky precipice that plunges into an African jungle of tangled lianas and lush groundcover.

During Grahamstown’s cold and unusually wet winter, the weeks seemed to drag by. That may have been related to the fact that the tiny, cement-walled apartment in which Vilis and I reside at Rhodes University was consistently frigid and dank. While at my writing table in the living room, I bundled up in five layers of clothing, wore fingerless gloves and crawled into my sleeping bag to try to stay warm. And that was with two electric heaters on! Some days, I succeeded. Now that the South African spring has arrived, the weeks seem to pass too quickly. Fortunately, there’s no shortage of outdoorsy things to do in the Grahamstown area. 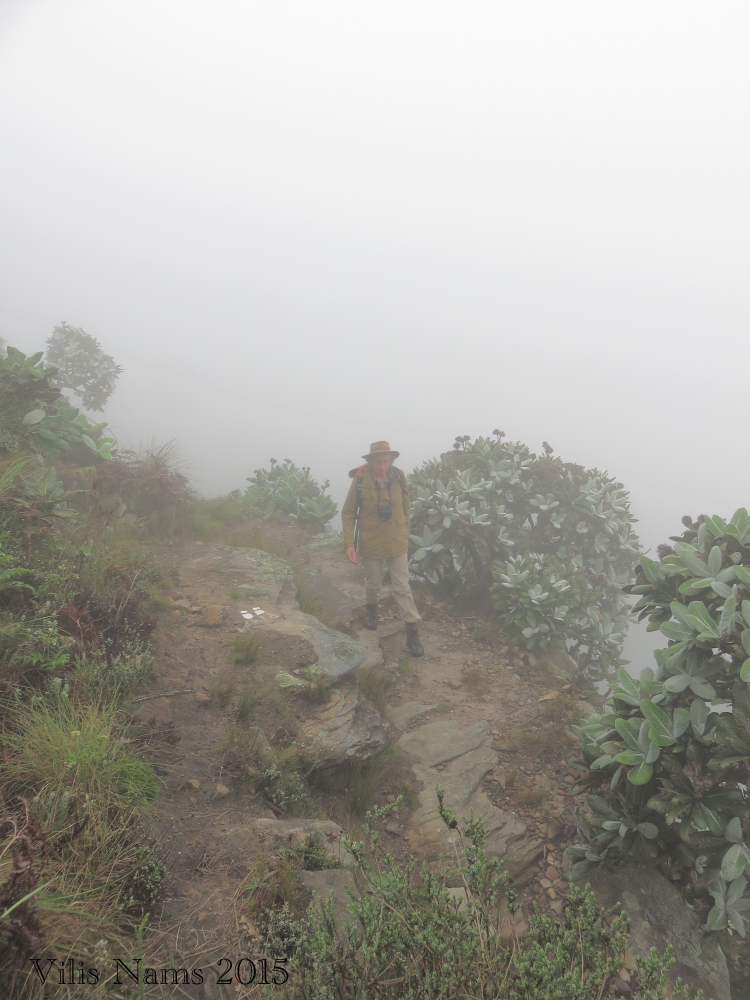 On September 26, Vilis and I discovered a little gem in Grahamstown’s Southern Commonage – Dassie Krans. Dassie is the common South African name for a hyrax, which is a plump, tail-less mammal that looks somewhat like a guinea pig. A krans is a cliff or precipice in the Afrikaans language spoken throughout much of South Africa. So, Dassie Krans is a rocky precipice where hyraxes live.

Mist shrouded the commonage’s long, high ridges and drifted across Mountain Drive as we passed by dog walkers and runners on our way to the short Dassie Krans loop trail (~1 kilometre long). Subtle shades of green, highlighted by yellow and dusky rose wildflowers, warmed the Rietberge fynbos, as little of it as we could see. At the trailhead, communication towers loomed over us, their tops lost in mist. Pied crows winged past, like cloud-masked sentinels.

Giant South African millipedes slithered over the rocky trail as we made our way through low, dense, tangled vegetation that reminded me of the barrens on Nova Scotia’s rocky shores near Peggy’s Cove. The trail led us to the cliff edge, where we looked down onto dark, rounded shapes that seemed to be floating in white. Nearly invisible, the forest at the base of Dassie Krans exuded mystery. Bird songs were sharp flecks of sound in the thick, wet air. Unfortunately, we didn’t see any dassies. We didn’t even see much of the cliff. 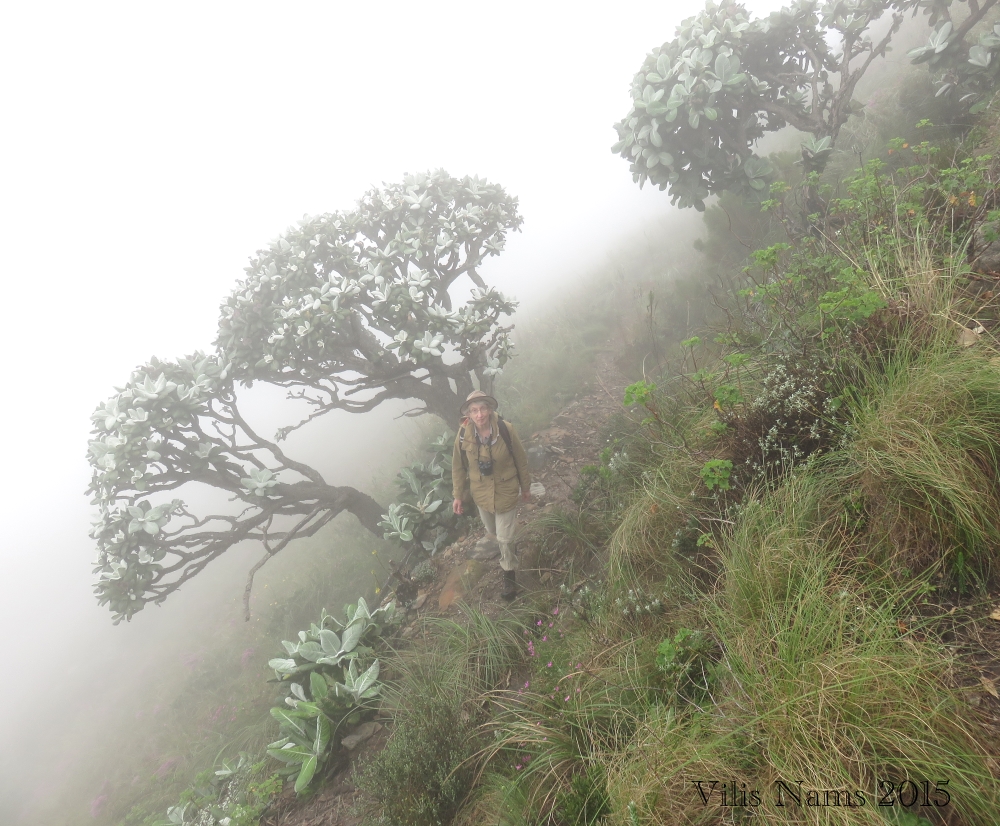 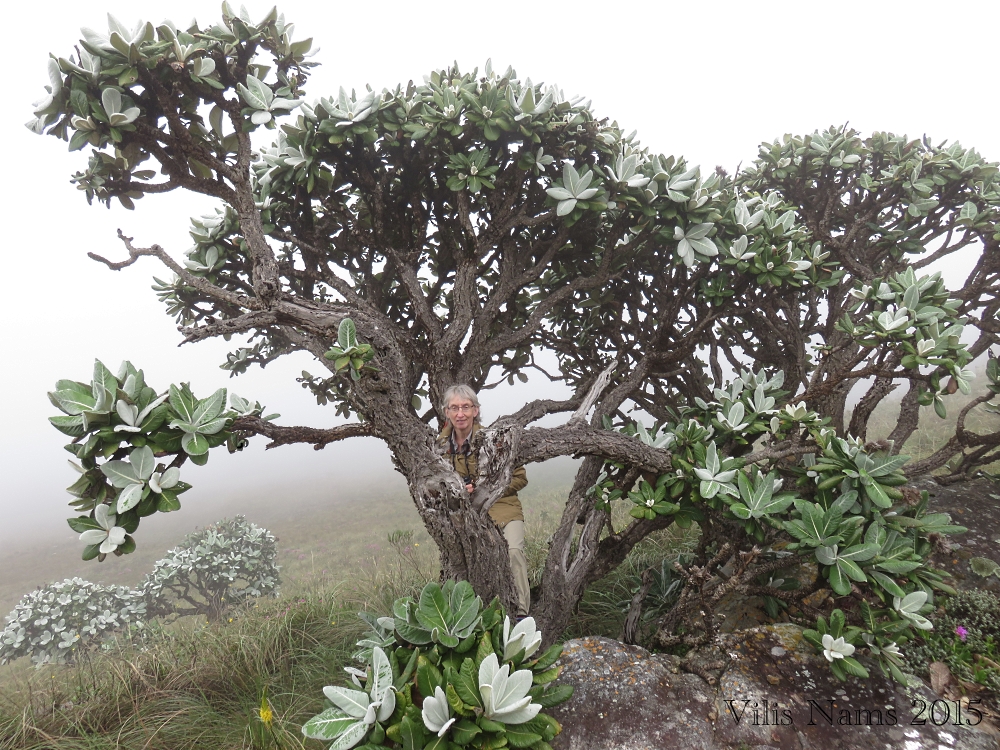 The trail zigzagged down a lush, south-facing slope. Switchbacks led us through heaths and dense curving grasses that snagged my boots. Geraniums grew wild among the rocks and grasses. Slanted protea shrubs hugged the edge, their new leaves pale, fuzzy, and coated with water droplets.

A cold breeze followed us down the steep incline and into bracken and shrubs growing at the base of Dassie Krans. Then the trail led us into that mysterious forest we’d seen dimly through mist, from the clifftop. Its floor was a bed of green comprised of mounds of wet herbaceous plants and trailing ground covers that looked very much like peperomia and ivy. Tangles of vines and lianas hung from trees. “It’s an African jungle,” Vilis said, with wonder in his voice. 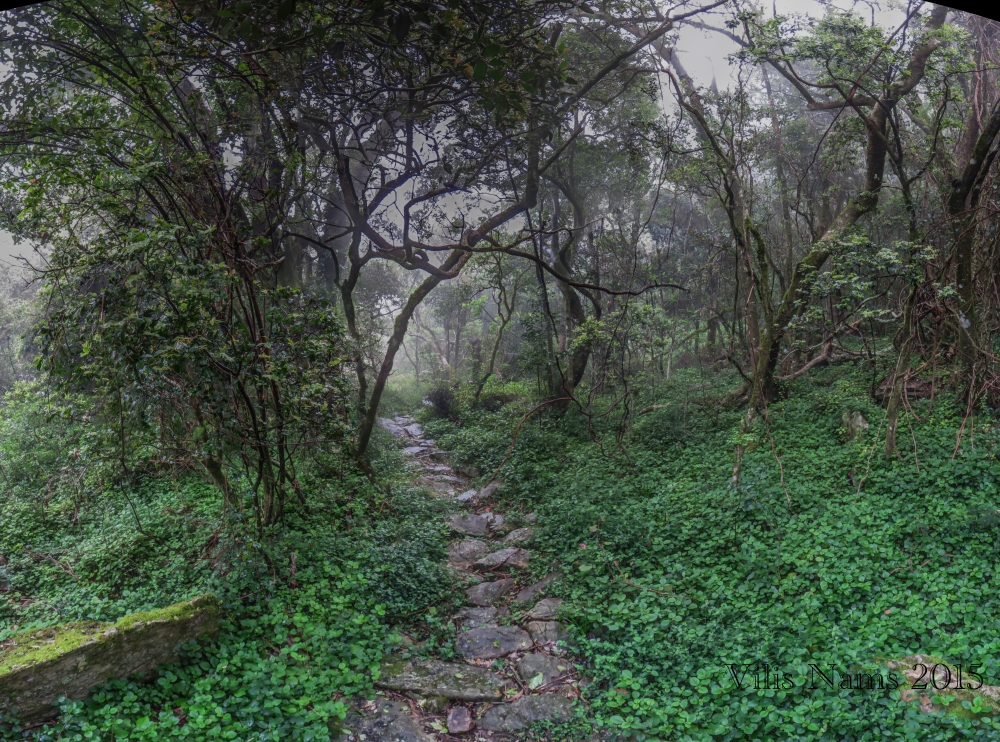 We walked slowly through the forest, ducking low to avoid entangled branches that arched over the trail. Bird songs resonated within the mist. Two Cape white-eyes flitted about in a shrub.

Too soon, the trail led us out of the “African jungle” and uphill to the trailhead, where the weather was completely socked in. Visibility was down to thirty metres. As we drove west on Mountain Drive, an oncoming white truck appeared out of nowhere, and Vilis swerved to avoid it. Continuing west, we crept along a rough dirt track that led down from Signal Hill. The track faded away in the mist, as though going on endlessly and leading to oblivion or eternity.