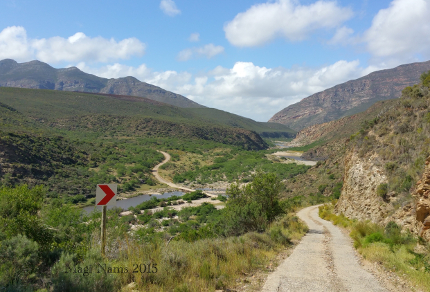 The rugged peaks and valleys of Cloetes Pass provide a picturesque backdrop for a backcountry mountain pass drive from South Africa’s Klein Karoo to the coastal plain.

On October 26, Vilis and I left Rooiberg Lodge early and drove west and then south through expanses of  semi-desert Klein Karoo rangeland, some of it grazed by cattle. Near Van Wyksdorp, mounds of flowering dwarf shrubs painted the arid landscape with splashes of gold, orange and pale pink. We had entered Western Cape’s Klein Karoo via Swartberg Pass to the north and would exit it via Cloetes Pass to the south. (Tap on photos to enlarge.)

The gravel R327 carried us south from Van Wyksdorp toward the coastal range of mountains, the Langeberg-Outeniqua range. In the rain shadow of the mountains, vividly green thorn trees growing along drainage lines presented a sharp contrast to tawny, boulder-strewn hills. We passed olive estates tucked here and there amid the arid grazing land.

The road turned east at Langberg, leading us parallel to the mountain range. To the south, steep, fynbos-covered peaks towered over us. To the north, a few grainfields (some irrigated) were interspersed with native vegetation. The red gravel road climbed to the base of the mountains and traced the feet of bulging hills, their warped rock layers exposed. Suddenly, it led us out into an open valley dominated by agriculture, with sheep paddocks and hayfields and grainfields that lay like pale gold quilts pieced together on rolling hills. Just as suddenly, the road veered away from the farmland and into Cloetes Pass. 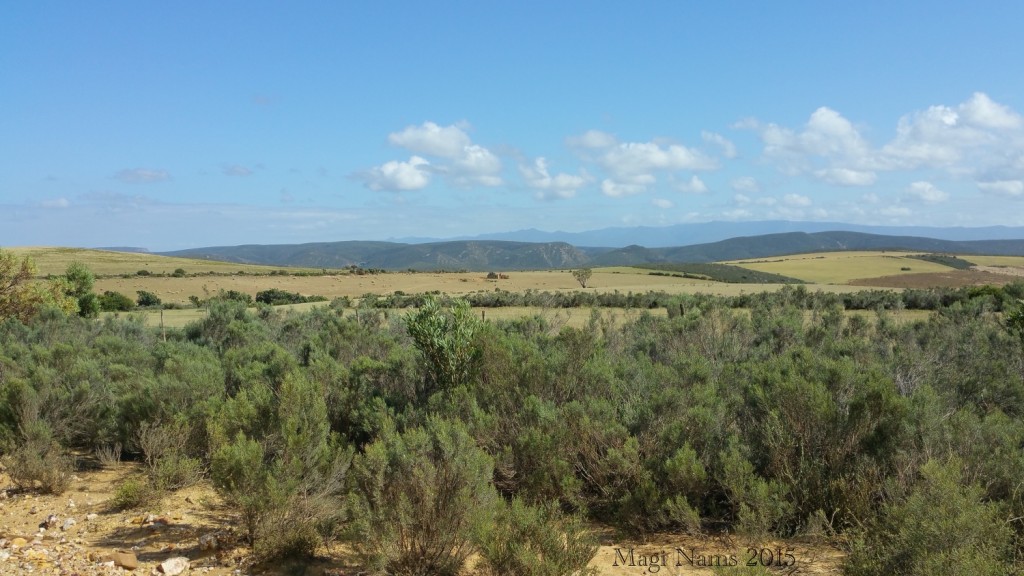 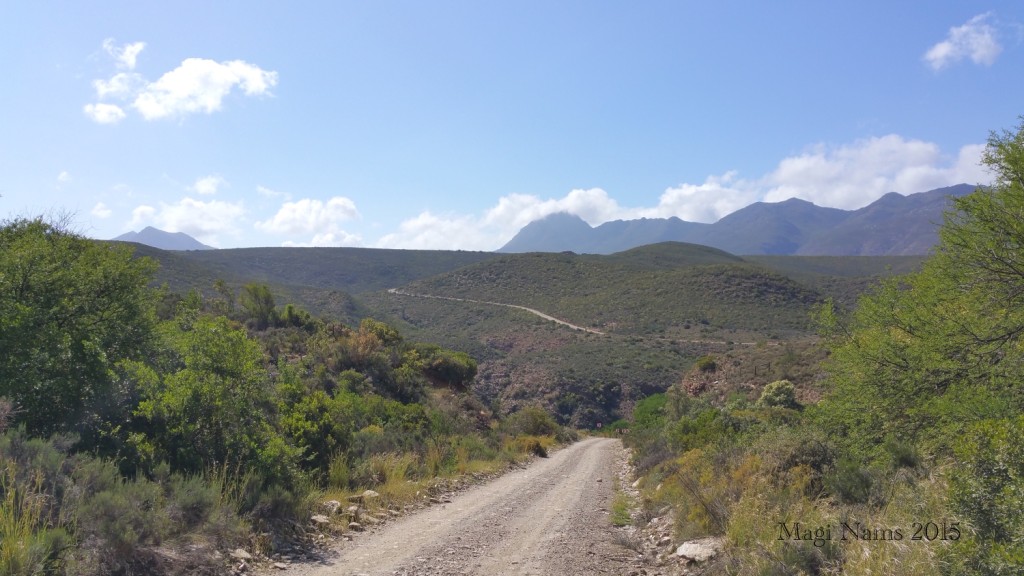 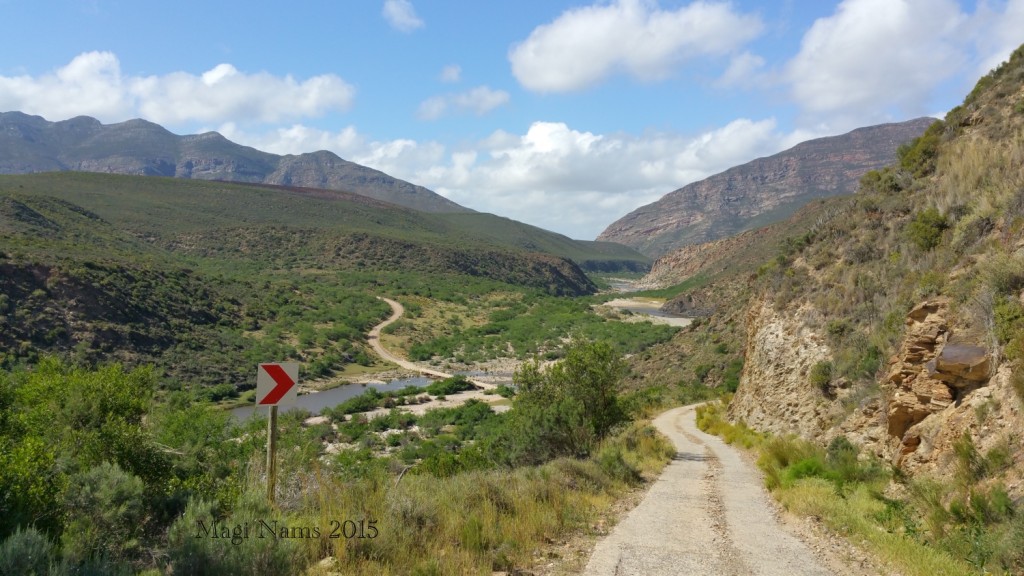 The gravel narrowed and snaked around rock walls. It hugged the sides of rolling hills like those of the Rooiberg range and repeatedly crossed a river at low-level concrete fords that would likely be impassable after heavy rains. Again, we popped out into a pocket of rolling farmland, this time, golden hay fields and rangeland grazed by ostriches and cattle. 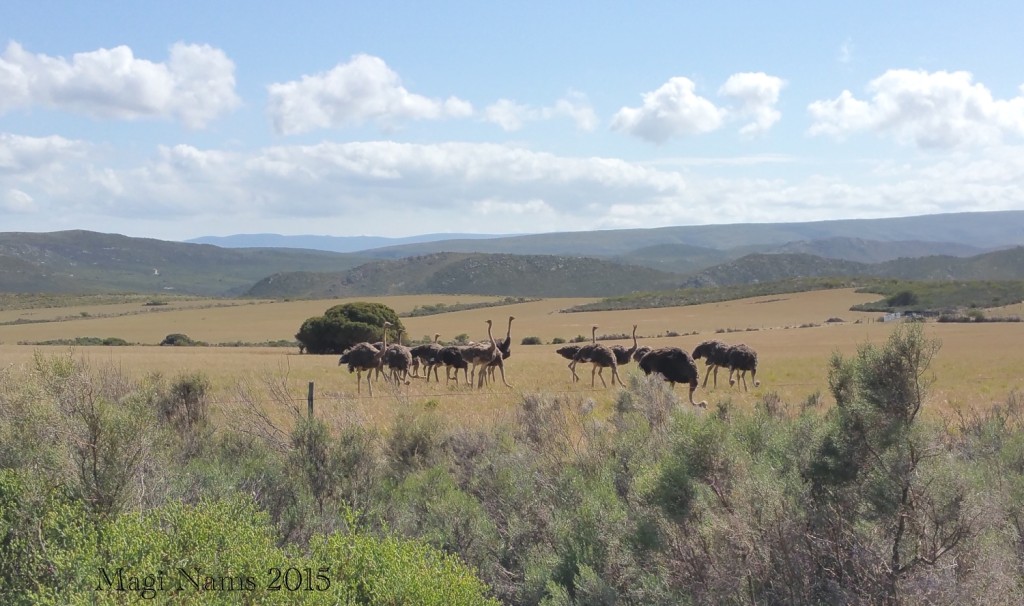 Then we were in the fynbos-covered hills once more. An upward stretch of road brought us to the 19-kilometre pass’s summit, with its rich views of bold, green-clad peaks sweeping away into the distance.

As we drove the lonely, backcountry road down from the summit, we passed one abandoned farm after another, a macadamia plantation and a pub in the middle of nowhere! Sheep paddocks appeared as we left the heights of the pass behind. In the tiny town of Herbertsdale, laundry had been hung on fences to dry, and fringed-leaved banana plants grew in backyards. (To see film footage from Cloetes Pass, visit Cyber Drive Mountain Passes South Africa.)

East of Herbertsdale, we drove a paved road through gentle Du Plessis Pass and out onto a lush coastal plain so different from the Karoo’s arid lands. This plain was nourished by rains blown in from the Indian Ocean. My next post will feature rich, indigenous coastal Afromontane forest – and zip lining!