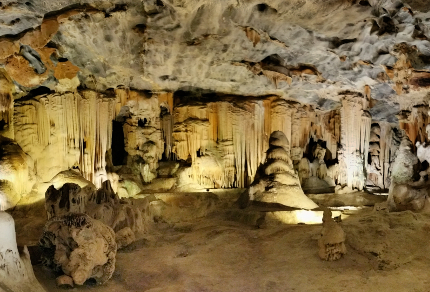 Cango Caves thrilled us with spectacular caverns and the adrenaline rush of crawling, climbing and squeezing through narrow rock passages. A fantastic South African adventure!

During our ten-day Karoo road trip, Vilis and I embarked on two brief adventures that were totally unrelated to his big cat movement research. In other words, they were just for fun. The first of these had us hunching, crawling, climbing and squeezing through narrow rock passages in Cango Caves. The second was a forest canopy zip line tour in Tsitsikamma National Park, which I’ll tell you about in a future post.

As we descended from Swartberg Pass, we passed Cango Caves about 30 kilometres north of Oudtshoorn, an agriculture and tourism hub within the Klein Karoo, a long, narrow stretch of hilly, semi-arid land sandwiched between the Swartberg range to the north and the Outeniqua-Langeberg mountains to the south. Keen to see Africa’s largest show caves, we returned to Cango Caves the next day and bought tickets for the adventure tour, a 90-minute exploration of one kilometre of underground caverns and passages within a Precambrian limestone ridge that parallels the Swartberg range. (Tap on photos to enlarge.) 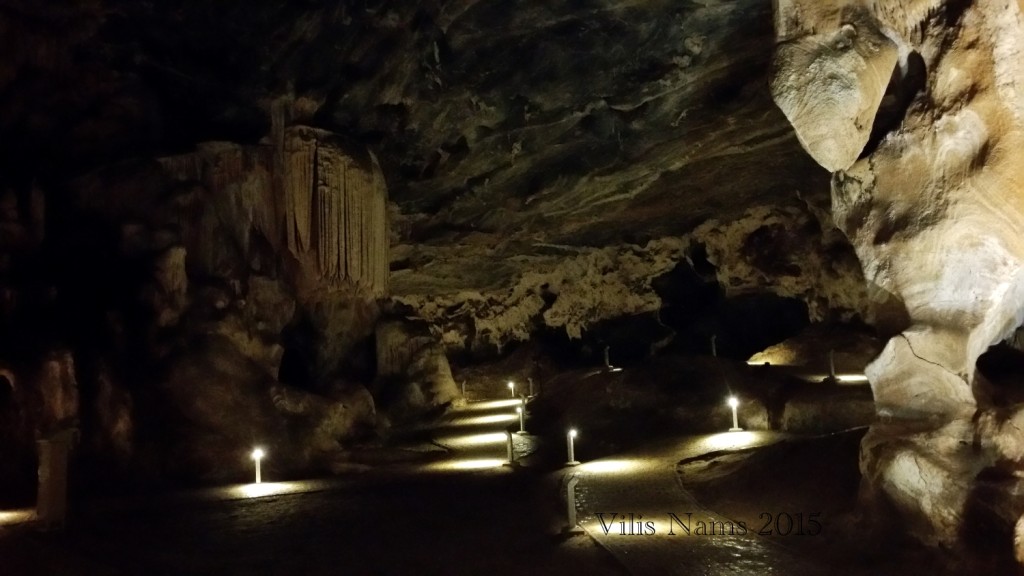 I had no qualms at all about the first section of the tour, which highlights spacious, well-lit caverns near the cave entrance, but confess to some butterflies and weak knees at the thought of inching through narrow spaces with tons of rock surrounding me during the more challenging section of the tour beyond the big caverns. However, I wasn’t about to let my fears steal my enjoyment, so I went for it!

Vilis, I, and sixteen other excited cave-goers descended stairs into the first cavern, where the air was mild and humid. Ancient paintings of an elephant (restored) and two warriors (original) were visible on a rock wall. Our knowledgeable guide explained that Cango is a Khoisan word spoken with a pronounced click on the C. Cango Caves had been occupied by Khoisan for 75,000 years until clashes with European settlers 250 years ago caused the Khoisan to abandon the climate-constant, sheltering cavern near the entrance, now called Van Zyl’s Hall.

We gained an appreciation for the depth of darkness within the caves when our guide switched off all the lights except for one red electric candle. That candle cast only a feeble glow into the great vault of Van Zyl’s Hall, which is 50 metres wide, 18 metres high and more than 90 metres long. In the past, the hall’s excellent acoustics made it a popular setting for concerts. Unfortunately, performances are no longer allowed due to wayward concert-goers and vandalism.

As we walked through the caverns near the entrance, which are also featured in the Cango Caves popular 60-minute heritage tour, candlelike electric lights spaced at intervals lit stairways and gently contoured paths. The second cavern, Botha’s Hall, although not the largest, was by far the most beautiful. Dripstone stalactites needled down from a pocked rock ceiling that rolled like a limestone sea. Stalagmites mounded up from the floor. Fluted pillars formed by the joining of stalactites above and stalagmites below stood like columns supporting the cave roof. Clusters of pillars had coalesced, creating rock curtains given names like Organ Pipes and Crystal Waterfall. This cavern, with its ancient formations, was one of the most exquisite and awe-inspiring sights I have ever seen. 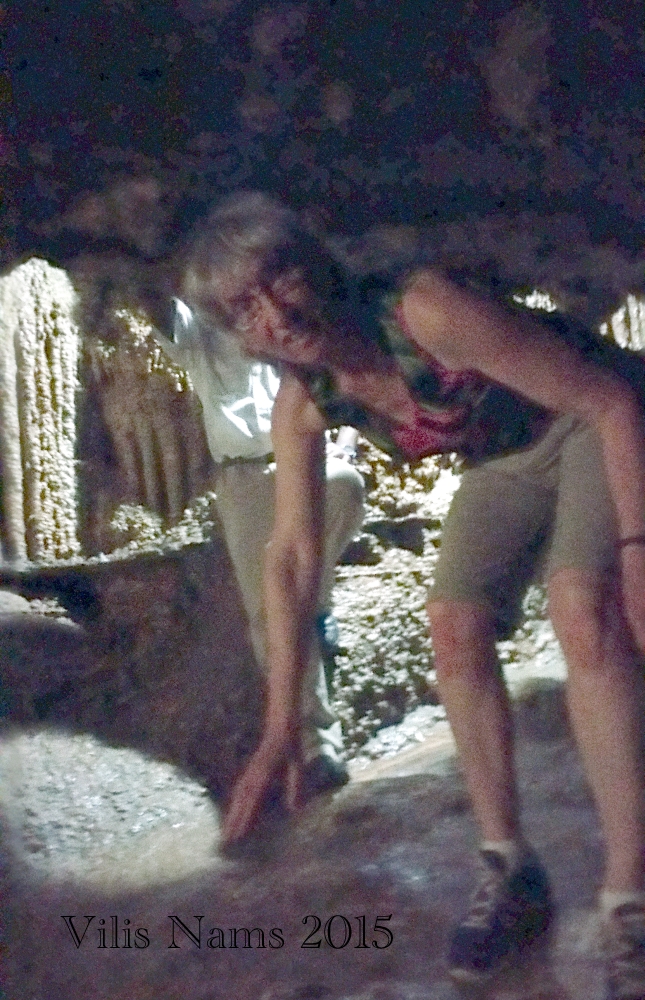 After reaching the Drum Room, the farthest point on the Cango Caves heritage tour, we left the gentle pathways behind. As we headed into the adventure portion of the tour, we descended Jacob’s Ladder (more than 200 steps) through the Grand Hall and into a narrow passage called The Avenue, which gave us an easy, introductory taste of what was to come. Next up was back-straining, 85-metre, low-roofed Lumbago Alley, and then a set of steps leading down into King Solomon’s Mines, a complex of cave chambers that had the feel of a dungeon. Past that cavern, the fun really began.

We ascended a set of metal steps and, one by one, disappeared into the Tunnel of Love, given that name because it’s so narrow in places, it might give you a squeeze. 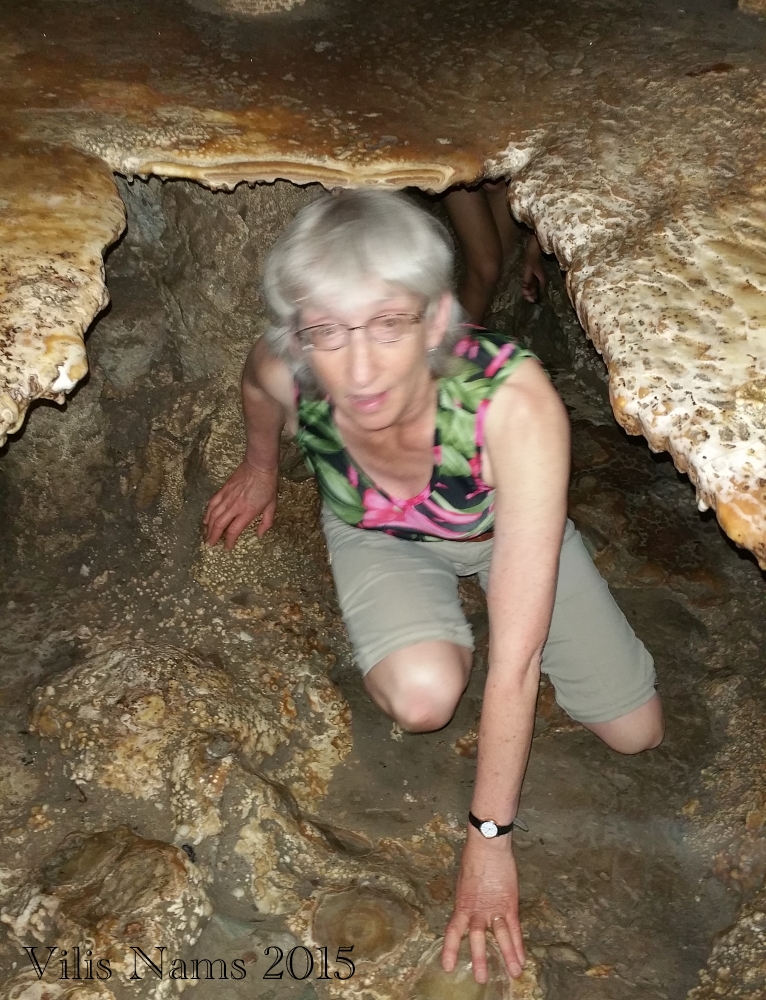 Scrambling through the Coffin (© Vilis Nams)

Thankfully, each of the adventure tour’s challenging passages was never completely dark, and we could always see beckoning (and comforting!) light at the end. The chambers between the tricky passages gave us an opportunity to stand up, catch our breaths, and have a look around. Intriguingly, the rocks in the passages have been smoothed by so many people sliding over and past them, that they have very few rough edges (but you still have to watch your head!) and carry very little dirt. You end up surprisingly clean at the tour’s end. 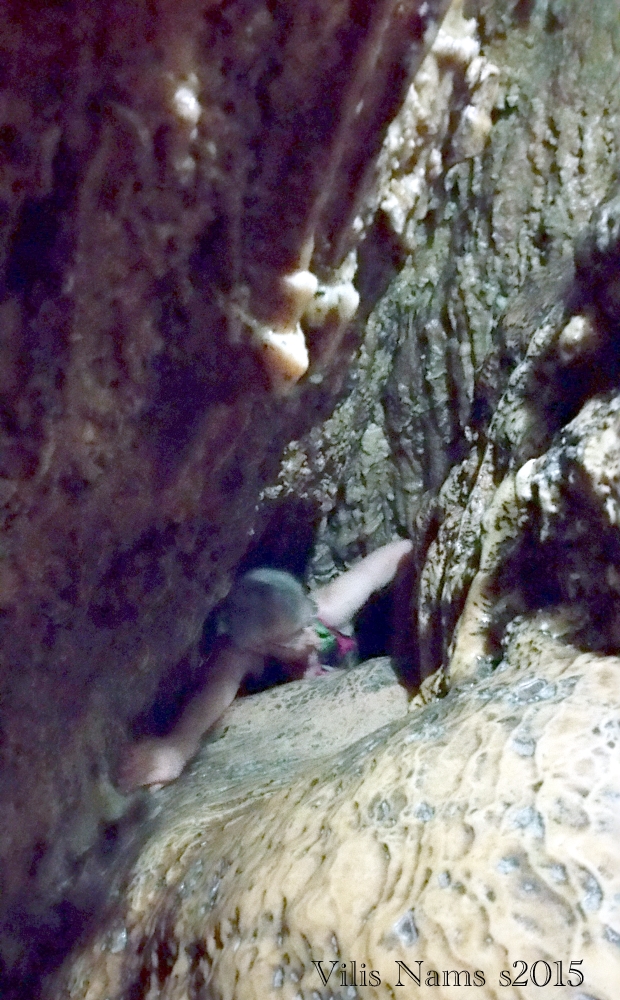 Past the Tunnel of Love, we emerged into Ice Chamber and then hunched or crawled through the Coffin, a hole in the chamber floor, into the final “Devil’s” circuit of chambers and passages.

Beyond a large chamber called the Devil’s Workshop, we were faced with the Devil’s Chimney, a 3.5 metre-high shaft less than 0.5-metre wide, with no artificial handholds or footholds. That was tough. I climbed and wiggled and dragged myself up the shaft and emerged, sweating and panting, into the next chamber. Vilis, who was ahead of me on the tour, had his cell phone with him and snapped pics of me. 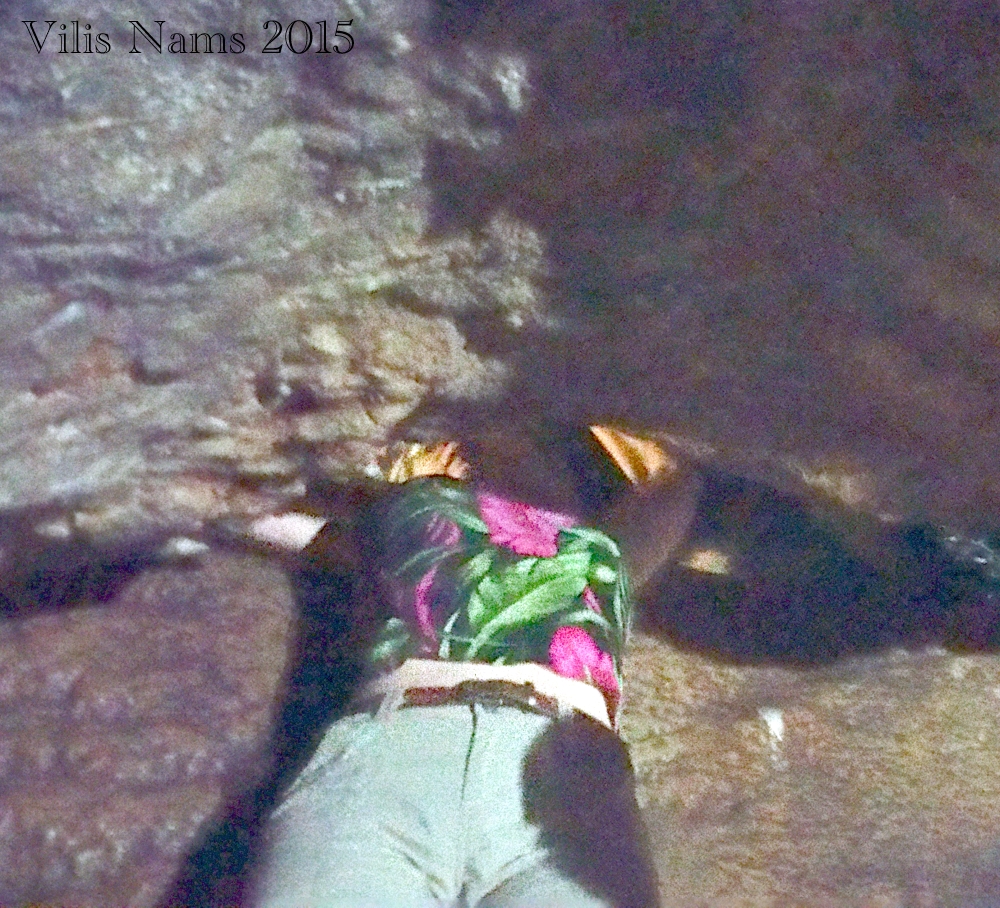 One last challenge awaited us. The final chamber shrank into a flattened space with a narrow slit in the rock wall – the only exit. At its narrowest point, the slit, called the Devil’s Postbox, was only 27 centimetres wide. Both Vilis and I went through it feet first rather than head first. It was the eeriest sensation to slide through the slot, with my back arched and head back to make my body as thin as possible, and just let go, not knowing how far below my feet the chamber floor rested. 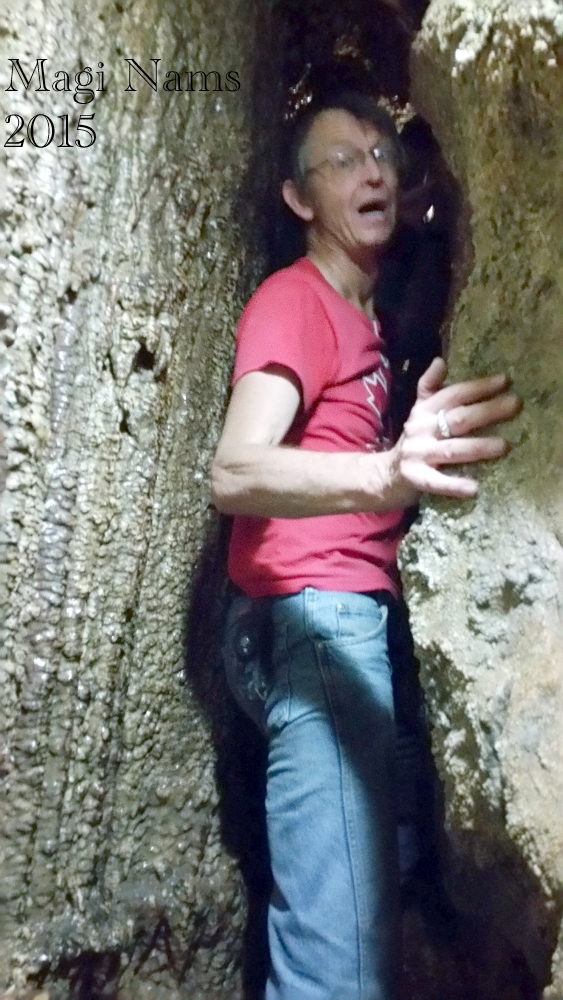 In the Tunnel of Love, Cango Caves (© Magi Nams)

Not far, as it turned out. I smiled with relief and excitement as I joined the rest of the cavers, some laughing, some breathing hard, all of us filled with adrenaline. With the most difficult part of the adventure tour completed, we retraced our steps through the Coffin and Tunnel of Love, and into the wider passageways and immense caverns near the entrance.

Vilis and I emerged from the dimly lit caverns into the scorching sunshine and agreed that the adventure tour had been great, both thrilling and tremendous fun. Well done, Cango Caves! 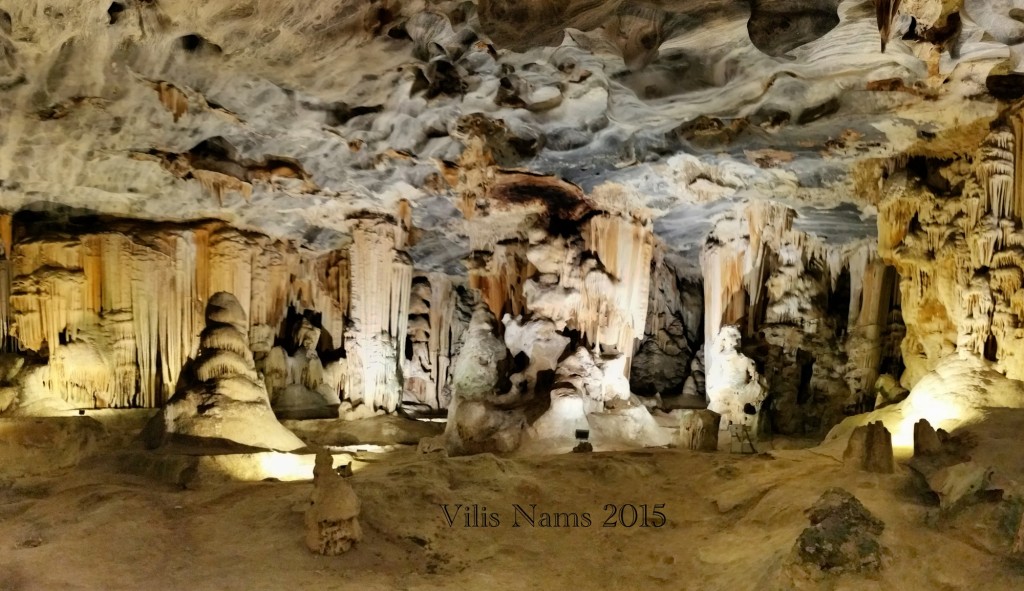