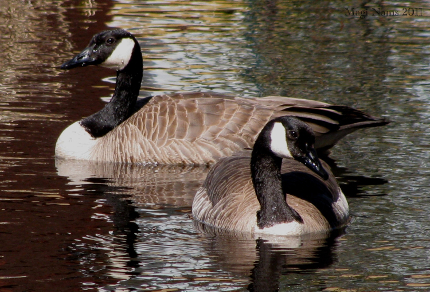 During the past week, I’ve heard Canada geese calling from a beaver-engineered wetland near my home. Listening to the deep, musical  honking, I decided that Branta canadensis, the Canada goose, should be my next featured bird. This species is native to North America, has been introduced to Europe and New Zealand and occurs as a vagrant in Australia, Iceland, the Caribbean, Korea, Japan and some European countries.1 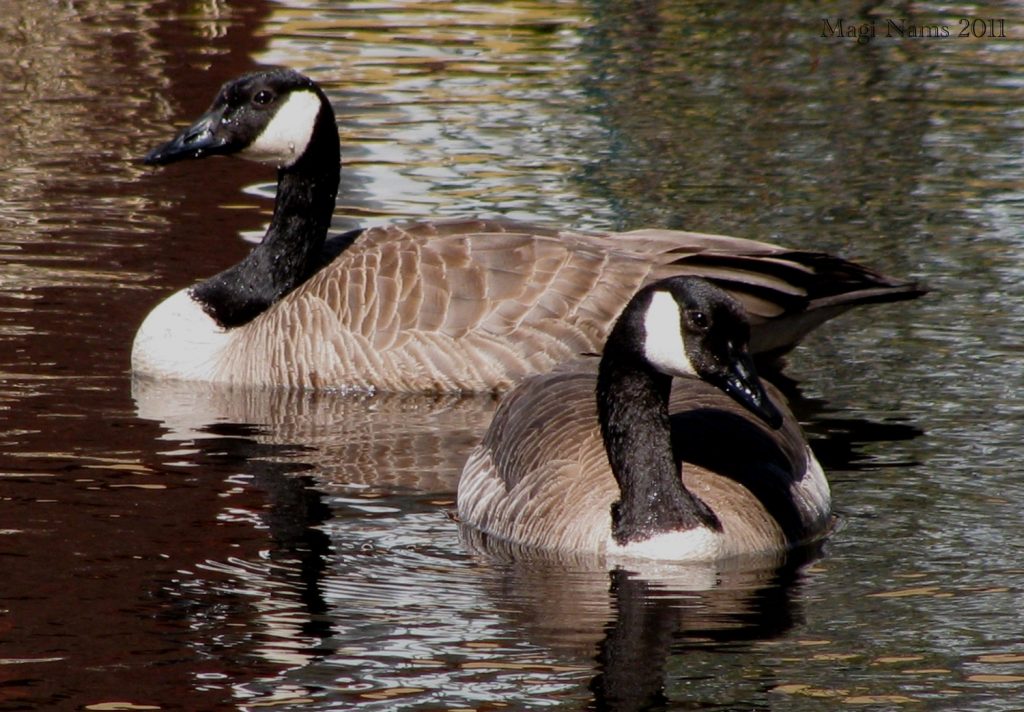 The Canada goose is a large, handsome waterfowl with a pale brown body, white belly, black neck and distinctive white chin strap. It weighs 3–9 kilograms, is 0.7–1.1 metres long and has a wingspan of 1.2–1.7 metres.2 One exceptionally large Canada goose weighed in at nearly 11 kilograms,3 which would have made a bountiful Thanksgiving dinner. 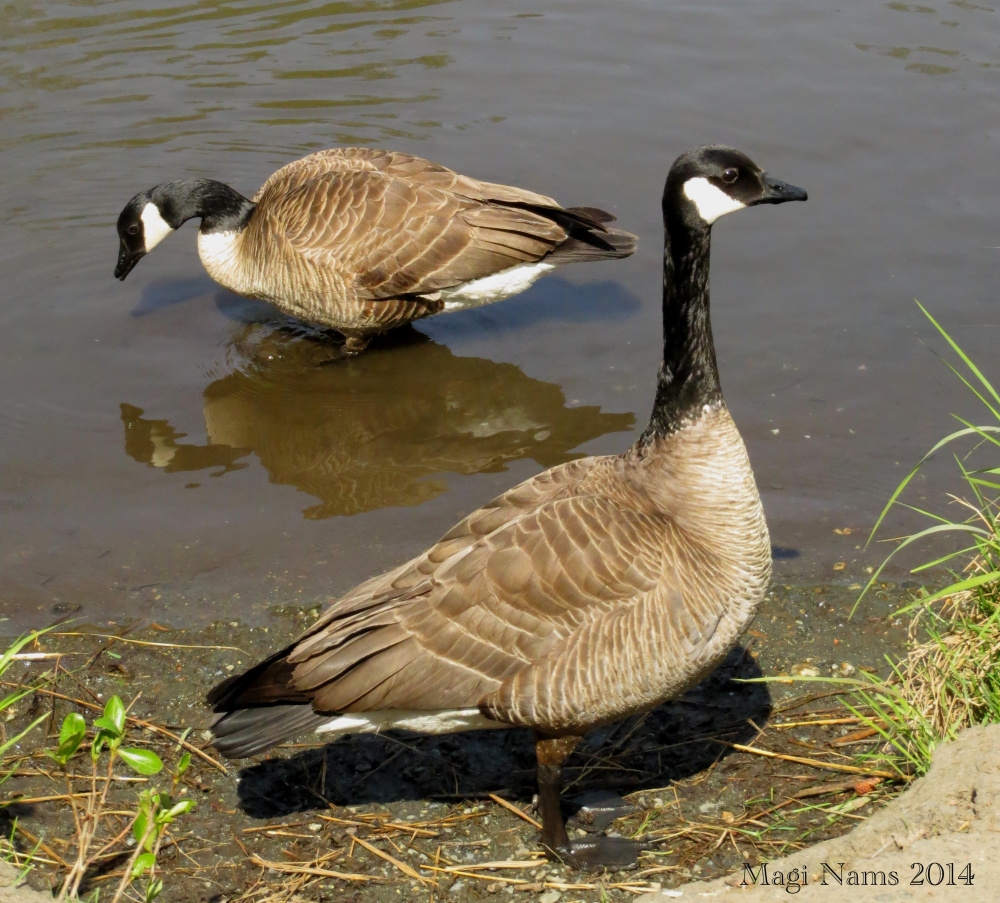 Canada geese occur in many kinds of habitats near water, including grasslands, tundra, woodlands, agricultural fields and urban lawns.1 In spring and summer, they graze on leaves of grasses, sedges and other plants. In water, they “dabble” by upending their bodies and extending their necks underwater in order to feed on submergent plants. In autumn and winter, they tend to feed on berries and seeds.2 I grew up on a farm in Alberta and recall many years when Canada geese staging while migrating south from their breeding grounds gorged themselves in my father’s grain fields adjacent to Thomas Lake. This species is regarded a nuisance by some farmers and by residents of urban centres where the geese damage lawns and leave copious droppings.1

During spring and autumn migrations, Canada geese fly in a characteristic “V” formation called a skein. This is an energy-efficient aerodynamic arrangement that allows birds behind the leader to conserve energy. The geese honk to communicate with each other while in flight. Males vocalize the deep honks, and females produce higher-pitched sounds.3 For me, as a child, it was skeins of honking geese high in the prairie sky that heralded the true onset of spring and autumn. For an intriguing look at the aerodynamics of the V-formation used by birds such as geese and ibises, check out this study: Migrating Birds Use Precise Flight Formations to Maximize Energy Efficiency.

Canada geese are relatively long-lived. Their average lifespan in the wild is twelve years;3 however, one banded Canada goose was shot thirty-three years after it was banded.2 These geese form life-long pair bonds and choose mates that are similar in size to themselves, although within a pair, the male or gander is usually larger than the female or goose.2 Canada geese usually start to breed in their fourth year.2 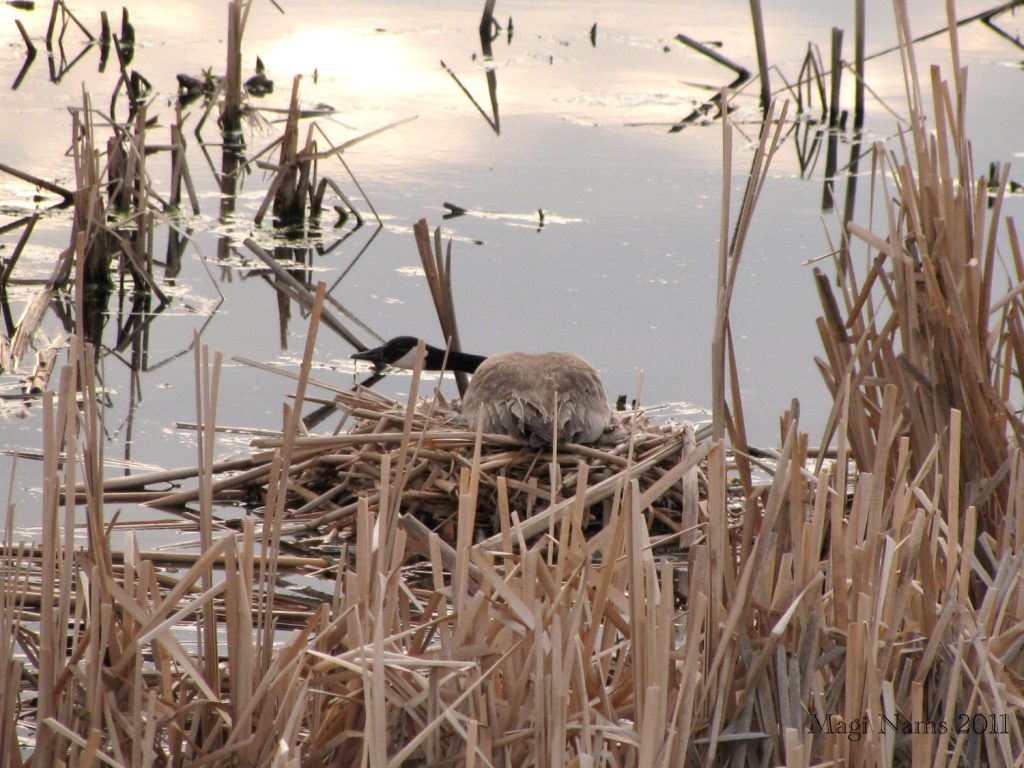 The female Canada goose constructs a nest on a mound of vegetation (often a muskrat house) near or in water. She lines the nest with feathers and lays two to eight eggs, which she incubates while the male guards her and the nest. Incubation lasts 25–28 days, and goslings are considered to be nestlings for 42–50 days. They may remain with their parents for up to a year.2 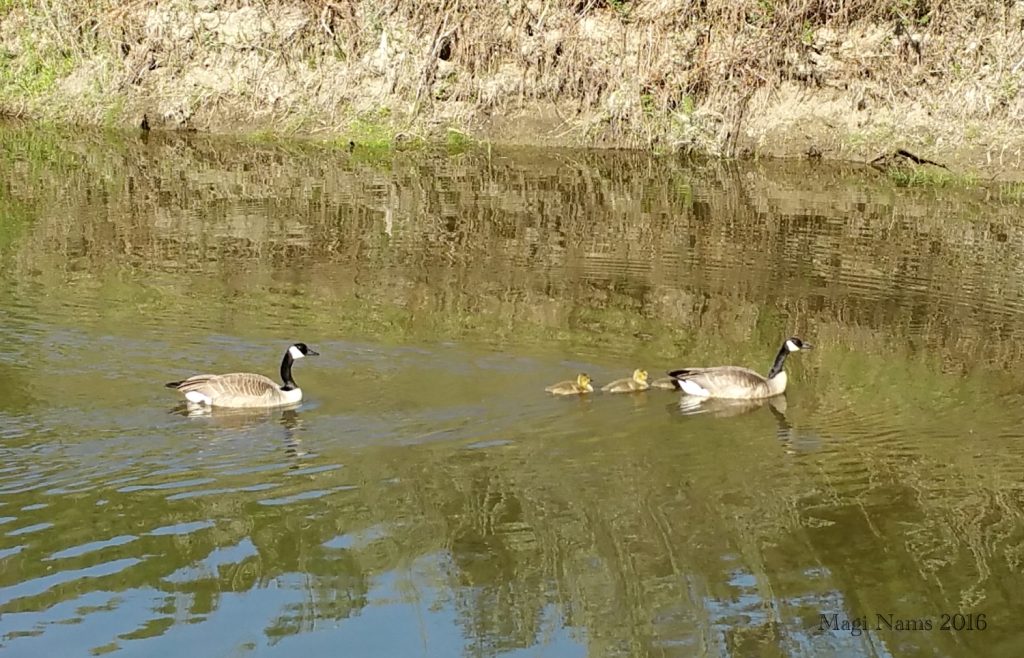 It’s an intriguing fact that Canada geese are smaller in the northern part of their geographic range and darker in the western part of their range. Perhaps this shouldn’t be surprising, given that this species consists of eleven or more subspecies. The biggest of these subspecies, Branta canadensis maxima, almost became extinct in the early 1900s due to hunting but has since recovered.2 Here in Nova Scotia, I see fewer Canada geese than I did when growing up in Alberta, and the skeins are smaller. However, I rejoice each time I hear that familiar honking – the voice of home. 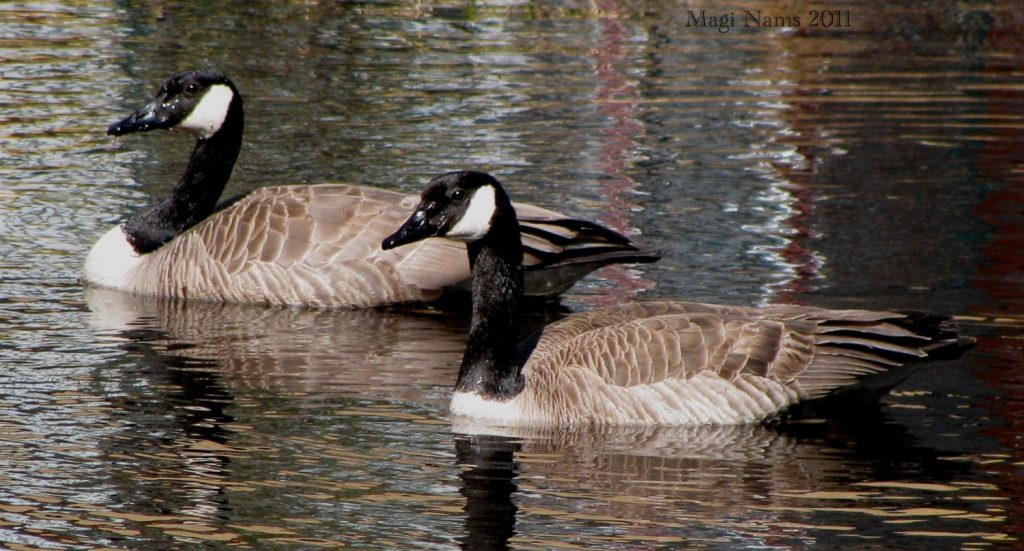 2. Cornell University. 2015. Canada Goose. The Cornell Lab of Ornithology. Accessed May 01, 2017 at https://www.allaboutbirds.org/guide/Canada_Goose/lifehistory.