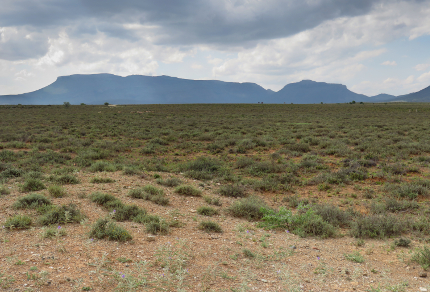 Located in South Africa’s arid Karoo region, scenic Camdeboo National Park protects mountains and plains surrounding the historic town of Graaff-Reinet, as well as Nqweba Dam and the spectacular dolerite pillars of the Valley of Desolation.

Vilis and I didn’t depart from Mountain Zebra National Park as early as planned on October 21 because a report came in of a cheetah hunting black wildebeest on the Rooiplat plain, just as we returned from our early morning walk. We wolfed down a bowl of porridge and drove directly to the dam where the cheetah had been sighted. After scanning the dry, rocky slopes around the small waterhole, I spotted the cat resting beside its kill. The cheetah and wildebeest carcass were half-hidden in bleached, tawny grasses. We waited, and after five minutes or so, the cheetah sat up and surveyed its surroundings before beginning to feed. Pied crows circled overhead, and two black-backed jackals trotted up and rested near the kill site, waiting to scavenge the remnants. A small herd of black wildebeest and a line of blesbok on high alert stood near the dam but didn’t drink.

We returned to the rest camp and packed up. Our destination for the day was Camdeboo National Park, about 130 kilometres to the west. Under a brilliant blue sky, we drove across a vast plain bordered by mountains. Vegetation was sparse, with shrubs forming low mounds on orange-colured soil. The plain was fenced into huge expanses of rangeland grazed by game, a few cattle, sheep and ostriches. The landscape appeared even more arid than the landscape within Mountain Zebra National Park. This impression was reinforced as we drove past dry riverbeds and deeper into the Karoo, a Khoi-khoi word meaning “Great Thirstland.”1 (Tap on photos to enlarge.)

Heading into the Great Karoo (© Magi Nams) Photo taken between Craddock and Graaf-Reinet.

After 90 minutes of driving, we reached the park. At 20,000 hectares in area, Camdeboo National Park is much smaller than Mountain Zebra and Karoo National Parks, yet what it lacks in size, it makes up for in scenery. The park protects mountains and plains that surround the historic town of Graaff-Reinet, as well as Nqweba Dam, a large lake originally created in the 1920s as an irrigation project. 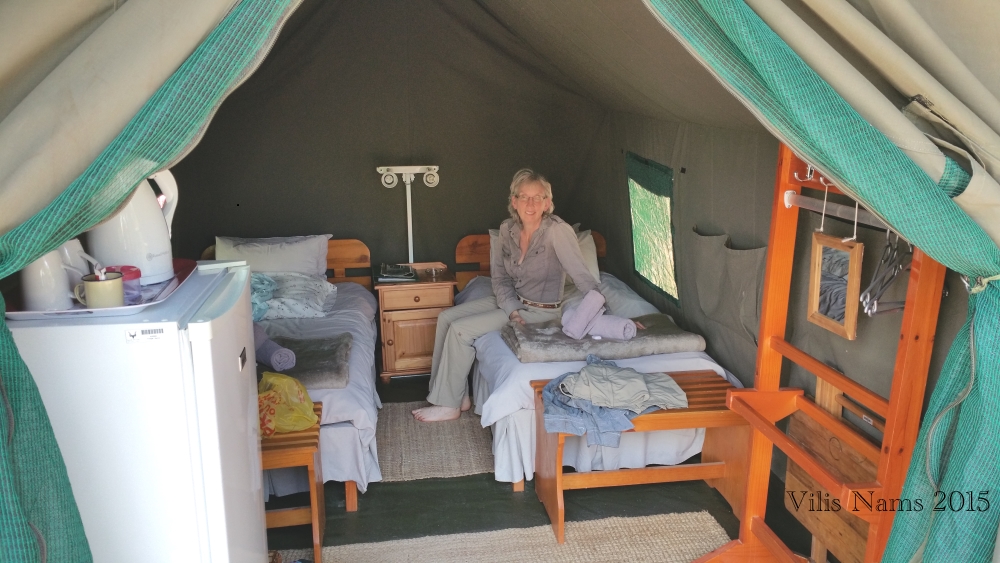 We bought groceries in Graaff-Reinet and then checked in at the park to obtain the keys for our tented camp on the shore of Nqweba Dam. Ever since our arrival in South Africa, I’d been wanting to sleep in a tent. This one was roomy and comfortable, with the outdoors whispering all around us. 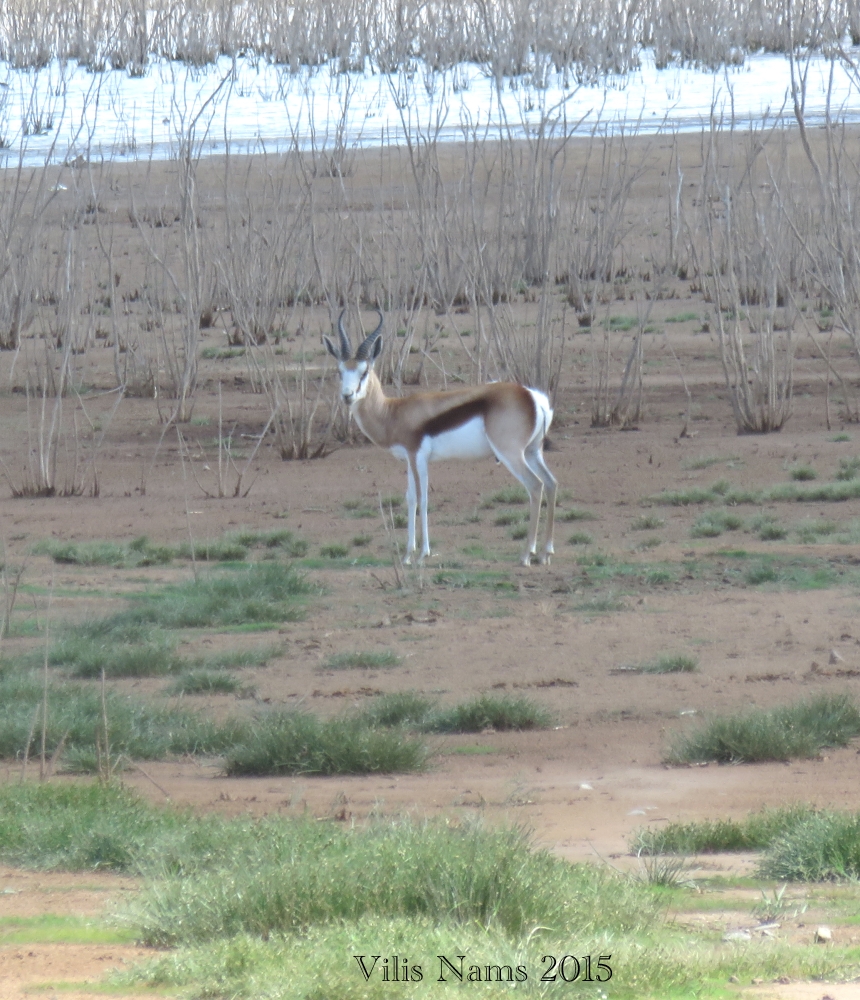 After we unloaded our gear, we drove to a lookout on the dam shore, where I spotted my first African spoonbills, pied avocets and glossy ibises foraging at the water’s edge. A strong wind whipped the dam surface into whitecaps, and the lakeshore’s sandy mud was imprinted with cloven-hoof tracks. A small herd of blesbok walked past at the water line. A springbok stared at us before bounding away. 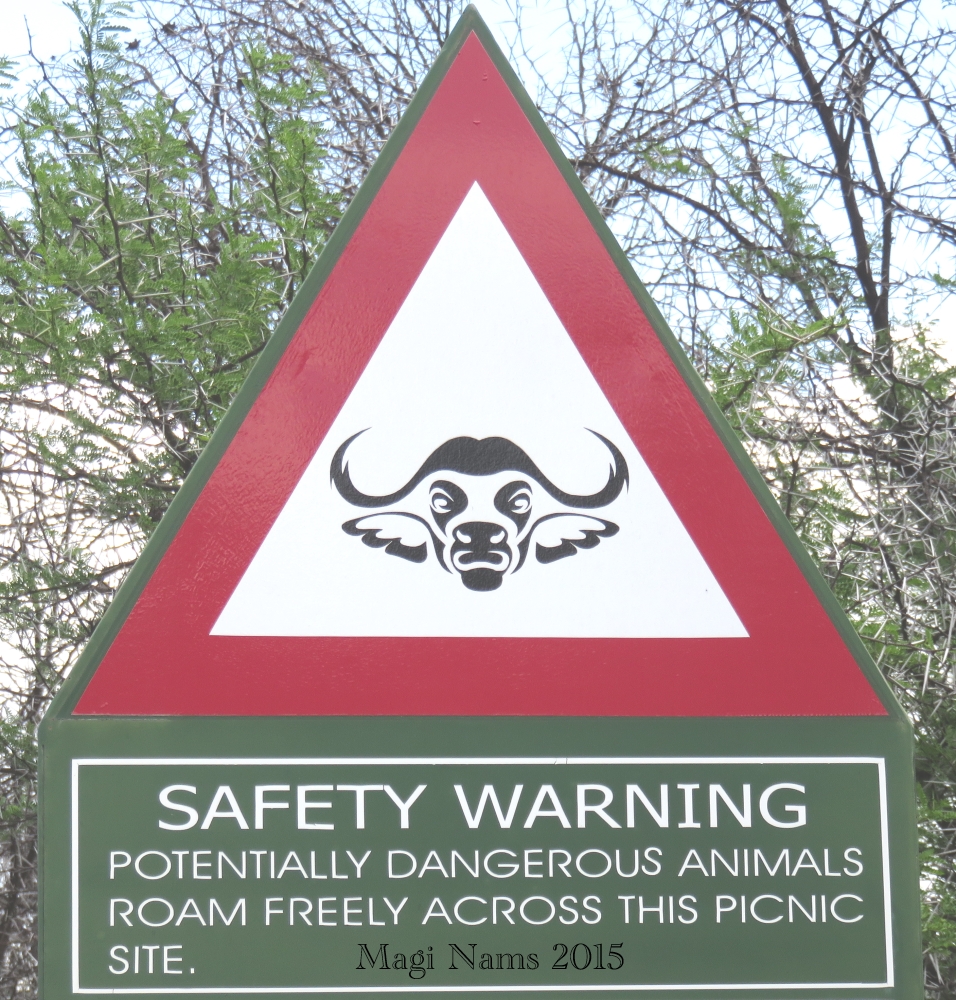 In the heat of mid-afternoon, we drove through Camdeboo’s game viewing area in the northwest section of the park. This part of the park incorporated a number of habitats, including succulent thicket, shrubland, dwarf shrubland and wetland near the dam. Buffalo warnings were posted in the picnic site. Although we spotted resting kudu and blesbok in the vicinity, we saw no buffalo. Ostriches stood skylined against a backdrop of rugged mountain slopes. A black-shouldered kite perched atop a tree. 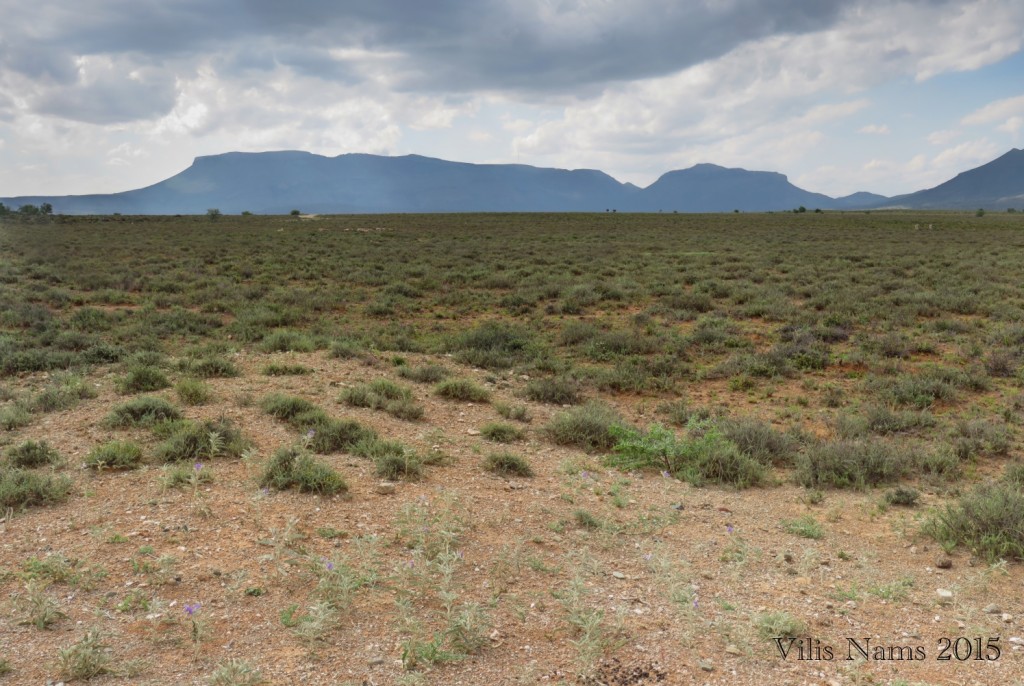 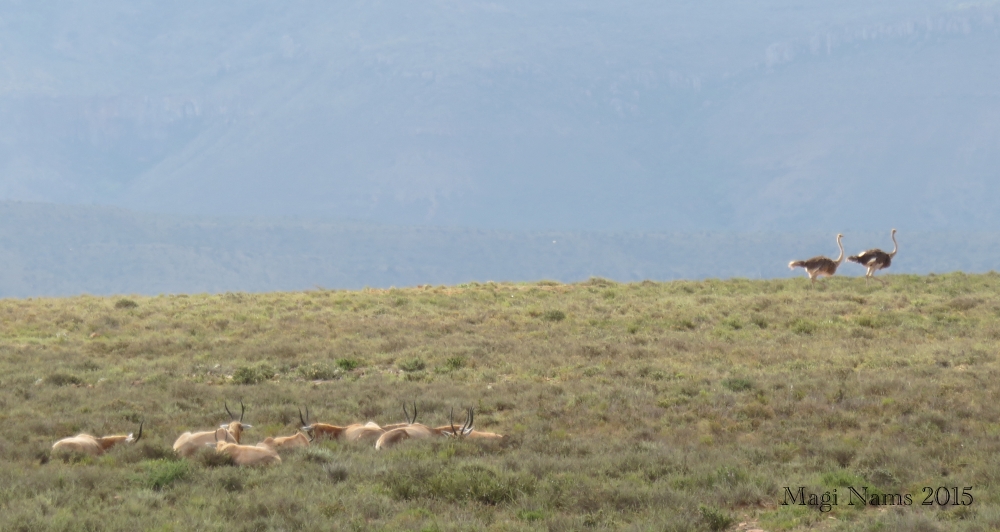 Heavy cloud cover promised early darkness, so we abandoned the low veld game viewing area and drove Valley Road up into the foothills of the Sneeuberg Range to view the Valley of Desolation, Camdeboo’s premier tourist attraction. En route to the famous valley, we hiked up to a toposcope look out and gazed down at Graaff-Reinet and its surrounding peaks. Wind tore at our hair and shoved our bodies, a warning of how dangerous it would be to stand near the cliff’s edge. I spotted a well-camouflaged lizard on a pinkish boulder in a sheltered nook on the trail. When I touched an adjacent boulder, the stone felt warm, a good indication that the lizard was likely absorbing heat from the rock on which it rested.

Continuing on, we drove a steep incline to the escarpment overlooking the Valley of Desolation and walked to the protected edge of this geological marvel. Sheer cliff faces of jointed dolerite pillars towered over a narrow, wooded gorge at their feet. The pillars were left behind after softer sedimentary rocks between them eroded away.1  Beyond the red pillars, the far-flung plains of the Great Karoo stretched into the distance to the west. 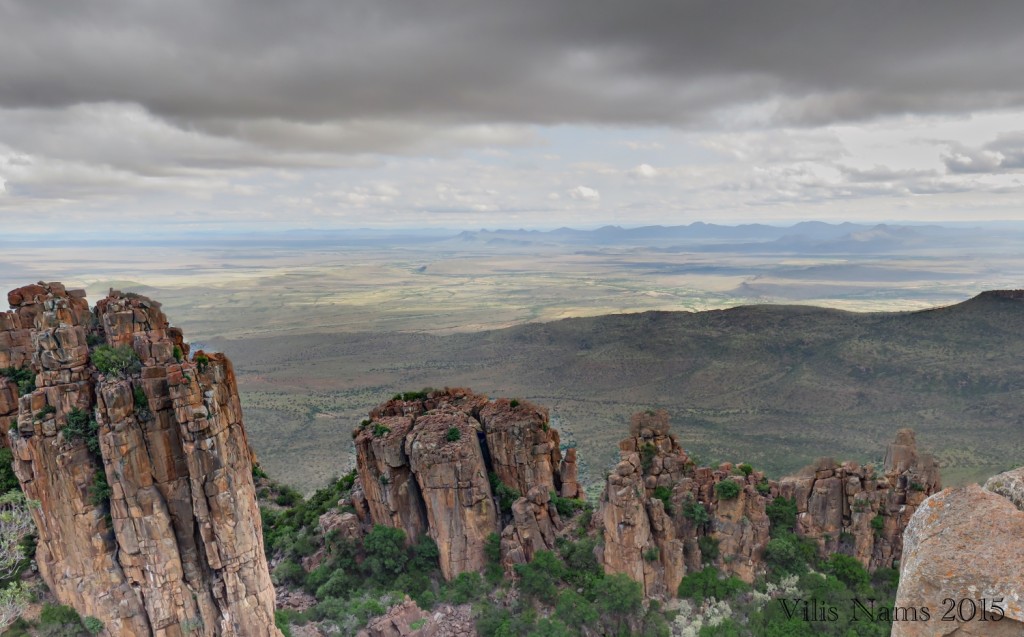 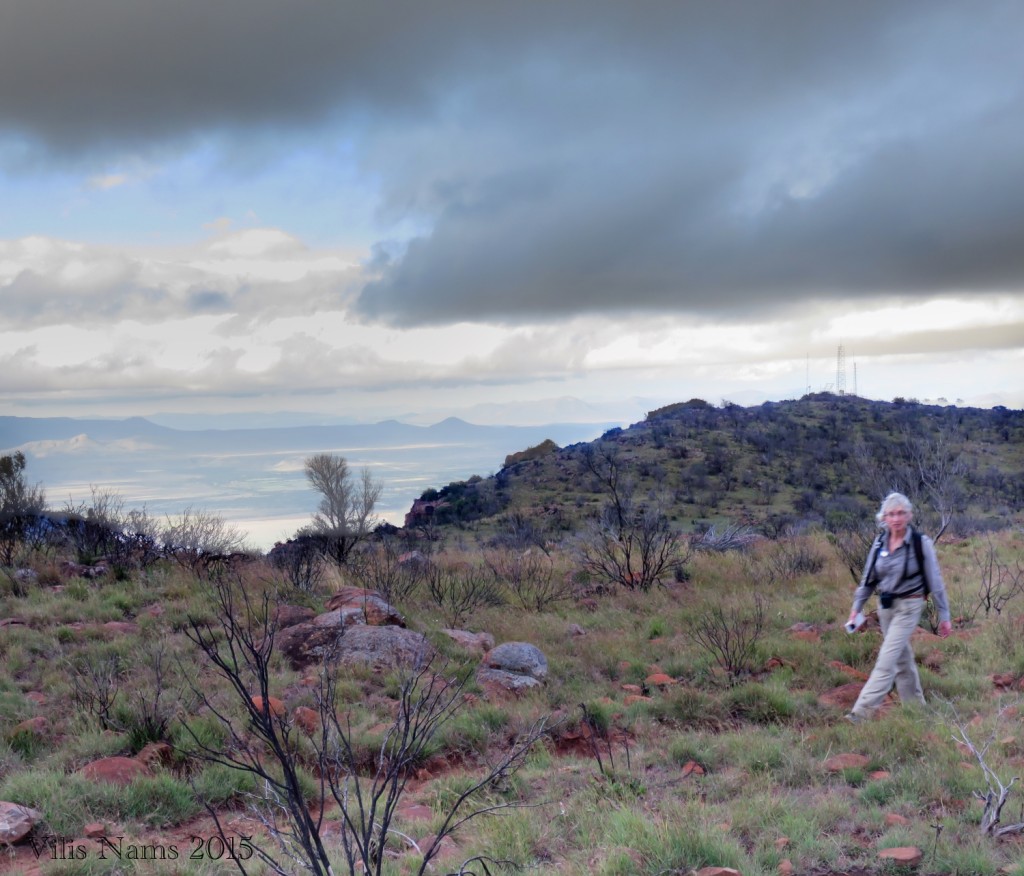 To get more of a feel for the valley and Camdeboo landscapes, we walked the Crag Lizard Trail atop the escarpment.  Vilis spotted a baboon troop silhouetted on the edge, seemingly unfazed by the sheer drop at their feet and the blasting wind. From the escarpment’s western edge, we looked out onto a lowland between thrusting peaks beneath a wild sky dark with thunderheads.

Rain spattered us as we hiked the return half of the loop trail and drove back to camp. Refreshed by an outdoor shower, we ate sausages and stir-fry veggies at a picnic table as dusk fell and three kudu walked past, single file, beyond the camp fence. We read in the tent, and I snuggled into bed early. I was delighted to feel the wind blowing through the screen, onto my face. In the morning, I slipped out of bed, well-rested, and enjoyed an hour of birding before we packed up. Next destination: Karoo National Park. 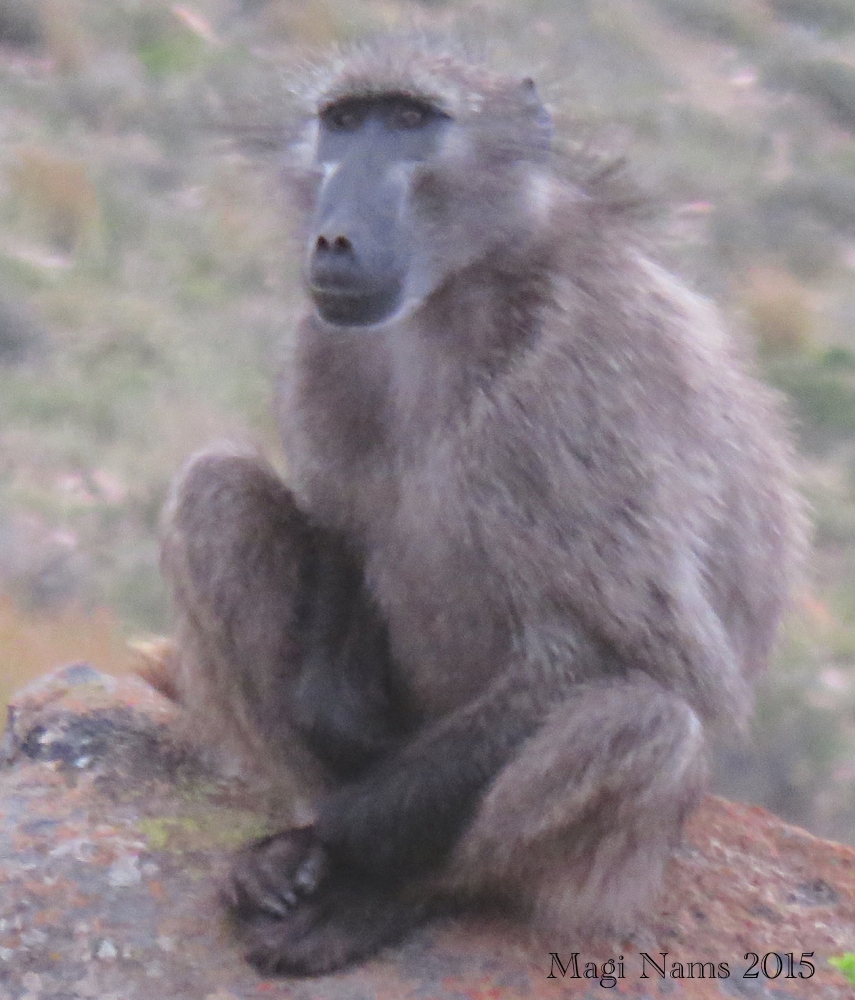