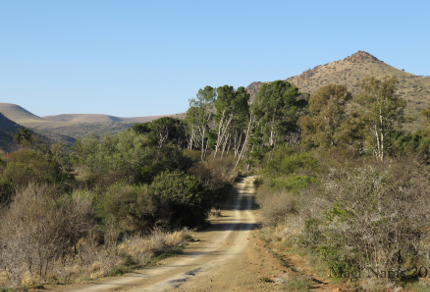 Vilis and I spent South Africa’s long August weekend in the good company of nine other Diaz Cross Bird Club members from Grahamstown and Kenton-on-Sea. Nine of us met at Albany Museum in Grahamstown on Saturday before sunrise and then headed north for three days of birding in Baviaans River Valley. Our destination was Huntly Glen farm in the western reaches of the Amathole Mountains. The other two birders joined us along the way. (Tap on photos to enlarge.)

North of Grahamstown, we drove through East Coast Subtropical Thicket characterized by the presence of thorn trees, aloes and succulents and then through vast expanses of grassveld peppered with red termite mounds. Springbok, goats, sheep and beef cattle grazed on the dry rangeland. Silvery-grey vervet monkeys in treetops soaked up early morning sunshine and romped across the highway – one even bounced into a handstand and walked on its hands!

A few kilometres beyond Bedford, a small town nestled at the feet of the Amathole mountains, we took the Tarkastad turnoff and entered the Baviaans River Conservancy, a 350,000-acre span of rugged country consisting of steep-sloped peaks and ridges, gouged-out watercourses and a valley floor covered with rocks, thorn trees and clumps of sweet-smelling ankerkaroo, a heath-like shrub. Fifty minutes of driving on rough dirt and rock road led us to Huntly Glen farm stay, our base for the weekend. 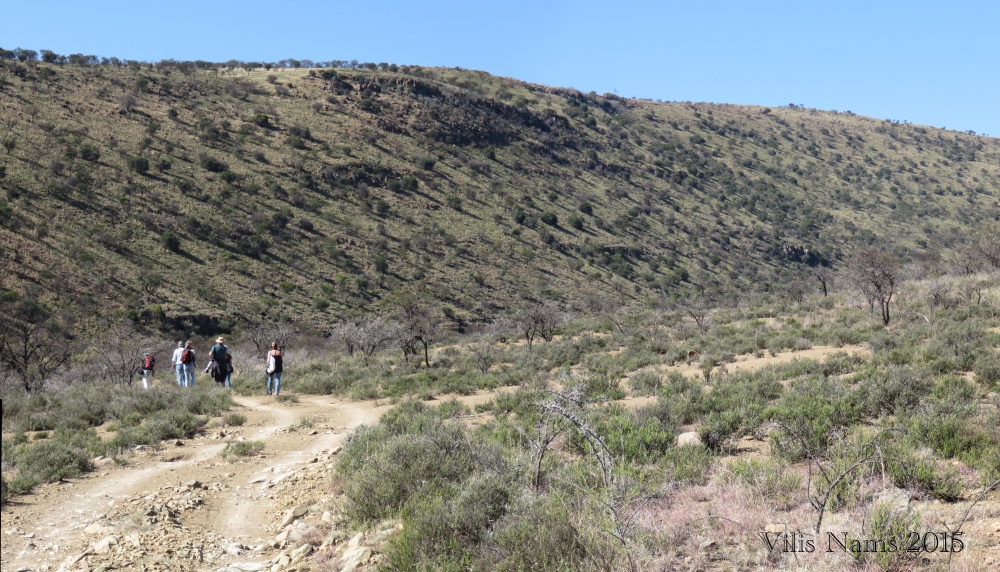 A late morning drive and walk on the 6000-hectare property netted us sightings of Verreaux’s (black) eagles soaring over the peaks, Hadeda ibises screeching out their taking-to-flight alarm calls, yellow-billed ducks on a dam and an assortment of smaller birds that included, among others, a familiar chat, golden-breasted buntings, Cape glossy starlings, red-winged starlings and greater double-collared sunbirds. Mountain reedbuck and a common (grey) duiker foraged on a hillside. A baboon sentry silhouetted on a ridgetop skyline shouted out warnings to its troop. We located the black eagles’ nest on a krans (precipice) near one end of a long, high ridge.

A relaxed patio lunch followed, with a variety of birds keeping us on our toes. A red-eyed bulbul perched on a fence, with sunlight highlighting its bright red eye. A Cape scrub-robin and fiscal flycatcher flitted from one tree to another, and a rock kestrel winged overhead.

During a leisurely afternoon stroll amid riverside trees near the farmyard, we flushed a fiery-necked nightjar, and I spotted my first neddicky and bar-throated apalis. One of my fellow birders taught me mnemonics for the coos of Cape turtle-dove (“Work HARDERRR”) and red-eyed dove (“I AM red-eyed dove”). 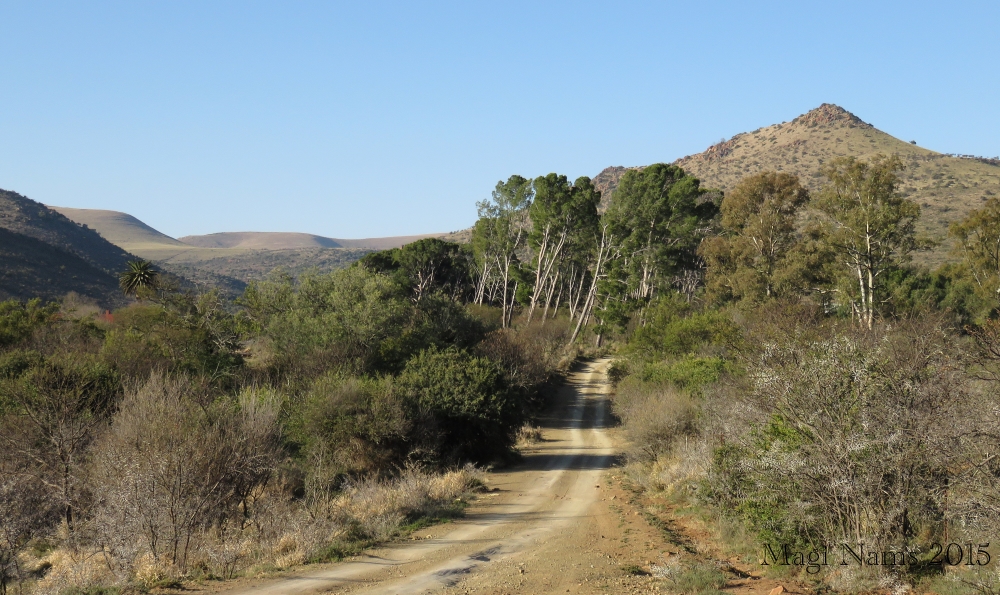 In the late afternoon, we all drove to a large dam for some twilight birding. Red-knobbed coots and little grebes (dabchicks) floated on the water, and a black-headed heron stalked the shoreline. Southern masked weavers and Cape weavers buzzed and squawked their rowdy cacophonies. Egyptian geese winged over the dam, and an African fish-eagle, perched in a tree on the dam’s far side, seemed to hold court over the entire scene. Five kudu (two of them, rams) foraged on a hillside backing the dam. 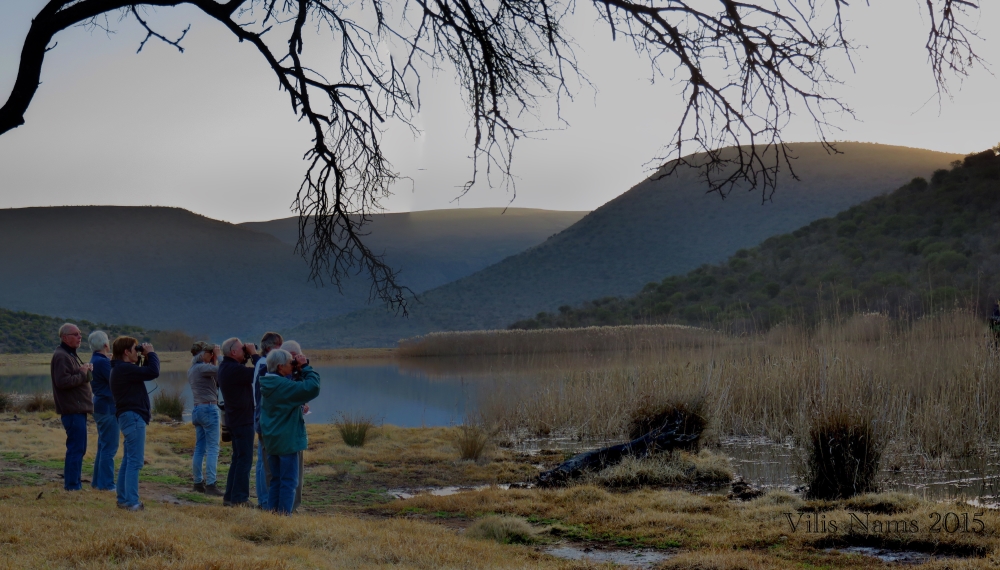 At dawn on Sunday morning, ground fog swathed the valley in mist.  We bundled up and headed out in search of a spotted eagle-owl that had been heard hooting before daylight. We flushed the owl from a tall tree beside the river, heard brown-hooded kingfishers calling along the waterway and saw male and female chinspot batis, the male singing its distinctive “three–blind–mice” song. Another highlight was a black cuckoo-shrike with yellow epaulets in full sunlight. Gorgeous! We also came across a morning “bird party” (congregation of mixed species) in a cluster of trees near the river. Yellow-fronted canaries and masked weavers sunned and preened. Long-billed crombecs darted from trunk to branch.  A Karoo prinia and chestnut-vented tit-babbler flitted in the trees. We flushed bushbucks from cover and again heard a baboon sentry shouting from high atop the hills. 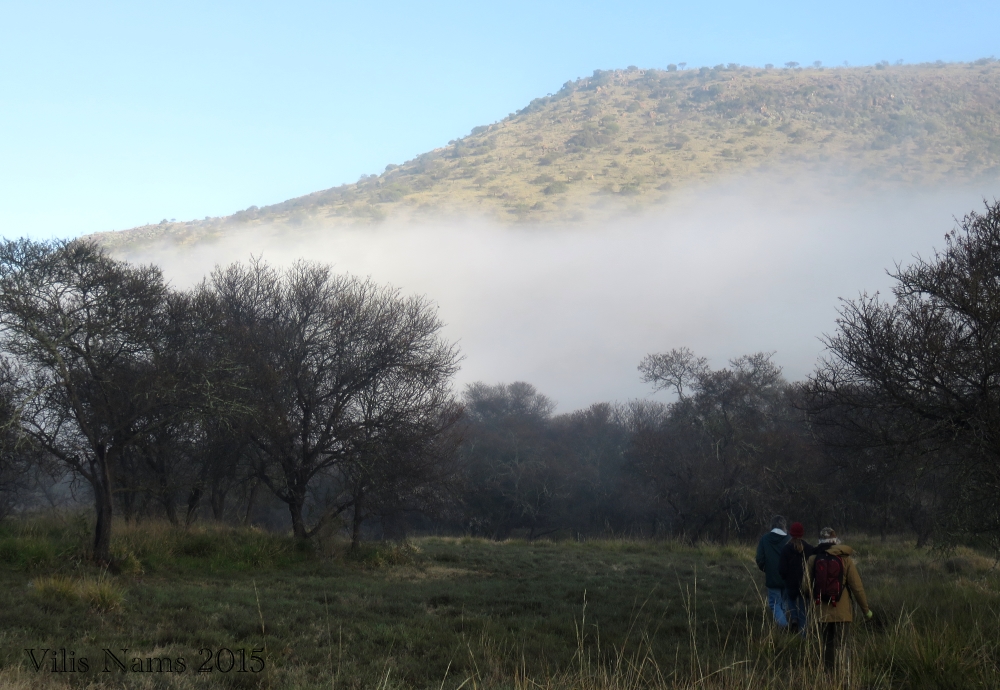 In mid-afternoon, we piled into a bakkie (small pickup truck; in this case, a Toyota Land Cruiser) and travelled higher into the hills until we reached grassveld at over 1,300 metres elevation. 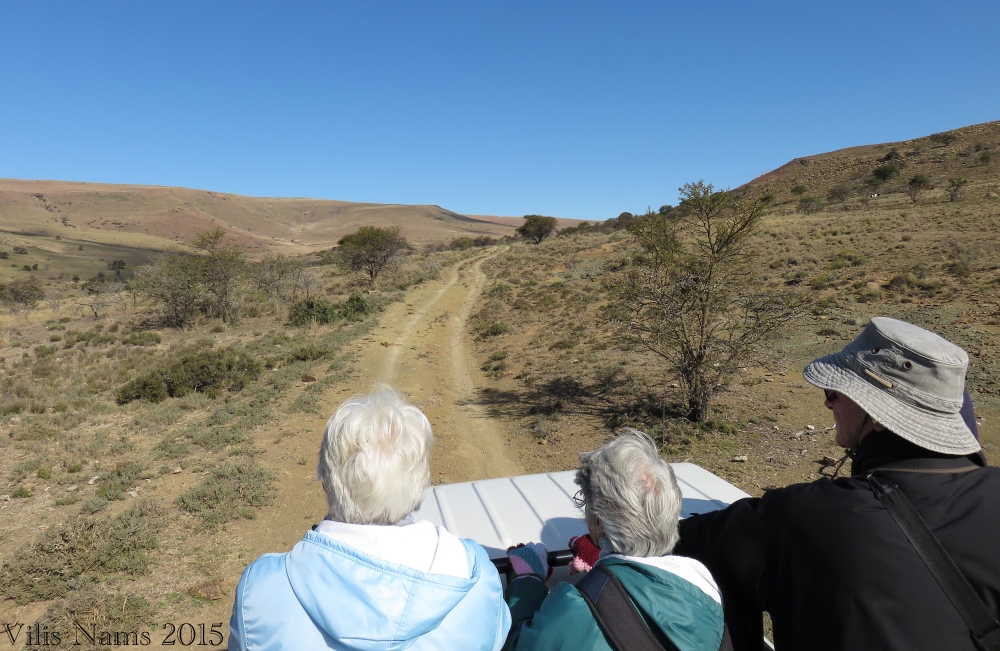 In the Bakkie (© Magi Nams) 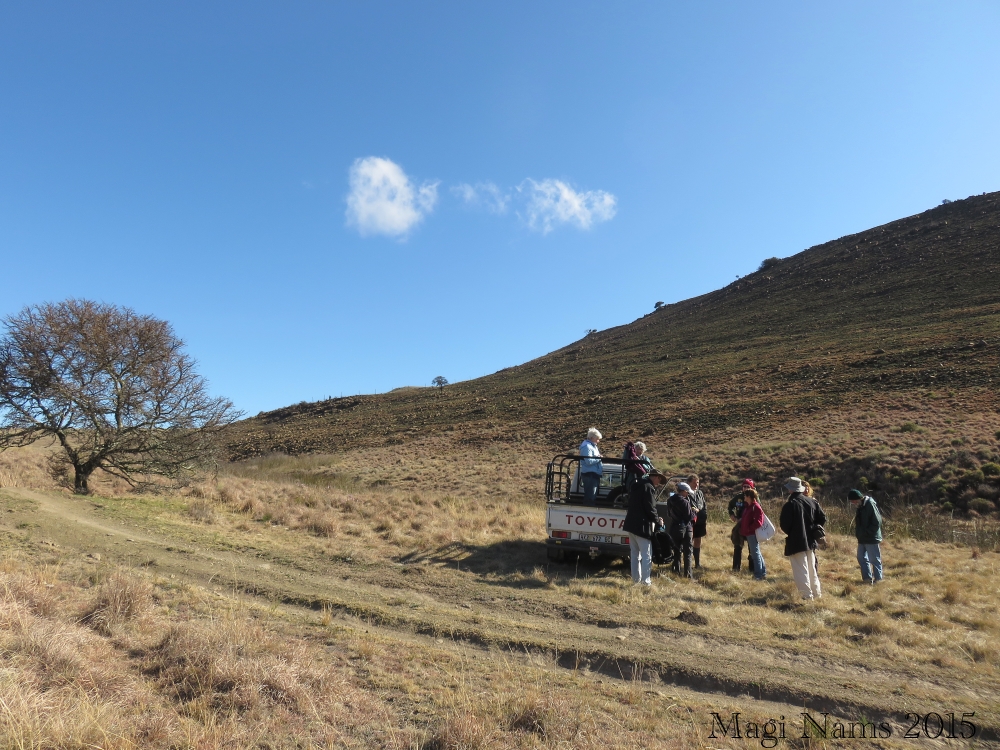 We birded our way downslope through the winter-dried grasses and along a rocky watercourse. Piles of crushed crab shells marked an otter’s latrine area on one rock ledge beside the stream, and we spotted a ground woodpecker atop a high rock ledge bordering a gorge. Four mountain reedbuck foraged on a rocky, west-facing incline in the late afternoon sunshine, and once again, we heard baboons – this time, an adult’s growls, followed by a youngster’s squeals. It sounded like someone was receiving the baboon equivalent of a spanking! 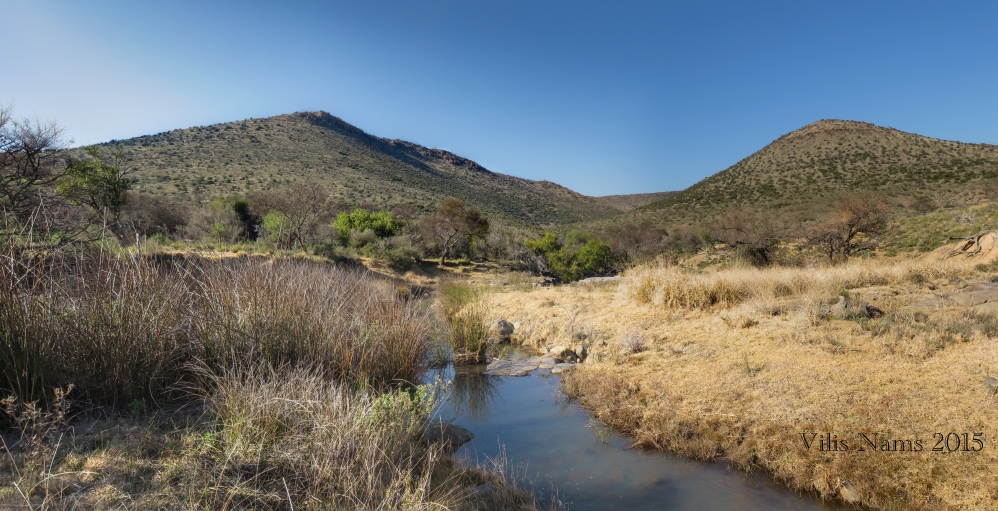 For a perfect ending to our second day of birding in Baviaans River Valley, we scrambled among a jumble of massive boulders, searching for and then viewing rock art depicting cattle, perhaps painted by the San, or bushmen, Southern Africa’s indigenous people. 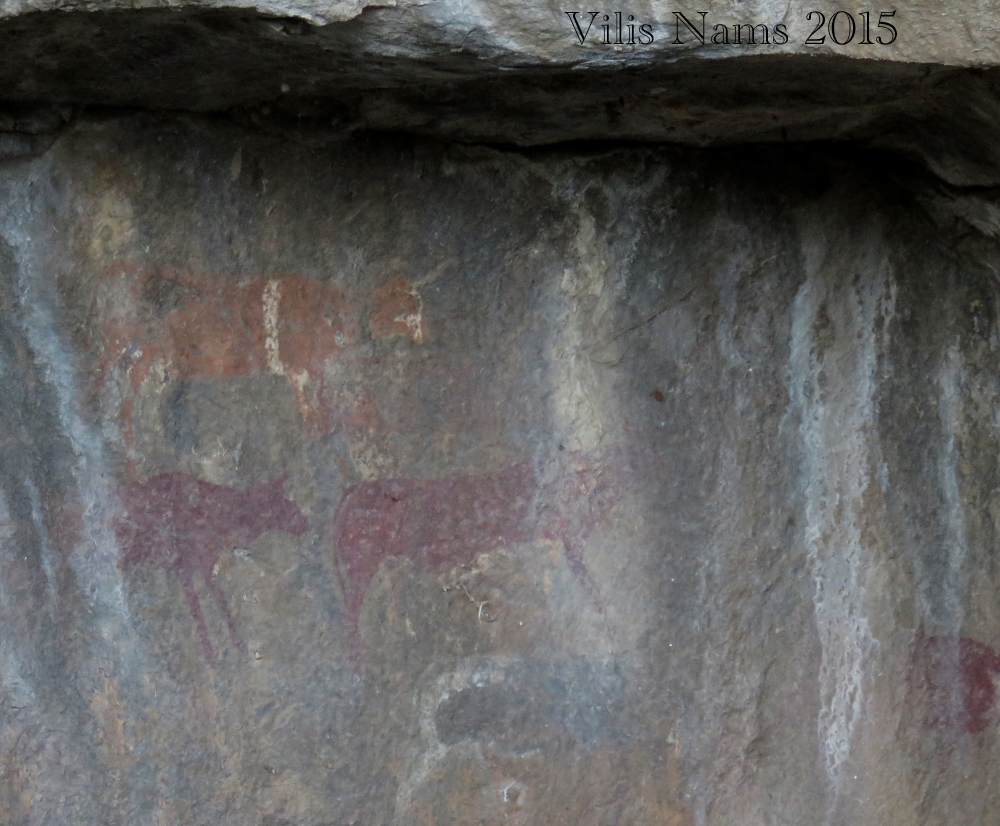 A chilly Monday morning yielded fewer avian sightings and no “bird party.” However, I did see my first scrub hare bounding through the thornveld and got quite a jolt when two warthogs exploded out of a riverbank burrow. The male charged over the bank and ran straight at me and another birder before veering away amid a cloud of dust. The female bolted down the bank and along the river. 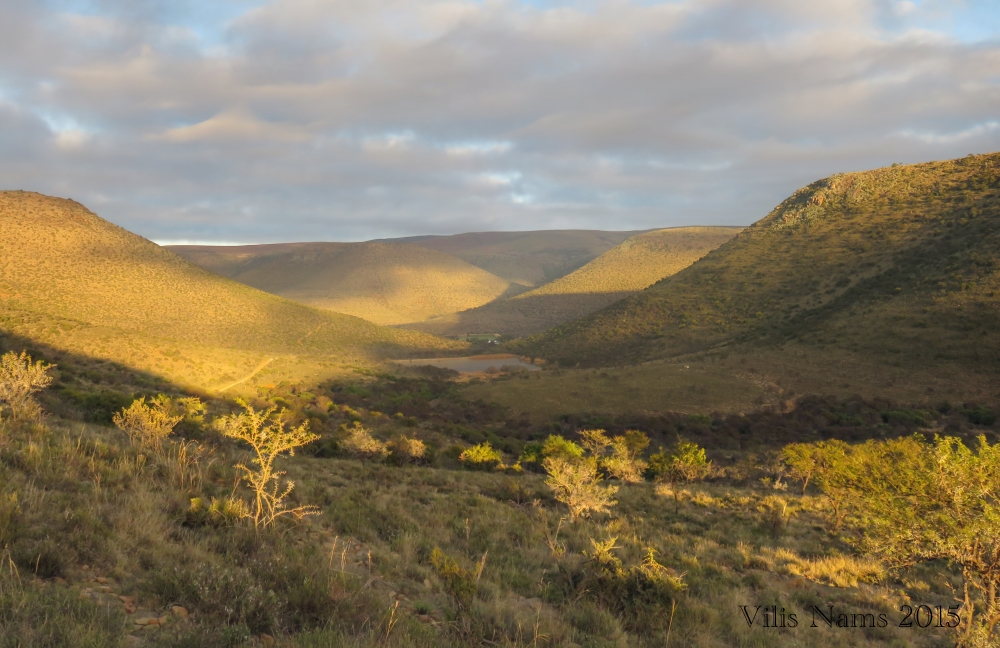 We heard more baboon shouts – perhaps a warning that the sentinel had sighted Vilis, who had climbed one of the rocky peaks to photograph the spectacular scenery.

For our final outing of the long weekend, nine of us drove upcountry again, this time to Hyndhope farm high on the grassveld. Pied starlings pecked on the ground near winter-thin horses. White-necked ravens skimmed over the peaks. The grassy hills stretched on and on, ever inviting.

All in all, it was a great weekend of birding in Baviaans River Valley made complete by the wonderful company, abundant mammal sightings and the magnificence of this valley of rock and thorn. 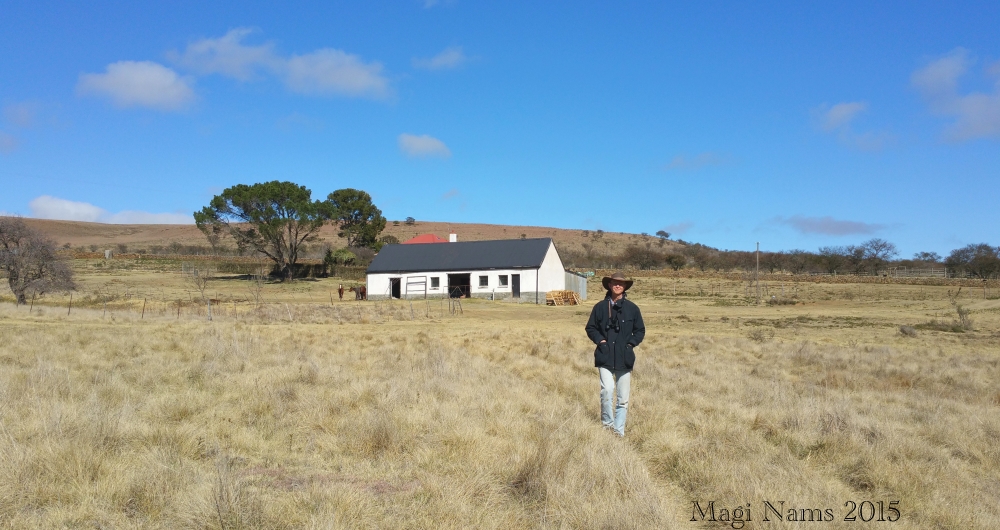