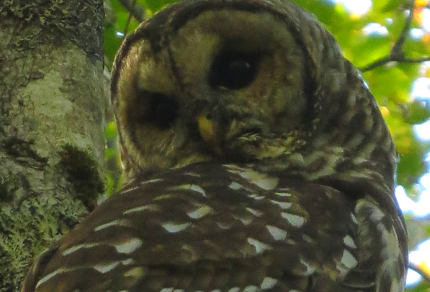 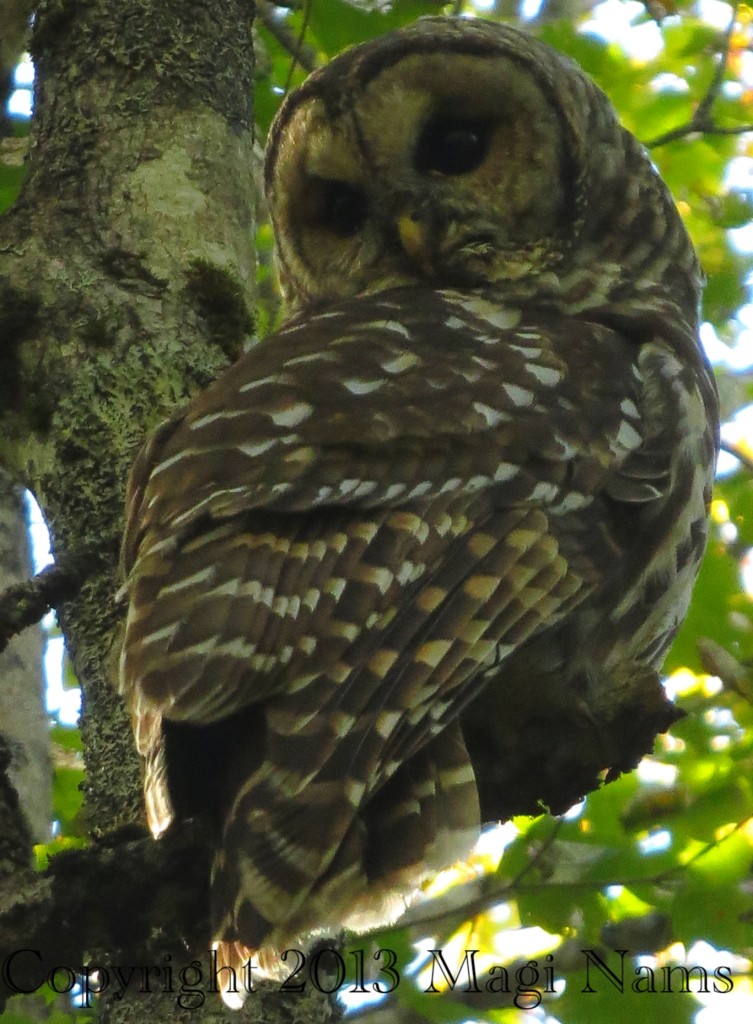 Chocolate-brown eyes. Throaty voice. Handsome as all get-out. George Clooney, right? Undoubtedly, but the description fits a barred owl, tooooo. Vilis spotted the one in the photo at right while he and I were hiking in hardwood hills near the Wentworth Youth Hostel in northern Nova Scotia in late September. We’d likely roused the owl from sleep. In fact, it nodded off a few times, closing those gorgeous bedroom eyes, while we observed it for ten minutes and then went on our way.

Barred owls occur throughout Nova Scotia and are fairly common. I’ve heard their raspy barked “Hoa-HOA-hoa-HOA-hoa-HOARRR” while camping in Kejimkujik National Park in the province’s southwest, and in our woods near the north shore. Five years ago, Vilis and I did a few hooting surveys for the Maritimes Breeding Bird Atlas and heard one boreal owl, three great-horned owls, and nine barred owls. During one memorable May survey, a very agitated pair of barred owls almost dive-bombed me while I stood outside my car listening for responses to the hooting CD. The two birds perched with wings outspread in nearby trees and rent the oncoming darkness with their wild cries. No doubt, they intended to oust the invader in their breeding territory. Although chiefly nocturnal, barred owls do sometimes call during daylight hours. I’ve heard them in early morning and evening and occasionally during the afternoon.

Barred owls are year-round residents here in Nova Scotia, where they inhabit coniferous and mixed wood forests. Their breeding season extends from late March through early June (1), and as mentioned above, a pair will actively defend its breeding territory. The female lays two or three eggs in a cavity in a tall tree or in an abandoned hawk’s nest, and the male feeds the female while she incubates the eggs for about a month until they hatch. Nestlings are able to fly after forty-two days. The female is the primary caregiver for the young, but the male helps out. The owl parents care for their young for four months or longer. (2) With this being the first week in March, it won’t be long now until those raspy barked calls ring out in the woods around us again.