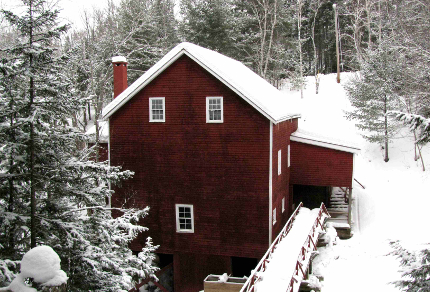 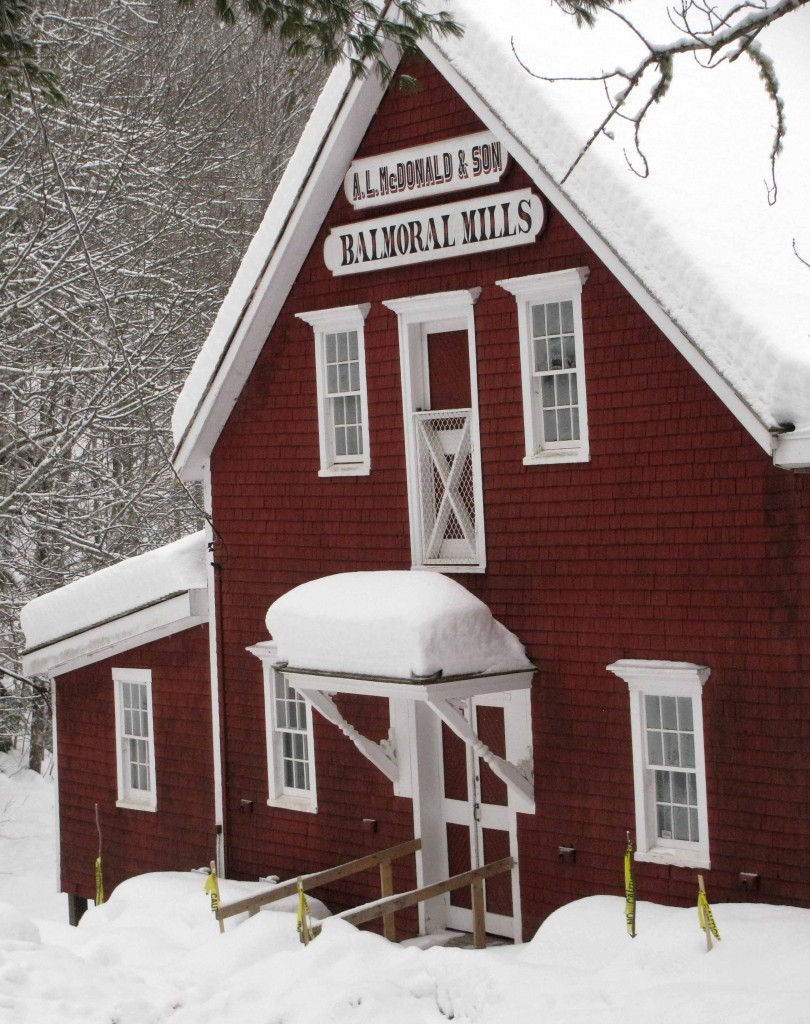 This morning, beneath a sky overcast and still (the lull before the snowstorm forecast for tomorrow) I walked to the Balmoral Grist Mill, a heritage building dating from the late 19th century and located in the heart of Balmoral Mills, the small community in northern Nova Scotia in which Vilis and I reside. Now part of Nova Scotia Museums, the mill is a working museum that grinds grains from June through October, producing stone-ground buckwheat and wheat flour, as well as oatmeal, the last thick and delicious when cooked and topped with maple syrup. That oatmeal possesses a distinctive smoky flavour, the result of the raw oats being roasted at the mill on a metal oven floor above a fire of rock (sugar) maple, before being hulled and ground.

Now a tourist and school attraction – and a venue for a rustic dining experience – the mill once served local farmers, transforming into the staples of a pioneer diet their grains grown on the kind of hills on which one can imagine a piper blasting rolling strains of bagpipe music over the surrounding countryside. Today, however, the mill was silent, its roofs and smokestack neatly coated with a marzipan-like layer of snow. A red squirrel – the first I’ve seen since returning from Australia – scampered across the snow near the millpond and into a thicket of mixed trees, leaving clear evidence of its leaps in the snow. 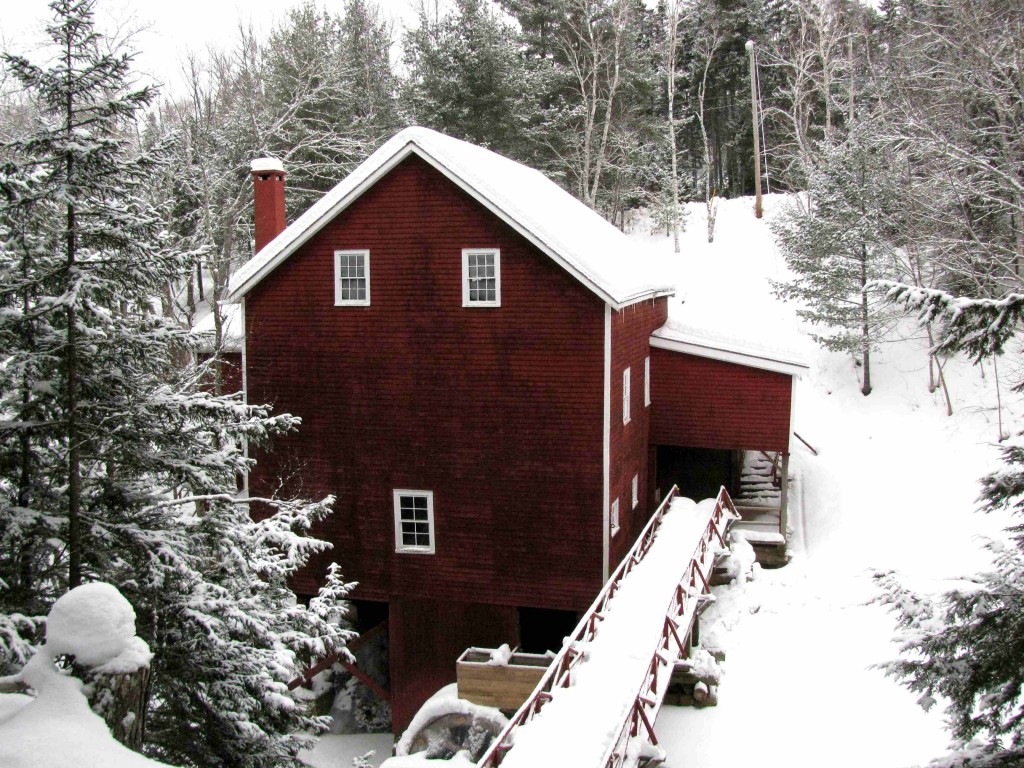 Snow, which today rimed twigs and branches and lay in tidy beauty on the mill and ground, presents an obstacle to locomotion for animals active throughout the winter, notably mammals. The red squirrel I observed – a relative lightweight – dashed into shelter without floundering, its tracks neat, box-shaped collections of footprints spaced the length of its bounds. Even lighter, deermice also hop along on the snow surface, revealing their identity through drag marks made by their long tails. Two of the North’s most highly adapted mammals regarding movement in snow – the prey-predator pair of snowshoe hare and Canadian lynx – distribute their significantly greater weights over the snow surface on broad paws having toes edged with fur to build a wide platform for weight distribution. Surprisingly, I’ve seen only a few snowshoe hare trails during the past month, leading me to surmise that the population of this cyclic species is at a low in its ten-year cycle. Snowshoe hare tracks are easy to ID, with the big hindpaws landing ahead of the smaller forepaws, indicating the direction of travel.

The above-described mammals and our resident winter birds, when on the ground, navigate snow by travelling on top of it, as evidenced by the tracks of ruffed grouse, crows, blue jays, and chickadees in the snow of the forest and our yard. (Grouse will also bed down in hollows in the snow and explode out rather startlingly in the morning.) I’ve also spotted the tracks of red fox and coyote that meandered through nearby woods or meadows, punching paw prints more deeply into the snow and taking advantage of our cleared access road and Balmoral Road for part of their journey. 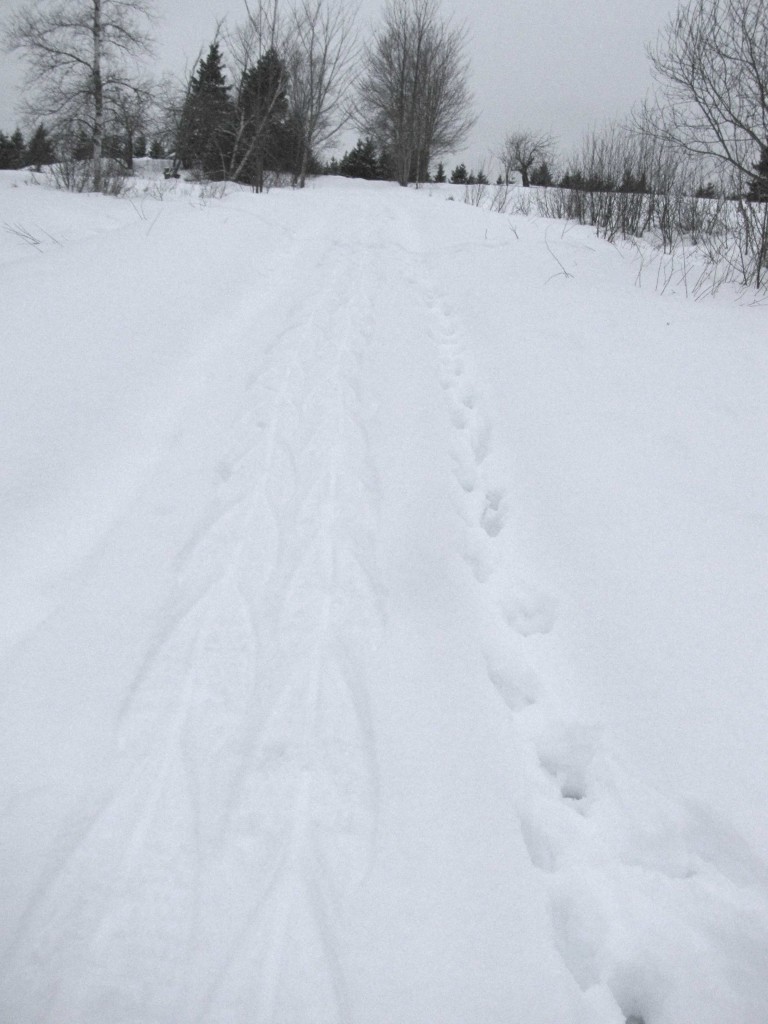 The most common mammal I have seen since my return – the white-tailed deer – utilizes any cleared or hard-packed space available – notably roads, the frozen-over surface of Matheson Brook, and even my snowshoe trails – to ease energetically-costly movement in deep snow (think small, sharp hoofs and long, skinny legs). Nearly every day, I see either a trio of deer or a small herd of five passing from the woods above the brook through the spruce/meadow parkland below our house, where they pause here and there to tear twigs from wild apple trees growing in the meadow. They lift their feet high as they step forward and follow single file in regularly-used trails, bounding in huge leaps when startled. While out snowshoeing, I frequently encounter deer trails in which the hoof prints are  half a metre or more below the snow surface, and far below the prints of my snowshoes. If the snow remains (sheer speculation in a province nearly surrounded by the Atlantic Ocean), this may be a hard winter for deer. 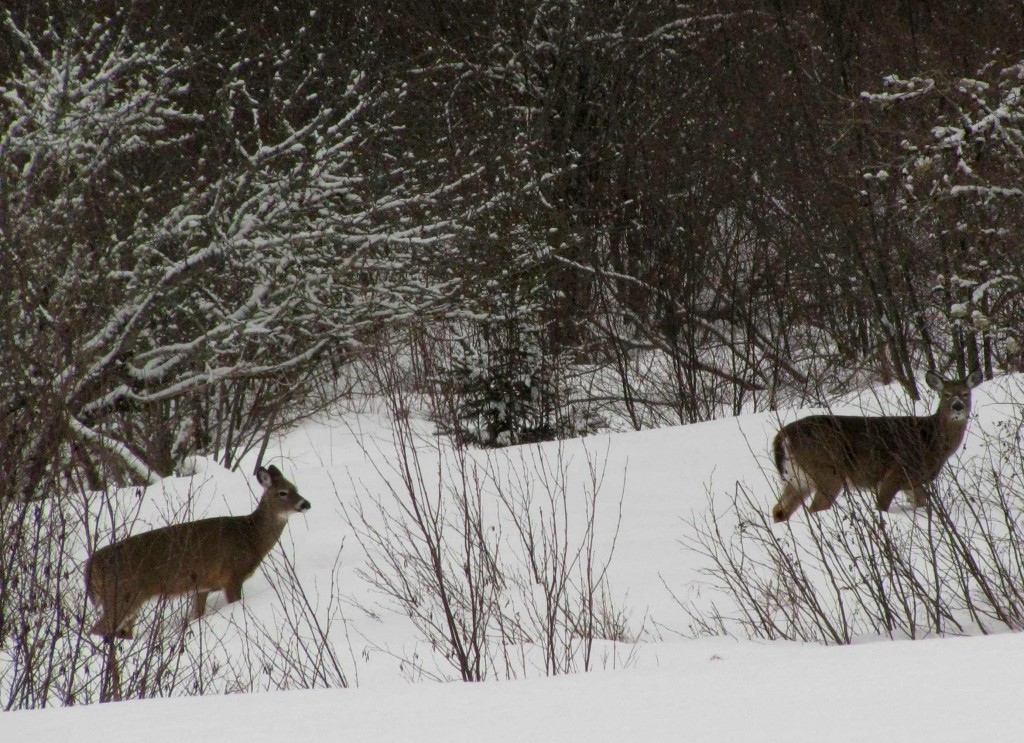 However, what is a hard winter for one animal may be a boon to another. Beneath the deep snow of our meadows, although unseen by me, meadow voles (field mice) will undoubtedly have dug out a system of tunnels through the snow at ground level, allowing them safe passage below an insulating blanket of snow that protects them from the deadly cold of winter. One day, I followed a fox trail through the meadow to a point where delicate paw prints ended in a smashed-in cavity in the snow, indicating that the fox had made a pounce – likely for one of those hidden but not unheard meadow voles. I wonder if it caught it. 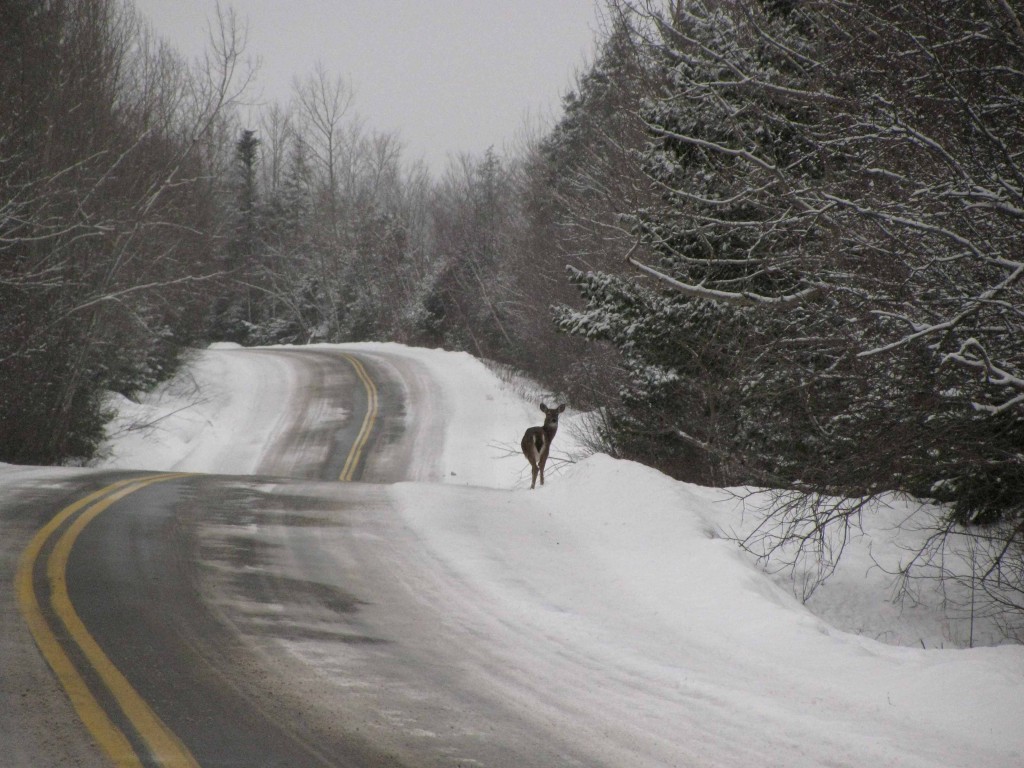