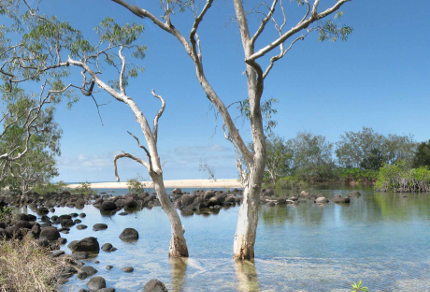 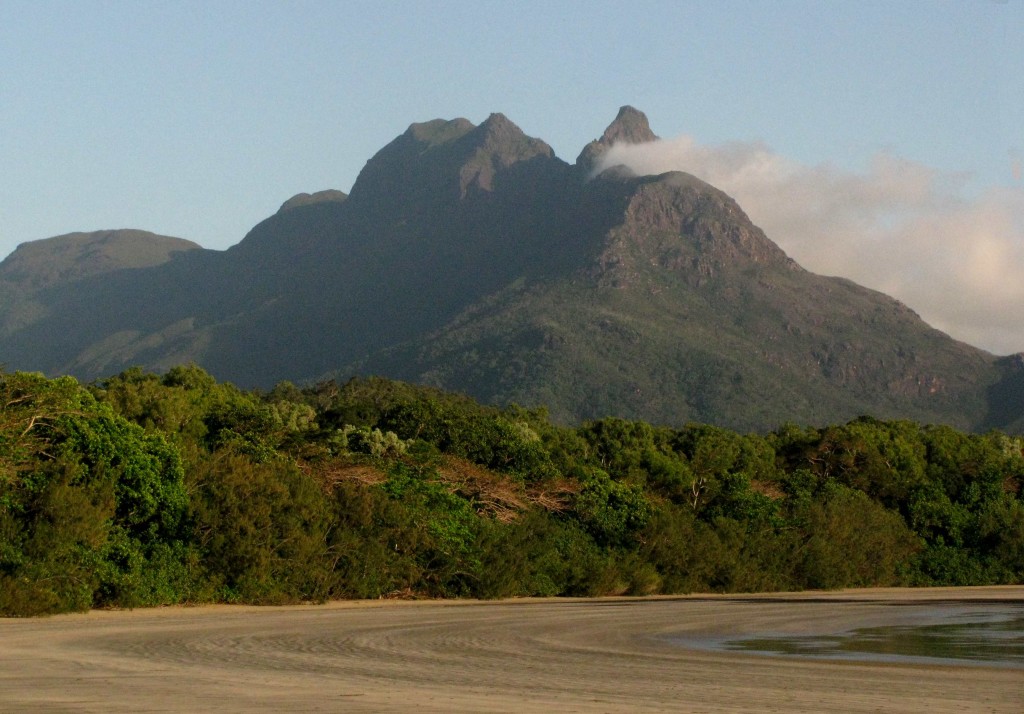 Hinchinbrook’s dawn chorus of birds rang out loudly in lifting darknes. Increasing light revealed clear skies except for wisps of white cloud clinging to The Thumb, a thrusting pinnacle east of Mount Bowen, the island’s highest peak at 1121 metres. Vilis toasted bagels over our campstove for breakfast, after which we broke camp at 7:15 a.m., knowing today’s hike of 10.5 kilometres between Zoe Bay and Little Ramsay Bay would be the longest of our Thorsborne Trail adventure.

As we walked out onto the beach, the mangroves edging the mouth of South Zoe Creek appeared emerald green in the morning light, and wave-washed sand patterns lay spread before us in exquisite installations of ephemeral art. Varied trillers flitted among the branches of mangroves and she-oaks bordering the beach, and I caught glimpses of a female flycatcher and kingfisher. 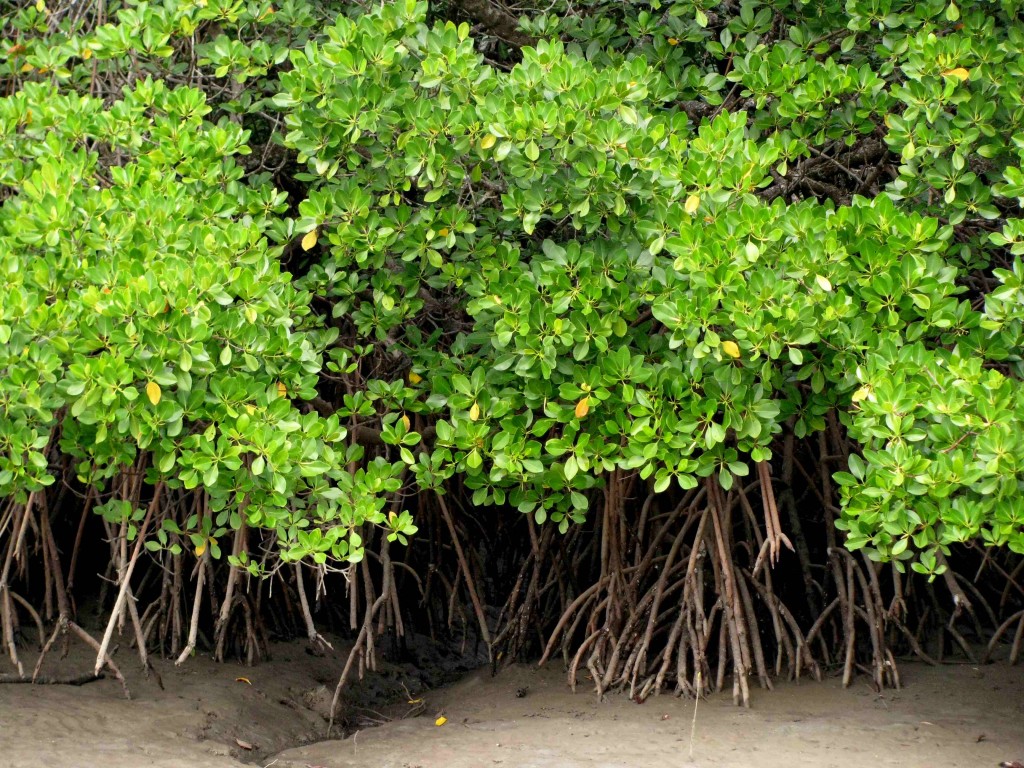 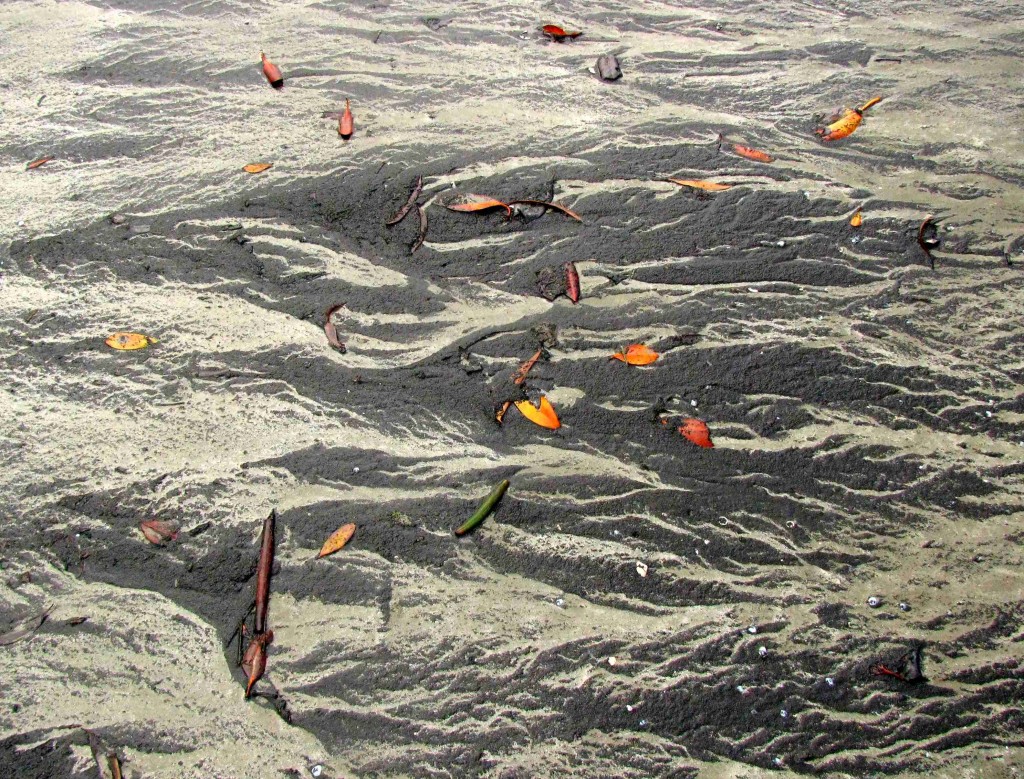 Entering the forest, we passed by towering, thick-boled paperbarks with soft layers of pale bark that felt absorbent to my fingers, causing me to appreciate why Aboriginal peoples had used such bark as liners for baby baskets. Slim, black-trunked mangroves stood like sentinels in a mucky swamp, beyond which we hiked past granite faces which Vilis likened to the mysterious rock statues of Easter Island. We slopped through more swamps and tramped past more granite faces as we crossed the lowland adjacent to Zoe Bay, one swamp having knee-deep mud, and others vegetated by gnarled, tortured-looking mangroves reaching out with begging limbs. A brown crab brandished a vivid red claw in defence at us, and a little shrike-thrush called its ringing notes. 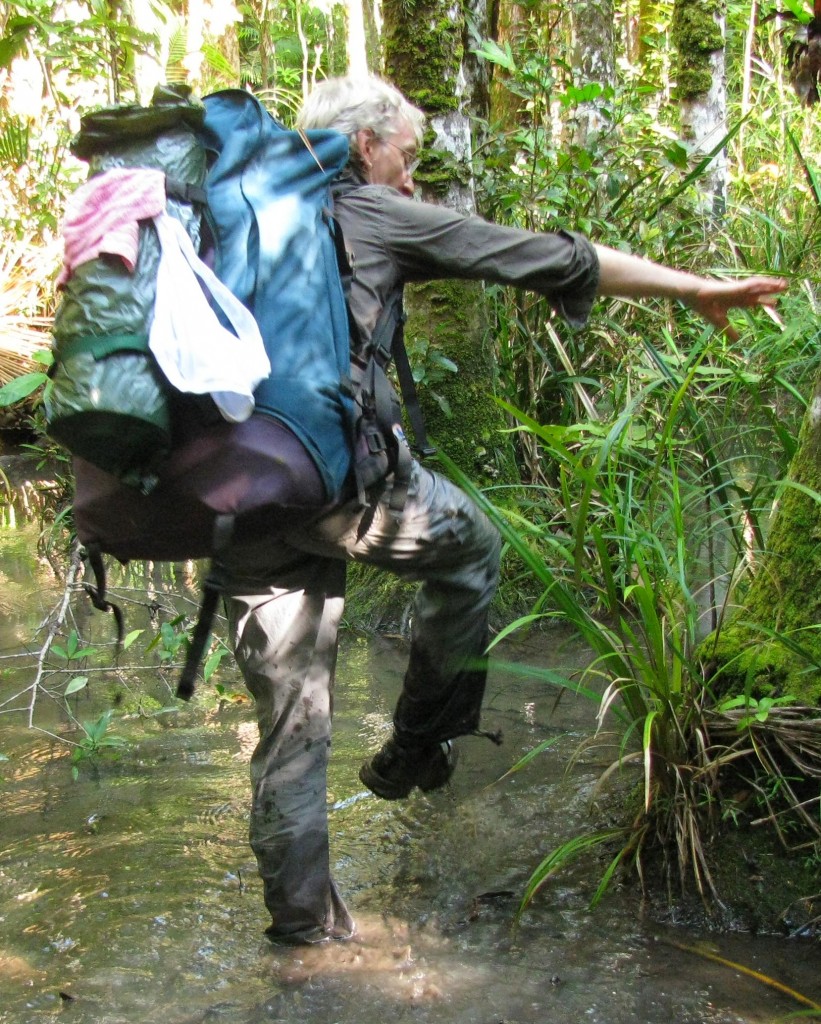 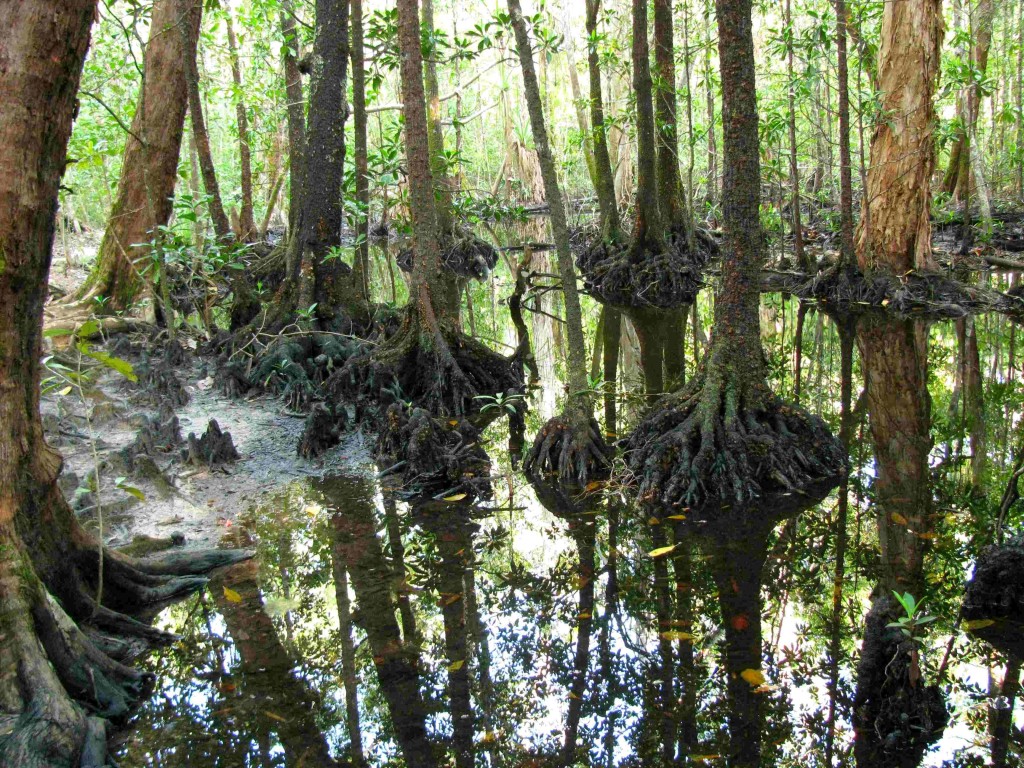 Habitat after habit greeted us as we proceeded northward – salt pans near mangrove-edged streams, stunted paperbark woodland with an understory of vivid grasses, rainforest with flaky-barked satinash trees and tearing tendrils of lawyer cane, palm swamps, paperbark/pandanus woodland, and Banksia shrubland surrounding Banksia Creek, where we paused to remove our shoes and refresh our bare feet in cool, flowing water. 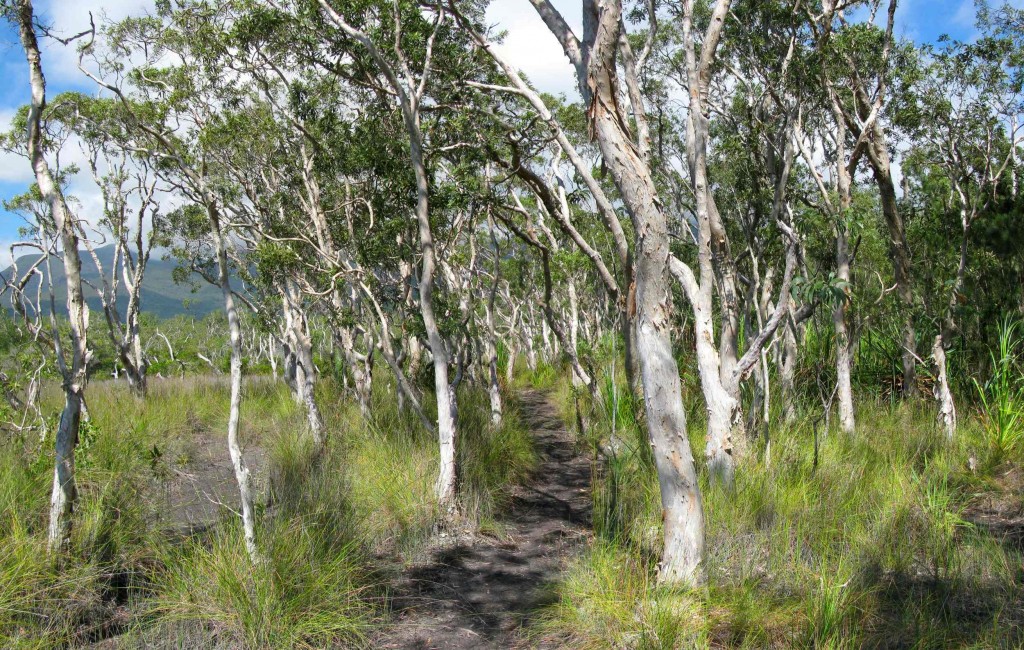 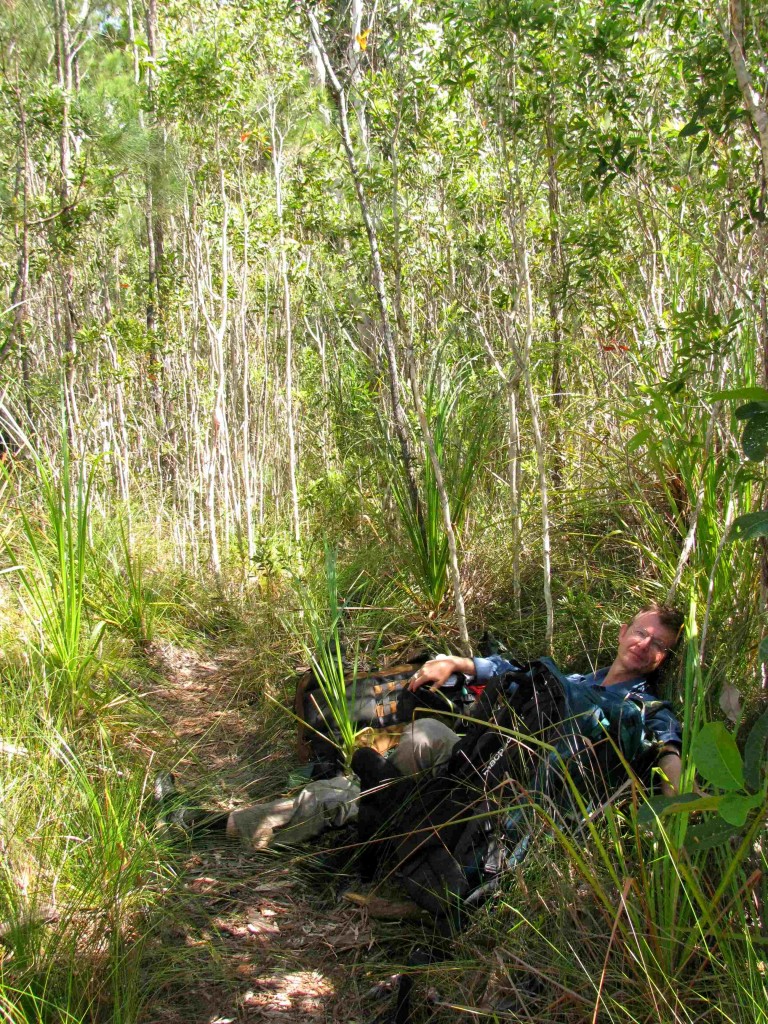 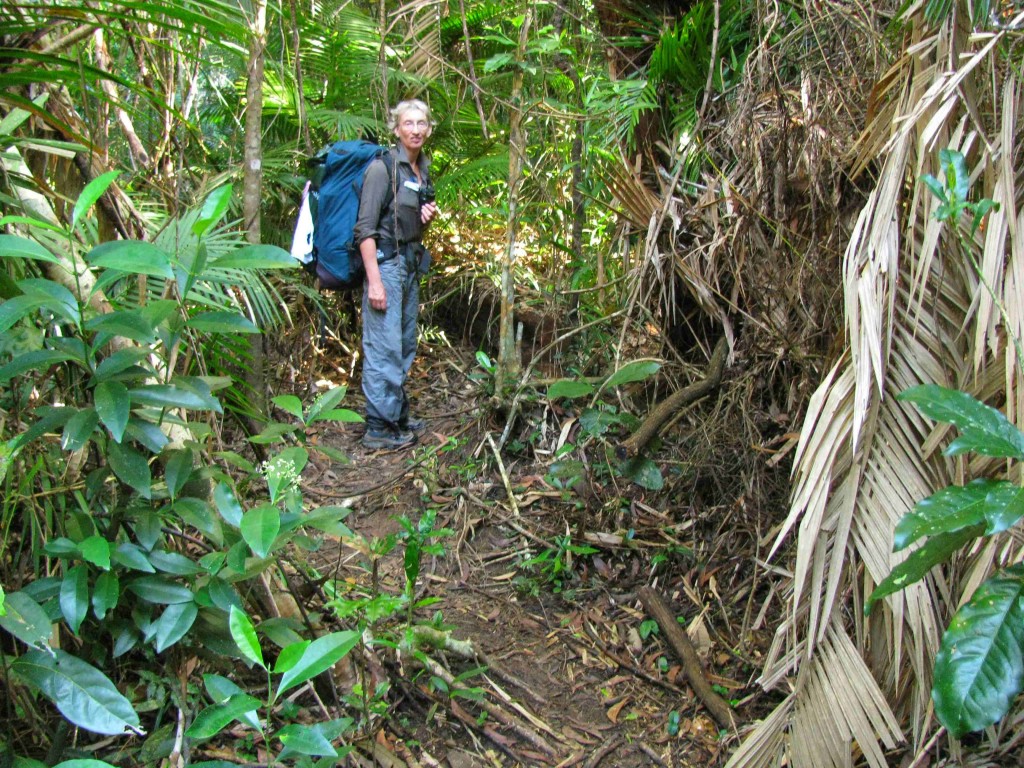 Although we again crossed many streams, the terrain was far less challenging than that we bushwalked yesterday, with many level stretches and only one upland saddle – that between Zoe Bay and Banksia Bay. Following triangular trail markers attached to trees became an intriguing quest in the swamps, as well as at North Zoe Creek, where we cautiously angled across the shallow, rock-strewn creekbed in search of the marker on the far side. There was an element of dark humour in the fact that the marker on the south side of the creek had directed us across to an unclear destination on the far side, while a nearby crocodile warning sign had cautioned us to stay away from the water’s edge and not enter the water. 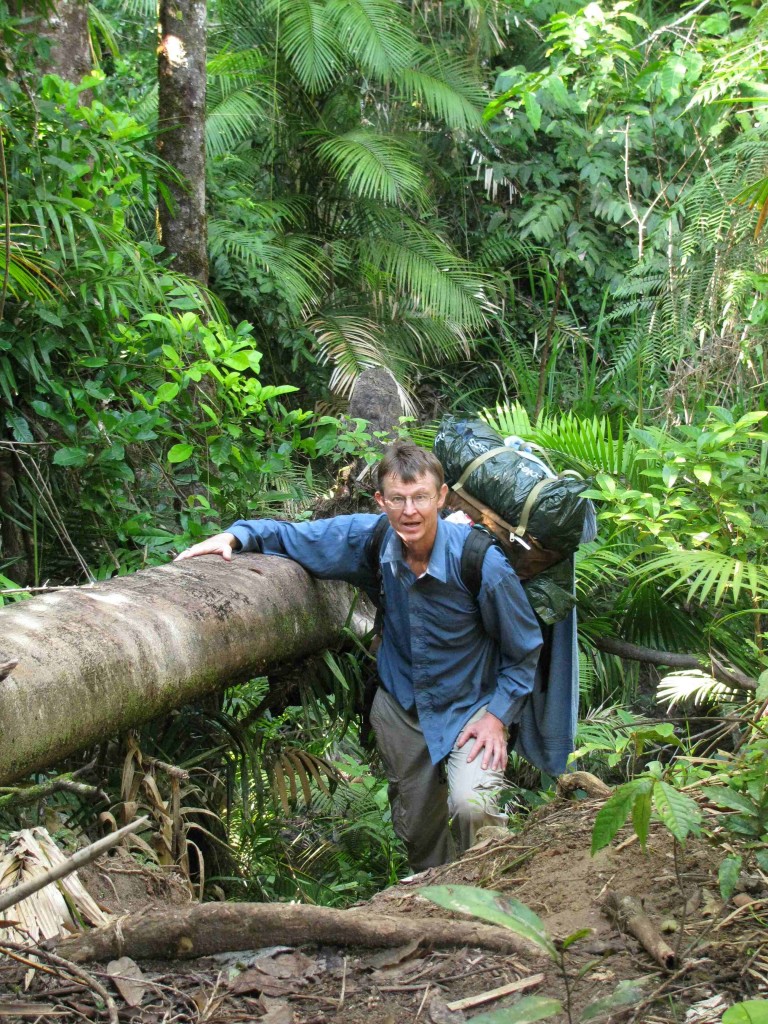 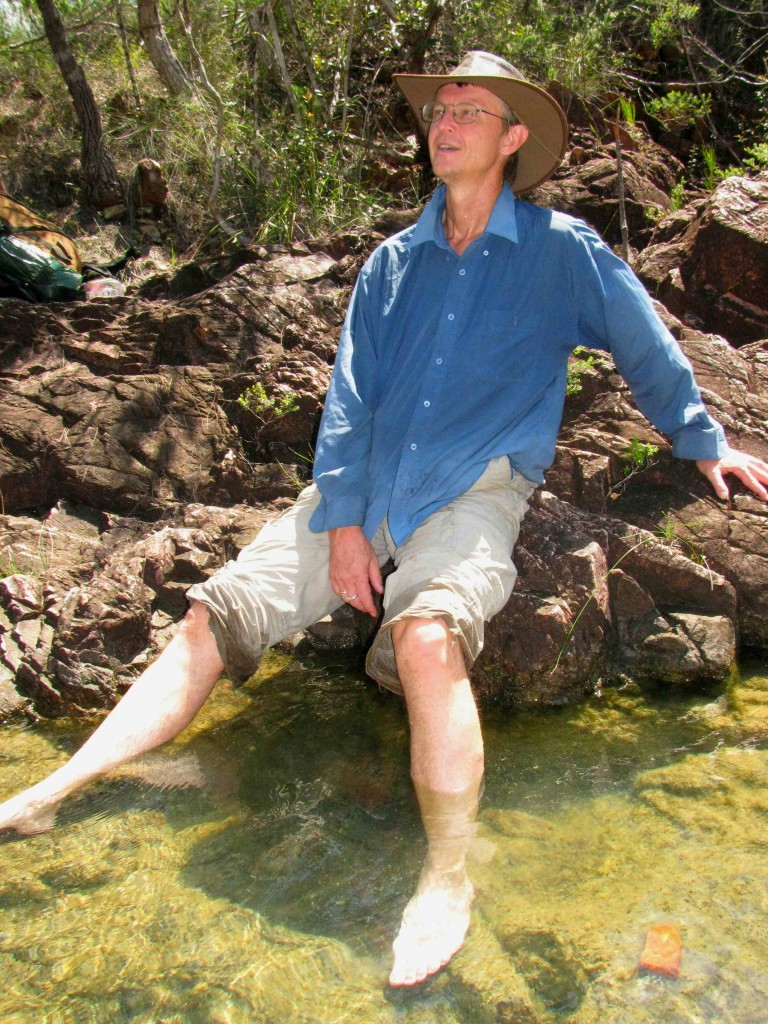 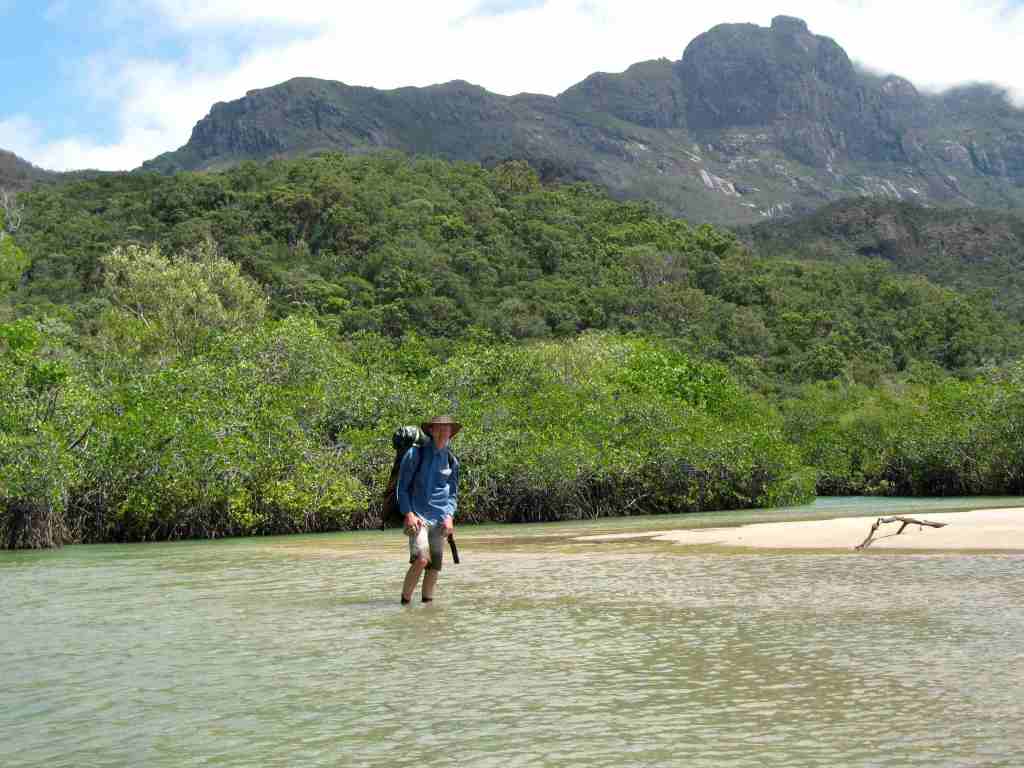 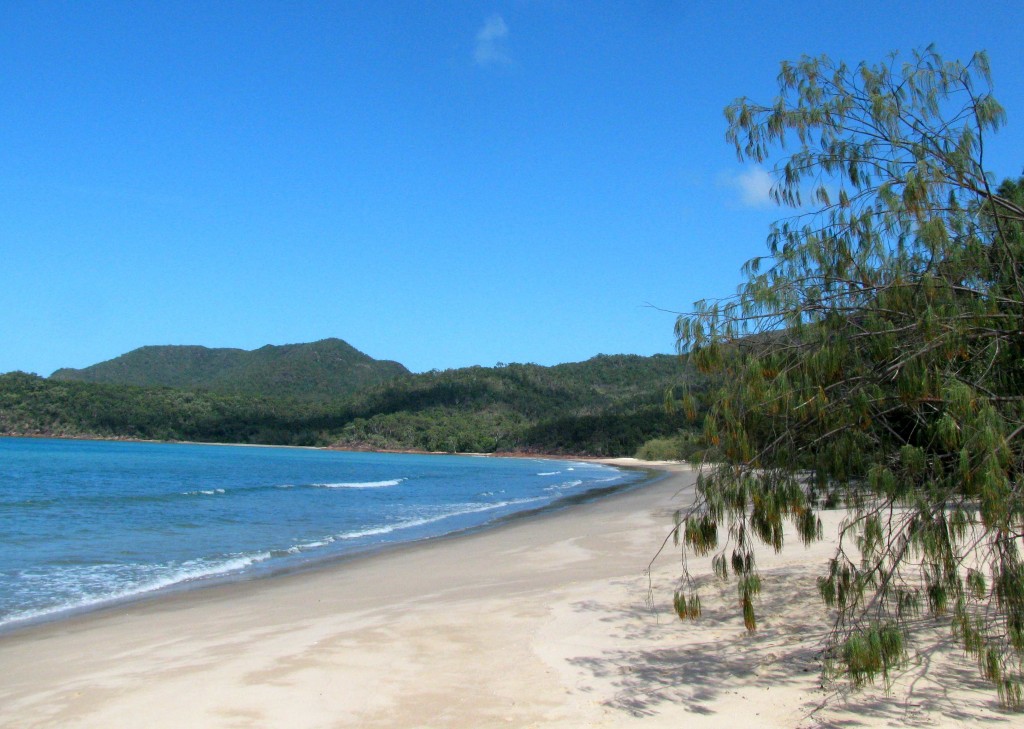 As we approached Little Ramsay Bay, we rock-hopped around a headland and waded a tidal stream to reach the beach. Five hours after leaving Zoe Bay, we set up camp in dry, open woodland behind the beach, washed sweaty clothes in a lagoon caught behind a long beach dune, and refilled water bottles from a sluggishly-moving creek dribbling into the lagoon (after which we treated the water with zinc chloride tablets, as we had all our creek water). Then we lazed away the sunny afternoon. Vilis read, and I birded in the shade. Before darkness crept in, we took a dip in the lagoon, all the while carefully watching for crocodiles, since another camper informed us that she’d heard that a small croc had been seen in the lagoon yesterday. Our six fellow campers, most of whom were from Germany, revelled in the beach, the lagoon, and in the ankle-deep estuarine creek emptying from the lagoon into the ocean. Children reappeared in adult form. Young men engineered sand structures within the creek, and buxom, middle-aged women frolicked in the breaking surf. 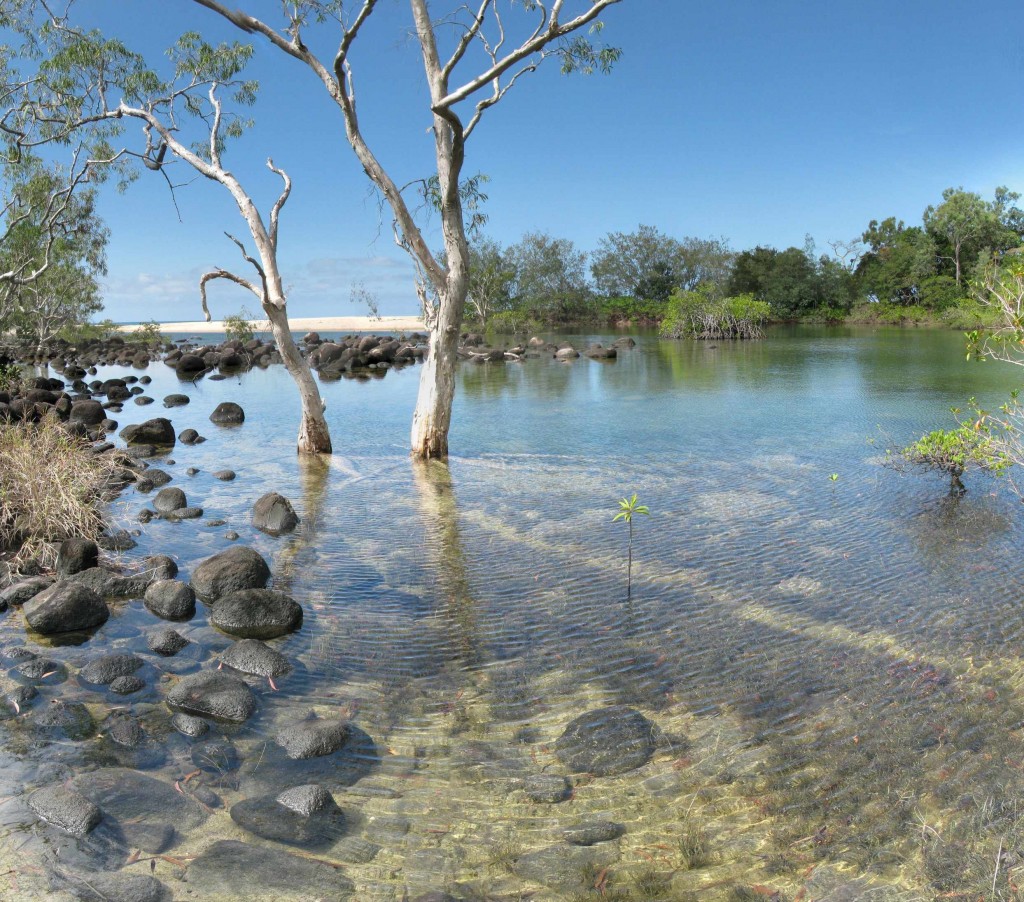 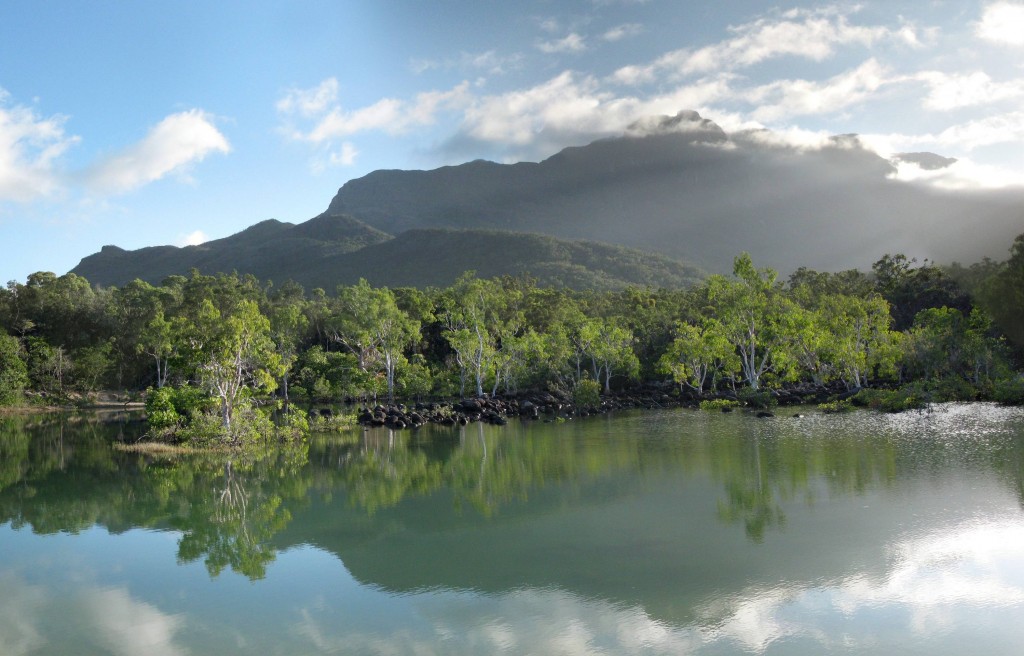