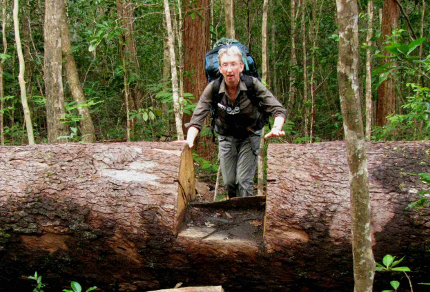 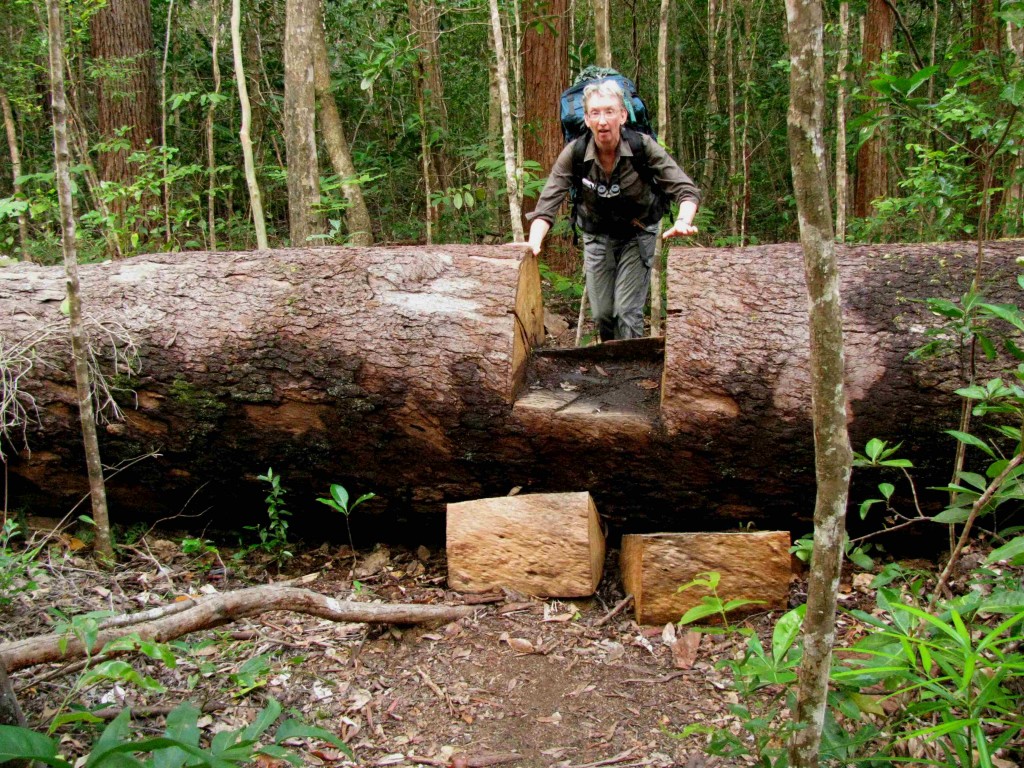 Breaking camp at Nina Bay an hour after sunrise, Vilis and I retraced the path we’d hiked yesterday to reach the trail to Nina Peak. Once again, we walked alongside mangroves bordering the creek emptying into the northern end of Nina Bay, and then through open woodland dominated by grey-barked gums with wildly-twisting limbs. The latter, I noted from our trail notes, were called gympie messmates, a name that caused me to wonder at its origin.

Beyond the cairn-marked side-trail to Nina Peak, we descended from the low upland saddle through more open woodland and then onto the southern end of Ramsay Beach, an expanse of pale sand that stretched northward for kilometres. She-oaks anchored the sand dunes bordering the beach, their long, needle-like branchlets hanging vertically and creating elegant, weeping canopies. 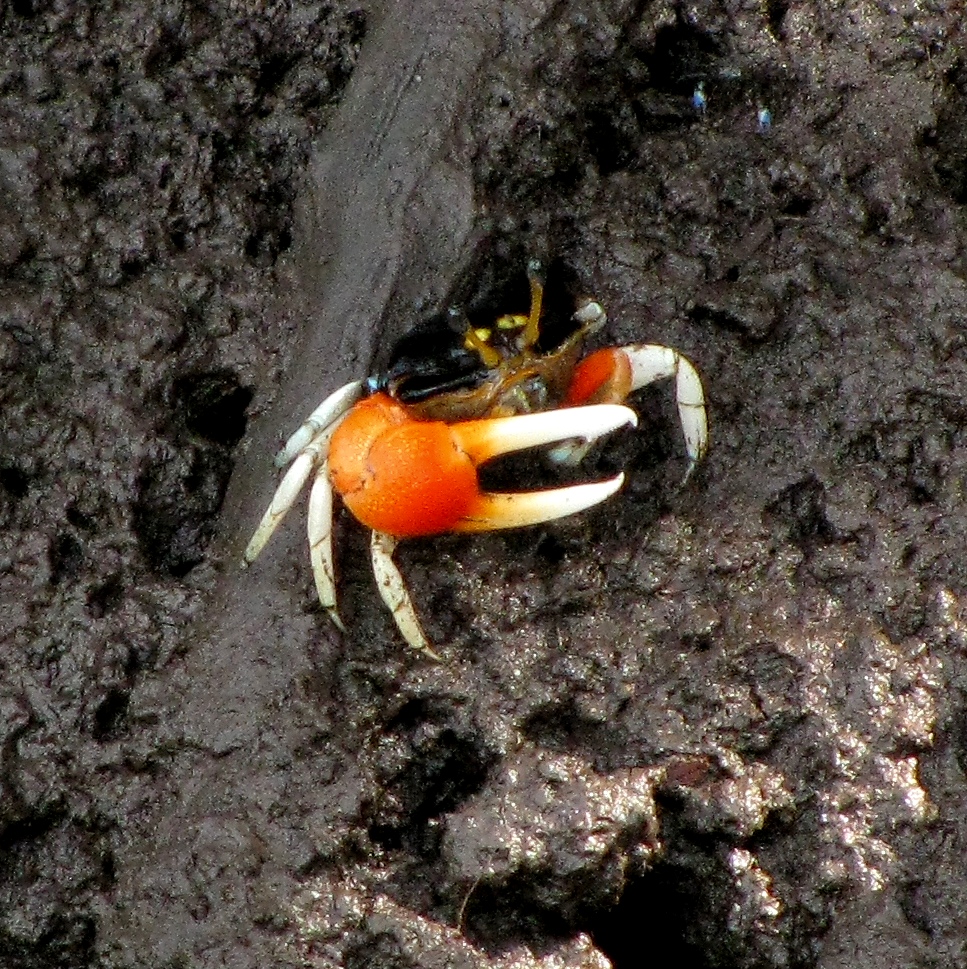 Crossing over the dunes, we traced the last of the Thorsborne Trail through open, stunted shrubland on a mudflat marked with dingo tracks, and then reached a floating dock via a boardwalk through dense stands of mangroves. The salt-tolerant trees formed an impenetrable tangle, their curving prop roots elevating the trees above black, intertidal mud inhabited by small crabs having vivid orange and white claws and eyes atop stalks. We rested in shade on the dock and heard surf pounding onto the sandy beach on the other side of the narrow strip of dunes we had earlier crossed. 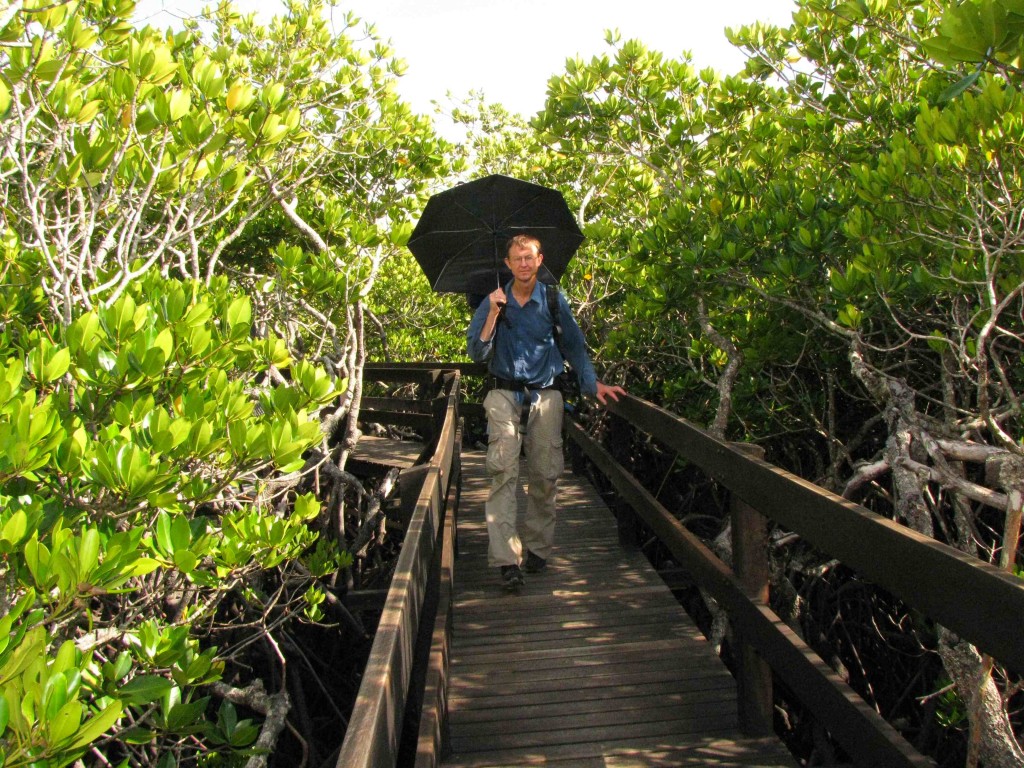 At 10:30 a.m., we boarded a small boat sent by Hinchinbrook Ferries to retrieve us and two other backpackers we’d seen briefly on the trail this morning. As the boat moved along the murky inlet edged with mangroves, Vilis and I scanned the water for crocodiles, but saw none. The boat ferried us to the Hinchinbrook Explorer II, a covered, double-decker ferry anchored in the inlet. This larger vessel conveyed us out beyond the mangroves into Missionary Bay, and then to the Hinchinbrook Island Wilderness Lodge (temporarily closed due to storm damage) at the northeast tip of the island in order to make a fuel drop.

For an hour, we explored the resort grounds, spotting hefty golden orb web spiders in the centres of their giant webs, and lace monitors, one pressed flat against the ground to soak up the sun’s heat. Then we returned to the ferry and rested inside, out of the showers that pelted down onto the boat and bay.

Just before 2 p.m., we arrived at Port Hinchinbrook, the marina near Cardwell, and caught the bus we had booked to transfer us the 70 kilometres from Cardwell back to Dungeness, where the Kia was parked. After a quick change of clothes in Dungeness, we drove two hours to Townsville, revelling in the car’s air conditioning and anticipating the luxury of showers. Even though we’d broken camp at Nina Bay at 7:30 a.m. and hiked only an hour and a half to Ramsay Bay, we didn’t arrive home until 5 p.m. The showers were bliss, and the cushioning depth of our mattress sheer luxury at bedtime. Finally, after three consecutive nights inundated by the sounds of surf and vociferous tropical insects, I slept.