The Wet and James Cook University 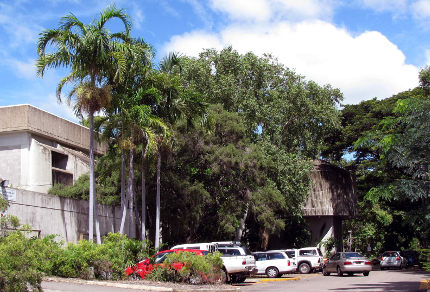 At 3 a.m., I was awake, a victim of my body’s inability to adjust to the 14-hour time difference between Queensland and Nova Scotia. In the bathroom, miniscule ants less than 2 millimetres long formed a somewhat erratically-moving train that climbed a tiled half-wall next to the tub. When the ants reached the top of the wall, they streamed toward a gob of some unidentifiable substance that was already covered with their cohorts. In the kitchen and dining room, more ants were fast-moving, brown bits of biomass cruising the counters and table. Viewing the size, speed, and scouting ability of these intruders, Richard’s message about storing all opened foods in the fridges became clear.

I read more of Into the Jungle in the living room, occasionally jerking into movement to brush tiny ants off my bare legs and arms. They didn’t bite, and I must say that having them crawling over me lent a certain verisimilitude to the prose, although it was fire ants that Henry Walter Bates dealt with during his collection of  more than 14,000 animals from the Amazonian jungles in the 1850’s.1 An unimaginable 8,000 of those animals were new species, many of them gloriously-pigmented butterflies.1 It was Bates who first realized that tasty butterflies which resembled unpalatable butterflies had a better shot at survival than butterflies that didn’t possess that mimicry.2 He, like Darwin and Wallace, was an incredibly astute and dedicated observer.

When Vilis joined me for breakfast at 7 a.m., rain was still pouring down beyond Richard’s pebbled and louvered windows. Perhaps inspired by Bates, I afterward slipped on flip-flops, a baseball cap, and a light jacket over my shorts and top. Vilis looked at me like he thought I was nuts and declined to join me outdoors. I knew I would get soaked, but I didn’t care. I just wanted to see what was out there.

In the yard, 2 or 3 centimetres of water covered patches of low-lying, hard, brown soil and seemingly dead plants. I splashed through warm puddles and felt warm rain trickle down my skin. In the park at the end of Richard’s street, low-lying vegetation near a creek was flooded, and flood waters poured over one branch of a paved path. I chose the other branch and discovered eucalypts with pale trunks and rusty, peeling bark, unknown trees with bark like pale green skin wrinkled at the joints, and slim, dark-trunked trees possessing branches tufted with drooping clumps of needle-like leaves.

Magpie-larks, which I recognized from a two-week vacation in New South Wales during our New Zealand sabbatical, attempted to preen soggy black and white feathers into some semblance of order while resting in a young tree. Petite, delicate doves did the same, their untidy plumages spiked into tufts. A flock of ducks with elegantly long necks, pale rusty bodies, and striking, yellowish plumes of upswept feathers on their sides jolted into motion at my approach, first hurrying across the path and then lifting into the air.

Trees astounded me, one with pale lemon flowers decorating its high canopy, another with blossoms like orange flames and long, dark seed pods hanging from gnarled limbs. Palms cluttered back yards with arcing fronds and fan-shaped leaves.

There was so much to see and hear – a slim, brown snake coiled at the edge of the path, mynas and tiny finches pecking among the grasses, white ibises and a cattle egret, the latter showing the golden blush of breeding in its plumage. And there were frogs – hundreds of frogs croaking and singing a frog opera of anuran ecstasy at the return of the rain.

I was drenched. I was also the only human being out in the rain in that park. Quickly, I slopped back to Richard’s house, changed clothes, and headed back to the park with my binoculars and bird guide. The doves I didn’t recognize were diamond doves; the ducks, plumed whistling ducks; the tiny finches, zebra finches. I felt I could sing an opera, too.

In late morning, with the rain abated, Vilis and I drove to Warrina Mall to check out Townsville’s ice arena, since we brought our skates to Australia with the thought that they would provide us with a refreshing antidote to the Queensland summer heat. The rink’s surface, however, was only a third the size of that in our Nova Scotian village of  Tatamagouche. The lighting was dim and gloomy and the ice was rough and rutted, its surface chopped into a layer of loose, grimy-looking snow. This venue bore no resemblance whatsoever to the Alpine Ice Sports Centre in Christchurch, where my sons and I skated during our time in New Zealand. That arena was brightly lit, with its beautifully-groomed ice providing one of the city’s big attractions for teenagers – Friday night public skating accompanied by a disc jockey, loud music, and flashing, multi-coloured lights. Based on the Christchurch experience, Vilis and I thought it worthwhile to bring our skates to Townsville. After seeing the rink, we scratched that idea, neither of us willing to put our skates on that ice, especially not at $15 a pop for public skating.

Australia, we were discovering, is an expensive place to live. In the Coles grocery store at a shopping centre, the prices of many items, particularly fruits and vegetables, seemed exorbitantly high. Australia produces bananas, but I had bought organically-grown bananas in Tatamagouche – thousands of kilometres from the nearest banana-growing regions – for a lower per-kilogram price than I could buy non-organically-grown bananas in Townsville. And our dollars were nearly on par. Baked goods, as well, were astonishingly costly. Hold your hearts – in a bakery, a single filled donut cost $3.80. Australia has no Tim Horton’s. 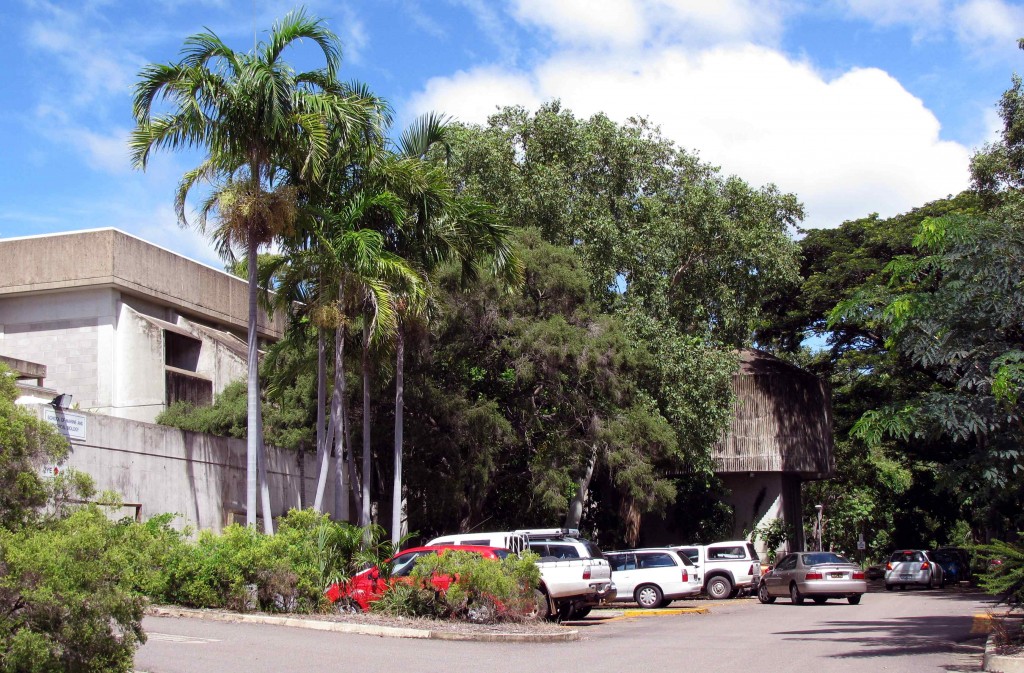 Although Vilis suspected that few staff, if any, would be working at James Cook University on this New Year’s Eve, we drove to JCU to have a look at the campus where Vilis will be based during his sabbatical. Established as an independent university 30 years ago, following a decade of operating under the umbrella of the University of Queensland, JCU sprawls over 386 hectares3 of parkland and savannah bumping up against the steep slopes of Mount Stuart in Townsville’s south end. Named for James Cook, the famous British explorer who made three voyages to the South Pacific in the late 1760’s and early 1770’s, the university officially opened its doors on April 20, 1970, two hundred years to the day after Cook first sighted Australia’s east coast.3 Considered a top-level institution for tropical research, the university has campuses in Townsville and Cairns in northern Queensland, as well as in Singapore, plus it operates smaller study centres in other Queensland locations.3 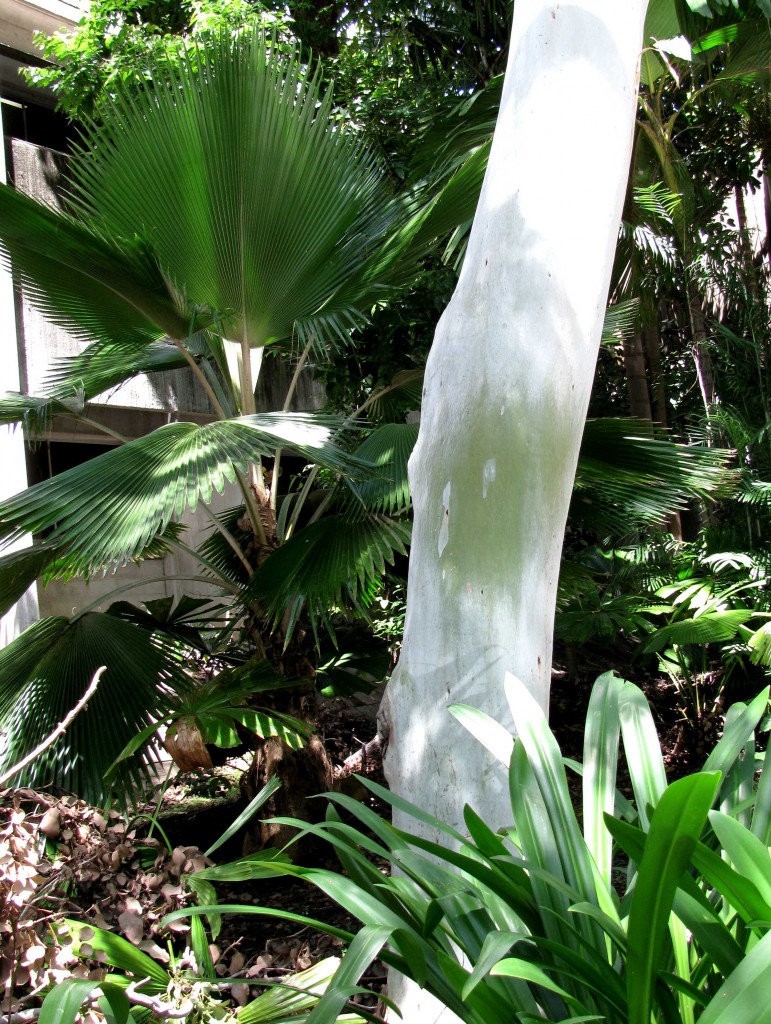 The modern, concrete buildings of the Townsville campus struck me as being nondescript, if not downright ugly, but were saved by lush plantings of tropical vegetation that softened their utilitarian ambience and provided beauty. A young fan-leaved palm outside the School of Marine and Tropical Biology, in which Vilis will have his office, mesmerized me with almost circular, pleated fronds that dipped and waved gracefully in the breeze, as if each were a dancer in a musical theatre that required no words and had for music only the soft whispers of the wind.

We strolled briefly in the grounds near the biology building and spotted black-feathered Australian brush-turkeys meandering beneath the trees, their tails flattened sideways, their bare heads and necks conspicuously red. A half dozen striking, tall, grey-and-white birds I didn’t know strode on long legs into cover, their upper bodies held almost stiffly. Rainbow lorikeets – small parrots flamboyantly feathered in green, blue, yellow, and orange – fed on nectar high in a spreading tree, their raucous squawkings resembling a boisterous family squabbling over lunch. In Australia, we may have to compose careful grocery lists, but the birds – and what birds! – are free for the looking.

During the early evening on this New Year’s Eve, Vilis and I looked through today’s issue of the Townsville Bulletin. One story reported that more than a third of the people who responded to a survey planned to spend $100 on alcohol for New Year’s Eve celebrations, and almost three-quarters of the survey’s respondents hoped to celebrate 2010’s arrival by having sex, even if in a one-night stand, which nearly half those surveyed stated they had previously engaged in on New Year’s Eve. Some were so desperate, they’d slept with a friend.4

Simply struggling to stay awake after supper, I read, paced the living room floor, and paged through my bird guide, telling myself, “Just one more hour.” Having slept longer than I did, Vilis appeared unfazed by jetlag and calmly continued with his mathematical simulations. Again, by dusk, I crashed into bed, only to be awakened in the night by thuds and scratching noises on the roof – no doubt, the dancing possums Richard had mentioned. So, we had a dead gecko, the ants, and the possums. I wondered what would be next.