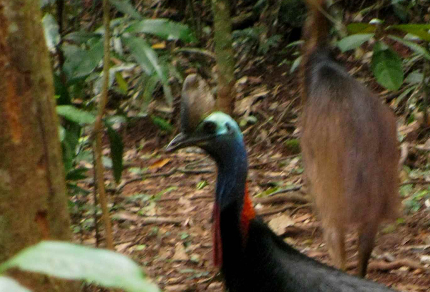 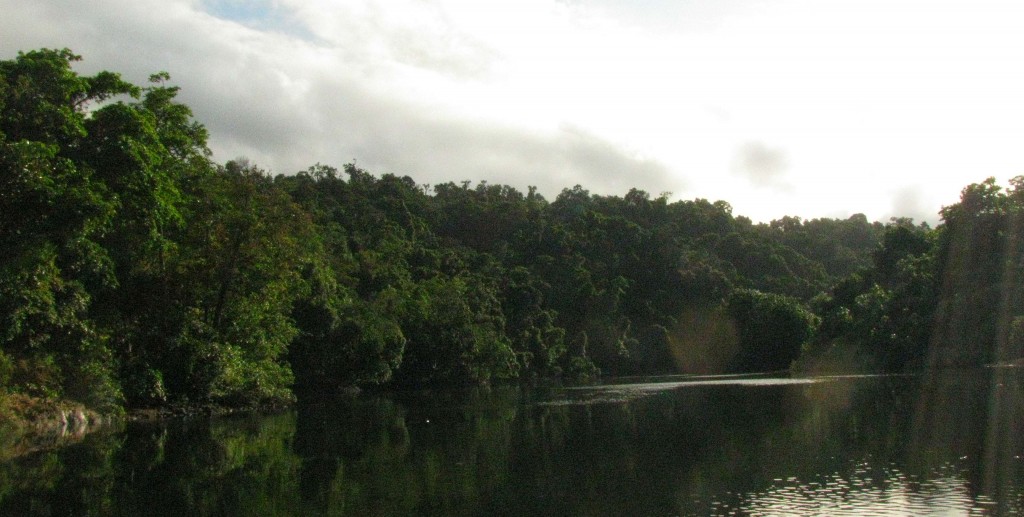 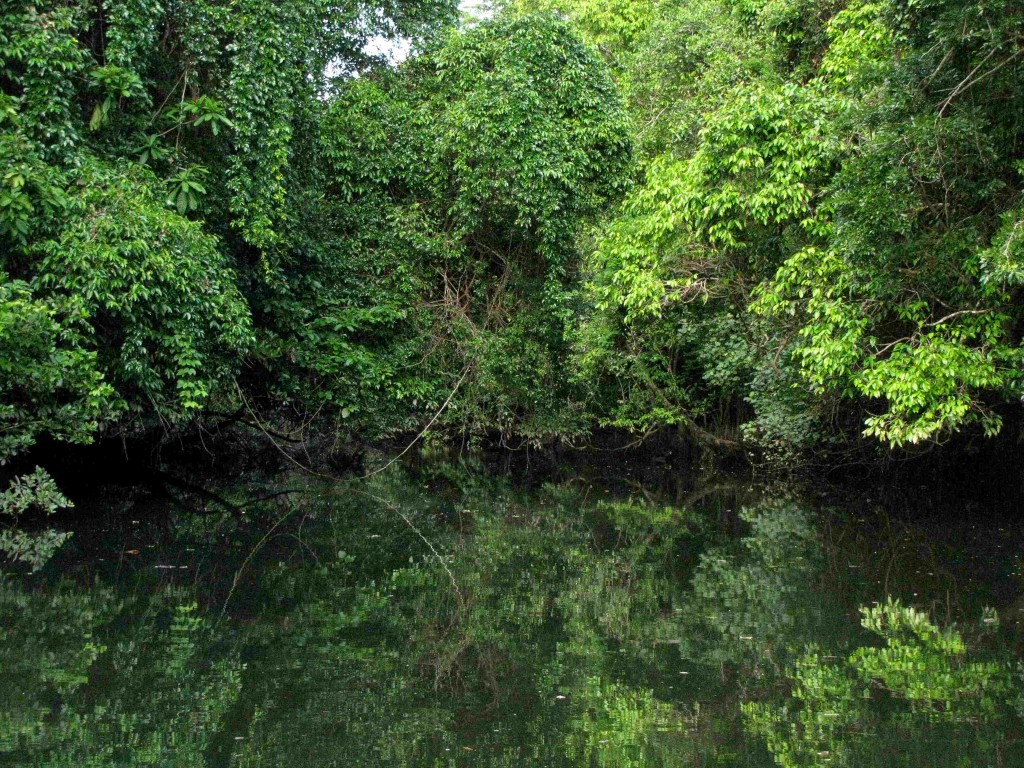 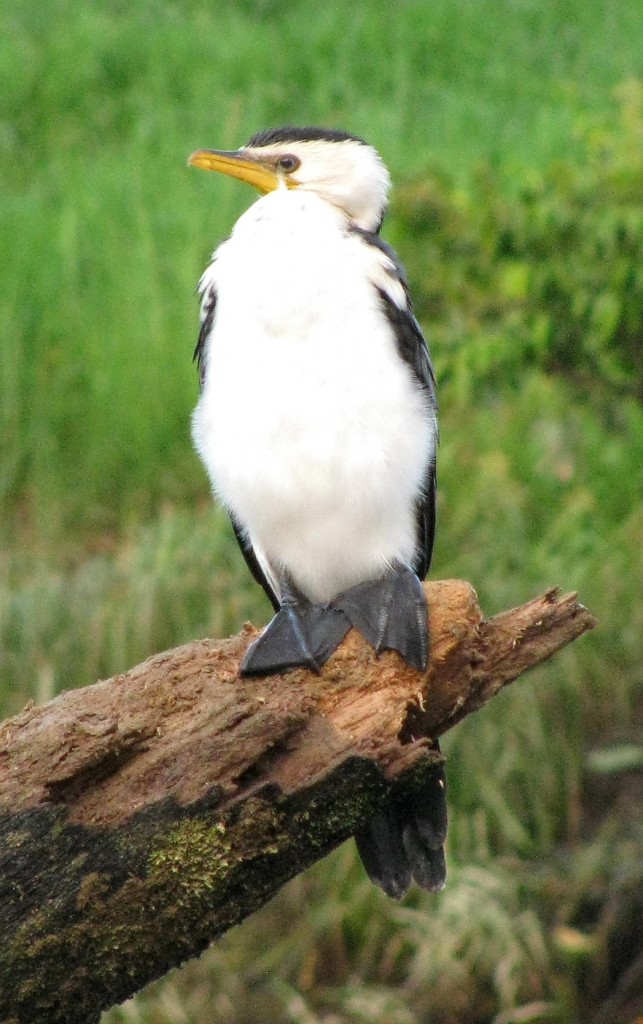 At 5:30 a.m., with the tropical dawn chorus in full swing, Vilis and I crawled out of our sleeping bags, enticed by the two-hour cruise of the Daintree River awaiting us. A pheasant coucal added its voice to the those of the songbirds we’d identified in Daintree Village last evening, and I spotted white-rumped swiftlets hovering high over the river.

At 6:30 a.m., we, along with eight other binoculars-toting guests, joined Chris Dalhberg, our river guide, and his assistant Murray and friend Phil, both of whom acted as spotters. A light breeze rippled the river surface, but eased into stillness, creating spectacular reflections. A little pied cormorant perched on a tree stump in the river appeared completely unfazed by our presence only a few metres away, and welcome swallows checked us out, some perching on the bow of the roofless metal boat. 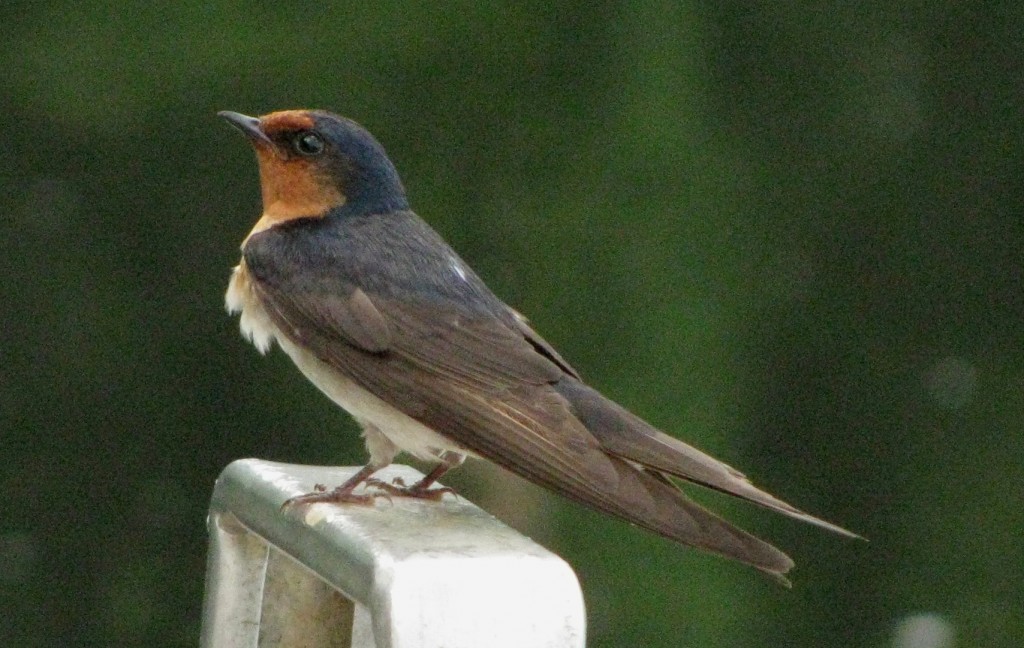 Sightings of birds came fast and frequent, with a black bittern flying over us and then perching in clear view on a shoreline shrub branch, a Nankeen night heron skulking among mangrove branches, a pair of great cormorants resting in a treetop, and yellow orioles singing out loudly, their voices matching that of the mystery bird I heard last evening. Shining flycatchers – the male glossy black; the female chestnut and white with a black cap – flitted among mangrove branches, and we observed two males incubating eggs in pendulous, cup-shaped nests. A forest kingfisher flashed brilliant blue and white as it flew through sunlight, and at two different sites, Papuan frogmouths incubating eggs observed us motionlessly, their eyes mere slits. 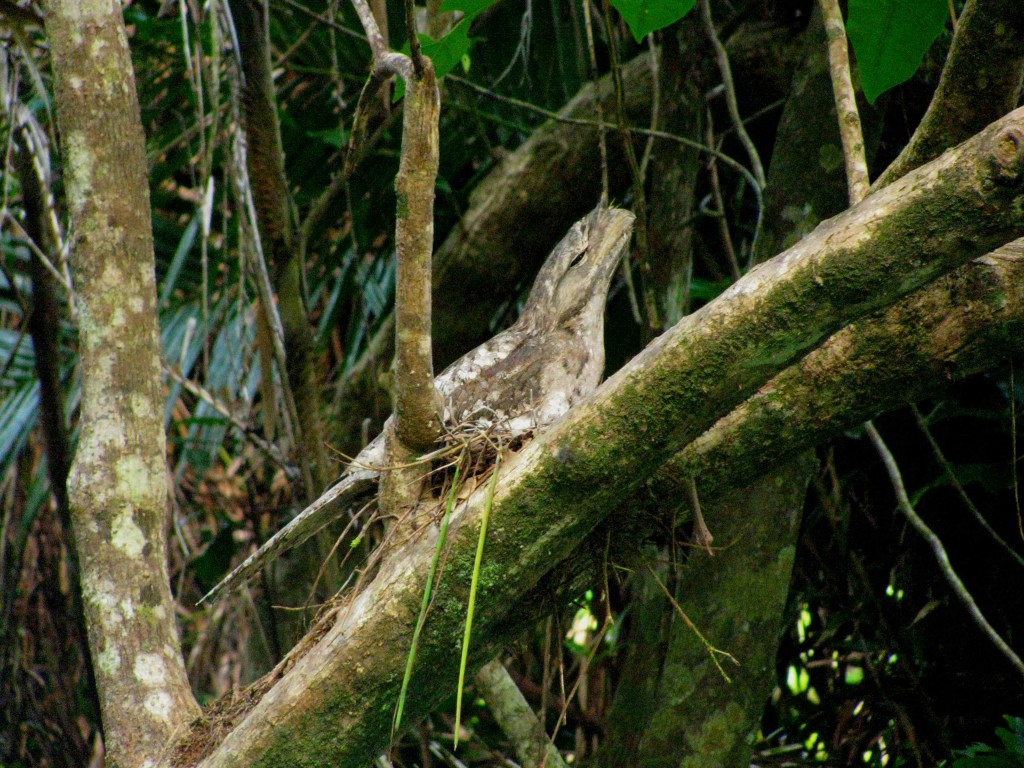 “Crocodile on the left!” Murray called, and Vilis and I thrilled at our first sighting of a wild saltwater crocodile, visible only as back plates and a golden-eyed head rapidly sinking beneath the water surface. Later, we observed another croc that allowed the boat to approach closer before it too submerged into the safety of the murky river. Both were statistically females, Chris told us, explaining that the ratio of female to male crocs is twenty to one. Watching the stealthy, silent movements of those crocodiles made me appreciate in a whole new way the crocodile warning signs I’ve encountered adjacent to North Queensland coastal waters. 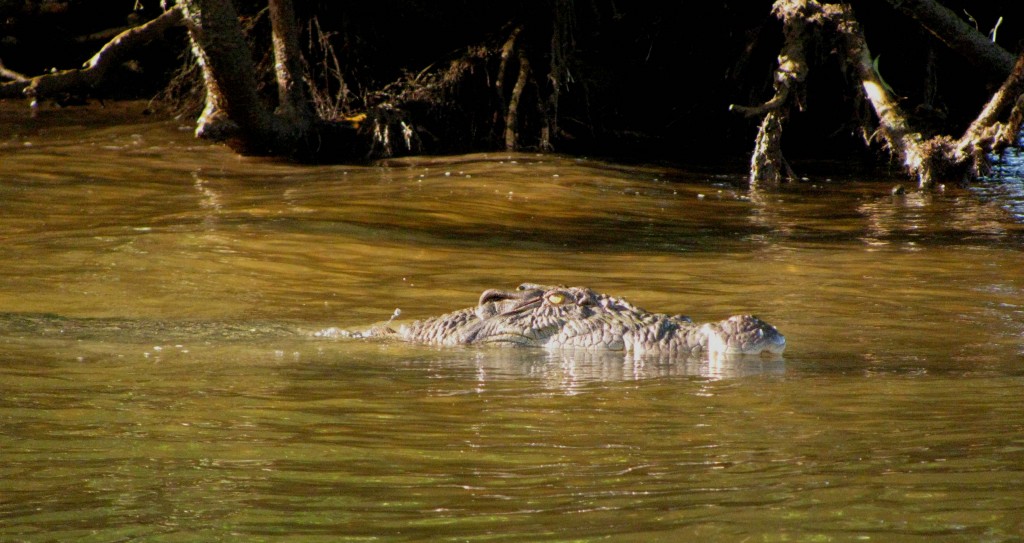 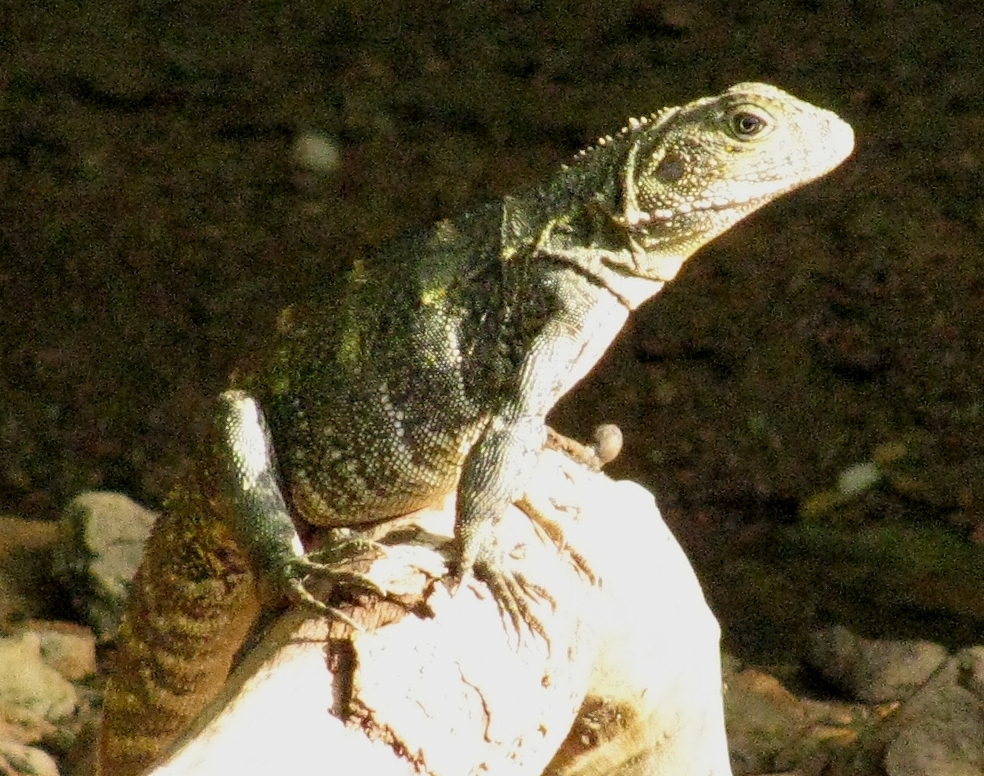 The time passed too quickly, Chris as excited as any of us at finding such a bounty of wildlife. A water dragon basked on a slim log at the mouth of a small creek. A Pacific baza or crested hawk perched in a riverside tree and stared down at us out of brilliant yellow eyes. Tiny double-eyed fig parrots bulleted over the river. Perhaps the most satisfying sighting of the morning was that of a little kingfisher that flew in among mangrove branches and casually studied us while we exclaimed over its diminutive, cobalt and white beauty. 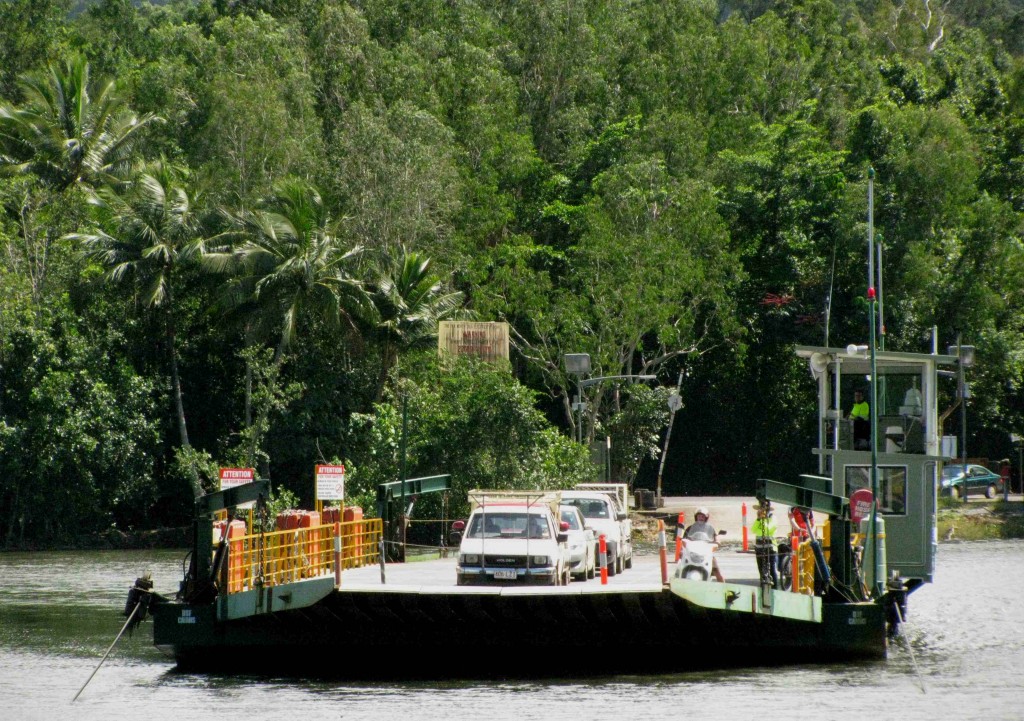 Exhilarated by the river cruise, Vilis and I broke camp, caught the Daintree River ferry in mid-morning, and drove north through pockets of privately-owned land interspersed with the dense rainforest reaches of Daintree National Park. The highway was amazing; it curved and twisted like a snake doing the hoola-hoop and formed a tunnel overhung by palms, tree ferns, and trees weeping thick streams of trailing vines. We drove slowly, soaking up the deep, dark forest surrounding us, and paused at the Daintree Alexandra Range Lookout to gaze over the forest and coastal plain to the broad mouth of the Daintree River and Coral Sea. 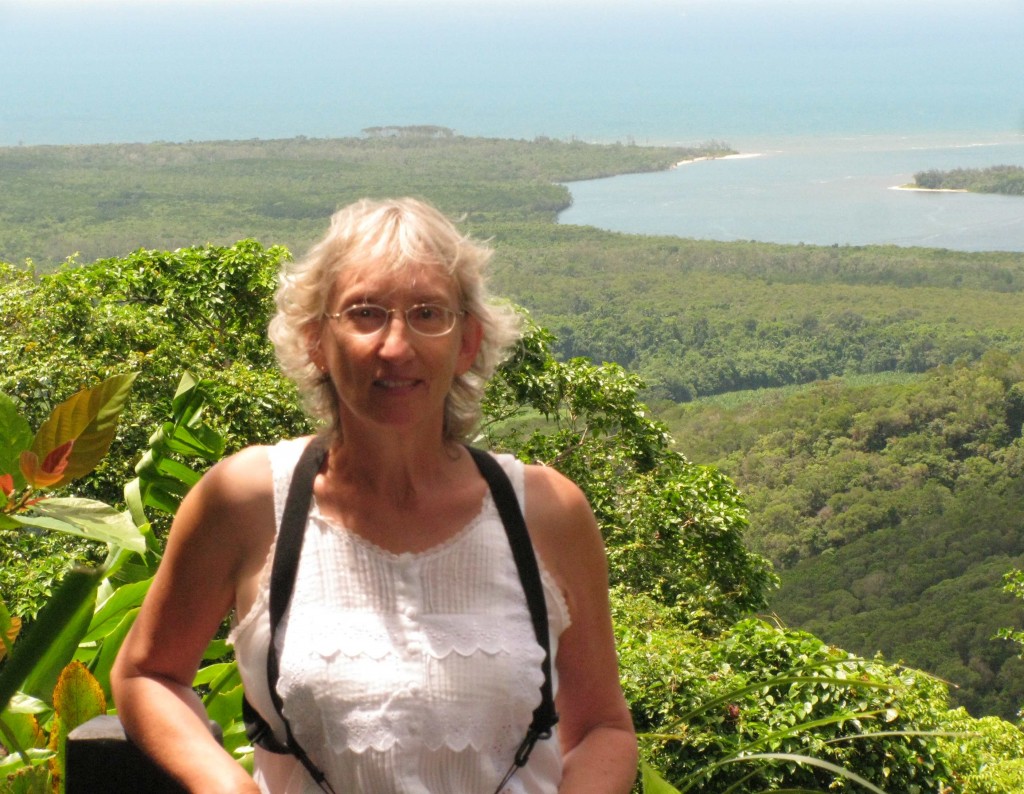 Here I am at Daintree Alexandra Range Lookout, with view of Daintree River and Coral Sea in background (© Vilis Nams) 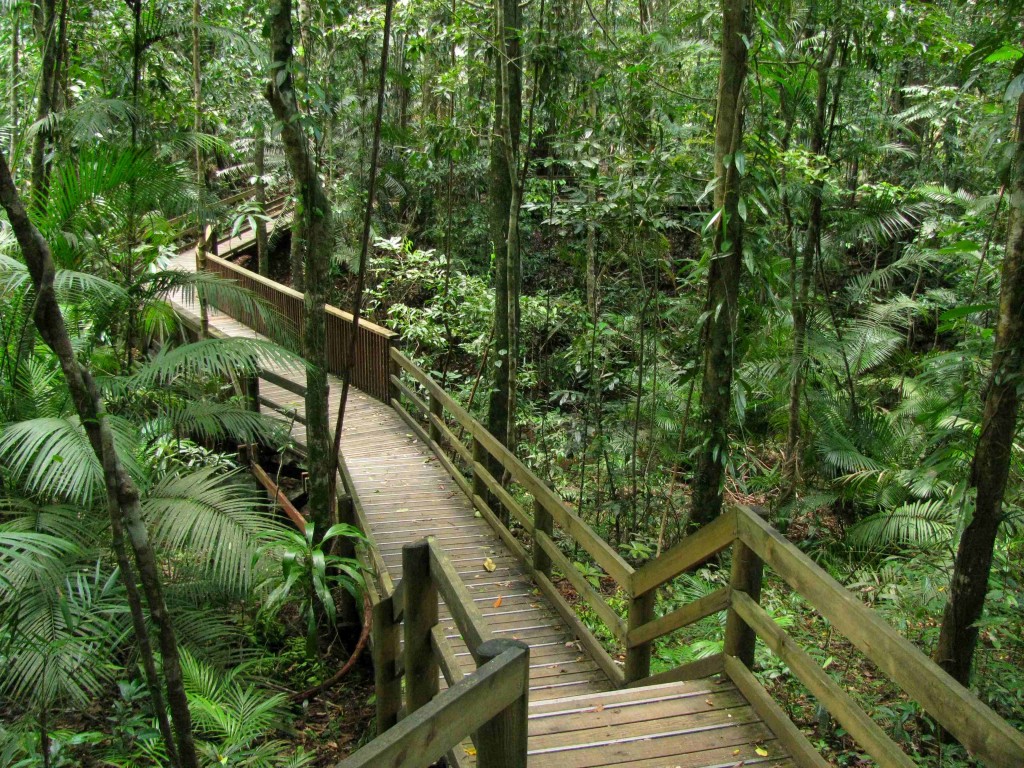 Then we drove on through the forest to Jindalba Boardwalk, a 700-metre, well-maintained boardwalk through tall, dense rainforest comprised of towering overstory trees, a sub-canopy of palms that included Alexandra and Licuala palms, and an understory of king ferns and ground palms. I thought I spotted the massive, cylindrical boles of bull kauri within the forest, along with strangler figs and other rainforest species. Humidity clamped down over us as we strolled the boardwalk and then hiked a steep, rough 3.5-kilometre trail described as ‘for adventurous bushwalkers only.’ With a surface that varied between loose stones and greasy mud, the trail led us up a steep slope and across a creek, before heading downslope. We spotted a huge nest mound, which was likely that of an orange-footed scrubfowl, and to add one more spectacular wildlife sighting to a day already overflowing with sightings, came across two southern cassowaries strolling along the trail ahead of us, one an adult; the other a brown-plumaged immature. 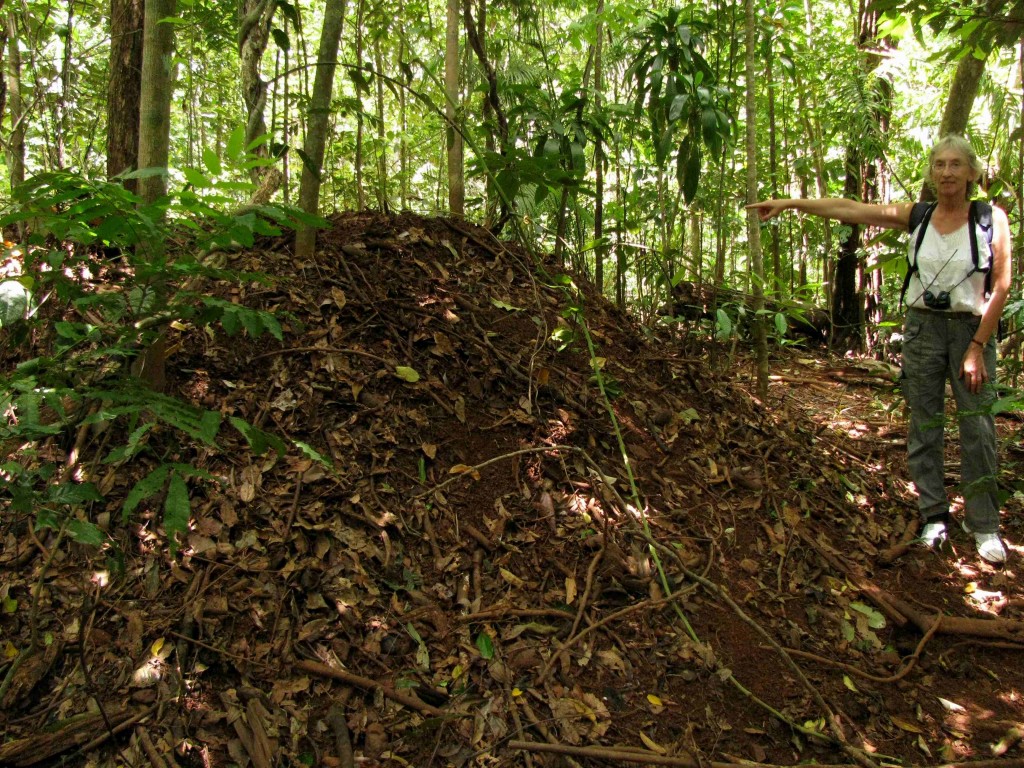 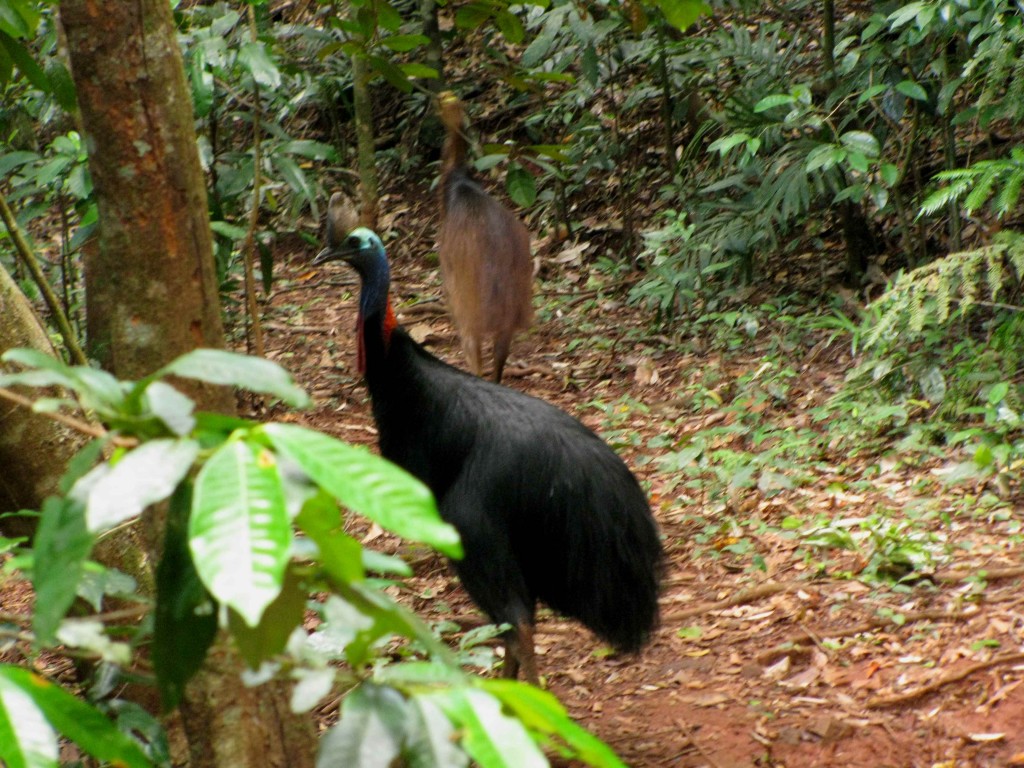 On becoming aware of us, the cassowaries simply strolled into the forest, showing no alarm. I recalled reading a description of cassowaries that described them as being ‘confident’ birds. For dingo/wild dog trappers in the tropical northeast of Queensland, as Vilis was told by a James Cook University Ph.D. student studying dingoes, cassowaries are potential and dreaded accidental captives capable of disembowelling anyone attempting to release them.

Thick, dim, and speared by massive trees, the Daintree rainforest, the most ancient on earth, provided an incredibly rich and diverse backdrop for the striking variety of vertebrate life we had observed within the space of only a few hours, from the river and from the bushwalk. Invertebrate life abounded as well, with butterflies flitting among the trees at forest edges and cicadas producing waves of sound that swelled through the forest. 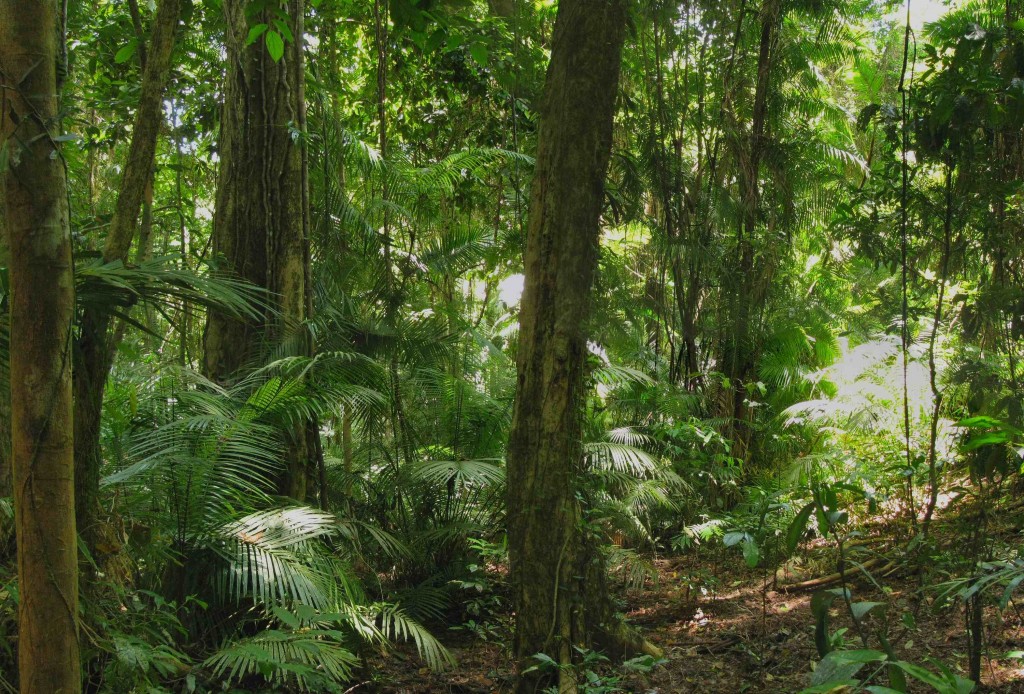 Replete with today’s discoveries, our cup spilling over, we retraced our path south toward Cairns, pausing briefly at Wonga to walk the sandy beach edged with rainforest. As we returned to our car, Vilis spotted a Boyd’s forest dragon on the forest floor, which scurried up onto a tree trunk and froze into stillness. It was, I thought, one more gift from the Daintree. 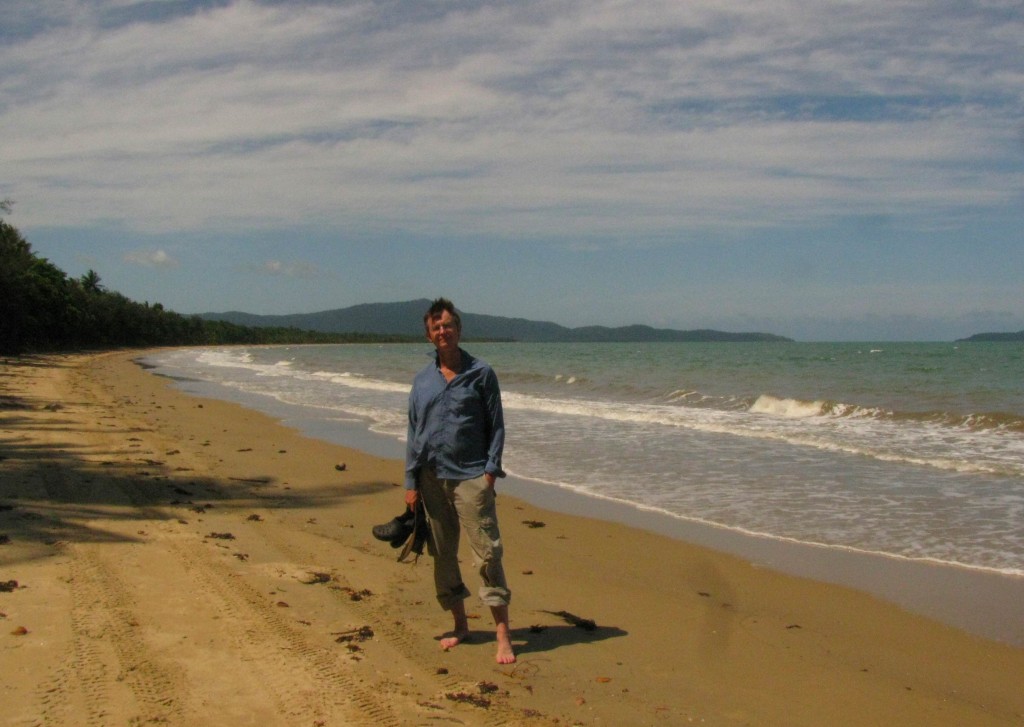