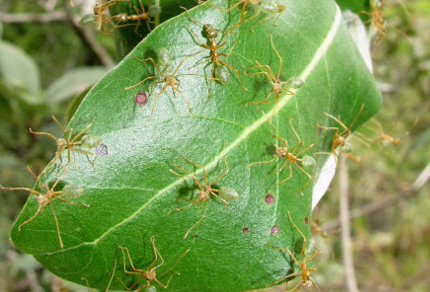 At 5:30 a.m., while I sat on the toilet, a 15-centimetre-long pale green gecko clung to a vertical wall beyond the open door of the loo. The soft-skinned reptile’s toes were splayed wide, its tail a lazy curve pulled by gravity. Prompted into motion by some cue not obvious to me, it interspersed brief reptilian dashes with moments of frozen stillness until it reached a perpendicular wall, along which it sprinted toward the loo until I lost sight of it behind the shielding door frame. Seconds passed. From my seat on the toilet, I scanned the door frame and walls beyond, eventually spotting a slim curve of gecko head and bulging gecko eye peering at me around the door frame, like a voyeur. So, the cue was me. What did a gecko see in a naked woman on a toilet? Again, seconds passed. Then the peering eye and partial head disappeared, and an instant later, the gecko raced back along the adjoining wall, scooted around a hallway door frame, and retreated from my sight.

A half-hour later, I jogged to the Ross River Parkway, the morning air close and hot around me. Along the parkway, mynas in flight mobbed a slim brown raptor, and whistling ducks lifted steeply into the air, their voices shrill, as though panicked. Tanned, muscular Australians ran and cycled past me, and others less obviously fit walked their dogs. Easing into exertion in this climate, I alternated a minute of running with four minutes of walking, yet by the third interval felt my steps lagging, a headache building, my Adidas sports top stuck to me, and sweat trickling down my face and soaking my hair. In the still, sultry air, it was as though I was moving through a sauna.

After breakfast, a downpour eased the humidity, and during its drenching shower, Vilis and I heard on national radio that “Australia is a nation of suburbs.”  Vilis remarked, “That doesn’t sound very appealing,”and I envisioned urban tentacles spreading and spreading until this country’s entire coastline – along which all major cities and most of the nation’s population are located – became a continuous adjoining of Aitkenvales and Railway Estates and Mundingburras. That was definitely not an appealing vision.

The sudden rain gave way to torrid heat relieved only by light breezes. While Vilis test-drove the used Kias and Holden he’d found yesterday, I washed laundry in Richard’s washer, which was situated outdoors under the house, and then hung the cleaned clothes on a revolving clothesline in the yard. A little paranoid about spiders, I cautiously picked clothes pins from a plastic container on an outdoor shelf and, recalling Millie’s warning, kept an eye out for green tree ants while I hung clothes.

In Australia, you don’t put your hands anywhere where you can’t see exactly what’s around them, because not only is this country home to a multitude of poisonous snakes, it’s also home to venomous spiders and biting ants that can really deal out the pain. Some of the spiders are as dangerous as the snakes. The 12-centimetre, hairy Sydney funnel-web spider packs a dose of venom that, until an antivenom was developed in 1981, proved fatal to humans.1 Fortunately, this arachnophobe’s nightmare doesn’t live as far north as Townsville, but other venomous spiders do. These include the red-back (Aussie cousin of the black widow) and white-tail, as well as the still toxic but less dangerous mouse spider and wolf spider.2 So, I hung clothes carefully, and even though I worked quickly, my bare shoulders felt like they’d been placed too close to a fire.

In late afternoon, Vilis and I drove to Belgian Gardens, a suburb on the western flank of Castle Hill, to meet Chris Johnson, the ecologist with whom Vilis will collaborate during his sabbatical, and his family. Chris, grizzled and intense, recently published a book about Australian mammal extinctions and is the head researcher for the dingo project with which Vilis will be associated. His wife Robyn, slim, greying, and empathetic, asked how we were doing at Richard’s and commiserated with us about the heat and humidity and my struggles to overcome jetlag. We met Chris and Robyn’s younger son, Lachlan, who will move to Brisbane in February to pursue a career as a cellist, and their daughter Philippa, who will enter high school in late January. 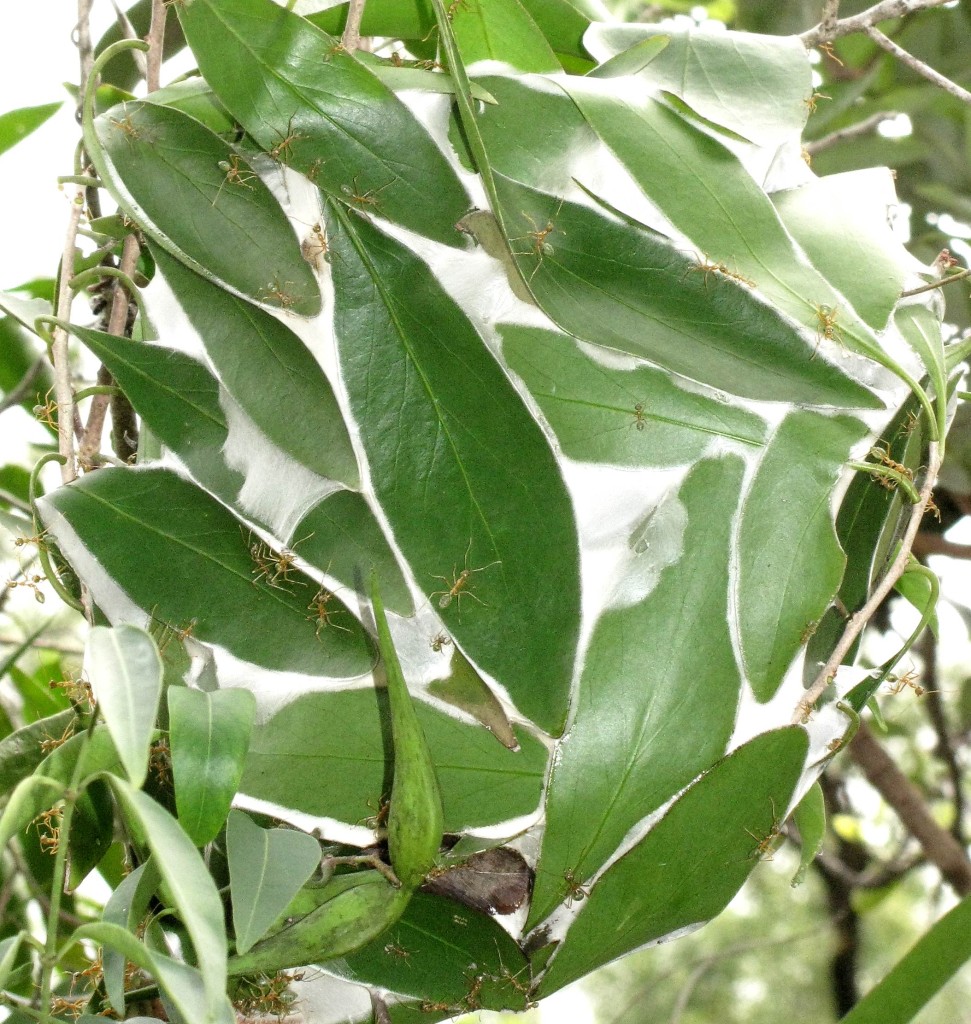 The Johnsons’ home was open and airy, perched on the lower slope of Castle Hill, and with two walls of dining room windows looking out into treetops. Proudly, Robyn informed us that they can climb to the top of Castle Hill from their back yard, and that an echidna, one of Australia’s two species of egg-laying mammals (the other is the platypus), lives in her garden. Chris mentioned that they have flying foxes which feed in the trees outside the big dining room windows at night, and explained that the construction of the leaf nests made by green tree ants is an incredibly complex procedure involving long lines of ants working together to tug and roll the edges of leaves, and of ant larvae being passed up and down ladders of living ants, the silk that the larvae produce being used as a glue to fasten the rolled leaves together. “You can even eat the ants,” he added. “Like many Asian ants, they have a little honey pot.” He pointed out some of the ants crawling along a living room window sill. I looked closely at the ants and saw that, sure enough, they had a plump, pale green swelling at the rear end of their bodies. “Some people even make a drink from them,” Chris added.

Our hour and a half conversation jumped from intriguing local wildlife – including mention of great bowerbird bowers, which Chris promised to show me at the James Cook University campus tomorrow, to hotspots to visit – Paluma, Magnetic Island, the Atherton Tablelands, to dangers we must be careful to avoid. “It’s against the law to have water laying around,” Robyn informed us. “Because of the mosquitoes. We have the dengue and the Ross River fever. And you know you don’t swim. You just don’t do it. If you get stung, you’re in ICU or dead. And the scarring is terrible.”

“The box jellyfish cause cardiac arrest,” Chris elaborated. “But the irukandji, they’re really small. They sting you all over and the pain is supposed to be just incredible.” Robyn enlarged, “And they do something to the skin, too. Damage it.”

“Are there crocodiles?” I asked, and received the response that saltwater crocs have turned up on The Strand, causing the waterfront park to be shut down, and that at least one freshwater crocodile lives in the Ross River. The latter, Chris reassured me, wouldn’t be a problem on my daily outings along the river because freshwater crocodiles are much smaller than their saltwater cousins and eat fish and other aquatic life. Then he He added in his gentle voice, “Saltwater crocodiles hunt big mammalian prey – pigs, cattle, kangaroos, people.” The last prey item was mentioned almost apologetically.

As we walked out to the Camry, Chris plucked a half-dozen passion fruits from a lush vine tumbling over his front-yard fence and bagged them up for us. At the last minute, Robyn invited us to see the lotus lilies she had growing in pots in her backyard, so we all hurried up through the house to the yard to view the tall, broad-leaved water plants that emerged from two large pots. Unfortunately, they had finished flowering. “So, these plants are illegal,” Vilis teased Robyn. “The pots have water in them.” She shook her head. “No, they’re not, because I have fish in the water to eat the mosquito larvae.” “Do they grow locally?” I asked, and was told the lotuses can be found growing in the Ross River.  It would seem that Townsville dishes up one tropical beauty after another.