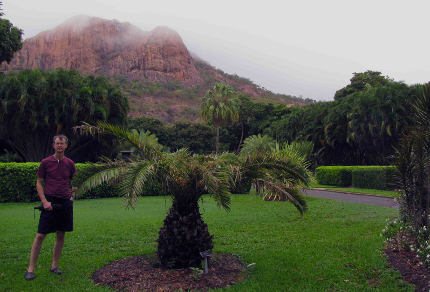 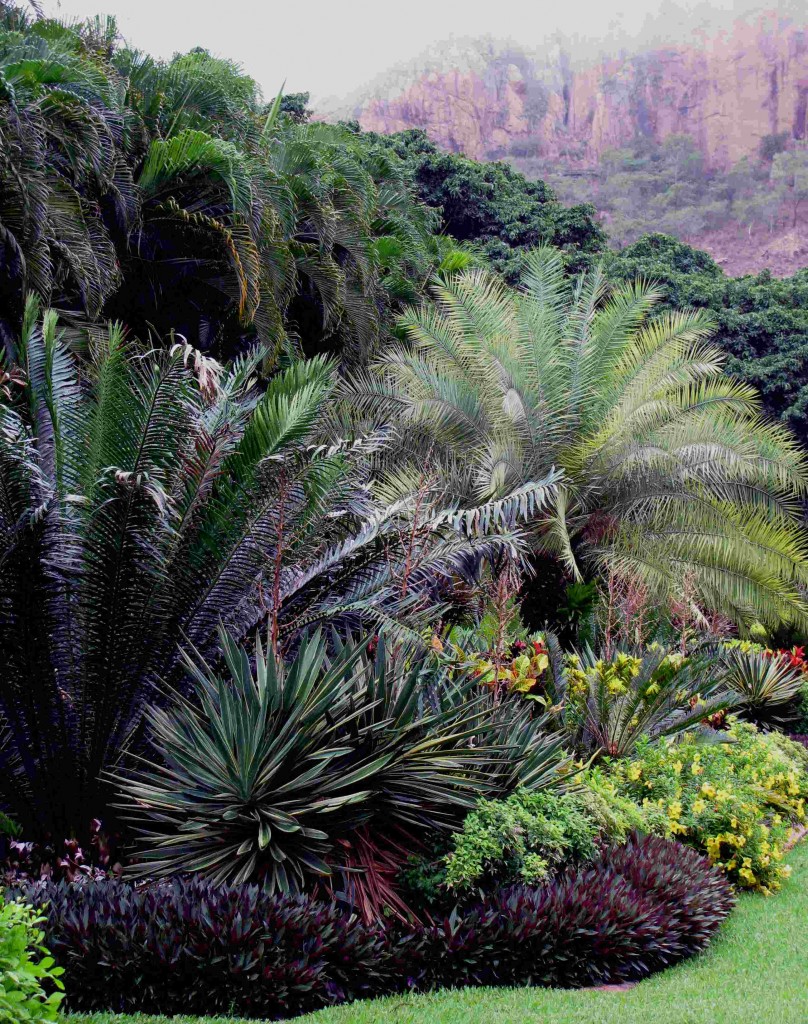 In steady rain, Vilis and I drove to Townsville’s Queens Gardens in early morning, the peak of Castle Hill shrouded in cloud above us. Entering the gardens at Gregory Street, we passed a coconut fallen onto the sidewalk pavement. Now, to many of the world’s residents, a coconut fallen to the ground and laying at one’s feet might not make much of an impression, but to a pair of Canadians who left their home in mid-winter, this coconut, with its fibrous, outer covering, was like an exotic portal to all the mysteries of the tropics.

On the rainforest trail within the Gardens, slender-boled palms soared into the sky, their trunks snared by philodendrons that formed tangled nets of vines around them. A milky pine reared up beside the trail, its thick trunk grey and pebbled, its boughs spreading wide overhead. Ferns perched on the thick, angled boughs of a rain tree, and a white fig, with its boughs buttressed by hanging roots, spread its expansive canopy over a astonishing breadth of more than 30 metres. The fig’s boughs, of which there were about 30, flung themselves outward like the muscular, reaching tentacles of a vast sea creature.

Beneath these rainforest giants, tree-ferns tossed out verdant, arched fronds, cycads flaunted flaring, pinnate leaves, and a Vanuatu fan-leaved palm extended its broad, pleated leaves at eye-catching angles. An understory of broad-leaved herbaceous plants with leaves of astounding size could have come right out of the tropical chapter in my book of house plants. Bromeliads formed waist-high thickets, while golden pothos and other plants whose leaves I recognized, but whose names escaped me, spread in dense ground covers. Vilis spotted an orange-footed scrubfowl scratching in the leaf litter with strong, clawed feet, its dark plumage blending in with shadows beneath a stand of ferns as it snatched up a worm and gulped it down. 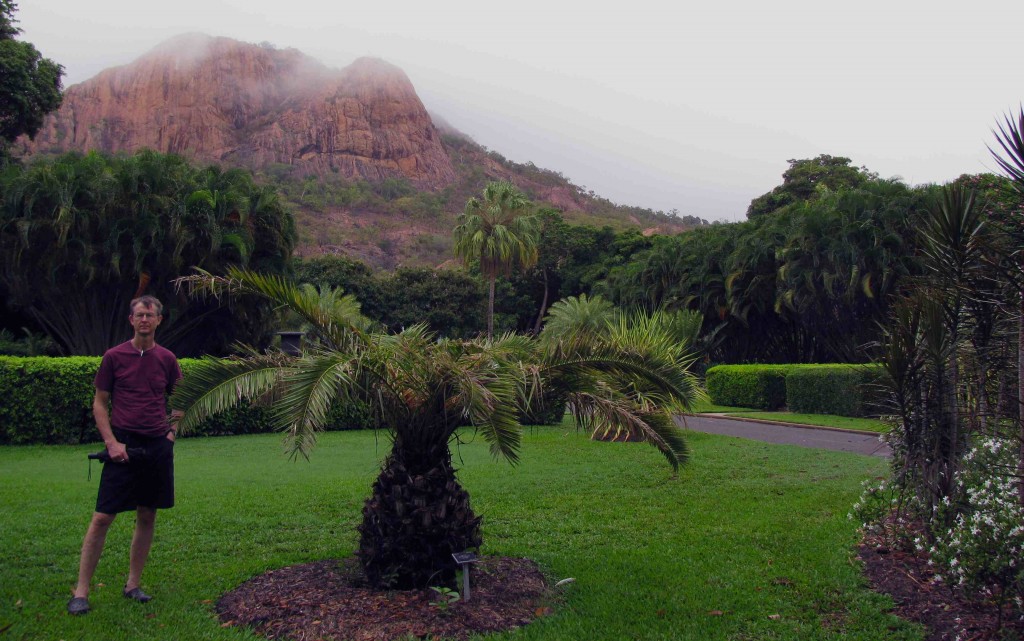 Leaving the rainforest trail, we skirted the palm lawn, where a half dozen coconut palms were flanked by yellow-and-red-leaved crotons twice as tall as I am. Rainbow lorikeets fussed in the open, spacious canopy of a stately weeping fig, and the branches of a dark-barked rain tree edging the lawn splayed outward as far as some species of mature trees are tall.

I discovered that the scarlet-flowering trees so popular for back yards in Townsville are poincianas, originally from Madagascar. In addition, I was introduced to the hoop pine, with its straight, thick  bole and small-leaved, coniferous twigs, and to the tropical African tamarind having the divided leaves of the Fabaceae family as well as a thick, fissured trunk and spreading, crooked limbs. The stars of these gardens were undoubtedly its massive trees, beside which the ordered display of succulents, the aviary, and the rose garden, with its yellowed leaves and wilted flowers, paled in comparison.

As we strolled the rainforest path again before leaving the gardens, Vilis murmured, “The memories of that horrible month before we left are starting to fade.” That time of preparation, to which were added numerous trips to doctors and physiotherapists because of a work-place hand injury Vilis had suffered, had definitely been stressful, but I hadn’t known my husband thought it horrible. The two of us just kept on going, focused on the light at the end of the tunnel – Australia.

Later, during early evening, humid, dusky warmth enfolded me as I strolled the riverside trail near Richard’s.  A stench accompanying the retreat of standing water pervaded the air, and flocks of brown and black mynas (originally an African species), fed on the park lawns like early-spring flocks of robins in Nova Scotia. Perched on an overhead wire, a half-dozen rainbow bee-eaters gleamed like satin in vivid shades of green and blue, their long, deep-blue tail-shafts extending well beyond the base of their tails. Last evening, I caught a glimpse of what I thought was a small bird in flight dragging two sticks. On clearly seeing the bee-eaters, I realized it was one of them.

Back in Canada, when I was asked by friends and acquaintances what I would do while Vilis pursued his sabbatical research, which at this point in time is aimed at analyzing movement patterns of dingoes, I replied, “Lots of writing, lots of birding, and lots of hiking.” The first of these, I have commenced, and the second undertaken with glorious success to date. The third, with both Vilis and I coping with healing joint injuries, may be a tougher go.

On my return to the house, Vilis and I discovered that Australia’s living art is not confined to rainbow bee-eaters. Geckos darted across the exteriors of Richard’s windows, hunting insects. The small, nocturnal lizards’ pale bellies and splayed toes were pressed against panels of clear or green pebbled glass. Each of the gecko’s toe pads fastened to the glass looked like a rounded suction cup. Those geckos clinging to clear glass panels appeared as creamy shapes, while those on the green glass appeared almost to glow a rather shocking emerald colour. All were slightly warped by the pebbled glass surface. Together, they presented an impromptu and ephemeral art installation. Geckos on Pebbled Glass, I called it. 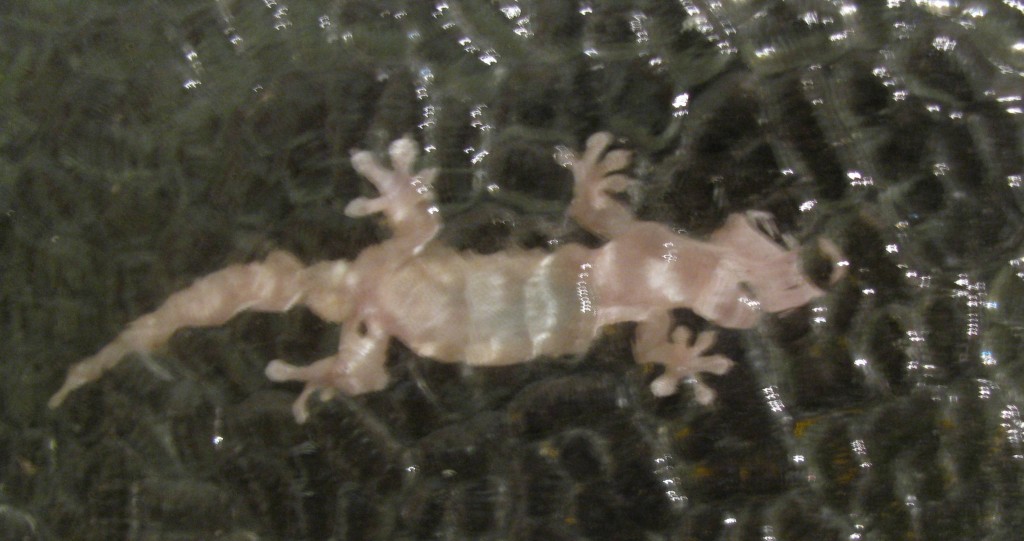