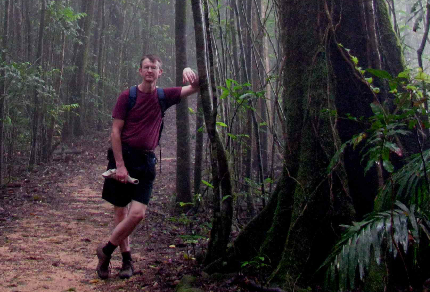 By 9:15 a.m., Vilis and I were on our way to the highland village of Paluma and its rainforest 65 kilometres north of Townsville and 22 kilometres inland. Highway A1, the Bruce Highway, carried us northwestward, its palm-lined median a sweep of elegance beside us. Water lay in low spots beside the road, and in the distance, dark-trunked and white-trunked trees were scattered across bulging, granite hills and looked like thin hair on a rolling, rocky skyline to the south.

The highway itself, which soon narrowed to two-way traffic, was bordered by flat land covered with grasses and sparse woodland – part of the savannah growing on the coastal plain. I spotted an Australian pelican floating on a large pool of water near the road, and a road-killed kangaroo or wallaby on the pavement’s shoulder, its identity revealed by its huge hind feet. A billboard  warned: Are YOU cyclone ready? Another cautioned DON’T SLEEP AND DRIVE, a message frequently repeated as we traveled  northwest.

Blackened trees and grasses indicated the ravages of fire that had crossed the highway in some relatively recent time past. I was struck by the fact that the trunks of smooth, white-barked trees were not blackened by the fire, but rather scorched to a rusty hue. (I later learned that the fire had been a prescribed burn to reduce the fuel available to bushfires.)

Rain showers spilled onto the windshield, and to the south, cloud-veiled hills rose in sharp peaks. Horses grazed in a pasture on the west side of the road, and Charolais cattle in one to the east. A white pipeline paralleled the road, and we wondered what it carried, then saw a connecting pipeline descending from a huge reservoir atop a craggy hill. Thus, the cargo was water.

Showers gave way to sunshine that was soon wiped from the sky by a fierce downpour, the heavy rain smearing our view of thickly-forested hills rearing up to the south. Vilis took the turn-off for Paluma Range National Park, the road leading us through savannah with a verdant grass groundcover and past fields of what we decided must be sugarcane, based on what we could recall from The Thorn Birds television movies.

At the base of the Paluma Range, the paved road narrowed and began a serpentine climb alongside boulders and cliffs and through thin-trunked montane forest. Hairpin curves with speed limits of 20 kph granted views of soaring, rain-soaked peaks. “You could get dizzy driving this,” Vilis commented, easing the Camry around a series of tight bends.

The upper reaches of the forest were veiled in fog, the trees denser and taller than at lower altitudes, their canopies arching out over the road. Needle-leaved trees were intermixed with broad-leaved species, and a roadside sign proclaimed that the next 4 kilometres were ‘cassowary country.’

In Paluma, we drove past a sign informing us that we were at the the crest of the mountain, which had an elevation of 2925 feet. The small township itself appeared to be a collection of simple homes resembling camps or cottages, plus the Gumburu Environmental Education Centre, a couple of restaurants, a tea room, and a pottery. With rain still bucketing down, we ordered the $10 fish, chips, and salad special at the Paluma Dreaming restaurant and hoped the weather would improve while we ate an early lunch.

A bird feeder baited with bread and jam at the corner of the restaurant’s covered patio attracted Lewin’s and Macleay’s honeyeaters, with each species of slender, nectar-feeding bird repeatedly chasing the other from the sweet treat. In the distance, a man wearing a broad straw hat and checked shirt hauled brush near the edge of a clearing, seemingly oblivious to the rain. Beyond the man, who looked miniscule against the rising face of the rainforest, a few yellow leaves drifted down from the canopies of trees at the forest edge. The leaves’ descent seemed lazy, almost slow-motion, and I realized it was because they had a long, long way to fall.

While Vilis and I shared a slice of rich chocolate cake topped with whipped cream, the rain ceased. Instantly, the forest burst into a cacophony of humming, buzzing, and trilling that hit us like a wave. Hurrying lest the rain return, we finished dessert and drove to the village green to park the car and explore the Paluma Rainforest Walk.

When we stepped beneath the canopy of the rainforest, we entered a different world. Mist hung among the trees. One massive tree trunk wept red bark; another’s bark appeared battered and blistered. The cylindrical boles of the overstory trees were cloaked with mosses, while parasitic plants perched on branches. Many of the trees were buttressed at their bases. From an interpretive sign, we learned that buttresses may help trees absorb moisture from the air or collect nutrient-rich debris. Ferns, thin-trunked shrubs, and viciously-thorned climbers crowded the shady forest understory. Vines entangled each other like battling snakes and coiled like green cables over the ground while others created forest swings or throttled trees within tangled nets. “If we didn’t have a trail, it would be tough to walk through this,” Vilis noted. 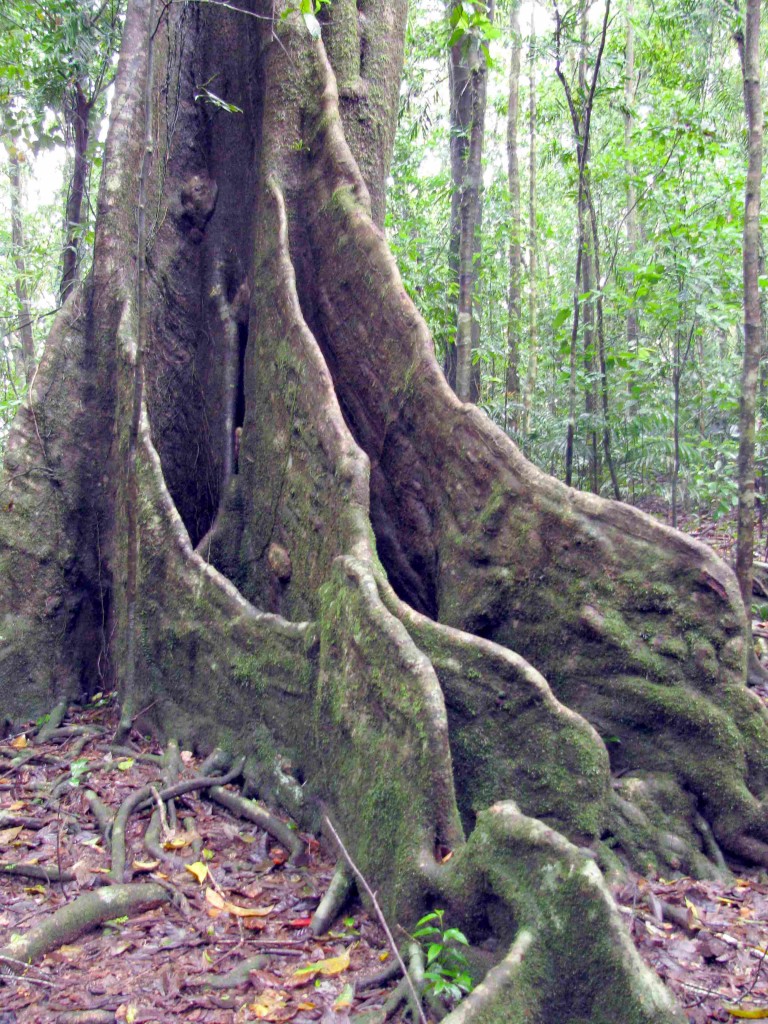 The level of sound was astonishing – hisses, buzzes, trills, croaks, and honks like a tiny bicycle horn. I saw a bird and attempted to ‘pssh-pssh’ it closer, but was completely drowned out by the forest racket. Nearby, a small bird called a gerygone flited about in shrubs and picked insects off tree trunks, but it presented only a visual picture because I couldn’t hear a sound it was making. Never before had I stood in such a noisy forest.

When we finished that track, we hiked the “H” Track, a 1.3-kilometre loop aligned with an old logging road. On it, we walked over orange soil, past trunks captured by braided vines, and through moisture-laden air hanging white in the forest. When sunlight broke through overhead, its beams poured down through the mist in long, golden shafts of angled light that touched the forest floor and threw into dark relief the rising columns of the rainforest’s arboreal giants. That picture distilled the essence of the wet tropics rainforest – heat, moisture, towering trees representing an immense reservoir of biomass, and tangled, battling understory plants fighting for nutrients and light. A striking green and blue bird with a brown and black head – a noisy pitta – scratched and pecked in forest litter beside the path, seemingly unwary. Vilis and I decided it was the species we’d seen fly over the road on our drive up the mountain.

Taking a break, we returned to the village green, where Vilis sliced into a red dragonfruit we bought at Cotter’s Market in downtown Townsville before heading to Paluma. At the market, which advertised itself as a ‘Showcase of Our Tropical Lifestyle,’ vendors had displayed chunky jewellery, acrylic paintings in brilliant shades of blue and green, original clothing designs, needlework crafts, leatherwork (including hand-made crocodile-skin belts priced at $180), baking and candies, sculptures, trinkets, and a wide variety of fresh produce. Geckos figured prominently as inspiration for jewellery and sculptures, some of the latter iridescent metal renditions of the reptiles a couple of feet long. We bought new bum bags and the red dragon fruit – an intriguing, scaly-looking green oval about 15 centimetres long that was tinged with red and was the fruit of a cactus. When Vilis sliced into it, he exposed a brilliant, raspberry pink, jelly-like flesh with tiny black seeds. Its tasted like a cross between a watermelon and kiwifruit, but with a whole added layer of earthiness.

When we returned to the rainforest, it was to the Sensory Trail, where, with our eyes closed, we slid our hands along a rope that guided us on the path, and simply listened to the forest. Vilis suspected the rope was more a guide for night walks that allowed visitors to observe phosphorescent fungi, but we enjoyed its tantalizing lead anyway. Abandoning closed eyes, I noted that the species of tree we saw earlier with the red, weeping bark was labelled as a paper-barked satinash, and that one possessing a smooth trunk with mottled bark was an ironwood. Another interpretive sign informed us that the Paluma rainforests were declared a Wet Tropics World Heritage Area in 1988, putting an end to the logging of hardwood and cabinet softwood tree species and boosting the region’s appeal as a tourist destination.

Still another sign near the road through the village provided us with a glimpse into the history of Paluma, which during World War II housed Radar Station No. 58 operated by the Royal Australian Air Force. The interpretive sign included an excerpt from the memoirs of Jean Renew, who was a female radar operator stationed at Station No. 58 and who vividly chronicled the devastating effects an extended bout of wet weather had on the station crew’s morale. In her 1988 unpublished work titled The Mountain that Moved, she wrote:

“Raining days became raining weeks, our clothes did not dry before they mildewed… The soles peeled off our shoes and we tied them on with flex wire discarded by the mechanics… [We] waded knee-deep through the mud, then had leech counting contests… Our cook went into a state of depression and our meals were now unashamedly still in the moulded shapes of the tins from whence they sprang… Two guards brewed ‘jungle juice’ from unknown ingredients, ran amok  in the jeep, using their rifles to shoot the insulators off the telegraph poles. They raced down the mountain and crashed… and had to be… lifted into an ambulance and taken away to oblivion… Uneasily we watched each other and wondered, who next?”

In mid-afternoon, with Vilis’s bum knee complaining, we called it quits and drove down the mountain. Again, we saw no cassowaries, but noisy pittas were brilliant green and cerulean flashes in flight across the narrow pavement. The tight curves of the road were exhilarating, and with a sheer drop only a few feet from my door, I felt as though I was in a light aircraft skimming above the treetops and soaring out over the plunging valleys and rugged, forested mountains. When we reached the base of the mountain, the Camry’s temperature readout informed us that the air temperature was 8° C warmer than at Paluma:  22°C at the top; 30°C at the bottom.