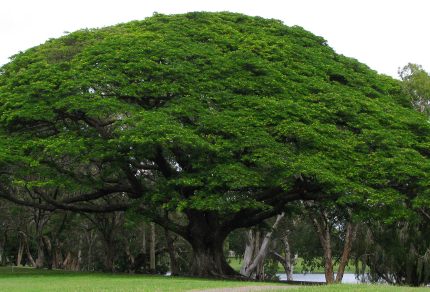 This is my week to play, to revisit old haunts, to embrace Townsville in a lingering smooch before Vilis and I head to Canberra to spend six days in the nation’s capital, and then are caught up in the whirlpool of packing and cleaning before our departure from Australia. To this end, I sought birds in Bicentennial Park at dawn, cycled to Palmetum Park after breakfast, and attended a seminar about dugongs before noon at James Cook University.

During the earliest of these excursions, the city seemed mired in still air trapped beneath a blanket of cloud, long strips of which brushed across the slopes of Castle Hill and Mount Stuart like pale smoke and almost obscured the Many Peaks Range in the distance. I slapped mosquitoes into oblivion while jotting down sightings of vividly-hued blue-faced honeyeaters, rainbow bee-eaters, and rainbow lorikeets, as well as a long list of birds less colourful but equally significant within the ecosytems adjoining the Ross River Parkway.

With the mozzies in mind, I dressed in long pants and shirt after breakfast and pedalled off past the rolling swales of the Townsville Golf Course and the dense, grassy beds of the Annandale Wetlands, so lush and verdant, fed by the brackish, tidal Ross River. Usually concerned with birds, my eyes were instead captivated by the parkway trees – chunky mangoes no longer dropping lush fruits to the ground, coconut palms bulging with fruits beneath fringed canopies, poincianas bearing flames on feathery leaves, giant white figs with private forests derived from aerial roots, rain trees with trunks entwined with variegated philodendrons and boughs adorned with pink-white pompom flowers, and gums, paperbarks, and shrubs edging the serene river flowing under brooding sky and thick air. Even before 8 a.m., and cycling leisurely, I oozed sweat from every pore. 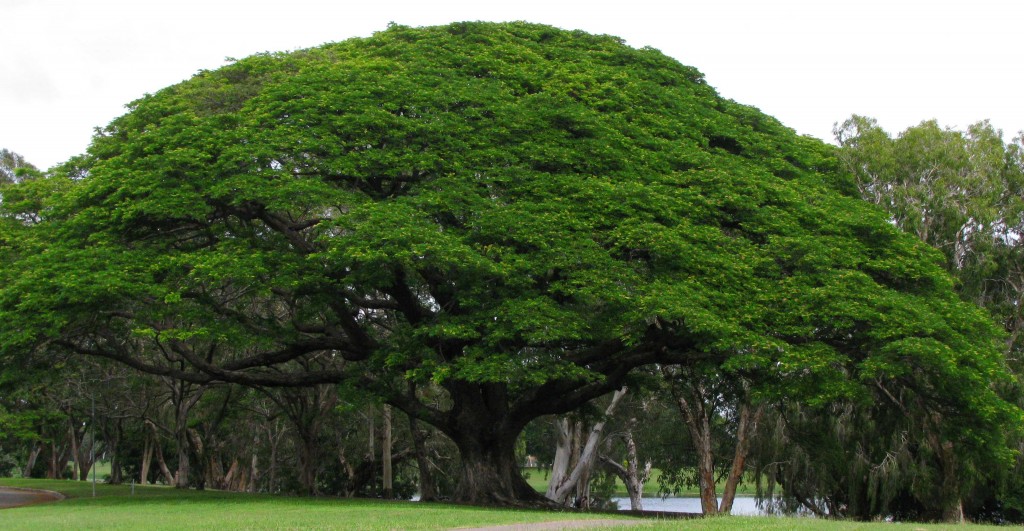 Beyond Aplin’s Weir, a quartet of stately Australian pelicans cruised slowly upstream on the river, with wings slightly raised and cupped to act as sails catching the slight breeze over the water. Thick-trunked paperbarks and gums hung branches over the water’s edge, and rain trees planted to cast shade over the parkway path rose in umbrella-crowned beauty, causing me to award them the title of most elegant and evocative shade tree ever seen by me. Near the Palmetum, wet, earthy smells hung in dense shade, cloistered within the ambience of soaring palms and rainforest trees. 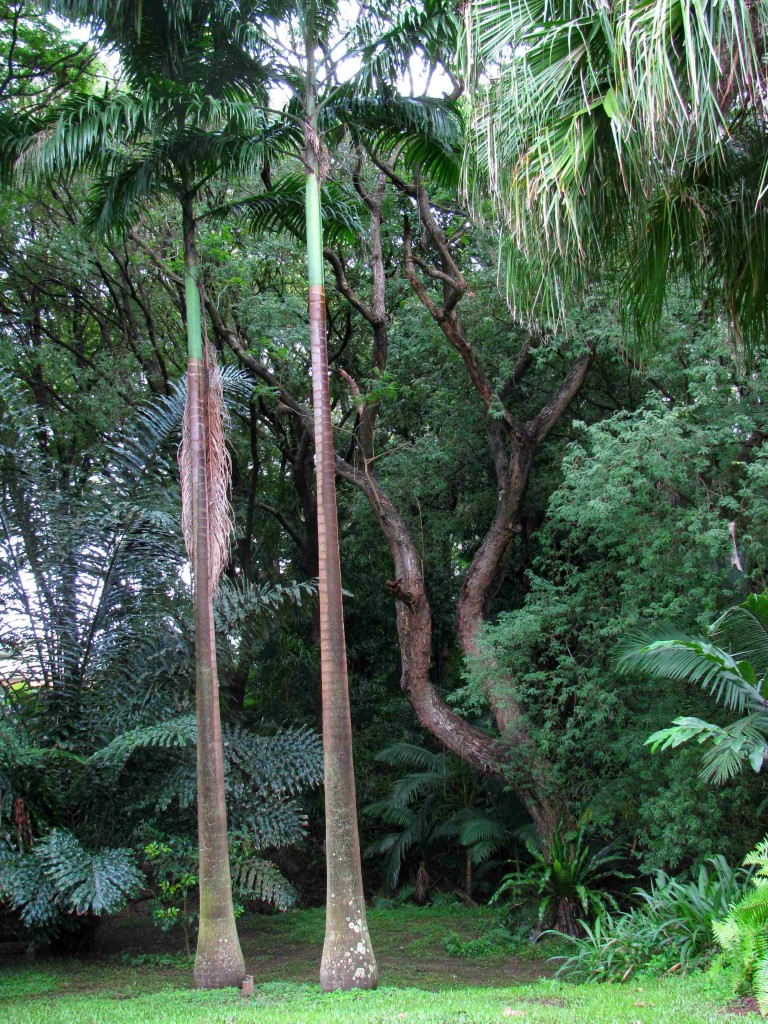 I came to the Palmetum in search of butterflies – particularly the photgraphically-elusive Ulysses swallowtail – but was snagged by the soaring boughs of rainforest trees and the profuse, curving leaves of palms, cyads, ferns, and gingers. The gingers flaunted flowers that formed red clubs, red-wine tiers, or fleshy, dangling zippers of hot pink and yellow. I did tear my eyes away from the gleaming, rain-wet plants long enough to spot unknown butterflies fluttering high in the treetops, as well as a chocolate argus feeding from a frangipani flower, an orange bush-brown resting on leaf litter, and a male varied eggfly basking upon a boulder at the edge of the tropical savannah habitat. 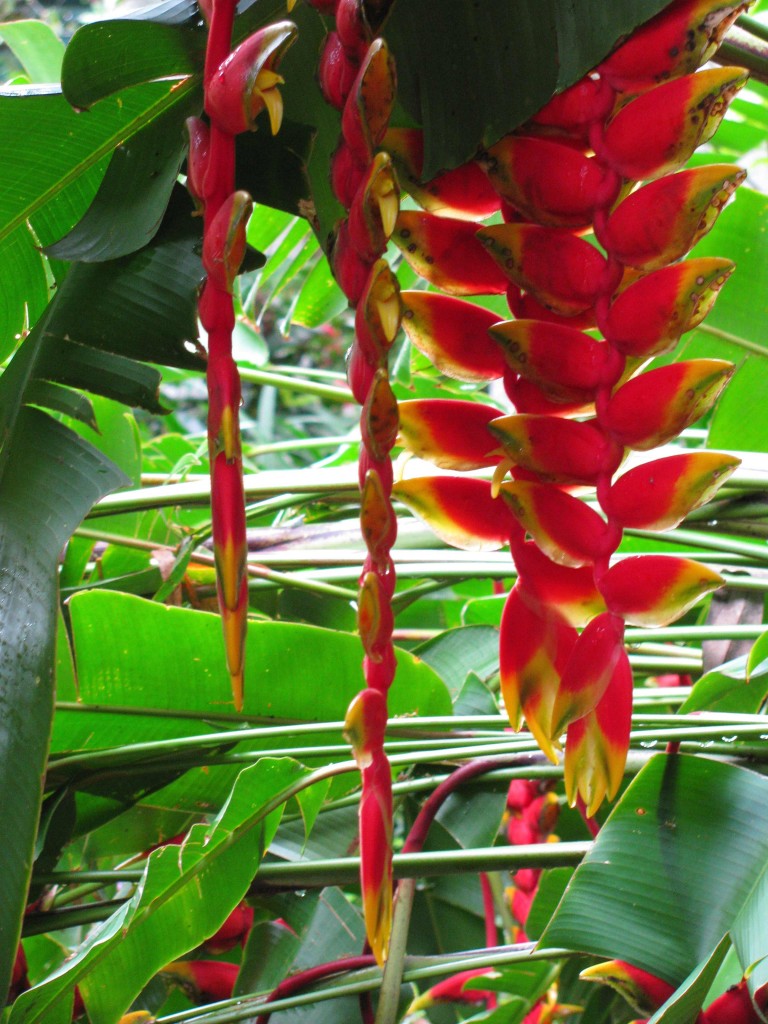 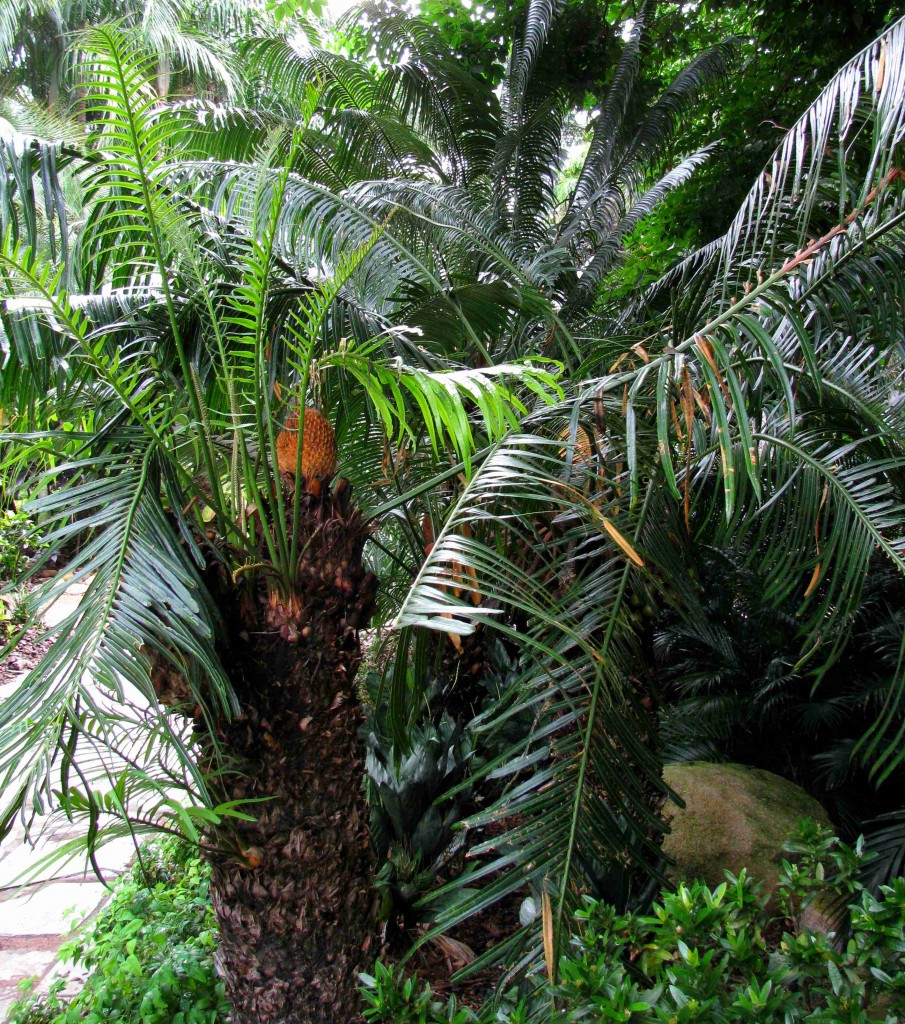 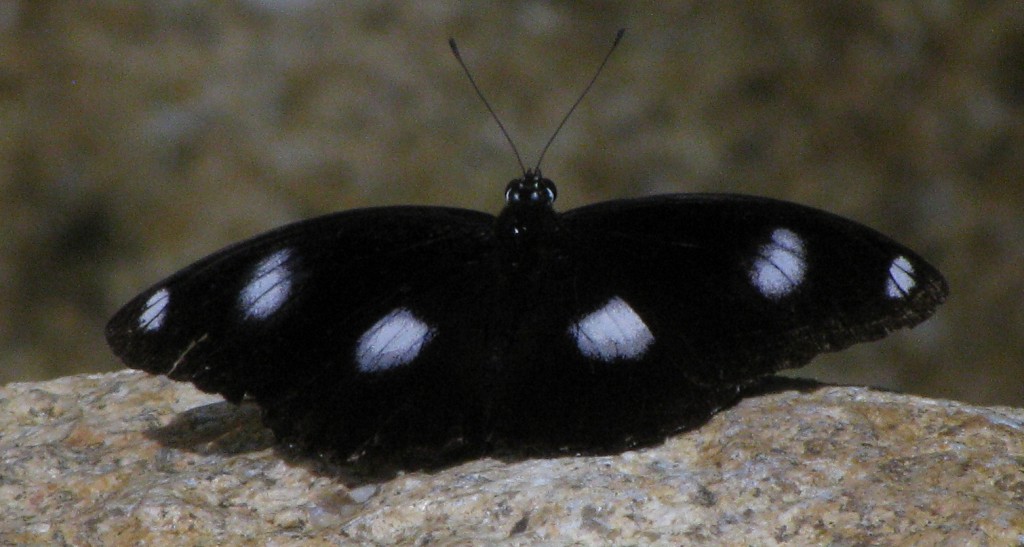 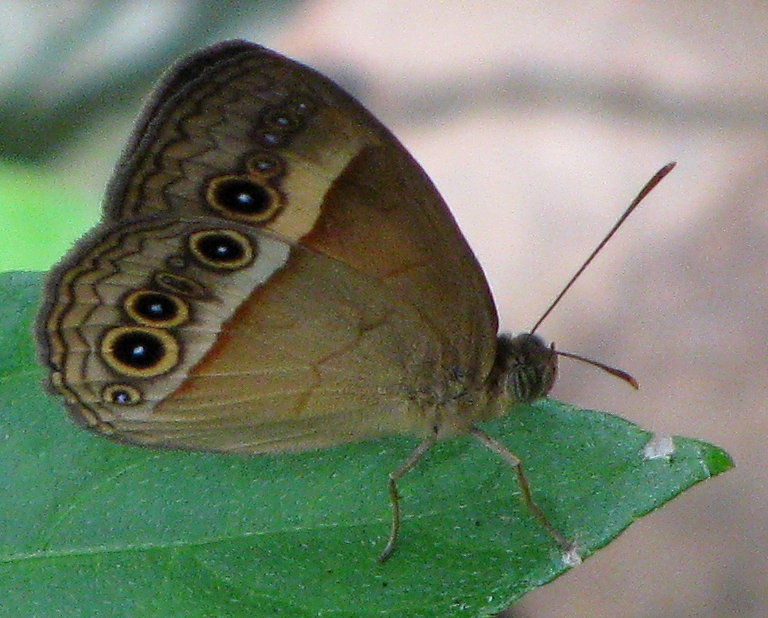 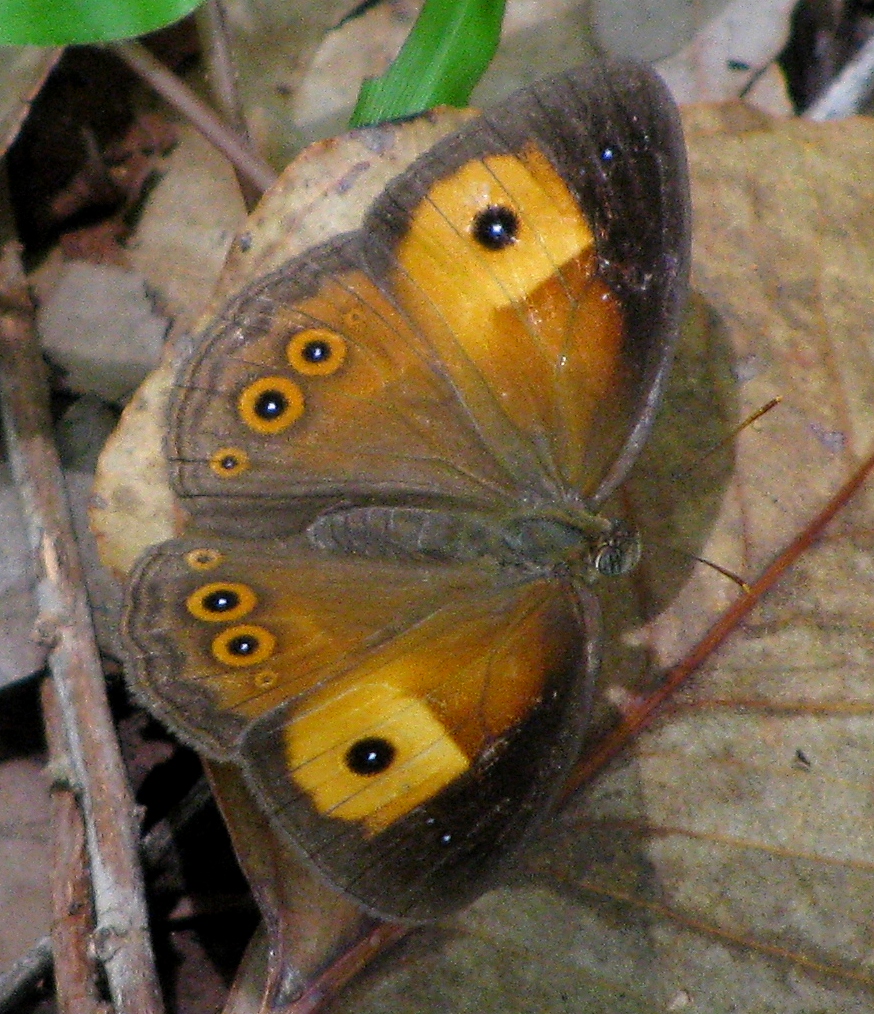 Out on the sodden, shoe-drenching grasslands of the tropical savannah, plumed whistling ducks, magpie geese, and Australian white ibises foraged for food, while a great bowerbird hissed at me from within a patch of shrubs, and a couple of juvenile barking owls chittered high, insect-like calls and stared down at me from their daytime roost in an open-canopied tree near the pond. 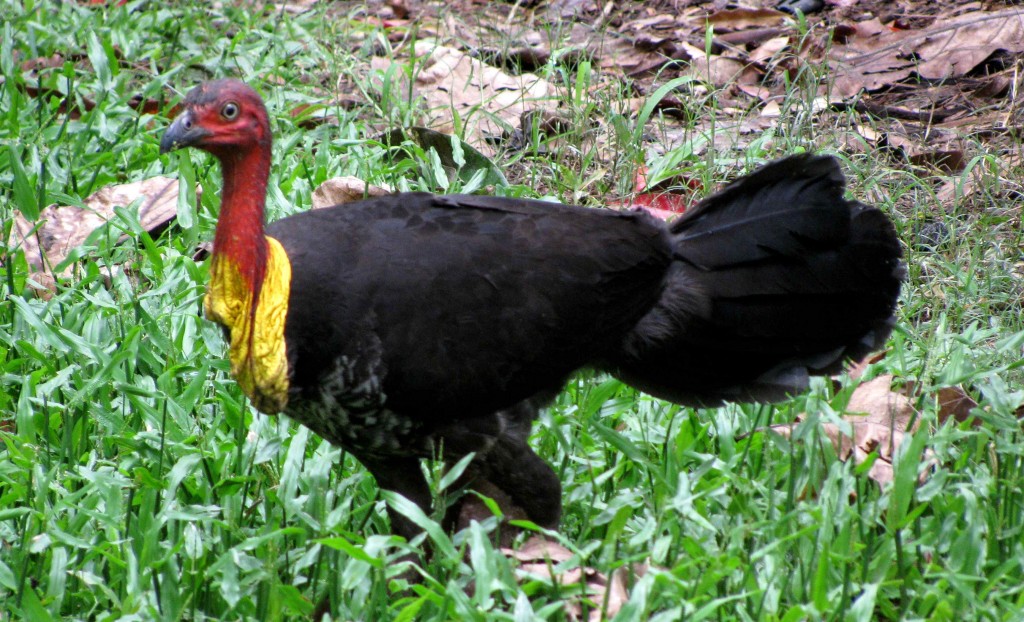 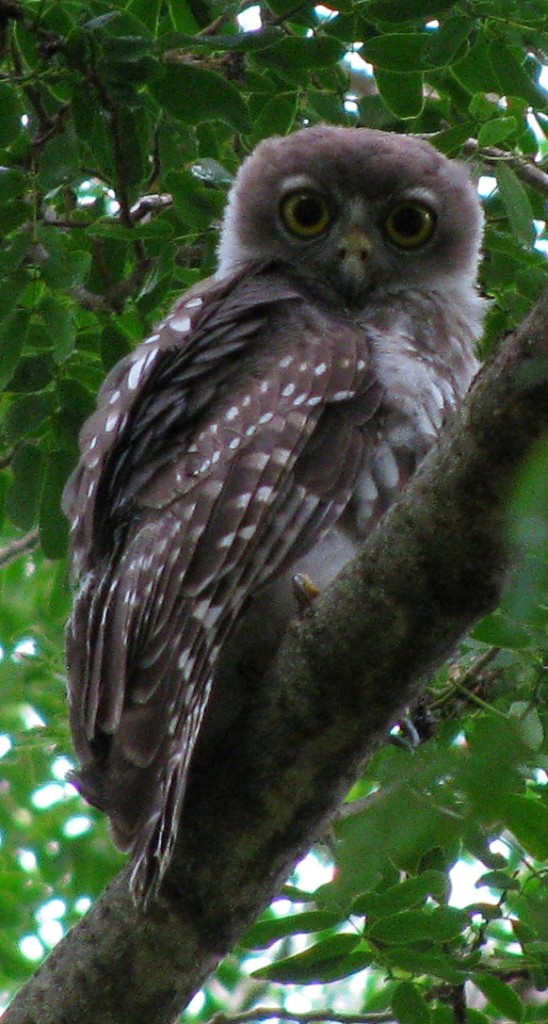 When I retraced my steps, I spotted a female yellow-bellied sunbird feeding on nectar from yellow, tiered blossoms of a shrub, an Australian brush-turkey scratching about on a lawn, and a brown-backed honeyeater repeatedly collecting strips of paperbark bark and adding them to its pendulous nest suspended from a tree branch overhanging a creek. By 9:30 a.m., the blanket of clouds had unravelled into white, cottony tufts on a background of blue. Sunshine poured through the shredded layer, adding a drowsy, thick sweetness to the atmosphere. I oozed sweat in the midst of beauty.

At 11:30 a.m., Vilis and I sat in the air-conditioned comfort of the new CSIRO building at JCU and listened as Dr. Helene Marsh began her presentation of a seminar titled ‘The challenge of conserving dugongs and manatees: issues of biodiversity, cultural diversity and food security.’ Dugongs and manatees belong to the mammalian order Sirenia, of which only four species exist today, the Stellar’s sea cow having gone extinct as a result of overhunting in the North Pacific’s Commander Islands during a period of only 28 years. The remaining sirenians are the dugong, which is a strictly marine species, the Amazonian manatee, a strictly freshwater species, and the West African and West Indian manatees, which are euryhaline species tolerating varying degrees of water salinity. The Florida manatee is a subspecies of the West Indian manatee, as is the Antillean manatee.

Dr. Marsh stated that the order Sirenia has a number of strokes against it when it comes to predictions of which animal groups will survive the biodiversity crisis and mass extinctions projected to occur in the future. The first of these is the small number of extant species, only four. Second, dugongs and manatees are long-lived and breed slowly, so they don’t replenish their populations quickly. In order for sirenian populations to maintain their numbers, it’s essential that 95% of the adults survive.

Although sirenians once occurred in large numbers, their numbers have dropped drastically. As the world’s only large mammalian aquatic herbivores, sirenians live in warm waters that support their plant food sources. This scenario results in the third stroke against sirenians, which is the fact that such warm-water habitats are easily accessible to humans whose boats may injure or kill the dugongs and manatees or who hunt them for meat and valuable by-products such as dugong oil or manatee leather (many are killed as by-catch in fishing nets). Sirenians occur in the waters of 80-90 countries around the world, most of which are developing countries with little money to implement or enforce conservation measures, and where dugongs and manatees are a readily-available and highly nutritious food source.

The Torres Strait beyond the northern tip of Australia’s Cape York is, from the evidence gathered by Dr. Marsh and her students, the sirenian hotspot of the world. Dugongs are abundant within the strait, where they feed on beds of seagrass. In this area, the dugongs have assumed tremendous importance for the cultural identity of the Torres Strait Islanders (they are the most important animal). For 4,000 years, Islanders hunted dugongs, building platforms over seagrass beds and spearing dugongs as they swam their feeding trails. Now, a tension exists between biodiversity and cultural diversity, the first leaning toward the protection of dugongs, and the second toward the inherent right of Islanders to hunt dugongs. Fortunately for the dugongs, Australia can afford to set up programs where Islanders work together with conservationists and have set in place regulations for their hunts, which remain vital to cultural identity.

In wealthy, developed countries like Australia, America, and the Arab states, the outlook for conservation of dugongs and manatees is good. In poor, developing nations, it’s not. So, the Amazonian and West African manatees may go the way of the Stellar’s sea cow, never again to fulfill their ecological niche or nourish another human.