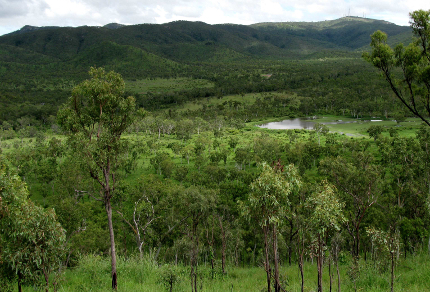 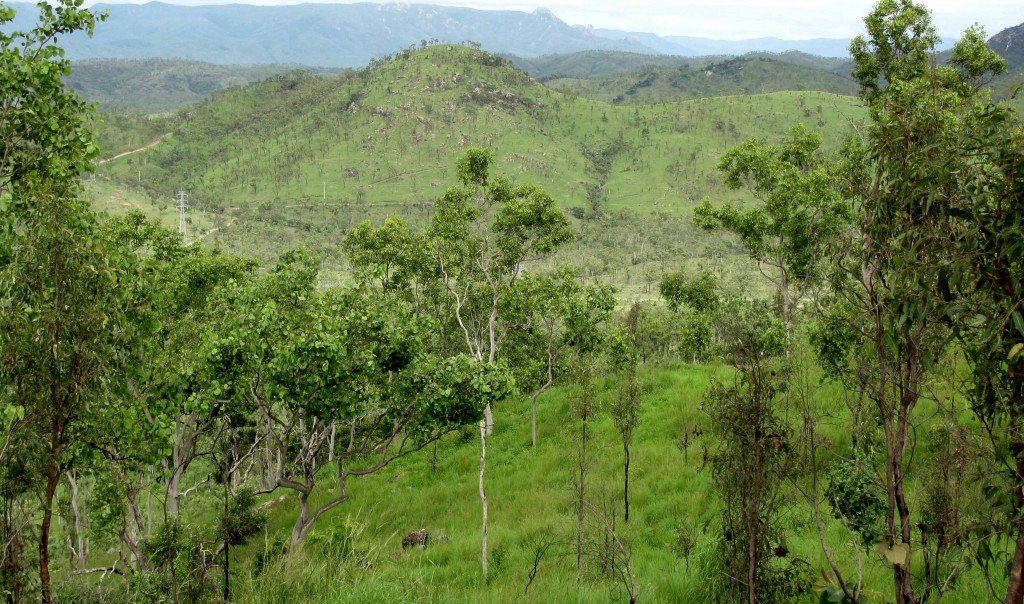 Sun and  cloud vied for airspace over Townsville as Vilis and I drove south out of the city to the rural suburb of Oak Valley and the Oak Valley Nature Reserve next to Sachs Creek. Located about 15 kilometres from the city, the reserve encompasses 75 hectares and provides habitat for critically-endangered black-throated finches.1

On our arrival at the reserve’s picnic area, we noted white-trunked poplar gums and black-trunked eucalypts, a bird-viewing shelter overlooking the creek, and evidence of recent flooding in the form of stranded logs on a gravel trail, as well as streamers of debris trailing from shrubs. We hiked along the stone-edged trail through open woodland savannah similar to that on the slopes of Mount Stuart, with the morning still, quiet, and finch-less around us. Surprisingly, or perhaps not so surprisingly in view of last week’s downpours, the ground surface on the level area near the creek was covered with a thin sheet of water, resulting in more wet shoes.

The track led us upward along the side of a rocky slope, down which water trickled over the stony soil en route to the creek. Reaching a ridge, we tramped over patches of exposed bedrock and beside rock outcrops, spotting vivid red flowers blooming among the rocks and several groups of wallabies that were startled into fleeing at our approach. One look at the wallabies’ white, thick, tapered tails set them apart from the rock wallabies we’d seen at the Ross River Dam last weekend. These new macropods, which I later identified as whiptail wallabies, were also bigger, grey rather than rusty brown, and had striking white stripes on the sides of their heads that contrasted with dark faces. When putting distance between us, they hopped with a springy, upright motion completely different from the speeding, horizontal bounds employed by the rock wallabies. Generally, they didn’t go far, stopping to observe us as curiously as we observed them. I was reminded of a herd of deer with heads up and ears and eyes searching for danger. That thought wasn’t so far off, I suppose, since here in Australia, macropods are the ecological equivalent of  North American deer. 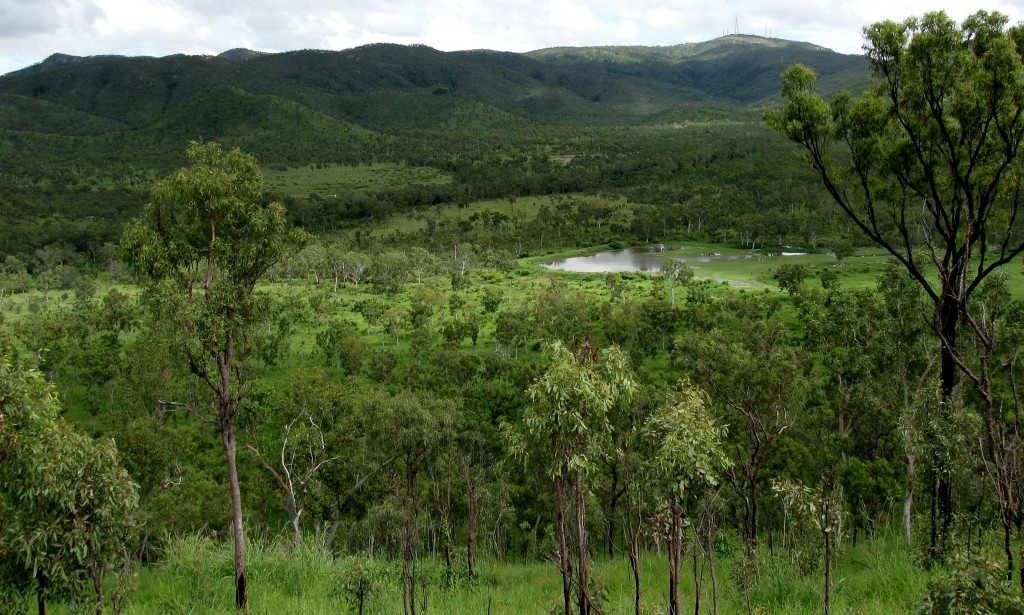 From the spine of the ridge, we looked out over a narrow, sweeping valley and green, conical hills beyond it. A few of the lower hills had buildings perched on their summits, making us envious of the landowners’ views. In the distance beyond the near hills, a massive, grey sheet that magnified by a hundred times the white sheet of rain that hit us at Cape Pallarenda hung in the sky, obliterating everything to the north and moving fast in our direction. We were in for some serious drenching.

Rain first spattered and then was hurled onto us like wet pebbles from the sky. We crouched beneath our umbrellas in the lee of a rock outcrop, and then, thinking of the water we’d seen earlier trickling down the hill and covering the ground near the creek, as well as the flood debris, realized we had to get down off the hill and back to the car as fast as we could in case of flash flooding. With clear visibility of 3 or 4 metres in the torrential downpour, we missed the spot where the ridge-top trail linked up with the path angling down the slope. After backtracking, but still not finding the path, we simply plunged down the rocky hillside toward the creek, dodging ankle-twisting rocks and slopping through the water streaming down the hillside and on the level ground near the creek. The water was already running deeper over the three fords we’d crossed en route to the reserve, with the pole marked in tens of centimetres at one ford’s side showing 20 centimetres covered by water.

For the rest of the day and into the night, Townsville and area cringed beneath a sky so thick with rain it was  like driving through liquid. This was the tropical monsoon low that had been hanging around offshore and finally clamped down onto Townsville in the wake of Tropical Cyclone Olga. If I had thought Townsville had received serious rain earlier in the week. I was wrong. This was serious rain.

While holed up in our abode during the evening, Vilis and I were intrigued by another bit of Australiana, this time gleaned from Townsville’s CityLife Magazine. Therein, we learned of Fashions on the Field, a fashion competition for both women’s and men’s events held in conjunction with horse-racing carnivals throughout the country. Originally instigated as a means of attracting more women to the racetrack (horse-racing now boasts the second-highest spectator attendance of any sport in Australia), Fashions on the Field has become an immensely popular event in itself. Townsville even has a racing wear boutique where fashion-conscious race-goers can buy everything they need – including jewellery and hand-made hats – to put together a one-of-a-kind outfit to wow the fashion judges and score big on the racetrack runway.2 Vilis has decided he wants to go to the races, and he wants to see that fashion show.