Notes on Eucalypts and Barra 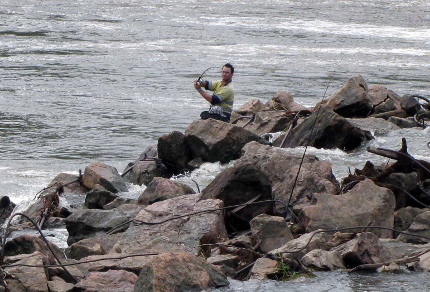 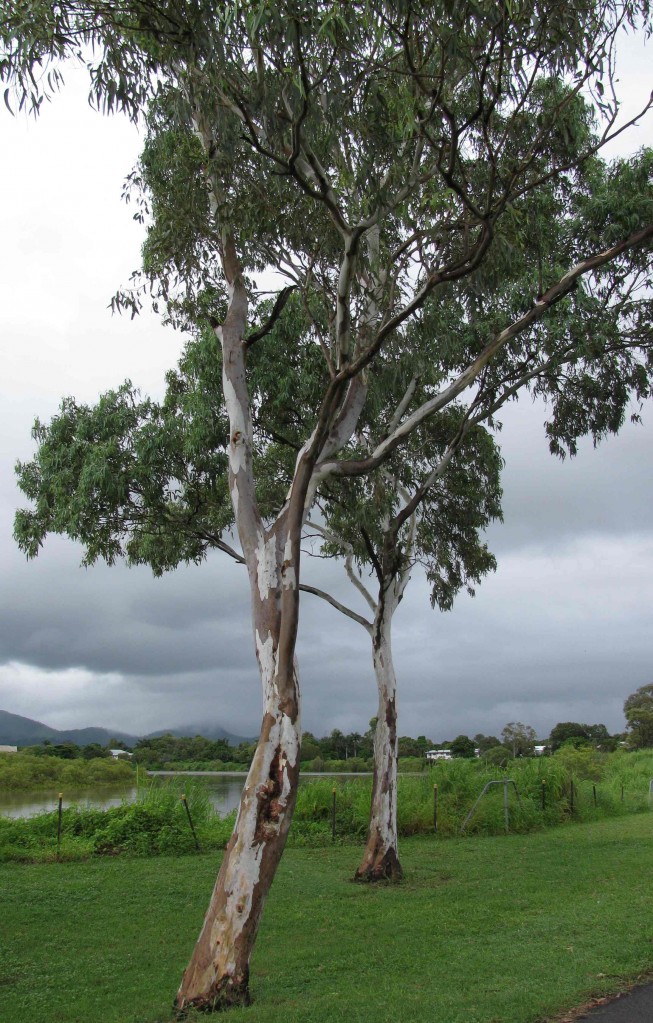 During breakfast, Vilis told me, “Yesterday, I heard an interesting program on the radio about eucalyptus trees. They are incredibly adapted for fire. They use it for competition with other tree species. When it’s hot out, some of the oil in the leaves gets into the air.”

I nodded, knowing eucalypt oils are extremely volatile. “The Blue Mountains. That’s how they got their name, from the eucalypt-oil-laden air.”

“So when there’s a fire, it can actually burn through the air.” He paused significantly before adding, “The flashpoint is 50° Centigrade.”

I was surprised. “That’s not very high. Victoria and South Australia and some places in Western Australia have been reporting temperatures in the low to upper 40°s. It’s no wonder they’ve had a catastrophic level fire risk.”

“Exactly. So eucalyptus trees engineer forest fires that kill off their competition.”

“And they survive the fires?”

“Yes. Studies have shown that they grow really fast after a fire.”

And humans get caught in the crossfire of this botanical war. A comment that Chris Johnson had made with respect to wildfires in Australia became perfectly clear. He’d  said that even a car’s exhaust can ignite a fire when there’s a catastrophic level fire risk. Australia has over 700 species of eucalyptus trees, which dominate the vegetation across the continent.1 When there’s a heat wave, those trees and their airborne oils are like powder kegs waiting for a spark.

The torrents of falling rain beyond our windows this morning would have doused any fire in Townsville. Equipped with a hat and umbrella and accepting the fact that my sneakers and more would get soaked, I skirted the golf club and headed for the Bowen Road underpass and the Ross River Parkway. Welcome swallows skimmed over flooded meadows near the bridge, diving down to the water surface to pluck up insects. The paths were strewn with leaves and flowers and many sections lay under a few centimetres of water. Rainbow lorikeets feeding in a bulky fig tree painted vivid figures against their backdrop of lush leaves and clusters of red fruits. From a distance, I heard the pounding roar of Aplin’s Weir, the top of which had stood high and dry last Friday when I cycled across the pedestrian bridge beside it.

At the weir, the river formed a thick, wide waterfall that roared over the concrete barrier and shattered into frothing rapids tumbling over and around huge, red boulders beneath the pedestrian bridge. There, young men and a pelican fished, the humans perched agilely atop boulders; the pelican cruising a short distance downstream.

I read in the Tight Lines column of last week’s Townsville Sun that, with water now spilling over Aplins Weir, anglers were catching barra that came over with it and taking them home even though the barra season doesn’t open until February 1. I thought, surely not barra as in barracuda. As it turns out, no, it’s barra as in barramundi, also known as sea bass. Barramundi are big, hard-fighting game fish not to be confused with barramundi cod or with a whole mess of other barramundi belonging to one particular genus of Australian fishes which are sometimes called that.2 Apparently, freshwater reservoirs  (such as Ross Lake) are often stocked with barramundi (which means ‘large-scaled river fish’ in an Aboriginal tongue) for the enjoyment of recreational anglers.2 The young men on the rocks, with their feet braced against the torrents of water, looked as if they were just as hard-fighting as any barra sailing over the falls behind them.