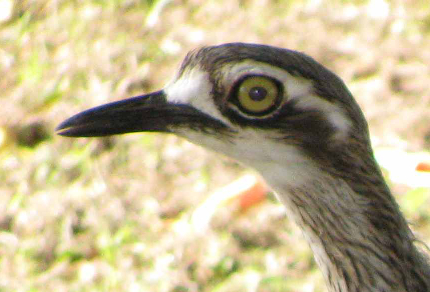 In mid-morning, Vilis and I met Chris Johnson in the biology building at James Cook University. Chris introduced Vilis to his office and showed us a map of Australia speckled with black dots. The dots represented research sites for a dingo project Chris and postdoctoral fellow Euan Ritchie have undertaken to document how dingoes affect biodiversity, and in a roundabout way, pasture quality on ranches. “We’re comparing ranches where graziers don’t control dingoes to ranches where graziers control dingoes. And most do.”

Dingoes, Chris told us, are top-level predators throughout most of Australia. When graziers control dingo numbers to reduce livestock losses, this action relieves the predation pressure on the dingoes’ natural prey species, particularly kangaroos. In response, kangaroo populations expand to the point where the macropods become pests. As well, introduced foxes and feral cats, which are kept in check by dingoes, increase in number and cause greater predation pressure on small, native mammals. All this results, as suggested by the data so far collected by Euan, in lower overall biodiversity on ranches that have dingo control in comparison with ranches that don’t.

In addition, graziers who kill dingoes may have their stock-protection strategy come back to bite them. Many graziers rotate pastures in an effort to “do the right thing and give pastures a rest,” Chris explained. However, once cattle and sheep are excluded from paddocks, kangaroos move in and “trash the pasture.” He concluded by telling us, “We’re hoping more graziers will start to think that, even if they lose a few cattle, it might not be a bad thing to have a top-level predator around.”

Leaving Vilis to acquaint himself with his office, Chris and I raced through a downpour to the shelter of the library, and then, when the rain eased, made a beeline for a small patch of shrubs near the library within which a male great bowerbird had constructed his bower. Built of hundreds of thin, dark brown branches arranged vertically and firmly enmeshed, the bower was about 30-40 centimetres tall, about 45 centimetres long, and had two parallel walls each about 15 centimetres thick. “It’s an avenue bower,” Chris explained. “See how smoothly curved the inside walls are?”

I reached into the bower and ran my fingers over the innermost twigs, which had been woven into the walls in such a way as to form a precisely-curved and polished floor and adjacent walls. Within the avenue lay a pile of large green seeds, a chunk of broken glass from a green bottle neck, and a small section of flat, green plastic grid. “The interior of the bower has only green decorations,” Chris told me. “At the entrances, the bowerbird places green decorations surrounded by creamy ones.” Chris picked up a snail shell to show me one of the latter, and I also noticed more shells, bits of old aluminium foil, and the pull-tab from a soda pop can arranged in a loose arc around green seeds spread in front of one entrance.

“Beside the bower, there’ll always be some pinky decorations,” Chris continued. “Always that fuchsia colour.” Atop a blanket of green seeds and a few pale oddments next to the avenue bower’s wall, a pink plastic spoon provided sharp contrast, as did fuschia-coloured plastic bottle lids and rings and purple bits of plastic. “Some of the bowerbirds will even paint the avenue walls,” my guide added. “They eat berries, mixing the juices with their saliva, and then spit it onto the walls of the avenue.” His voice was filled with the same passion he had exuded at his home yesterday when, with his hand over his heart, he described the moving experience of swimming in Lake Eacham in the Atherton Tablelands with shafts of sunlight shining down through the incredibly deep and clear water of the volcanic crater lake.

“Would the male be somewhere around here now?” I asked, hoping for a glimpse of the bower’s architect. “Oh, yeah,” Chris replied. “He defends his bower because other males try to steal his decorations. Of course, he tries to steal decorations from other males, too. The females make their choice based on how well a bower is constructed and the quality of the decorations. If she accepts a bower, the male and female will go into the avenue and mating will take place there. But, it’s her decision.”

After we returned to the biology building, I explored more of the campus grounds, spotting a pair of pale-headed rosellas feeding on grasses and herbs in a sunny clearing. The parrots’ white cheeks gleamed in the sunlight, their backs flecked with yellow and black like rich batik fabric draped over the birds’ smoky blue wings. 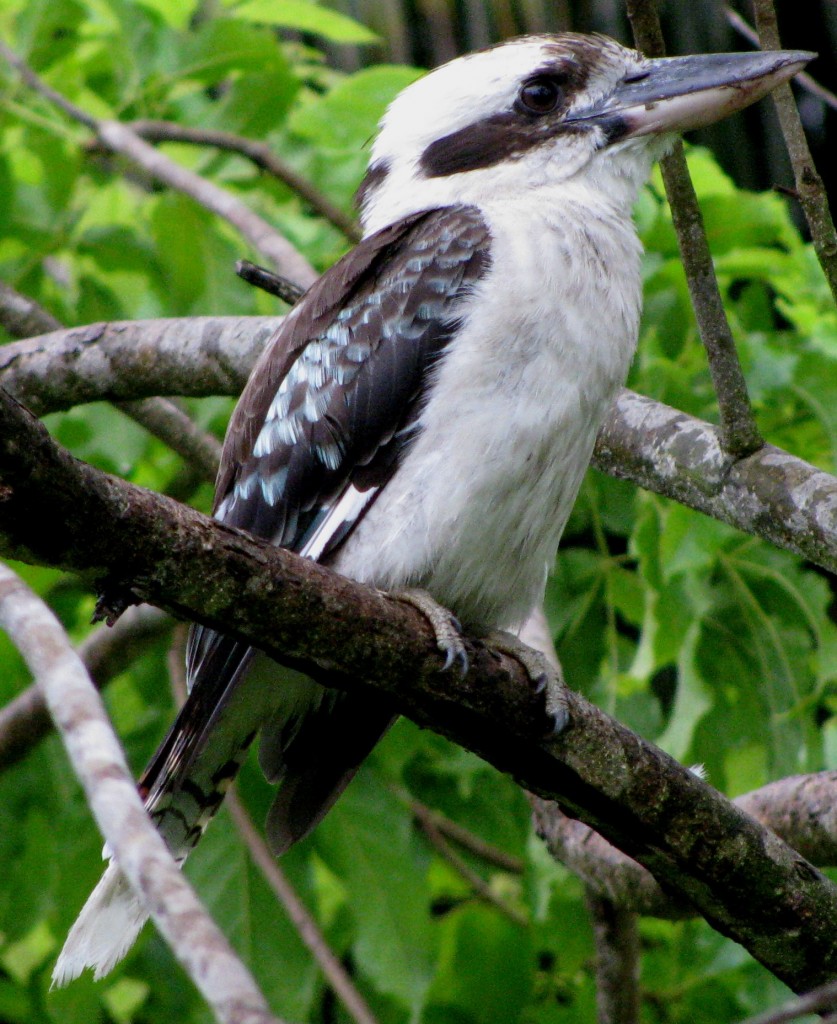 Laughing kookaburras with thick, chisel-like beaks perched in poplar gums – white-trunked eucalypts with rounded rather than pointed leaves  – and tore the air with wild, soaring “kook-kook-kook-ka-ka-ka” calls I recognized as the background jungle bird call in many an adventure movie set in the tropics. Australian brush-turkeys strolled the campus grounds as casually as chickens in a hen yard, one basking in a sunny clearing in the woods, its red head and neck outstretched on the forest litter, a black wing arched over its back. Long-legged bush stone-curlews – the tall, grey-and-white birds Vilis and I spotted at the campus on Thursday – stood motionless or moved with slow-motion strides across the grounds. They made me think of skulking private investigators who supposed they were rendered invisible by their streaky grey and white plumage. When they called out “cur-lew!” their voices projected a clear yearning, as though the murder mystery would never be solved. 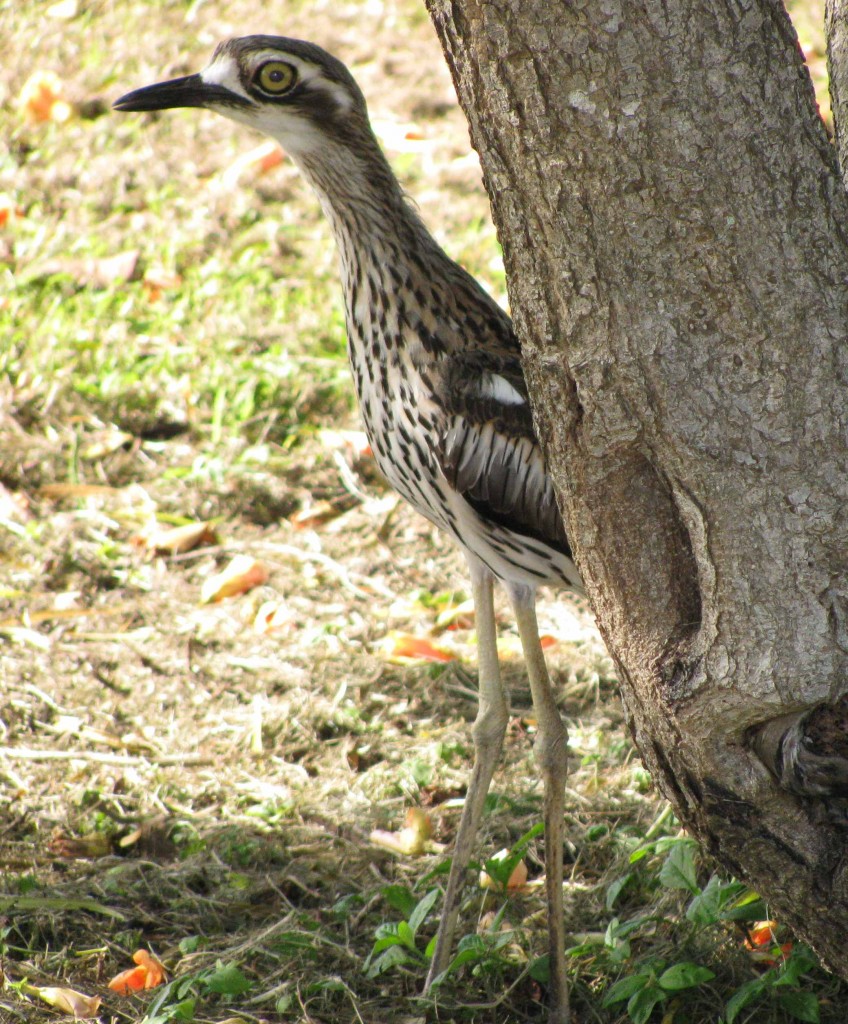 In creekside shade, the morning’s warmth felt sweet and enticing, but the approach of noon brought searing heat in open glades. Under the bald sun, a diminutive double-barred finch pecked and scratched at sandy soil, its white face surrounded by a black ring of feathers causing it to look as though it had been daubed with face paint for a pantomime.

I sought the shade bathing a picnic table, and from its shelter observed black-chinned honeyeaters with olive backs and blue eye-crescents dipping their beaks into red flowers on spiky inflorescences that splayed out like long fingers among the dense, glossy leaves of an umbrella tree. A flock of rainbow lorikeets joined the honeyeaters, causing the noise level to jump a few decibels as the rowdy nectar-feeders screeched and scrambled among the branches. The boys were back in town.

Later, in the Commonwealth Bank of Queensland, where we were in the process of opening a bank account, we were told by a confident young bank manager that cheques are obsolete and that in Australia, 4-year-olds have mobile phones. Fortunately, Vilis had purchased a mobile phone yesterday, so we didn’t look like complete idiots.

With bank cards and a letter from the bank in our hands, we next proceeded to the public library, where, in possession of some proof of our residency, we were eligible to receive library cards. I stocked up on guides to wildflowers, native plants, snakes, goannas, and texts about koalas and the platypus. As we left the building, Vilis commented, “It takes a lot of doing to set up a life in another country.”

Ah, but in this country, which I have yearned always to explore, there is so much I want to see, to learn. Alfred Russell Wallace spent 8 years exploring the islands of the Malay Archipelago to the north of this continent, and in doing so, discovered the remarkable fact that the placental mammals common to southeast Asia – the monkeys, tigers, and elephants, for example – did not exist at all on the islands to the south and east of Java and Borneo.1 On those islands, he found only marsupials such as kangaroos and cuscus.1 The bird life, too, was altogether different in these two regions.1 Upon further investigation, he determined that the separation line between the two sets of faunas was a deep oceanic trench between the islands of Bali and Lombok, only 20 miles distant from each other.1 He surmised that Bali, located in shallow continental shelf waters, had once been a part of continental Asia, while Lombok, located is deep, offshore waters, had once been linked with other southern islands, including the landmass of Australia.1 In time, Wallace extended this boundary between Asian and Australian faunas northward between Borneo and Sulawesi, and then northeast to pass just south of the Philippines.1 It became known as Wallace’s Line, and to me has always held a certain scientific magic. I stand to the south of it now, in awe.

1. Sean B. Carroll. Into the Jungle: Great Adventures in the Search for Evolution. 2009. Pearson Education Inc, San Francisco, California, pp. 44-47,